Full disclosure: A preview copy of Sovereign Skies was provided by Deep Water Games. Some art, gameplay, or other aspects of the game may change between this preview and the fulfillment of the Kickstarter, should it fund, as this is a preview of a currently unreleased game. Also, while I don’t charge for Kickstarter previews, the publisher was charged a rush fee due to the tight timeline they needed the review completed in.

Alright, we’re back on Kickstarter! After, you know, a one-week break. Very serious lapse, timewise. Thankfully, we’ve got two new Kickstarter games to talk about. One’s an expansion to Assembly, and the other is the first of Deep Water Games’s original titles, Sovereign Skies! Naturally, that’s exciting, and the art is impeccable, so it caught my eye pretty quickly. Let’s dive right into it.

In Sovereign Skies, you play as sovereign houses within the newly-formed Planetary Senate along the Edge Planets. Naturally, since it’s new, you can probably get in there with the right people and bend it to your will. Or promote democracy. There’s no reason it can’t be both things, you tell yourself. Either way, hop on your mothership and get ready to amass some power. Will you manage to rise above your opponents as the most influential house in the stars?

Setup is a bit involved, so stick with me. First, set out the planet tiles:

Shuffle them beforehand, of course, but they will form the game board. Now, you’ve got Base Influence (for activating bases):

Split them up by color and sort them so the highest value is on top (Orange is 9, Purple is 7, Green is 5). Place them on the Base Influence Mat:

Place them on the Politic Influence Mat; this time, the order doesn’t matter.

Each planet has their own Politic Cards; separate them out and place one per player face-up in a stack in the indented part of the tile:

Give each player 3 Energy and put the rest in a pile:

Set the Standard Influence tokens aside, for now:

Have each player choose a player color, and take the Mothership in that color:

I imagine those aren’t the final version, but they very much remind me of FlickFleet. Take the ships in your color, too:

Take a Player Board: 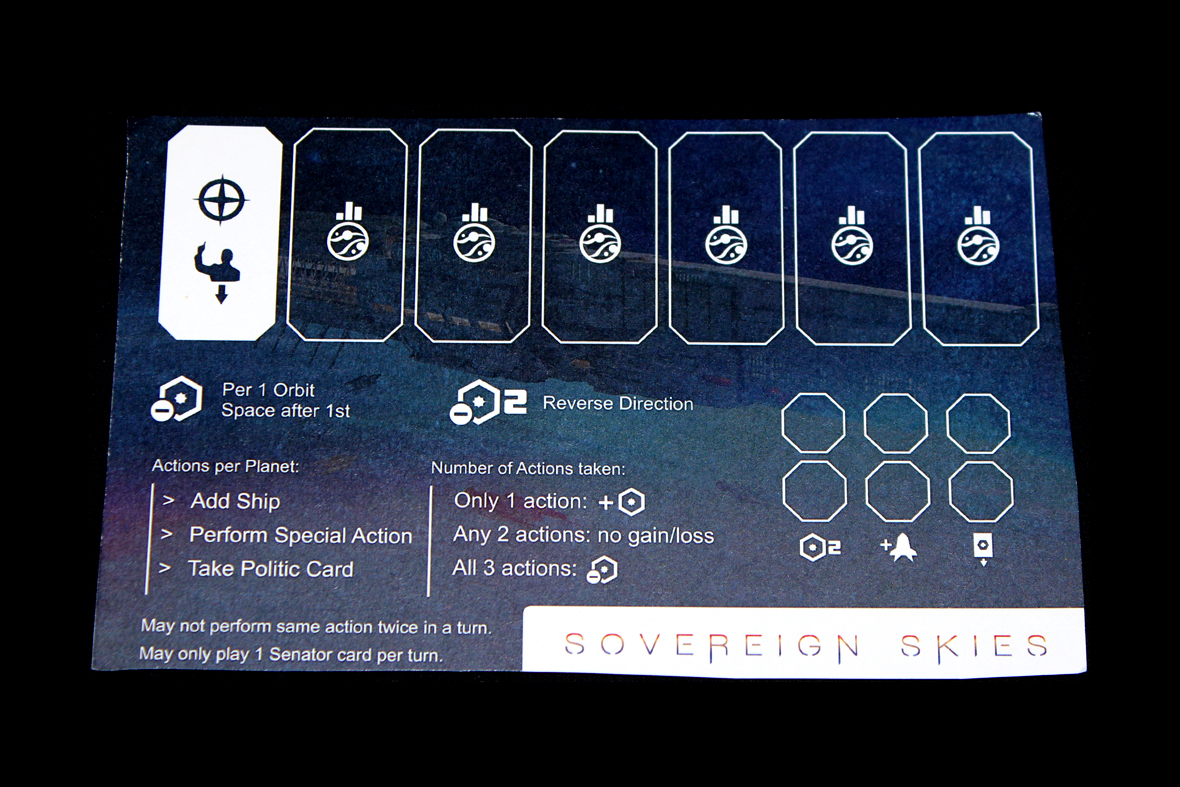 Now, take the bases and put them on the six spots on your player board for bases, Active side down:

Determine the player order, and also your starting ships. You do the latter by shuffling the Senator Cards and flipping one face-up per player. Each player puts one ship on the two planets indicated in the top-left of the Senator Card:

Then, take all the Senator Cards (including the ones you dealt out) and reorganize them by the number of dots in the top-right corner. There should be three stacks; shuffle them and place them above the Senator Influence Mat: 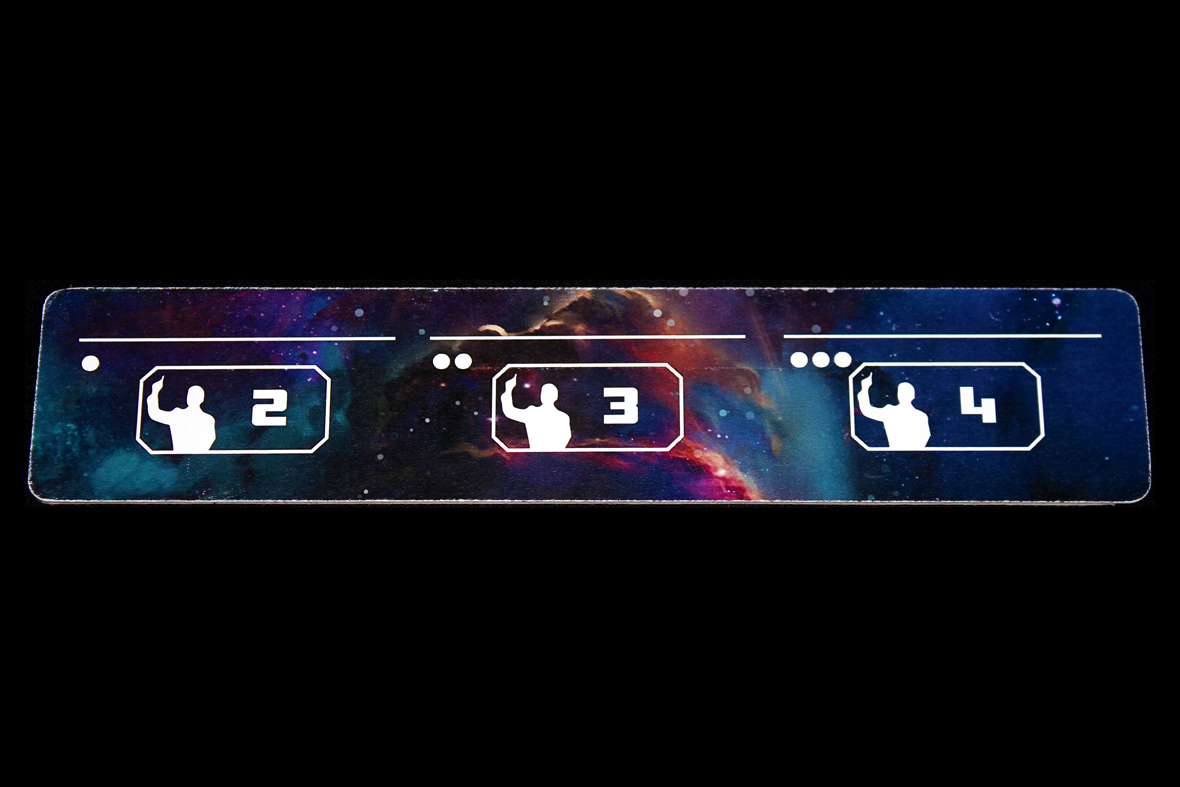 Going back to ships, players must now, in player order, add one ship to any planet that doesn’t already have one of their ships. Once you’ve done that, in reverse player order, each player must place their Mothership on a planet with no Motherships facing either clockwise or counterclockwise.

That’s the last step, so once you’ve done that you’re ready to start! 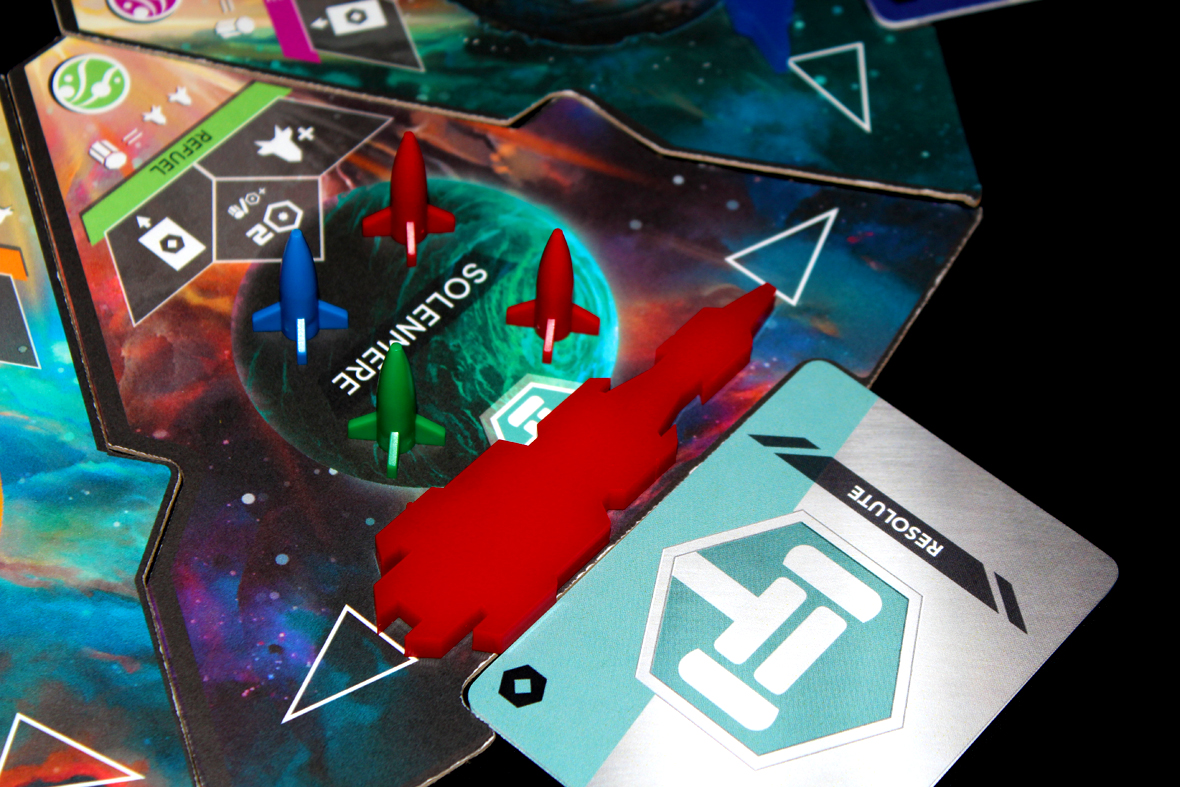 So, your goal here is to gain influence throughout the galaxy by moving between planets, performing actions, and gaining favors from Senators (as one does). Along the way, your control of planets will be contested by other players, so you’ll need to make sure you can take what’s yours. Do that, and maybe the galaxy will look to you for leadership? Or at the very least you’ll get the “local” discount on more than one planet, so, I mean, that’s also nice.

On your turn, you’ll first move your Mothership and then perform up to three actions. To move your Mothership, you move it one space in the direction it’s currently facing. If you’d like to reverse it, you may turn it around for 2 Energy. If you’d like to go further, you may spend one Energy per planet tile to move additional spaces. Unlike the beginning of the game, multiple Motherships may be on the same tile facing the same direction. 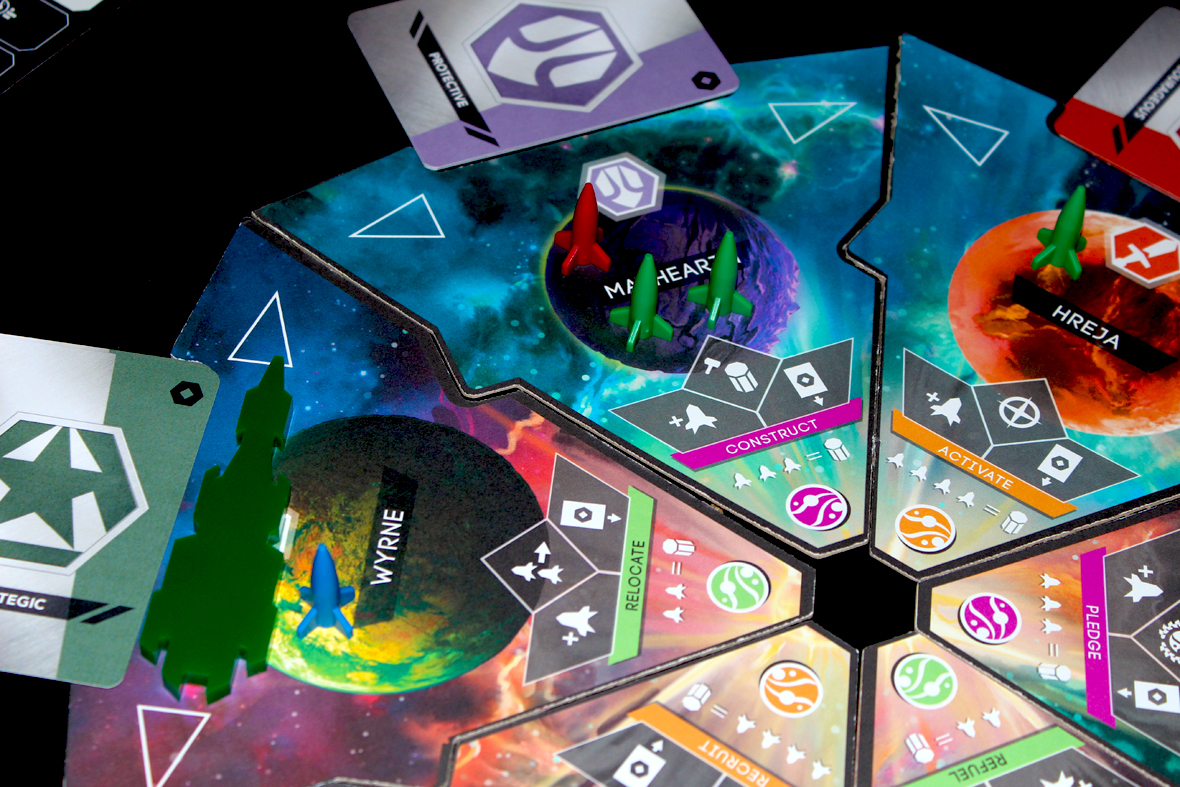 Additionally, as a free action, if you’ve Recruited a Senator, you may call in a favor with one of them per turn. They generally allow you to do slightly-limited versions of the special actions:

The game ends when any two stacks of Senator or Base Influence Chits run out. When that happens, finish the round so that every player gets an equal number of turns, and then tally your scores:

So I’m gonna get weird, here, which is exciting. I’ve tried it at 2, 3, and 4 (which is surprising; I had a really good Monday). At 2, I felt like the board was a bit empty. The other player and I carved out our three planets, nodded sagely at each other, and generally got within about two points of each other. Very pleasant. At 4, it was almost hard to see everything that was going on between ships and bases and active bases, so some players were missing things like majorities or tokens or things they should grab. Personally, I’d love to see smaller / larger boards for those player counts so that you can scale the game, but I’m also not a designer so I’m not sure how feasible that actually is. Either way, that makes the game sit pretty comfortably at 3, in my opinion. There’s enough that players likely won’t be fighting too much over control of planets, but there will be some contesting, which is good for everyone. It also prevents the game from getting too tit-for-tat, as I feel like it does at two players. That’s not to say I disliked either of those modes, but I definitely have a solid preference for this one at three players. I’ll be interested to see how much the game changes via the Kickstarter process and whether or not some of these pieces of the game are tweaked, though. Who knows how it’ll turn out? 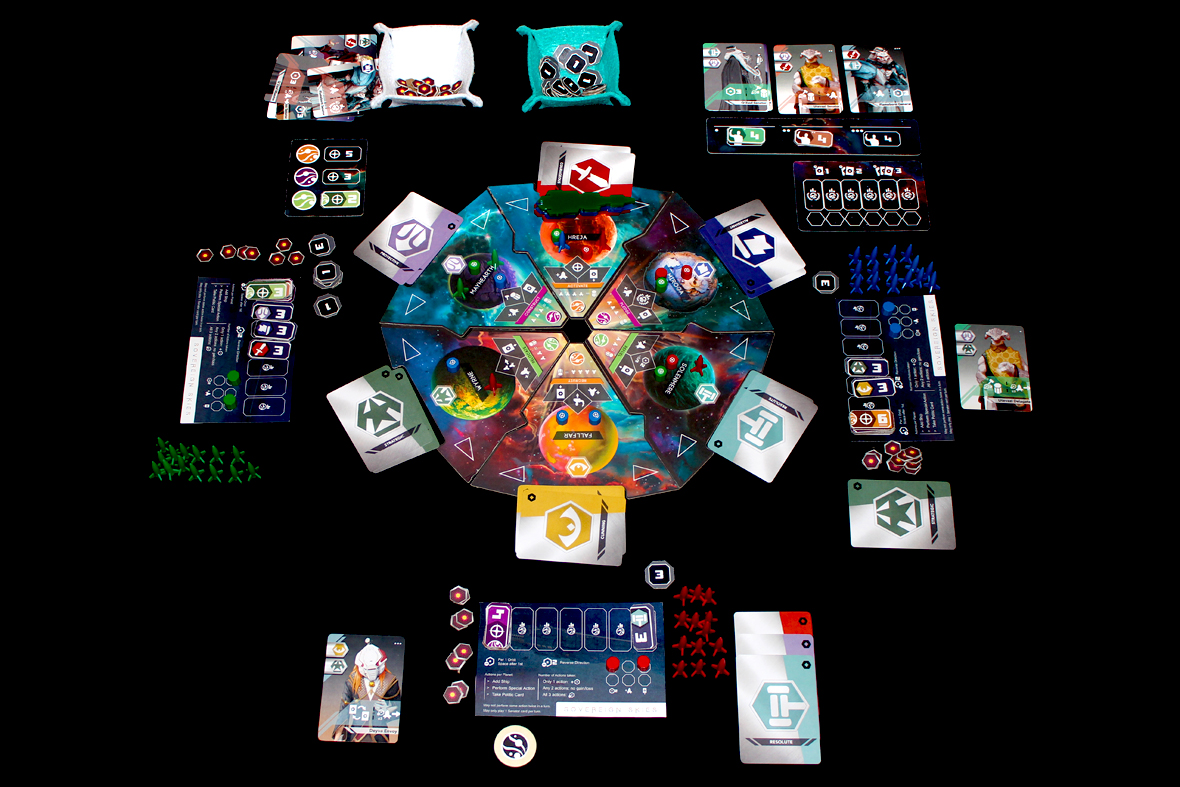 Overall, I’ve had fun with Sovereign Skies! This is one of those places that I get a bit confused by Kickstarter games, though. The core is interesting, but it makes me want to see expansion content to change up actions or add more interactions to keep the gameplay variable, and I’m not sure if that’s on the roadmap or not. If it is, awesome! Looking forward to it. If it’s not, well, that’s okay, too. Either way, this game’s got a fair bit going for it, especially in the art department. It’s lighter than the other “move ships in a circle” game that I’ve played, Sol: Last Days of a Star, but I think I like Sol’s depth for what it’s trying to do. That one focuses much more on building paths rather than area control, anyways, and this one’s got the area control part down pretty well. I do appreciate how you have to gradually upgrade your stuff to stay competitive, but it can start to feel repetitive if you get into a groove and just kinda keep executing that pattern for the rest of the game. I’d even appreciate something that causes the planet orderings to be switched around, to keep that from happening, but I’m not sure what that would do to the game proper. I think that this game does take a full play or so to “get”, as everyone I played with noted that they better understood the game after playing it once and seeing how everything ended up shaking out, so make sure to keep that in mind, as well. That also tracks with me, as I generally enjoyed the game more as I played through it. Either way, if you’re looking for a game of orbiting, influencing, and politicking, Sovereign Skies might be for you!