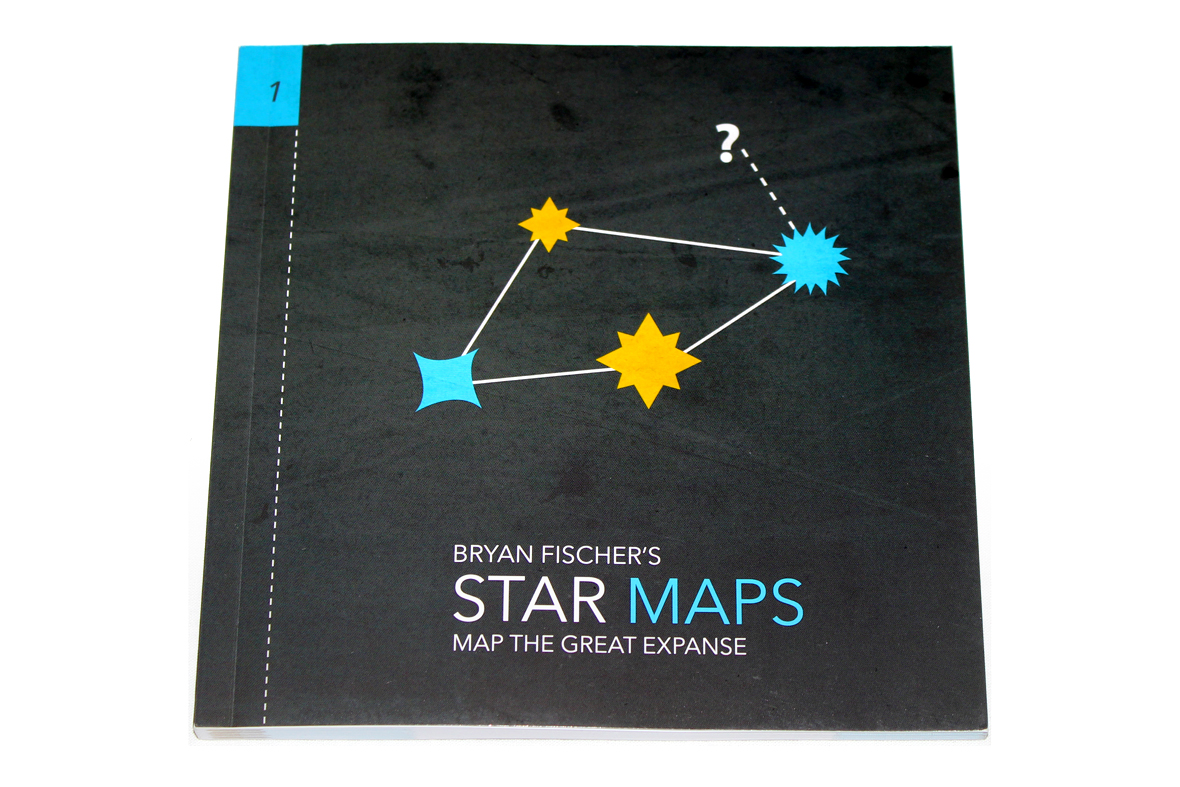 Full disclosure: A review copy of Star Maps was provided by Button Shy.

Alright, time for another potential month’s theme: roll and write games! Specifically roll and writes, since we lack an industry standard for flip and fill / draw and draw / whatever games. You already saw Lanterns Dice: Lights in the Sky from two weeks ago, and this week we’ll be checking out a roll and write game from … Button Shy! This is a mild surprise, because before maybe a couple months ago I assumed they really only sold wallet games, but they also have these roll and write campaign booklets. Naturally, Star Maps seems interesting, so let’s check it out.

In Star Maps, you play as astronomers who seek to chart the skies, but your telescope only works so well. You’ll have to see where you can catch some glimmers and views if you want to do the best job charting the cosmos around you. Which of you will end up the superior cosmologist?

Not much. Tear a sheet out of the book for each player: 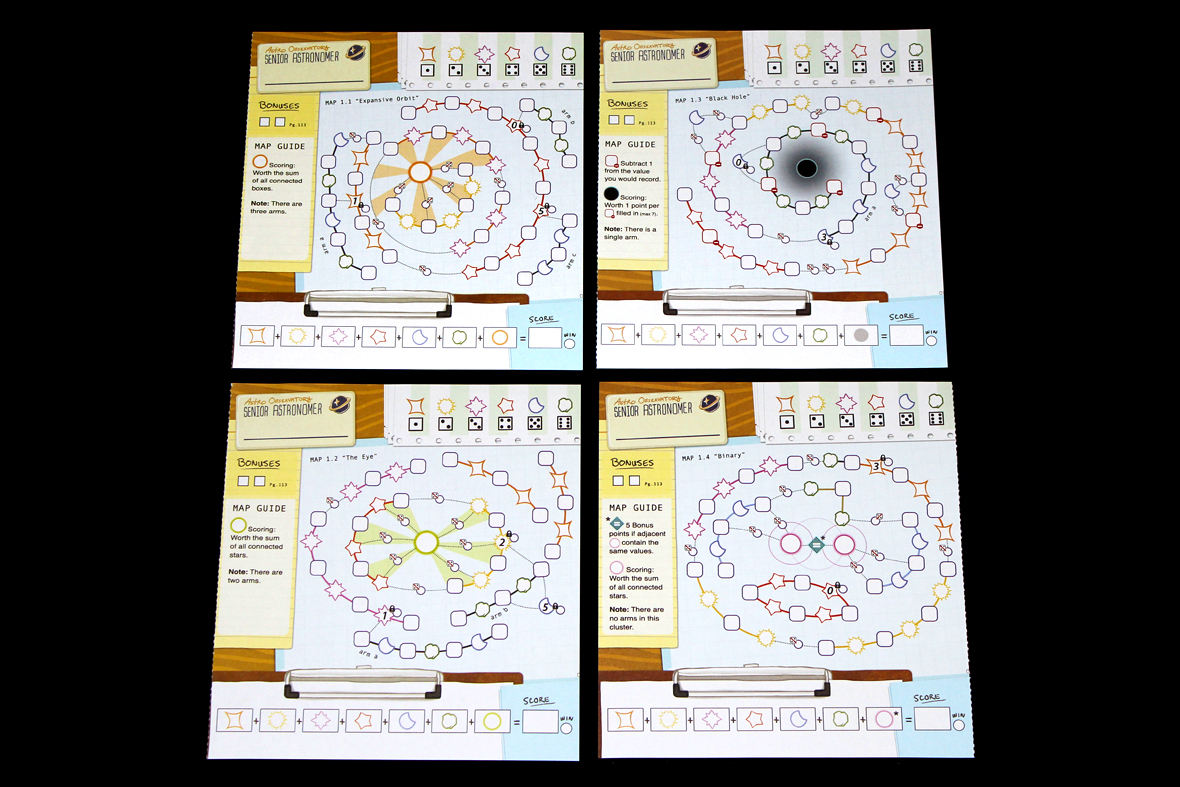 Make sure, preferably, that they all share the same layout. Once you’ve done that, make sure you have two d6s, and you should be ready to start! 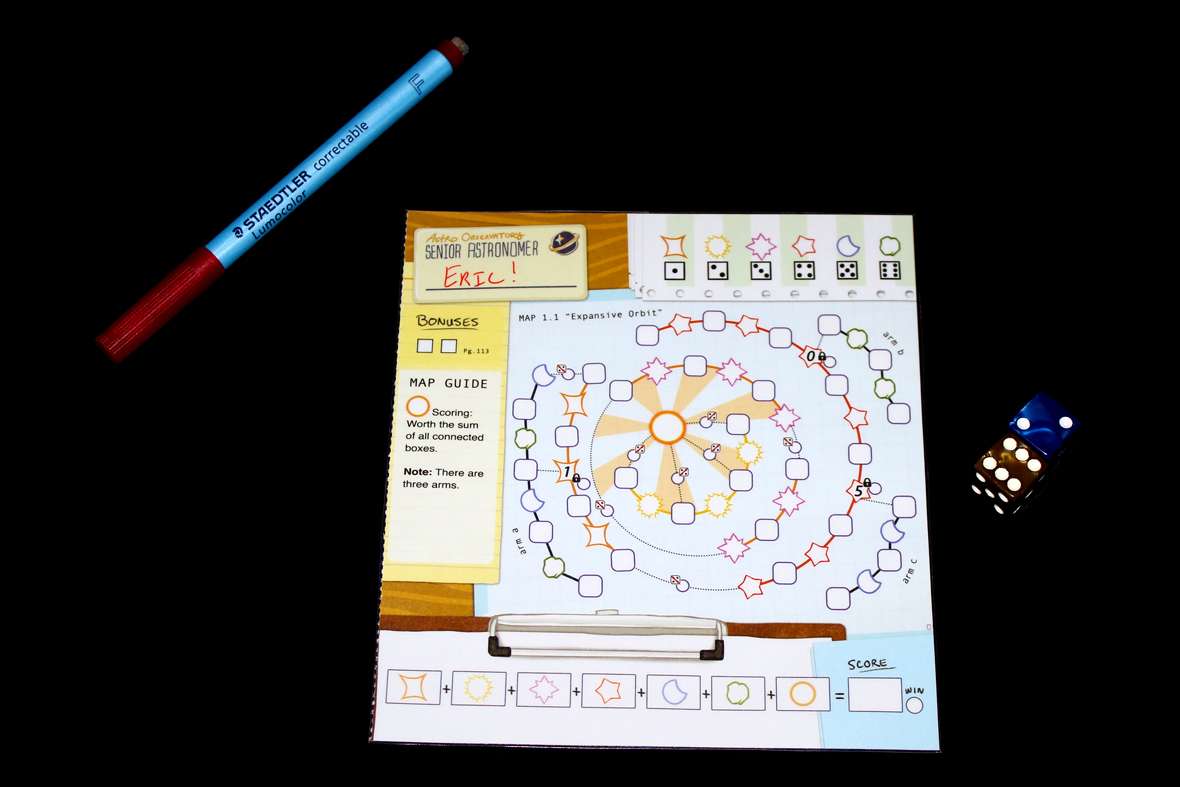 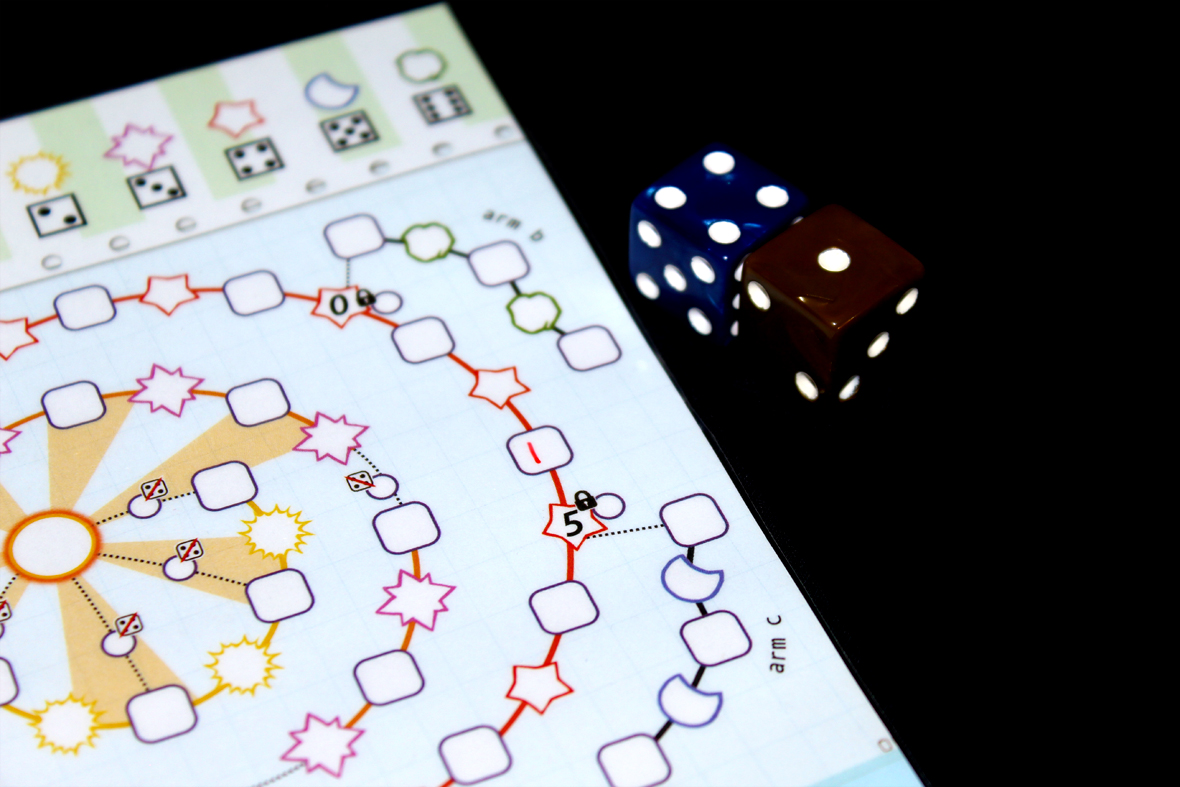 Alright, so, as rounds progress, you’re going to be rolling dice and filling in squares to try and discover stars, earning points for your discovery. Once any player can no longer play, the game immediately ends and the player with the most points wins! Let’s dive right in.

To start a round, roll both dice. You may write or ignore the roll. If you choose to write, choose one die. That die indicates a color of star. You’ll write the other number in a box adjacent to that star. Note that if a box is connected to that star by a broken line, it is only considered adjacent if the circle on that line is filled in. 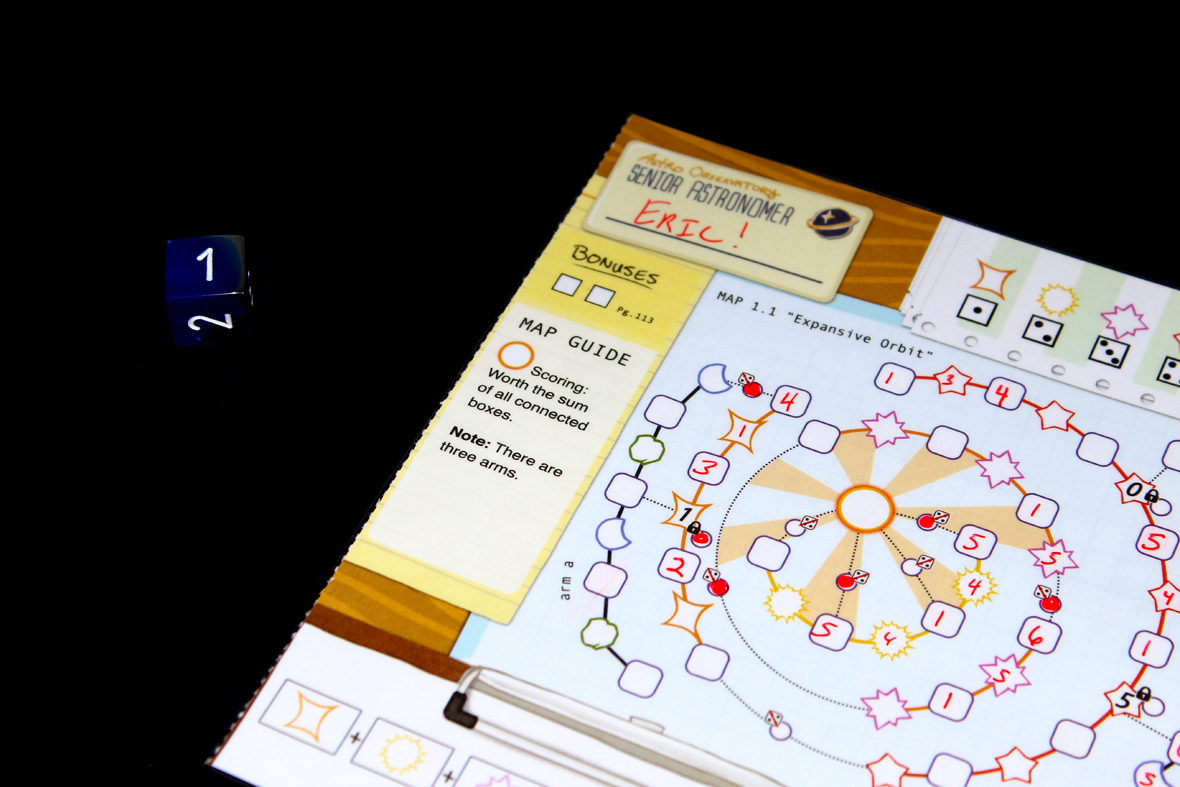 If you fill in both squares on either side of a star, fill the star in with the difference of those two values (it must be positive or 0). You’ll score that many points later on. Certain spots have a number pre-written; you only score those points if you can get the numbers set up so that they yield that number.

Certain spots (known as “arms”) only count if they’re connected by the end of the game. To connect them, you’ll need to fill in the lock circles, which usually requires also making sure you get one of the pre-written stars completed, as well. There are other ways to fill in the normal lock circles, however. 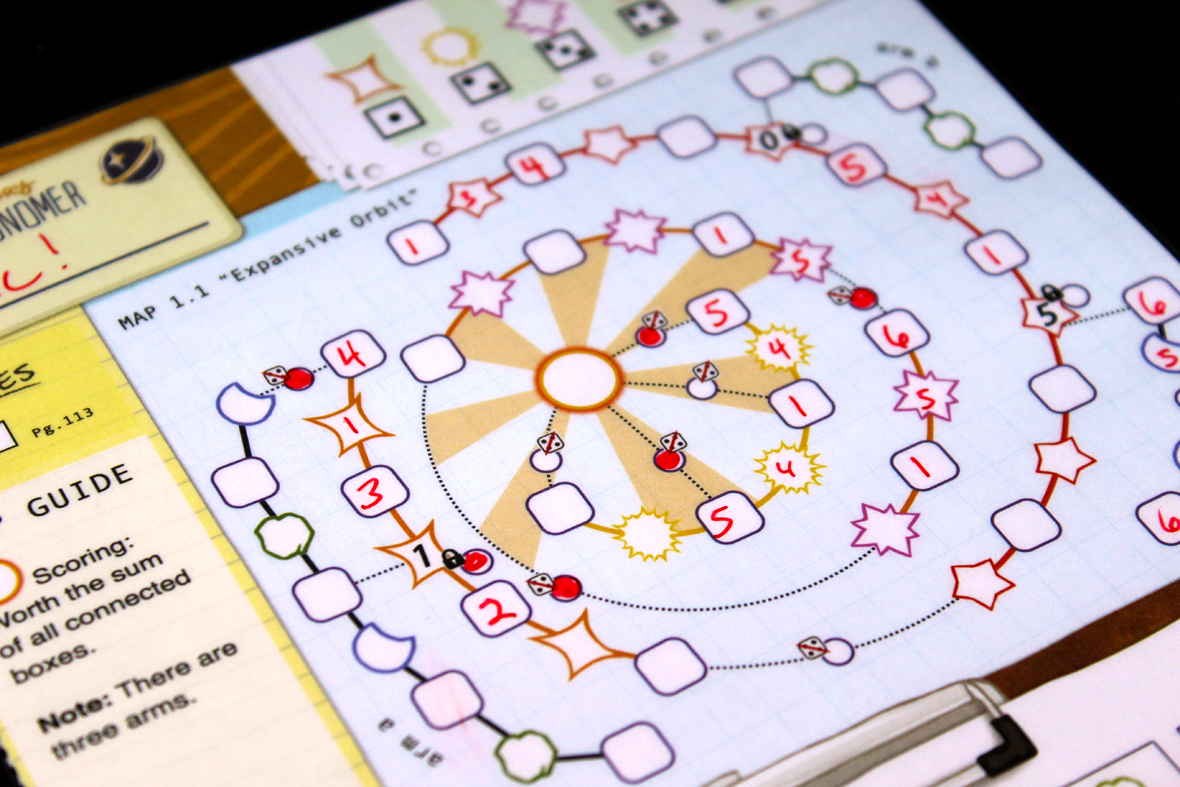 If you choose to ignore the dice roll, you may fill in any locked circle that’s not adjacent to a star with a printed number. This will allow you to connect arms, as well as occasionally suns or other cosmic bodies.

If, at some point in the game, you manage to fill in every star of a color, you unlock a bonus! Cross out one of the bonus boxes and take any bonus from the bonuses page in the book. If none have been filled out yet, well, then you get no bonus! Sad. 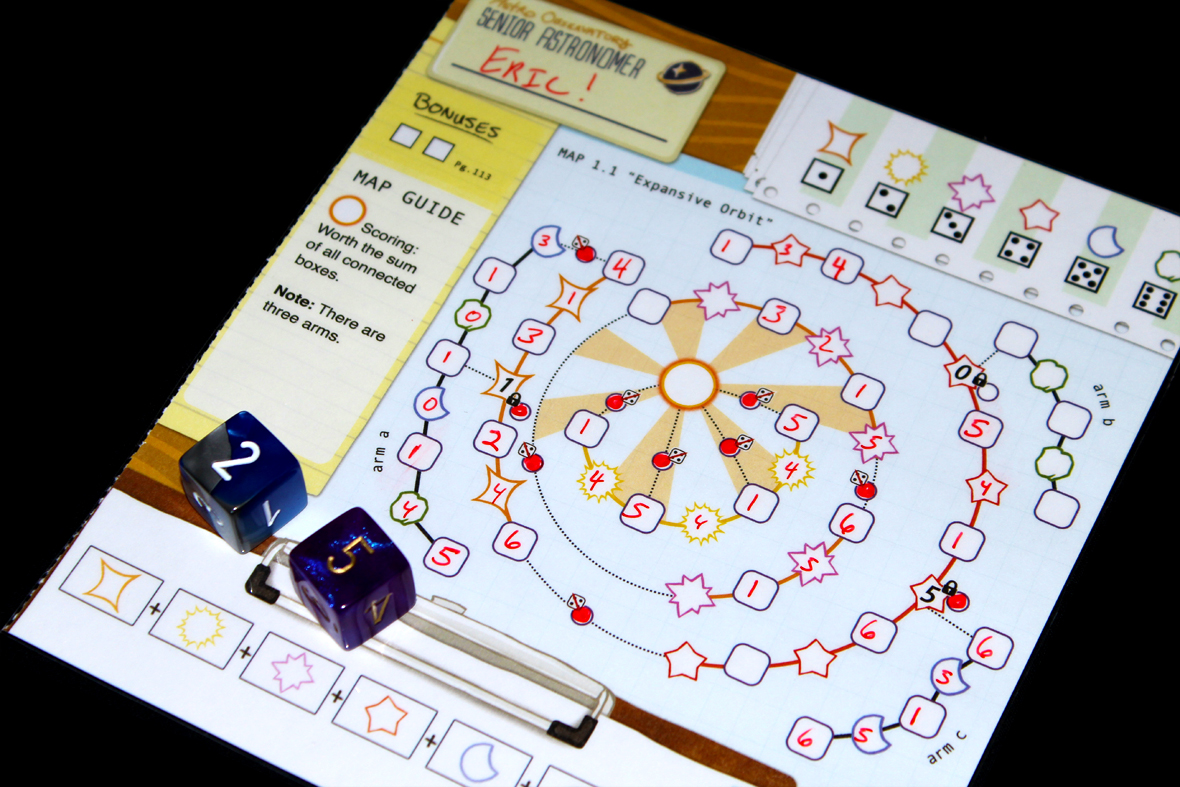 Once any one player is unable to play, the game immediately ends after that round! Total the values in your stars and write them in the corresponding spots on your player board. Remember that arms that haven’t been unlocked cannot be scored. Also note that every board has a different unique scoring condition; make sure to include that as well. The player with the most points wins!

But the game doesn’t end there.

The winner can turn to the Star Chart and name one of the stars, and then either draw a line between any two stars to form a constellation, or improve your Observatory, allowing you to discover new stars in subsequent games. 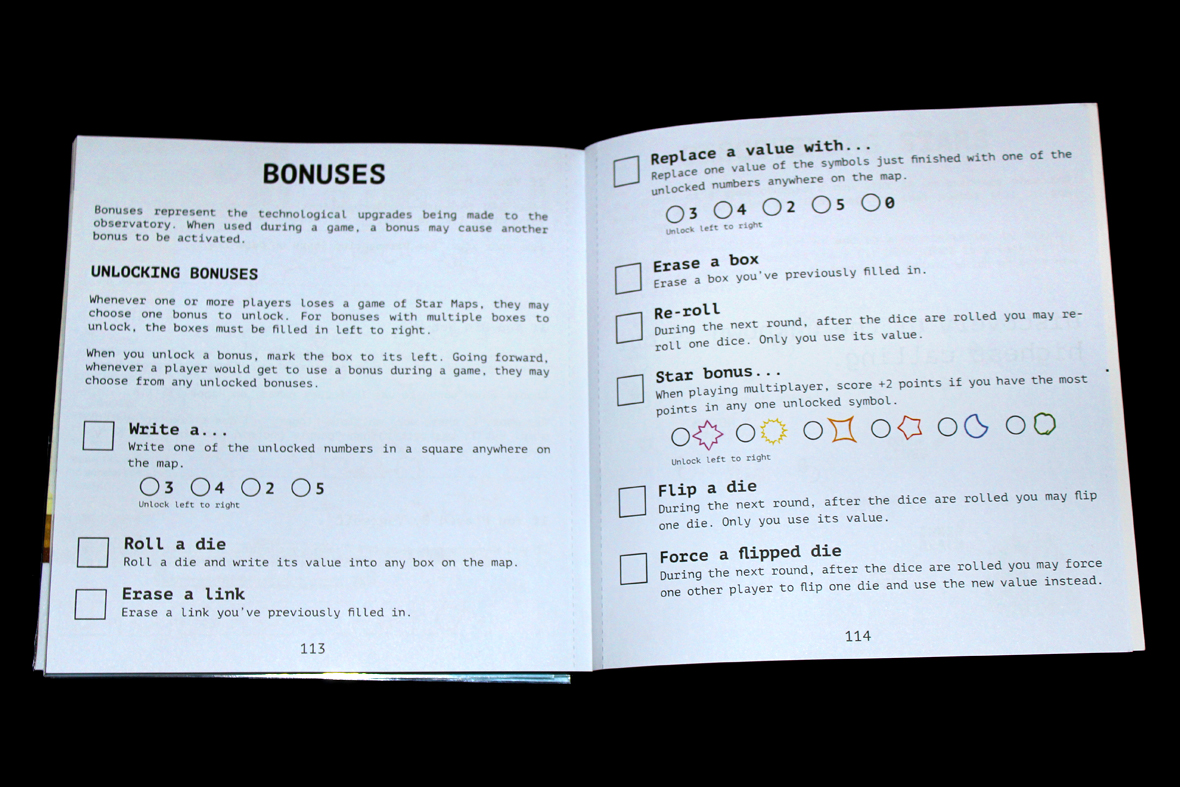 And the loser(s)? They can collaboratively unlock a bonus for all subsequent games. Now you can get bonus die rolls, write in new numbers, whatever. The sky is the limit, provided the bonus is an available one.

Not really any. Some of the bonuses allow for more player interaction, but I’m not planning on ever unlocking those, to be honest; I like the pleasantness of players just doing their own thing until one person can’t. I suppose at higher player counts it becomes harder to track how other players are doing, so you might be on the receiving end of a nasty surprise if the game ends before you unlock an arm. Solo, you just play to beat the suggested score, so there’s nothing particularly special there, either. Either way, I don’t have a strong preference for player count in this game. 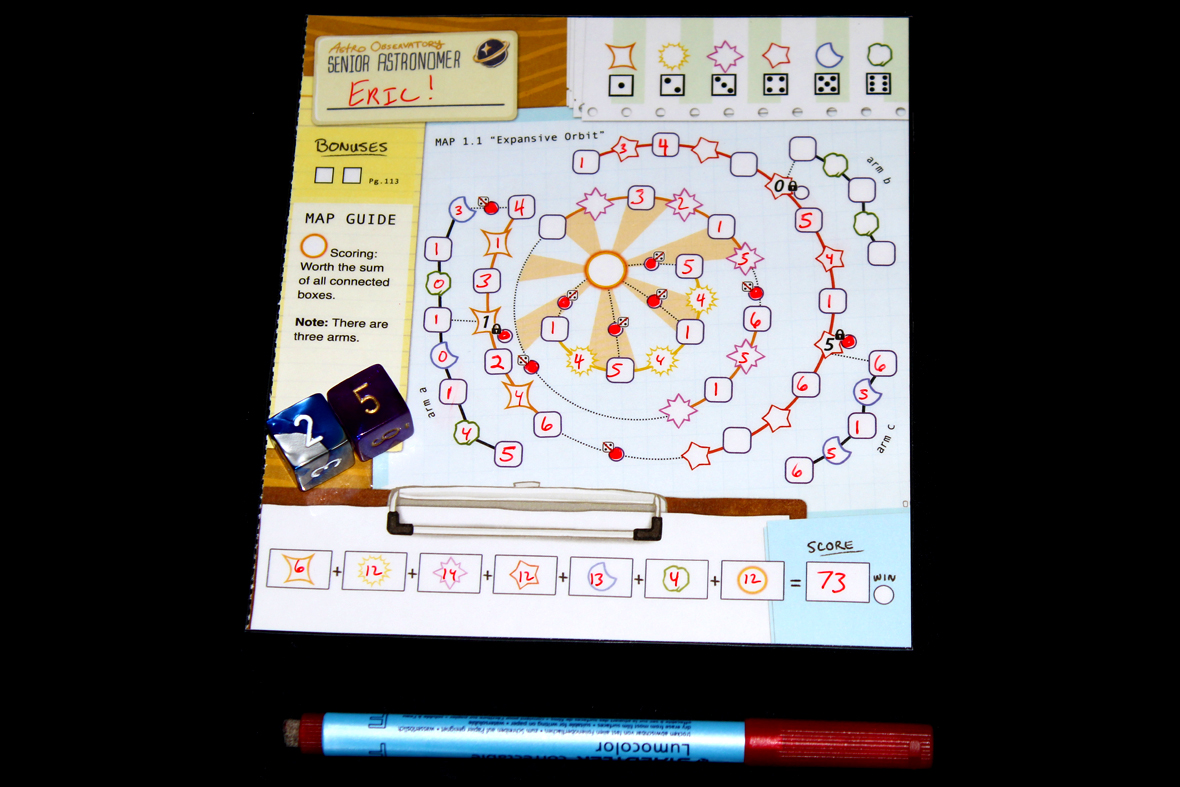 Overall, Star Maps is rapidly becoming one of my favorite roll and write games! I think that I just happen to find the puzzle super interesting, and I like that it has multiple different boards to allow for a few different games. Naturally, I am also a big fan of the theme; as I mentioned, I really enjoy the kind of somber, meditative mood that the space games with no colonization / empire-building component create. Add in a neat campaign component and you’ve got yourself a fun little book of roll and write games! I particularly appreciate that you can also get by without dice if you have a dice rolling app, so you can really kick back and just fill out the whole book if you so choose. For me, it’s the perfect length, the perfect level of intensity, and the perfect level of complexity; I just wish it didn’t end so abruptly, especially if I’m still trying to put together a perfect combination. Either way, I’m a big fan of Star Maps, and if you’re looking for either a solid Button Shy game or a solid roll and write title, I’d definitely recommend checking this one out!