Full disclosure: A review copy of Cover Your Assets was provided by Grandpa Beck’s Games.

Hey, the last of this run of Grandpa Beck’s Games. I’ve covered two, already (Skull King and the first edition of The Bears and the Bees), and this will make three. I’ll likely try to do more in the future (Skull King is part of a trilogy of card games, so I’m hoping they end up bringing the other two over from Europe), but for now I’m looking at Cover Your Assets, a game about high-value stuff collection and, of course, its inevitable theft. Let’s dive right in.

In Cover Your Assets, you play as people who enjoy the finer things in life. Fancy cars, stocks and bonds, the idea of owning a home; all things that are somewhat out of reach, lately. But enough about the skyrocketing price of homes in the Bay Area; this is a game review. Your opponents are building up little nest eggs as well, and while that’s all well and good, you’d much rather their things be … well, your things. And you think you know how to pull that off. Naturally, they feel the same way about your stuff, so only one of you will end up rich. Who’s it going to be?

Nothing to do, here. Shuffle the deck: 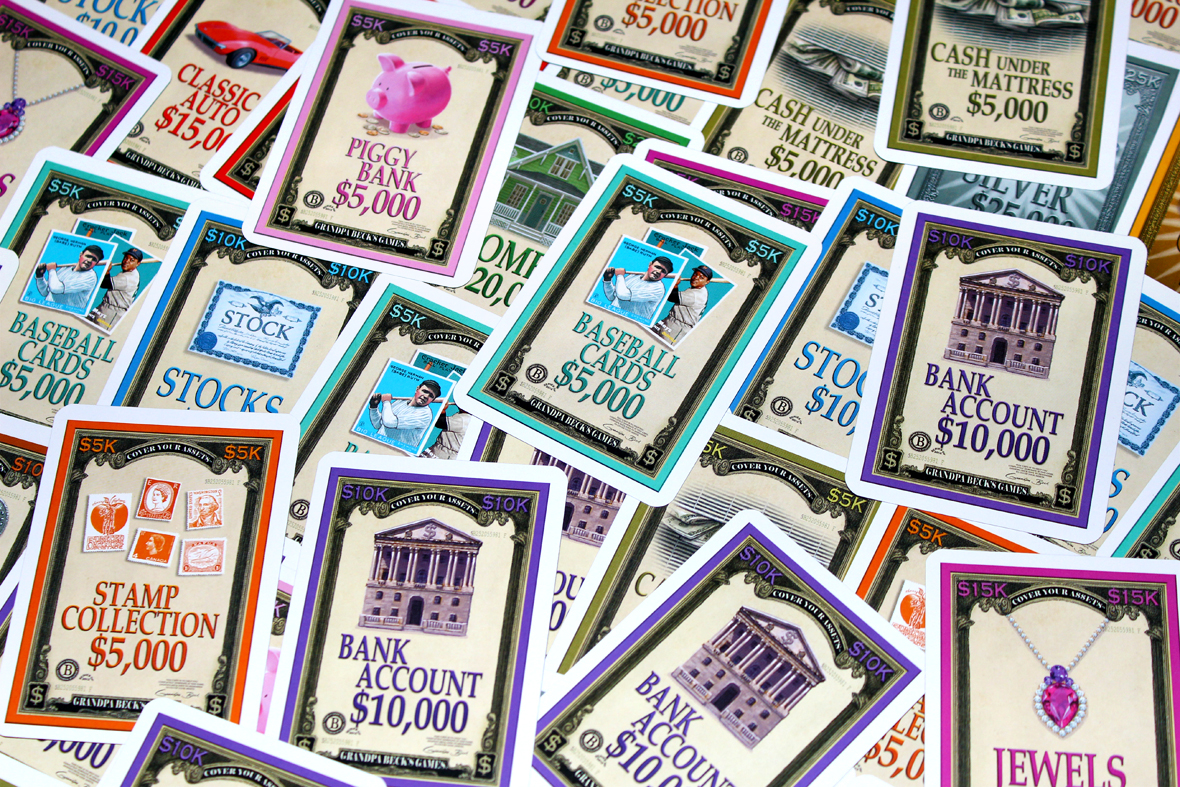 Flip one card into the discard pile; you’re ready to start! 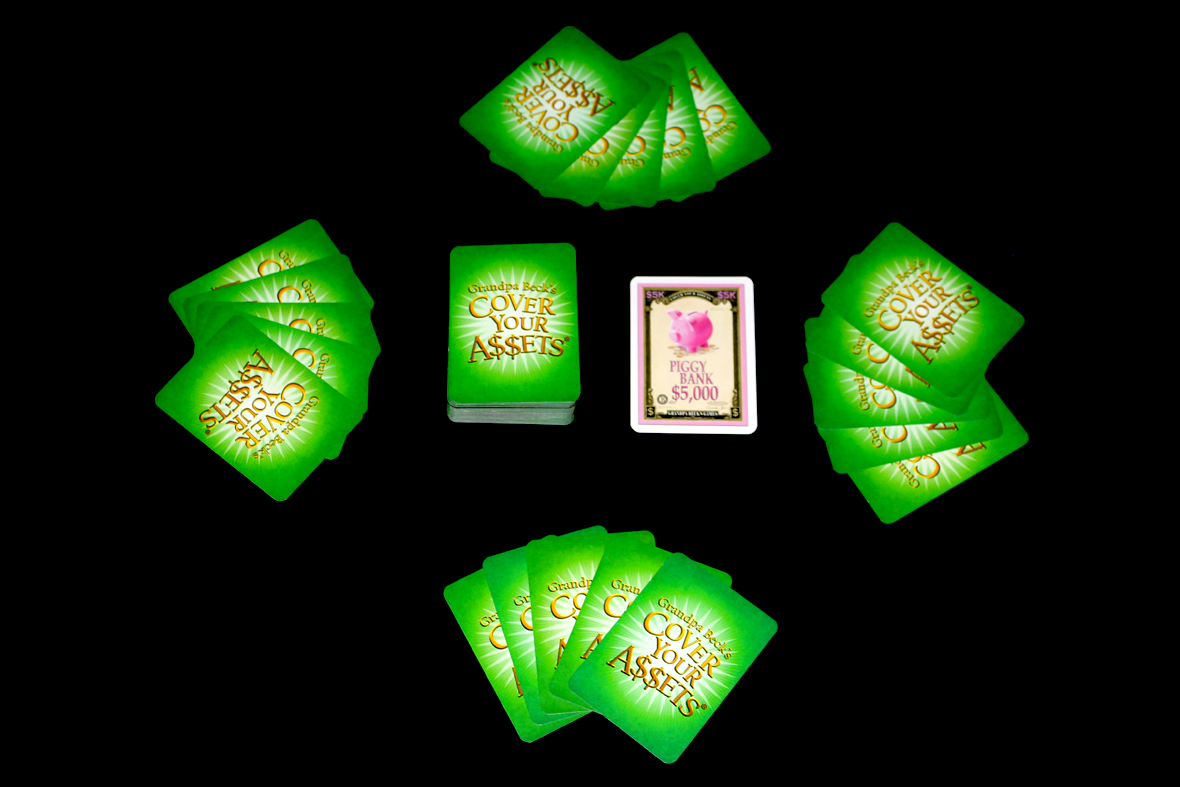 Cover Your Assets is all about making money and hiding it from your opponents. How do you do that? Well, you create pairs of assets. Doing that allows you to build up your wealth, but be careful! Other players may try to steal it from you, if they can. The player with the most money wins, or you can try and complete the Millionaire Challenge, where the first player to $1,000,000 wins!

On your turn, you may take one of four actions. I’ll outline each in turn.

If you have two of the same cards in your hand, you may make a pair of them and place them face-up in front of you in your Asset pile. If you already have Assets, place the pair perpendicular to the other pair. Note that wild cards (Gold / Silver) match any card, so they can be used to create a pair. Just, put the wild card at the back so that you can be secretive about it. More on why, later. Some rules:

Once you’ve done this, draw back up to four cards in your hand.

You may do the same thing as Make a Pair – Hand, but you may use the top card of the discard pile, instead. Note that if the discard pile is empty, it stays that way until a player discards. Placement rules are the same as making a pair from your hand.

The winner of the challenge takes all cards used in the challenge and combines them with the asset pile, making a huge (and valuable) set of assets that they place on top of their pile. All wild cards are put on the bottom of the pile.

The player whose turn it is refills their hand first, followed by the challenged player, if needed.

If there’s nothing you can / want to do, you may discard a card and draw a new one. Not much more to say about that.

Play continues until all cards are played. Total your assets, and the player with the most wins the round! 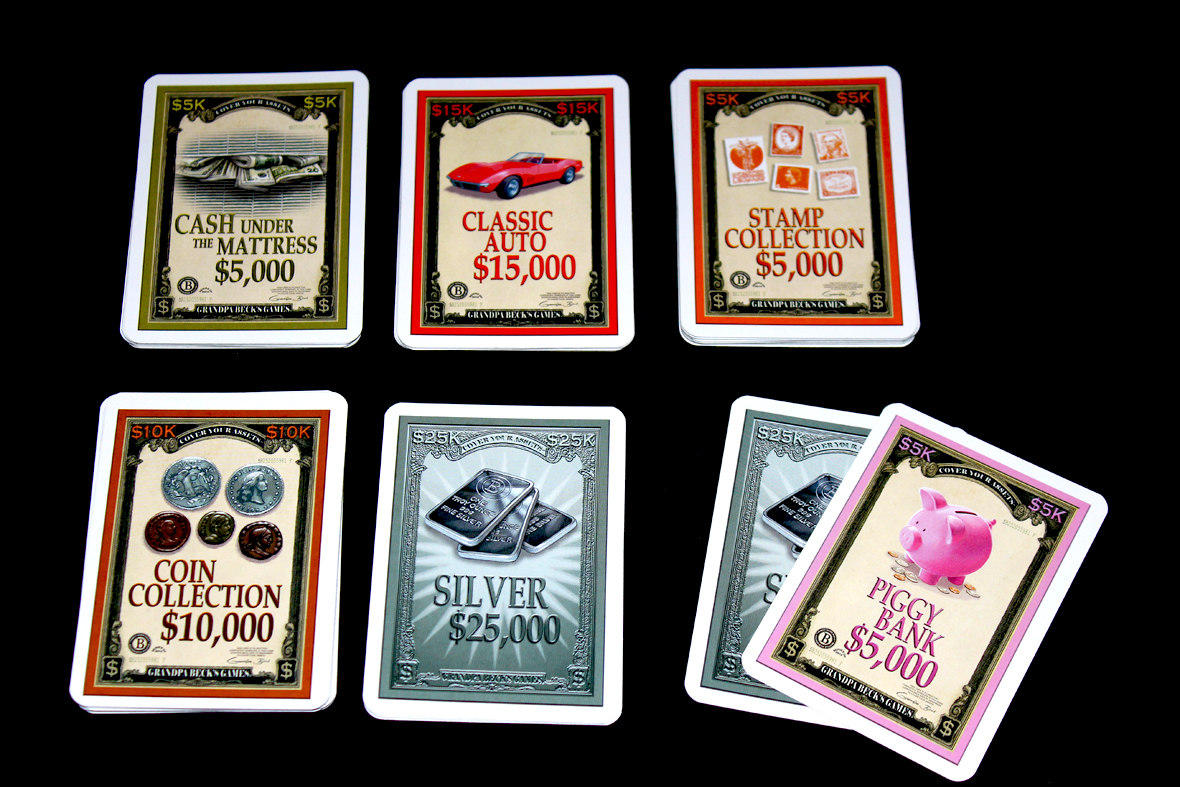 This is the recommended way to play the game (though I usually just play round-by-round). Keep track of scores across rounds, and if one player finishes a round with over $1,000,000 in total assets, they win! If there’s a tie, the player with the most total money wins.

Honestly, I’d recommend it at higher player counts. The decision space is limited enough that downtime doesn’t increase a ton, and also you can get robbed by any player at any time, so there’s still stuff happening even when it isn’t your turn. You’ll also get table talk where people tell you to steal from someone else, which is generally amusing. At lower player counts, there’s just … less happening, I feel. Here, given that there’s a huge spread of cards in people’s hands and there are a lot more asset piles available, you’re going to see a lot of movement and a lot of theft. Just make sure you don’t let any pile grow too aggressively. Like I said, I’d probably stick to the higher end of the player count spectrum for this one. 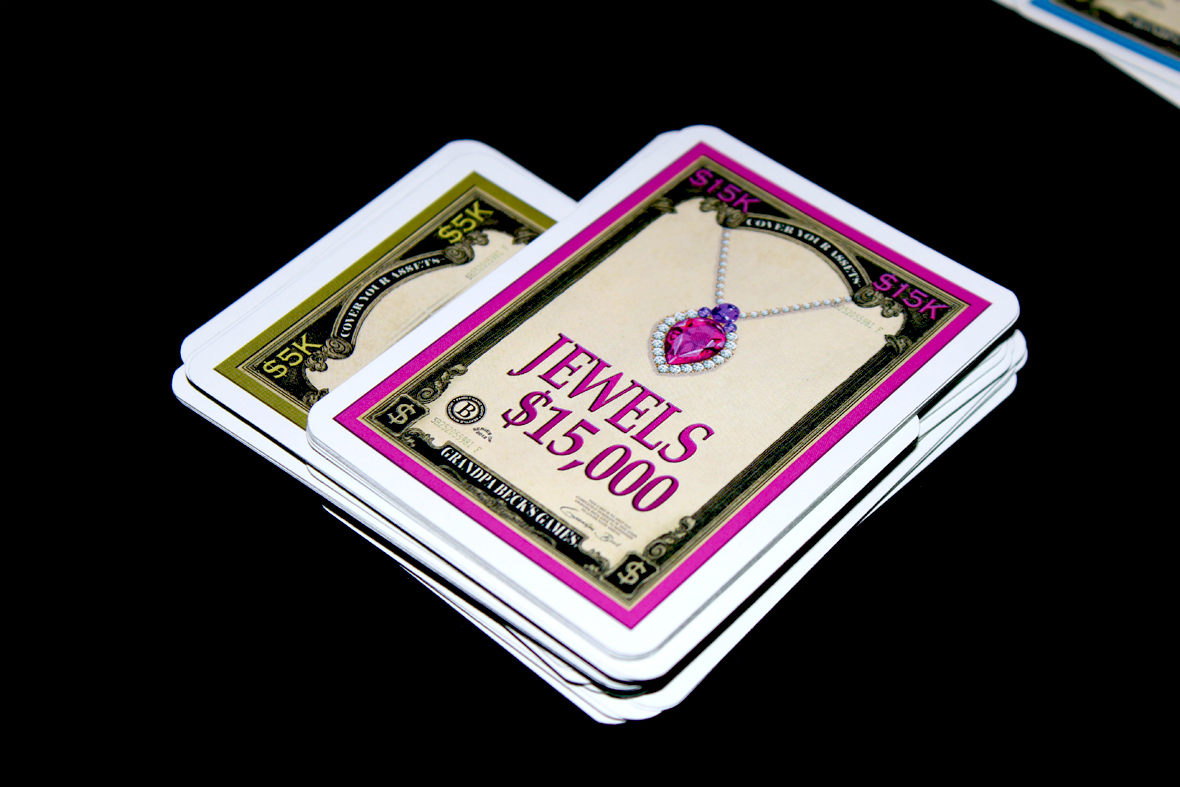 Overall, I was actually pretty pleasantly surprised by Cover Your Assets! I think I underestimated it a bit because of all the take-that, but my first play went so well that I had to rethink it, a bit. Sure, it’s aggressive, but that’s the point of the game, rather than a mechanic hastily added onto an otherwise not aggressive game, you know? It means that the game sets the terms of those interactions and you have a pretty good idea of what to expect. That also tends to work well for games that you’re going to be playing with younger players (this one’s rated for 7+), since there’s not a ton of complexity to the game itself. Sure, the place where this breaks down a bit is that the game relies a bit on luck to make some of the magic happen, but that should cancel out over multiple rounds, in theory (and even if it doesn’t, it’s hard to care too much, unless you never draw a Wild card, which is frustrating). Either way, playing this makes me interested to see if additional complexity will make the game more or less interesting, so I may check out Cover Your Kingdom soon, should the Kickstarter fund. Either way, I’ve had fun with Cover Your Assets, and if you’re looking for a quick family game, you enjoy acquiring stolen wealth, or you’re just here for some take-that in a fun setting, this one might be for you!