Full disclosure: A preview copy of Burgle Bros 2: The Casino Capers was provided by Fowers Games. Some art, gameplay, or other aspects of the game may change between this preview and the fulfillment of the Kickstarter, should it fund, as this is a preview of a currently unreleased game. Also, while I don’t charge for Kickstarter previews, the publisher was charged a rush fee due to the tight timeline they needed the review completed in.

I mean, you can tell from the title I’m probably overwhelmingly excited about this. This is a straight sequel to one of my favorite games when I first entered the hobby, so let’s see how things shake out from here. Fowers has pushed out a lot of cool stuff in the last few years, as well, so I’m expecting to see some interesting upgrades to the gameplay. That said, it’s probably best if we just launch right into it and see what’s changed since the original.

In Burgle Bros. 2: The Casino Capers, you’ve … kind of spent all the money. You did an awesome heist, sure, but now you’re just kinda between heists, you know? Looking for the next big thing. And that’s fine and all, but eventually you have to get a real job. Or, you think, you can do another heist. A better one. One in Vegas. In broad daylight. It’s a risky proposition, but if you can get your old crew back together, you can get anything done, right?

So while this is a sequel to Burgle Bros, a lot’s changed. Casinos aren’t built as tall as an office building; you’ll only need two floors. You can follow one of the three layout cards to start, but don’t look at the other side of those. If you’d prefer to do it yourself, you can do that, as well. First, take the tiles:

Put the Control Room and Escalator in one stack, and put the Safe and the Staff Elevator in the other stack. Shuffle the remaining tiles and make two stacks of 16 tiles. Make two 4×4 patterns, and then add 7 walls to each floor:

They can’t block off areas, but Doors can:

Put 4 of them on each floor, with the “closed” side up (red, in my preview). Now, shuffle the chips and place eight on each floor randomly by shuffling the Patrol Deck and revealing eight cards: 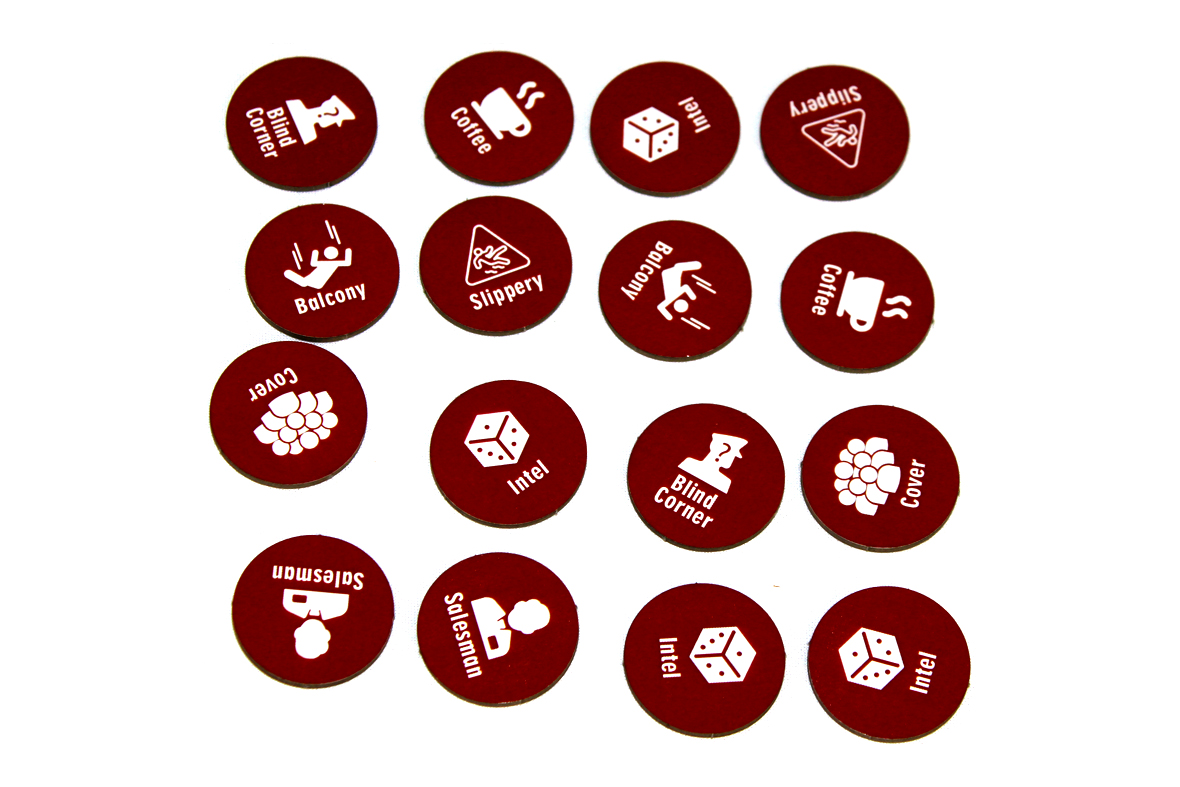 Once you’ve done that, it’s time to start setting things up. I’m using the alien tokens from the game Nine Tiles Panic, but I assume there will be newer Bouncers. Prepare the Patrol Decks by shuffling the Patrol cards for each floor and creating two piles. For lower player counts, you’ll need to remove some cards:

Reveal the top card of each deck and place the Bouncer on that location. Set aside the Event Card decks for now, also:

Yeah, the Peterman retired after the last job. Sad. But this time, you’ve got all-new gear to help you out! Give each player three and have them shuffle them and keep them face-down:

I’ll talk about those more later. Put the dice nearby, too:

Finally, set aside some action cubes, some buffet tokens, and the heat tokens:

Have the first player choose a corner of the building to enter from. Once that happens, reveal another Patrol card; that will be the Bouncer’s destination. Set a die with a 3 face-up, there; all Bouncers have a movement speed of 3. You should be all ready to start! 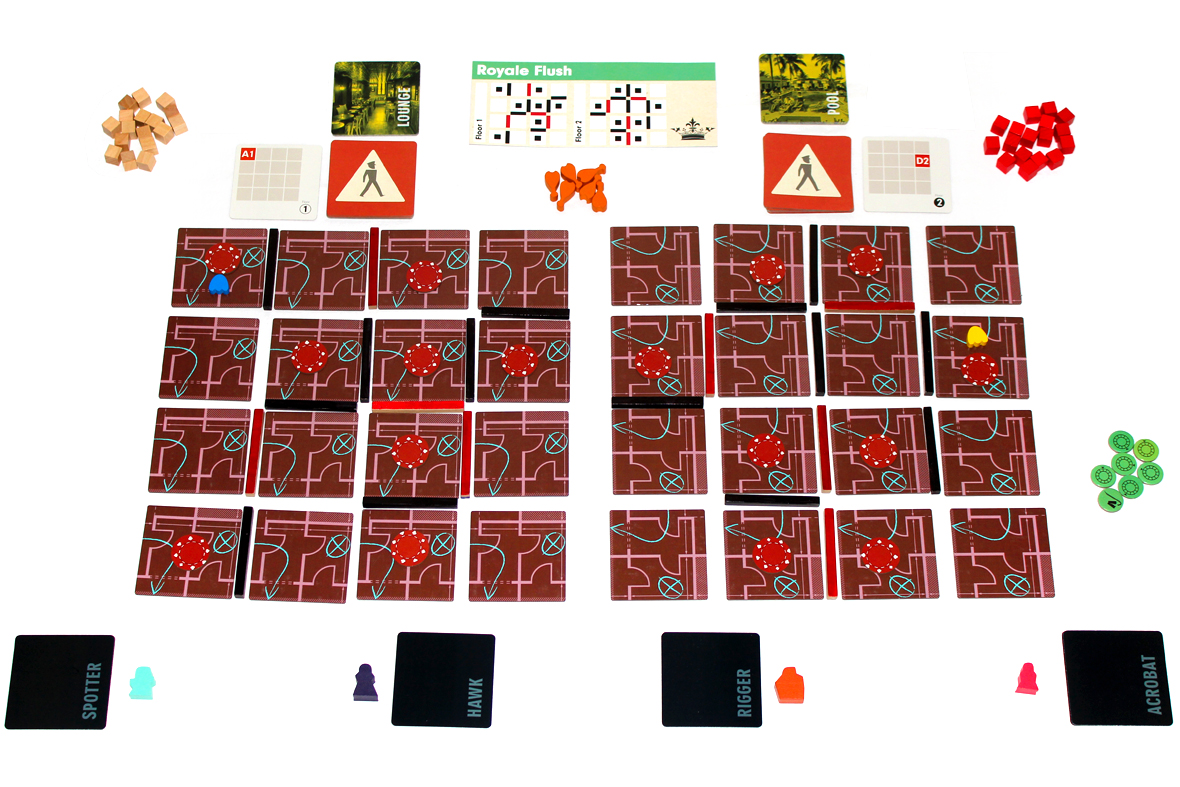 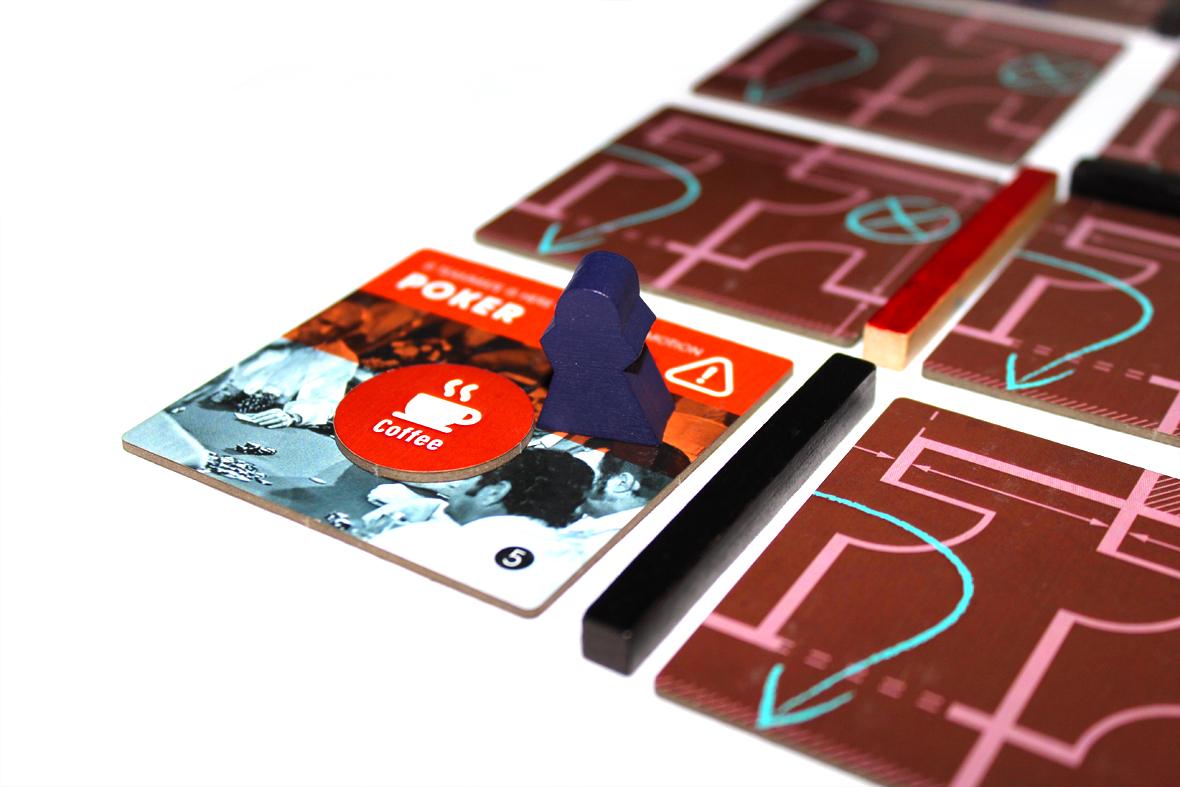 The game plays … like a standalone sequel to Burgle Bros. Some things have changed, others have been streamlined. If you’re just joining us, that was 400+ reviews ago, so it might be due for a recap, anyways.

Your goal is to crack the safe and get out. Nothing fancy. You’ll need to use all your wits and your crew’s specialties if you want to dodge the bouncers, the crowds, and the commotion at the tables to make your big break, though. It certainly won’t be easy, especially once you find out what’s in the safe.

On your turn, you have four actions that you can spend. You may perform any action, usually multiple times unless otherwise stated:

To unlock the safe, you must reveal all the tiles in the Safe’s row and column. The six numbers revealed comprise the passcode to the safe. You’ll need to roll those numbers on the dice if you want to crack it open. Note that if multiple of the same numbers appear, they only need to be rolled once unless those tiles were revealed after the initial number was rolled. 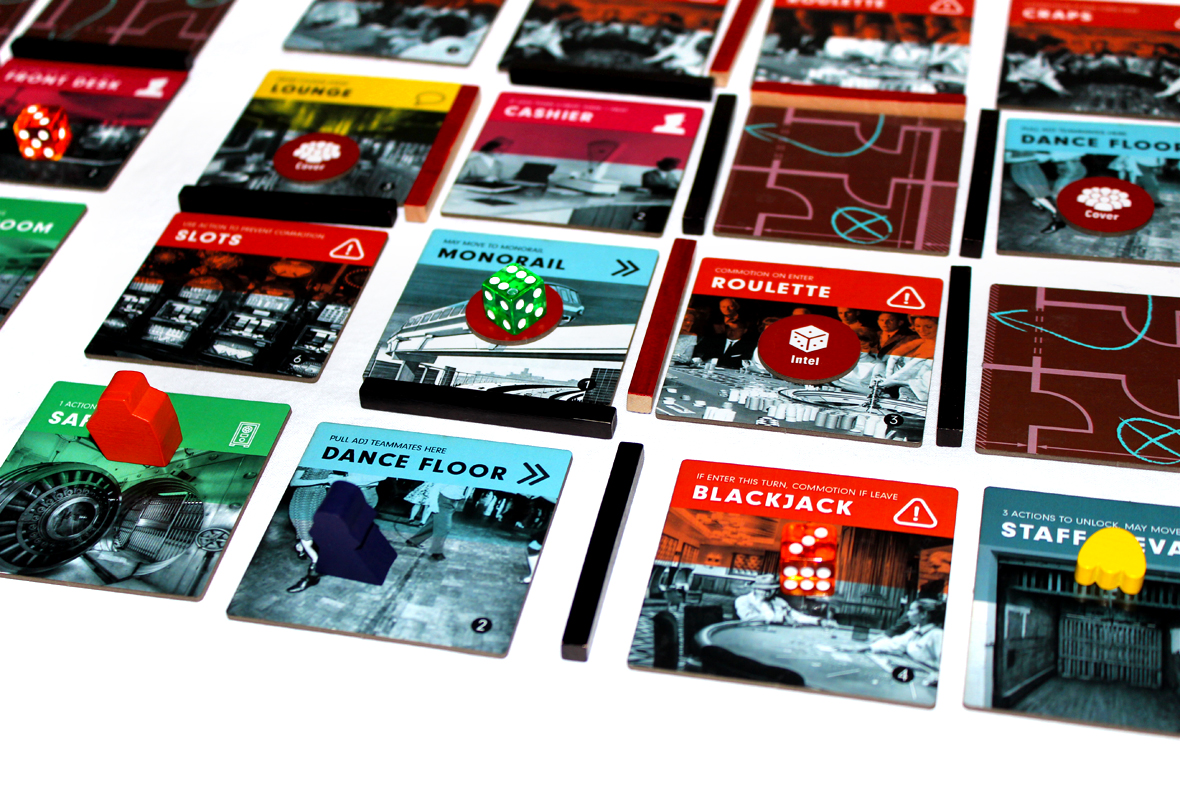 If you’re not careful, you might cause a Commotion! If you do, the Bouncer’s destination is moved to the tile where the Commotion happened and they immediately take one step towards that destination.

One additional free action you may take is closing any currently open door adjacent to your tile. May come in handy, and it’s good etiquette. Once you’re done, just end your turn by revealing one of the Gear Cards that you haven’t revealed or used. Those can usually be used on any player’s turn, so pay attention when you’re not up!

Now that you’ve taken your turn, the Bouncer on your floor moves. Generally, they move toward their destination. If there are two or more paths, they will take the shortest one; if both are the same length, then they will take the one that leads them clockwise. It’s what they learned in Bouncer School. If they land on your space or pass through it, you gain 2 Heat. Rough!

Once the Patrol Deck runs out, Bouncers switch to Hunt Mode. In this mode, they always take three steps toward the closest player at the end of their turn. Be careful!

Play continues as normal until you open the Safe. When you do, flip over your layout (or draw a Finale Card, if that’s how it gets implemented in the final version); you’ll have a new task! Generally there’s a bit of story and then an Easy or Hard Mode requirement. See what you can get done! You win if you complete the story and escape. You lose if any one player gains 6 Heat!

I think the only real one is just discarding a card per player below four during setup. The reason there’s such a small penalty is that you’re missing out on additional gear cards and you have a lower Total Heat threshold, so you’re really mildly penalizing yourself if you try to run a two-person crew. That said, as with many games, it’s going to likely go a bit faster at two players, or it will at least seem that way since there’s less downtime between your turns. The nice thing is, though, with the new Gear there are still plenty of things you can do even when it’s not your turn, so even additional downtime isn’t much of a problem. I generally play all of these games with four players, but I have enjoyed it with fewer as well.

So this is a funny number, because, I think I actually like Burgle Bros. 2 better than the original? If you ask me, almost everything in Burgle 1 has been iterated on and improved for Burgle 2, and this game enjoys the benefit of that iteration. That said, if you go read my original Burgle Bros. review, you’ll notice that it has a much higher rating than this one! What gives? Well, for one, it’s been almost a year since I’ve last played it, and I think that that score was reflective of where I was at in gaming when I tried it. I think it’s a wonderful introductory cooperative game, but I think my tastes have evolved a bit (and I got much busier with reviews), so it’s been a hot minute since I’ve actually gotten to play it. Burgle 2, however, I can compare to the other games I’ve played and this is about the right place for it. I think it’s pretty great, especially for a not-quite-finished version of the game, and I’m really excited to see where it ends up. The question most people will ask (correctly) is whether or not there’s space for both in a collection. I think so, personally; the first one’s a bit more introductory, with the strategic part being the three-floor variant. I think this one starts out about as difficult as the three-floor variant, so for someone like me who only plays the two-floor version, it’s a perfect mix. More finales will definitely help keep this fresh (especially if they continue to support the game after it’s published), but I have had a lot of fun with the game in its current state. If you’re looking for a solid successor to the classic Burgle Bros., I’d recommend checking out The Casino Capers! Hopefully you’ll enjoy it as much as I have.