Full disclosure: A review copy of Hats was provided by Thundergryph Games.

I suppose that now that I’m out of doujin games to review, it’s just going to be a lot of Gen Con games for a while. That and a big box of games from outside the US that Nice Game Shop sent me. We’ve got one of those this week via Abracada… What?, one of the most challengingly-named games I’ve played in some time (especially because the version I have is the Korean version, which is Abraca… What?, for some reason), but we’re not talking about that. We’re talking about the newest title from Thundergryph Games, Hats! Another Gen Con premier. It’s part of their new Wonderland-themed line, and that’s delightful. Also, the reviewer package they sent it in was super cute — it came with a box of tea and a letter from them that was wax-sealed! I’m not sure if that needed to go in the disclosures or not, so, here I am mentioning it now. Wax seals are really cool, everyone; that’s the whole review.

Anyways, in Hats, you’ve been invited to the Mad Hatter’s garden to play a game of hats. And everyone knows in a game of hats, you win or you die. You’re at least 40% sure that’s how a game of hats works, and it’s a solid 40. To prevent a terrible outcome, you’ll be swapping hats, trading hats, wearing hats, eating a cookie maybe, and, of course, holding on to your absolute favorite hat. Will you be able to take enough hats to win the day? Or will your chances of success end up being capped?

Setup isn’t too bad. Set the board in the middle of the play area: 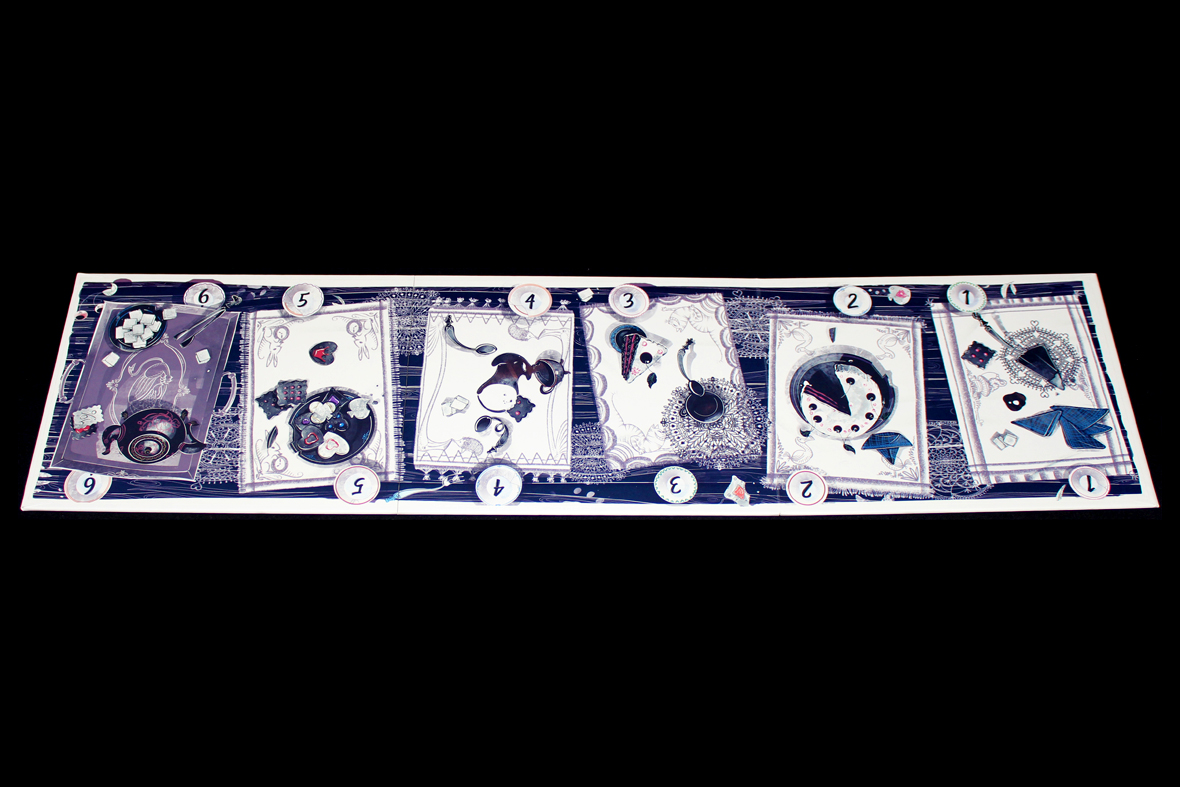 Set the napkin nearby (it has a scoresheet on the other side):

I usually put the cookie on top, for starters:

For a two-player game, you’ll remove hats of two different colors. Beyond that, shuffle up the Hat Cards:

Deal each player 9 hats, and fill the board with hats (you only use the final space in a 3- or 4-player game). Once you’ve done that, you’re ready to start! 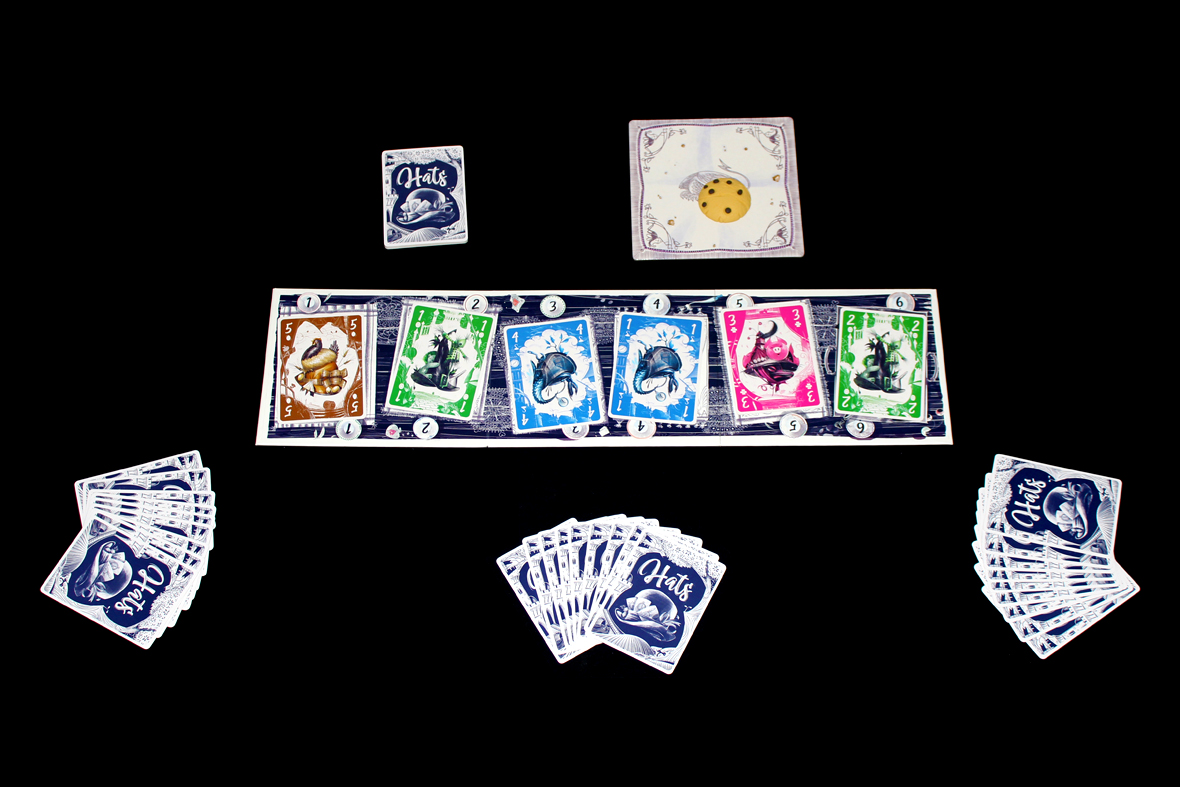 The game of Hats is one of trying to accumulate valuable hats while protecting your favorite, since that will ultimately be worth even more to you. However, as you’d expect from a Wonderland game, everything is constantly shifting and changing, so this is a more difficult task than it sounds.

A game of Hats is played over 8 rounds; after all players have played their eighth card, you’ll calculate scores and the player with the most points wins! Let’s talk about how the rounds go.

On your turn, you must either Exchange Hats or Create a Black Hat.

You may take one of the Hats from your hand and exchange it for any face-up Hat on the board, following one of these two rules:

Instead of exchanging a Hat, you may play your Hat face-down in front of you to your Tableau as a Black Hat. Black Hats are always worth 1 point at the end of the game. Black Hats also count as a type with respect to earning the Cookie.

After doing one of those two actions, you may discard a card from your hand face-down and draw a new replacement card from the deck. If the deck runs out of cards, shuffle the discard pile and use that as a new deck. 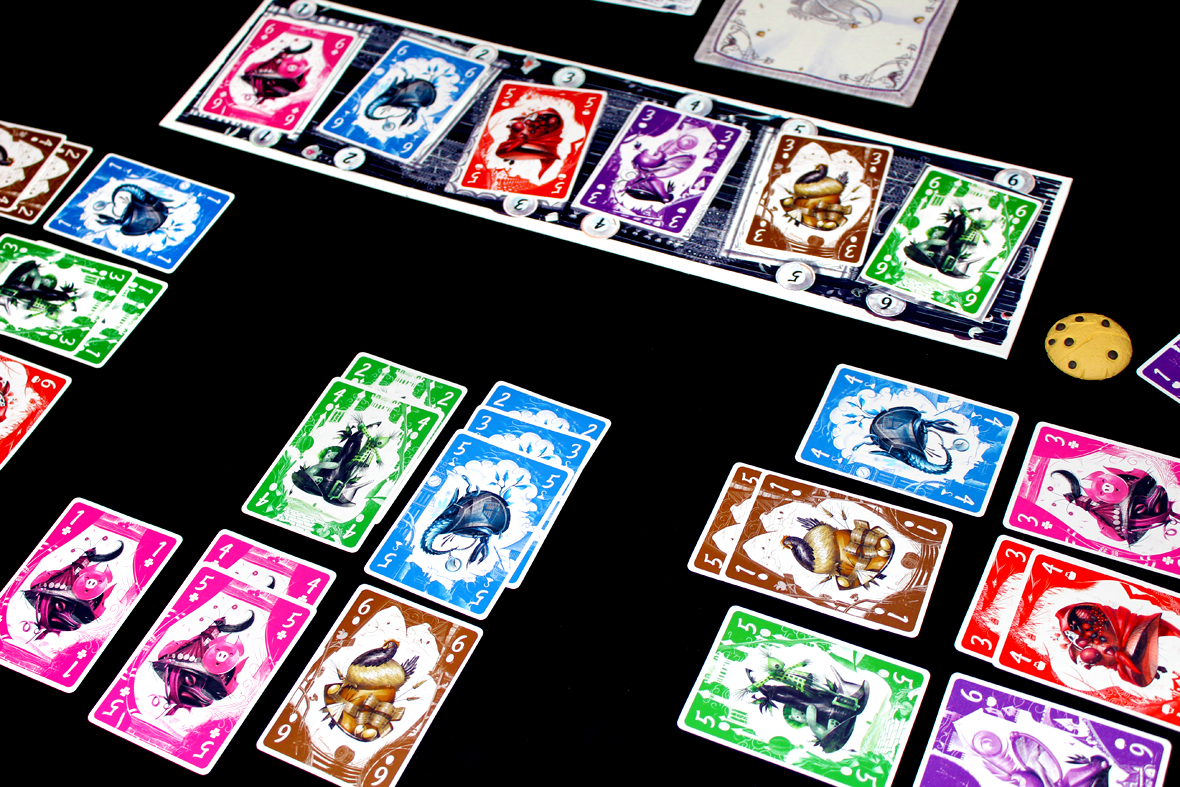 The game ends when players have all played their eighth card. The ninth card remains in your hand as your favorite hat. Your favorite hat earns a special bonus (maybe) at the end of the game. Now to score. First, if any cards on the board are the same color, flip every card but the card in the lowest-valued slot face-down; those won’t count. Then tally up points:

At four, you play the same as you would at three, but you’re on two teams of two. Sit across from your partner. Instead of discarding and drawing as an action, you may swap a card with your opponent, face-down, as an action. The only thing is, you cannot discuss the type, color, or number of the cards you’re swapping.

I’m generally pretty opposed to team-based variants for games, or, at least, I don’t like to learn the game that way. For me, it’s difficult to grasp what the strategy of the game is for your first game, and that’s compounded by having another player to deal with. I kind of wish that were more clearly indicated in the player count, since I usually ignore those kinds of variants. That said, I struggle a bit with this one at two, also, since it kind of feels like the game is moving a bit too quickly to have much strategy. The sweet spot for me is three players, since you can form light alliances with other players who have similar tableaus to try and maximize your overall score. It feels dynamic at about the right level for me, and I’m a fan of that. So, yeah, I’d probably mostly keep this one to three players, personally. 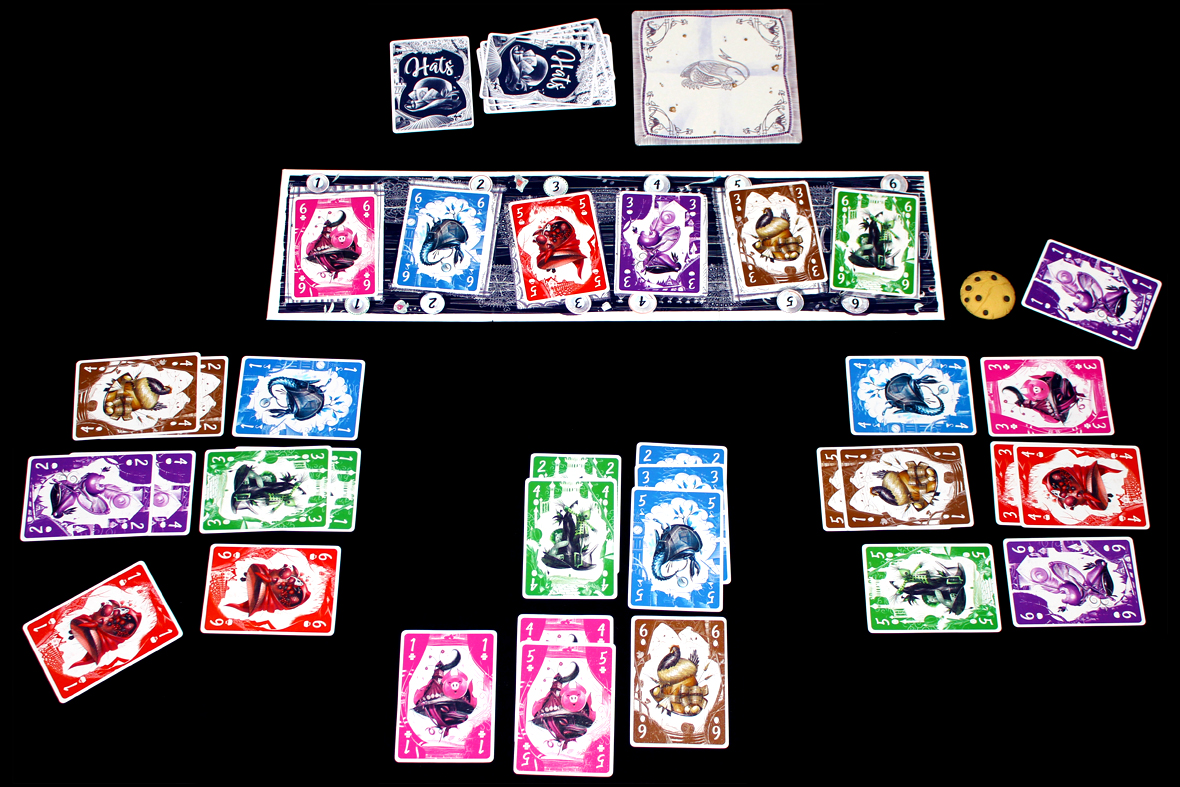 Overall, I thought Hats was enjoyable. I think, for me, the major players in me leaning favorably on it were the art and the components; Thundergryph has proven itself to be truly a frontrunner in the industry in terms of the pieces and the art they put into their games. It’s very visually striking, and the purple box is a particularly impressive piece. If you have friends that are into games as art or conversation pieces, I’d highly recommend this and several others. On the gameplay side, it’s a fairly straightforward card game; I wouldn’t go out of my way to say it does anything particularly novel, but I also think it’s shooting for the light card game space and ends up there. It feels pretty thematically accurate, in the sense that you’re playing a wild game of hat swapping and that seems on-brand for Wonderland, so I can appreciate that. The thing is, whether or not you’re successful more often than not relies on the right hat at the right time. But, on the other hand, the game is often quick enough that it doesn’t matter a ton, in that sense. If you’re looking for an Alice in Wonderland-themed game night, I’d highly recommend this one; it really captures the feeling of what you’d expect from such an event. If not, I’d recommend it for people who really appreciate beautiful games or short and quick, high chaos games. If that sounds like the kind of gamer that you are, then you should check out Hats!