Full disclosure: Review copies of Terror Below and the Hidden Cache Expansion was provided by Renegade Game Studios.

Alright, powering through a long one this week with Terror Below and the Hidden Cache Expansion! I’ve been playing these on and off for last couple weeks, and 35 photos later, I’m pretty excited to talk about them! These two pieces combined make up the Terror Below Kickstarter, essentially, and I’m a pretty big fan of Renegade, so let’s see what’s going on with this particular game.

In Terror Below, the Worms have gotten loose! W.O.R.M.s is probably more accurate, as they’re Weapons Of Remote Massacre. And this almost-certainly-a-backronym doesn’t do these things justice; they’re gigantic! Thankfully, American ingenuity prevails and you figure out a way to make money; sell their eggs back to the government and kill some Worms along the way! With guns, obviously; again, America. Hop in your car or on your bike and get your crew together; it’s Worm-hunting time. Will you be able to defeat enough Worms to make a living for yourself? Or will a living end up being the death of you?

Setup can be a bit nontrivial, especially if you’re using components from the expansion. First thing to do is decide which side of the board you’re using:

If you’re using the Canyon side, the rules change a bit. Not a huge deal. You can also set up the Worm Standees, if you want:

They’re mostly for cosmetic value, but I like them. Have each player pick a car:

And take a player aid card to boot:

Each player aid belongs to the player with the matching car. Shuffle the Bounty Cards:

Place four in a row on the top part of the board. Shuffle the Weapon Cards:

Give each player one. Do the same with the Items:

Shuffle the Vehicle Cards; give each player 3: 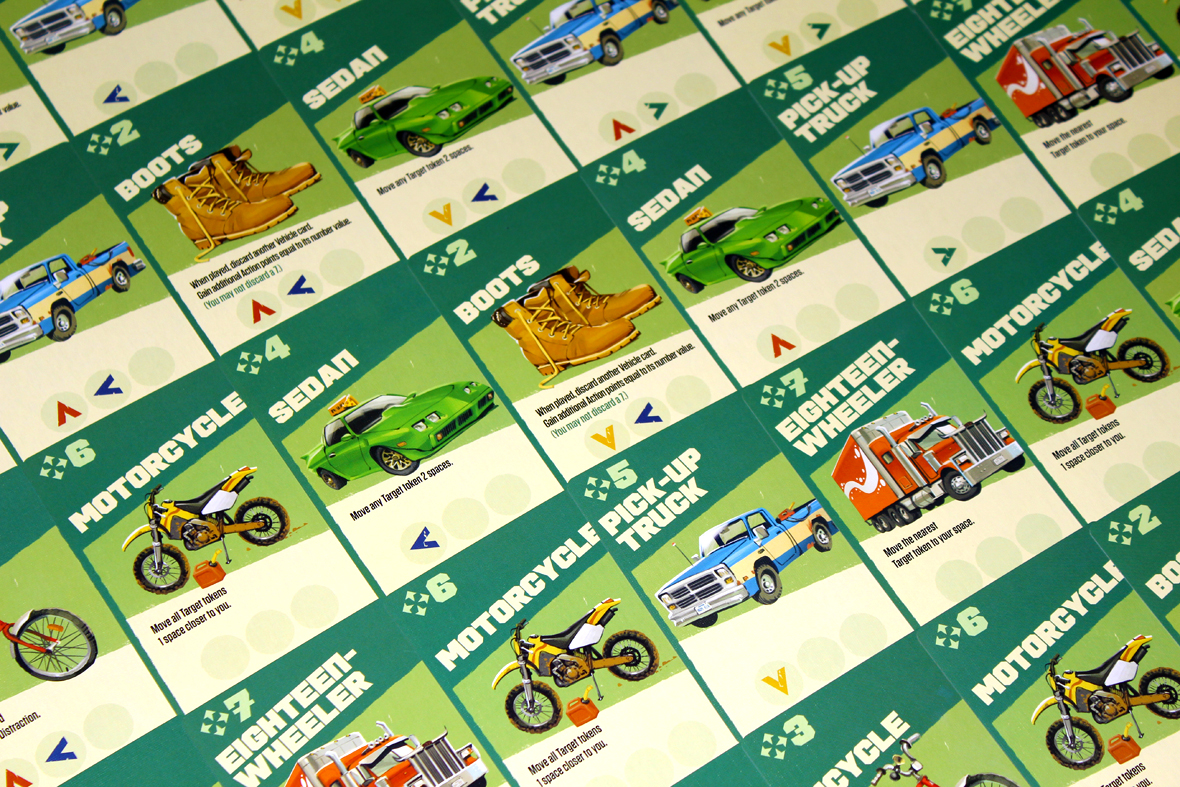 Give each player 3, and they should organize them however they want, flipping the top one face-up to be their Leader to start the game. Now, add the Locations to the board:

They should go on the skull-marked spaces, but you can decide which one goes where, if you want. For your first game, go left-to-right, top to bottom: Government Facility, Motel, General Store, Hospital, Police Station. You can set the VP tokens aside, for now:

Set up the Worms by first using the four Starting Worm Cards: 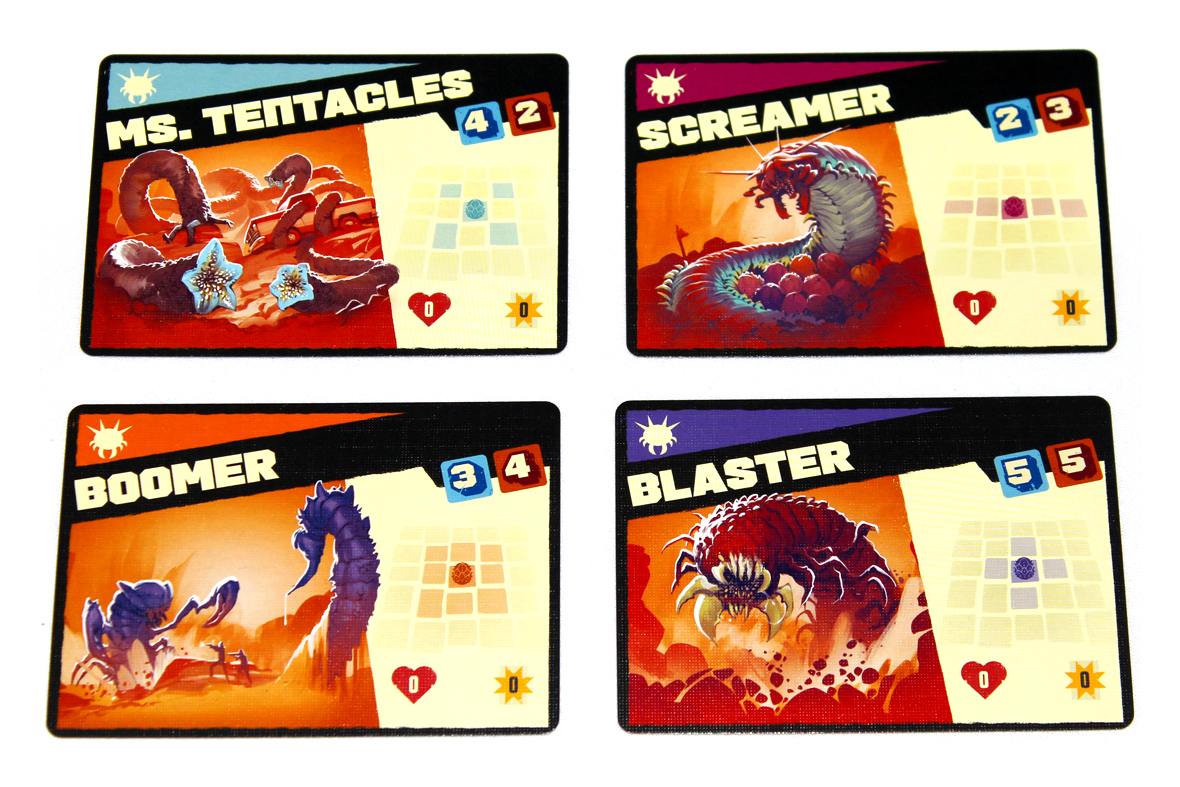 Treat these as “attacking”. This requires Eggs: 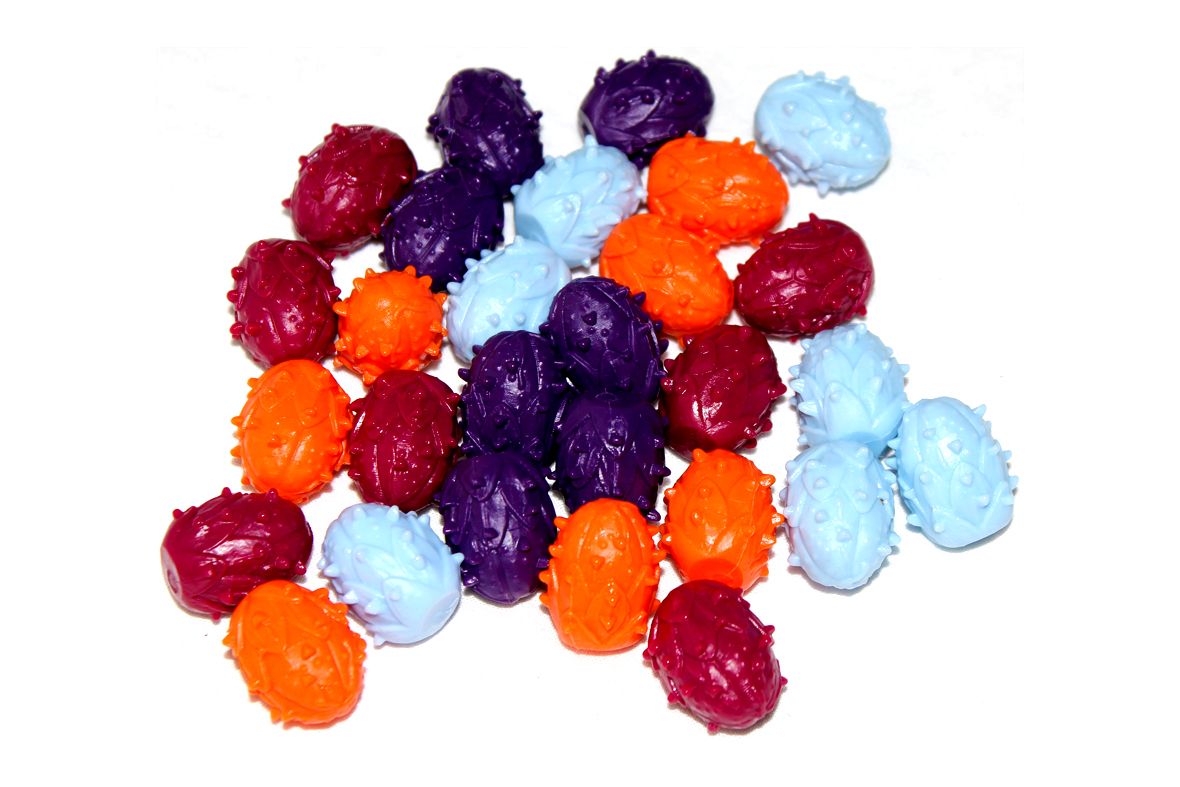 And it requires Target Tokens:

Typically, when a worm attacks, you place an Egg on its Target Token. Since there are none during setup, just add the eggs to the spaces indicated on the cards. There are shaded spaces on the cards, as well, and that’s where you’ll add Rubble: 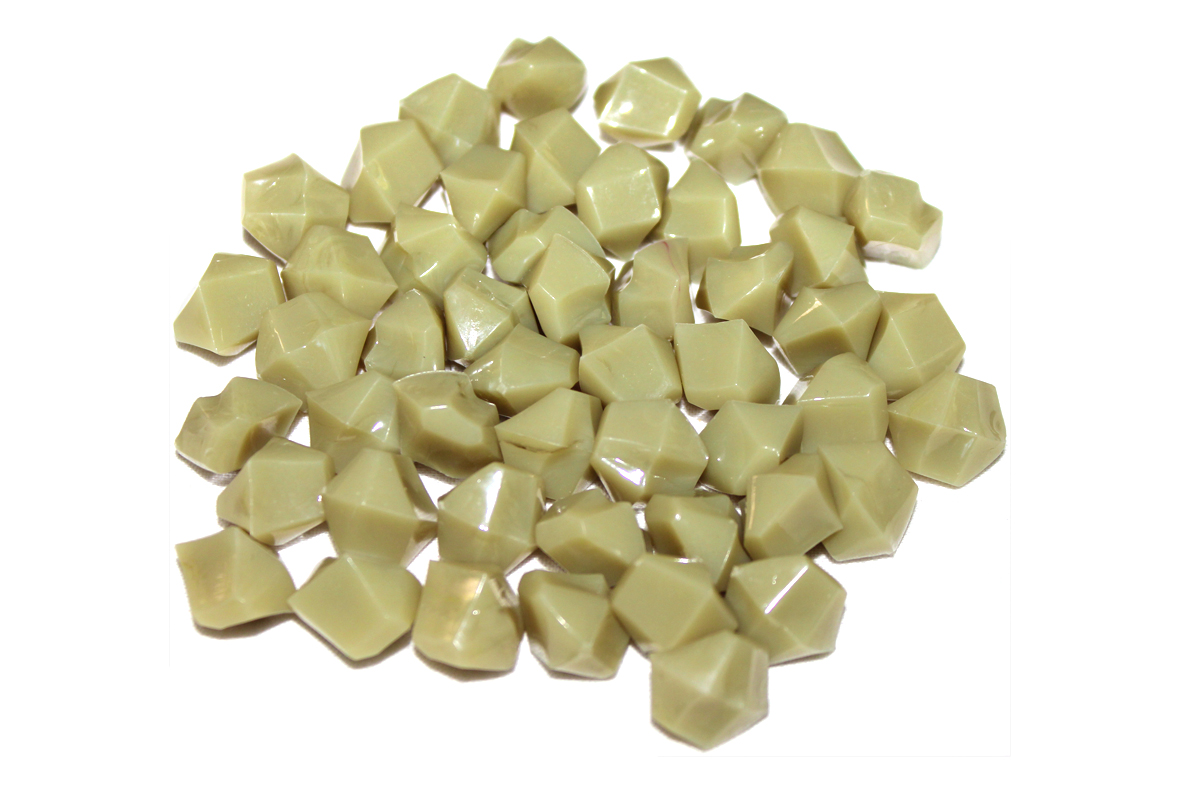 Once you’ve got the game down, you can ignore the initial Worms and just draw 4 Worms from the Worm deck to start; up to you. Either way, you then resolve additional attacks by revealing the top card of the Worm deck:

Flip three extra Worms face-up onto the empty spots in the Terror Zone and place the Target Tokens on the spaces that correspond to their starting values. Now, in reverse turn order, players place their cars on one of the locations, and you’re ready to start!

A new Worm type and a new Character:

Some items and a weapon:

And, new Radioactive Eggs! You can replace the blue eggs with them and they glow in the dark: 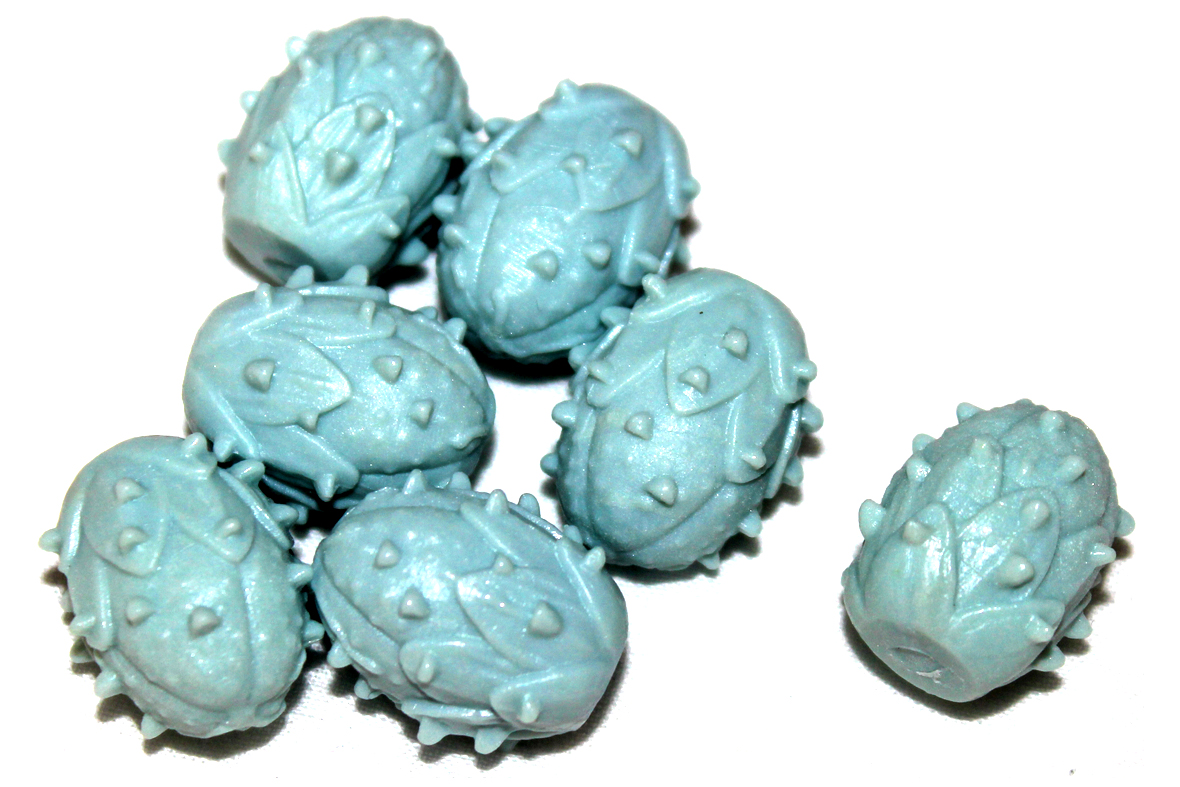 One thing I really appreciate is that they upgraded the Target Tokens:

The last thing they added is a TPK Mini; more on that later: 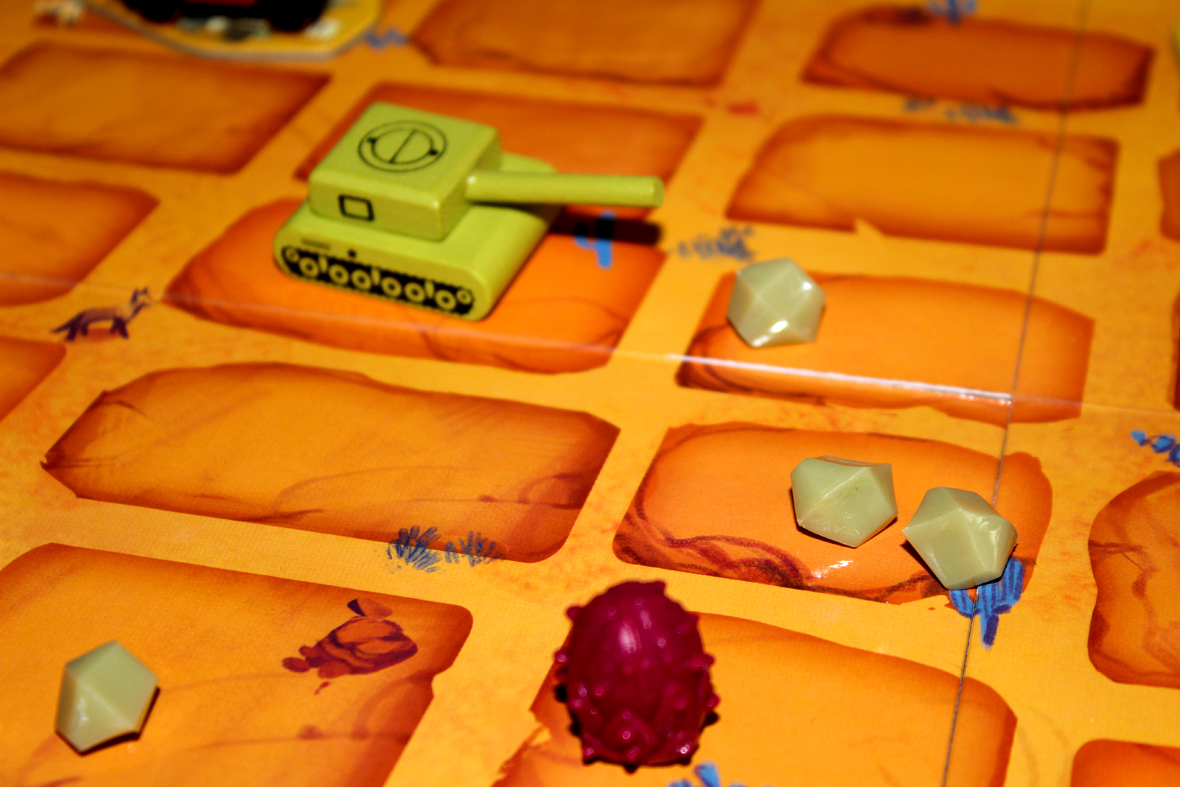 A game of Terror Below takes place over a sequence of rounds, in which each player takes a turn. On your turn you make plans to move, resolve actions, and then deal with the potential terror of a Worm attack. Let’s go through each step.

First, play a Vehicle Card on one of the three card areas in the Terror Zone. You may play on any Worm, provided it hasn’t reached its card limit (the number in the bottom-right corner). 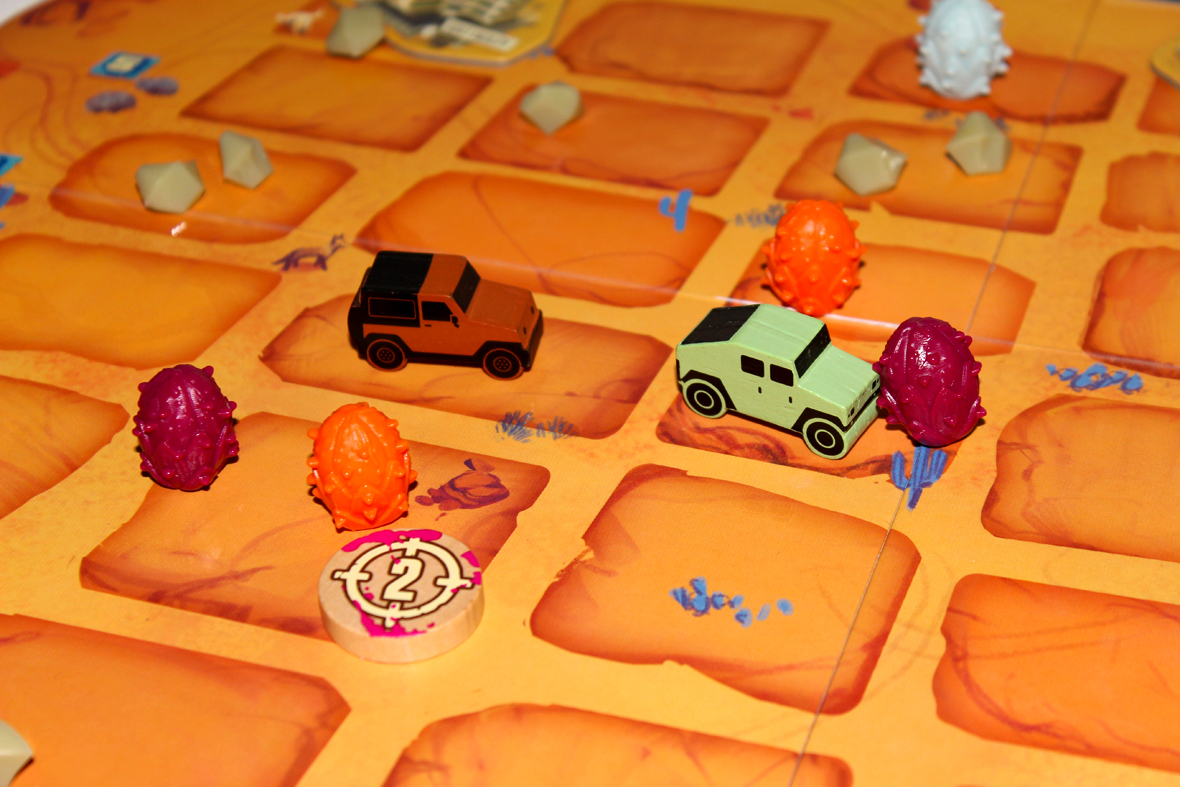 Now, look at the Vehicle Card you just played. The number in the top-left corner is how many actions you get to take on your turn. You may take the same action multiple times, but your turn ends when you run out of Action Points or you take the Pick Up All Eggs action. 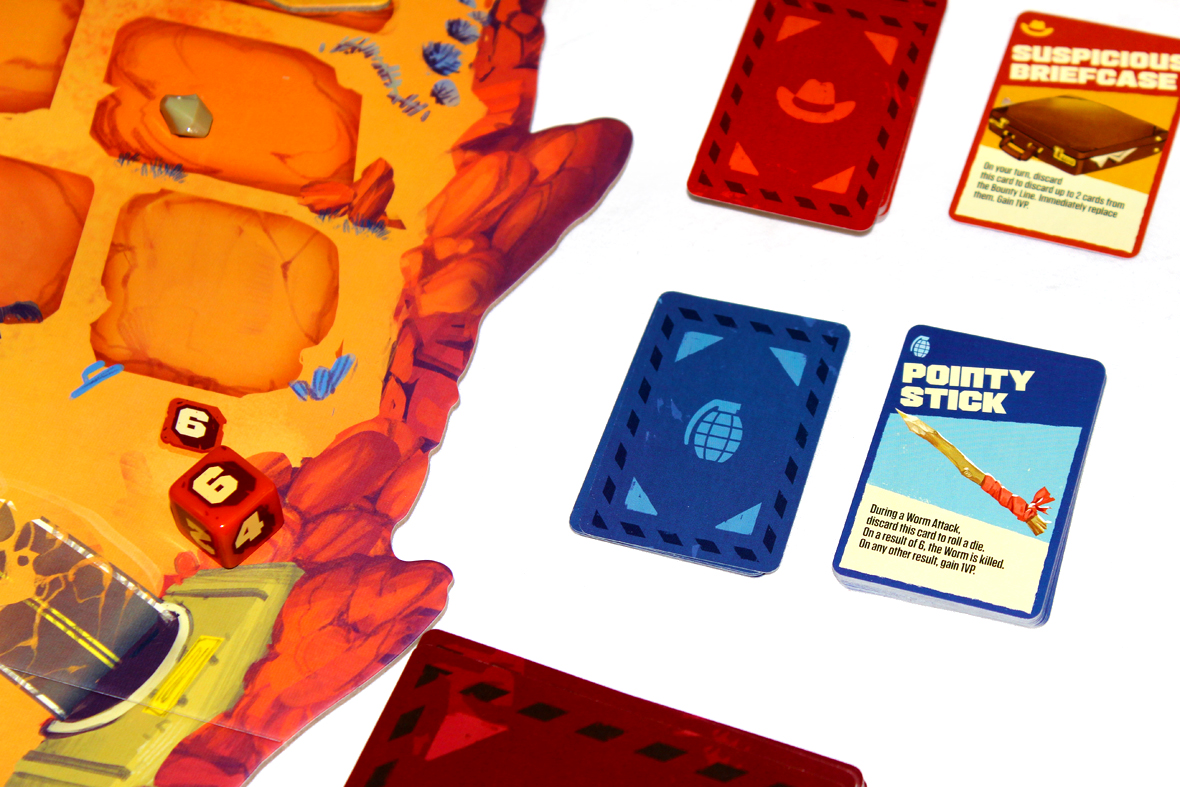 So, you still need to resolve your Vehicle Card’s special ability; do so now. If any Worm has its limit of cards below it, it attacks!

To end your turn, draw back up to 3 Vehicle Cards.

In a two-player game, after your turn has ended, roll a die to choose a Worm (1/2, 3/4, 5/6) and draw one more Vehicle Card from the deck and add it to that Worm’s space. Resolve it (and a subsequent attack) as normal. Do not resolve the card’s ability.

The game ends as soon as a player hits 20 points! That player wins!

For some variation, you can play with the Canyon! Basically, it’s a gap in the board where nothing can go or be played, but you can try to jump over it. To jump one space, discard a Vehicle Card and pick up any Rubble on the space you enter. To jump more than one space, you must discard a 6 or 7 and then roll the die. If you roll a 4 or higher, you make it! If you roll below a 4, your Leader immediately dies, and you drop everything on the space you would have landed on. So that’s fun.

Honestly, the only real thing is that at higher player counts you should use the Canyon side, I think; it’s a bit more spacious (since, Canyon) and that spread helps a bit (even if there are the same number of spaces). I tend towards liking this most at lower player counts, though, since you still need 20 points no matter how many people are playing, so it kind of increases your downtime as the player counts increase. That said, more is happening when you have more players, since more Worms can attack at any given time, so, that’s also a lot of fun if you’re looking for a high chaos game. Can’t recommend it (since I’m generally anti-chaos), but you can go for it. As for me, I’ll probably still stick with two- or three-player games of Terror Below; I’ve been liking that just fine.

Overall, I quite enjoy Terror Below! It’s got a really fun thing going for it, honestly; it’s bright, colorful, and whimsical enough that I’m consistently amused even if I’m not doing so well. Sure, someone shot off my hat, but I hit them with a repurposed military satellite, so we’re probably even? And that’s not even taking the Worms into consideration. It’s also nice how much variety there is; you can mix up the Locations, you can try new Character combinations, you can even play on an entirely new board with just the base game. Like I said, I don’t think the expansion adds a ton of new stuff, but that’s honestly just a naming collision, in my mind. If they had called it the Hidden Cache (without expansion) or just the Hidden Cache Bonus Pack or something, I would be like “yeah it’s just extra Kickstarter stuff” and that would be that. Recalibrating my expectations to that has helped me be a bit more bullish on it, even if the TPK mini is really really really creepy. It just has so many legs, y’all. Anyways, yeah, I’m a big fan of every part of the game except the potential part of the game where the dog friend dies, which I think should be banned. The dog should just get to escape and live out its days somewhere where people aren’t sending it out into the desert to get eggs. It’s such a good dog. Anyways, my particular gripe aside, I genuinely think Terror Below is a lot of fun, and if you’re looking for a surprisingly-whimsical-given-the-theme spin on pick-up-and-deliver, I’d recommend checking it out!