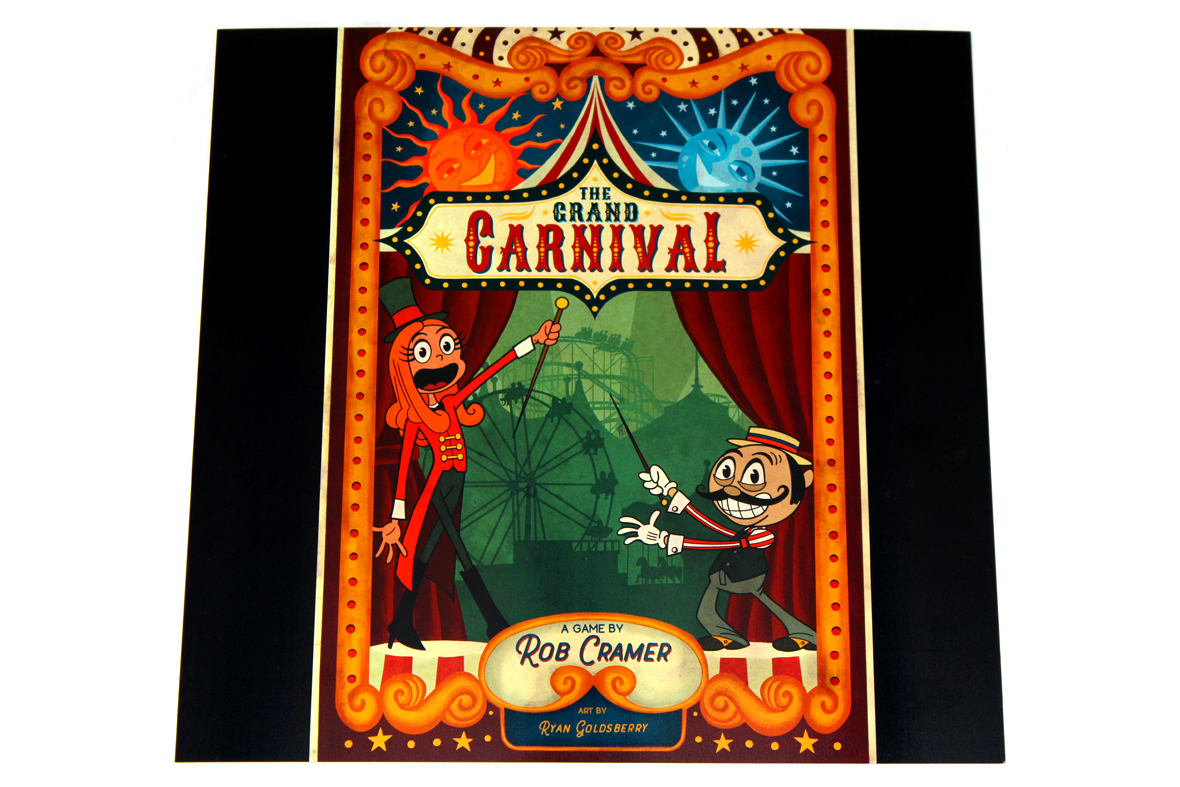 Full disclosure: A preview copy of The Grand Carnival was provided by Uproarious Games. Some art, gameplay, or other aspects of the game may change between this preview and the fulfillment of the Kickstarter, should it fund, as this is a preview of a currently unreleased game. Also, while I don’t charge for Kickstarter previews, the publisher was charged a rush fee due to the tight timeline they needed the review completed in.

Another day on the Kickstarter train! I think this is already an awesome week for reviews, given that I’ve got Camp Pinetop, Time Chase, and TEAM3 PINK on the review docket, so might as well keep the party going with an entirely different theme: carnival construction! Let’s dig right into The Grand Carnival and see what’s happening.

In The Grand Carnival, it’s the summer of 1937, which, you know, long time ago, but there’s a huge carnival coming to town! Several, in fact. You run one of these carnivals and you’re trying to make sure that people remember yours is the best. So get your supplies via train and outbuild your opponents to truly set up a spectacular summer. Will your carnival go down in history? Or will it simply be remembered as a massive flop?

So, to begin setup, put the Railyard Board between all the players, in the center of the table:

Shuffle the Foundation Tiles; place the stack face-down on the Railyard’s 1 Space. Flip four of the tiles face-up on spaces 2 – 5, making sure all the mallets are pointing the same direction: 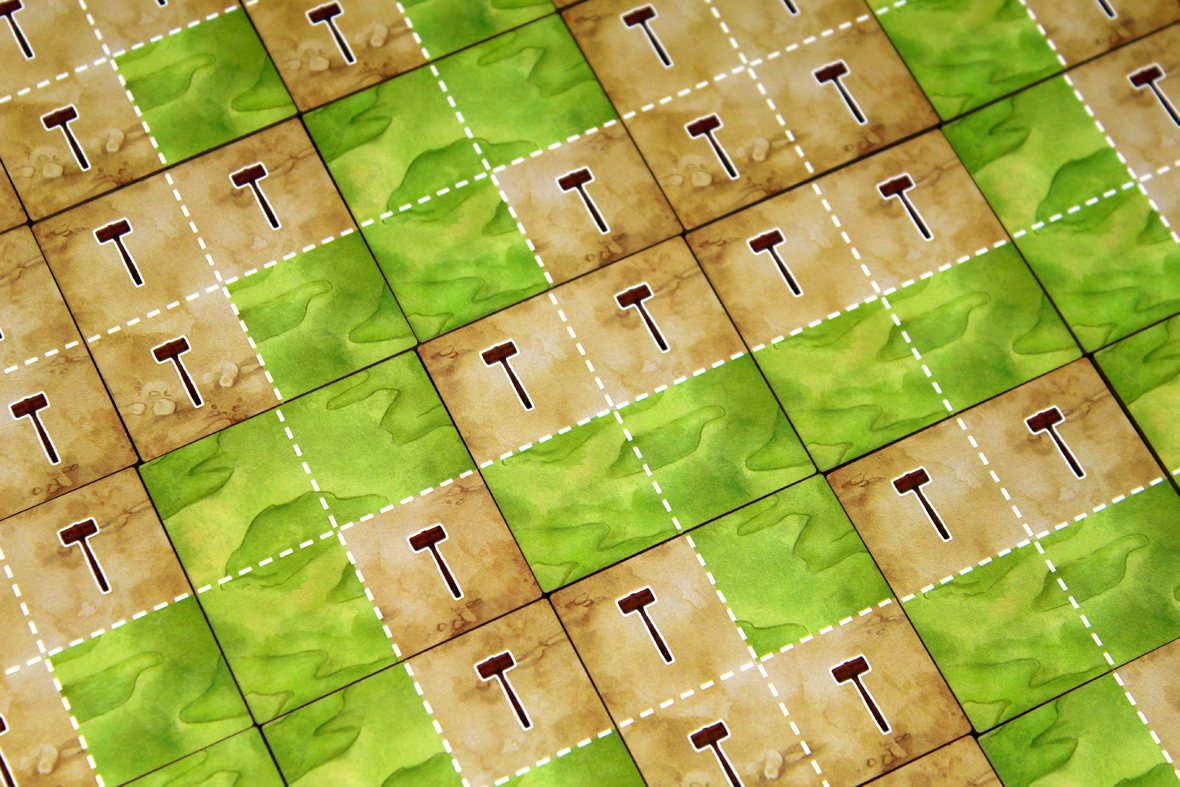 Also give each player eight action tokens of a color. Place five action tokens above the numbers 1 – 5 on your board, and set the other three off the board in a group:

Shuffle the Tricks of the Trade Cards, revealing three face-up near the Railyard Board: 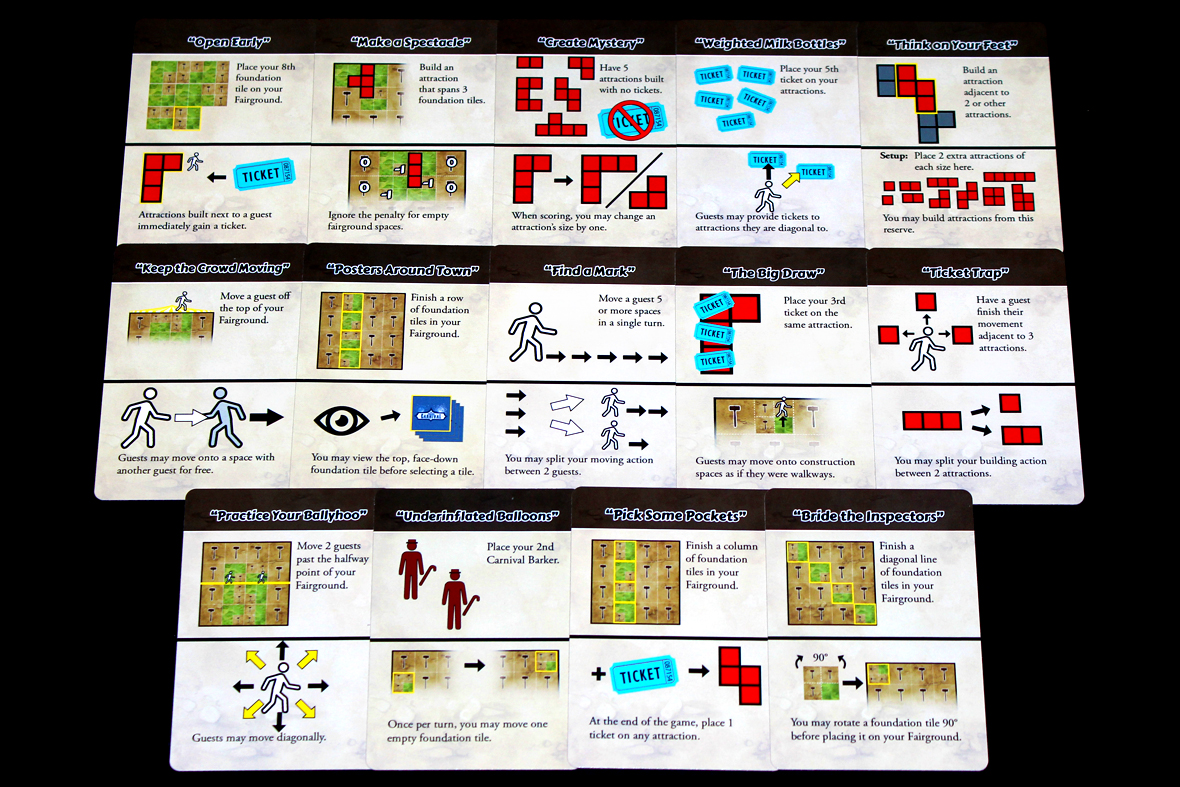 Now, take random Attraction Tiles of each size and put them below the Railyard Board with the other tiles of their size. The number of each is dependent on your player count:

There are more than this. The others are missing final art.

Set aside the Guest Pawns, and give each player 2 to place on the two Entry Spaces on their Player Boards: 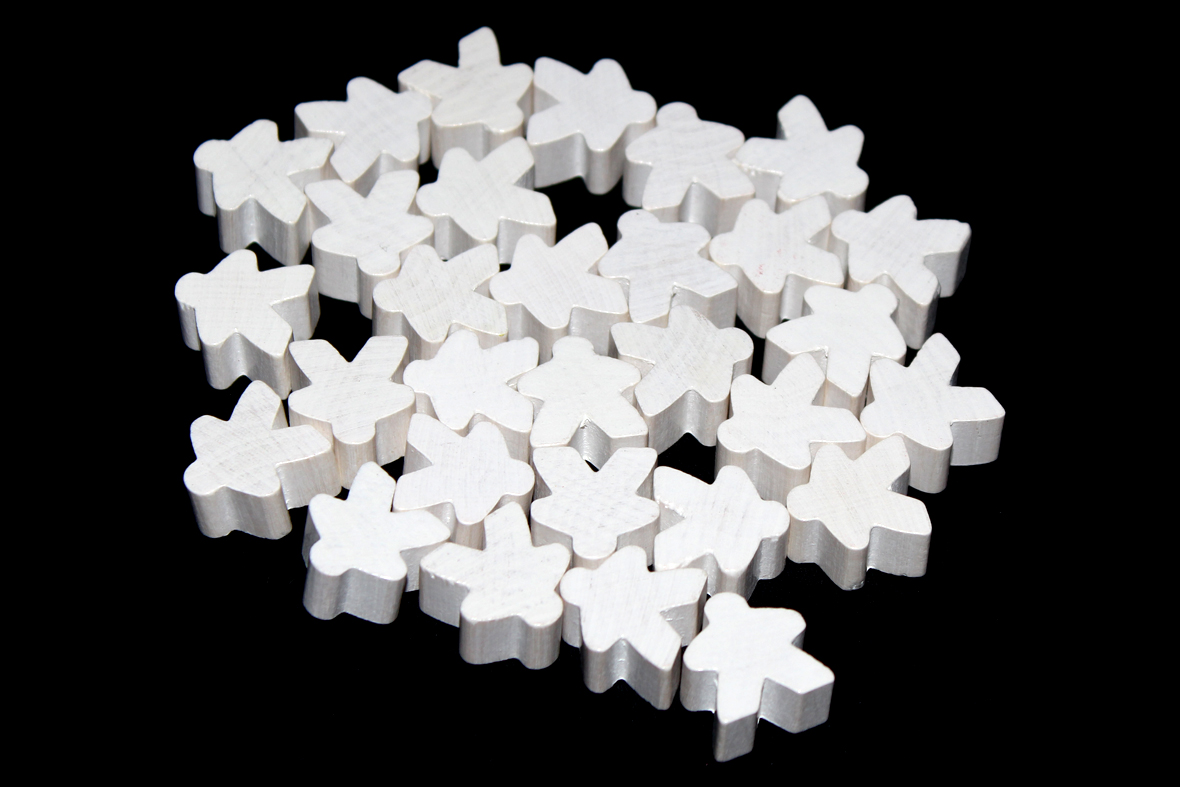 Create a supply of Carnival Barker pawns, as well:

Place the Tickets in a supply near the Railyard Board, also: 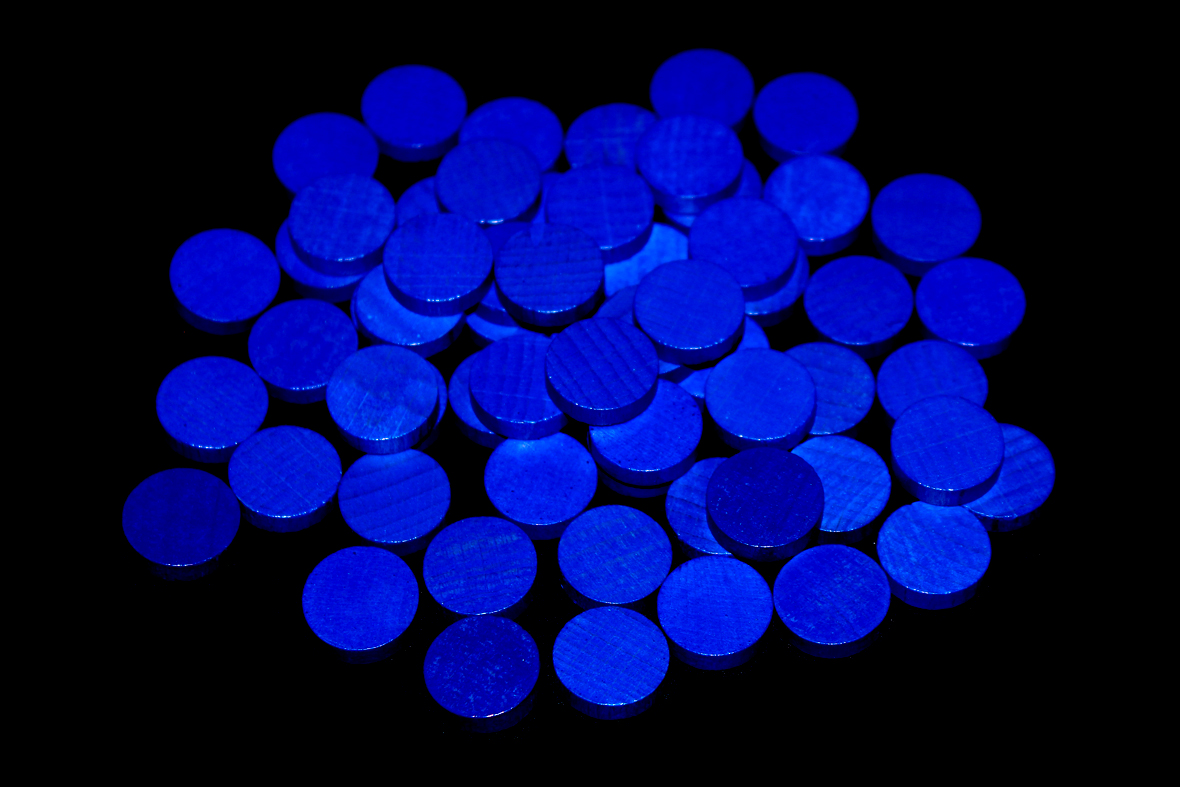 Choose a player to go first, and you’re ready to begin! 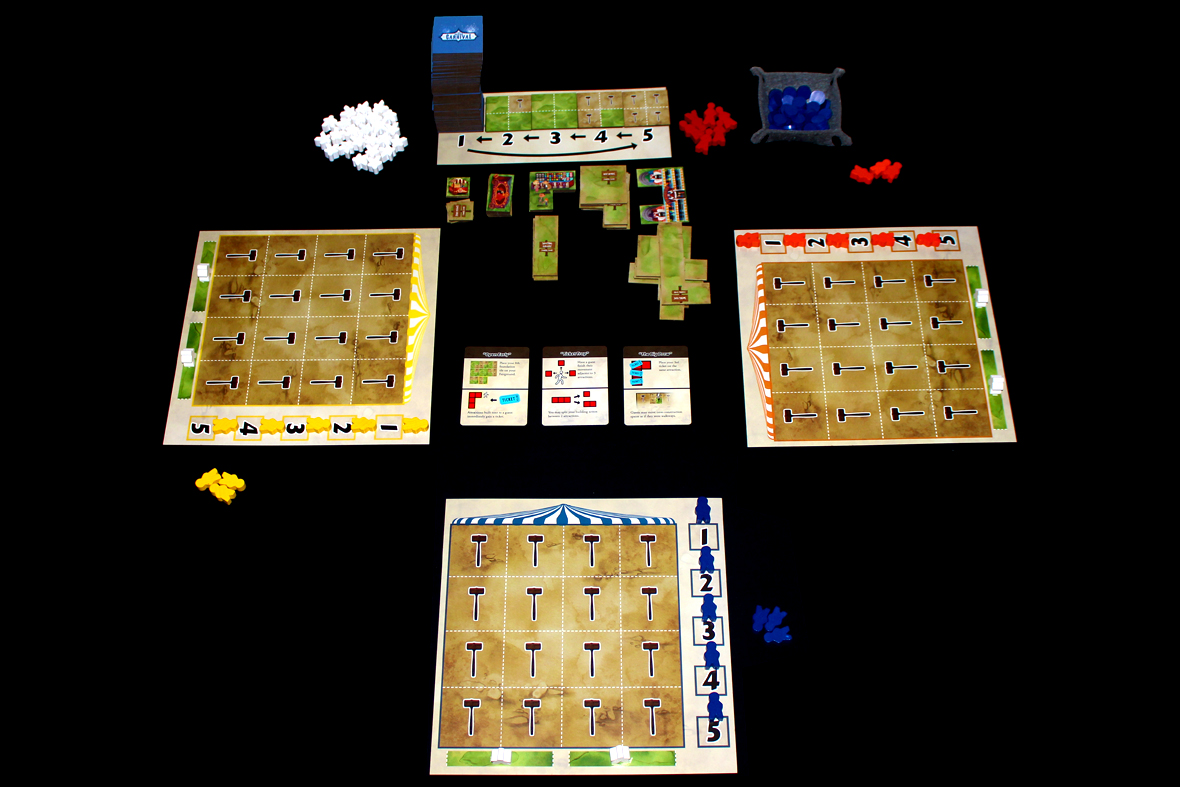 So, the game is played over a series of rounds, in which players take turns choosing actions to perform to try and build up the greatest Carnival in the land. Once the game ends, the player with the most points wins!

On your turn, move one of your unused) Action Tokens from above a number to the number in question, and then choose one of three actions: Place a Foundation Tile, Place an Attraction Tile, or Move a Guest. 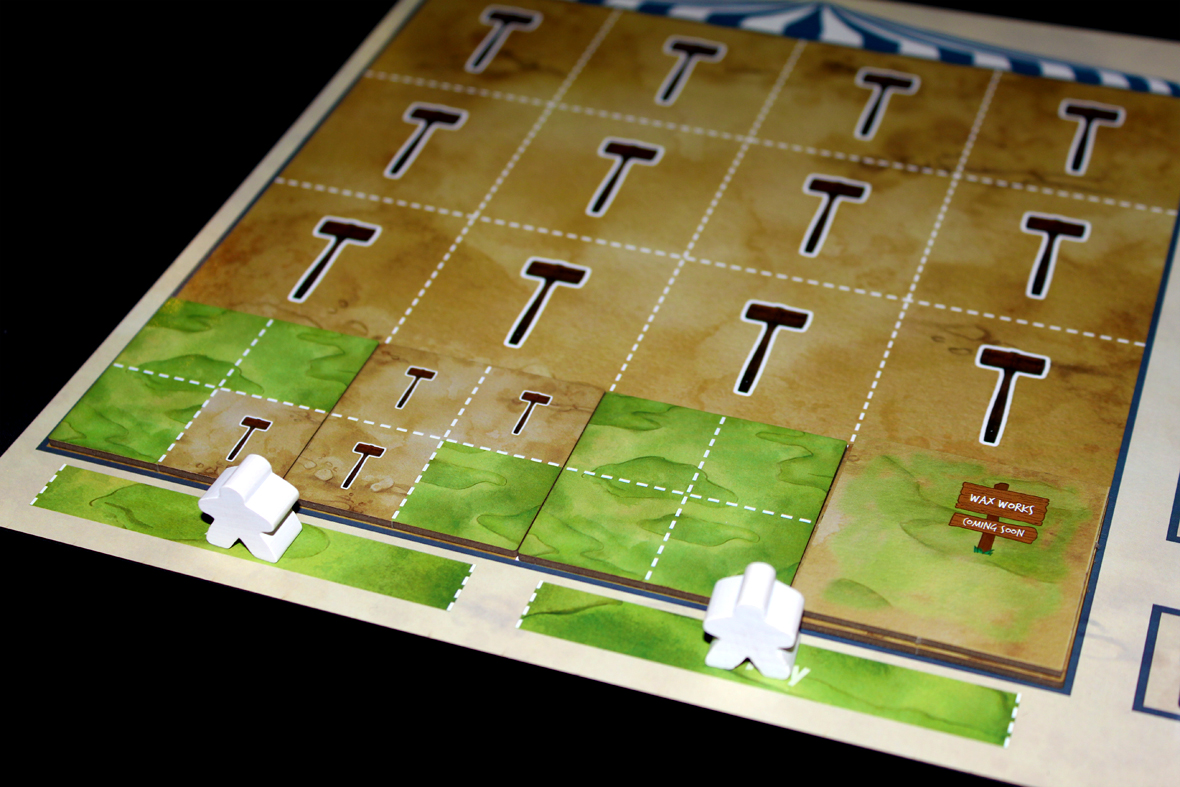 Take one Foundation Tile from the Railyard. You may take any tile provided its Railyard Board number is the same as or lower than your Action Number. If you choose 1, you may draw the top card of the stack, but you must play it.

Add it to your player board by covering up an empty space in your Fairground. All mallets on the tile should be pointing up, towards the big top. Additionally, if you chose 1, you may cycle the Railyard by discarding all the face-up Foundation Tiles and refilling it. Players may not look through the discarded tile pile, but if the stack of Foundation Tiles runs out, shuffle the discard pile and use that as the new stack, face-down.

Choose an Attraction Tile below the Railyard, provided its size is the same as or less than your Action Number. When you add it to your fairground, it must be placed on Construction Spaces, as opposed to the green Walkways. You may not take an Attraction Tile that you cannot immediately place.

You can rotate, flip, or turn any Attraction however much you want, regardless of what the art on the tile would imply.

You may choose a guest on your Player Board and move them into adjacent spaces (not diagonally), following these rules:

After moving your guest, if both of your Entry Spaces are empty, take two new guest pawns and add them to your Entry Spaces. You may also take a Carnival Barker, adding them to any empty Walkway on your Player Board. Carnival Barkers let your guests move farther; for each one in your Carnival, guests move one additional space during a Move action.

If a guest stops moving for the turn next to one or more Attractions, add a ticket to each adjacent Attraction. Note that each Attraction can only hold a number of tickets equal to its size, but you may place the ticket on any space of the Attraction (not just the one adjacent to the guest).

Earning a Trick of the Trade

The Tricks of the Trade Cards give players special abilities and can be earned by completing certain requirements (essentially achievements). If you complete one on your turn, place one of the Action Tokens in your Supply onto that card. Each other player now must complete that same requirement on their next turn or they miss out on the Trick of the Trade for the rest of the game! Harsh, but fair.

Once every player has used all 5 of their Action Tokens, end the round by resetting all your Action Tokens (so that every space is no longer occupied) and passing the Starting Player Marker to the left.

The game ends when any of these three conditions are met:

Once that happens, the game almost ends! All players reset their Action Tokens and every player gets two more turns. Once those two turns have been completed, the game ends, and players total their scores.

The major difference in my mind is that at higher player counts, more Attraction Tiles are in play, so it’s theoretically easier to go deep on one Attraction type. That said, with more players there’s more downtime and more churn, so I would be surprised if you had that easy of a time getting the tiles you want so that you can go deep on that Attraction type. You’ll be using your 5s and 4s a lot more to claim tiles at higher player counts due to churn, I’d bet. Though, you might get lucky and the tile you want slips down to 2 or 3 if enough players want something else or something affordable. As with most racing game elements, you’re also less likely to get all the Tricks of the Trade at higher player counts; like Welcome To, it’s possible that each player pursues a different one at a decent pace, and you can’t be everywhere at once. It’s not a problem, just something to be aware of. The thing that I worry about is how much analysis paralysis your players have; I think that as player counts increase gametime is going to spike unless you’re proactively telling players to focus and take short turns. To that end, I’d probably keep this at 2 – 3 players, personally.

Overall, I think The Grand Carnival is a great title! I’m a pretty simple guy, board game taste-wise; I really like games with a path-building component, I really like games with a tile-laying component, and I really like games that have some sort of polyomino component to them. You can, then, imagine my delight when I found out that The Grand Carnival has all three! Personally, I think the action selection mechanism is really neat, since you can choose how “strong” you want your actions to be at any given time and how to best utilize those in order to accomplish your goals. I will say that this is definitely a game that I lost on my first play because I got too distracted trying to go after every Tricks of the Trade Card (instead of, say, trying to score points), but I generally feel like that’s okay; that’s often a thing I enjoy about games; I like to get caught up in some trivial thing and end up losing the game because I massively overindex on that. It’s half the fun. Plus, the abilities are super cool! They let you manipulate the game in interesting ways. Not a ton of complaints about this game, but I’d definitely say there are a few worth noting. Normally, I don’t bother with art-based complaints on preview copies, but making the tiles green makes it difficult to figure out where the boundaries of the Attractions are; might have been worth making those red. Thankfully, this won’t be an issue with the full-art version of the game, I don’t think. The other is that if you have friends with any sort of predisposition towards analysis paralysis, don’t let them play this unless you want to be there all day. The action selection is a decision, whether you want to reduce the action or not is a decision, and what you ultimately do with the action you chose is a pretty big decision. That … will almost certainly be too much for a few players. If you think you can handle it, or you just like Carnivals, I’d still solidly recommend The Grand Carnival; I’ve had a lot of fun with it!