Full disclosure: A review copy of Son of Doctor Esker’s Notebook was provided by Plankton Games.

Alright, I’m done with EXIT games for a bit but not quite done with escape room games, you know? I need to eventually start trying the Unlock series, you know, since I’ve got all of this free time. Anyways, the latest game in my queue is Son of Doctor Esker’s Notebook, a sequel to the escape room game Doctor Esker’s Notebook that I reviewed like, 150 games ago. Or, horrifyingly, earlier this year (April!). I really thought it was in like, 2018. Scary. Anyways, lemme process my existential dread and you can process this review. Sound good?

In Son of Doctor Esker’s Notebook, the eponymous doctor has vanished once again, frustratingly, and left behind another notebook of clues and riddles that may help you ascertain his location. Thankfully, he didn’t lock you in a dungeon or on a scary roller coaster; he literally just left the notebook and bounced. So you’ve got that going for you. Can you figure out what Doctor Esker wants only you to know? Or will you end up clueless?

The game’s pretty simple to set up. Set out the Solution Cards:

Then set out the puzzle cards:

Take the Start Puzzle and you’re ready to go! 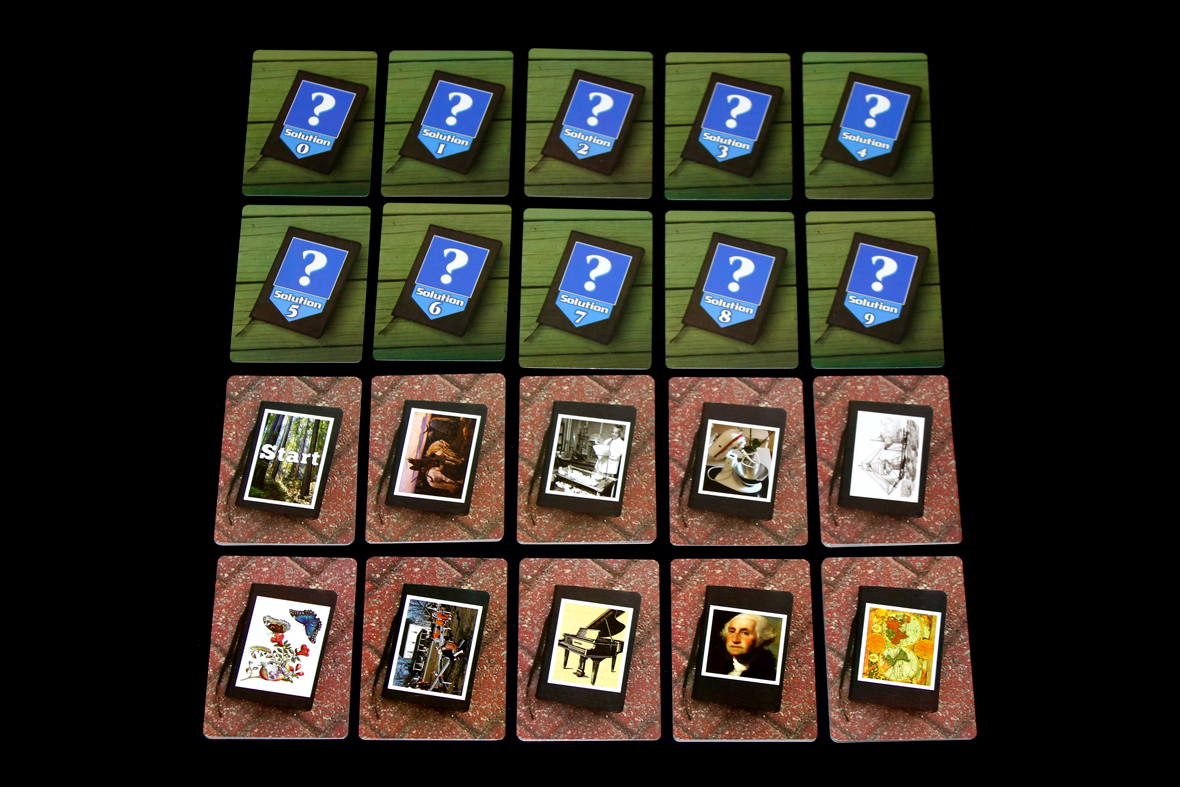 The game’s pretty much the same, gameplay-wise, as the original game. What you do is work through puzzles by revealing all the cards for that puzzle and then coming up with a 2 – 4 digit combination. The puzzle cards don’t require cutting or destruction or anything terrible, but you must get the combination in the right order to have solved the puzzle.

The reason why this is important is that you take the Solution Cards in that order and reveal them. They’ll usually spell out or indicate the next puzzle to do. This might be C O W, indicating that you should pick up and work on the Cow Puzzle, or something else. If it doesn’t make any sense, it’s possible that you might not have the correct combination of digits.

If you’re stuck or need some help (you probably will), you can check this website for puzzle-specific hints.

You’ll know when you’ve completed the puzzles! You’ll need to solve all ten to get there, though.

I think player count doesn’t really matter until some of the later puzzles, where it helps to have more people taking a look at a more spread-out problem. Similar to some of the EXIT games, the Esker games are pretty linear, so there’s not a whole lot of potential for branching pathways in the game. You kind of just do the first puzzle and then move on to the second one. It’s fine, but it means there’s often not a lot for people to do after the second or third person. I think the final puzzle makes it a bit more useful to have additional people, though, so your mileage may vary on the initial puzzles. Either way, I enjoyed playing it at two, but I don’t think that I’d be particularly bothered at higher player counts.

Overall, I think the Son succeeds at surpassing the original. I think there’s a word for that feeling of pride when that happens in another language, but, I’m an American so my worldliness takes an automatic -2. Anyways. Where this succeeds is providing a variety of different and interesting puzzles with a wide array of themes and solutions. Seriously, it’s a veritable menagerie, and that’s awesome. Some of the puzzles are a bit ridiculous, but I think generally this shoots to be more of an “enthusiast’s” puzzle game, in that I find the Esker series to be generally harder (not always in a good way) than the EXIT series. In my opinion, though, that’s a good thing! I appreciate that there’s a wide range of puzzle difficulty out there so that there’s something for everyone. I appreciate that these are flexible, reusable puzzles with a robust hint system (that I wish EXIT implemented, to be honest), and that’s a different type of game than the app-driven Unlock series, the very physical Escape Room in a Box, or the EXIT games. Variety is good for players, and I think the Esker series has that. Particularly, I think Son of Doctor Esker’s Notebook is a marked improvement on the original, and if you’re looking for a challenge with your next escape room game, I’d recommend checking it out!