Speaking of finales, we’ve got one last Oink title for the year. This one came down to the wire; I wasn’t sure I was even going to have this until a couple weeks ago at PAX Unplugged. But I got it. I played it, and now, I’ll review it. I believe that makes somewhere in the neighborhood of 20+ Oink Games titles that I’ve reviewed on this site, so, if you’re looking for a fairly in-depth look at their library, please feel free to check my Oink Games tag. Either way, Fafnir is the last one we’ve got, so let’s dive in and look at this weird chicken game.

Fafnir’s a chicken. And a game about a chicken. But this chicken lays gems. Weird, right? It’s usually eggs. But this time it’s gems. Why? Unclear. Either way, you crave these additional gems, and you know the only way to get them is to try and throw away your old gems and claim the valuable ones. That’s just how things work with this gem-laying chicken. Will you be able to turn your trash into treasure? Or will your failure be egg-ceptional?

Simple, as you’d expect from an Oink. Lay out the main board and the Fafnir tile:

Choose a player to be the first player and have Fafnir point towards them. Give players a player screen: 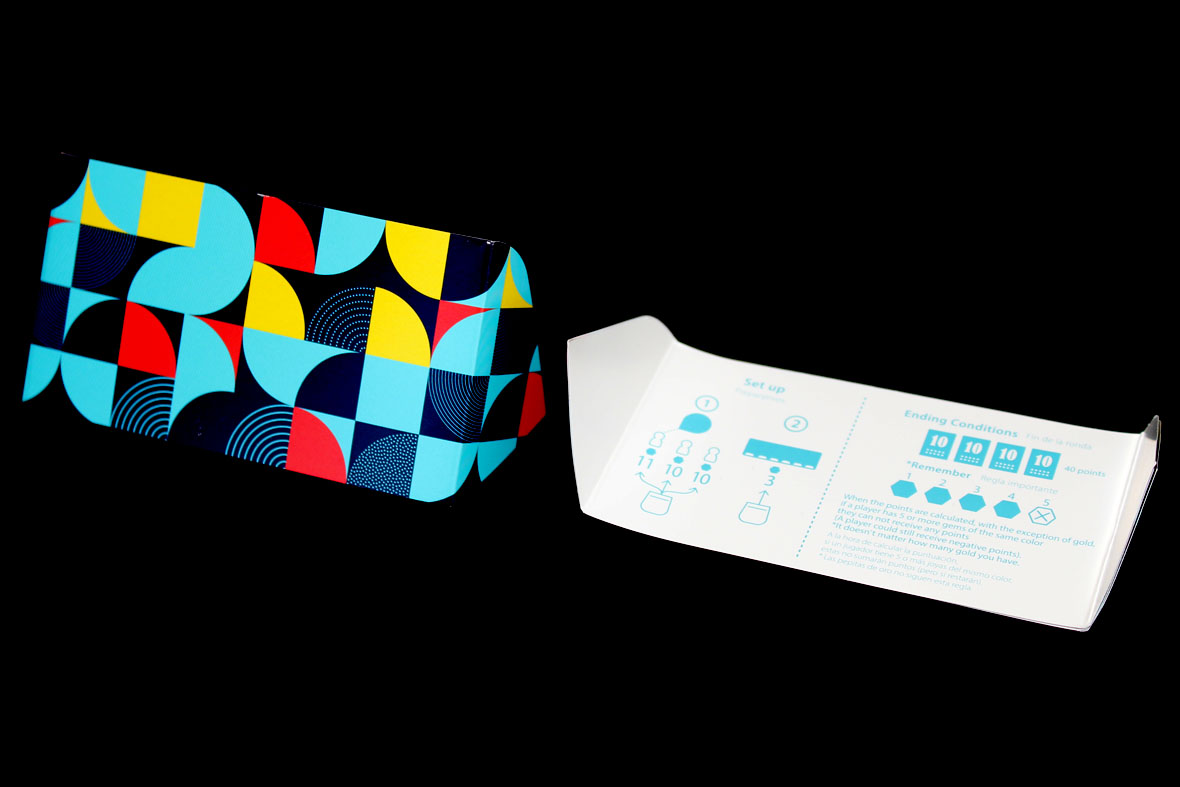 And then, you should give them gems:

The player with Fafnir pointing towards them gets 11; all other players get 10. Once you’ve done that, place three randomly below the main board in columns corresponding  to their colors. Place two more on Fafnir, along with a Point Token: 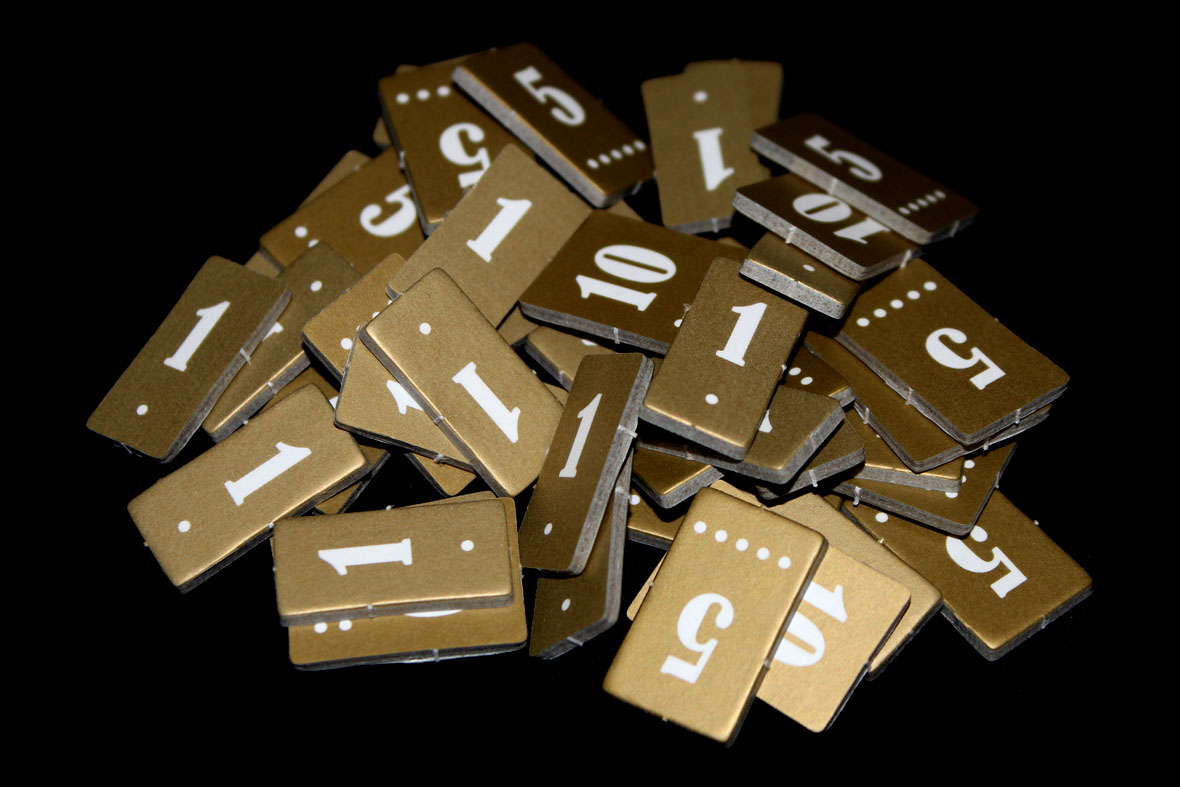 After you’ve done all that, you’re ready to start!

This one’s not too bad in theory, but there are a few subtle points that can be a bit complicated. So, the game’s played over a series of rounds as players work to earn 40 points. Once a player passes that threshold and the round ends, the player with the most points wins!

So, all play happens simultaneously. Players choose any number of gems from their supply that do not match the gems currently on the tile and keep them in their hand. Once every player is ready, they reveal. The player who bid the most wins the bid. If there’s a tie, it’s broken by the player closest to the left of the player who won the last bid. Turn the tile so it’s pointing towards the winner, and they get the gems and point token on the tile. Place their bid underneath the tile in the center, so that the gems create a column moving downwards. Refill the tile with two more gems from the bag and another point token.

If the gem threshold hasn’t been reached, the round continues! The threshold does depend on your player count:

If that threshold has been reached, the round is over! Remove the gems from the main board and return them to the bag. Now, all players reveal the gems behind their player screens and figure out which gem colors (gold excluded) have the most and second-most represented among all players. The gems of the most common color are worth 3 points, the gems of the second-most common color are worth 2 points, all gold gems are worth 1 point, and all other gems are worth -1 points. So that’s a bummer. Ties for color majority are broken in color order, with red beating every color and blue losing to every color. So remember that part.

Once you’ve tabulated scores, reset the game like in Setup and start again! Play until one  player has crossed 40 points; at the end of that round, the player with the most points wins!

I actually like this one, too, at pretty much all player counts (it’s been a rough week for this particular section of the reviews, let me tell you). At two, it’s a bit more intense, since you have a better ability to do a table read (and warmer colors become more useful, since you know that the best another player can do is tie you in one color). At higher player counts, you’re sort of needing to do more deduction based on bids and who is trying to spend what (what do they think is worthless) and who is actually spending what (so you can know how close the round is to ending). It’s an exciting mix of different things. I think the higher player counts interest me more because that’s more fun to balance, but I do like the two-player gameplay as well. So that would imply I have a slight preference for this at 3 – 4, but only a slight one! I’m really happy to play this one at any count.

Overall, I really like Fafnir! I worry sometimes that that’s not that interesting of a take, since I like most of the Oink Games titles anyways, but I think this one genuinely brings in some interesting new stuff. Like I said, the blend of auction-deduction you see in this game is interesting, since usually auction games with hidden money are just about determining who is about to run out of money so that you can grift them. This one’s kind of the opposite; you want to know who has what money left so that you can get your grimy claws into it and share in their profits. Preferably, you want to trick them into letting you exploit them, which is even better. It’s neat! I’m usually not much for auction games, but I appreciate ones where I know exactly how much everything is worth. In a sliding-scale-sort-of-way, this is definitely one of those. Plus, it’s just weird. Why does the chicken lay gems? Why does throwing your gems away make you more qualified to take Fafnir’s gems? Neither of those questions matter, and that experience is so fundamentally and unequivocally Oink that I’ve just come to expect and respect it. It’s Fafnir’s world; we just live in it. That said, it’s also got the common staples; it’s easy to learn, transports well, and is super cute. I’m just really really worried about the damage to the game if you lose even one gem. Are they easy to replace? Is Oink going to sell a replacement kit? It’s not clear. If you’re not worried about that, you love abstract chickens, or you just want to keep buying Oink Games, though, Fafnir’s likely going to be right up your alley! I’ve certainly had a blast with it.