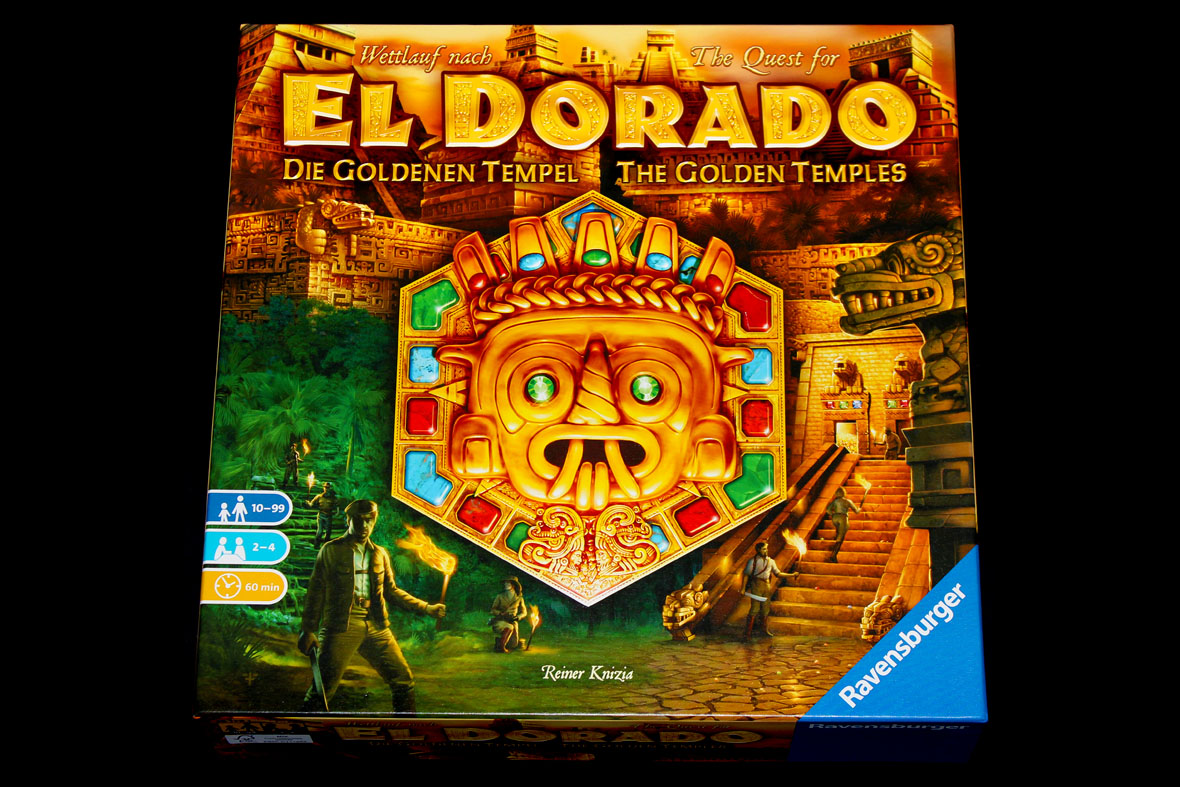 Full disclosure: A review copy of The Quest for El Dorado: The Golden Temples was provided by Ravensburger.

This is always a pleasant surprise. I’m a big fan of expansions, generally, since I tend to like specific games a bunch. This isn’t quite an expansion, though; it’s more like what Funkoverse used to talk about their extra packs: an “expandalone”. This latest game in the Quest for El Dorado line, The Golden Temples, can be combined with the base game and Heroes and Hexes, but it doesn’t explicitly need to be, so this review will treat it as essentially its own thing (with the bonus perk of being able to be combined with a game I already love). Let’s dig into it and see what’s going on in the latest game of the El Dorado series.

In The Quest for El Dorado: The Golden Temples, you already did it. You made it into El Dorado. Nice job! Unfortunately, that’s only the beginning. Now, inside the legendary city of gold, you need to access the Treasure Room if you want to make off with, you know, all the gold. You’ve heard three gems are all you need, but you have two problems to deal with. One you know: the other adventurers also followed you inside, rudely, so you need to get their first. The other you don’t: the temple has ancient guardians that will potentially get in the way. Will you be able to finally claim the treasure that is, according to you, rightfully yours?

Setup is, as usual, pretty similar to the base game. You’re going to take the board pieces:

And put them into one of several configurations (or make your own!):

This means you’ll want to add gems to the three temples, as well:

Give each player a deck in their color of choice: 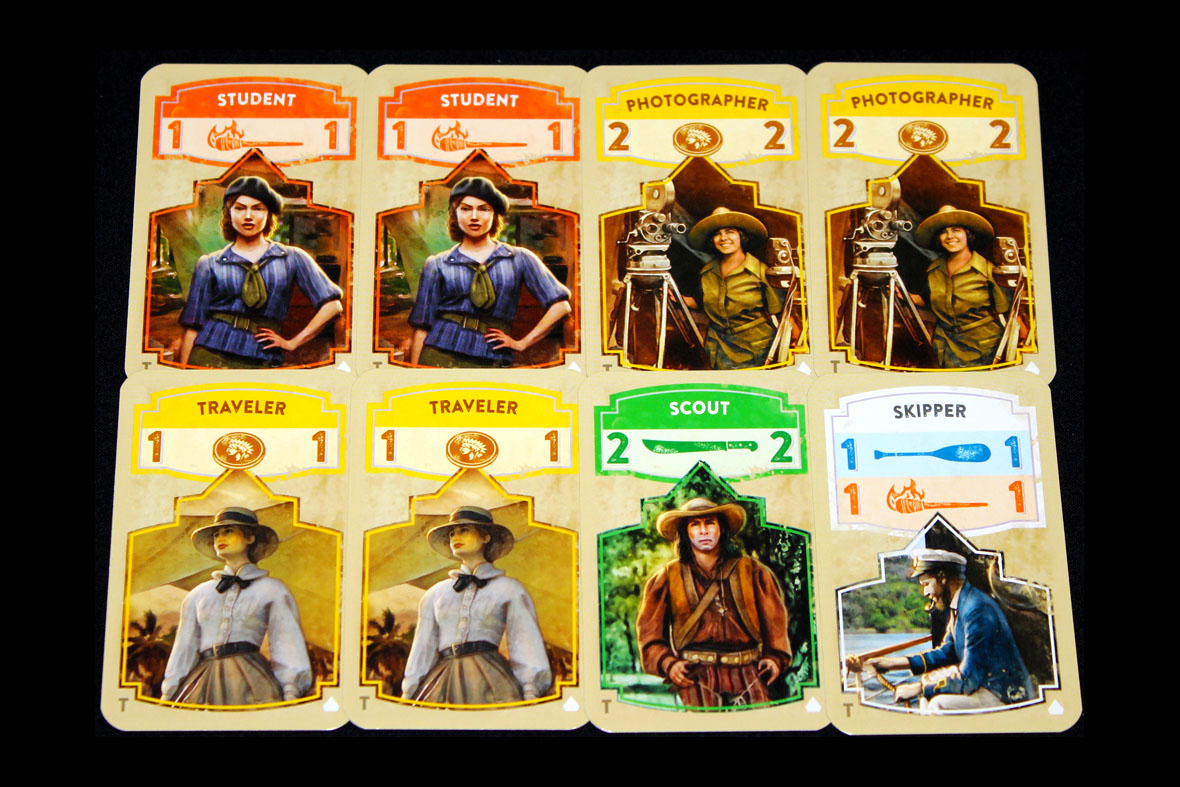 And then give them player pieces in those colors:

Remember, in a two-player game, each player gets two pieces of the same color. Give them a player board in their chosen color, as well:

Shuffle the Blockades and place one face-up on the boundary between each board piece:

Then, add a Guardian Token to each of the Guardian spaces on the board:

Finally, start setting up the Market. Use the starting cards with the initial Market:

Set the other cards up behind it, forming the complete Market:

You should be ready to start! Have each player shuffle their deck and draw 4 cards.

The game plays essentially identically to the base game. In this one, though, rather than heading towards El Dorado, you’re trying to make your way to the Golden Temples to collect gems and earn entry to the Treasure Room. This, naturally, means you’ll have to backtrack a bit more than you initially expected. The first player to make it into the Treasure Room wins!

At the start of a turn, you should have four cards in your hand. The first phase is Movement! You may play cards to move your piece in any direction on the board. A few things, though:

There are a few special spaces and locations:

Certain cards have an X on the sides of them; when played, they’re immediately removed from the game. One-time use!

Once you’ve finished that part of your turn, you may buy up to 1 card by either playing gold cards as gold (rather than using them to move onto coin spaces), spending coins you pick up, or spending non-gold cards as 1/2 gold per card. 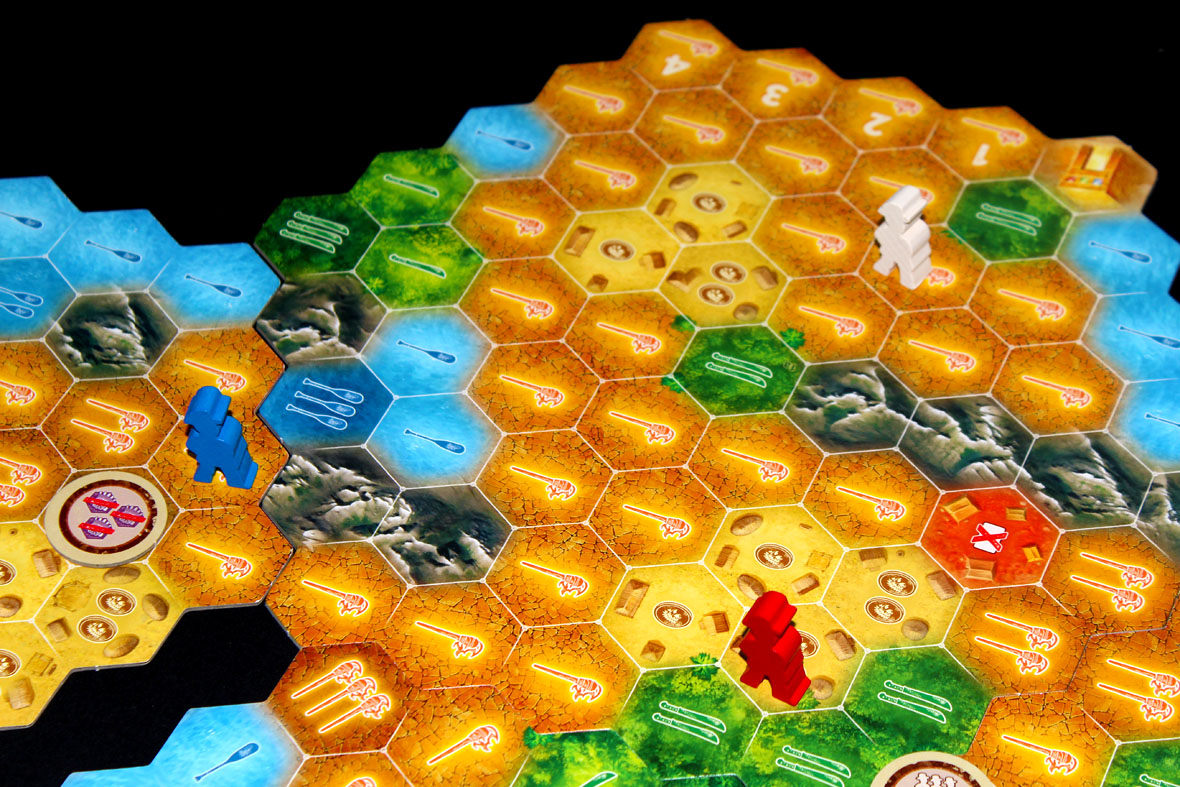 Final part of the turn is simple. Discard all the cards you played, along with any of the cards in your hand if you’d like to do so. You can keep any unplayed cards, but you then draw back up to four cards at the end of your turn. 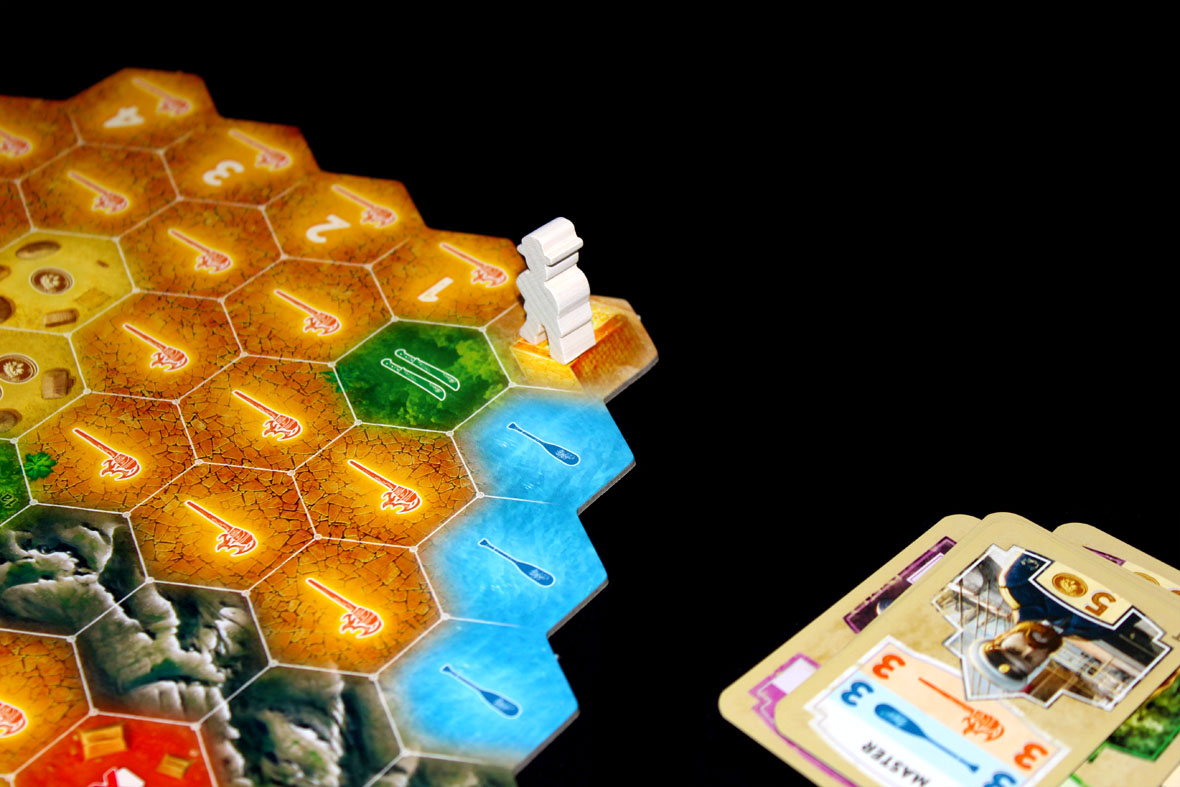 Once a player has made it to the Treasure Room with three gems, they win after the round has ended, so that all players have had the same number of turns. If multiple players reach the Treasure Room in the same round, the player with the highest-numbered blockade wins!

The game generally does a good job to ensure there aren’t a ton, which I appreciate. Normally, blocking would be extremely viable at two players, but since both players use two pawns each to move around the board, it’s largely irrelevant unless you’re trying to make one final block of your opponent’s last piece. They’re not going to be able to trap you somewhere; you can usually get around. Just make sure they’re not tricking you into a circuitous route so that they can duck and run. The one thing to note at four players is that it’s very possible you won’t get some popular cards, since there are only ever three of them. That might be strategic, but it also might be extremely bad for you if you miss out on some cards that are more useful (like cards that generate more money). For that reason, I generally have a slight preference towards 2 / 3, but it’s not a particularly firm one. It’s mostly just a conceit where I’d like to make sure I can always get the cards that I want, and that’s not even guaranteed at those player counts; other players can still buy the cards that I want to claim. It’s just harder for players to run out a stack when there are fewer of them. 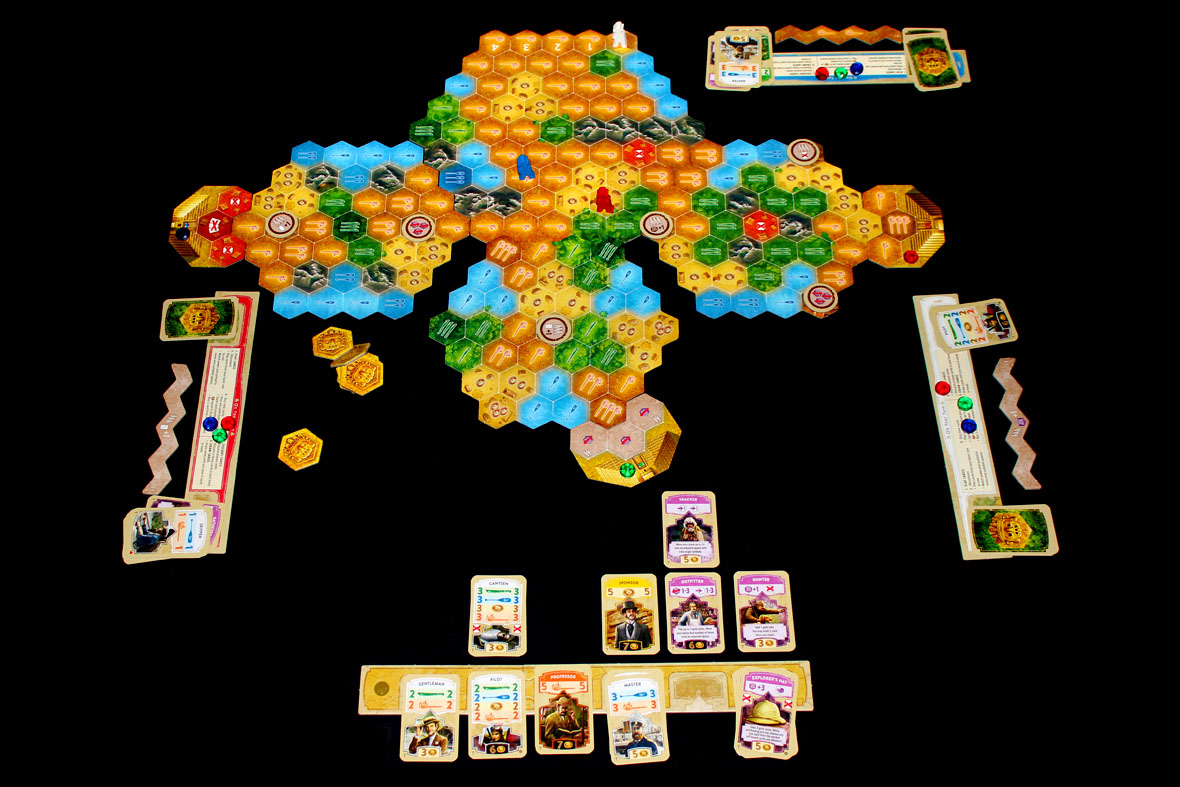 Overall, I like The Quest for El Dorado: The Golden Temples even more than the base game! For starters, the doubling-back part of it is superb; I think that does a really nice job making you think more strategically than tactically, which is part of what you have to do in the base game. The new cards are interesting as well, and they provide different strategies than the base game / expansion, so even experienced players are going to have to think through exactly how they want to approach the new problems. Naturally, I have to mention that its expansion potential is also a net positive, though I reviewed this as a standalone product. I consider that essentially almost absolutely positive, and even if it’s not a good mix it can still be played on its own, so, hard to consider it a negative. There aren’t many negatives about this game, to be honest, for me. My usual gripe persists in that I don’t particularly like tiny cards, but there’s not much you can do if you’re already bought into the The Quest for El Dorado game ecosystem. While it still doesn’t really have much in the way of a catch-up mechanism, the doubling back does make it so that players have to be more thoughtful about the cards they add to their decks, lest they end up stranding themselves through poor decision-making. Beyond that, though, this is still one of my end-to-end favorite deckbuilding games, mostly for the racing element, and I’m always excited to play new entries in the series (pretty similarly to the Dale of Merchants series, now that I’m thinking about other things I need to review). If you’re a fan of deckbuilding, jungle exploration, or you love a good racing game, I’d highly recommend any of the games in The Quest for El Dorado’s series, but if you’re looking for something that tilts slightly more strategic, I think that The Golden Temples is an excellent choice!