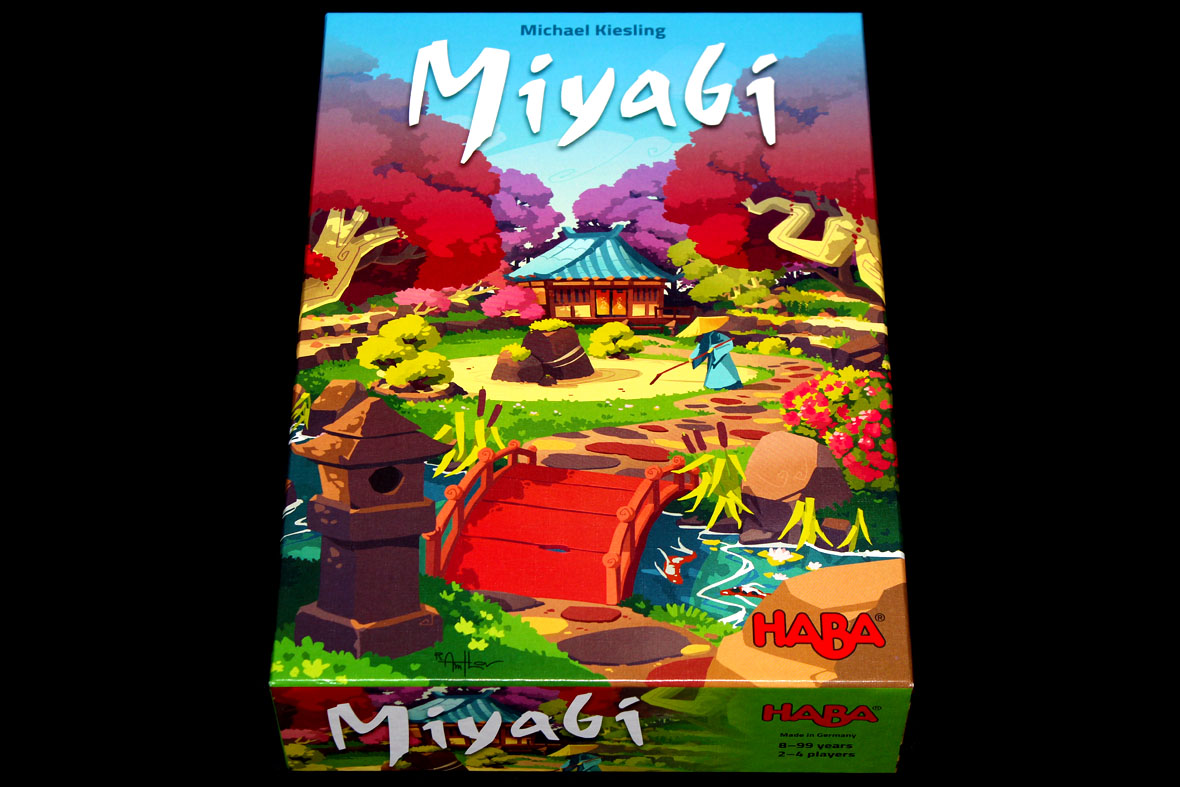 Full disclosure: A review copy of Miyabi was provided by HABA.

One last rally! Not sure what I’m going to do, to be honest. I’ve reviewed so many HABA games, one a week, for the last several months. It’s been exciting! But all good things have to come to an end or at least a temporary delay because all game companies pretty usually release new games on a pretty consistent cycle. To that glorious end, let’s talk about the last HABA game currently in my queue, Miyabi!

In Miyabi, you want nothing more than to tend your new terrace garden, but other players are also making some. Naturally, it’s going to upset you if theirs is more impressive, so you have to challenge them! May the best person win. Everything sort of converges to a point, so a strong foundation is going to be your ally if you plan to ultimately make a garden of note. Will you be able to stand above your opponents’ best efforts?

Ironically, not that much setup. First, place the score board in the center of the table, with the score token on round 1: 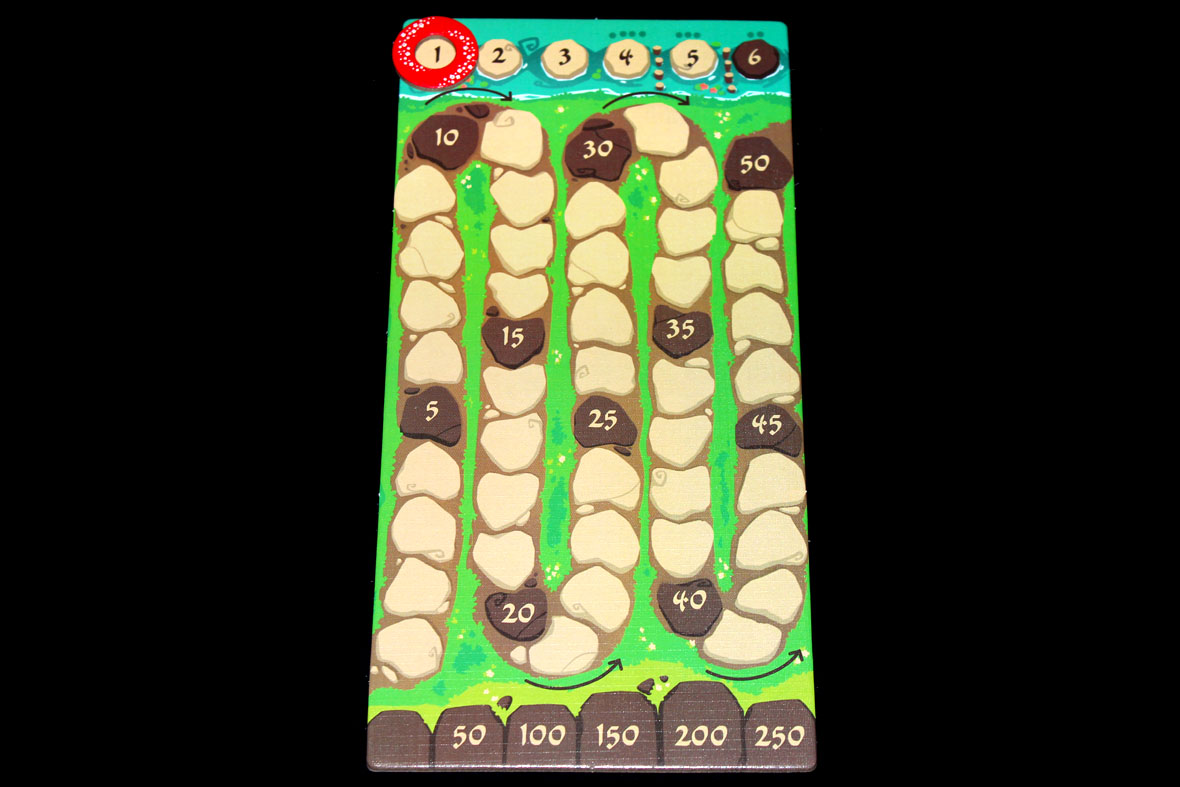 Give each player a player board, next: 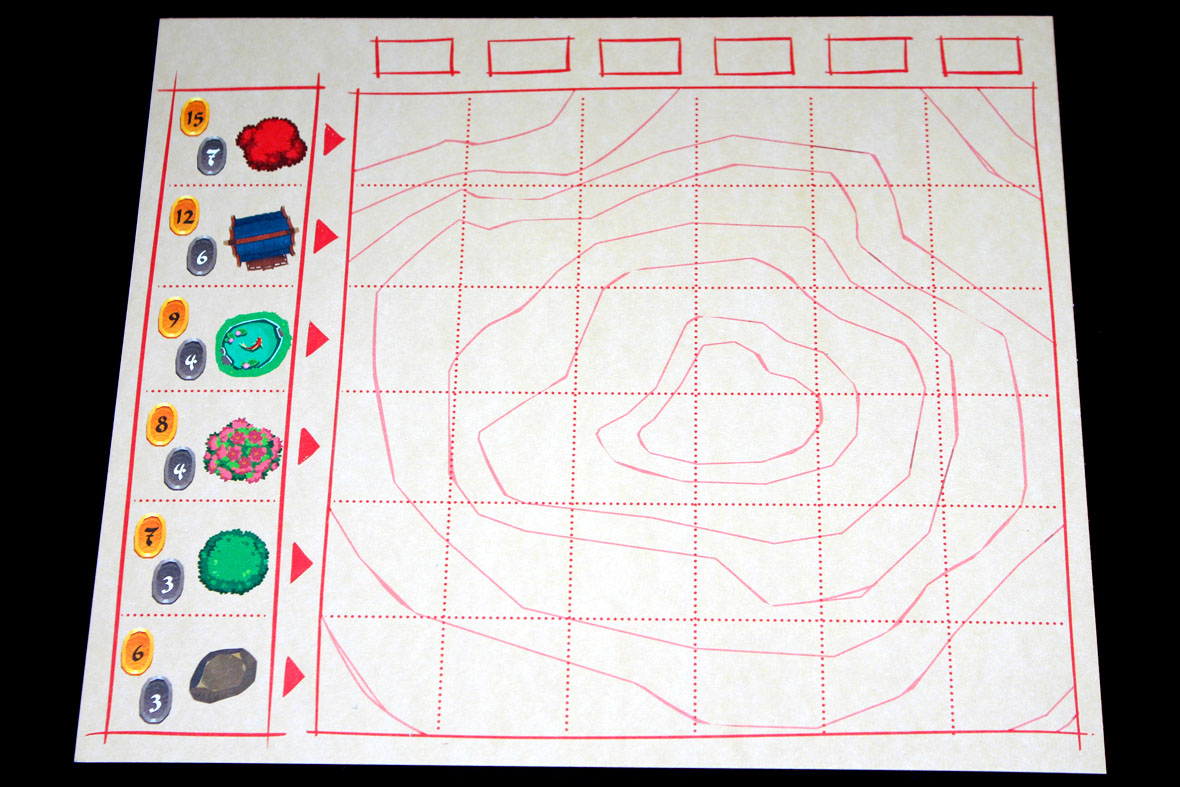 Then, give each player 6 lanterns in their player color: 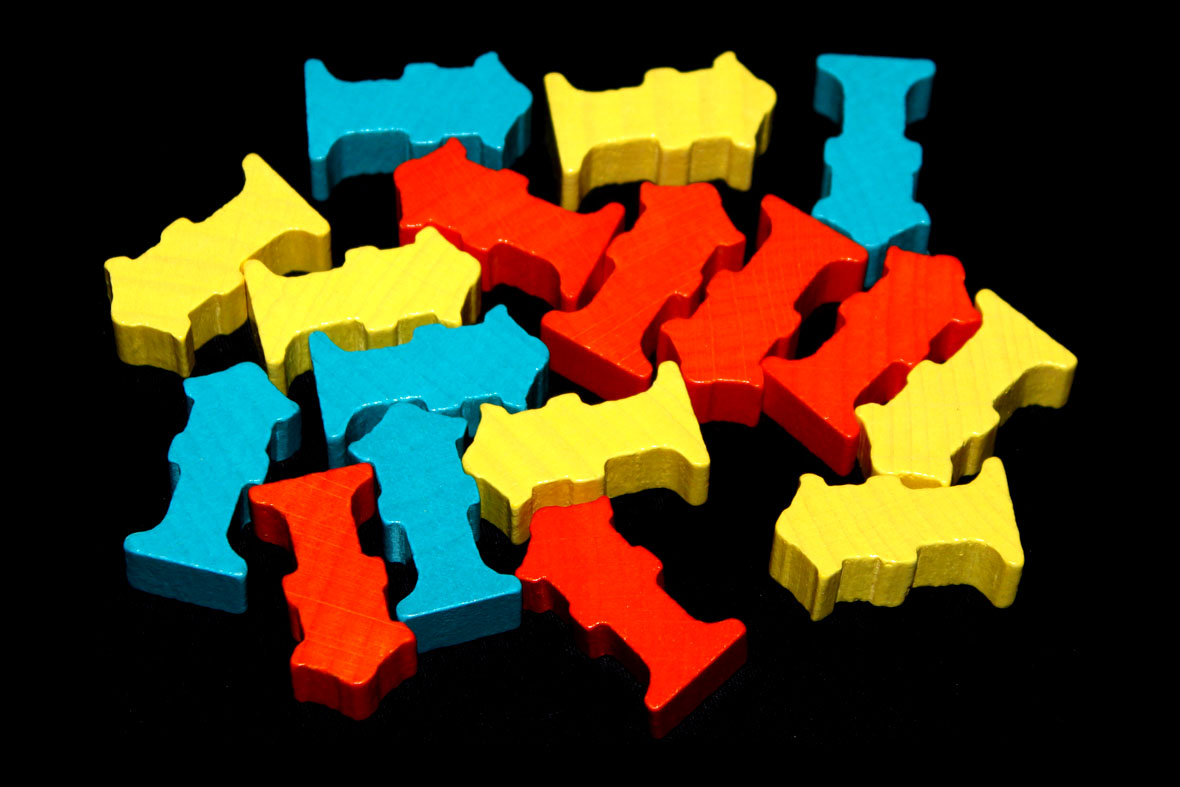 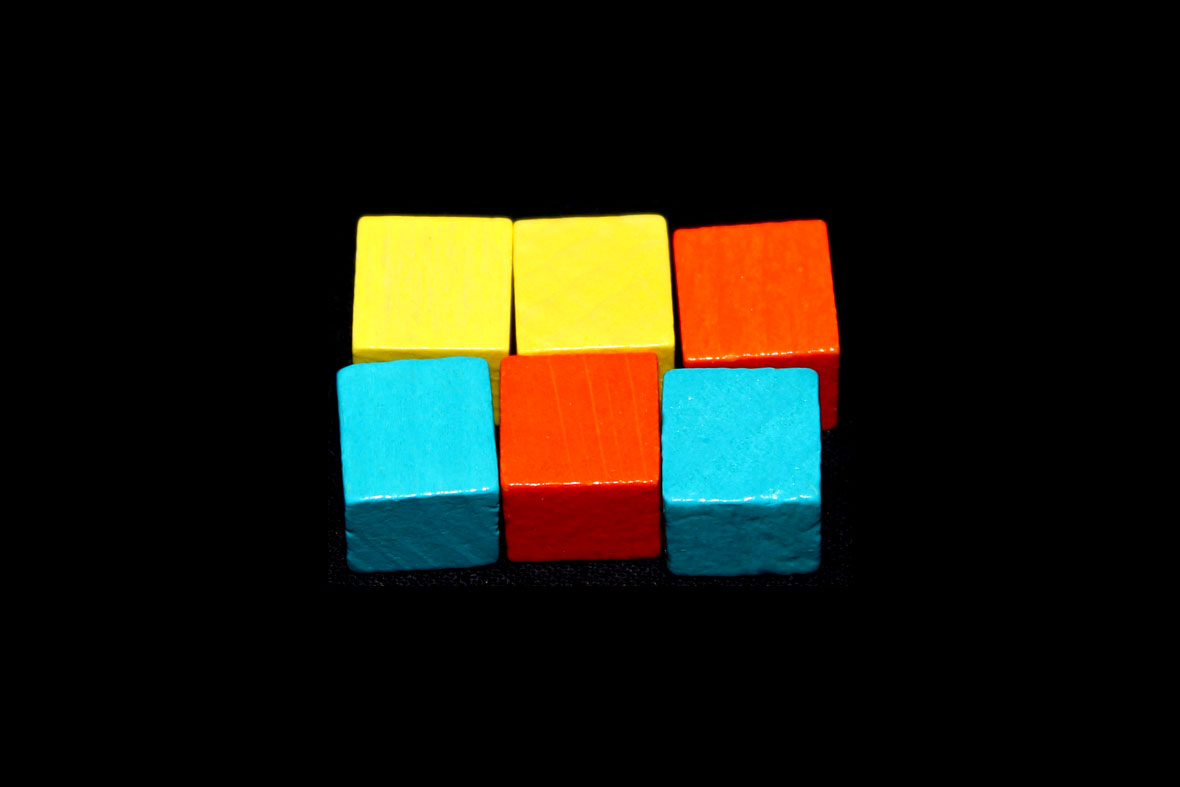 And set out the bonus tiles: 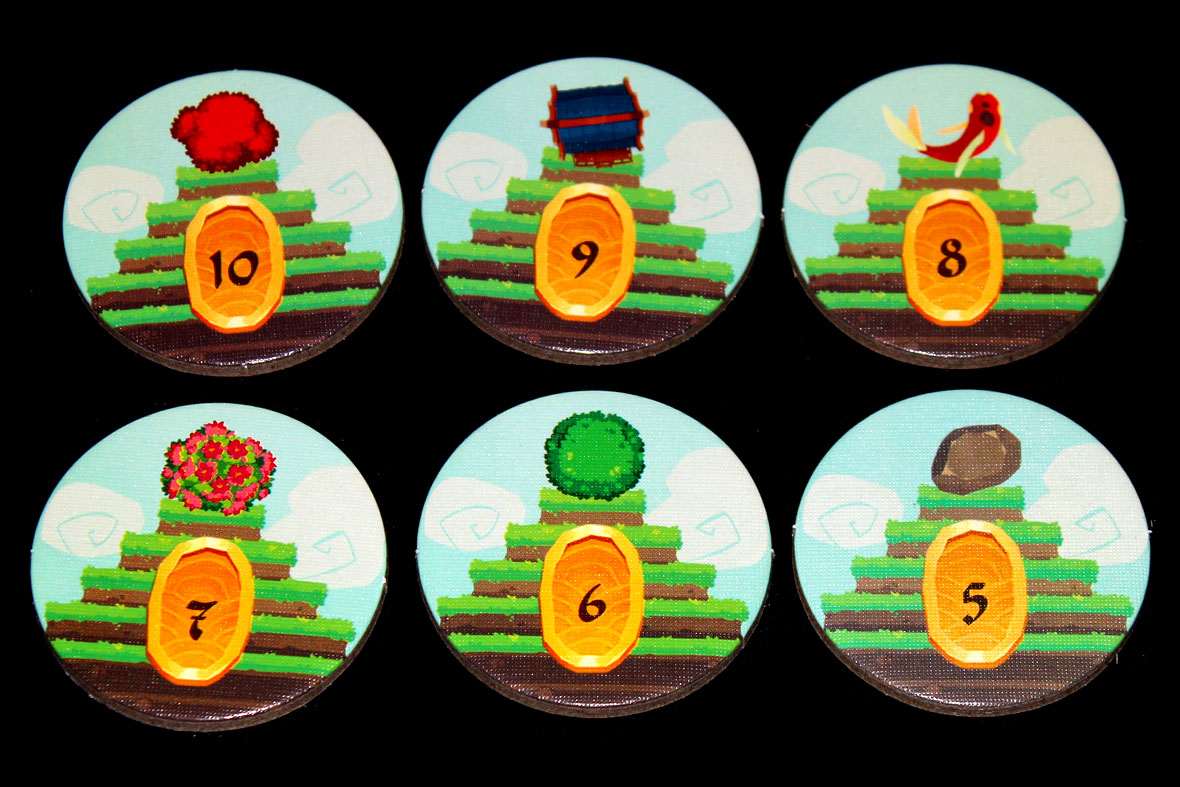 The slightly annoying one is this one; you need to shuffle and organize all the tiles of each size. Once you do, you’re roughly ready to start! 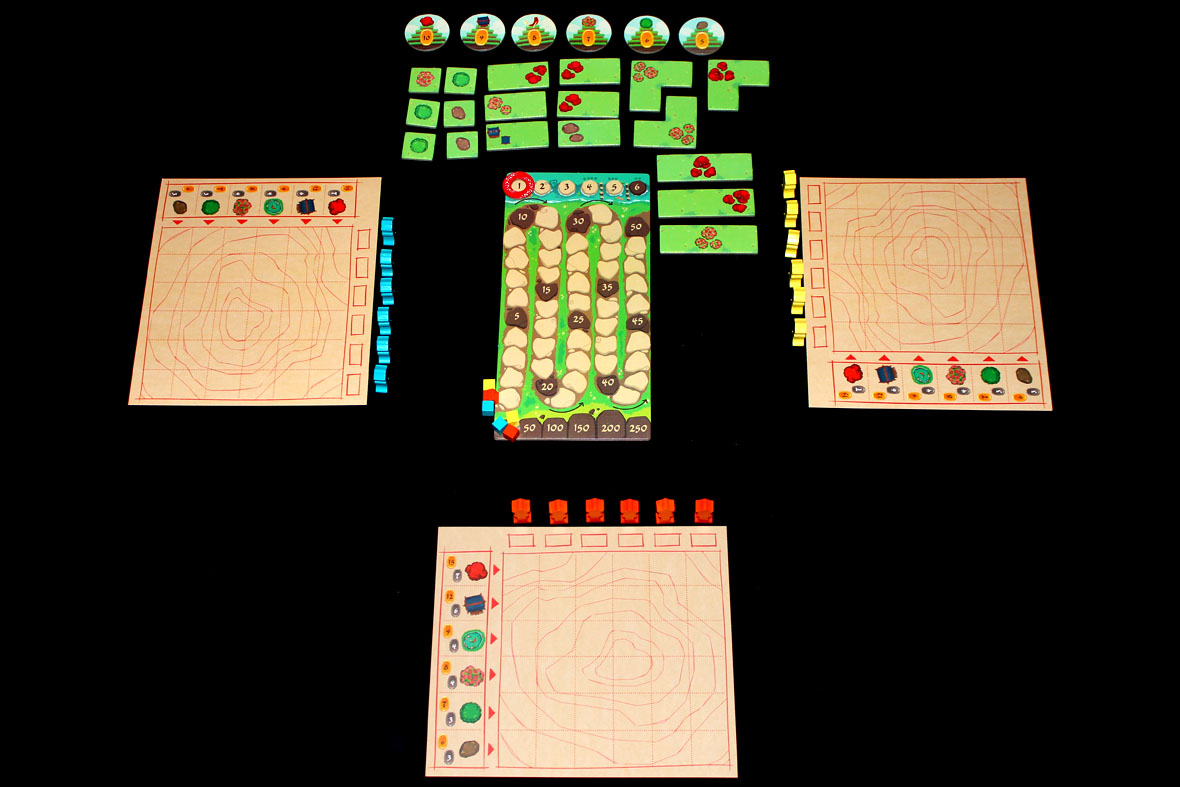 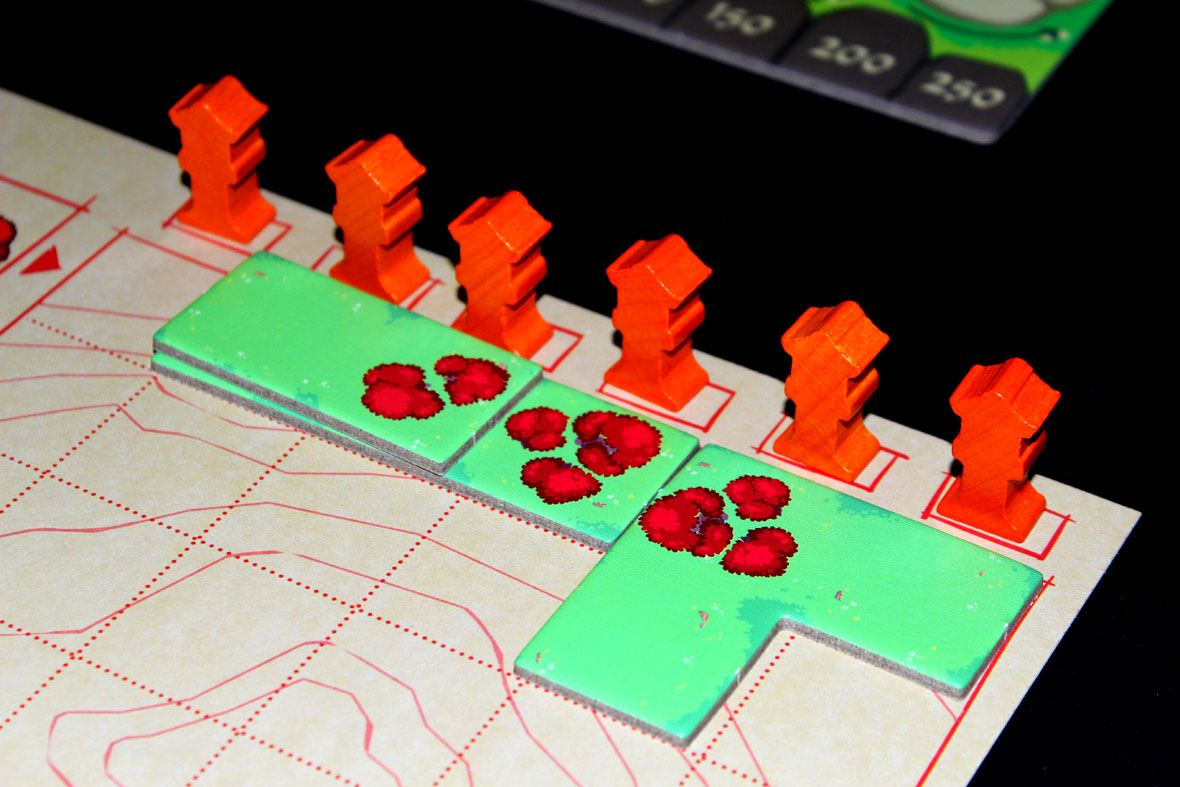 A game of Miyabi is played over a few rounds. During each, you’ll draft tiles to add them to your terraced garden, building it up both figuratively and vertically over that time until the game ends. When it does, the player with the most points wins! 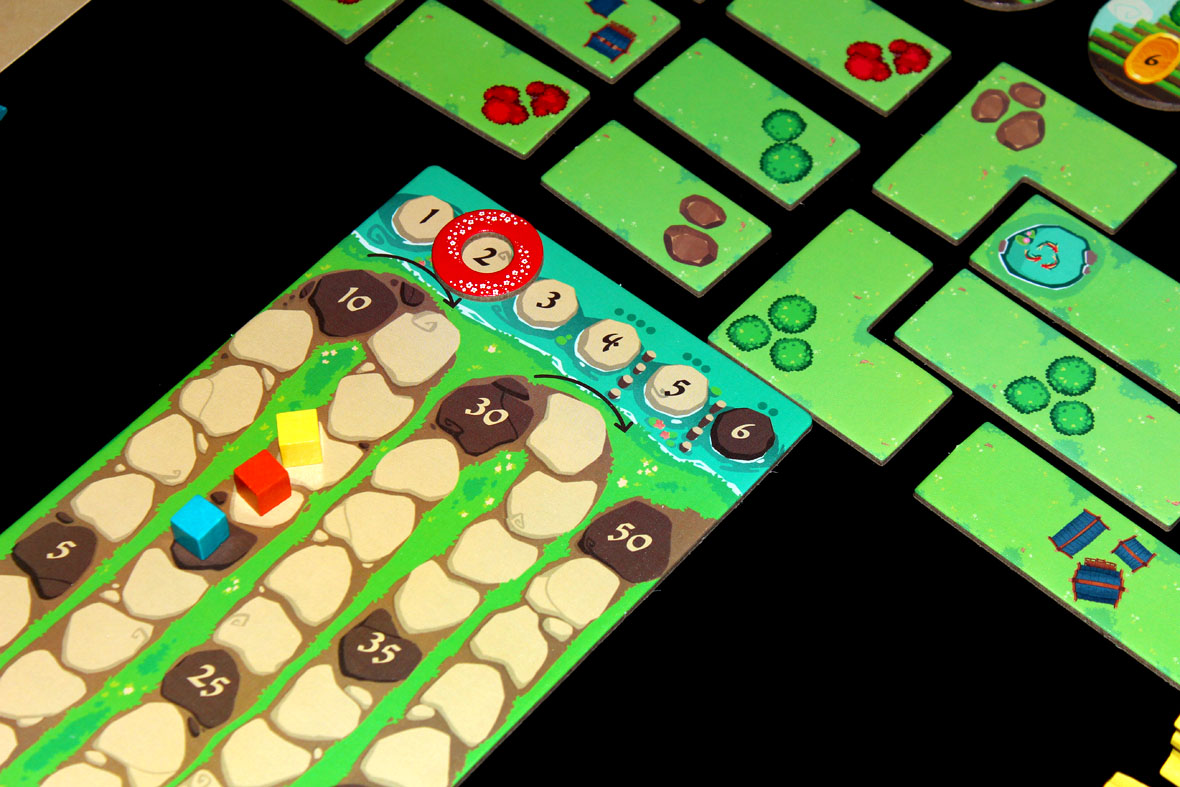 Each round is set up before you start playing by randomly revealing tiles of each of the four types: 1s, 2s, 3-corners, and 3-straights:

Once you’ve got that set up, the round can start! Each player will take at most 6 turns. On your turn, choose any face-up tile and add it to an available part of your garden. 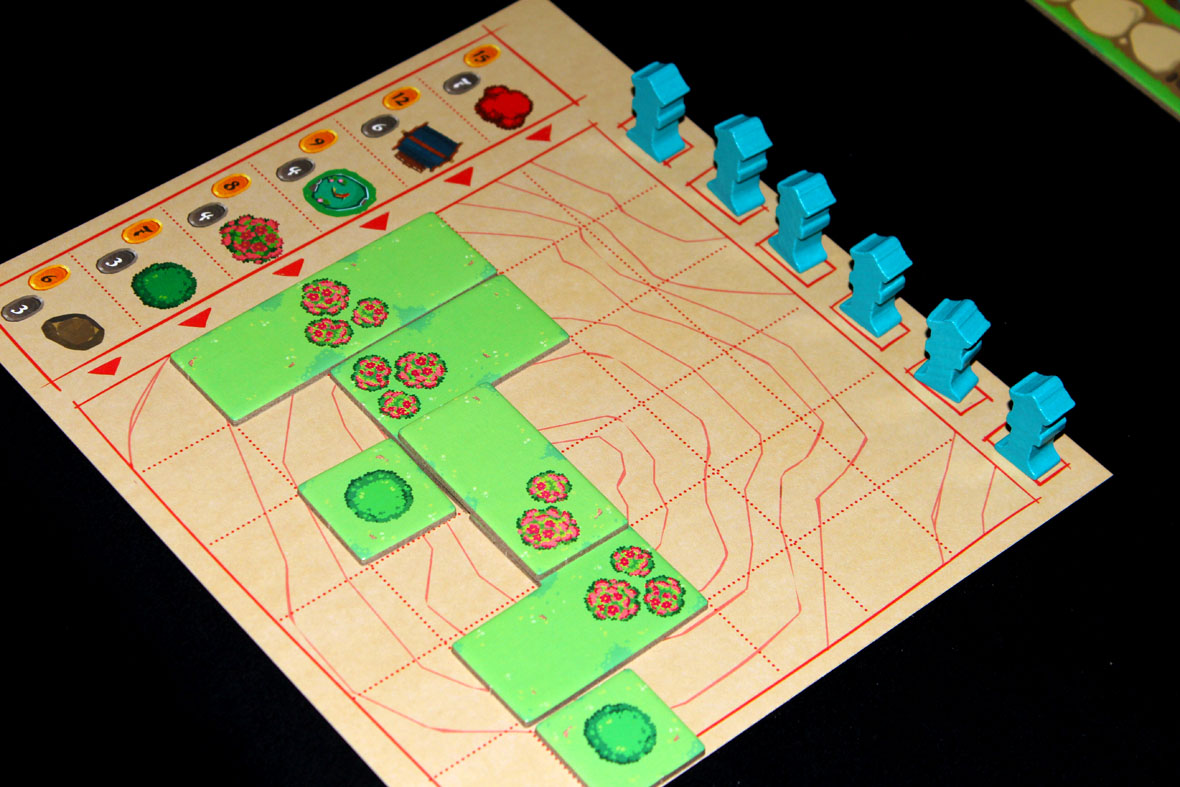 What does available mean? Well, on each tile there’s objects, and each tile must be placed following some rules:

If you cannot place a tile following these rules, your turn ends. Otherwise, place a lantern on the space matching the column you placed the objects in, and you then score the tile as follows:

You score the number of objects on the tile times the tile’s height. So a three-object tile on level 4 is worth 12 points. Move your scoring marker ahead to track that. If you place an object on the fifth level and you’re the first player to do so, immediately gain the points pictured on that object’s bonus tile and then remove it from the game. 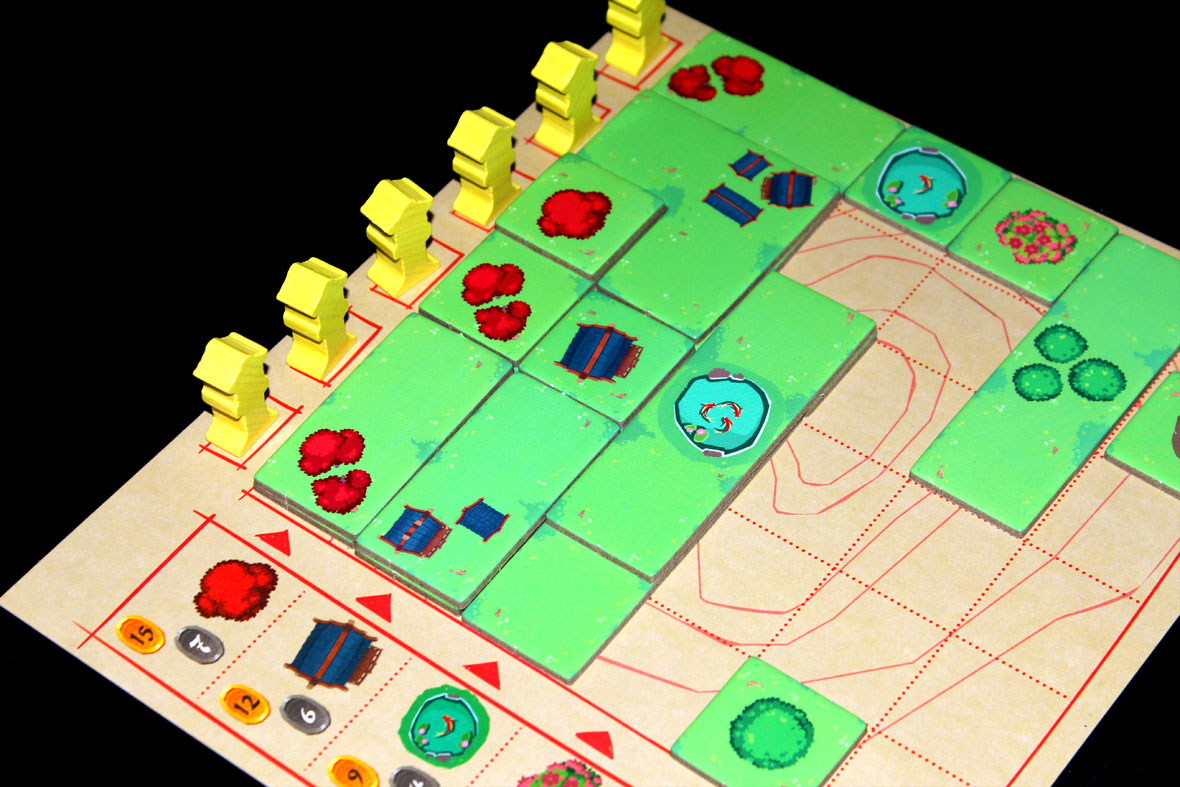 Once all players have placed all six of their lanterns or passed, the round ends. All unused tiles are removed and players move their lanterns back above their player board. Start resetting the round again by following the instructions at the top of this section. 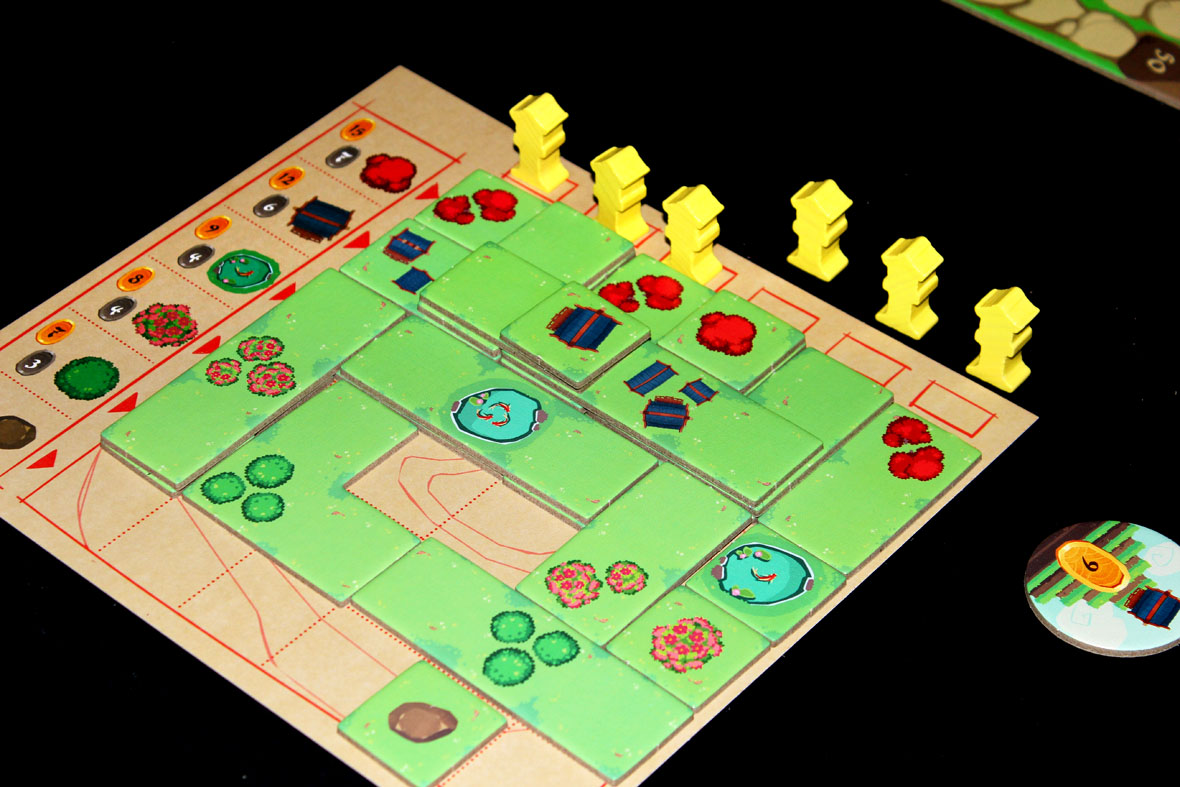 If that weren’t enough, there are also expansions that add new elements to the basic game, such as scoring adjacent groups of objects or adjacent empty spaces, scoring for surrounding a single object, scoring for having groups of 7 objects in rows and columns, and even a friendly froggo! I’d recommend adding them in if you want to further increase the complexity of this game, but thankfully they’re mini-expansions and not terribly taxing to learn.

Not really a ton in theory; it’s another one of those things that I refer to as that weird line between expectation and variance. Since there are more players, you may potentially have access to more large tiles on your turn. Will you be able to get that many more? Probably not; it’s likely that they’ll be fairly evenly split between players. But, at higher player counts, there’s more of a chance that they won’t be, and that split could potentially benefit you. That’s the nice thing about these kinds of drafting games; that possibility could happen! The problem is, it’s not a terribly interesting possibility, so I regret highlighting it in its own paragraph about player count differences, sorry. Another thing that’s actually worth worrying about is the breakdowns of the rows may not work favorably for you at higher player counts, since there will be more competition. More types of objects aren’t added, so, it’s really the same number available but with more players vying for pieces of that pie. It means you may want to prioritize depth over breadth, where you can, whereas at two players you do have a bit more room to explore (even if you’ll ultimately take the same number of tiles over the course of the game, generally speaking). I don’t have a strong preference for a particular player count, for this one, though, as a result. 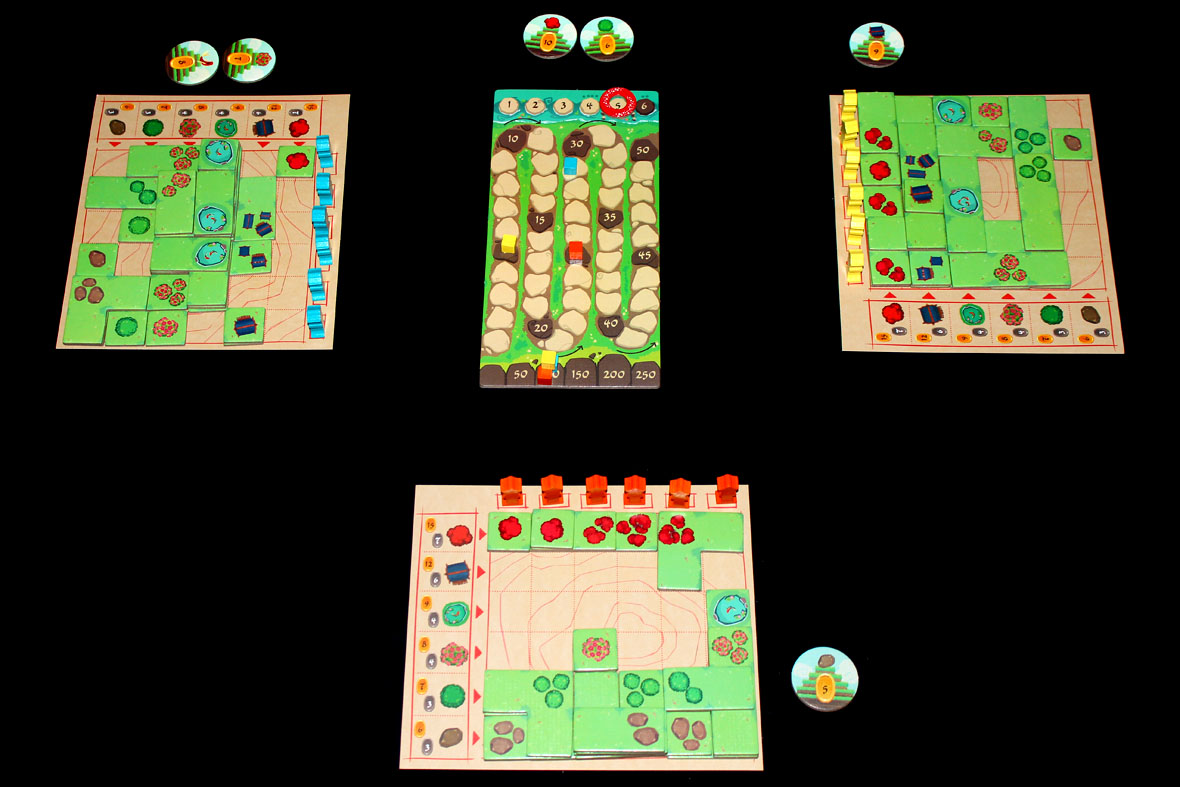 Overall, I like Miyabi! If you’re asking me to be a bit unfair, then yes, I’m aware I scored it slightly below NMBR 9, and I’ll stick by that; I prefer lighter games, generally, as they’re easier to teach, set up, and get played. That said, this one, while being a step up on the strategic scale, is also worth the increase in weight, I’d say. It’s not approaching heavy, by any stretch of the imagination; I’d say Tiny Towns, for instance, is the heavier of the two by a long shot. But I think that that’s nice, honestly. It’s good to have a wide variety of games with related mechanics at various weight classes; it means that you can tell someone, “oh, did you enjoy this game? Are you looking for something heavier but in a similar boat?” and if they say yes, you can show them Miyabi. That’s cool! It helps people find their weight niche, and I think that’s great. I think I’ve warmed up to it a bit as I’ve been playing heavier games in the last several weeks, as well, which has been a nice bit of a break from my usual light games (don’t worry, more doujin game reviews are coming and they’re all fairly light). It’s nice to vary your perspective every so often; makes you a better reviewer and all that. And Miyabi is definitely going to be on the far end of the scale away from NMBR 9. I think you could make an argument that they’re both casual games, sure, but this is strategic-casual at best and NMBR 9 is firmly casual. I find that interesting, personally, and I’d love to explore what other games have similarly weighty partners. Anyways, I do love games with a vertical element, and I particularly like how physically weighty this is (nice tiles always help; jot that one down), so if you’re looking to step it up a level from NMBR 9 or you’re wanting to see what games HABA’s putting out there on the more strategic side, I’d suggest taking Miyabi for a spin! I’ve found it interesting.