Full disclosure: A review copy of Tuki was provided by Next Move Games.

One more from Next Move! They sent over a couple games and I reviewed them. The previous one, 5211, I grabbed a couple weeks ago; fun little card game. Now, we’re on to Tuki. I’ll try an Azul or something someday. Still writing this one on a plane, which is fun; I’m hoping the Arctic theme will cool me down, as this is currently the hottest plane I have ever been on in my entire life. Somehow, the guy sitting next to me is wearing a heavy coat, which makes it even hotter. I don’t know what’s happening, but I doubt it matters that much to you; let’s get into Tuki.

In Tuki, you play as builders constructing Inuit tukiliks, which are objects that carry a message. They tend to be person-shaped, too, which is cool. Unfortunately, if you’re anything like me, you’re only so-so at building, or should I say so-snow, since you’re going to use … snow … to help you … build them. You know what? I committed to it, and I’m not going to edit that. It’s staying there. Will you be able to construct the most tukiliks? Or will you end up having a snowbering experience?

Setup’s pretty easy. Choose which difficulty you want to play with (3 / 4) and get out the required cards:

Give each player a set of stones: 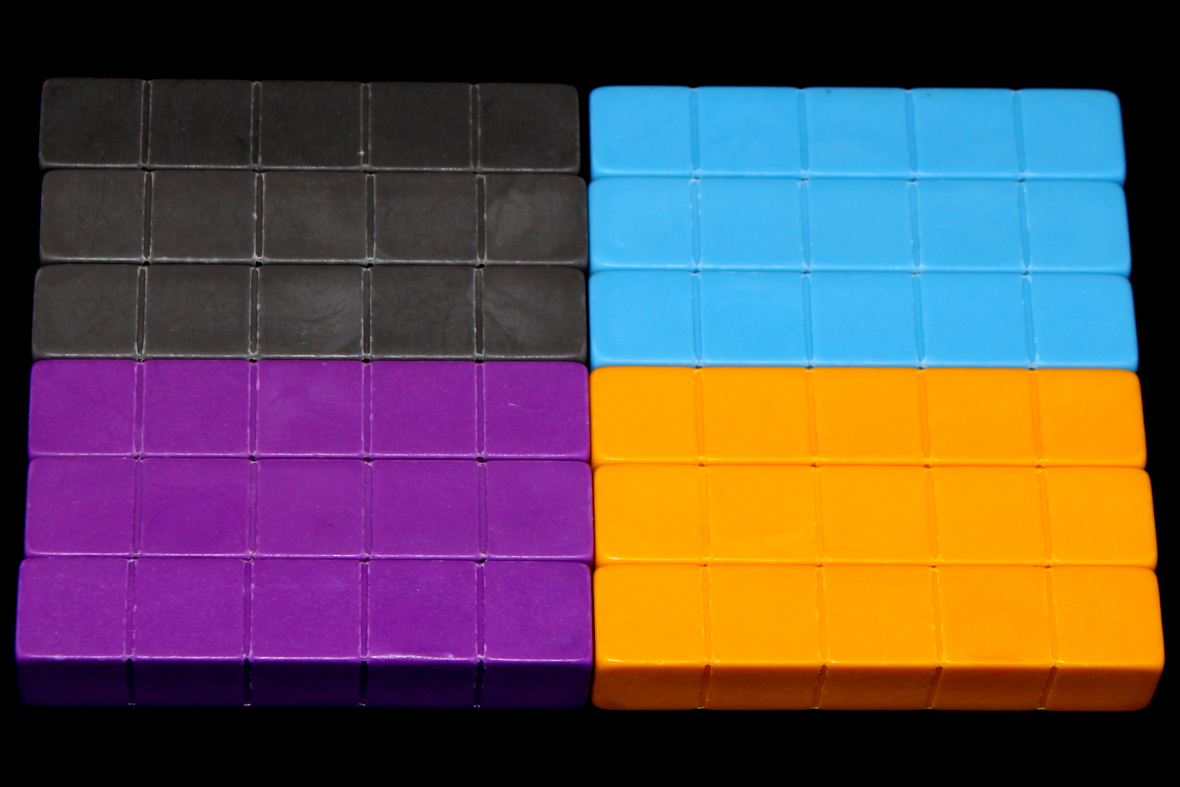 Note that there are only 3 sets; in a 4-player game, there’s always one player sitting out. So that’s fun. Once you’ve figured that out, set out the die:

And give each player a set of snow blocks: 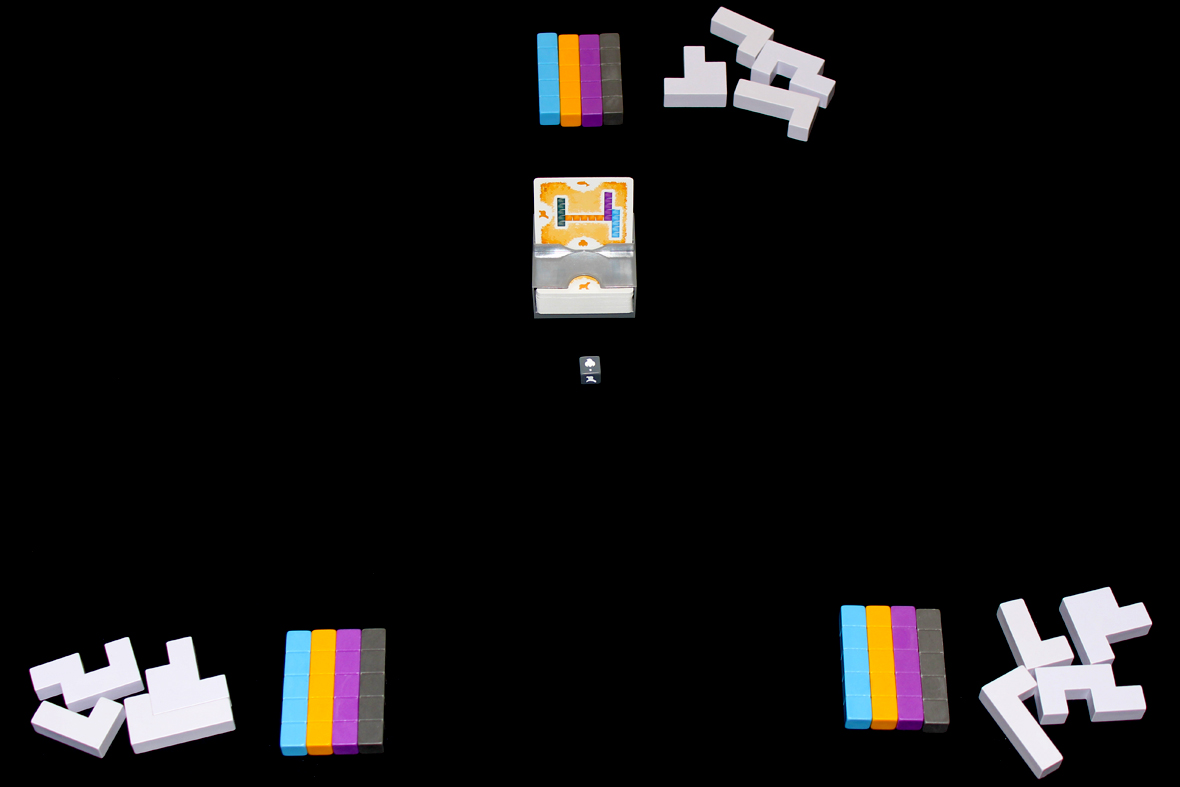 Not a ton here, which is pretty nice.

To start a round, roll the die and orient the card such that it has that symbol on the bottom of the structure.

Basically, once the round starts, you just build the structure as quickly as possible, based on its orientation (you’re looking at it such that the bottom of the structure is touching the table).

Are you a bit confused by the structure? That’s reasonable; nobody can build most of those structures as-is. Thankfully, you’re allowed to cheat a bit with some snow blocks; you can play them to build off of and nobody will be the wiser. If the die had a filled in square on the face you rolled, then you also must build the structure such that none of the color blocks are touching the table. Maybe a layer of snow would help?

Once it’s complete, you’re safe! This game’s not about being first; it’s about not being last. If you’re the last player to finish their structure, you take the card; it counts as a point. And yes, points are bad. Note that if you said you were done and you weren’t, you take the card as a point even if you finished earlier. If you’re playing at four players, since you only have three sets, the player who just scored a point sits out the next round. It makes the game take longer and is almost like playing.

You can kind of keep doing this indefinitely, but generally I recommend playing to 3 or 5 points. When that happens, the winner changes: at two players, the player with fewer points wins.

At three and four, something ludicrous happens. The player with the most points is eliminated, and the remaining players with the lowest scores face-off in a final round. The player who wins that round wins, regardless of scores.

No real difference between player counts, save for the weird endgame conditions. At higher player counts you have a sudden death-sort-of-thing happening where the highest-scoring player is eliminated and the remaining players play one final round to find out who wins. The big difference is four players; weirdly, the game only comes with three sets, so the four-player version of the game is to have one player sit out every round and they rotate in for the player that just scored. This allows players to accrue points more slowly, I suppose, which works as a catch-up mechanic, but it doesn’t really let everyone play at the same time, so I’m pretty aggressively side-eyeing that “1 – 4 players” on the box. The solo game is just building the structures for fun, which is fine. Live your best life. 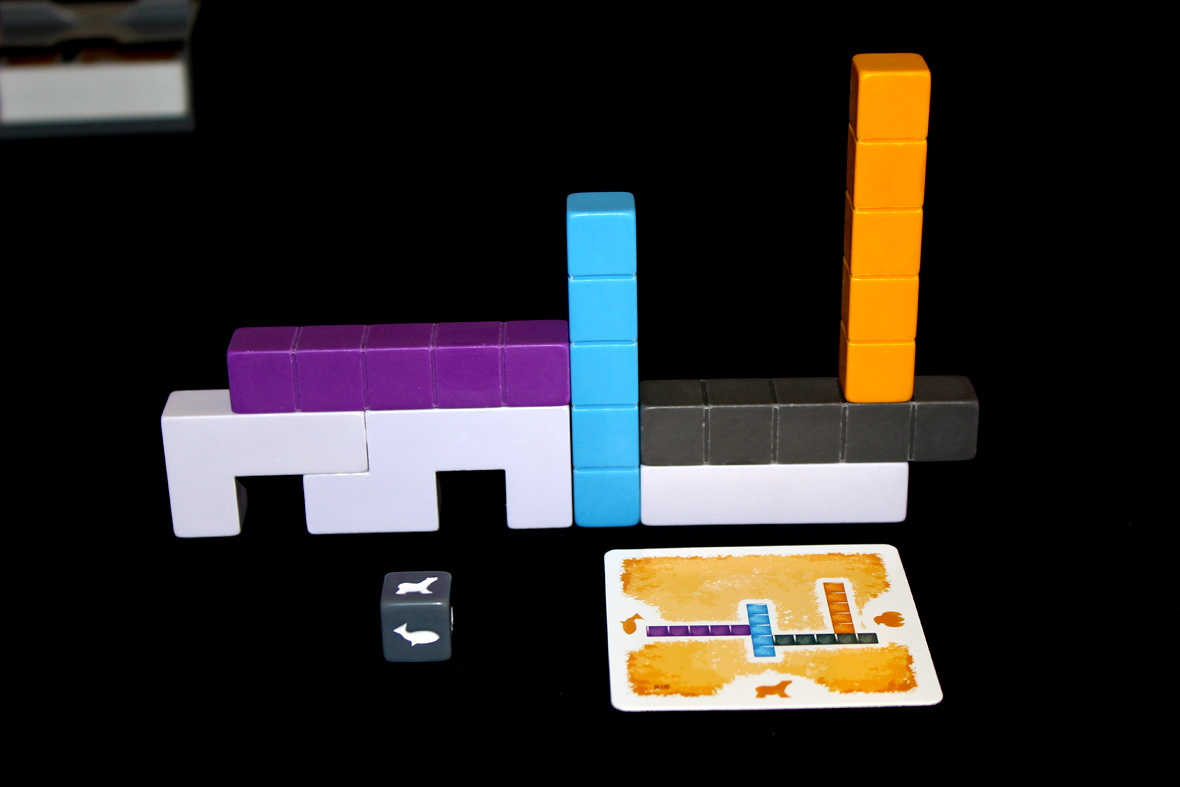 Overall, I think Tuki is solidly fun! I really like that there’s the challenge of constructing a structure that you can’t entirely figure out; it reminds me of the Dimension Tension mode in TEAM3 PINK. Half the trouble is just trying to figure out what you’re building, and then you still need to build it; and it’s all real-time? I love that kind of stuff. Naturally, a lot of my friends do not love that (my friends aren’t the biggest fan of real-time), so, looks like I might be breaking out the snow-lo game for this one. That said, there are some things about this game that are a bit weird. The finale being sudden death can be odd, especially if there’s one player who’s far and away doing better than the other players, score-wise. That will likely frustrate that player, but, I mean, gotta go fast. My real gripe with this game is that calling it a four-player game when only three people can play at a time is kind of … nonsensical? It’s like saying the soccer commentators are also playing soccer. I would definitely not recommend this if you’re looking for a game you can play with four young players who don’t do well with sharing; you’re going to see some fights over that. That said, if you’re looking for a fun mix of dexterity, real-time, and strategy, I have enjoyed this quite a bit. I think the snow blocks really do add an interesting dimension to the game that I haven’t seen in other dexterity titles. If that sounds appealing to you, I’d recommend checking out Tuki! I’ve certainly enjoyed playing it.