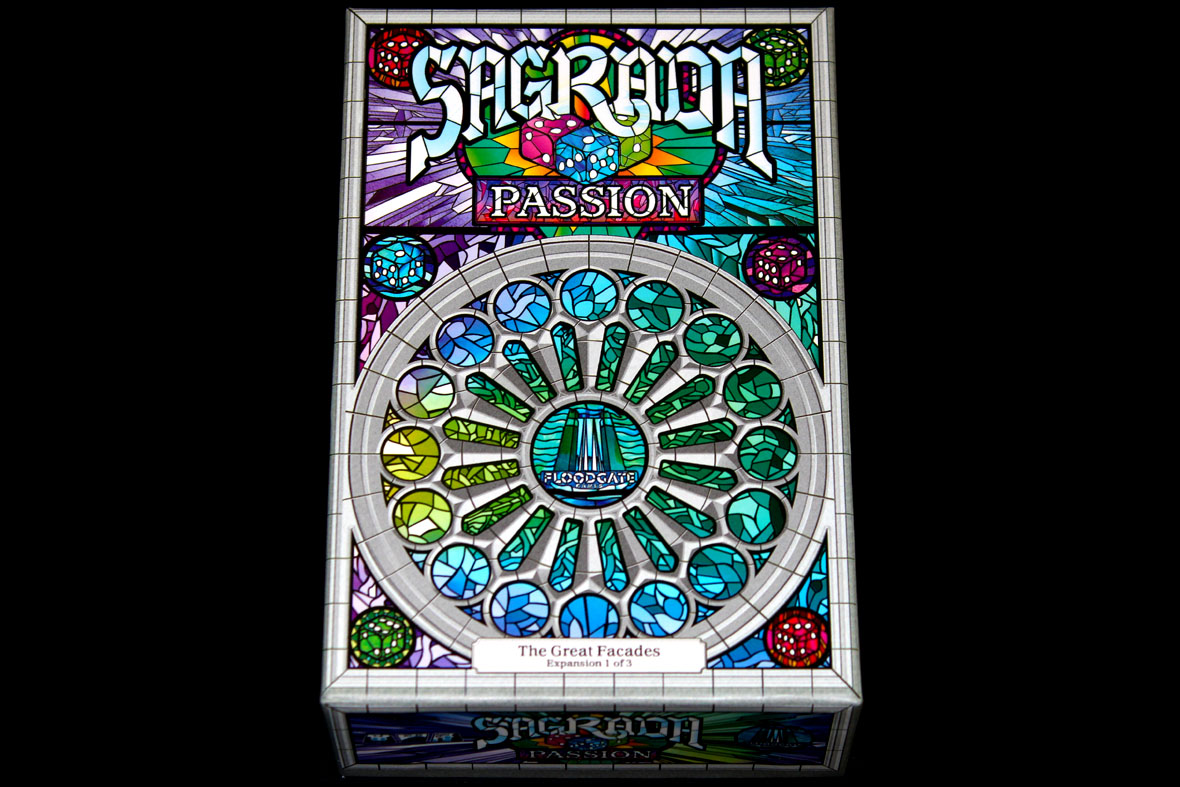 Full disclosure: A review copy of Sagrada: Passion was provided by Floodgate Games.

New year, new games! It’s taken me a bit to get to this one, but that’s why … we don’t particularly make scheduling guarantees, anymore. There are so many games. But I’m here now and I’m back to reviewing! Live from Seattle, at least, where I’ll be from now until OrcaCon 2020. Without divulging too much of my future schedule plans, let’s see how the latest Sagrada expansion goes.

In Sagrada: Passion, you’re completing The Great Facades with some stained glass purpose, now. This is the first of three mini-expansions for the widely popular dice drafting game, and it purports to add Rare Glass Dice, Inspirations, and an increased focus on symmetry. Will you be able to meld together a cohesive strategy, or will it just end up being a pane?

So, like I said, the expansion is a bunch of additional modules. You’ll want to factor them into certain setups in certain ways. For photo reasons, we’re going to be using all of them, so, get hyped?

These are essentially player powers, so, not much else to tell, there.

Rare Glass Dice are sort of the crux of this game; they’re very fancy dice you can use for various things. First, before selecting Tool Cards, select a Rare Glass Dice Board: 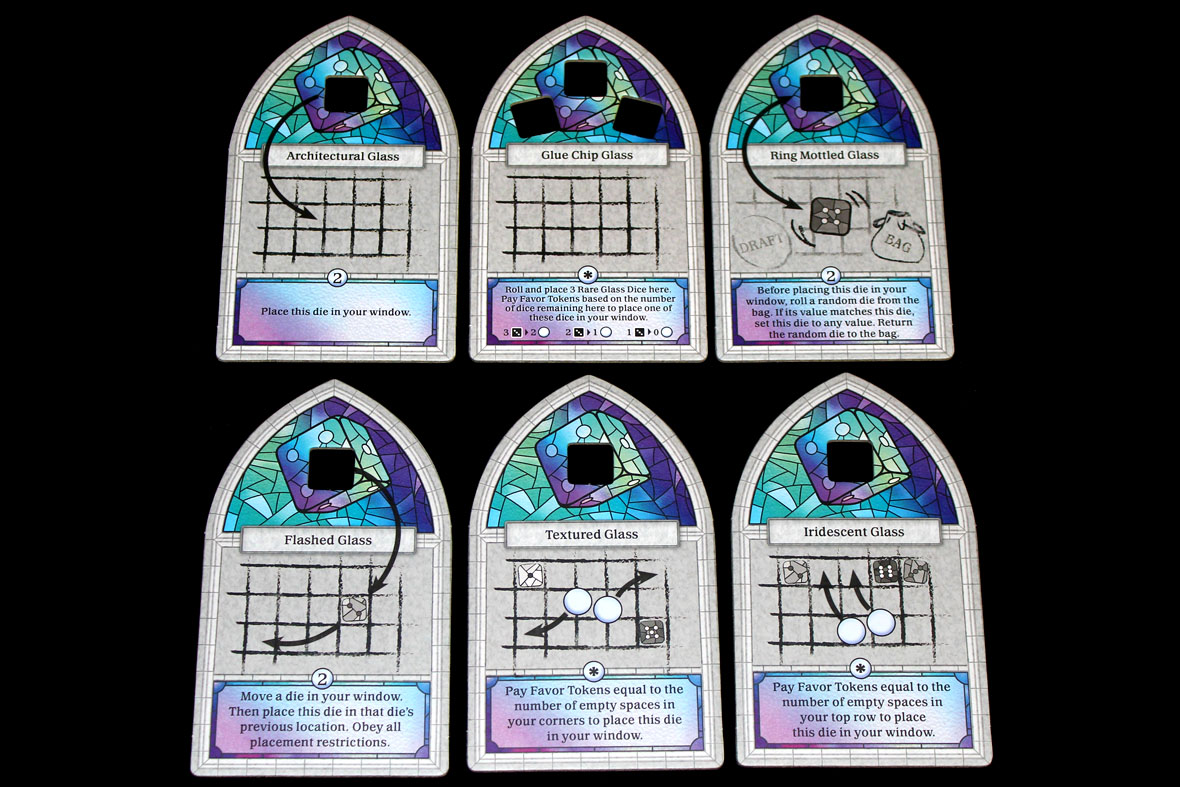 Then, roll and add Rare Glass Dice to the slots: 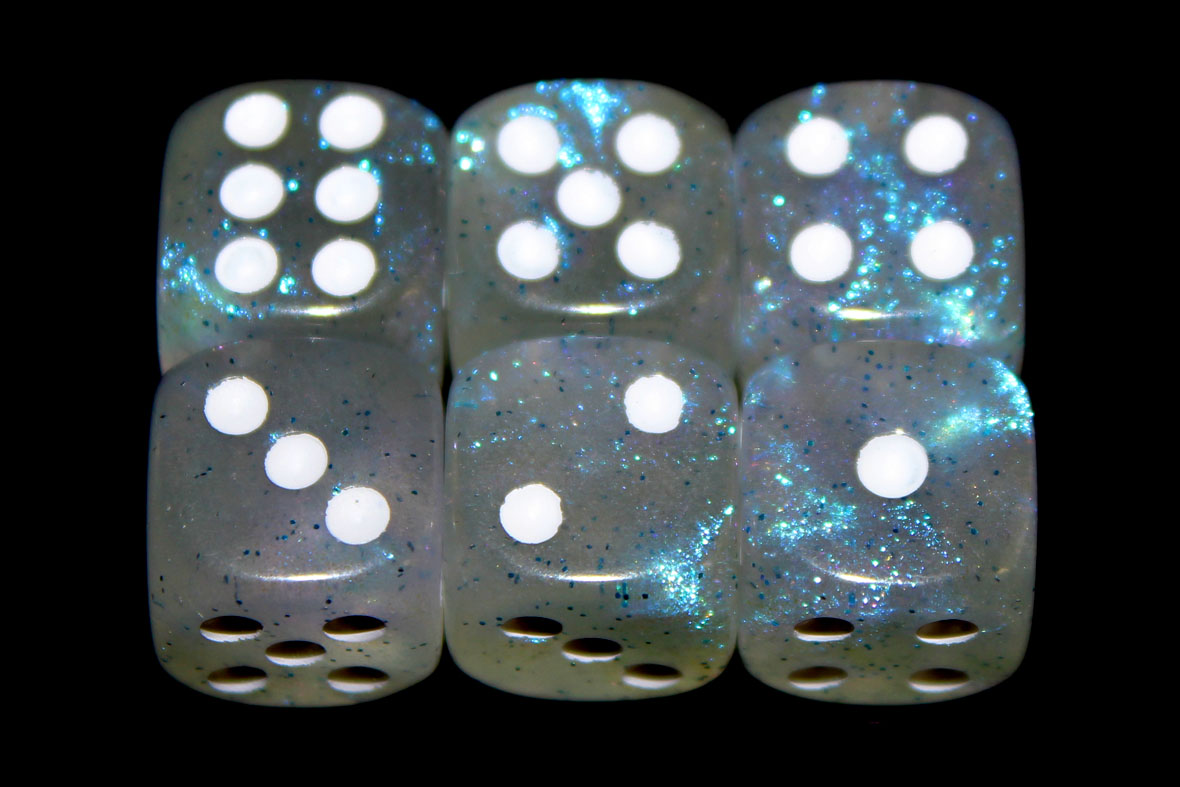 These are the easiest to do; just shuffle them into the base game’s public objectives:

Just be careful, as some of these will directly conflict with existing base game objectives. Avoid having pairs of both Symmetry and Variety of the same type; that will lead to a bad time.

Either way, once you’ve thrown in your modules, you’re ready to start!

Again, the modular nature of these doesn’t really lend itself to a cohesive narrative, so let’s break this bad boy up into segments. 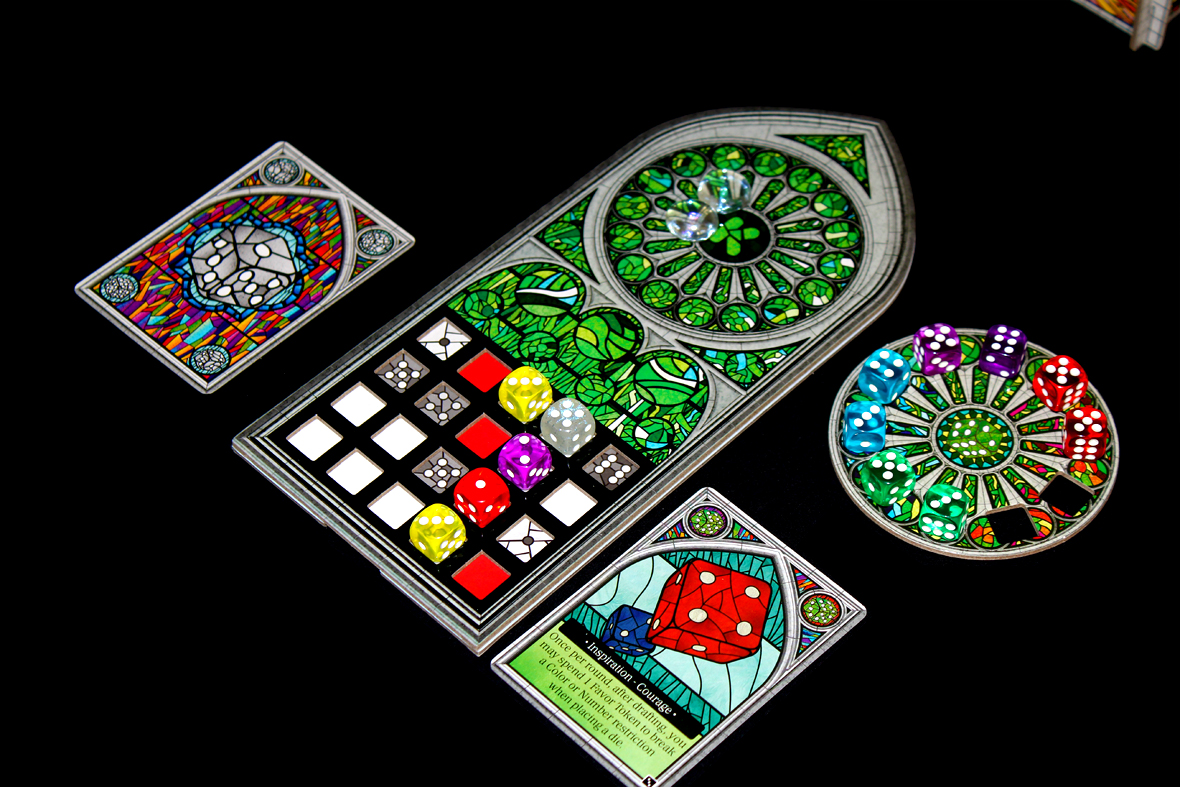 Inspiration Cards have very few gameplay effects outside of what they detail on the cards. They generally give you additional benefits, like making used Tools cheaper or allowing you to take a die from the Round Track or other bonuses. Turn the card to the side if it’s used once per round; if it has a once-per-game effect, flip it over once it’s been used. 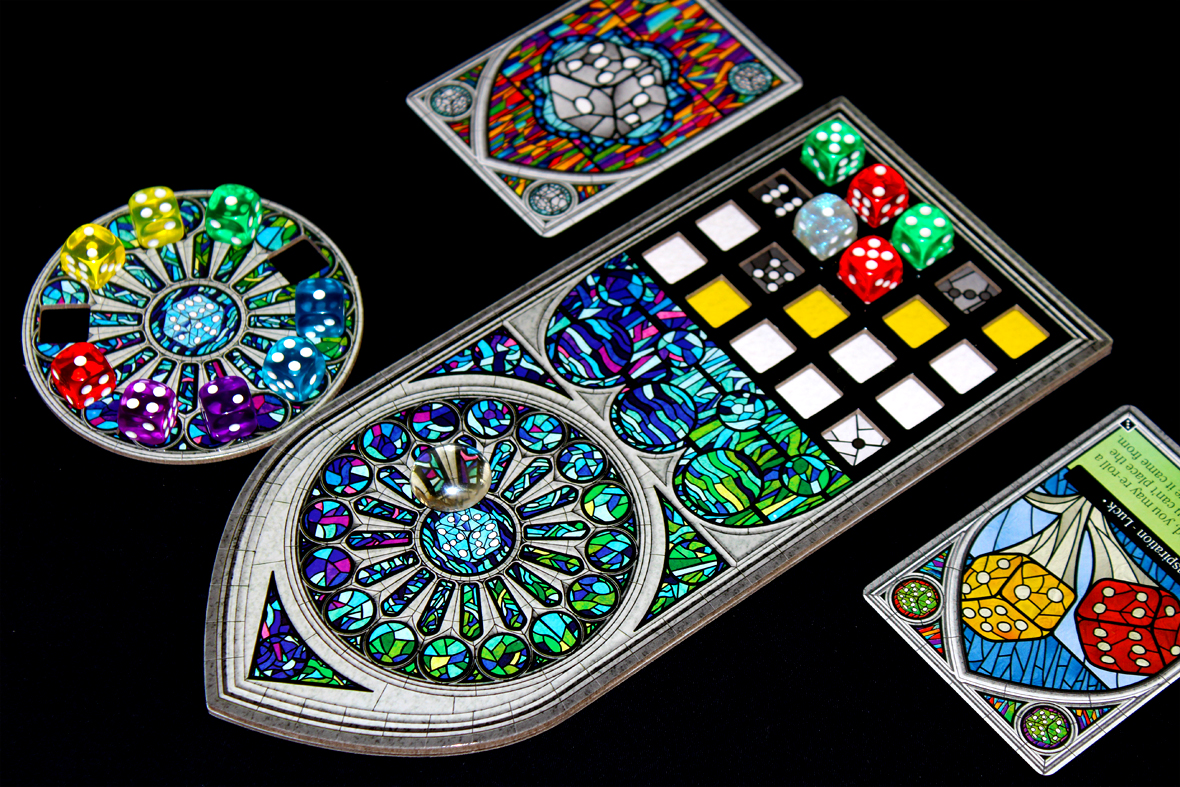 Rare Glass Dice are more complicated. They replace a Tool Card and frequently allow you to spend Favor Tokens to collect a Rare Glass Die. A Rare Glass Die can be placed on your board following normal placement rules with one important detail: it’s considered to be any color, so it doesn’t violate adjacency rules when it’s placed next to any color die. The value restrictions are still in place, however.

There are additional Private Objectives that deal with the Rare Glass Die; use them (or shuffle them in with all the others) when using this specific module. Don’t use them if you’re not using this module, of course.

The new Public Objectives are just there to melt a few brains. These require symmetry on your board, in that certain spots must be the same value or same color for an additional challenge. As I mentioned elsewhere, this directly conflicts with the Variety objectives, so, make sure you don’t have contradictory objectives in your game when you’re playing.

Nothing about these particularly impacts the end of the game beyond how the objectives are scored, so, once the game ends, the player with the most points wins! 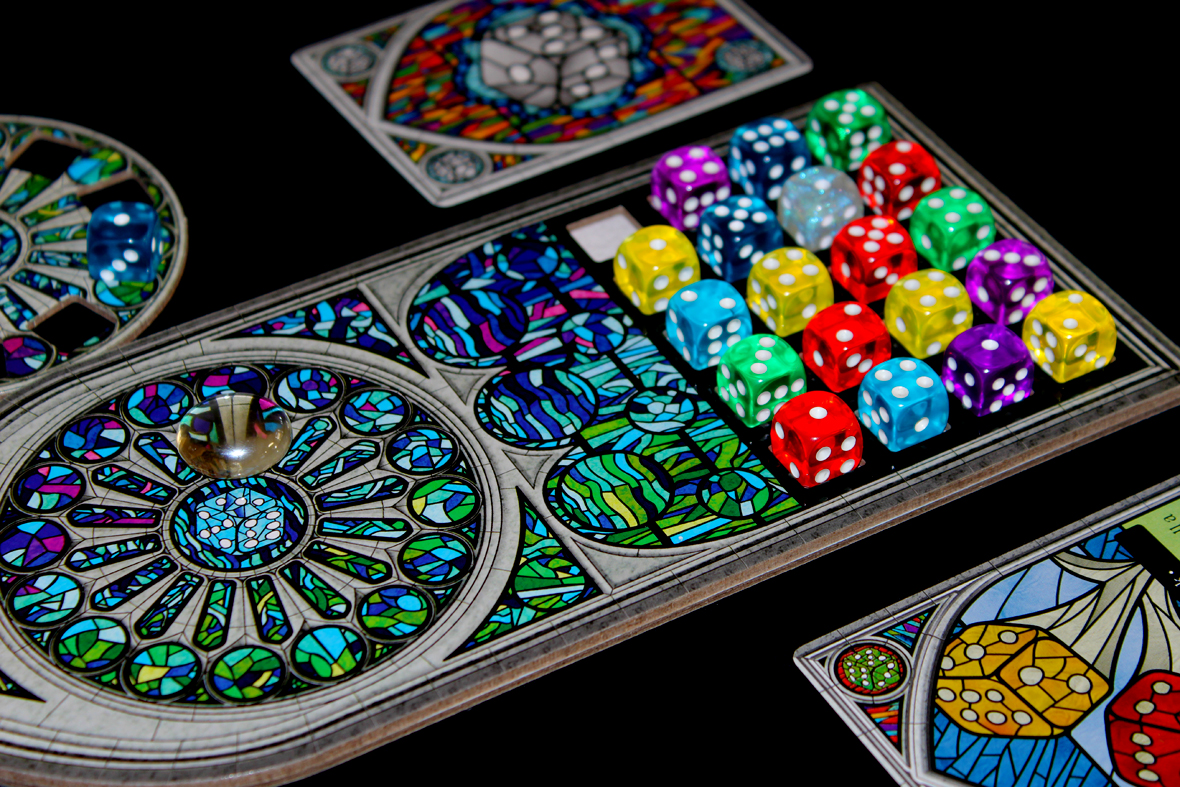 Adding in another decision point to a game is going to make the game tend to take longer with players that agonize over decisions. This isn’t a particularly groundbreaking idea. That does, however, mean that I’m less likely to break this out at 4+, since I already think that 5- and 6-player Sagrada takes too long. I’m not generally a big fan of expansions that increase the viable player count anyways; I think that causes games to bloat a bit and take too long to finish. That said, at two, this still zips along, especially with the Private Dice Pools in play from the last expansion.

Overall, I think Passion is a solid expansion for the discerning Sagrada fan. I’m glad I’ve had the chance to try it, but it’s definitely not something I’d use when I’m introducing the game. Like I said earlier in my review, it feels like the kind of thing that you’d unlock via a social goal or a stretch goal on Kickstarter. Usually with games like these, that’s exactly what you’ll see; a set of scoring cards unlocked because you got 500 thumbs on BGG or some more player powers revealed because you hit a certain amount of money. It’s interesting to see these come along later in Sagrada’s lifecycle; for a game like it, you’d expect to see something more … substantial isn’t quite the word I want to use, to be honest. I’m thinking more of games that add significant new effects in their expansions, like Heroes & Hexes. To be fair, two of my favorite expansions (Pandemic: On the Brink and Carcassonne: Inns & Cathedrals) are both fairly low-key and modular, as well, so perhaps I’m not being entirely fair to Passion. I think for a smaller box expansion it’s solid in that the small modules it adds aren’t terribly distracting on their own. Together, that’s where I start to waffle a bit. It feels like it’s starting to add too much to Sagrada, if I’m being real. Once we had the Private Dice Pools, the game started moving quickly enough that I felt like the experience should streamline itself to start matching that energy. Passion is wholly unconcerned with streamlining, and while that’s great for some folks, it doesn’t necessarily make me overwhelmingly enthusiastic to play this at more than two players. But at two, it’s great, so, that’s not the worst thing either. And so I continue to waffle a bit. If you’re looking to add that extra oomph to a game you already love, then yes, Passion should be right up your alley! If you’re enthusiastic about how the first expansion really cut away some of the game’s clunkier parts, well, I don’t think this is going to appeal to that desire for streamlining. That said, I do like what it adds, so if you feel like that’s going to be for you, I’d recommend checking it out!