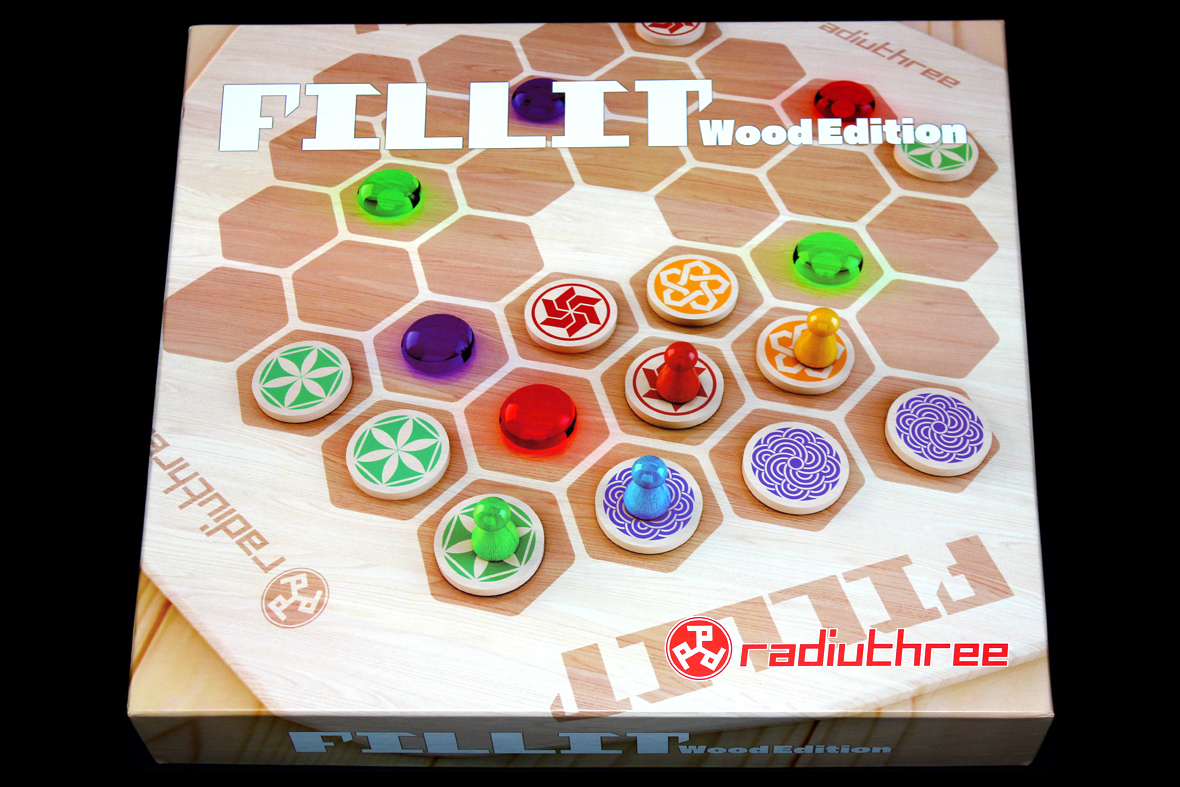 Full disclosure: A review copy of FILLIT  was provided by Big Cat Games.

Alright, this is an exciting week. Three abstract doujin games are hitting Kickstarter from Big Cat Games, and I’ve gotten to check out all three. I hustled a bit to get this review done ahead of the Kickstarter, and … here it is! It’s done. I can make that happen sometimes. Big Cat is routinely one of my favorite groups to work with, and so, I’m always stoked to check out what they’ve got coming down the pipeline. There’s always more, as well, so, that’s even more to look forward to, here. Let’s dive into FILLIT and see what’s happening.

FILLIT is an abstract strategy game of paths and lines. As you move, you fill in the spaces behind you to create a very real trace of where you’ve been, almost like Tsuro. However, unlike Tsuro, your opponents are doing the same thing and can cut through your left-behind trails, filling in the spaces with their own tokens. The first player to run out, wins. Will you be able to forge a new pathway for yourself?

Not really any; each player has a pawn, tokens, and stones:

Place them on either side of the board: 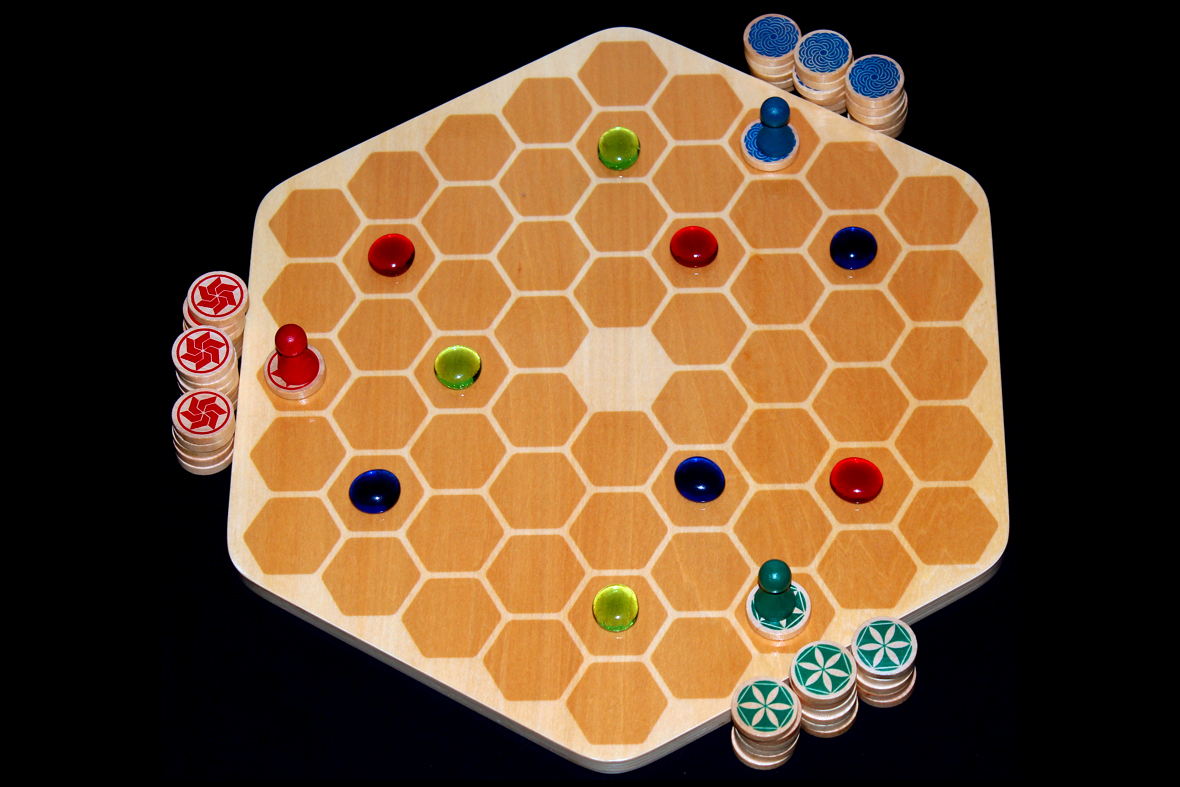 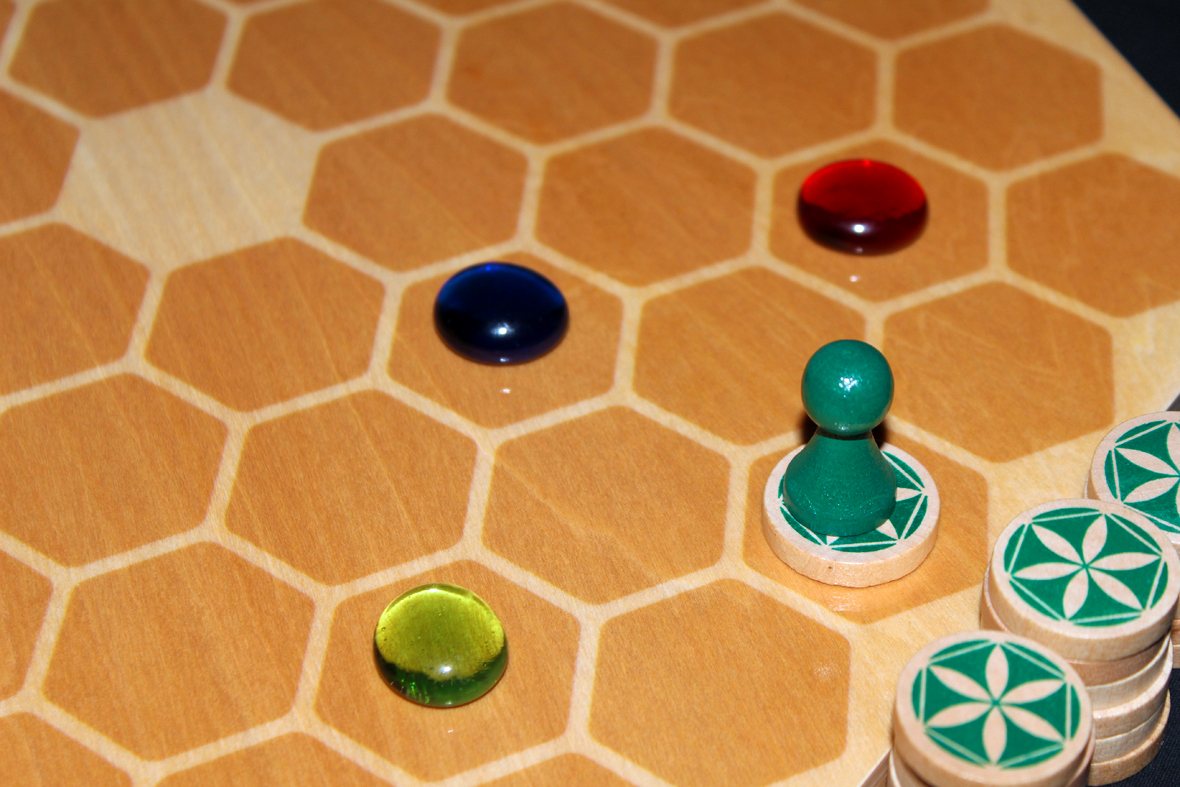 As with a good abstract, there are very few things to do on your turn. You must do both of Move your Token and Move your Stone. You can do either one first, but you must do both, if you can.

This one’s a bit more complicated, so we should definitely lead with it. That makes sense. What you do, is, you move your token as far as you can in a straight line perpendicular to one of the edges of the hex you’re currently on. You stop when you hit the edge of the board, the center of the board, another player’s pawn, or another stone.

When you’ve stopped, place tokens of yours on every space you traveled through to get there (making a straight line). If your opponent’s tokens are on any of the spaces that you traveled through, replace them with yours. Return the displaced chips to their owner. 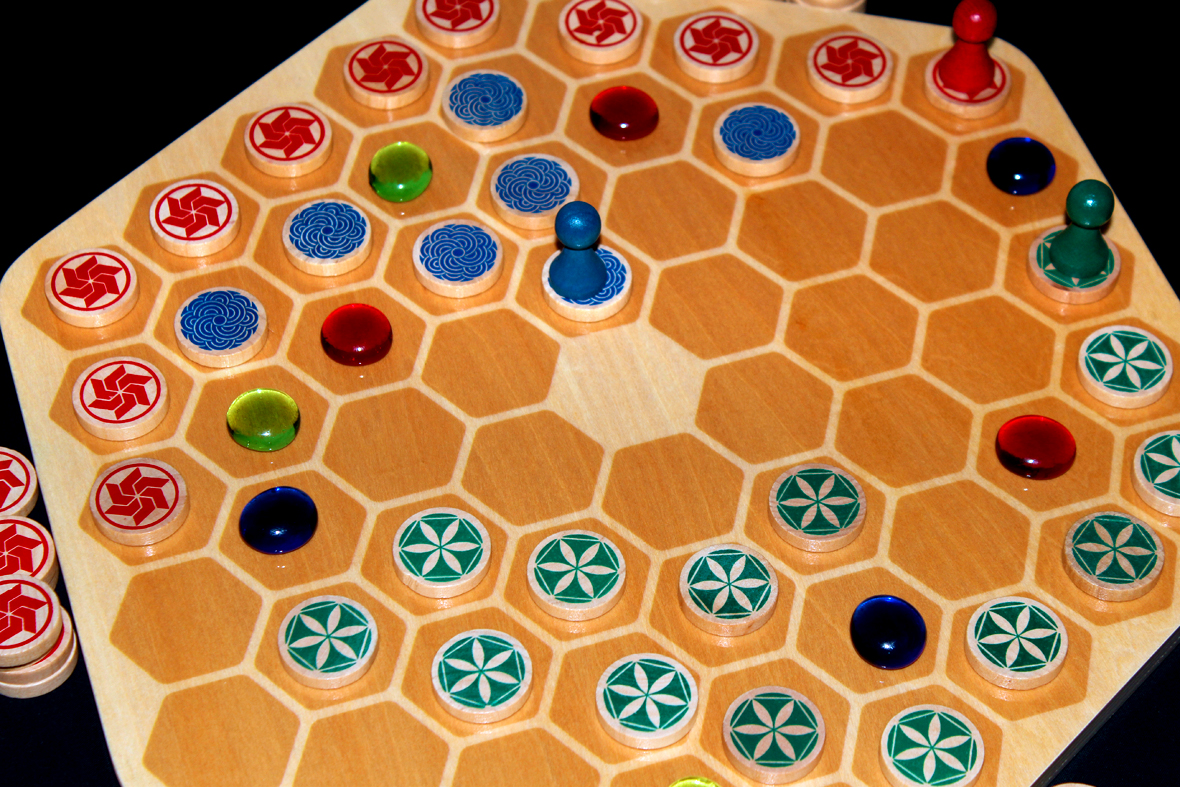 You may move a stone of yours one space in any direction. If that space is occupied, move whatever is on that space back into the space your stone just vacated. Note that you cannot move your stone to completely block off your pawn.

The game’s over as soon as any player runs out of tokens. That player immediately wins!

I tend to abhor team-based abstract games, so I generally won’t play this one at 4 players, pretty much ever. It’s not a judgment on FILLIT, specifically, as the same rule applies to Santorini, and that’s basically my favorite abstract (and one of my all-time favorite games). My problem with this at three is that the same problem emerges that a lot of 3P abstracts have, in that there’s a Kingmaker problem with this one. Eventually, you’ll likely have to choose which player to go after, with decent odds that the other player will win. That never feels … great. This is my general problem with a lot of 3P abstracts, and I don’t think FILLIT successfully overcomes this. Not really a problem with FILLIT in particular, but still worth noting. As a result, I’m mostly going to play this one at two players. I think it lowers downtime, reduces some of the analysis paralysis, and avoids the kingmaking problem I just generally see in the three-player version of a lot of abstract games.

Overall, I think FILLIT is solidly fun! It has the disadvantage of being a very focused two-player abstract strategy game, which means it’s directly competing with Santorini for my affections (and potentially 7th Night, I suppose?). Unfortunately for FILLIT, I can’t knock Santorini off its throne so easily. This definitely has some elegant aspects to it. The construction is nice, the gameplay is fluid, and the stone usage leads to some pretty interesting decisions. It’s also dead simple to pick up. You really just pick a direction and go in that direction until you hit something. The choices are significant, but the pathways through the board are constantly changing due to other players and their stones, meaning that you have to think tactically about the path you want to make. This, amusingly, contrasts quite nicely with next week’s Quiek, which is much more about thinking strategically about the path you want to trap your opponent into creating. But that’s a Next Week Eric Problem. I think if you’re a fan of abstracts that this game isn’t going to let you down, even if it’s not quite able to engage me enough to dethrone my favorite. Part of that might honestly be that there’s no theme. I think most of my favorite abstracts have something in the way of a theme, even if it’s painted on (I see you, Inner Compass). Without that, I don’t think I engage well enough with the game to really think about it in the long term. But that’s the risk you take when you’re trying to design a game, I suppose. Not everyone likes every theme, but a themeless game can still resonate with players. And I think, in some ways, FILLIT still does that for me. I haven’t fully cracked it yet, but I still want to. And if it intrigues you, it’ll be hitting Kickstarter soon, so you’ll have that chance as well!