Full disclosure: A preview copy of Skulls of Sedlec was provided by Button Shy. Some art, gameplay, or other aspects of the game may change between this preview and the fulfillment of the Kickstarter, should it fund, as this is a preview of a currently unreleased game.

Ah, one of my favorite companies to do Kickstarter previews for is coming back around. Button Shy is delightful. Easy to work with, the games are simple to play and they play quickly, and they’re always just … fun. It’s nice to see a company that really just … gets their schtick as well as Button Shy does. We talked about consistent publishers on Twitter a while back, and I’d pretty solidly stand by Button Shy being on that list. So, I mean, when they say they’ve got another game to check out, I’m excited to do that. Let’s see what’s going on with their latest, Skulls of Sedlec!

Well, it’s not a great time right now, but it’s certainly the 16th century and you’re an assistant to the Bone Collector in the Sedlec Ossuary. Weirdly, that was his name before he got into gravedigging. It’s sort of like how people with the last name Judge are more likely to get into the legal profession. You’re at least thirty percent sure that’s correct, but also, you don’t know how to read, or what the legal profession is. You might know how to read, actually. Who can say. This is getting away from me. Help The Bone Collector by creating fanciful arrangements of skulls in what you’re calling “a respectful acknowledgment of their last wishes” but what is almost certainly more aptly called “a crime”. Will you be able to respect the deceased?

Delightfully, almost none. Just shuffle up the cards:

Put them in a 2 x 3 arrangement that we’ll call the Graveyard (we call it this because the rulebook also calls it this). And you’re ready to start! 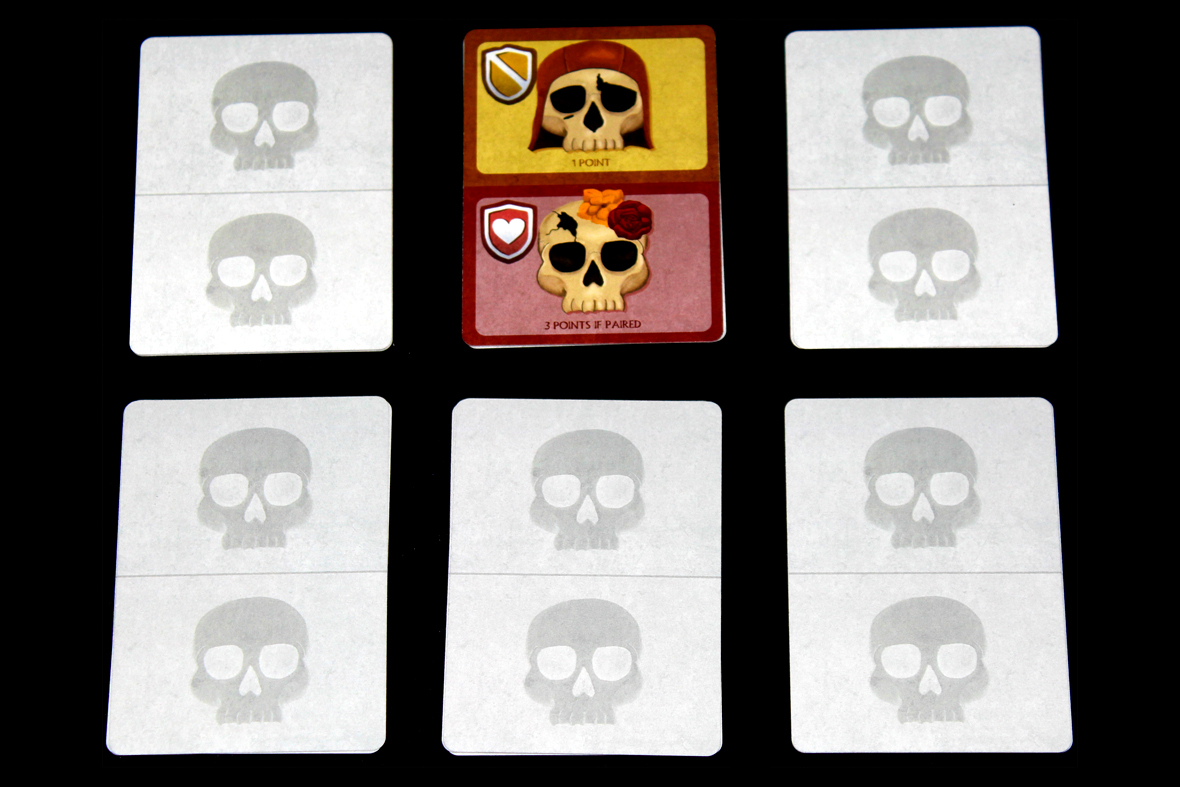 Game’s pretty simple. On your turn, you can do one of three things:

Dig: Choose up to two piles in the Graveyard (you must choose two if two are available); flip the top card of each pile face-up. From the card(s) you flipped, choose one card and add it to your hand. If there are no face-down cards or you have two cards in your hand, you cannot Dig. You have a hand limit of two cards.

Collect: Take one face-up card and add it to your hand. If there are no face-up cards or you have two cards in your hand, you cannot Collect. You, again, have a hand limit of two cards.

Stack: Place one card from your hand onto your stack, following placement rules. Essentially, you’re building a stack of cards up, and you can place any card on the next level as long as there are two adjacent cards below it, sort of like Animal Inc. If you start your turn with two cards in your hand, you must take the Stack action; you cannot do anything else.

Play continues until all players have built a stack (9 cards at two players; 6 cards at three players). Then, score! An important conceit here is the concept of levels. Each card is split horizontally in half; each half is a level. So a card has a bottom level and a top level. In that way, each row of cards is two levels tall. From there, score the various cards based on their type:

I mean, you get a ton fewer cards at three, since you’re splitting your cards with a third player. This not only lowers everyone’s score threshold, but it means you need to be a lot more careful about things. For one, if you see a card, you’re now significantly less likely to get it, as there’s another player who gets a turn before you do. I think this makes Romantics particularly dangerous, since you can split them with another player (to your detriment) if you’re not careful and counting cards. You also get fewer turns, so, you’d be best off maximizing the cards you can play. Personally, I’ve got no problems with this game at three, but I really like maximizing my stack at two, so I’d probably break this one out for two players a bit more frequently.

Overall, I quite like Skulls of Sedlec! I’m not necessarily the biggest fan of graveyard-themed games (see my review of Gloomy Graves), but this game opted for a more artsy approach to its particular undertaking (har har), and I think that worked to its benefit. It, fundamentally, is somewhat of an increasing commonality in the Button Shy line; as I mentioned earlier in the review, you’re seeing a lot more games that are light spatial reasoning games with that 18 card feel, where they also have fun scoring conditions that change the game in some way. The thing is, I think Button Shy is proving again and again that 1) there’s a market for those, and 2) that they’re responsibly not saturating the market with those types of titles. There’s a very easy world where Sprawlopolis, Circle the Wagons, Seasons of Rice, Skulls of Sedlec, and even non-Button Shy wallet titles like Squire for Hire and A Wizard’s Shelf can comfortably exist. Plus, Button Shy is pushing the envelope with a particularly keen understanding of the space, and they’re releasing great titles pretty consistently, to boot. Hierarchy? Great. Antinomy? Great. I think, ironically, this may start to hurt them a bit in the long term (in a purely cynical way). They’re just consistently releasing games that I think are quite good, so it may start to seem less special, which is unfortunate. That said, it definitely hasn’t happened yet, so, I’m still pretty excited about Skulls of Sedlec. If you’re into another solid game for two that’s got spatial puzzling, some luck, and a lot of skulls, I’d recommend taking it for a spin!