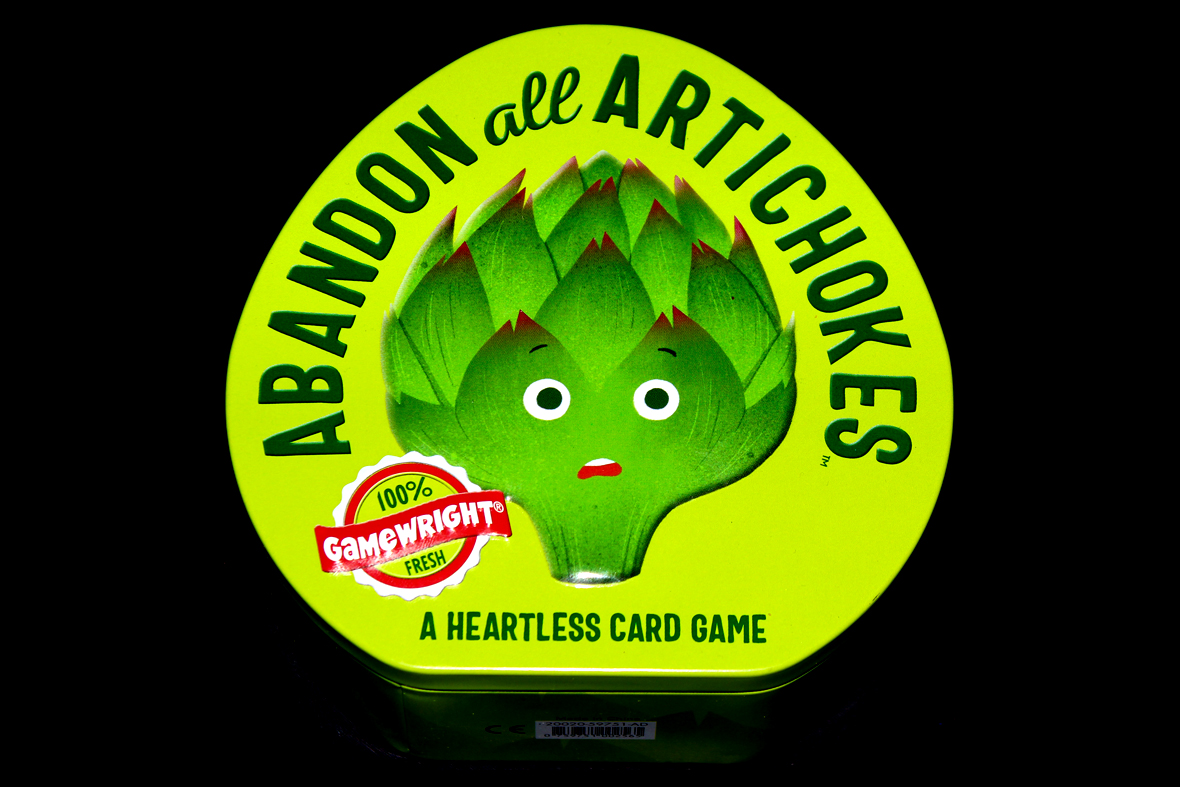 Full disclosure: A review copy of Abandon All Artichokes was provided by Emma Larkins.

Had to try to get this one out a bit quicker than anticipated, due to a mild scheduling snafu. That happens, but, always fun to write a review on a Sunday knowing you’re going to be posting it in … less than seven hours. The thrill of a sense of urgency. It’s also just a tough day to write! The protests and police violence that have been happening over the weekend have been affecting me deeply. I’ve been talking a bit about it on other platforms and gotten a variety of reactions, from empathy (Twitter) to some guy yelling at me (Instagram), so, that’s been fun. Before I get too into the review, I should just reaffirm that as a black man living in America, stuff like this weighs heavily on me. It doesn’t really come up when I write too often, but it’s sort of threaded into my experience. It’s hard to write without at least some clarity, and if y’all been reading these reviews for a while you know the first paragraph is mostly for me and what’s going on with me, so, just wanted to use the space to organize my thoughts before I got in too deep with this very cute artichoke game. If that upsets you, … I don’t care. This first paragraph is for me. Either way, let’s dive in and see what’s going on with Abandon All Artichokes, one of the latest titles from Gamewright.

Anyways, in Abandon All Artichokes, you … hate artichokes. Powerfully hate them. Potatoes are perfect. Onions? Okay. You’re cool with carrots. Beets are … bonzer? That scans. We’ll leave it in. But artichokes, you just … can’t stand them. Your goal is to compost all of them as quickly as possible so you can live a life unburdened by these delicious vegetables (Seriously; have you not eaten a good artichoke? They’re surprisingly good, especially with butter). Your opponents have the same scheme, though, and only the fastest one can turn that dream into a reality. Will you be the first to cast aside these most hated vegetables?

First, give each player 10 Artichoke Cards:

That’s their starter deck. No real need to shuffle. You may, however, shuffle the other cards to form the Garden Deck:

Reveal five. Have each player draw 5 Artichokes and you’re ready to start! 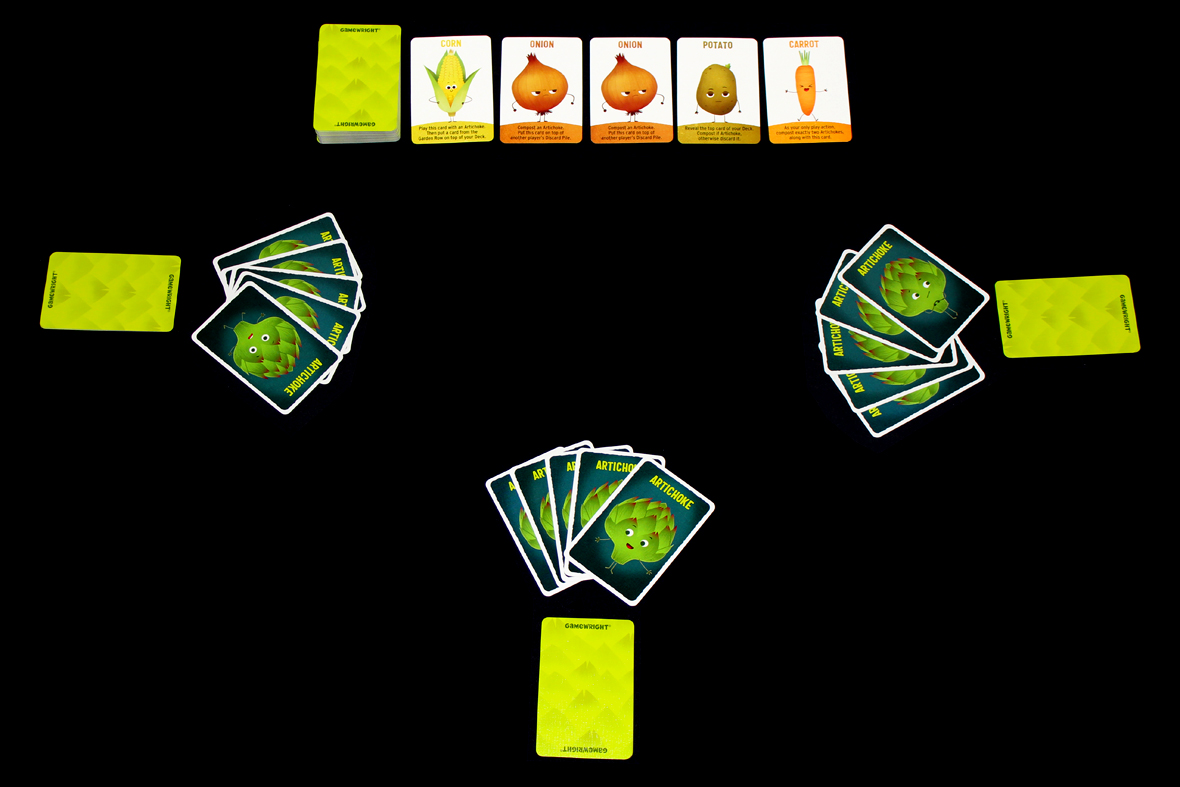 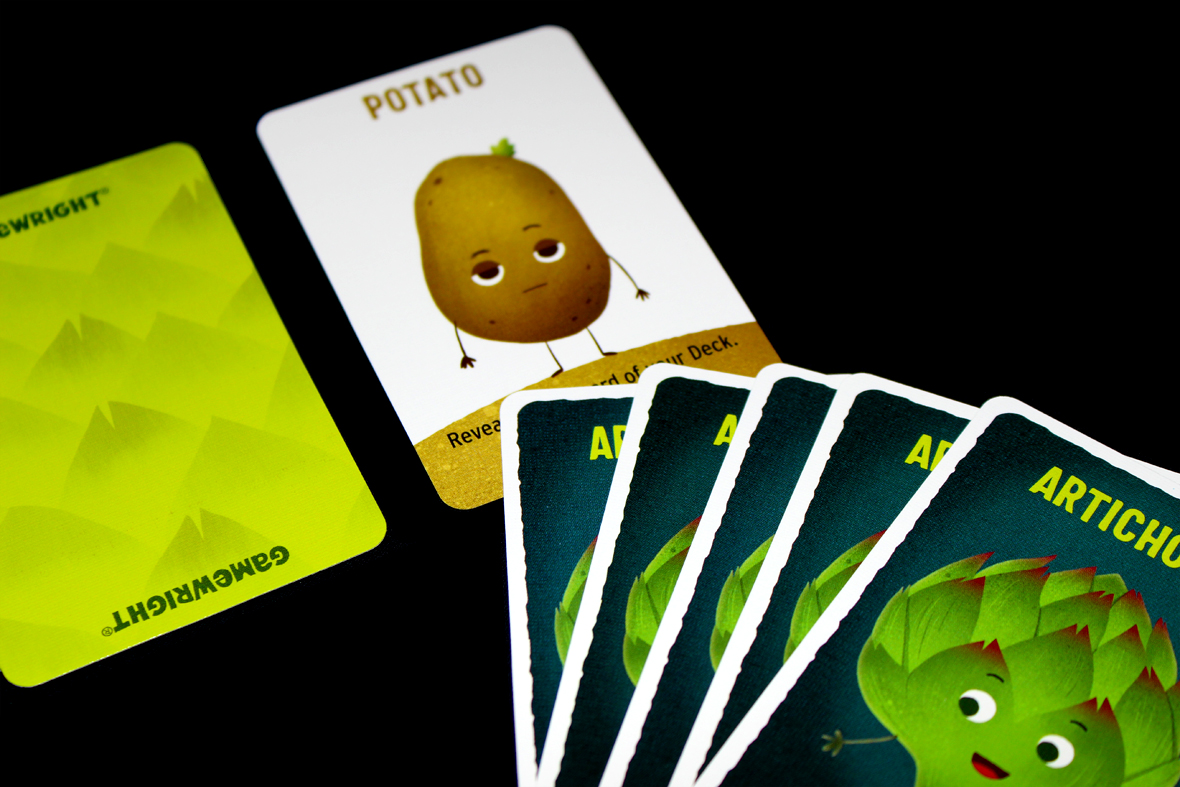 So Abandon All Artichokes is a game of dumping vegetables, specifically those leafy boys. You hate them. Why? Dark family secret, probably. We’ve all got them; no need to discuss that further. You win if you can successfully draw an artichoke-free hand and put that part of your life behind you. Your opponents seek to similarly unburden themselves, and while that’s relatable, there’s only room for one inspiring story in this game: yours. How do you kick those artichokes to the curb? Let’s find out.

A game of Abandon All Artichokes takes place over a series of turns. The turn loop is simple, so let’s just outline it real fast. 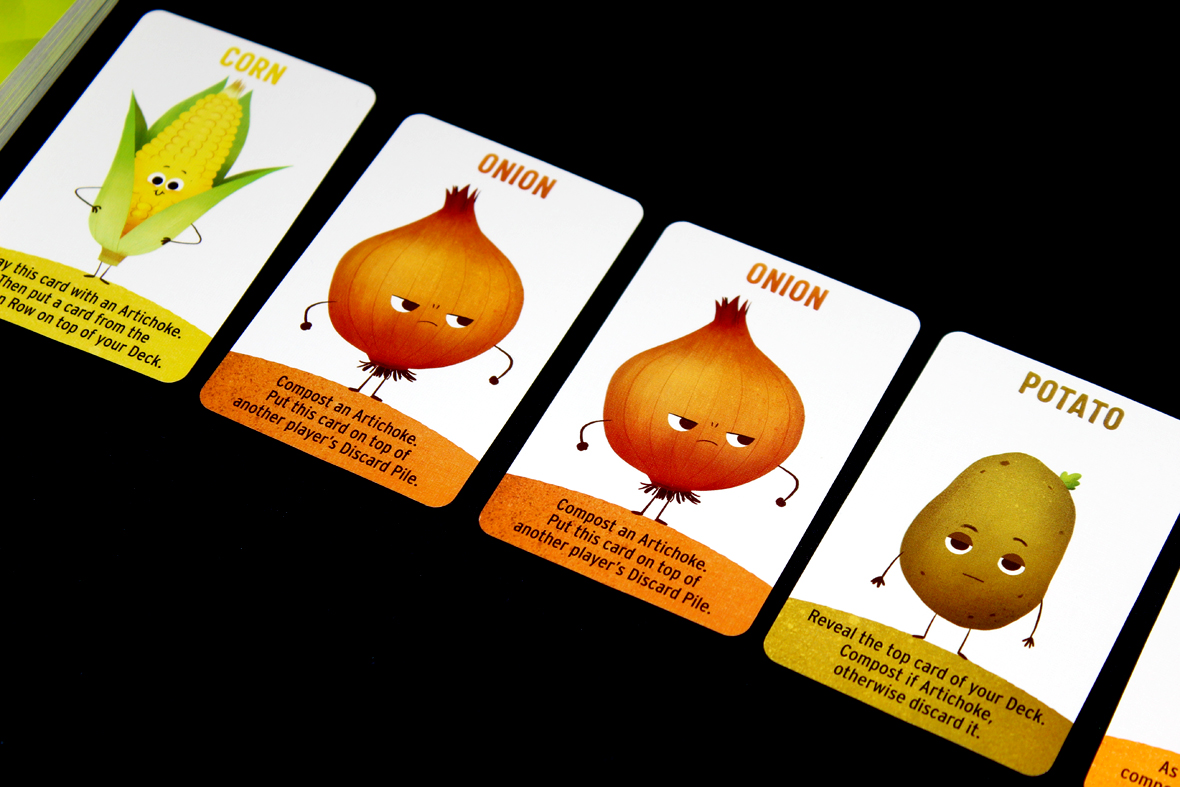 A turn starts with taking a card from the Garden Row. You may take any card you’d like, for free, but only one. Add it to your hand.

Then, play as many cards as you’d like from your hand, following the text on the card. This means you cannot play Artichokes unless otherwise stated, and if a card says you may not play any cards after it, you must abide by that. Certain cards will allow you to draw more cards, steal cards, or Compost cards, removing them from your hand and adding them to a pile in the center of the play area.

Finish your turn by discarding any unplayed cards and drawing five new ones. If there aren’t enough cards in the deck to draw five new ones, draw what you can, and then shuffle your discard pile and make that into your new deck (and finish filling your hand). It is possible that you have so few cards that you cannot draw back up to five, even after doing that. 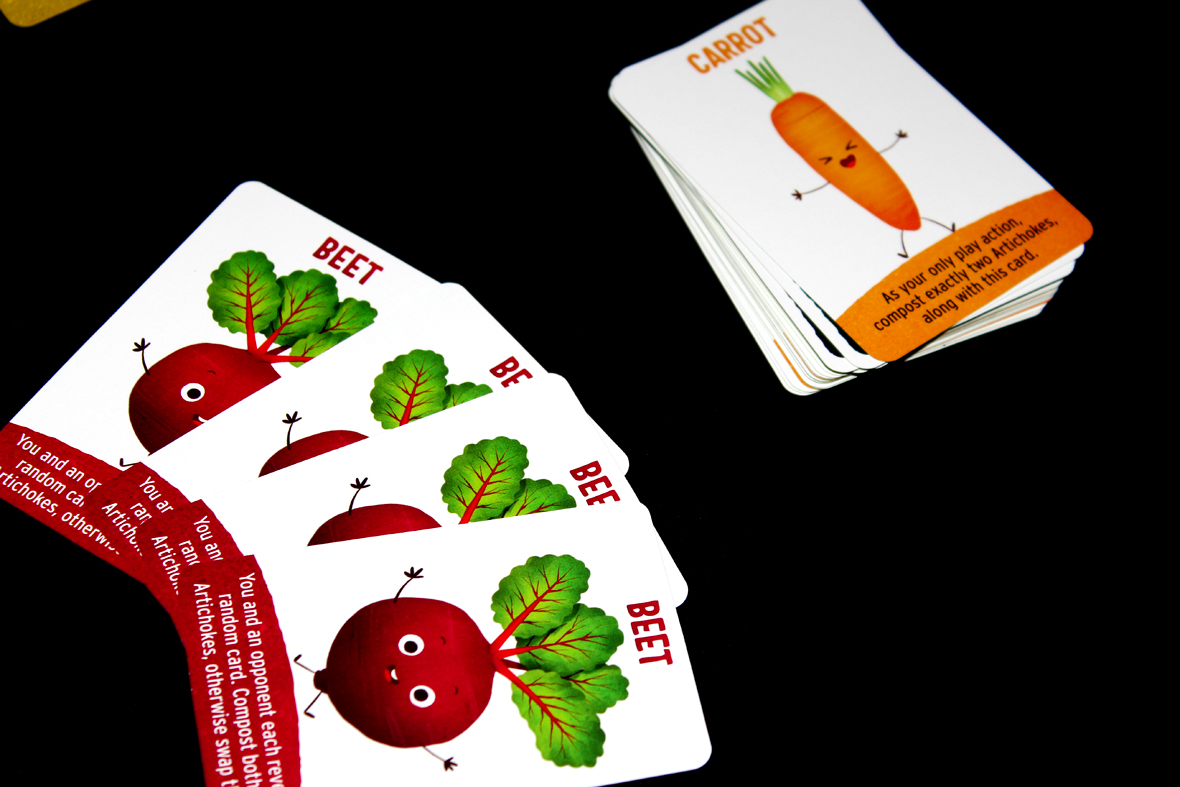 Once you’ve refilled your hand, check it: if you have zero Artichokes in hand, you win! If not, the game continues.

Not that many, but, since it’s got a random market, there’s at least one major challenge, there. Basically, since players are pulling at least one card in turn order, you can’t rely on the market to stay particularly stable between turns. Market volatility isn’t that big of a deal for this game, but it is something you’ll notice when you’re playing with more players. It just makes things a bit more of a matter of luck; you hope that the cards you need get flipped right before your turn, rather than before another player gets a chance of them. At lower player counts, well, there are fewer “other players’ turns”, so, more chances to get the things that you want. There’s also something to the idea that the take-that elements of the game change as you increase in player count, but that’s mostly just that if you are playing with higher player counts, you run the risk of players ganging up on you. Even then, they can only do so much (since most of the take-that is randomish). At lower player counts / two players, your options for targeting diminish, but so do the number of players that target you. Makes sense. Either way, though, I wouldn’t say I have any particular problems with player counts for this one; I’ve enjoyed it at every player count I’ve tried.

Overall, I think Abandon All Artichokes is a great little game! I think, for me, it sits very well in a “early gamers” sort of mood. It’s a solid starter game for folks who are getting into gaming, and it teaches the basics of deckbuilding with a bit of player interaction without getting too much into take-that or complex deckbuilding economies. After this? Dale of Merchants, Dominion, or a variety of other solid deckbuilding titles might be a good move (Spring Rally is very fun!), if you want to further explore deckbuilding. In the meantime, though, Abandon All Artichokes is a lot of fun! It’s bright and colorful, and I love that in games. It’s very inviting! It’s also very simple to learn, and doesn’t take all that long to play, meaning that it’s not too hard to get it to the table and teach it to players. I really like the idea of more games in modern gaming genres that are built to help ramp players up! Hopefully it starts teaching players about that genre well enough that they start figuring out what other things in modern gaming that they’re excited about. That’s a great line of games to make, and I’m glad Gamewright brought Emma’s game to market. If you’re looking for a solid introduction to deckbuilding, you like cute vegetables, or you want a quick card game, I’d suggest checking out Abandon All Artichokes! It’s a lot of fun.