Full disclosure: A review copy of A Death in the Red Light was provided by Mystery City Games.

Sorry in advance. This and the other escape room game I’m covering (The Curious Elevator of Mr. Hincks) aren’t … really photo-friendly games? Escape room games in general tend to elude me because, I mean, I don’t want to spoil the game for y’all; I just want to provide some light analysis and tell you where it stacks up against other games of similar genres. As a result, it’s hard to take photos without revealing puzzles or components or something that might hurt your puzzle experience down the line. That said, this one in particular is hard to photograph because, well, it doesn’t physically exist. Am I morally opposed to online-only escape rooms? No. Am I making a habit of them? Nah, I prefer tactile experiences. But, thought it might be fun, so, here we are. Let’s see what’s happening in A Death in the Red Light.

In A Death in the Red Light, you play a detective who has recently gotten back from being suspended, just in time for a body to turn up under suspicious circumstances. Luckily, even though you’re wildly unprofessional and as a result probably bad at your job, you’re somehow … also good at your job? We all contain multitudes, I suppose. You’re on the case, now, and you’ll have to go all around Amsterdam if you’re going to crack it. Will you be able to solve the mystery?

There will be a couple of things to do — one thing is to open the interactive PDF; that will contain most of the game. There’s also a police database included to help you look up some names. Don’t forget to register your team name! 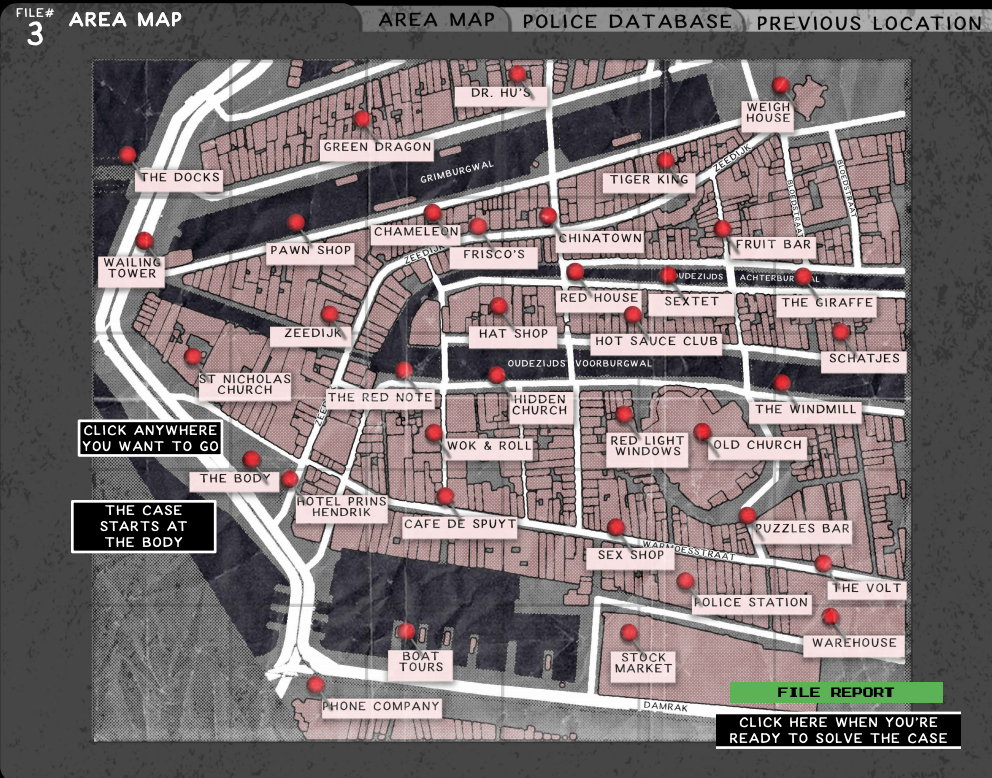 For this one, you’re on the case of a dead man in an alleyway of Amsterdam’s red light district. Not the best part of town, but you’re also not the best detective, so, it’s an even deal.

You’re aiming to solve the case by moving around town, asking suspects questions, and getting clues so that you can figure out who the victim is, who killed them, and why. Thankfully, the game mostly takes place in an interactive PDF so you can click on things to go to them and take your own notes. If you need more information, there’s an included Police Database site that will let you enter names to get more about those folks.

You play the game that way until you’ve solved the case. What’s the mystery behind this dead body?

There aren’t really major player count differences for this game; you’re all working cooperatively, so, more people is just more help on the puzzle. You can pretty effectively share the PDF around with your group, and we found that doing Google Meet (or your equivalent videoconferencing software) where one person shared the screen of the police database site solved most of our problems. I suppose to that end, you could scale pretty infinitely, but I imagine more than four people might see the game start to get away from you (as players can likely independently solve the puzzles and get ahead of the group). As with most of these, I’d rather not play at one player, but that’s just because it’s more fun, imo, to play with friends. I’m an extrovert; it’s a known problem. I suppose you could play with like, 8 – 10 people, but I worry it might be a too many cooks in the kitchen situation, at that point.

If you’re new to the “Strategy” section of my articles on escape room games, they tend to be shorter because I don’t want to spoil any of the puzzles. Just in case you haven’t seen the EXIT game reviews!

Overall, though, I thought A Death in the Red Light did well! I think I’m being a bit bullish on it because it played so well over video chat, but honestly, it’s probably been the second-best experience I’ve had with gaming over video (excluding Jackbox games because That’s Not A Fair Comparison) during this quarantine. My friends could progress on certain hint lines while I was keeping track of notes and just tell me where they ended up, we could process certain things in parallel, and we were still able to see each other and the database while we chatted. It’s a great experience! I also particularly liked that this one was based on an actual real-life incident that happened; I think that gave it a bit of grounding and made it feel very novel. I’ll freely admit I was a bit skeptical given that it was going to be a PDF, but I think they did a great job with the framework of it! I didn’t notice any particular limitations or flaws beyond the ease of brute-forcing the correct answer, but as long as you agree not to do that, I think you should be fine. My last problem was a bit more situational, but I was already struggling a bit with current events to be as enthused about our detective persona. Thankfully I was playing with two friends from my RPG group, so we quickly just wrote ourselves a new backstory. We might have been doing it while time was running; hard to remember. Anyways, if you enjoy a good puzzle and want to play a puzzley-escape-room style game with friends, I’d recommend A Death in the Red Light! I had fun.