Full disclosure: A preview copy of The Whatnot Cabinet was provided by Pencil First Games. Some art, gameplay, or other aspects of the game may change between this preview and the fulfillment of the Kickstarter, should it fund, as this is a preview of a currently unreleased game.

Back with more Kickstarter previews! I’ve been … surprisingly busy with these lately, even though every year I say I’m going to ramp back a bit. I guess I just like … the novelty? Or being busy? Or both. Likely both, I guess. Either way, it’s hard to turn down a game that looks as good as this one, so, my hands were kind of tied, I said, unconvincingly. Alas.

In The Whatnot Cabinet, you play as folks looking to collect all sorts of doodads and tchotchkes, and you want the prettiest ones. As you’d expect. Naturally, your opponents have similar designs on filling up their cabinets, so you’re going to have to think quickly and plan ahead if you want to secure yours. Will you be able to claim the sets of items that you like the most?

Setup isn’t too much. Start off by placing the Journey Board in the center of the play area:

Next, you’re mostly going to throw all the tiles into the bag:

The thing you gotta make sure you do is that you need to remove all the tiles with a flower on the back for the solo / 2P games. Next, give each player a Cabinet: 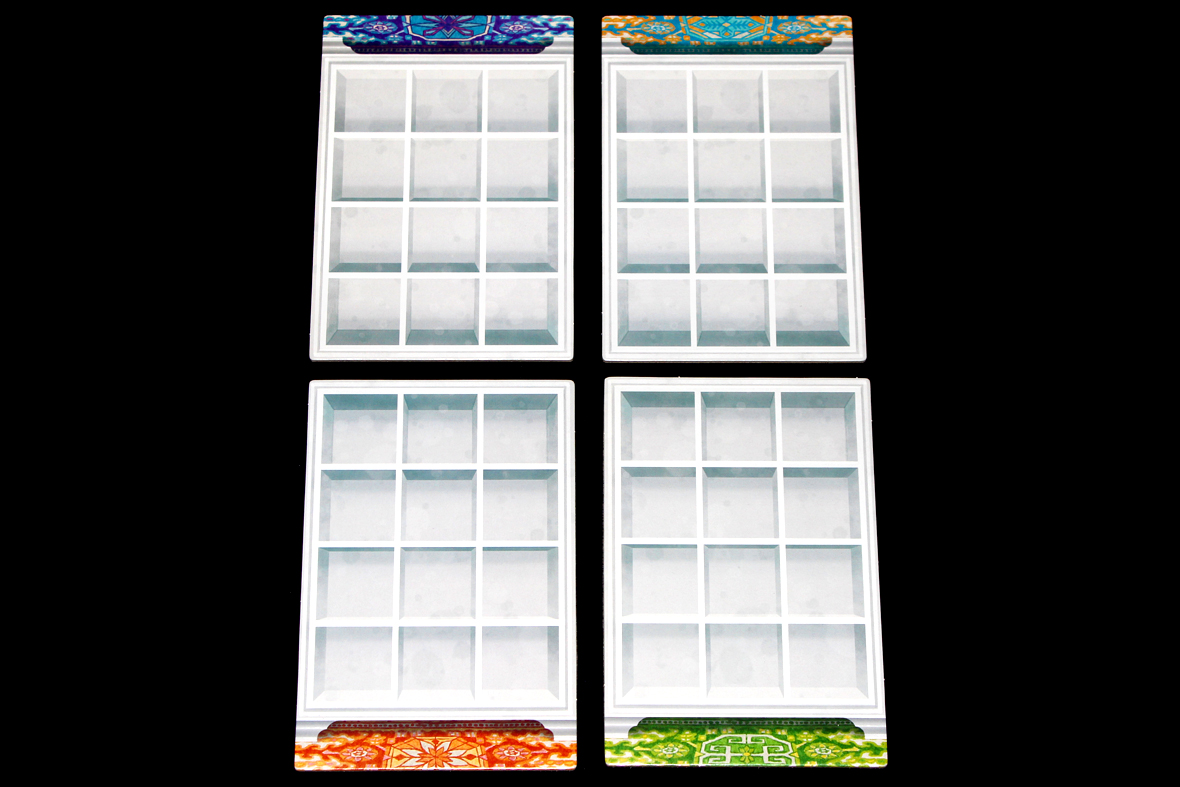 You should also give them one matching Pawn on that color (two in a solo / 2P game):

Next, shuffle the Curiosity Cards: 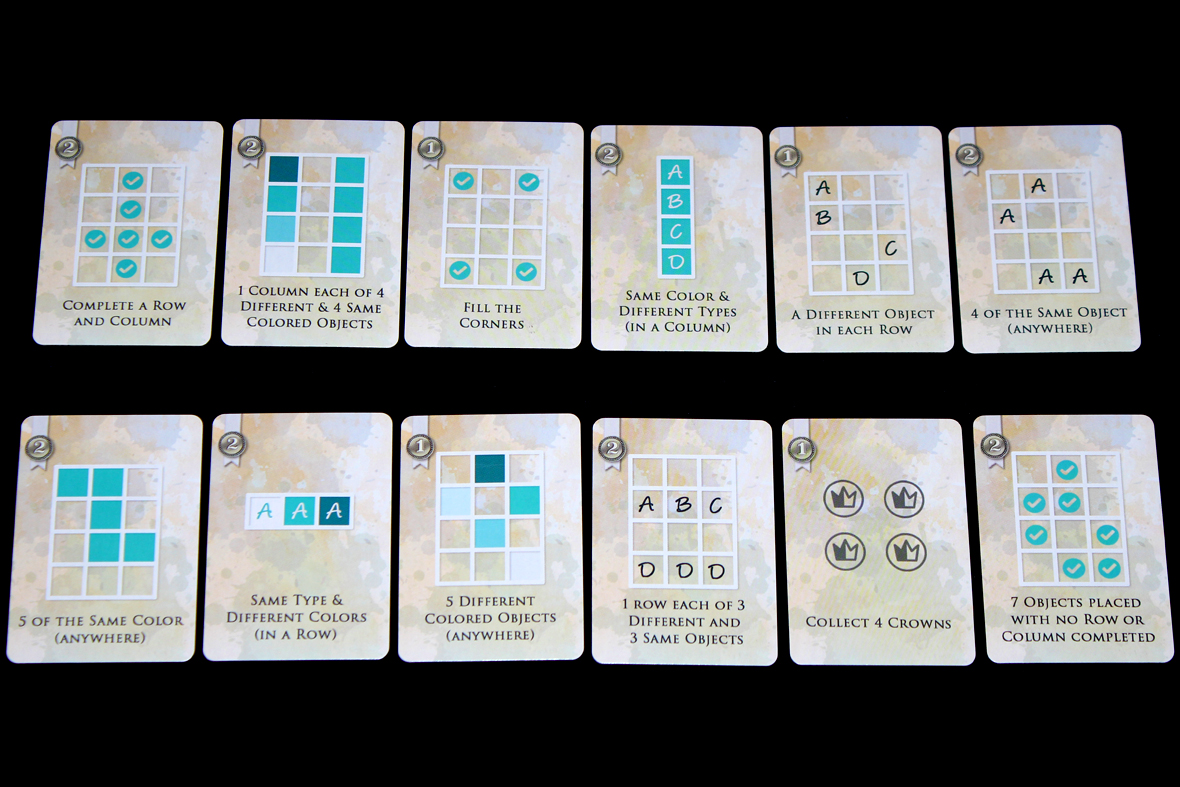 Make a supply of the Point Tokens:

Either way, once you’ve done that you’re ready to start! 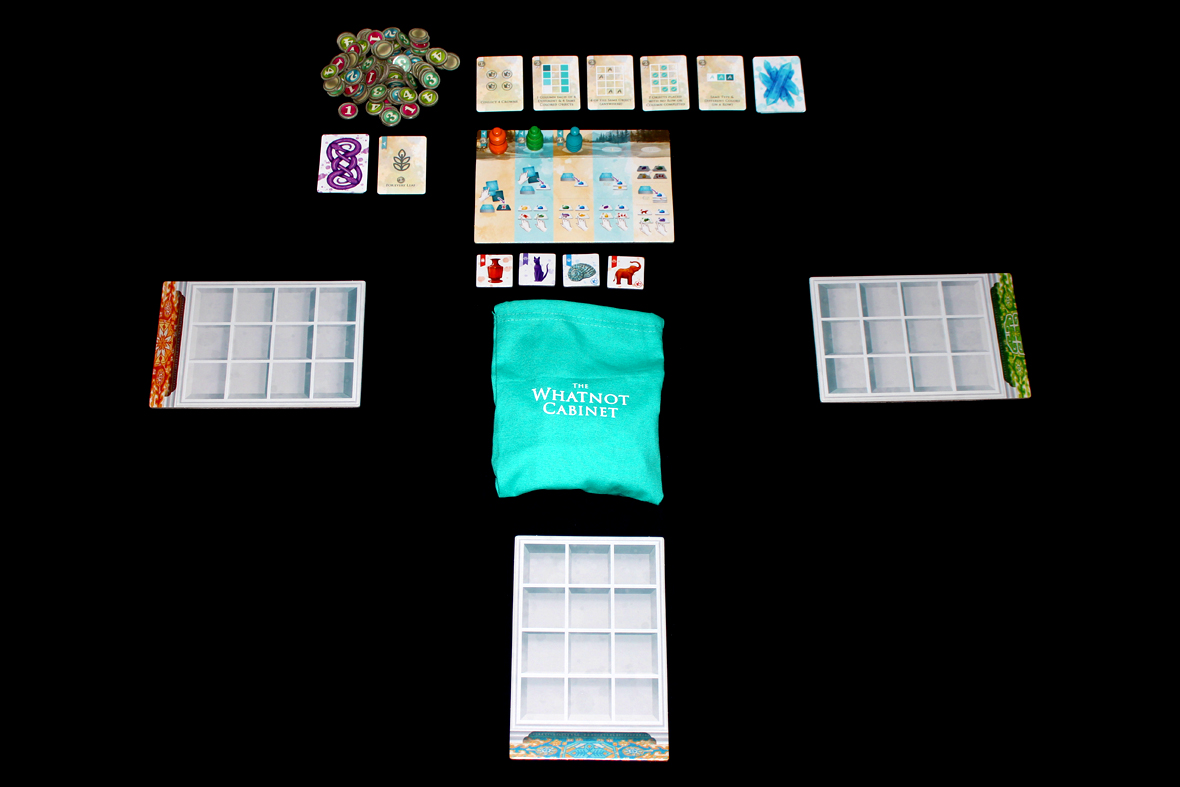 For the solo game, you’re just gonna do the same thing as I mentioned, but also start The Outdoors by revealing four tiles face-up and add in the Rival Cards. Shuffle them up, keep them face-down:

Take two of the unused pawns of the same color, and place them on 1 / 3. 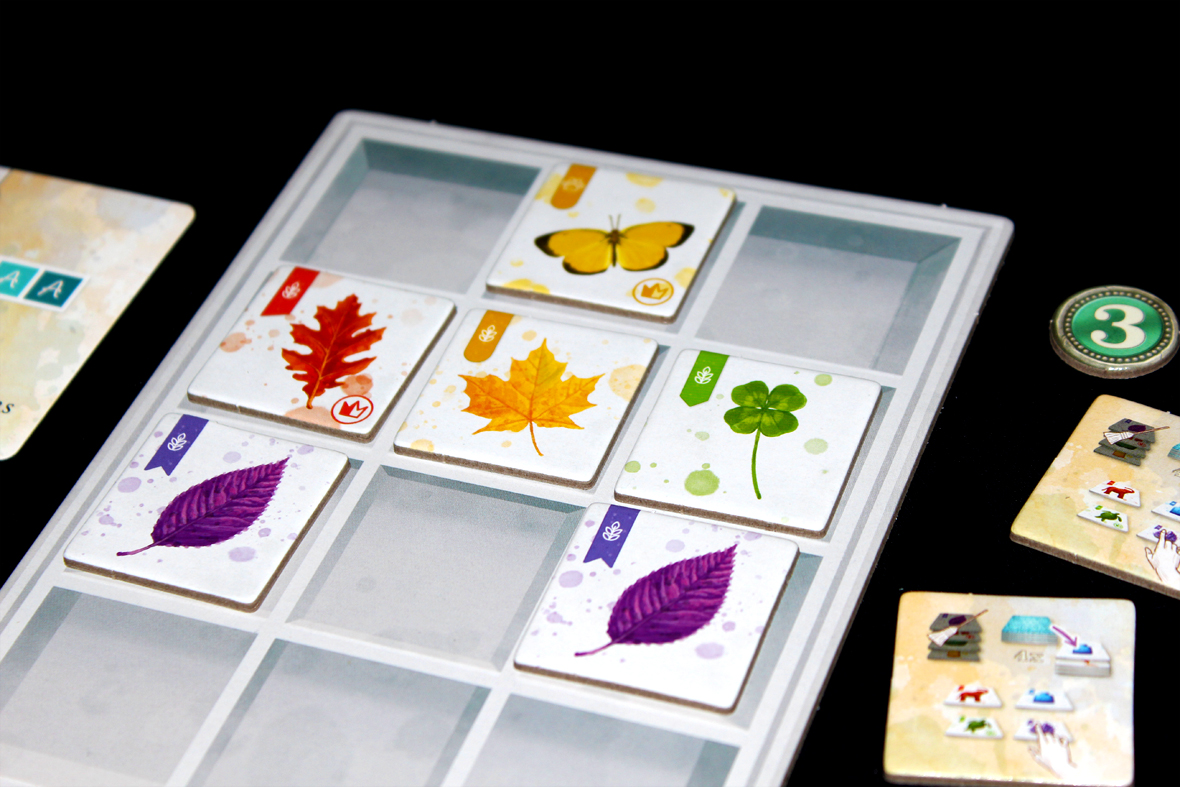 A game of The Whatnot Cabinet is played over 3 or 6 rounds, depending on your player count (3 at 1 / 2 players; 6 otherwise). Each round follows three major phases, and you’ll do that until the game ends. Let’s go through that.

When you Prepare at the start of a round, refill the Outdoors (the area below the Journey Board) to four tiles. In the first round of the game, if you draw any special tiles, return them to the bag and draw new ones until you have four not-special tiles in the Outdoors.

Now you take turns in order of pawns from left to right. On a turn, you do the following things:

Now when you take tiles, you may take special tiles or normal tiles. Either way, they must be immediately used (special tiles) or placed (normal tiles). You may use a special tile to get another special tile and so on, but once you place a normal tile in the Cabinet, it cannot be moved. As you’d expect.

The key thing is that once you’ve completed a row or a column, you score Point Tokens! They score as follows:

You may also fulfill the criteria on a Curiosity Card. If you do, claim it from above the Journey Board. Once claimed, nobody else may take that card.

After all players have taken their turn, move the Pawns up from their column back into the Landscape Row.

Beyond that, total your scores! 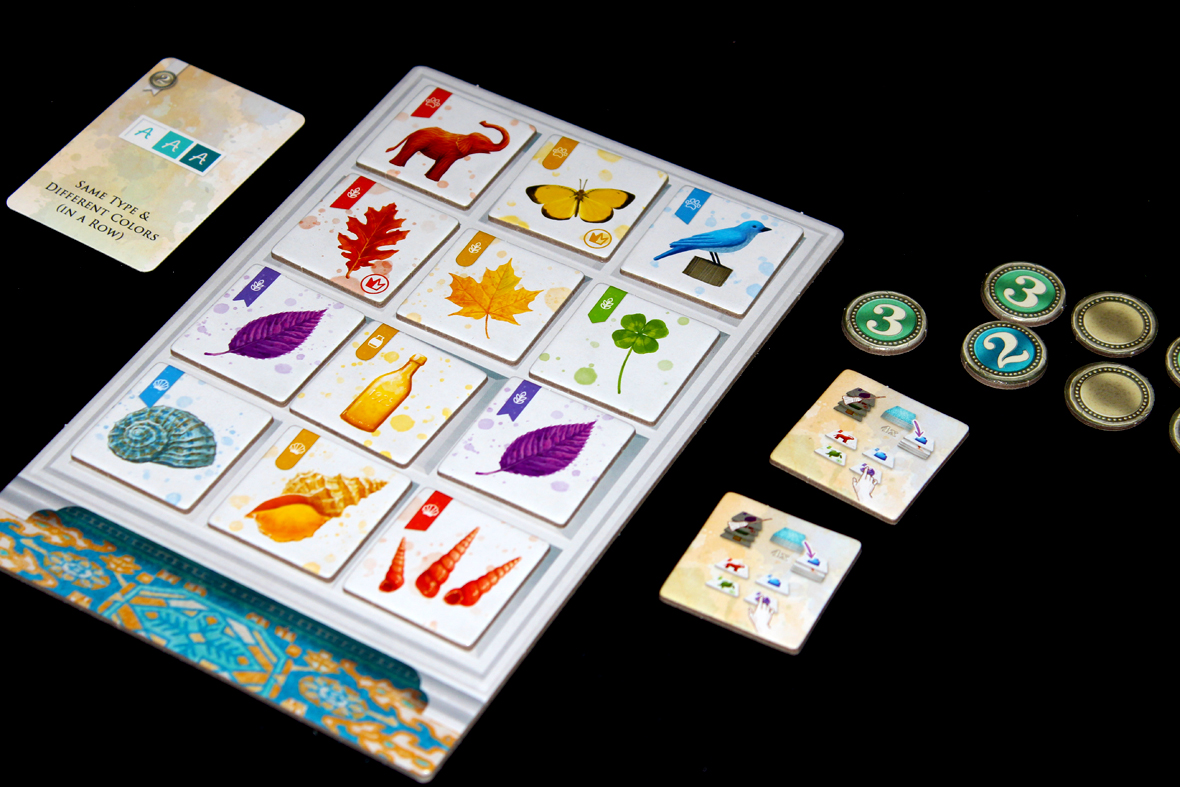 You do claim Curiosity Cards and Row / Column Point Tokens as normal, but at the end of each round, flip two of the remaining face-up Curiosity Cards face-down. They can no longer be claimed. Naturally, if there are fewer than two left, flip all remaining cards down.

After Round 3, the game ends. Score as you would normally!

The game does a pretty good job managing its own state such that I don’t really think I can point to any major differences at various player counts. The thing I usually look for is “how do your options change as more players get to take their turn before yours”, and, well, there will still be tiles taken, but generally there’s always 2 – 3 people moving before you get to move, regardless of player count. Even solo, they have you remove specific tiles so that you’re simulating the act of other players taking tiles that you were considering taking for yourself. That’s nice, in a sense, because it means that your gameplay experience is fairly constant. Similarly, the competition for Wonder Cards / Curiosity Cards is fairly similar (except at two, where you aren’t really stealing from yourself). As a result, yeah, I wouldn’t say that I have a strong player count preference; I’ve had fun at every count I’ve tried! 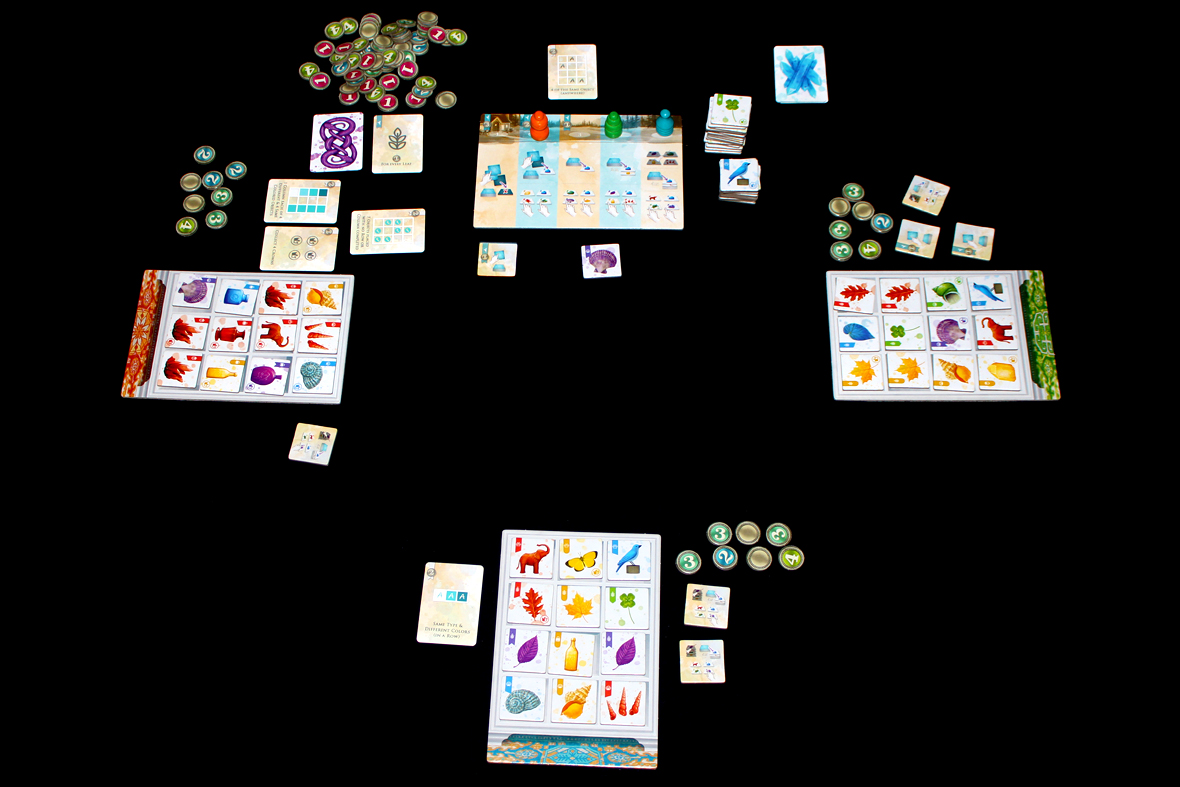 Overall, though, I think The Whatnot Cabinet is a lot of fun! I particularly like the art, but, that’s something I’ve come to expect from the Pencil First + Beth Sobel combo. It’s a very good combination and I’ve enjoyed it pretty much every time I’ve had the opportunity to play one of the games. Naturally, I think to Herbaceous first, but this is a fun successor in a different way. For me, I think the action selection and the balance of chance, choice, and turn priority is really the core driver for this game, and I think that’s a really cool feature of it that adds some nice tension. Do I want to have the most choice in my tiles? Or will taking that option only push me backwards in turn priority and leave me with worse options on later turns? Add in the problem that everyone can see what you’re taking and what you will potentially want / need and you’ve got to manage a fair bit if you’re going to pull out a win in The Whatnot Cabinet. I will say that the luck aspects of the game and trying to draw the exact tile you need to win the game can be unsatisfying, but, that’s kind of to be expected when you have a game with random draws; some will be useful, and some will not. I slightly wish the Wonder Cards were assigned secretly per-player, rather than given as a public objective, only because it increases contention for scarce resources in a game that already has that, courtesy of the Curiosity Cards. But that’s not the worst thing. I will say, I’ve mostly been playing this solo and have quite enjoyed it. I think Herbaceous wins that solo face-off because it’s so easy to set up and play, but this is a fun game in its own right. If you’re looking for something competitive and puzzley but still relaxing and thoughtful, consider checking out The Whatnot Cabinet! I’ve enjoyed getting to play it.