Full disclosure: A review copy of 5er Finden was provided by HABA.

I guess this would have been Gen Con time, ish. That’s disappointing, but, not much you can do with a global pandemic. I actually do like Gen Con a fair bit; it appeals to my distinct love for high-energy situations. Don’t love everyone’s hygiene choices, but that’s partially because I got some dude’s sweat all over my arm once and I’m still Relatively Haunted By That. It’s fun to be able to see all my friends and their cool booths and products and occasionally run into folks, even if I barely sleep and live, to paraphrase John Mulaney, like a Ninja Turtle for a week. Either way, I think 5er Finden was supposed to be one of HABA’s Gen Con releases, so let’s push those feelings about not being able to leave our house down deep and read about a new game, instead! That’s healthy.

5er Finden, like many games I review on this site, doesn’t have much in the way of lore or narrative for players to hook into, so that always makes this part of the review kind of challenging. Instead, let me briefly describe the gameplay. Players will be tasked with quickly finding up to five “Fives”, and outlining them for points. The more complex the shape, generally, the more points you’ll earn. Just make sure you don’t make any mistakes! For the more puzzley fans, there’s also a bonus Puzzle Mode! Will you be able to find five fastest?

Very little. You’ll want to give each player a board: 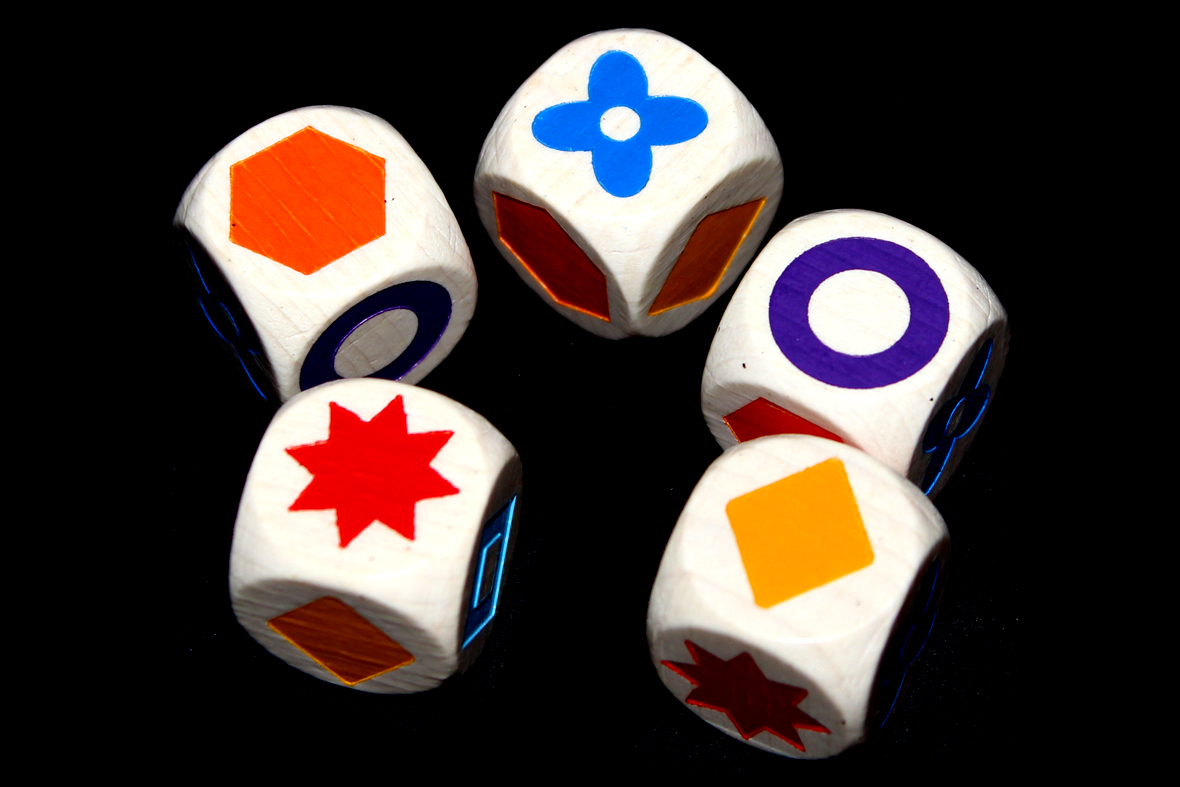 Finally, set out the scoreboard:

Set the tiles nearby:

Set out the timer and you should be ready to start! 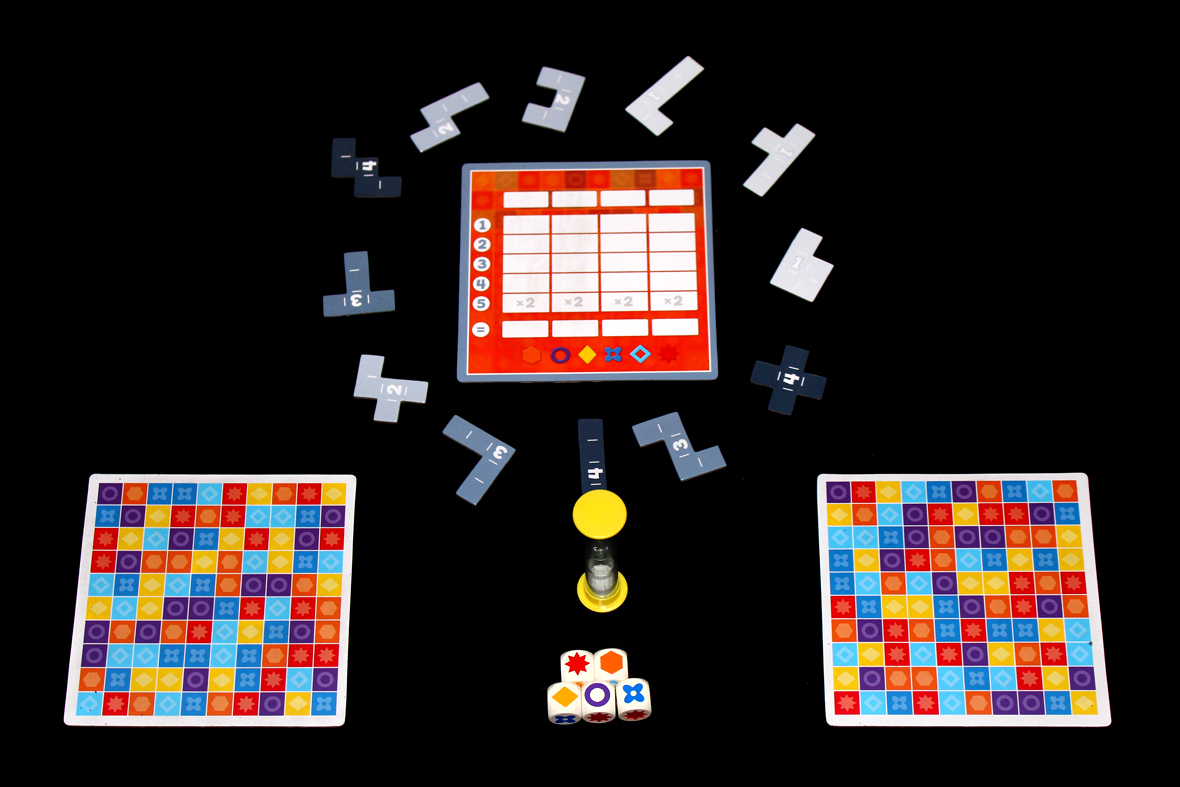 If you want to play Puzzle Mode, use the other side instead: 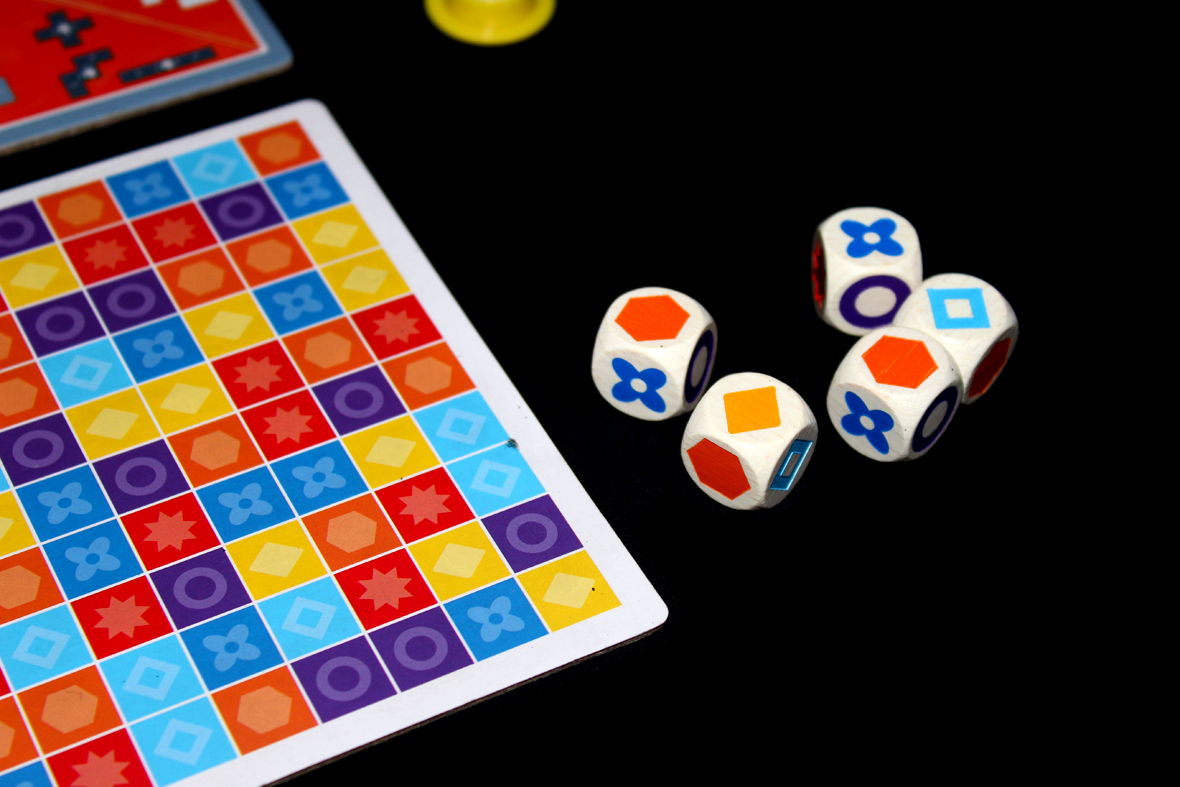 5er Finden has two distinct gameplay modes, which does make it a bit annoying to review, but out of a distinct love for you, the readers, and also for the concept of Due Diligence, I’ve outlined both below.

One common term I’ll be using is a Five, which refers to a group of five orthogonally-connected squares with symbols matching the five visible faces of the five dice you roll. The game is really into fives, conceptually, so just work with me on this one. Let’s see how it plays!

The standard game is pretty straightforward; it’s fives almost all the way down. In a given round, you’ll start by rolling the five dice. If you see three of the same face visible, reroll until you don’t.

Once you’ve finalized the roll, you start immediately! Your goal is to outline up to five different Fives on the board, with a few rules:

If you’ve got five or you feel like you’ve done all you can, flip the timer.  You can no longer edit your board, but the other player(s) have until time runs out to finish. Then check! Each correct Five is worth the number of points on its tile.

If you outlined too many Fives, you must get down to five by eliminating your highest-value Fives first. Cruel, but fair. If you drew invalid ones, just erase them. Total your score, add one point if you were the player to flip the timer, and then clear your board for another round!

Repeat this for five rounds. Keep in mind that your tile score is doubled in the fifth round (you still only get one point for flipping the timer). The player with the most total points after the fifth round wins!

Puzzle Mode is a bit more complicated. This one takes place over 12 rounds, rather than 5. In each round, you roll the dice until you get a valid set of five (again, three of a kind get rerolled). This time, instead of searching for up to five valid Fives, you only need to find one; then you can flip the timer. When you do, color in one of the circles on your quadrant of the center board.

After the round, check: if your Five is invalid, erase it and then choose a Five from your quadrant of the center board and outline it on your board, then cross it out. Why? Because after every round, you no longer erase your board. It’s like a little legacy puzzle game! Each round, you have to try to find a new Five you haven’t outlined before. At the end of the game, score each of the Fives you outlined successfully over the course of the game, and the player with the most points wins!

Hardly any, to be honest. The only player interaction is when someone chooses to flip the timer, and that largely doesn’t change much with player count, since only one player can do it. At higher player counts, I suppose it’s more likely to be spread around a bit more, since multiple players have some probability of grabbing that timer before anyone else. But it likely depends on your gaming group. Beyond that, though, I wouldn’t say player count matters too much, so I enjoy this game at any player count!

Overall, I think 5er Finden is a blast! I mean, pretty specifically, it’s my kind of game. I love speedy pattern-recognition games, and adding the roll and write elements to it really adds another fun dimension to it for me. It’s similar to Karuba: The Card Game: it’s fun, quick, and plays with an element I really like in larger games. For KTCG, it’s path-building; for 5er, it’s pattern recognition. I really enjoy it! It’s fairly well made, as well. Dry-erase boards with both same and different sides, and decent-quality markers to boot. It’s a good overall package. I will freely admit that this game (honestly, this style of game) isn’t my top recommendation to introduce to new players; it’s very easy for a player who’s skilled or experienced with this sort of thing to thoroughly trounce new players, which isn’t any fun. I have a few games like this; generally, in simpler times I would teach the game to folks and then leave them to play a few games of it before I’d hop in. I think that works well for this type of game, even if it’s a bit logistically impossible to host game night in my current locale. Either way, if you’re looking for something quick, speedy, and fun, or you want to still go fast but don’t mind some challenging puzzle elements, I’ve had a lot of fun with 5er Finden!