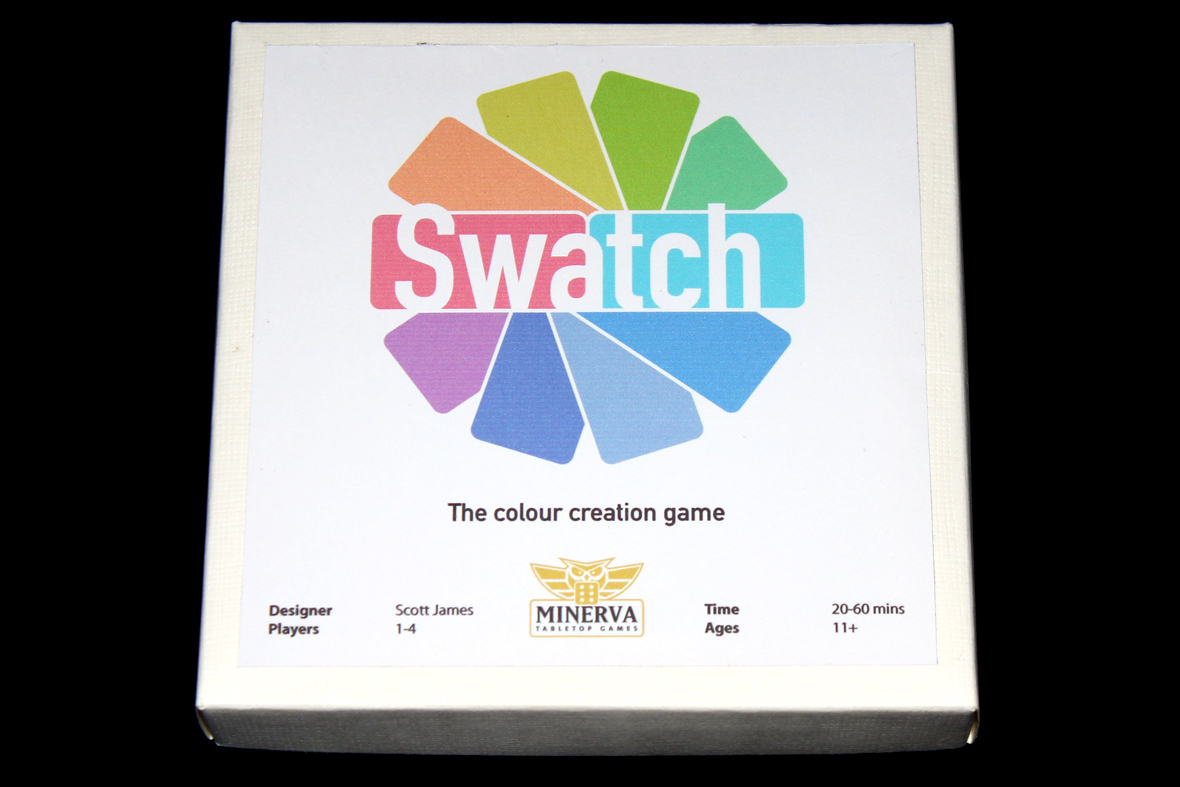 Full disclosure: A preview copy of Swatch was provided by Minerva Tabletop Games. Some art, gameplay, or other aspects of the game may change between this preview and the fulfillment of the Kickstarter, should it fund, as this is a preview of a currently unreleased game. Also, while I don’t charge for Kickstarter previews, the publisher was charged a rush fee due to the tight timeline they needed the review completed in.

Awesome, we’re back with more Kickstarters. I had originally thought Cascadia was going to be my next one, but that’s like, September, so, nope. Next one is probably going to be the various titles from Dr. Finn’s, which I’m pretty stoked to get to. Right now, we have Swatch, new from Minerva Tabletop Games. I’m always excited to see new publishers emerge; even if the games aren’t my particular cup of tea (which happens!), it increases the variety of folks who are getting in and trying their hand at game design, which I think is a net positive for the industry. First game up from them is Swatch, as I’ve mentioned, so let’s dive right into it.

So, you’re sharing a studio with other artists working for a demanding company that wants only the finest colors. If you’re me, a reviewer, you’re sort of like “… a shared … office … space?” but I think I’ve also been in my house for almost 5 months at this point, so, cut me a bit of slack. It’s been a weird time. Either way, you need to collect colors and get a bit experimental if you want to deliver on your deadlines and make a way for yourself in the industry. Will you be able to use your eye for color and come up with some truly dazzling new shades? Or will your best efforts just end up largely unpaletteable?

Not a ton. Set out the Swatch Cards, shuffling them to make six piles of four cards (all with the same number): 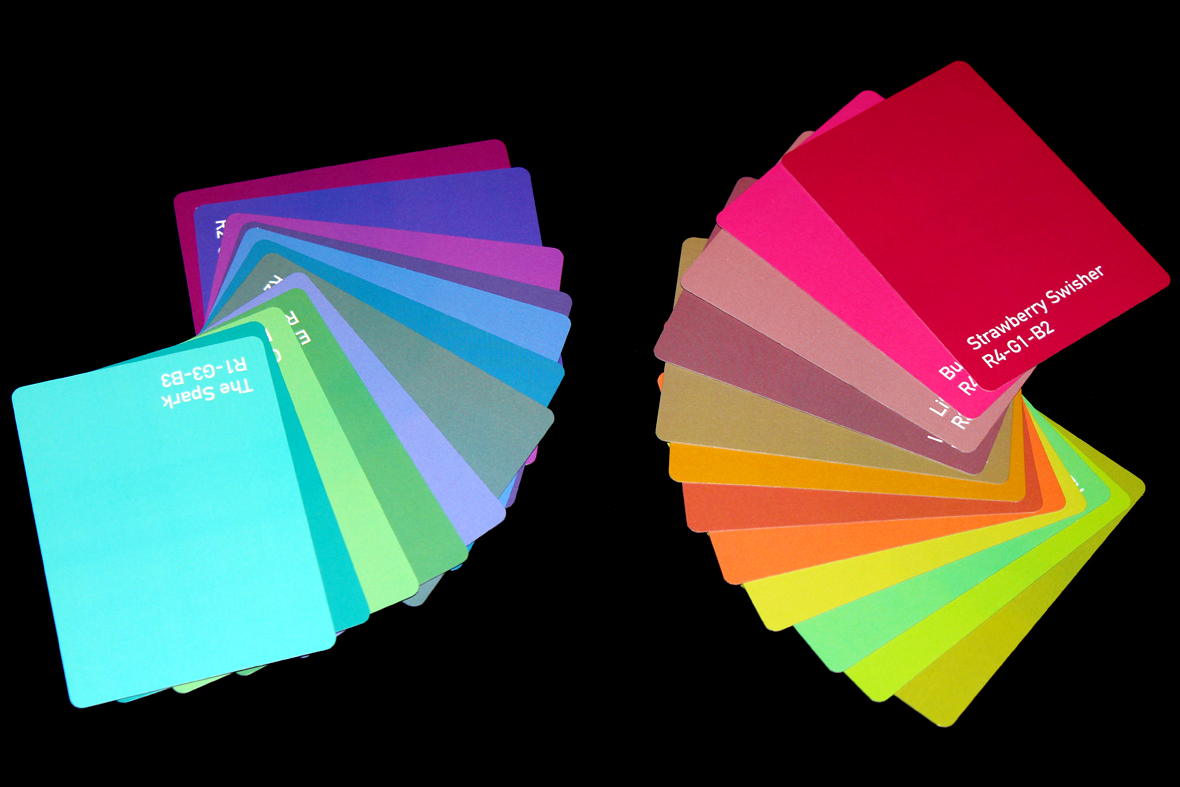 The Action deck should be prepared next; shuffle those cards up: 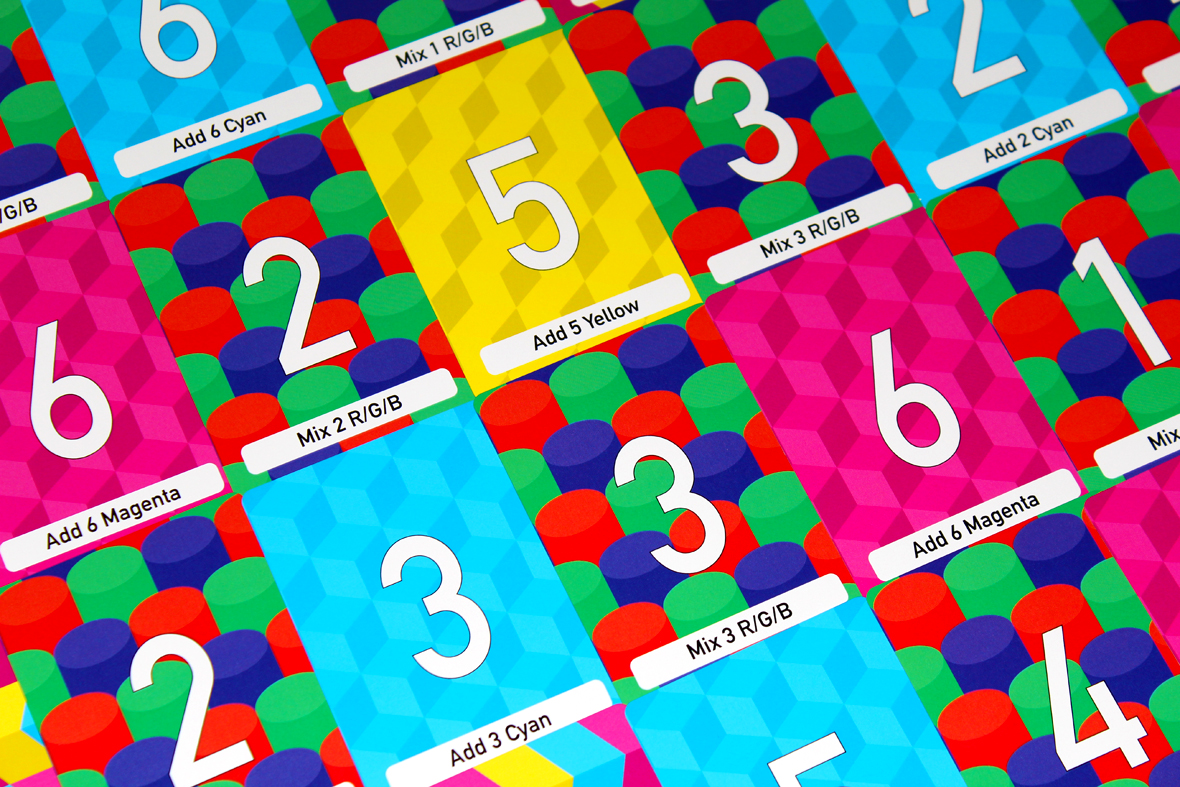 Make three rows of five face-up action cards with enough space between each row for some meeples. Give each player their Artist Meeple (or give them two, if you’re playing a two-player game): 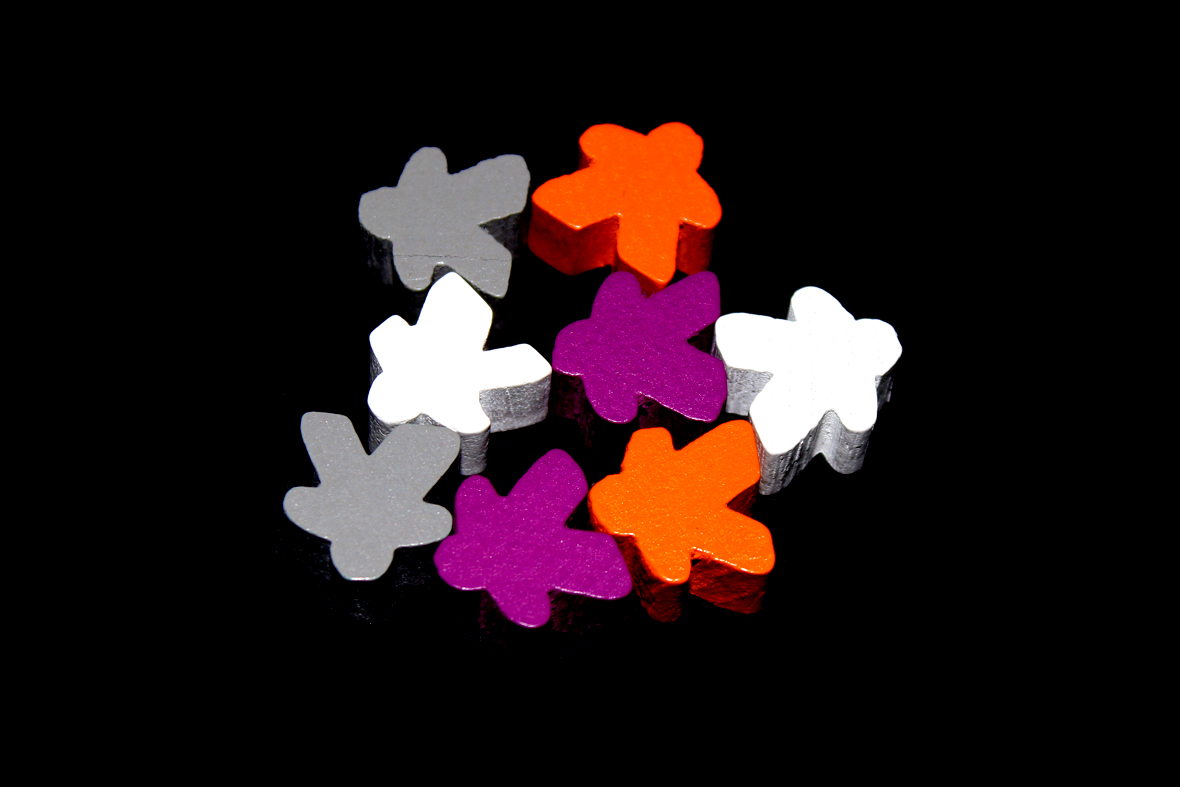 Give every player a Scheme that they should keep private: 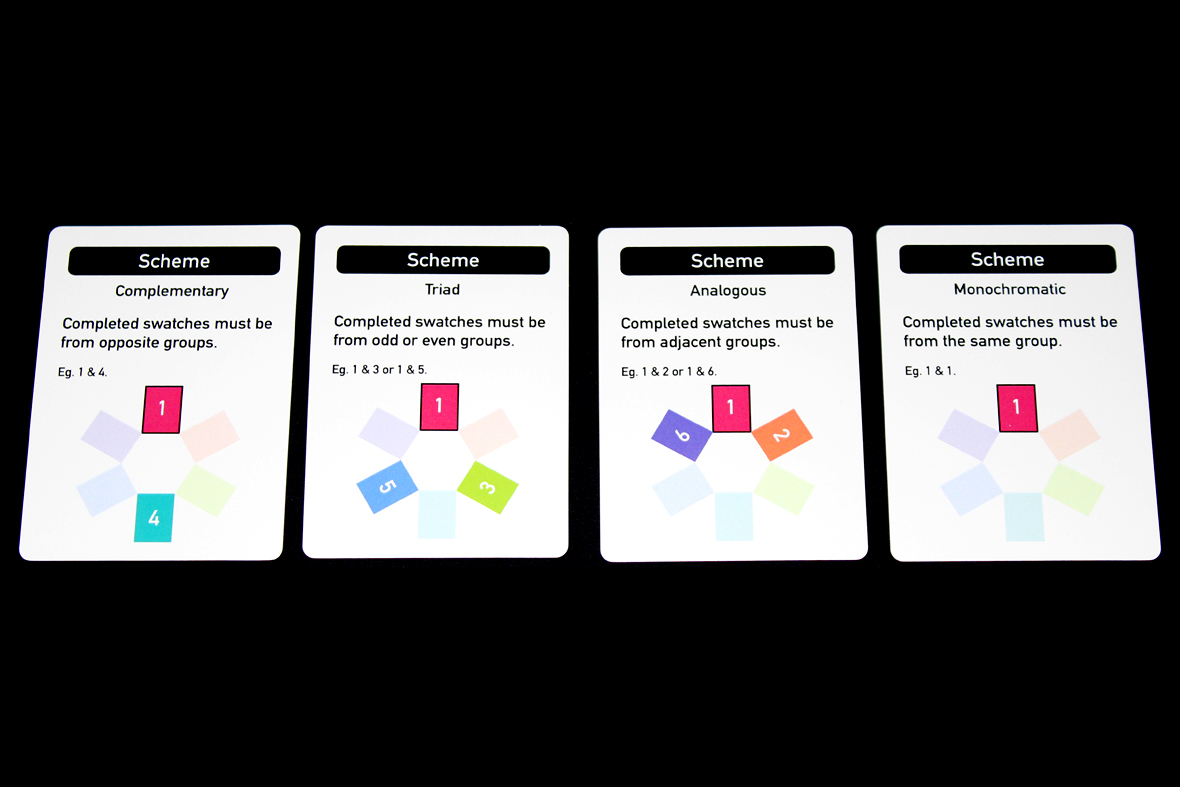 Finally, place the tokens in six supplies within reach of all players: 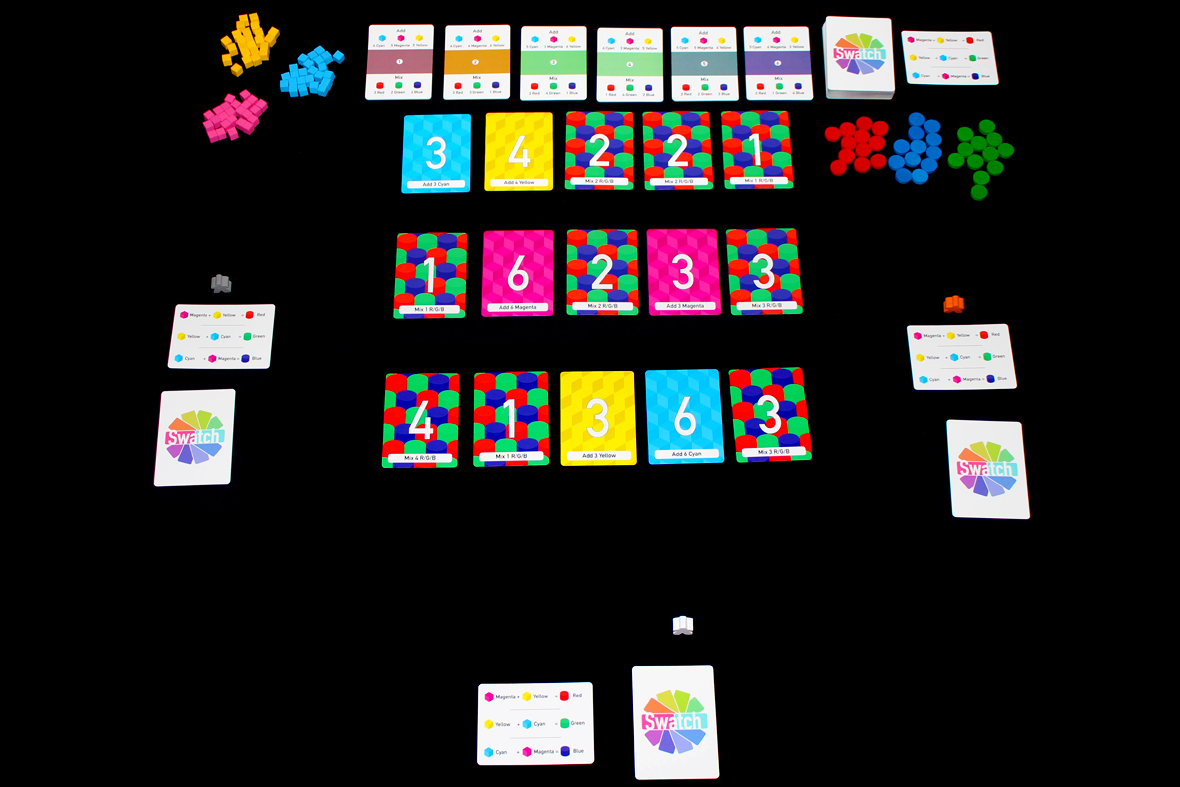 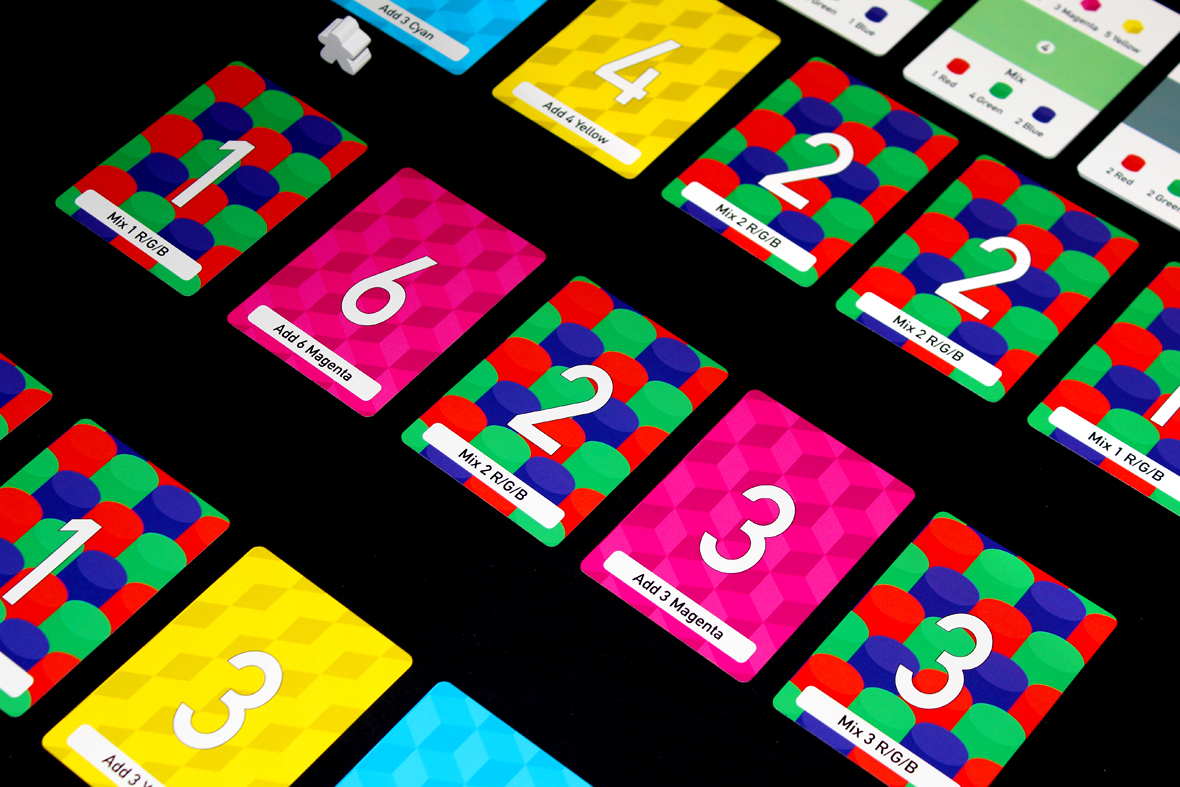 The gameplay cycle is pretty straightforward for Swatch, as far as I can tell. Your goal is to collect three Swatches, which are created by combining red, green, and blue tokens together. Unfortunately, you can only collect cyan, yellow, and magenta tokens, so you’ll have to put your color theory knowledge to work if you want to come up with the victory! Let’s dive in and see what’s going on.

During each round, you’ll take one turn for each meeple you have (so, two turns in a two-player game). Let’s walk through how a round plays out. Each round, all players are given a card for free from the deck, adding it to their hands. Then, each player takes their turn: 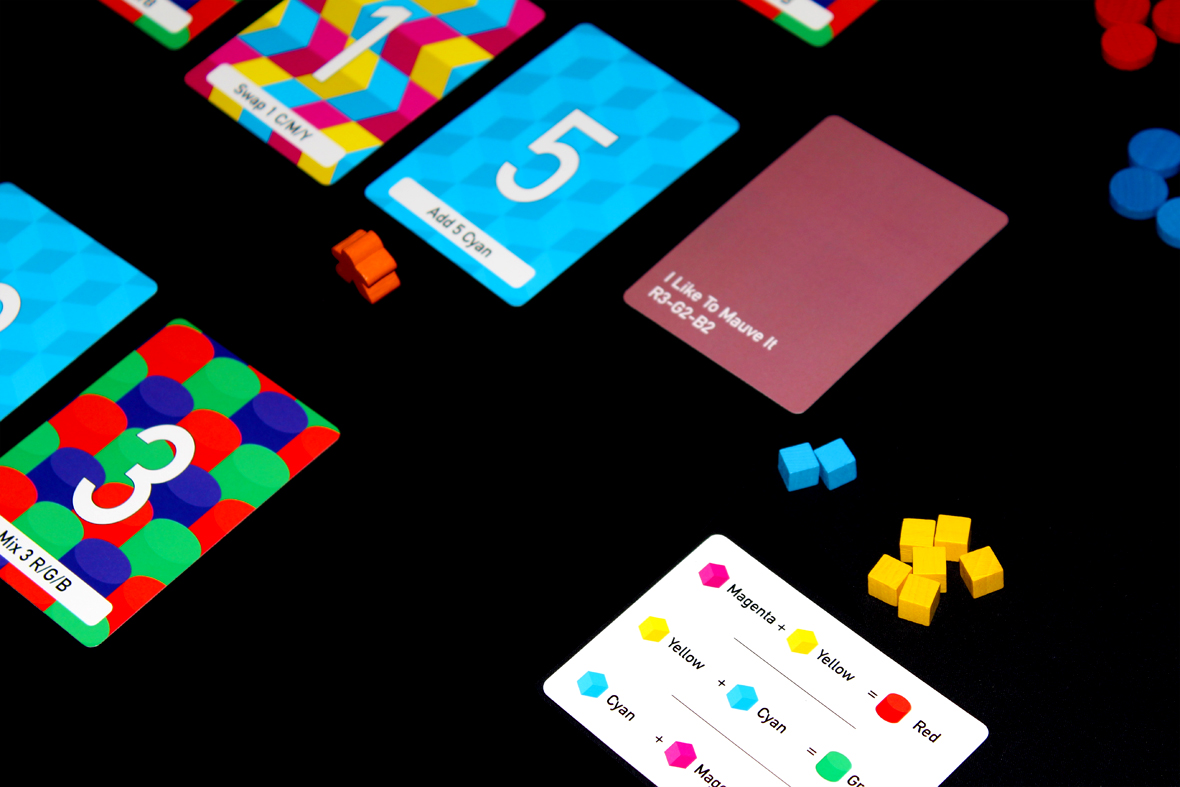 Take an Action Card from the Active Row. The Active Row shifts each round to be the row below the previous one. This means you start with the top row at the beginning of the game, and you move back to the top row after you start a round at the bottom row (it wraps around). To indicate that you want a card, place your meeple below it and then, you may do one of three things:

If none of those options appeal to you AND you are the last player in turn order, you may instead skip your turn to place on the next row. You’ll take your turn last when the other players get there. 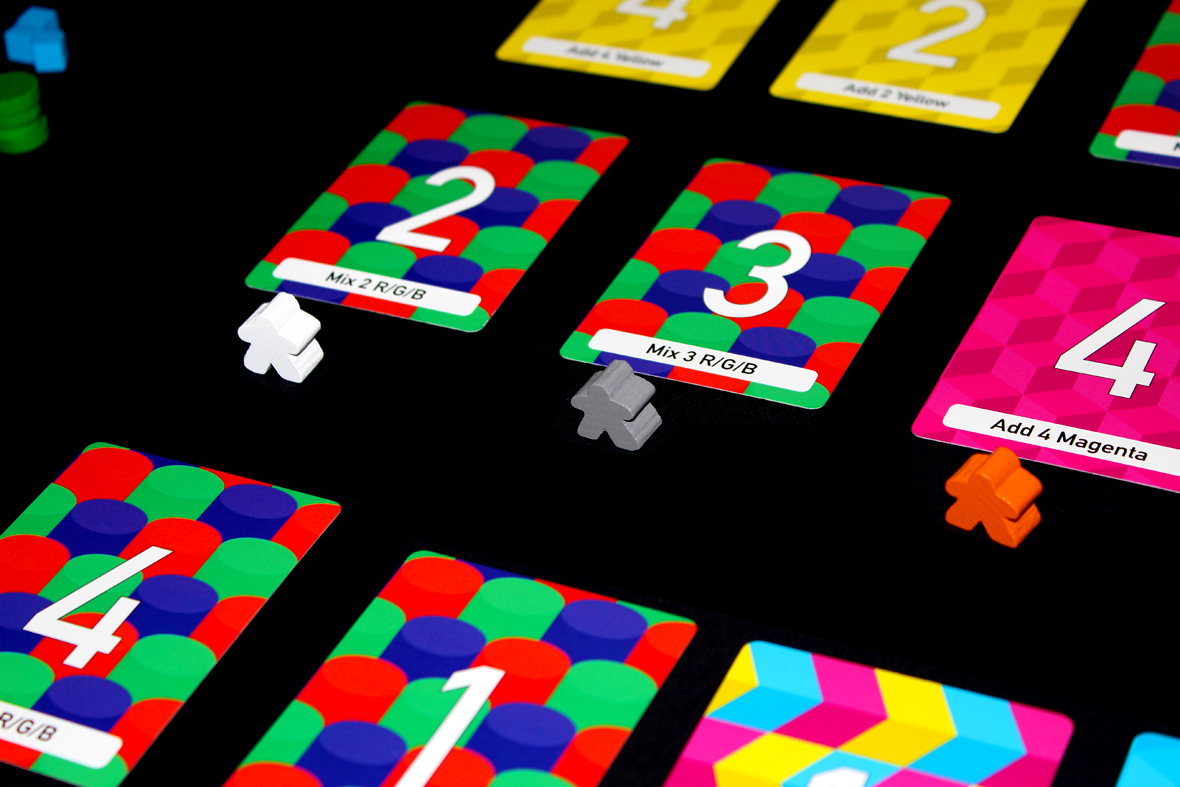 For either card, you must be able to do the card’s action fully to take it. This means if you cannot Mix a full 4 resources, you cannot perform that Mix action. Speaking of action types, there are three: 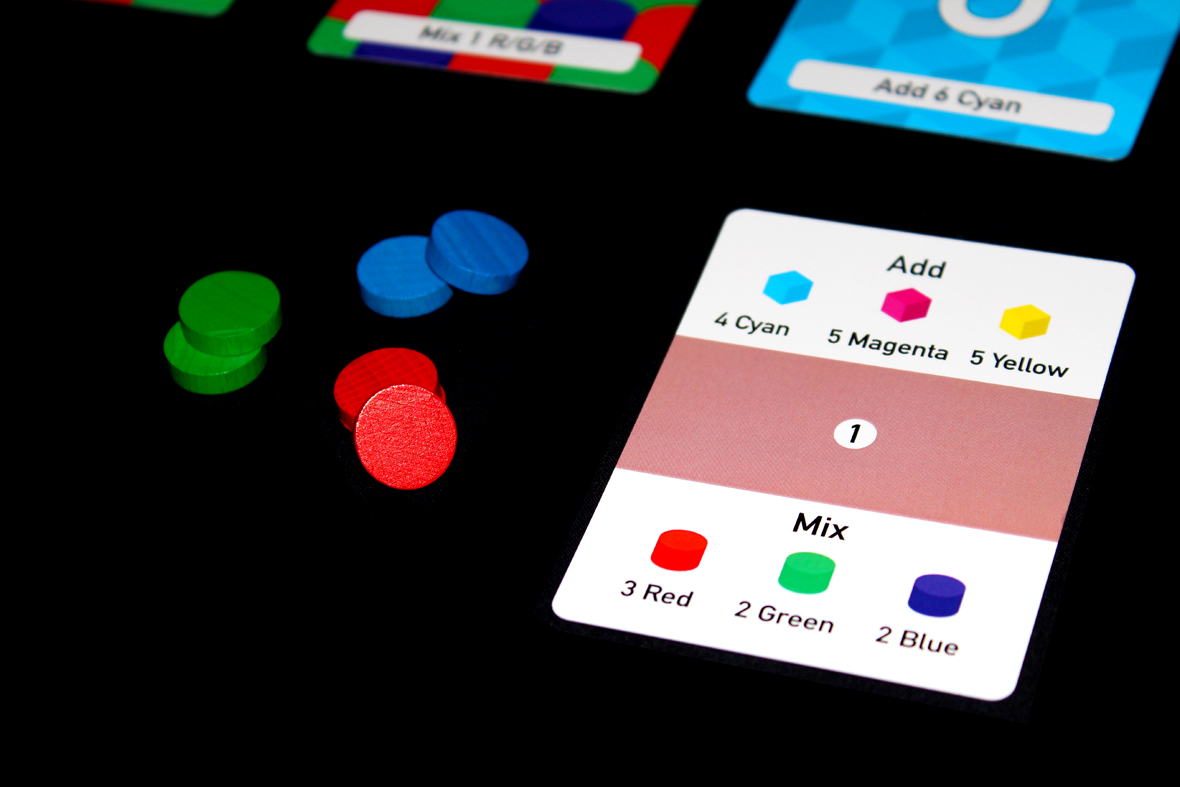 If, during your turn, you have the right number of Red / Green / Blue tokens to take a Swatch, you may exchange those tokens for the corresponding Swatch. Keep in mind that you must follow your Scheme in order to win. 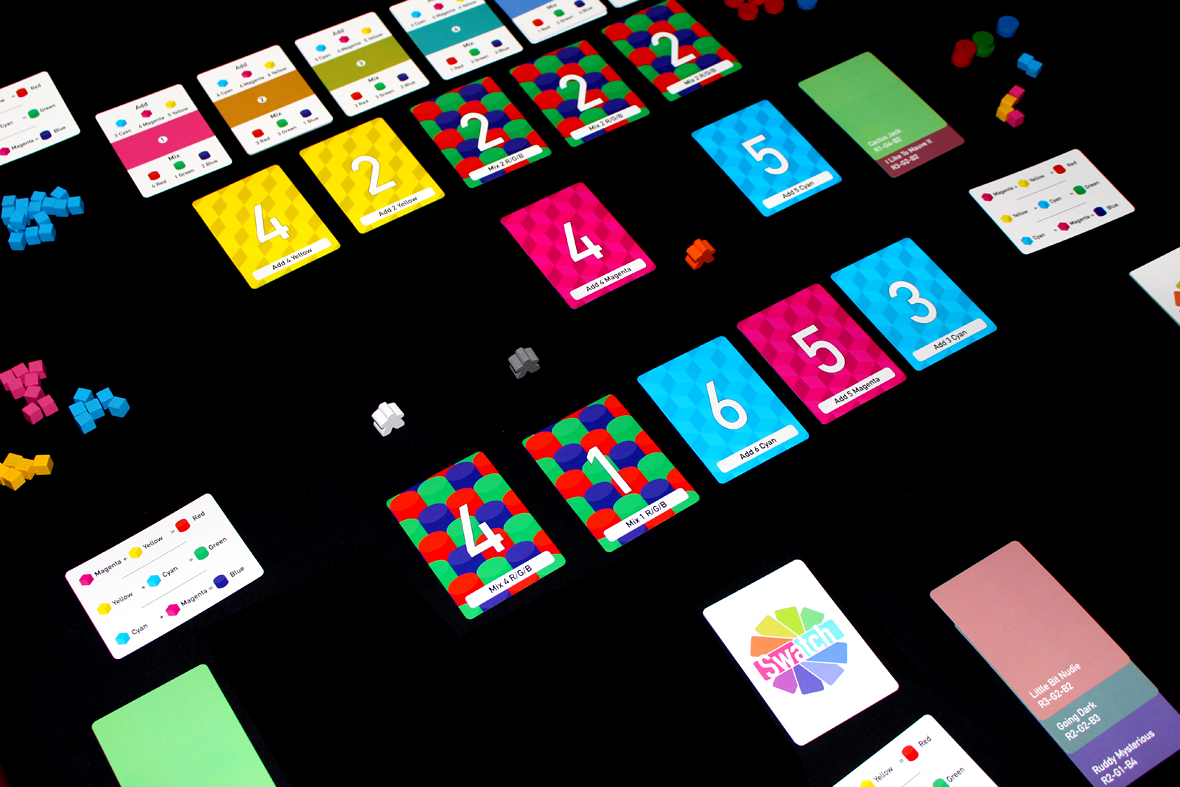 Once any player has completed three Swatches, they win, unless they still have resources. If they still have resources, they’re in limbo. Instead of taking a turn, they must move their meeple to the right side of the board. After the end of the round, they may then discard one resource. If multiple players would win at the end of a round, the player who completed their Scheme this round wins!

The game is pretty different at two players; much more for each individual player to do when they’re managing two artists at the same time. It also allows you to play a bit more in your own interest, since you can often secure multiple spots that you want for various actions. You still only get one card per round no matter what the player count, so you will explicitly have a 1:1 ratio if you only take one turn per round. Anyways, that’s getting into the weeds on that particular thing. With more players, you’re likely going to experience more tension around resources depending on how your luck shakes out. If you’re consistently drawing good cards each round, you may not care about your placement too much and might just opt to hang out near the front so you always get first pick. If you’re doing poorly but you can’t get cards to work for you, you may end up behind the power curve for a while. I think, to that end, I slightly prefer this at lower player counts since you get more turns per round and it’s harder to feel entirely shut out if the cards aren’t working for you (since you’ll pull two cards from the Active Row each round, even if you do only get one card from the deck). It’s a slight preference, though; not too big of a deal. 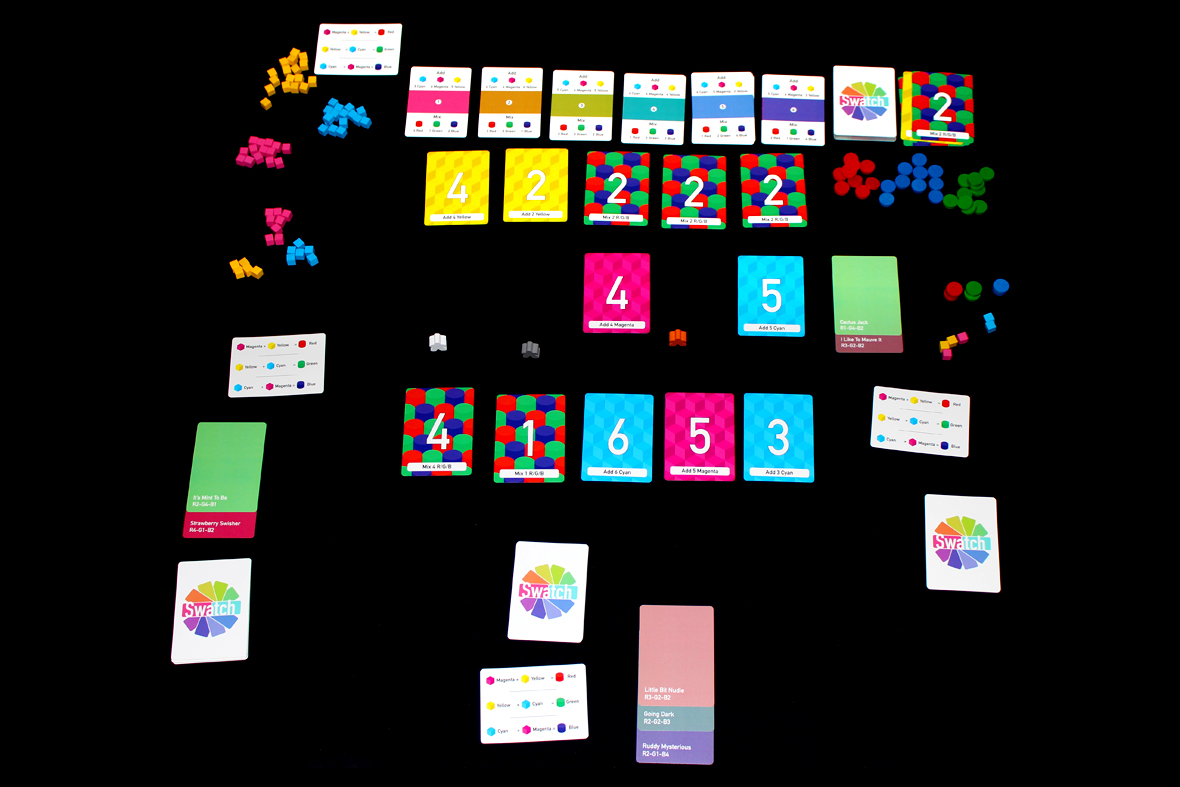 Overall, I think Swatch is just okay. For me, I think that it approximates a Splendor-style game market, but in an attempt to add a worker placement element in addition to the resource collection element it starts to show some of its seams in ways that I don’t necessarily think are positive. There are some good things, of course: it plays nicely with color and it seems to have been made by a designer that has both an eye and an enthusiasm for color, which makes the game feel more fun. My particularly high-level gripes are mostly around the way the game ends. My ongoing high-level rule for game endings is that when a winner has been decided, the game should end quickly. If, in this case, the player who “wins” has too many resources, then the game lags until they are either beaten by another, scrappier player (very unsatisfying for the player who is essentially the Hare in the classic fable) or until they shed all their remaining resources. Either of those cases are a “feels bad” moment for players, which can leave a bad post-game taste in your mouth. And I think that’s … not great. It seems like the kind of thing that will shake out a bit in more playtests, as though a happier medium exists. It speaks to the game being a bit rough around the edges. And generally, that’s okay for a Kickstarter game to be a bit rough around the edges; that’s the point of previewing. You get my opinion on a game that isn’t quite finalized yet. And, as you might notice from this, there are a few things that I hope get shaken out before the game’s finalized! Clearing up the rulebook, the graphic design, and the ending can make the game easier for players to get into and more satisfying for players to get out of, in my opinion. The core concept is interesting, though, and I’ll be interested to see how the full game turns out, but as far as Swatch goes in its current iteration, I think there’s some work I’d still like to see done before I can enthusiastically recommend it.