I know that writing about the day I’ve had for a review I plan on releasing days or weeks from now is kind of irrelevant, but I had a real banner day, today. Did the photography for five games! It felt almost like being back to normal, except then I remembered I couldn’t leave my house and was not making plans to do so before … March. So that’s fun, but I did also get a couple reviews finished that have been in limbo for a while, all of them partially done. Floor Plan is one such review, so, let’s see if all the wait was worth it!

In Floor Plan, you’ve been tasked to prove yourself as an architect by solving problems for a variety of clients and building their dream home. Rather than just solve one person’s demands, you figure, why not solve three at once? Surely that won’t lead to a Frankenstein home motivated purely by function over any general sense of aesthetic. You keep telling yourself, that, champ. But along the way, you’re going to learn to be thoughtful about the actual needs of the clients, whether it’s mobility, features, or social elements of the home you’re designing. You’ll need to turn a house into a home if you want to win; are you up to the challenge?

Very little! First, give each player a player sheet:

Then, set out the dice:

After doing that, reveal one card from each of the Layout, Design, and Build sets:

That’s most of setup! You should be here:

Finish up by setting one die face to 6 and rolling the other one. Players should draw a 6 x N square room (6 squares on one side, N squares on the other, where N is the other value rolled) such that it includes the shaded center box, and then put an L in the box to create their Living Room. Once you’ve done that, you’re ready to start!

In Floor Plan, players work as architects to try and satisfy the needs of their various clients. To do so, you’ll draw up rooms and try to meet their demands as best as you can to build a pretty nice house. Ultimately, your goal is to score points for fulfilling their demands, and then win with the most points!

To start a round, you’ll first roll the dice. Once you do, both players use the rolled value to either Build a Room or Add Features.

When creating a room, you use both of the dice values as dimensions for the room (for instance, rolling a 2 and a 3 allows you to make a room that is 2 blocks wide and 3 blocks high or vice versa). Once you’ve drawn the room on your board (it does not need to be adjacent to other rooms), you must fill one box inside of the room with the label for the room. Nothing else may occupy that space. There are, of course, a few caveats to room construction:

Instead of drawing rooms, you can add features. When you add features, you basically try to spruce up the property or the rooms to make them more inviting. Features work based on the number you roll; when you choose to draw features, you draw for both values rolled.

Various Clients are going to ask for things inside of their homes, and task you with fulfilling them. They’ll usually relate to a variety of combinations of rooms and features. While you can fulfill the same demand more than once, you cannot use the same features and / or the same rooms to do so. They have to be completely separate.

When you complete a demand, write it on any of the yellow post-its on the bottom of your sheet. Doing so will unlock the corresponding bonus for you to use. Bonuses give you some gameplay effects:

Each bonus can only be used once; be mindful! 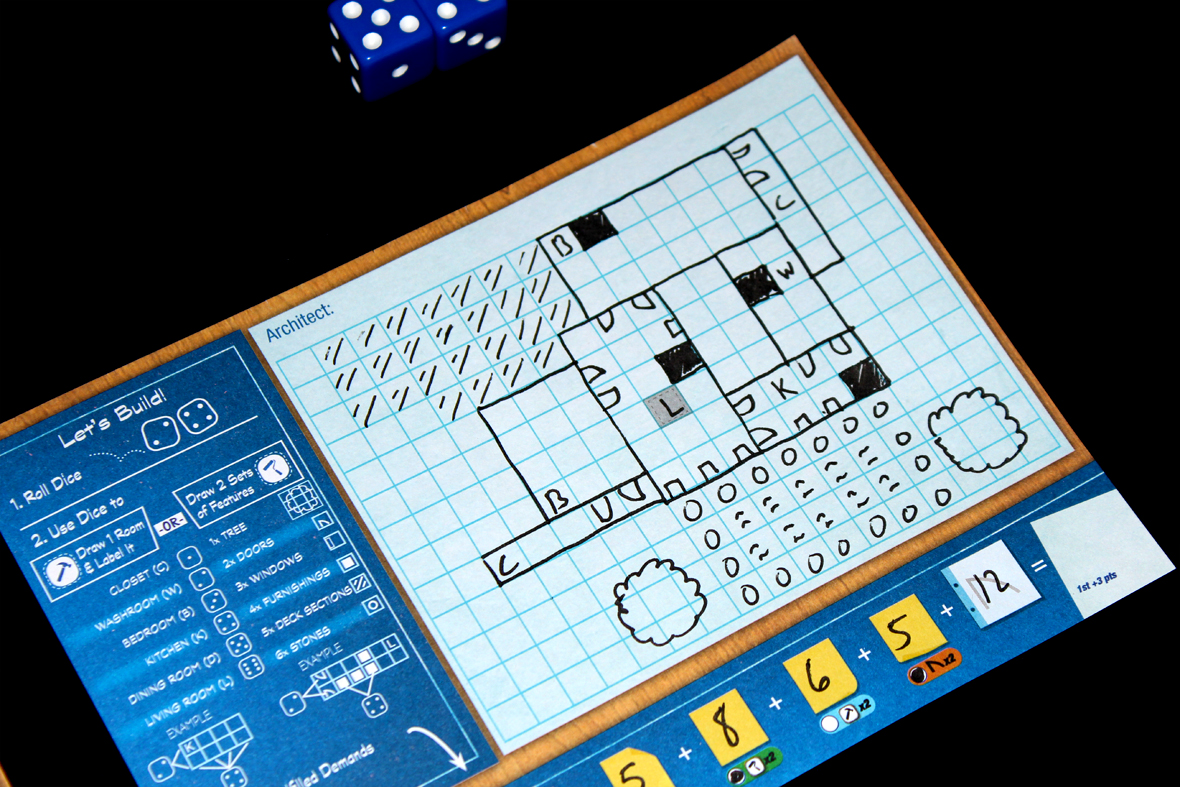 The game can end one of two ways:

Once that happens, the other players play an additional round, and the game is over. Don’t forget your Layout Bonus, but add your points together and the player with the most points wins!

Relatively few, honestly. The only “race” element of the game is that one player will end it when they can’t build a room / feature or when they fulfill all their demands. As player counts approach the ridiculously high end (100ish), I assume there will almost always be a Bad Actor who tries to end the game as quickly as possible to be a jerk (since even in 2020, I am not convinced we can have nice things). As a result, I suppose the game could be shorter as player counts approach the realm of absurdity, but in your standard games I wouldn’t expect a significant change in player time. Plus, higher player count games of this are more fun since you’ll get to see so many different potentially-viable floor plans! 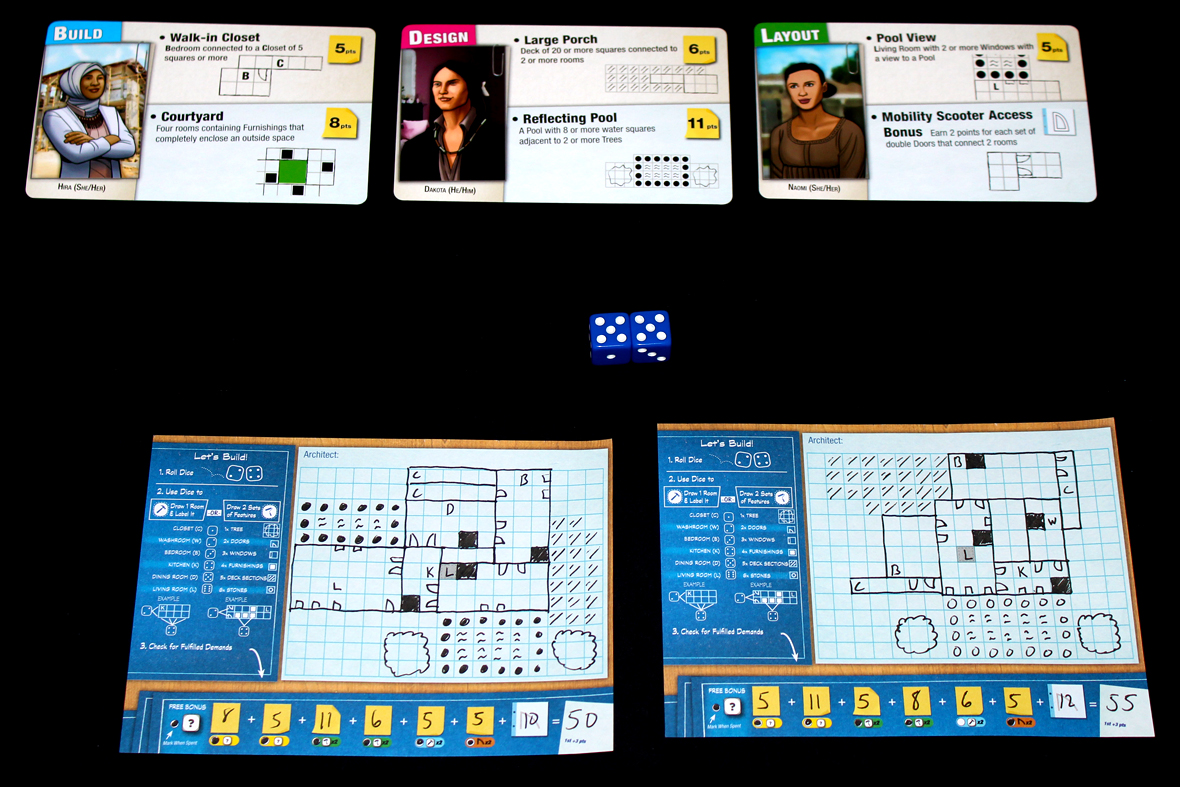 Overall, I think that Floor Plan is a lot of fun! I think a lot of it is that I’ve always been really into architecture, and Floor Plan lets me come the closest I feel like I’ve gotten in a game to actually designing a house. I think it’s a super cool concept for a game, and I’d love to see how it could be extended and applied. Imagine a whole set of games like Floor Plan: Theme Park or Floor Plan: Space Station or something, using similar mechanics with new spins to let you generate some pretty cool artifacts. I do wish there were a bit more scaffolding in place to push you to make an actually usable house, given that my last win came from a house with no external doors, just windows, but at a certain point if you’ve got tension between realistic gameplay and fun gameplay you’ve gotta lean into the fun, I suppose. That is my main criticism of the game, though: it’s a game with a lot of excellent parts, but it often feels like it is simply a collection of fun parts thrown together without always the most coherent through line. It’s still fun, for me, but I think there’s a game I would truly love hidden in these parts somewhere, which is why I’m kinda stoked about hopefully seeing more games in this series, yeah? I wonder if it’ll get there. In the meantime, though, it’s a pleasant and relatively simple roll and write with great art, excellent characters, and a pretty straightforward gameplay arc, even if I have yet to play a game where I haven’t messed something up. There’s probably a lesson here about playing in pen, but I refuse to learn it. Anyways, if you’ve been looking to design your dream home, you love a good roll and write, or you want to see what a game can look like when an actual effort is made to provide representation, I think Floor Plan really succeeds on all of those fronts! I really enjoy playing it.