So this is happening. I guess in normal reviews there’d be a short intro paragraph here about the history of The Settlers of Catan (henceforth referred to as “Catan” or “Settlers” with reckless yet mysteriously inconsistent abandon), but honestly I don’t know it and can’t really be bothered. If you’re interested it’s on Wikipedia, probably. Regardless. It’s a board game, which is great, because that’s what I’m writing about.

So, if you’ve never seen or heard of Catan before, basically you’re playing as a set of intrepid explorers who happen across an island and then have no choice but to plunder its literally five resource types in the hopes of one day claiming the island for your own. I’m at least 35% sure this is the game’s backstory, so that’s what I’m going with.

Catan is played with hex (short for hexagonal, from the Swiss “hexagon”, meaning “a shape with six sides” or “you shouldn’t trust etymologies that you get from a board game blog”) tiles, which may be a shock to anyone who hasn’t played a game like this before. If you find that you’re getting overwhelmed by the sheer number of sides of these tiles, you should sit down, breathe into a paper bag, and try something more like Carcassonne, Lanterns: The Harvest Festival, or Betrayal at House on the Hill, whose square tiles can make you feel whole again.

Now, a nontrivial portion of the game is actually just assembling the board, which is locking the 6 ocean tiles together and then shuffling / laying down the resource tiles and then laying down the number tiles. I have a strong recommendation / strong opinions about this, so I’ll make those clear from the writeup. Before that, I am going to make some enemies by establishing a clear and consistent way that I’m going to refer to the resource tiles. There are plenty of disagreements surrounding this, so, just call it what you want.

There are a surprising number of ways to set this up, but I’ll leave you with some personal suggestions:

This is where the game gets interesting, for some definition of game and interesting.

Rolling for Resources and Robbers

As you may or may not know (I’m inconsistently asserting that you’ve read the rules), you roll the dice and get the resources for the number that comes up, assuming you have a settlement (little house) on that tile’s corner. If you have a city, you get two, and if you have nothing, you surprisingly get nothing. If you roll a seven, the table collectively tenses up, as anyone with more than seven (>= eight) resources in their hands must discard half, rounded down (for some reason), and then the robber makes his rounds. You can place the robber on someone’s tile to both steal one of resources (a polite middle finger if there ever was one, especially if they just discarded half) as well as block that tile from collecting resources for as long as the robber is there (a more aggressive middle finger). For reasons known to some we’ve house-ruled that if you roll seven in the first two rounds (round meaning complete cycle of player turns) you roll again, just so we can get the game going.

Personally? I kind of hate the robber. Sure, it’s useful to have someone lose half their resources if they’re on a roll (pun intended or whatever), but meh. After playing a game where we rolled seven consecutive sevens (for those of you doing the math at home, that’s a 0.000357% likelihood, I believe), we lost faith in everything and descended into a neverending fit of madness and honestly we just stopped using the robber unless someone was going to win their next turn. We found that this made the game actually slightly easier and a lot more friendly, to the point that we now refer to this as Friendship Catan or The Best Friends of Catan or something equally … that. I’d recommend this strategy. If you have to roll the robber just move it to the 12 or the 2 tile. No hurt feelings.

You can (and honestly should unless you’re the Magnate of Catan) consider trading with other players, in which you offer resources in exchange for other resources. This is a very difficult concept to understand, so I will explain it in full in another blog post later. Key insights / house rules here are that you can only trade DURING your turn (seriously, stop.) and you should offer at least one resource in exchange for at least one resource (to prevent donating to help the second place person beat the first place person, though you can still trade one sheep for twenty stone if you really want to screw first place and general etiquette).

If you find yourself with too many of a single resource (“The SheepLord”, “Making it Grain”, “Oreverloaded”, “Bricked”, there are others), you can trade either four of yours to the bank for one of anything or use the ports, provided you have a settlement on them. Some people will offer you a port fee, in which they’ll take three of your resources and trade you one of anything back. This is a good deal if you need it, and it’s not if you don’t. Economics, yay! Overall, trading is nice and you should do it, because if you’re the person that trades with everyone then everyone usually trades with you. This breaks down somewhat in the endgame, as nobody wants to trade with the person who is one point away from winning (Settlements are one point, cities are two points, Largest Army / Longest road are two points each, and victory point cards are one point). Oh well.

So, in order to settle Catan, you must trade resources to the bank for stuff, as outlined on this handy card.

Great! That’s about all there is to say. Development cards can give you sweet powers or let you move the robber or score you points, so keep those face-down when you get them. Due to a profound laziness half-assedly disguised as a desire to keep the cards a surprise, I won’t show you what the development cards look like. Other than that, it’s pretty straightforward and I don’t really have much else to say about it.

So this is actually where Catan shines a bit. It has a lot of varied replayability even in the base game because your strategies shift drastically based on who you play with and how the board gets set up. Do you try to secure the sheep port and rule Catan with an iron fist? Do you focus on development cards and swarm Catan with your armies? Do you build cities and settlements and settle Catan as you would directly surmise from the name of the game itself? It’s up to you. Personally, I find that most people focus on wood and brick in the early game to build roads and settlements and then focus on wheat and stone in the end game. Nobody focuses on sheep, ever (save for the SheepLords, but they’re few and far between). Sheep are the trash resource, but you sort of need them to build settlements and development cards, which is unfortunate. This can all be false if you, too, can get the sheep port (two sheep for any one resource of your choice) and become the SheepLord of legend.

Different people focus on different things, so do that.

So what do you think about this game, then? People will ask. And honestly, I want to like Catan a lot more than I do. It’s got fun sorta area-control mechanics, there’s some tension when you’re competing with another player to settle a good spot, and it’s got a nice thing where once you start rolling in resources you can rapidly accelerate to winning, but there’re a few issues. Let’s look at it as pros and cons: 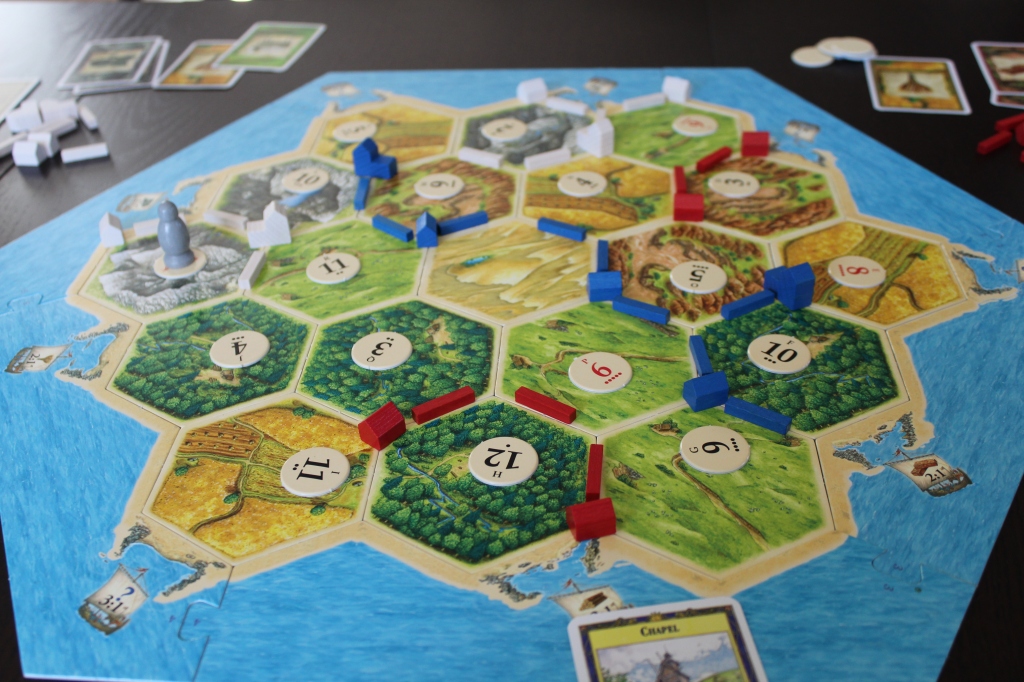 Honestly, I want to like it more, and I enjoy playing it sometimes, but I can’t say it’s a classic game for my collection. It’s just missing a lot of other, more modern features in my opinion, and it tries to add that later for lots more money. If I were rating it on its economic model, I’d definitely give it top marks, but that’s … not the case.