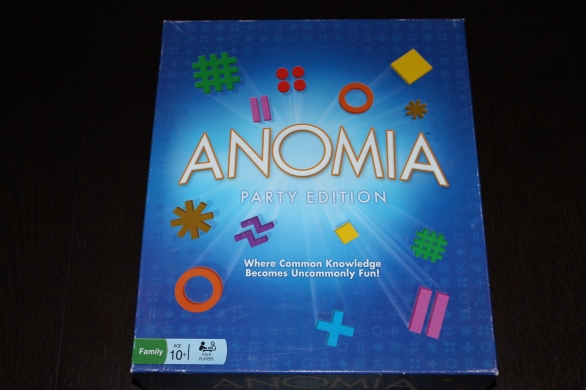 And now for something completely different. Anomia takes us back out of microgames and into “short” games, which is to say back to the place that we started and were likely going to continue always being at with the occasional minor detour in the same way that your permanent address is the place that you live, but you’re allowed to leave sometimes without having to forfeit your permanent address because you’re not permanently there. Probably.

Anyways. Anomia is a fast-paced word game based primarily on understanding examples of categories and being able to quickly match colors and symbols. Now, reading this, you’ll probably think that those both sound pretty easy. If you ever get the chance to play Anomia, you will be quickly surprised at how wrong you are. I’ll breeze quickly through setting the game up (it’s very fast!) and then explain why it’s such an interesting departure from other games I’ve played.

No, seriously, this is easy. Each of the decks is color-coded, like so:

Pick one! That’ll be your starting deck. Note that the base game comes with two decks and the Party Edition comes with six (completely different from the base two decks). Personally, I’d recommend all eight, but that’s me. Anyways, shuffle a deck, split it into two piles, and set the two piles down with some space in between (about two cards’ width). This will make sense later, as I’m explaining the cards. That’s it!

On it are two of the same category and some sort of colored symbol. There are eight different symbols in the game, and they each have a different color so that the game is just a little bit more difficult for colorblind people (thankfully, the shapes change, too). Now that this lengthy explanation of what an Anomia card is has been successfully completed, let’s go straight to gameplay.

Anomia is played in turns, where each player on their turn flips a card off of one of the decks face-up in front of them in a stack. If your symbol is totally unique, then nothing happens and you keep moving, covering that card with another card on your next turn. Note that you sometimes have more than one face-up card in a pile in front of you, if you continually don’t match anyone. Should your symbol match another player’s symbol, that’s where things get interesting. You immediately enter what’s called a Face-Off (no, not THAT Face/Off) with that player. You now need to give an example of their face-up category before they can give an example of yours. To give a more concrete example, if I had just drawn the card in the picture I posted above, the other player would need to say an edible plant (there are many) before I could say an example of what was on their card. Should you win, you take their card and place it face-down in a pile behind (or next to, I’m a board gamer, not a cop) your face-up cards. Now, remember that you might have a pile of cards face-up in front of you. This means that if you lose a face-off, you might reveal a card that still matches their symbol (or another player’s symbol!), forcing another face-off. This is called a cascade, and is totally legitimate. You must resolve all face-offs and cascades before the next player can take their turn. Sounds easy, right?

As will be a common theme in this blog, the only way to make something better is to add needless complexity. And that’s where these cards come in:

That’s right. Wild cards. (Remember how you left a space in the middle of the two decks? Did you not?) While a wild card is face-up, the two symbols on the card are also considered matching. A wild card can only leave play when it’s covered up by another wild card, so until someone else draws one, you can also have face-offs between those two symbols. Because of this, when a player draws a wild card, all face-offs must be resolved immediately, and then that player draws another card before ending their turn. Please note that drawing a wild card cannot cause a face-off between three people. I get asked this a lot, but I’ll leave it as an exercise for the reader why that’s not the case.

The game ends when the deck is depleted. Count the face-down cards you have, and the person with the most cards wins! Hooray!

The Cards and You

One of the weirdest things about Anomia is that you cannot and should not flip cards as you normally do (pick the card off the top of the deck and flip it towards yourself), as it makes it harder for everyone else to play the game (since everyone should see the card simultaneously). With that in mind, there are some handy rules you should follow:

To reiterate, you should not see the card any sooner than anyone else sees it, otherwise you’ll have an unfair advantage. More often than not it’s because the player has their hands in such a way that they’re blocking your sight line to their pile either during or after their flip. This is a forgivable thing that many people do, so just nudge the player next to you if they’re accidentally covering the pile with their hand or are flipping the card in a way that makes it tough for you to see it.

So there’s one weird rule that’s enforced sometimes, and that’s what people call the “No Repeats” rule. That means if I name an example of a card while it’s face-up, nobody can use that example for a subsequent face-off. This also applies to failed attempts to win a face-off. If you have “Color”, you can’t keep yelling “vermilion!” until you get it. You have to name a different color each time. Naturally, this can be abused (imagine having month and someone names them all), so we’re a bit flexible around actually applying it. This also prevents people from maliciously listing examples to try and stonewall people.

The only major exception is that you can use the same answer for different cards. This means if you have “fruit” for one and “color” for another, you’re totally fine saying “orange!” for both.

Not a whole lot of advice here; it’s a word game. Try learning some … words? So there are a preposterous number of categories on Anomia cards. (Rock opera! Edible seeds! Explosion sound! African City! Famous Mother!) Honestly, you’re going to need to know an example of one, or else you’re going to sit for three rounds while someone else takes all your cards because you can’t think of any African cities or rock operas (both pretty challenging categories on the spot). That being said, I do have some recommendations:

I think I’m gonna retitle this section since my final thoughts and verdict are really in the next section after I give it a ranking. This is more the pros and cons section, since it has pros and … cons.

I’d call this one of my favorite games, and certainly one of my favorite party games. It’s fun, it’s fast, and it’s frenetic. I like the variety of the decks, and I like that it’s very different from most of the other games in my library. For me it’s a great bridge between the Taboo / Bananagrams / Scrabble style games I used to play and the games I play now. I think if you’re looking for something to get a group talking and energized, this is a great game to start off with. Then, once they’ve loosened up you can bring in some of the other games in your collection. It’s got a lot going for it.