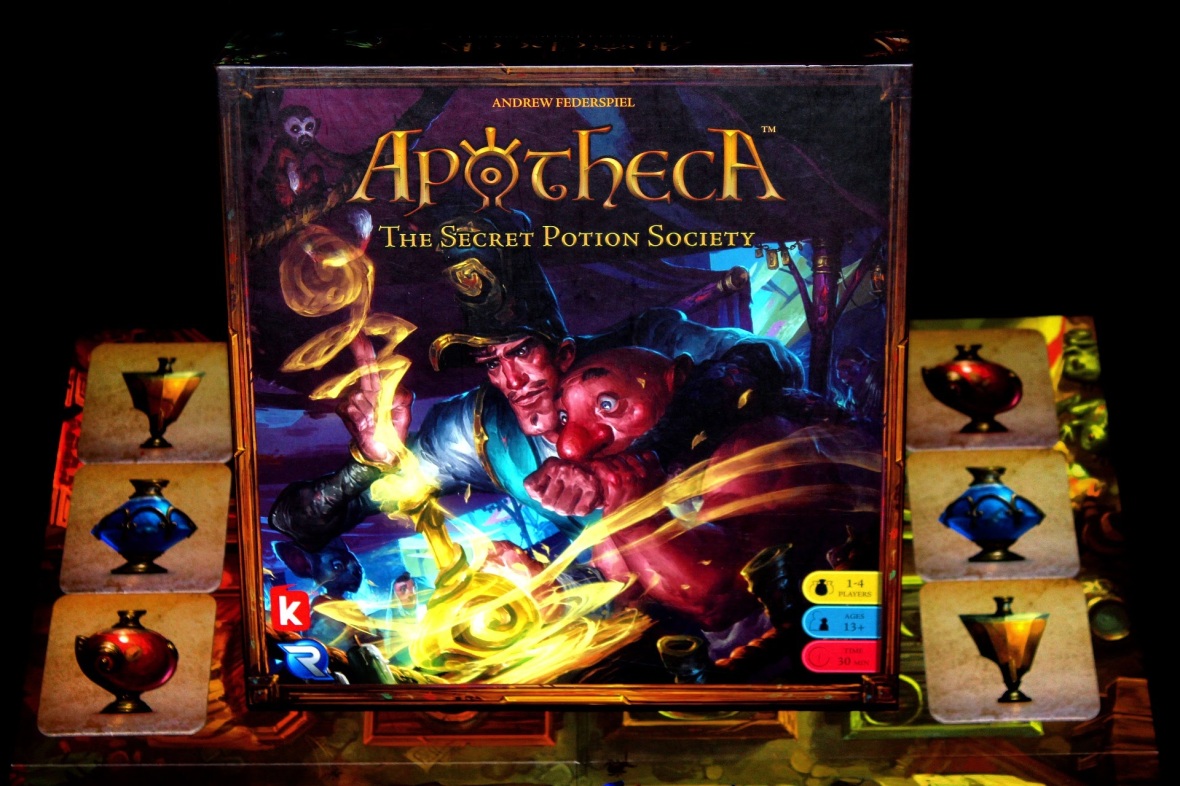 Another week, another game off of Kickstarter. This one actually arrived only a month ago, so we’ve been playing it a bit (and that 30m playtime [usually less] helps a lot with getting it to the table). This is a bit far from my usual, as it’s a fairly abstract strategy game (think like Chess or Checkers), but it was tough to turn down the art and the theme, so here we are.

In Apotheca, you and other players are new potion makers making secret potions. You can hire apothecaries to help (for a price), but once they’re satisfied with the potion you make them they’ll leave you (as they do, I suppose) and you’ll have to make new friends if you want to succeed. Can you become a potion master? Or will your haphazard attempts to mix and swap ingredients blow up in your face?

First, lay out the board. It’s a big board. You’ll also want to shuffle the tiles and flip four face-up in the corners. Finally, choose which player goes first, and add two more tiles face-down (with their arrows pointing towards the second player) such that there’s a complete diagonal line of four potions from one corner to the other (since the board’s symmetrical, it doesn’t really matter which line, as far as I know), with the outer two face-up and the inner two face-down, like so: 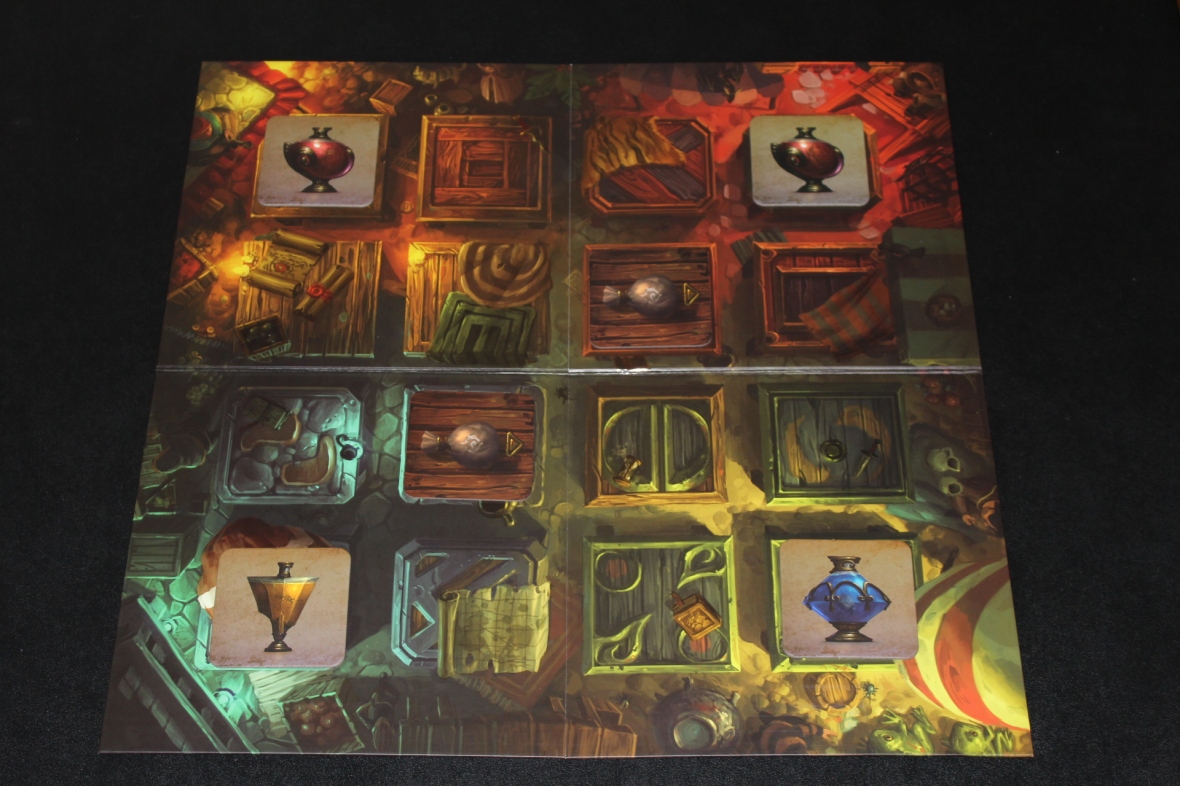 Next, you’ll want to set up Apothecary Alley. You should have a bunch of sort of … mantles? I’m not really sure what to call them, but one should have two red gems on it, one has two yellow gems on it, one has two blue gems on it, and one has one of each. Put them in an ordering (I prefer the one below) and shuffle the Apothecary deck (the deck of cards). Give each player an Apothecary (they should reveal them, and it’d be helpful if they read the card aloud to all the other players), and then place the deck in the three-spot and flip a card face-up into each of the two-spots, like so: 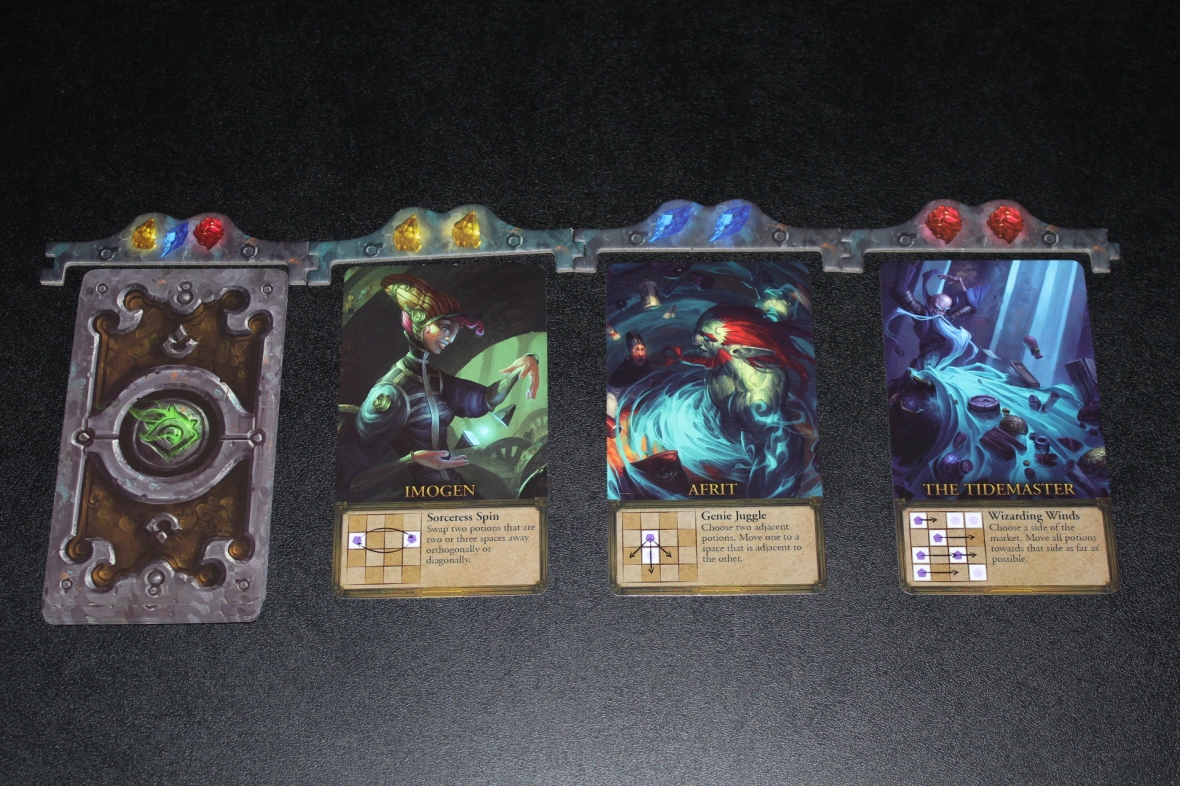 The Tidemaster is the best. Maybe.

At one point in time I tried sorting the gems, but it’s easier (and honestly kind of looks cool) this way, so just dump the gems out such that everyone (or at least someone) can reach them. If your table space looks like this, you’re ready to begin: 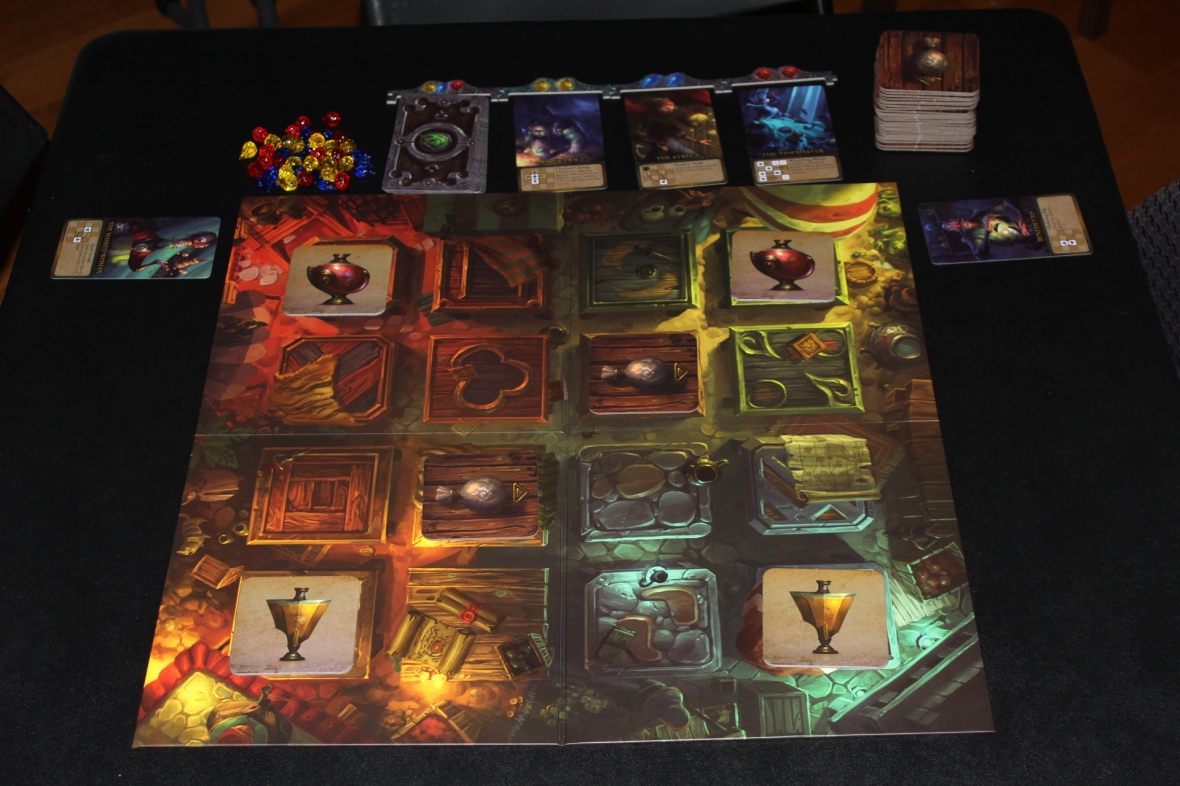 So every turn (with the incredibly important exception of the first player, who only takes one action on their first turn), you can take any distinct two of the following actions (as in, no repeating the same action twice):

Note that if you cannot perform the action, it doesn’t count as you taking the action. That’s kind of important, so remember it. If at any point on your turn you match three potions in a row (orthogonally, not diagonally), you remove those three from the board as a match. Then:

If you trigger more than one match (preposterously), just resolve them one at a time in whatever order you’d like.

There are also four special matches: 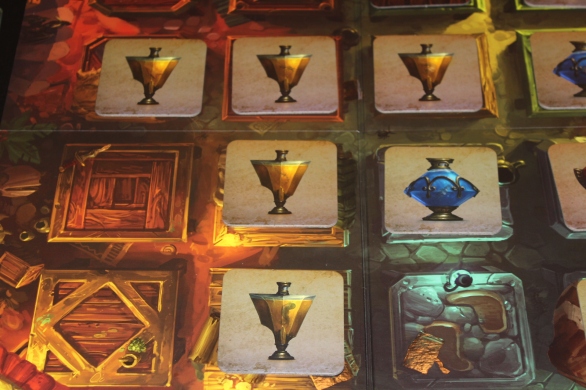 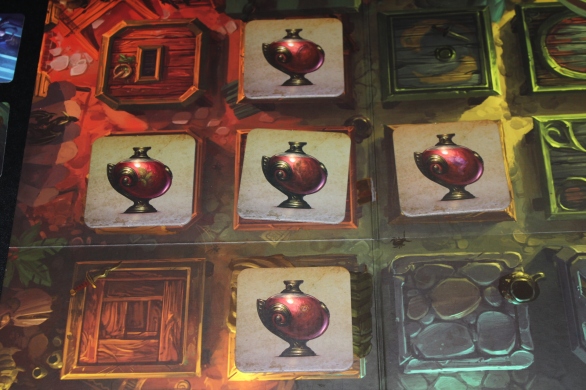 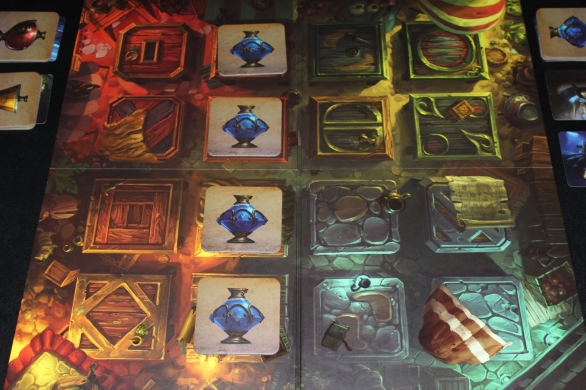 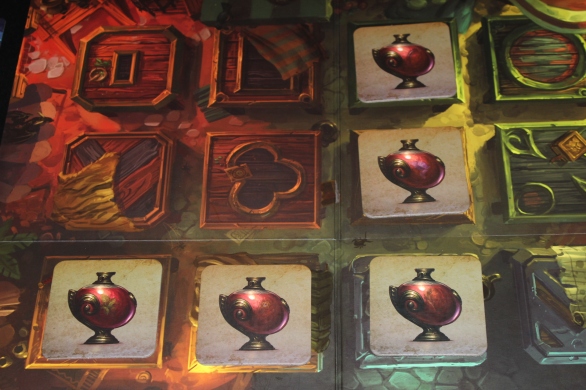 I call them the Four-Line, the T, the Cross, and the L (and I’m going to assume you can figure out which is which). If you get any of those, take a gem of that color in addition to the normal benefits of getting a match. That being said, honestly, unless you’re playing really well, the other player is playing really poorly, or you get really lucky, I wouldn’t expect that to happen all that often.

Play continues until any one player has satisfied three Apothecaries, in which case they win. As you might imagine, it’s impossible to tie, so no tiebreaker! Hooray.

There’s also an additional variant called Master of the Market, in which other players take on one player in a 1 v. many game style that I haven’t seen since, like, Betrayal at House on the Hill, the ill-advised Bioterorist role in Pandemic: On the Brink, or that psychotic friend who keeps suggesting that we play Adversarial Hanabi. Unfortunately, I haven’t tried it, but it looks cool and adds replay value to the game, so there’s that.

There are actually pretty significant differences, so I’ll outline them each in turn.

So this is the solo game variant. In this, start by putting the four face-up potions in the corners, giving yourself an Apothecary, and setting up Apothecary Alley. Then add six additional face-down potions (not facing you, unfortunately) in a checkerboard pattern on the board. After that, add 16 more potions in two 2×4 sets on either side of the board, giving you a setup that looks like this: 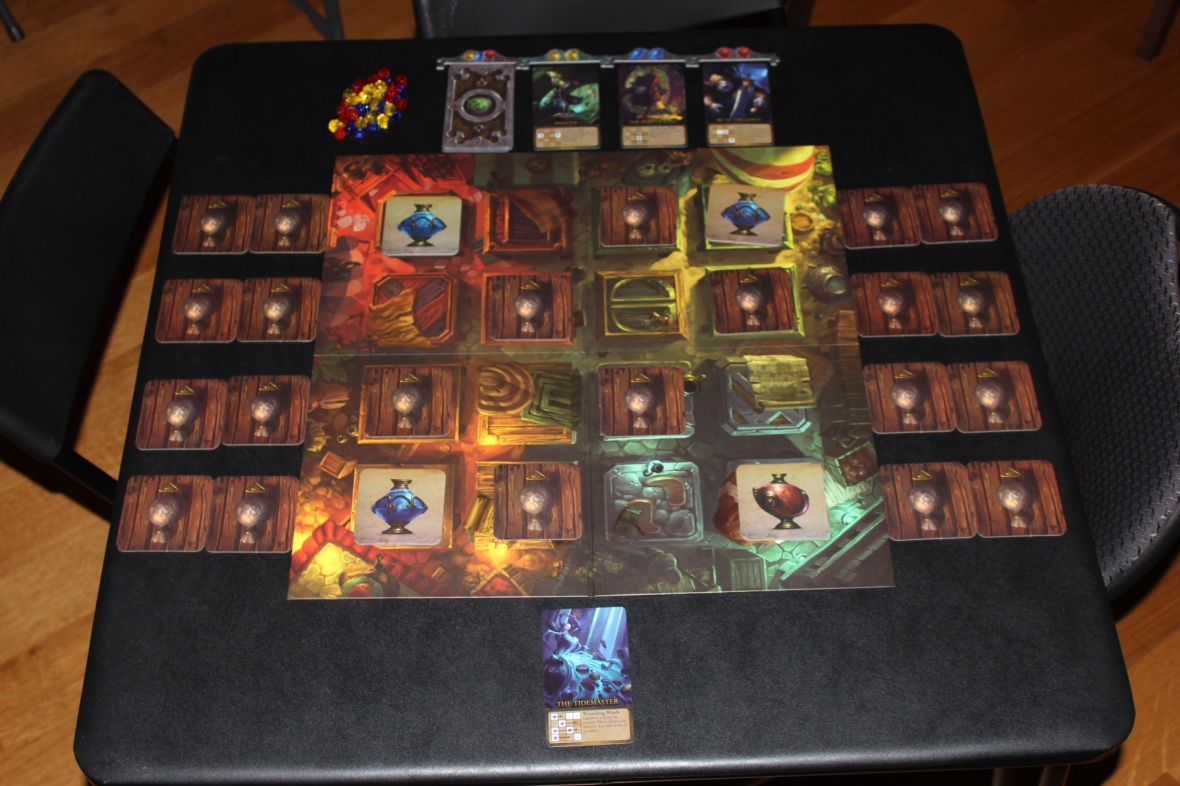 Here are the gameplay changes:

When you make a match, the following happens:

Game ends when you can’t place another potion. If there aren’t any potions left in the 2x4s outside of the board, you get an extra 5 points! If you manage to get a high score, share it in the comments. I think my highest is 24?

This is the normal player count. See Gameplay.

Personally, I don’t recommend playing with three. I think it ends up being a kingmaker situation in which one player cannot win, but they can definitely choose which player gets to win. Or, at least, that’s been my experience the few times I’ve played with three. There’s just always one player that gets too far behind to actually be in the running, and it creates a situation where the player who benefits most is usually the player whose turn is immediately after the least experienced player.

This is kind of awesome. You are partnered on a team with the player sitting diagonally from you (or across from you, depending on how you sit) such that the teams are A B A B. Unfortunately, you can’t share gems or see each other’s face-down potions. For an added challenge, try disallowing table talk so that you can’t advise your partner on what to do on their turn.

This is a pretty fun variant, though I think the game is strongest at 2.

This is a pretty highly strategic game, but with just enough bluffing that you can try and play some amazing mind games with your opponent. In fact, I highly recommend mind games. That being said, there are definitely some things you should do to try and maximize your success: 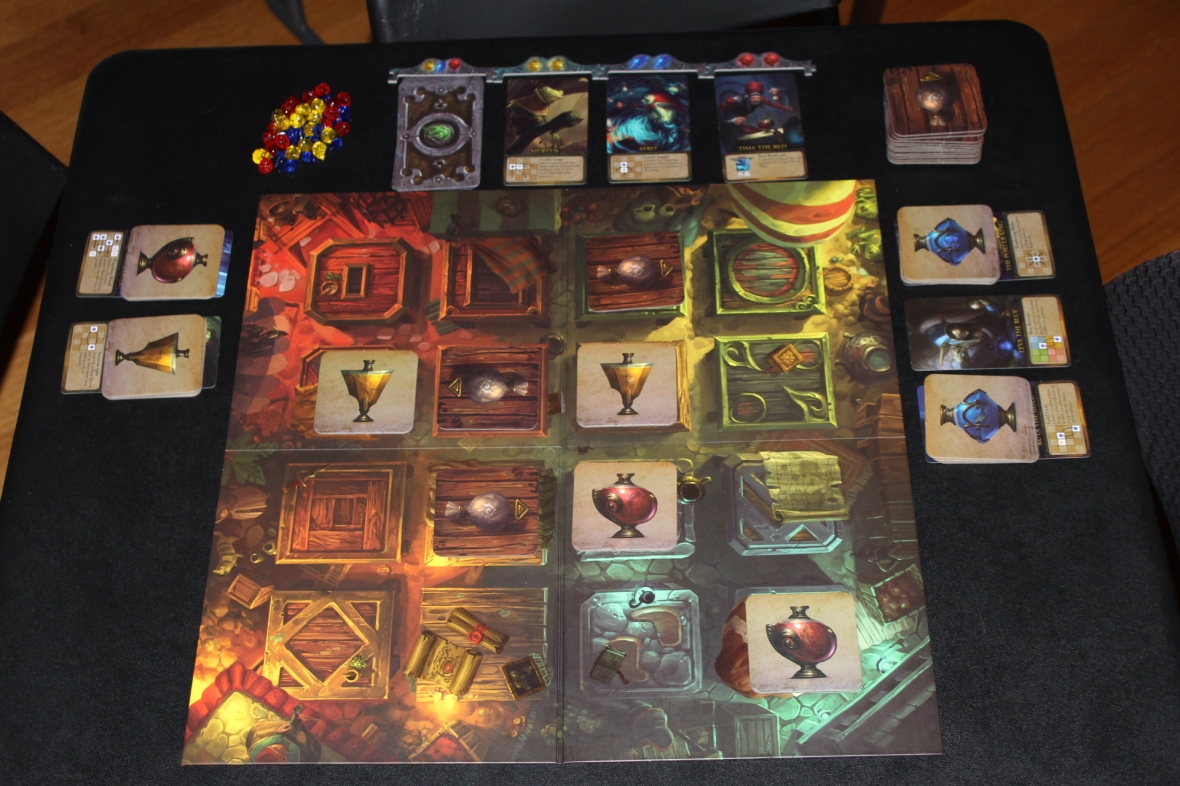 This game is a lot of fun! I think we’ve already put in … 20 plays in the month since I got it? That’s pretty frequently, and it’s deserving of it. Usually new players are down to play it at least two or three times — once to learn it and once because “well, now that I get it, I wanna try again”, which is always a great endorsement of a game. It helps that the art is super slick and the components are really nice, but it’s solid gameplay and replay value that keep me coming back for more Apotheca. I look forward to seeing what they come up with next. Maybe an expansion?