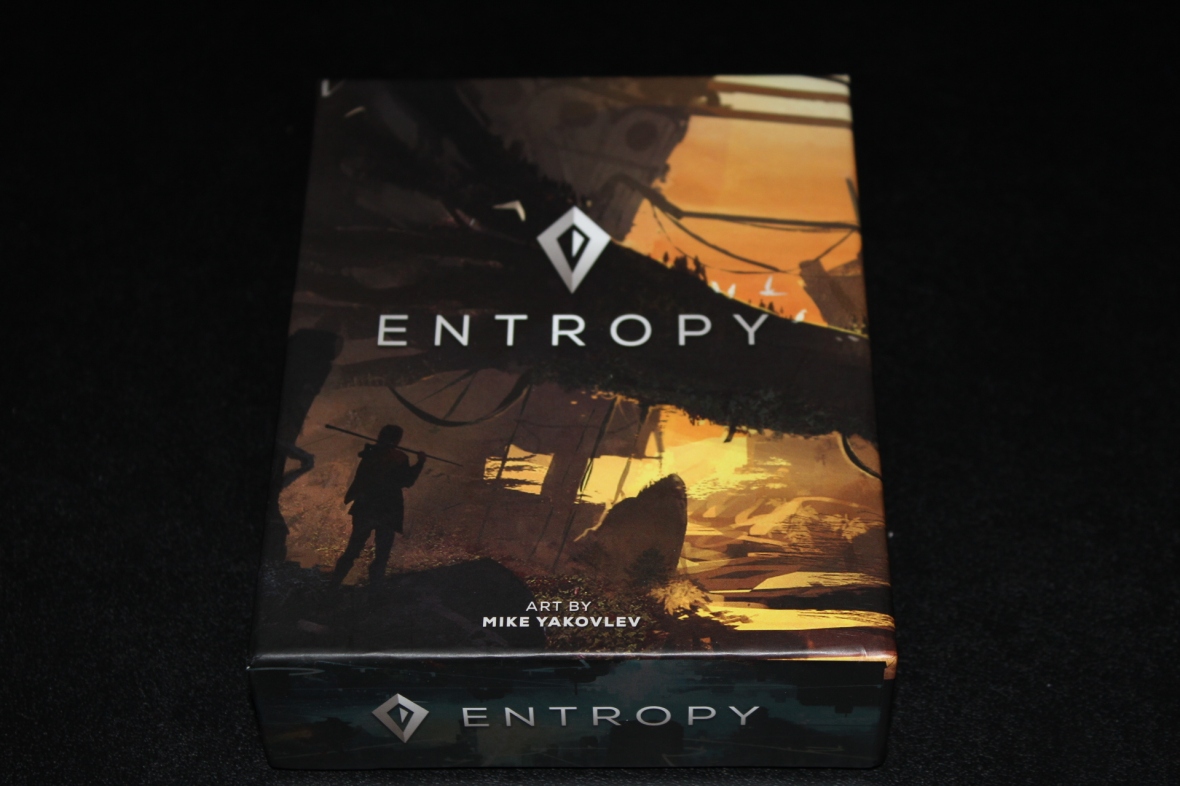 Cool, let’s talk about Entropy. Another Kickstarter card game (I do really enjoy those), Entropy is brought to you by Rule & Make, who also made Rise to Power, a cool little game about building out a power grid (no, not that Power Grid) to power the future. But that’s not what this game is about.

This game takes place after your world kind of … exploded, I guess? Collided? Smooshed? (There was a companion novella, which I should really get around to reading, but I think smooshed is the technical term.) You now find yourself stranded in between universes in a place called the Nexus, where fragments of your world are floating around waiting to be caught and reassembled. You’re not alone in your attempts to rebuild your universe, as other players are also stranded. However, only one of you gets to leave. Will you be able to restore your universe and return home, or will you remain trapped in the Nexus forever? Only one way to find out…

This is pretty easy. You’ll notice that you have five characters (not counting The Ronin, which is kind of an expansion, tbh), each with a symbol on them (see below), and a bunch of cards numbered 1-6, like so: 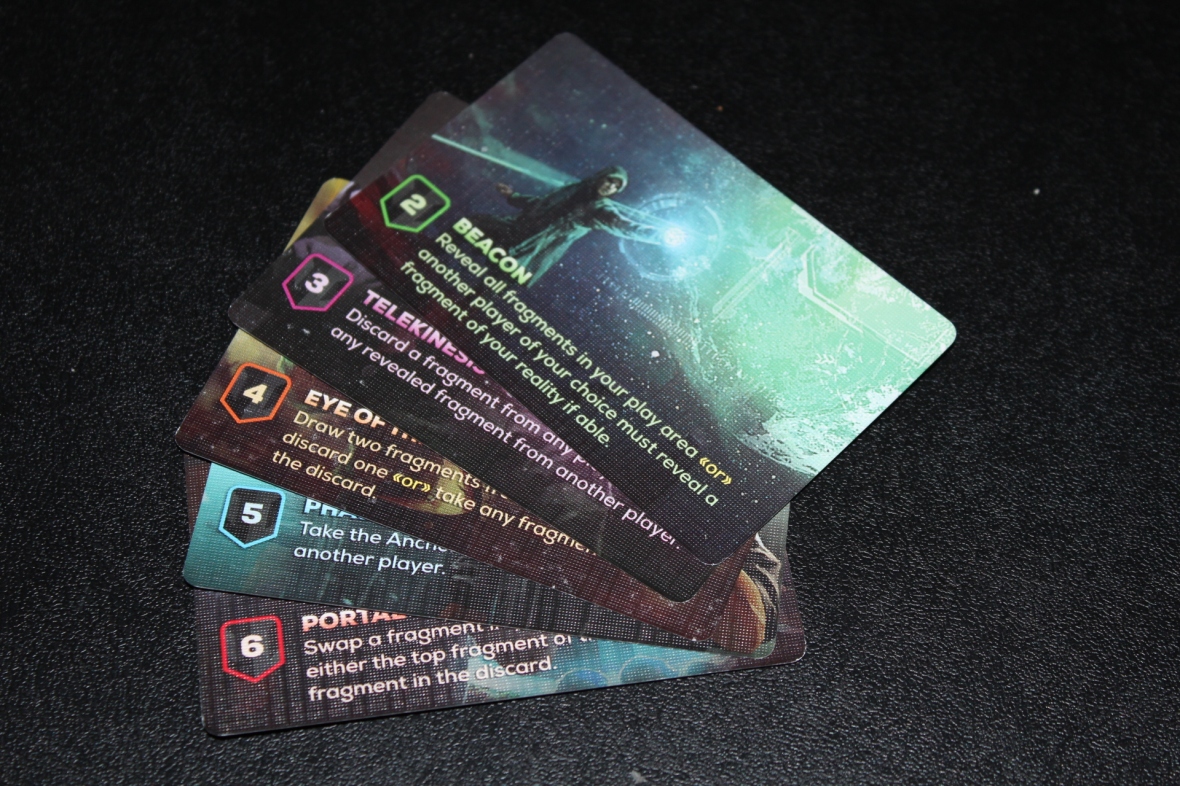 Give everyone a character and give them a set of cards 2-6 (only 2-5 if you’re playing with two players). Then give each player a 1 card matching their character’s symbol. Next, you’re going to want to shuffle the fragments of the universes matching the characters’ symbols into the Nexus, but before you do, take a minute and admire just how incredible the artwork is: 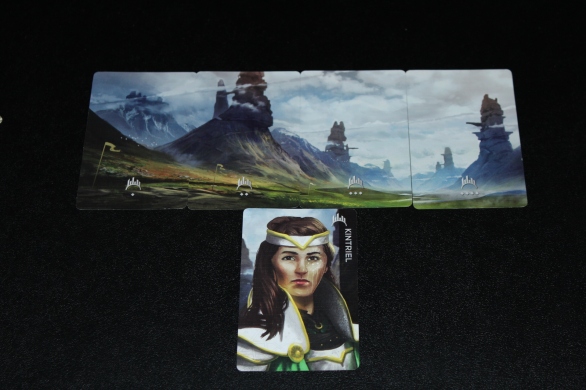 It’s phenomenal. You’ll also want to add in a few Wild Fragments, which are the fragment cards that don’t have a symbol on them.

You should also shuffle in the Vortex Fragment, which is, well, unpleasant. Also set aside the Anchor so that it’s reachable by all players, then deal each player one card face-down. Have them look at the card you just dealt them and place it to the left of their character card. Once your setup looks like this, you’re ready to begin: 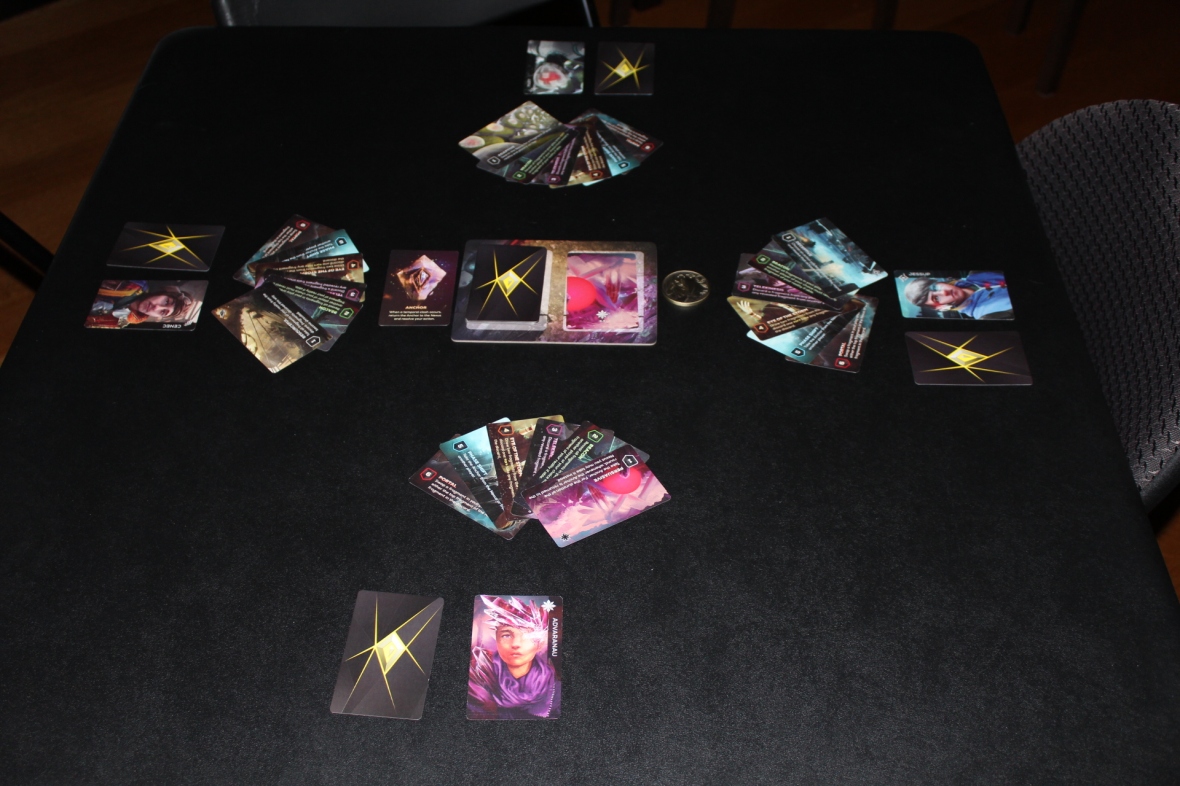 So, you want to go home, and so does everyone else. You do so by revealing and locking fragments of your reality, and once you’ve completed your reality (a four-card panorama), you can go home! Note that I’ll be using some game-specific terminology, which is outlined below:

In this game, I use shrouded to refer to cards that are face-down (as the upside-down card on the left side of my Advaranau character are). If a card is face-up (but isn’t your reality) it’s considered to be revealed, as Mary’s face-up card is on the left side of my character. Cards are considered locked when they are revealed and of your reality (as the two cards are on the right side of my card). Note that shrouded and revealed cards go on the left, whereas locked cards go on the right. For convenience (and by the rules), I also put revealed Wild Fragments on the right side, just to make counting easier so that you know when someone is getting close.

Cool. Let’s make it more difficult. Remember those action cards I mentioned earlier? They didn’t stop being a thing or anything. Aside from the 1s, there are 5 action cards available: 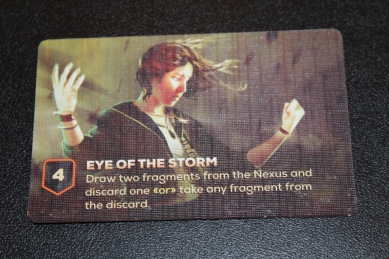 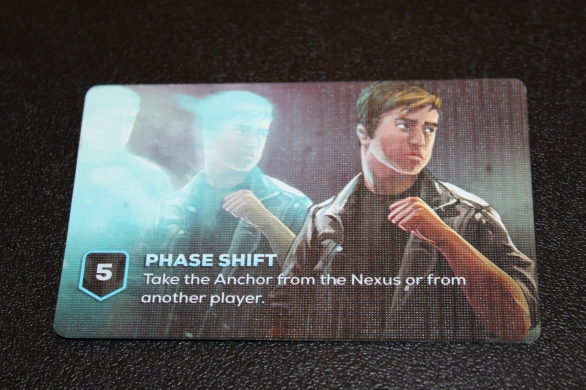 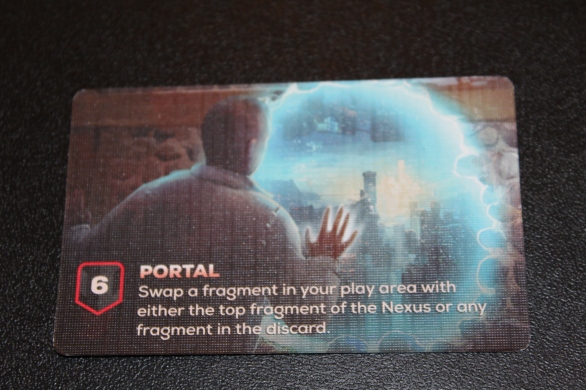 The other 1 cards let you do a variety of things, like draw cards from the deck in certain circumstances, repeat actions you’ve already taken this turn, or place one of your fragments on top of the deck. They’re neat, so I won’t spoil the surprise other than featuring them in pictures in this post.

So, on your turn, you’re going to choose and play one of these cards. However, to make things interesting, everyone will choose and play a card simultaneously. You make your choices, they make theirs. Then, reveal. (Just like 7 Wonders). However, if you played the same card as another player and you do not have the Anchor, you have a Temporal Clash! This means that you two (or more!) collide and none of you get to perform an action that turn. Sucks to suck, I’m told. However, if you have the Anchor, return the Anchor to the center. The other player(s) clash, but you do not. Handy! Player actions resolve in numerical order, so 1->6. If at any point the discard pile becomes empty, discard the top card of the Nexus deck so that the discard pile always has at least one card in it. After a turn, you do not take played action cards back into your hand. Instead, display them like so:

It’s helpful to show how you played action cards on your turn both so you can see how many Temporal Clashes you had and you can see which cards your opponents have played, showing you how what options they have. Each round consists of four of these turns. At the end of the round, shuffle the discard pile into the deck. Now, check the cards. If you have been incredibly unlucky and had three or four Temporal Clashes, you participate in what’s called Fracture Event. This means that the top three cards of the Nexus deck are flipped, and you can take one of them and lock it, if it’s your reality fragment. So say Kintriel, Jessup, and Cenec are in a fracture event and three cards are revealed, one from Kintriel’s, one from Jessup’s, and a Wild Fragment. Unlucky Cenec! Kintriel and Jessup gain fragments (and gain them locked), but Cenec does not. As you might surmise, Wild Fragments are considered to belong to nobody for a Fracture Event. Everyone then takes their action cards back into their hand and a new round begins. As far as I know, you do not return the Anchor to the Nexus between rounds. If you managed to keep it, it’s still yours. First player to fix their fractured reality wins!

This is the only card in the game that can shroud locked fragments. Handle with care. On the plus side, it lets you essentially lock your wild fragments, which is nice. This card is optional unless you’re playing with the Ronin, but I usually throw it in anyways because a little bit of chaos never hurt anyone.

The only real difference is that 2-player lacks the Portal, and 6-player forces you to include the Ronin. Personally, I’d say it’s a bit like Coup (in more ways than one) in that I prefer it at the 3-5 level, not at 2 or 6.

2 players makes it mostly about trying to out-bluff your opponent so you don’t Clash every time. At 6 players, it’s too chaotic (too many Clashes) to get much of anything done. It places a lot of importance on who can get the anchor.

I really like this game, and I honestly think a nontrivial amount of it is the art. Don’t get me wrong, it’s a cool game with a cool mechanic and it’s a lot of fun to play, but the art is just amazing. I think the backstory and theme are pretty cool as well, and it’s a game I like to show off a lot as being part of my collection. All those things considered, it’s still a really fun game to play. It’s a short, light card game with some options to play really complex mind games, since you can screw over yourself and multiple opponents if you manage to do really well. Or use the Anchor to get out effortlessly and leave them trapped picking up the pieces.