Every game I’ve reviewed until now has been competitive (or, at best, loosely cooperative), so I felt like it would be a nice time to talk about a purely cooperative game. Hanabi, another game from Antoine Bauza (the designer of 7 Wonders and the recently-reviewed Tokaido), has the players become slightly inept fireworks technicians who didn’t put their supplies away very well last time. You arrive the night of the big fireworks show to find that EVERYTHING is a mess and you really aren’t sure what goes where. The crowd demands a spectacular performance, and the show must go on. Will you rise to the challenge? Or will the whole thing go up in smoke?

This one is pretty easy. There are two sets of tokens — blue Clock tokens and black Fuse tokens. Put the tokens aside, and stack the Fuse tokens in descending order (explosion on the bottom).

I’ll explain why in Gameplay.

Remember how I said you weren’t sure what goes where? This introduces a very interesting mechanic that defines. Hanabi. You should hold the cards in your hand such that their backs face you, and their fronts face the other players.

And the other player should see this:

Make sense? This is the core of the game, here. Otherwise it would be very easy. The goal of the game is to successfully play 1-5 of each color in ascending order (starting with 1), which, given that you don’t know what cards you have, is pretty tough. Also, the other players can’t necessarily tell you exactly what’s in your hand. In order to win you have to play skillfully, and on your turn you have one of three options:

So the game either ends when the last card that can be played is played or once the deck runs out. In the latter case, the last person to draw a card gets one more turn, so every player gets an additional turn once the final card is drawn. Then you score yourself (count the highest card played of each color), by a more fanciful wording of the following categories:

I’ll leave the exact wording a surprise for those who purchase the game. Lastly, don’t cheat. You can’t look at your cards, and you can’t tell people information without using Clock tokens. You also can’t tell people what to do on their turn. Try to keep table talk to a minimum, but honestly who cares it’s just a game.

This is probably the most important part of the game, as poor strategy in a cooperative game can sink everyone.

Yeah, this seems about right for Hanabi. I like it enough that I’ll occasionally suggest it, but I personally prefer Pandemic when it comes to coop games. I think one of my favorite parts of it is just how easy it is to take places, so it usually ends up as a game in my travel pack (along with like Coup, Lost Legacy, or a slightly-trimmed-down Splendor. It’s also cheap enough that it makes a great gift for an avid gamer who is looking for a less competitive experience, so it ends up being my Secret Santa contribution pretty frequently.

However, if you find it’s a bit too easy, then perhaps you can shuffle in those rainbow cards I mentioned earlier… 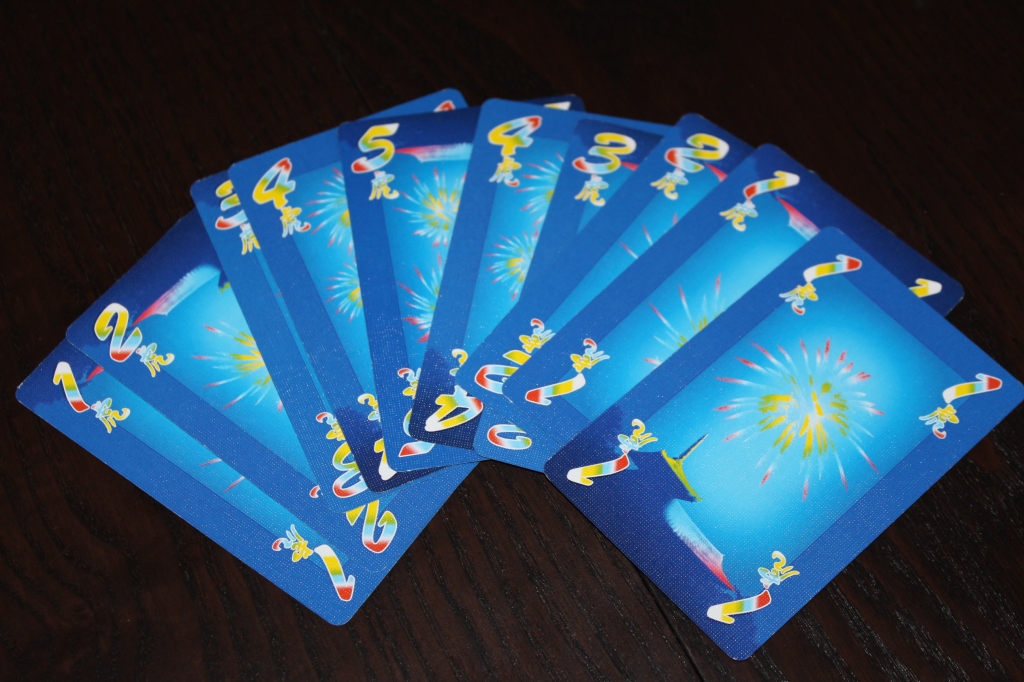 If you’d like to play the easy way, they can just be an extra suit (you have two rainbows, etc.) but if you want to make it more difficult, make them an extra suit, but they count as any color. This means that if you are letting someone know they have green cards, you have to point to the rainbow cards as well. This makes the game significantly harder, but hey, if you’ve already gotten 25, why not?