Full disclosure: A review copy of this game was provided by Ninja Star Games.

So remember how I’ve been talking about game theme for a while and how I’m a bit tired of doing the same themes over and over again? Well, prep yourselves for something totally different. We leave behind generic fantasy for a spot in the French Alps, where two pairs of shepherds are trying to keep track of their flock as they do whatever shepherds do. Unfortunately, they have a bit of a wolf problem, as wolves keep chasing their sheep into the nearby dark forest. You’ll have to use your trusty sheepdog to bring them back, provided you can get the hound to actually focus on you. Can you protect your pasture and keep your sheep locked down?

So take the center board and the four pastures out, first, along with the fences: 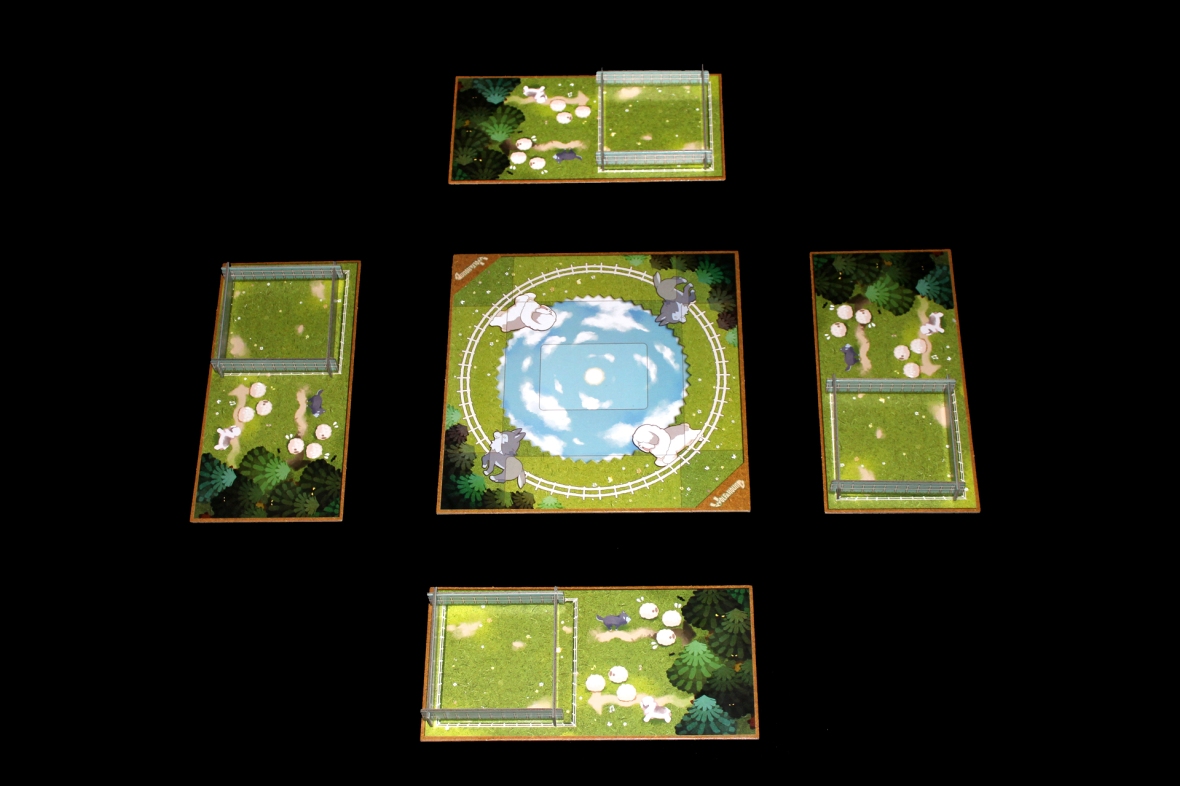 You’re going to have to build a fence around your pasture (otherwise all your sheep will run away!), but I believe you can do it, so I omitted the step-by-step. Next, take out the sheep and standees, and put three sheep in every player’s pasture (if you are playing with 4 players): 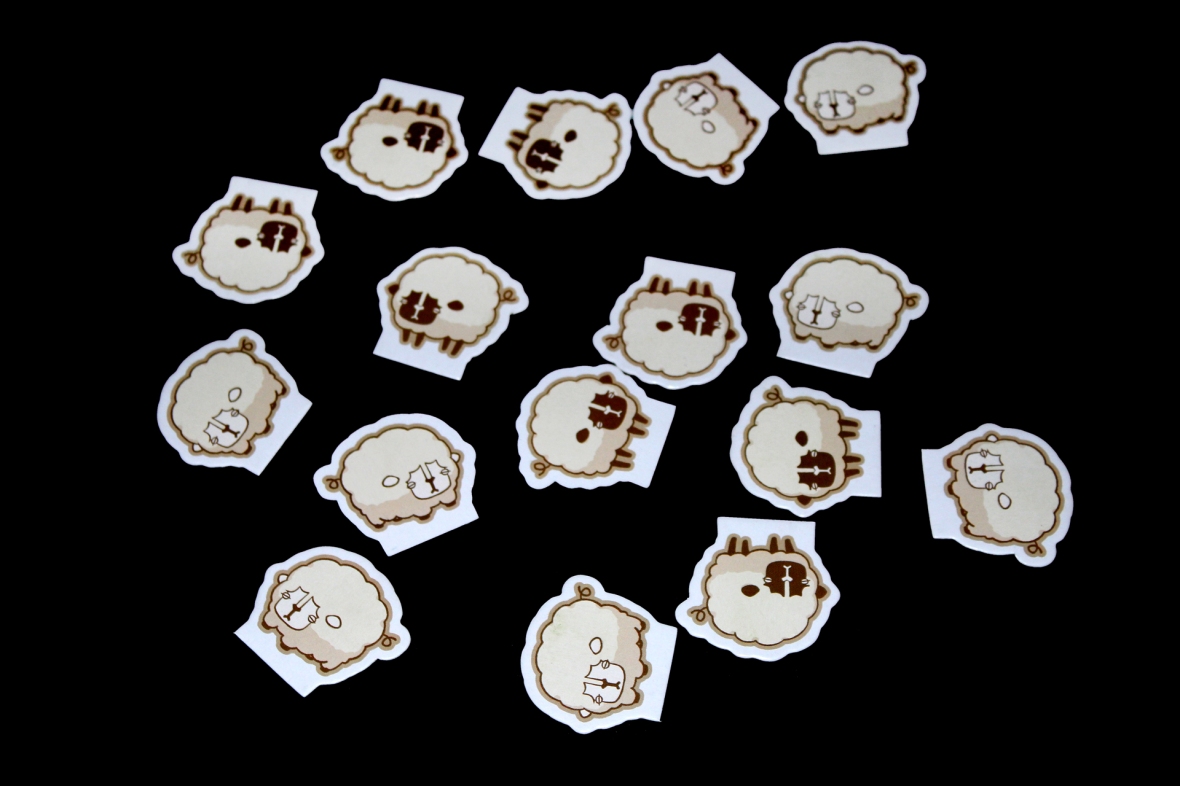 Try to stop being mesmerized by how cute the sheep are so you can set up the rest of the game. You’ll find 32 number cards: 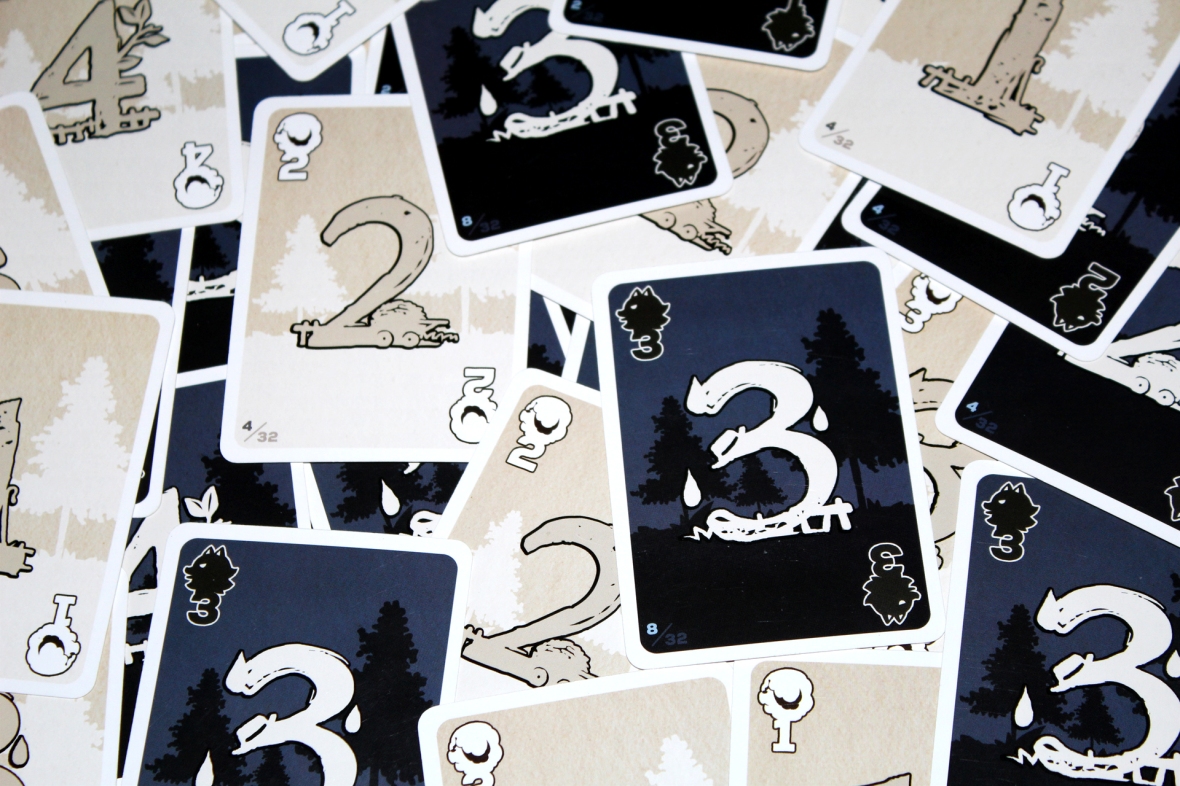 Some are black and some are white; just make sure that none of them look like this: 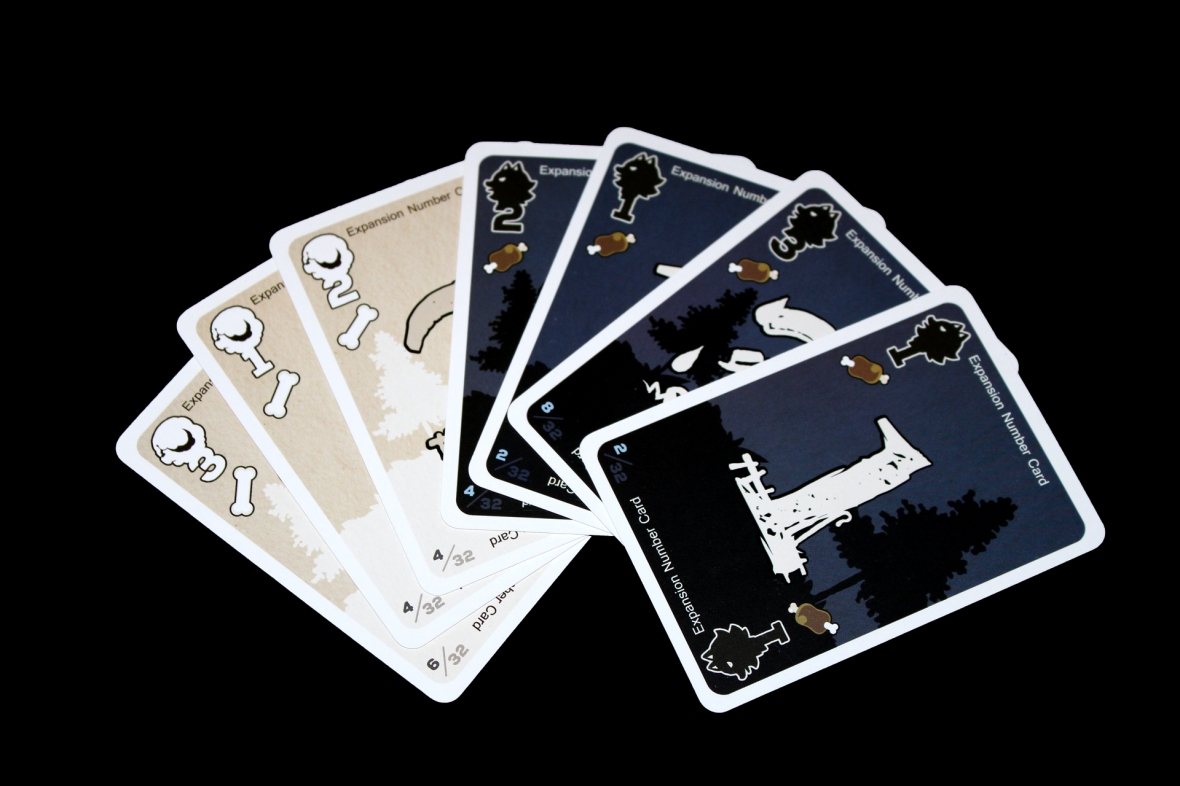 Those are for one of the (many) expansions / variants included in this game box, known as the Meat and Bone expansion. Put those cards back in the box, and shuffle the 32 number cards and deal each player 4 cards.

You’ll need to get the Shepherd cards as well:

For your first game, you’ll really want to use Wolf Card 01 and Hound Card 01 (and no Sheep Cards):

They’re rather generic, but hey, gotta learn to play sometime.

Give each player a Shepherd card so that the player order goes 1 -> 2 -> 3 ->4, clockwise, and set the Wolf and Hound in front of Player 1. Once your play area looks like this, you’re ready to begin:

Note that for games of two or three players, you have to use an alternate game setup with a Dummy player. I’ll note the gameplay differences in Gameplay, but for Setup:

All Dummy players get dealt four Number cards as well; this comprises the Dummy Deck. More on that later.

So Gameplay here is actually pretty simple, at least, with the very base game. I’ll just split it into sections for Base Game,  Dummy Players, and Advanced Play.

In the base game, you’re trying to use the Wolf to scare off your opponent’s Sheep and use the Hound to retrieve your sheep that your opponents have scared off. If at any point one team has lost all of their sheep, that team loses. So keep your sheep together.

Your turn proceeds as follows:

Play continues until the game ends. Pretty simple, no?

Honestly, the game plays pretty similarly, except that one player (or two) doesn’t get to have a teammate.

That’s about it. Still think it seems too easy? Let’s add some complications.

So this is where the game starts to get a bit weird. As you might guess from the Wolf 01 and Hound 01, there are more wolves:

There are more Hounds: 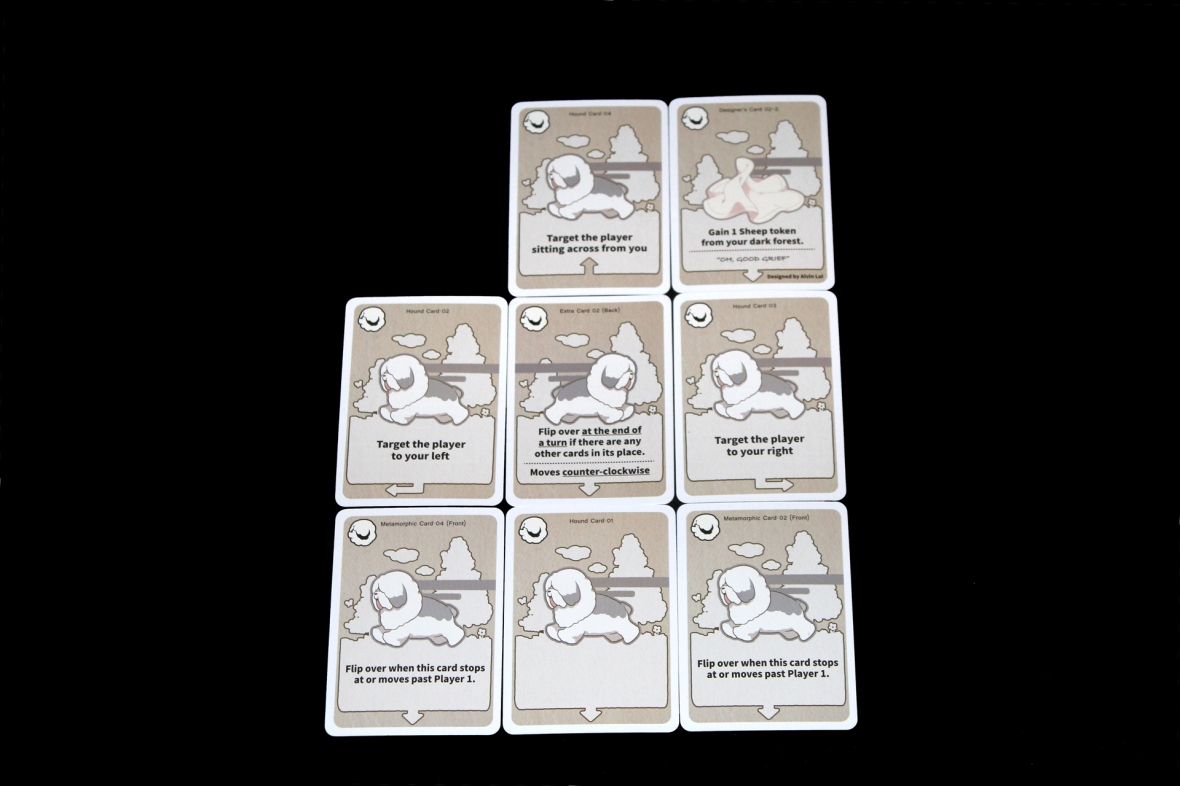 There are even Sheep Cards:

And they can get a bit crazy. Personally, I’m a huge fan of the blanket + Wolf combo (Designer’s Card 02 set). It adds in two blankets that act as a Wolf and a Hound, as well as a Wolf that wants to sleep in the blankets. If he can’t find any, he’ll move one space counterclockwise around the board each turn. If he finds a blanket, he’ll stop (and can’t be moved), but still scare away your sheep.

But wait, there’s more! There are also Sheep cards, which either prevent you from playing 3s or skip your turn. The thing is, if your turn gets skipped, then the Wolf doesn’t activate and you don’t lose any Sheep. So it might be to your advantage to get that Sheep in front of you…

There are a ton of different combinations, from a Wolf that moves 3x speed to a Hound that changes directions every so often, to a Wolf that changes to a Hound (and vice-versa!). There are even Wolves and Hounds that target players on your left or right (or both!) or even the player across from you. Mix and match to find something that works with your group.

Have a combination that you really like? Let me know in the comments. There are also a few suggested combinations in the rulebook.

Check out the stuff about dummy players, both in Setup and Gameplay. Generally, not a huge fan of dummy players, but in this case it’s nice that the option exists. I haven’t seen much play of it, but it doesn’t look to be bad (the people who have played it at that level enjoyed it, but recommend that the most experienced player play with the dummy player on their team). That said, I’d still recommend this at four.

Surprising amount of strategy, depending on what you’re playing with: 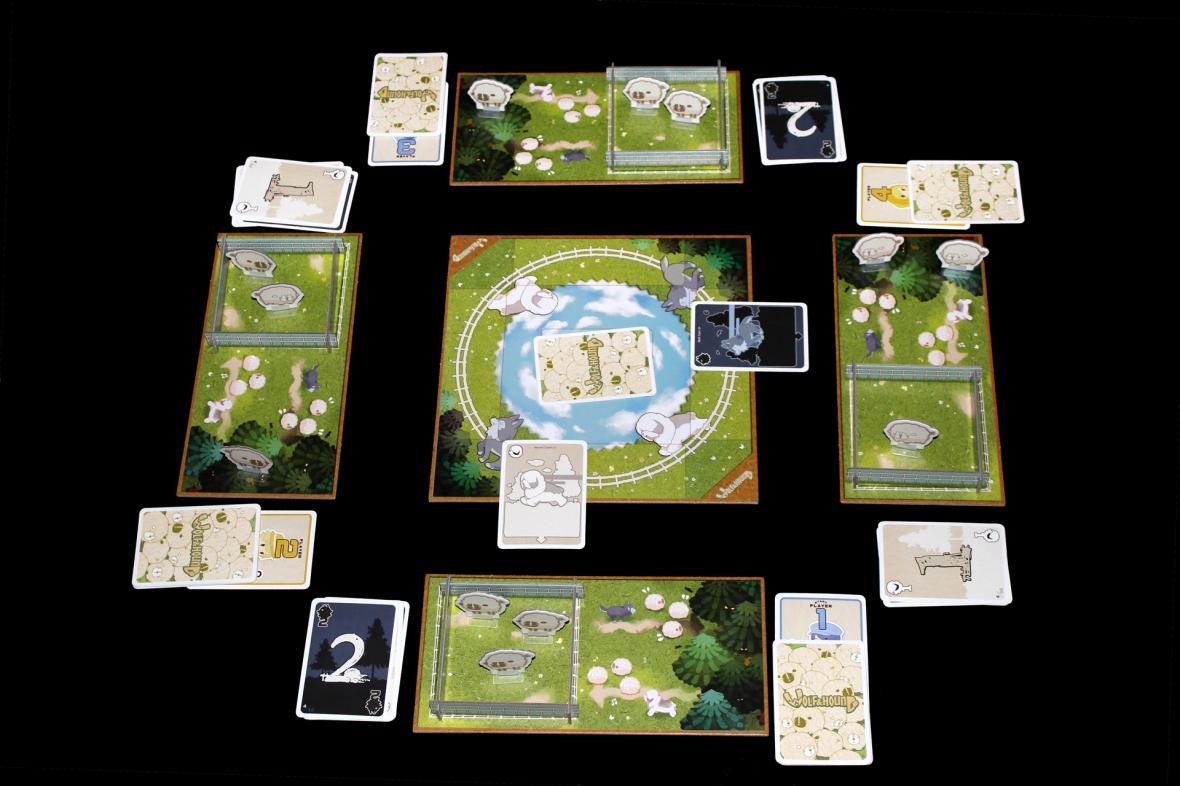 I think Wolf and Hound is a great game, even better as an intro game / family game. I think it’s simple to pick up (though the rulebook is a bit clunky at times) and easy to expand on, allowing you to scale the complexity as, say, your coplayers age up a bit. That said, even for a family game, I think it’s still got a lot of fun, interesting things for players (and there aren’t a ton of team games in my collection), so I’m actually really excited about playing it again and will sometimes even suggest it. If you’re playing with a family, though, I’d strongly recommend checking this out. 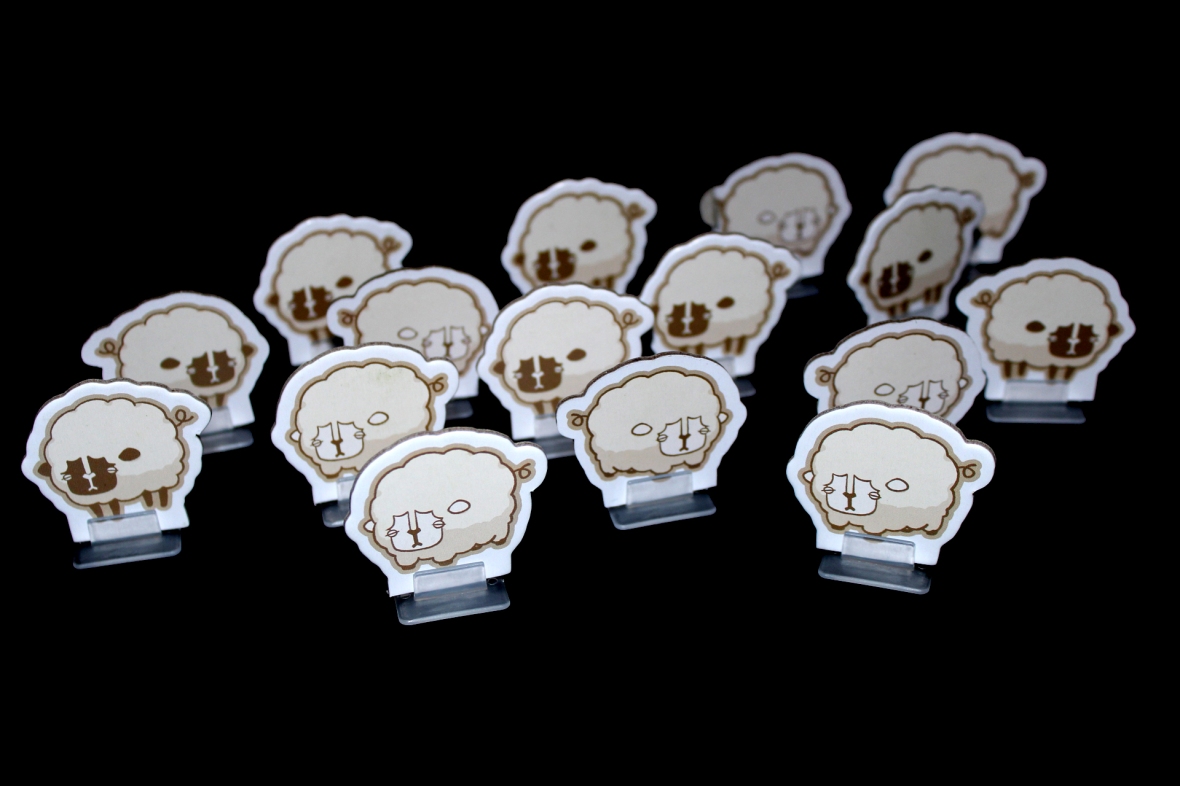 Plus, again, sheep standees. What’s not to like? It’s got as many sheep as Cake Duel.