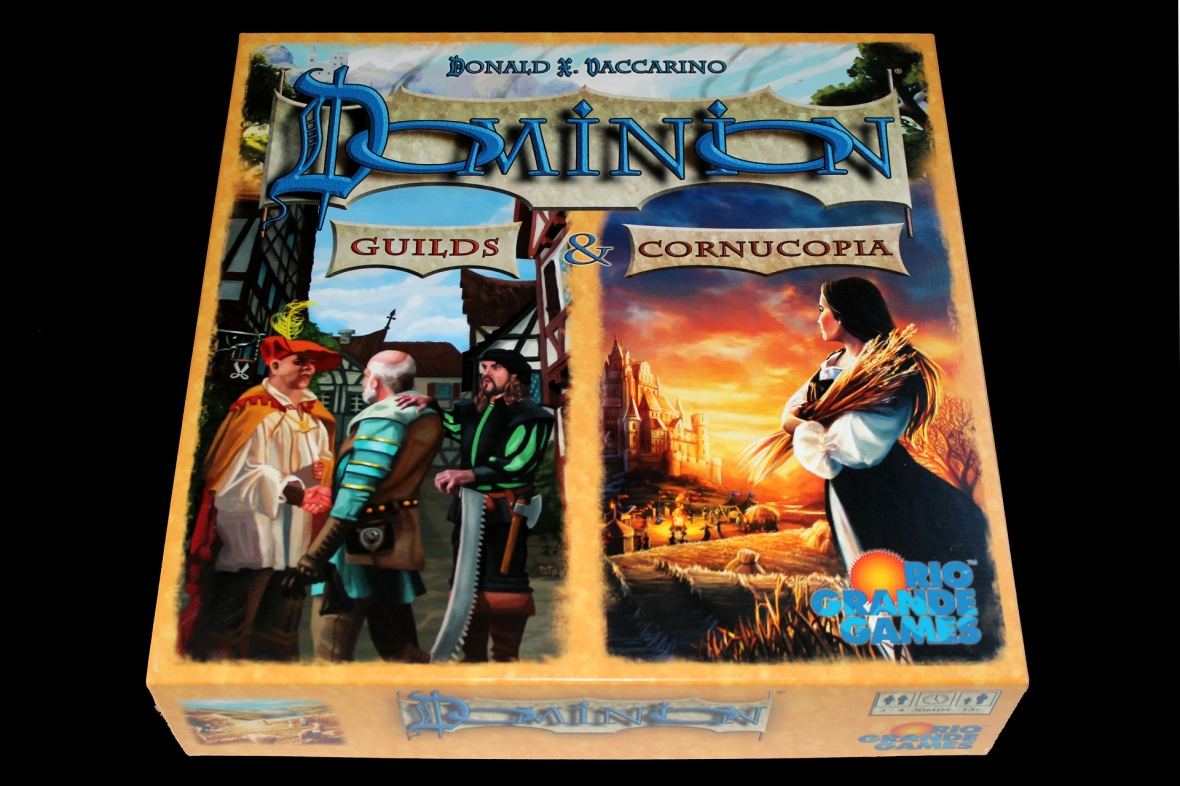 Jobs, everyone’s worried about jobs. Whatever happened to tilling the fields in obscurity? The economy is just a trick, like stealing someone’s nose, but lately people seem to have seen through it, like when you realize someone hasn’t really stolen your nose. So now everyone’s joining a guild, learning a craft, and working on a masterpiece – a painting so beautiful it blinds you, or a cheese grater so amazing that you never eat cheese again. The only people left tilling the fields are the ones doing it ironically. The guilds cover everything – ironic tilling, butchering, baking, candlestick making, shoemaking, cheesemaking, cheese destruction. Your advisor is convinced that somehow, control of the stonecutters is key to world domination. Very well. You will have stone handled so expertly that the world trembles before you.

We’re in the home stretch! (Or, we were, until Dominion + Intrigue: Second Edition came out, but I’ll probably just try to get those done as one thing later. Actually, that reminds me, Intrigue won’t be standalone moving forward — I should update that post.)  Anyways, there’s only Adventures, Empires, and Alchemy after this (and the Second Editions), which isn’t all that much. Should be exciting!

Anyways, in Dominion: Guilds, the world is starting to change. All these guilds are popping up offering people jobs and hope (which, to be fair, after Dark Ages and all those rats, shelters, and ruins, seems like a pretty good deal). Naturally, you want to get in on that action and the new sources of income these guilds can provide. Can you leverage their expertise to build a grand dominion?

You should already know this drill by heart — I’ve done it for all the Dominions. Let’s start by looking at all the new cards Guilds adds: 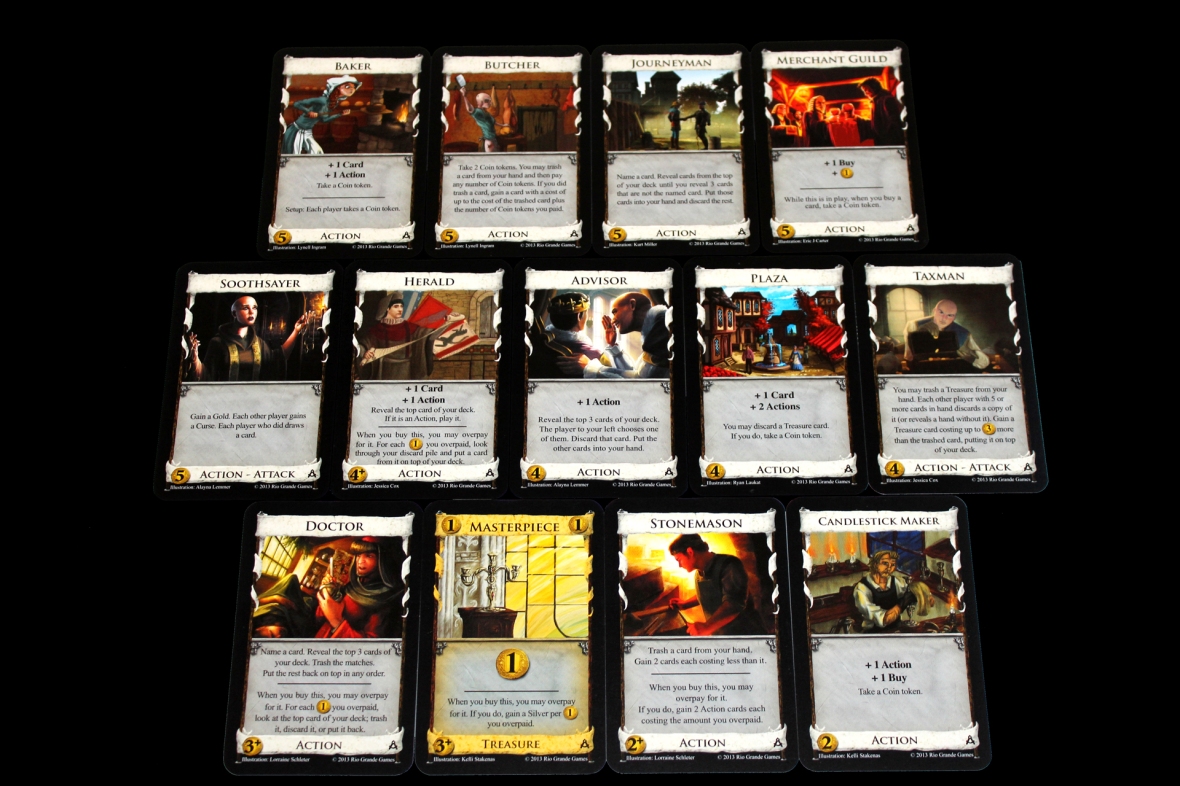 Set aside the base cards (Copper, Silver, Gold, Estate, Duchy, Province, Curse), and then set them up:

Now, handle your randomizer cards (or your trusty Randominion app or other — do you use other apps? Let me know in the comments.):

Give each player three Estates and seven Coppers, and you’re just about ready to start. The only thing missing is that if you’re playing with the Baker:

You’re going to want to give each player a coin token:

That might change up your strategy a pretty large amount, since, well, it’s extra money. Either way, we can talk about that in Gameplay. If your play area looks like this, then, well, you’re ready to start: 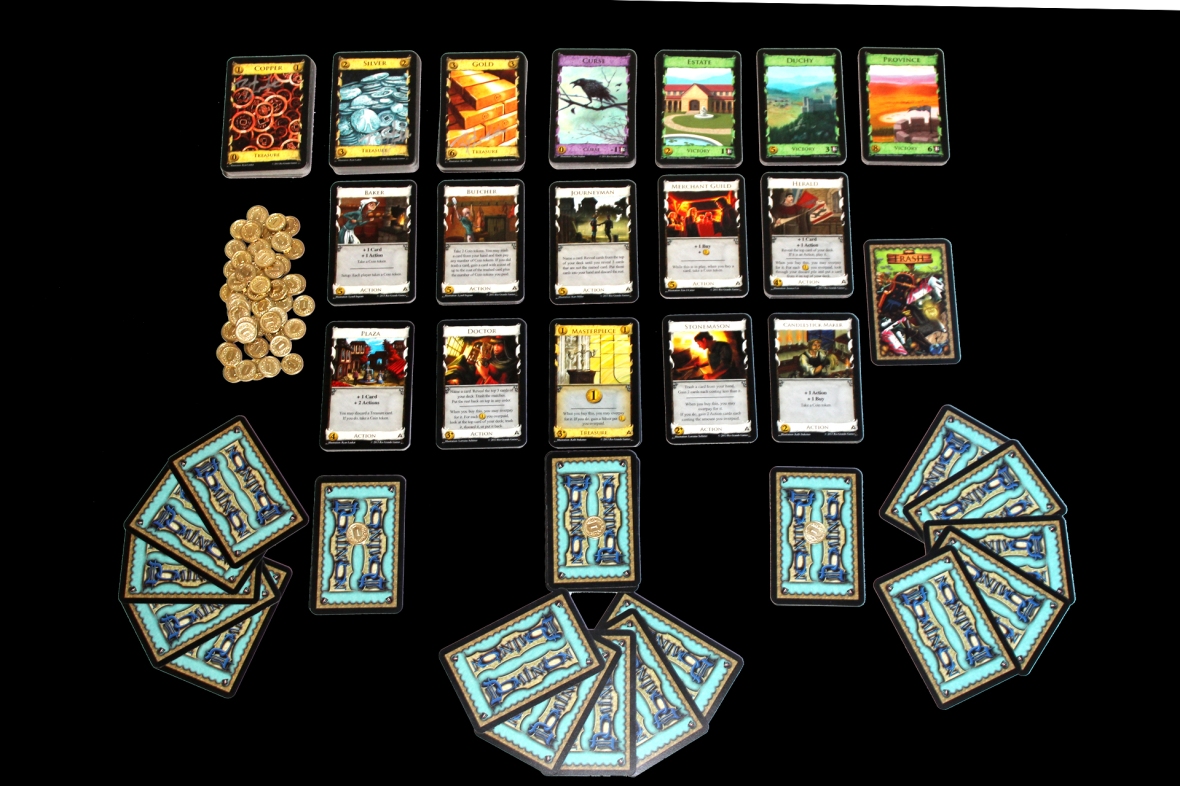 If you don’t know what a deckbuilder is, I describe it in detail in my Dominion or Dominion: Intrigue reviews. As of this point, I have to assume that you know (or now know) what a deckbuilder is, or you just want to be a bit confused. Guilds is a small expansion that focuses on only a couple things, so this won’t be a big difference from, say, Cornucopia, which is part of why I assume they’re paired instead of, say, Alchemy.

As with all expansions / instances of Dominion, your turn has two phases: the Action Phase and the Buy Phase. During the Action Phase, you can play one Action card. During the Buy Phase, you can reveal and play Treasure Cards and then buy one card from the Supply (the Kingdom cards + Treasure cards + Victory cards + Curses, if you’re trying a more golf-themed strategy), provided you can pay its cost (bottom-left number).

All cards have a title (top), a cost (bottom-left), and their type or types (bottom-center), but their effects are different, as you might imagine would be a thing in a game with hundreds of different types of cards. Generally, along with some explanatory text, Action cards will have some effects:

If you have no +Action cards, you only get to play one Action card before your Action Phase ends. Action cards that lack a +Action are generally referred to as terminal Actions, and you generally will see a reasonable number of those in every set.

After the Action Phase comes your Buy Phase, in which you play Treasure cards to accumulate money, and then spend that money on cards from the Supply. Treasure cards can be Masterpiece (value 1), Copper (value 1), Silver (value 2), or Gold (value 3), and you should also count +Coins you got during the Action Phase. If you have earned Coin Tokens from cards, you can also spend them here to gain a +1 to your money per Coin Token you spend. As usual, unless you got +Buys in the Action Phase, you can only buy one card.

Here’s the interesting thing about Guilds, though — it introduces a concept called overpaying, which you’ll see on some cards:

See that X+ on the price? It means you are totally allowed to pay more than the stated amount, and if you do, you might get some sort of bonus. For Masterpiece, for instance, you gain a Silver per money you overpay, meaning if you pay 10 for a Masterpiece, you also gain 7 Silvers, which hey might be useful to you. Note that overpaying doesn’t affect the cost or value of the card — you can’t trash a Masterpiece you spent 7 on and gain a card costing up to 9 with whatever cards let you do that sort of thing, since Masterpiece costs 3. The + is just a reminder that you can overpay for it.

Now, the Clean-Up Phase. As mentioned previously, discard everything except unused Coin Tokens (actions, treasures, etc.) in front of you from play and discard any cards left in your hand, and then the next player takes their turn and so on / so forth until the game ends. Which, is:

Note that the second case includes Coppers, Silvers, Golds, Curses, Duchies, and Estates, as well as the normal Kingdom cards. Now, count how many Victory points you have among your cards, and whoever has the most points wins!

For Guilds specifically, there don’t seem to be any cards that would be different in games with multiple players, in my opinion. So, not a whole lot to say here. I guess it might be worse to have more players playing Soothsayers and hitting you with Curses in between your turns, especially since this set has no Reaction?

Either way, check in with me again for Adventures?

Naturally, I have a bit more to say here, so I’ll do what I can.

I mean, when one of your major complaints is that you wish there had been more cards with this theme, that generally means you’re a pretty big fan of the expansion, and I am. I generally try to throw Baker into other games to see how it changes the game, as well as a few of the other Guilds cards that I regularly use when combining sets. I wouldn’t call this super impactful since it’s a smaller expansion (and unlike Alchemy it doesn’t include cards like Possession), but I enjoy it. I’d recommend picking up the Guilds / Cornucopia pack to get both, since I like both a lot, but that’s your call. Either way, a great theme and some fun flavor make Guilds a fantastic little expansion.