So, science is cool. The Magic School Bus is coming back, Bill Nye is getting another show, I think they’re doing something with Mythbusters, and so on. What better way to pay respect to science than playing a science game? In Evolution: Climate, you can do just that, by using pure science to evolve species to get food and such. Over the course of the game, you’ll have to deal with crowds at the watering hole, angry carnivores, and even a malicious climate if you want to survive and get the most food as a species. Can you survive?

Now this is a game with a bit of setup, as opposed to my usual low-setup games. The first thing you’ll notice is the Climate Board: 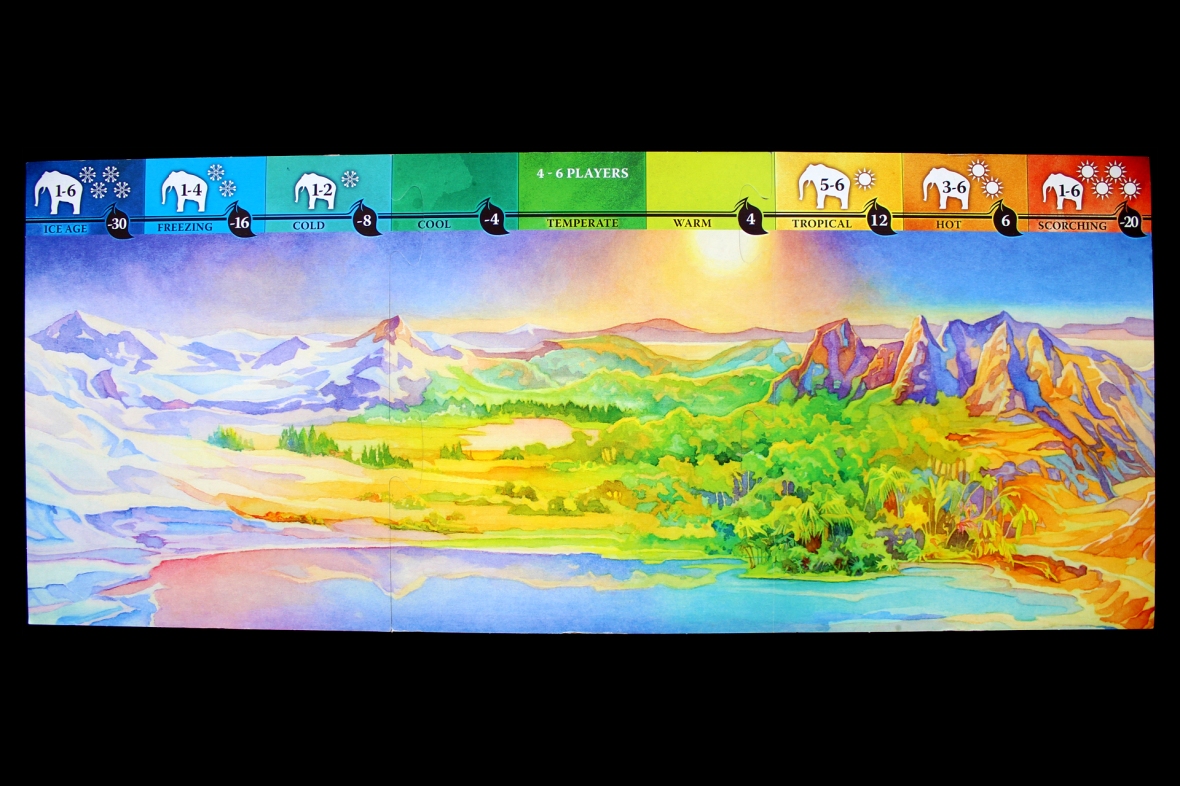 Set it in view of all players with the correct side up for the number of players you have. Next, there are a bunch of bags — give every player one.

Those will be important, but you won’t generally use the entire deck. Here’s what you do:

Next up are Climate cards:

Give the player of your choice this, the delightful First Player Marker:

Seriously though how great is this guy

And once you’ve done all that, you should be about ready to start:

A game of Evolution: Climate is played over several rounds, with the winner at the end being whatever player can amass the most food (and survive as a species or set of species the best). I’ll go over what happens in each round in order.

Then, deal each player 4 cards, along with one extra card for every Species Board they have in front of them. So if you’re running 8 separate species (good luck with that), you’d get 12 cards. If there are no cards left, this starts the final round of the game. If you set aside cards (2-4 player games), use those as the draw deck. If not, shuffle the discard pile and use that as the draw deck for the last round.

Each player now selects a card from their hand and places it face-down into the Watering Hole. This is used to determine not only the Food for the round, but also the Climate shift. This is done by looking at the card:

These are some promotional Trait cards; figured it’d be fun to show some of these.

Now, starting with the round’s First Player, each player may play as many Trait Cards as they want. You can use them for a variety of things, provided you follow the requisite rules:

Once you’ve done all that you may discard as many Trait Cards as you like to draw new ones, but you cannot play those new Trait Cards until the next round, so it seems slightly less useful unless you’re trying to hasten the end of the game, which is totally your business.

If you would like, there is a Quick Play variant (mandatory for six players for so many reasons) in which all players play this phase at the same time. I’ll talk in Strategy about why you might not be super jazzed to do that.

After all players have completed Phase 3 in turn order, reveal all played Trait Cards and resolve any “Before the Food Cards are revealed” effects.

So, now, reveal the Food Cards. This will trigger a few things:

Once you’ve done all that, it’s time for feeding.

Starting with the first player, each player must feed a hungry species (a species that has fewer food on its Species board than its Population) if possible. You can choose which species among yours feeds on your turn.

Feeding non-carnivores is easy, since you just take one Plant Food from the Watering Hole. If they have Foraging, you’d take two, sure, but usually you just take one. You cannot (normally) take more food than you have Population, so if you were to take too much, you return the excess Plant Food to wherever you were taking it from.

Feeding carnivores is more complicated. See, carnivores can only eat Meat Food (as opposed to non-carnivores, which usually only eat Plant Food but can eat Meat Food in certain circumstances, such as via the Cooperation or Scavenger abilities), so you need to attack another species. There are some caveats:

If you successfully attack, you reduce their Population by one. If they’ve already fed the species to that Population level, they place the food in their Food Bag (so they get to keep the points they’ve already earned). You then gain Meat Food equal to that species’ Body Size. So if you manage to attack a 6 Body Size species (usually by using Traits), you would get 6 Meat Food from the Supply (not the Watering Hole). If their Population goes to 0, then they go extinct. As I mentioned earlier, they discard their Species Board and all their Trait Cards for the extinct species, and then they draw a new Trait Card for every Trait their recently-departed species had.

Once you’ve finished all that up, do the following:

Continue until the game ends! At game end, you earn points as follows:

Player with the most points wins!

As someone who drew literally 7 Carnivore cards in one game, I’d say the major difference in player counts is that more cards are in play rather than being limited to the cards you haven’t removed from the game. Does this have a real impact? Mathematically, not really, but it makes me feel better.

I’d say that the major difference is that at larger player counts you have less of an idea what the food / climate situation will look like each round. Sure, you played 4 Sun Icons on your card, but all five other players played 2 Snow Icons so it’s getting colder. Yes, you played a 7 Heavy Fur as your Food Card, but everyone else played 0s so there’s only 7 Food at the Watering Hole.

Other than that, it plays pretty well at every player count. Remember that at two players you can only have three Trait Cards per species, and at six players everyone must play their Trait Cards / handle Population, Body Size, and new species simultaneously. The latter is just so that the game moves at about the same pace.

I would say that Evolution is great at any player count, though I imagine you’d worry a lot less about one player playing a Carnivore than you might about 5+.

Lots of fun strategies for this game. I’ll outline a few I enjoy, but if you’ve got any favorite combinations, lemme know in the comments! 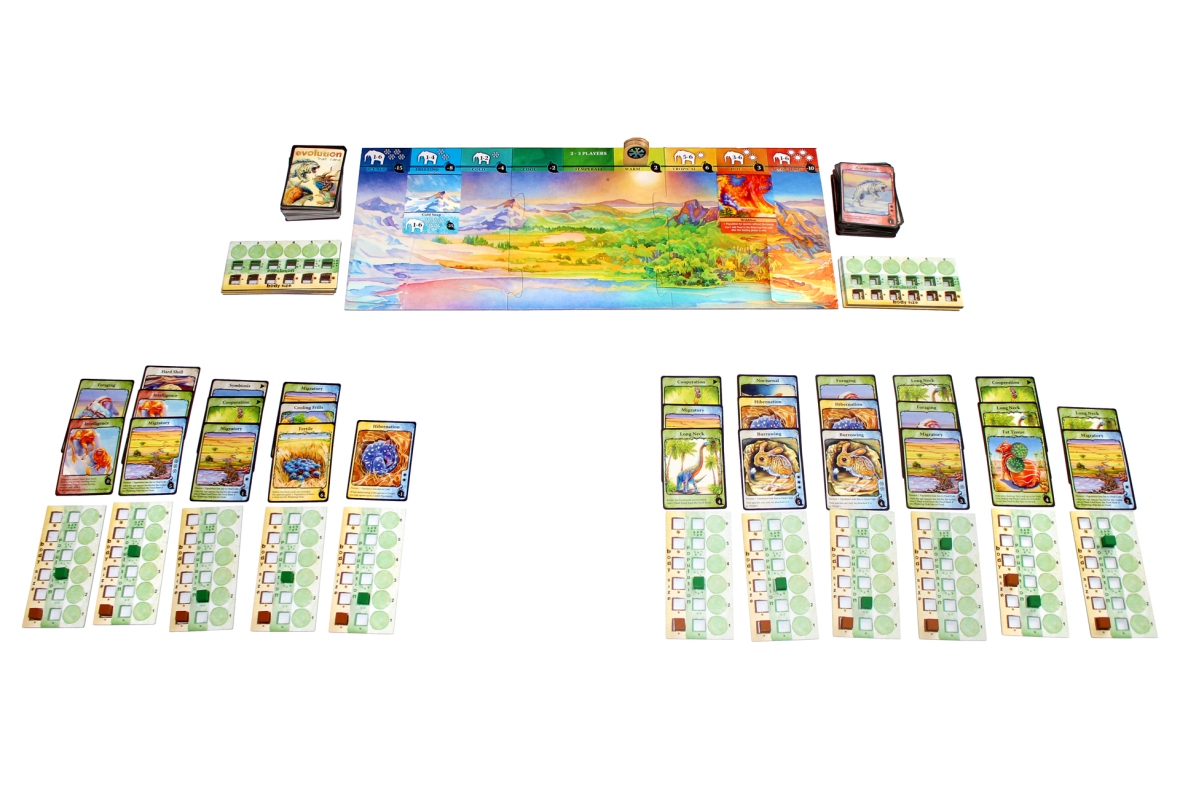 Overall, Evolution: Climate is a triumph, in my opinion. It is a meaty (for me, at least, but for others it might be planty?) game with great art, fun and engaging gameplay, and player interaction that doesn’t always feel like someone’s specifically gunning for you. It’s also a game that’s full of great content and has a ton of replay value as you endeavor each game to try different strategies and survive in a variety of unique conditions. Add in a theme that’s interesting and engaging for just about everyone (who doesn’t want to build their own unique animal species?), and you’ve got a recipe for a huge success. I’d recommend Evolution: Climate to most everyone; it really is, I think, an excellent game.