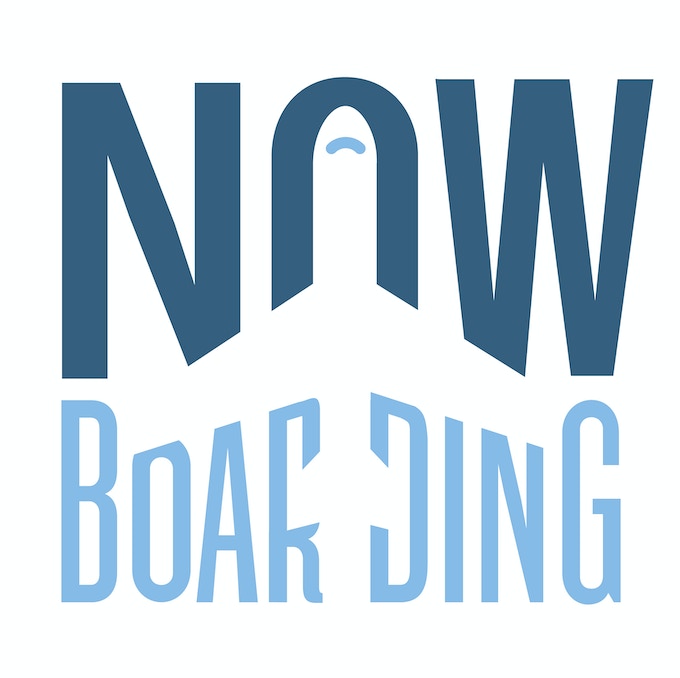 Borrowed from the Kickstarter Page until I can get an actual box photo. I don’t even have a box, right now.

Full disclosure: A preview copy of Now Boarding was provided by Fowers Games. Please keep in mind that some aspects of the game may change (as in art and gameplay), as this is a preview of an unreleased game.

I don’t really have a good plane joke to lead in with, but that’s what happens when you’re sick for a week and yet writing a preview at 1AM. Oh well.

I’m excited to be able to get a chance to talk about another game from Fowers Games, the studio behind a few of my favorite games (Paperback, Burgle Bros., others) as well as some upcoming games I’m really excited about playing more of (Hardback and the recent release Fugitive). Now Boarding puts you and your fellow players cooperatively in charge of an airline managing flights across the US. Sure, you might only be able to fit one person on each plane, but you’re not going to let that stop you. Will you be able to manage the influx of passengers on cross-country adventures? Or are you going to get grounded permanently?

The game doesn’t take too long to set up. In the actual release copy, you’ll have a double-sided board (one 2- and 3-player side, one 4- and 5-player side):

Use whichever side you need for your player count. If you’re not sure which is which, the smaller player count side doesn’t have SEA (Seattle) on it.

Now, each player should pick a plane in their color, and take a starting card with that color Special Route on it:

Put the plane on the city where the two Special Routes in that color meet:

Also set out the Upgrade cards:

Give each player a Permanent Upgrade. They can choose whether it should be a speed boost (they can move farther each turn) or an extra seat (they can carry more passengers). As the game progresses, you can buy upgrades / temporary boosts, but these are a permanent starting bonus. You can also buy additional Special Route accesses! On that subject, if you’re playing a two-player game, give each player an extra Special Route access of their choice.

Next, you’ll want to shuffle your Passenger cards:

First, deal everyone a passenger that will start in their home airport. Now, create three piles — morning, afternoon, and evening:

Set those piles aside, for now. You’ll use them later in the game.

Next up is weather! You’ll notice there are two types of chits — good weather (tailwind) or bad weather (storms):

Those chits make it easier (good weather) or more difficult (bad weather) to get to or from a destination, as they add or remove steps. Create weather piles based on your player count:

Reveal the morning weather, and set the chits appropriately. You can put them anywhere you want along the route indicated by the Weather Cards, which are just cards with a route that you should place the weather on.

Now Boarding takes place over three rounds, each composed of a series of turns. The fun thing about the game is that all players take their turns simultaneously, and thankfully, to help prevent stress, you’re on a short timer. Wait, maybe that creates stress. Oh well.

Either way, at the beginning of each turn you’ll add people to the cities corresponding to the backs of the Passenger cards in that round’s stack. You add different numbers of people for different rounds and different player counts:

By later rounds, that’s a lot of people. Now that you’ve done that, you can buy any permanent or temporary upgrades that you can afford, provided you have money. (You will not have any money at the start of the first round — setting up a new airline is expensive). Also note that you don’t get change from these transactions, so you will want to get temporary upgrades so that you don’t waste money. Once you’ve done that, you can start planning.

During the planning step, all players can freely discuss how best to use their moves and seats to get passengers from one location to another. While turns must be taken simultaneously, you can wait on your turn for a player to arrive in the same airport as you in order to transfer passengers, should that be more expedient. Just remember that you don’t know what is on the face-down cards, so that might cause you to adjust your plans. At higher player counts, it may not be a bad idea to only allow a timer flip or two for the planning step, as it might get out of hand, otherwise.

Once everyone is satisfied with the plan, flip all face-down passengers and start! When you start moving, you can move one space for every engine you have (yup, you just strap extra engines to your plane when you want to move faster) and you can hold one passenger for every seat you have. When you pick up a passenger, you discard all of their Anger Cubes (they love being on airplanes). If you successfully drop off a passenger at their desired destination, you gain their ticket price as money that you can spend for upgrades. You may, however, drop passengers off at any airport that isn’t their origin (they notice that you put them on a plane and went nowhere). Note that only the plane that drops off the passengers gets the money, so try to make sure that everyone’s making some money.

The round ends when the timer runs out (give or take; this is a cooperative game, after all). You now move into the maintenance phase. During this phase, you put one of the red Anger Cubes on passengers currently in an airport. If any passenger has four Anger Cubes on them, you discard them from the game as a Complaint (they take a train instead and that’s an entirely different board game). If you ever have four Complaints, you lose! People take complaints very seriously. If you haven’t lost, begin the next turn.

Once you’ve depleted a stack of passengers, start the next round by placing new Weather, if needed.

If you make it through all the passenger stacks, it’s almost closing time! You may take one more turn in which no new passengers appear, but every remaining passenger on the board and in your planes count as half of a complaint. If you survive all that, you win!

That said, if you’re looking for an added challenge, there are also VIP cards:

You shuffle these up and use certain amounts per player count:

These VIPs add special effects to passengers, limiting their movement or preventing you from doing certain things with them on your plane. They only appear at certain times of day, so put them in stacks behind the corresponding passenger stacks. If you’re feeling particularly brave during a turn, you can request a VIP and it’ll get added to the last passenger added to the board. Be careful, though: if you don’t complete the VIP cards for a round before the round ends, each one you failed to complete counts as a Complaint. Good luck!

Honestly, the major differences at higher player counts are going to be the larger board and increase in passengers, but it also offers a lot more opportunities for synergy / scoring money, as you’ll likely be able to juggle more passengers along your shortcut Special Routes.

I really like the hectic / frenetic nature of this game at four players; that’s where I have the most fun with it. There’s a TON of weather, a ton of passengers, and so much happening all at once. If you want to turn up the heat, just add a timer to the planning phase! Now it’s a whole additional thing. At two, it’s still a lot of fun, but I tend to prefer it at higher player counts because of the extra heat.

Overall, Now Boarding is another great game from Fowers Games! As I mentioned, I think it’s a super engaging real-time co-op, and I think it’s a solid way to start up a game night. The places where it really shines are at the higher ends of the player count, which is always interesting to me because that tends to be where I like games less, as I generally prefer games at two players. It’s nice to have a game that subverts that, which is another point in its favor. For me, it’s a nice way to pull the Ticket to Ride crowd over into other games, since it’ll mesh a bit with the nice path-based / transportation-based game they’re familiar with but might be a nice warm-up for other real-time games, like Captain Sonar. I’m pretty excited to see how the Kickstarter goes (especially with stretch goals), and I’d recommend giving Now Boarding a whirl!