Continuing on from Purrrlock, I’m taking a look at the first game in the Daemon Trilogy, Subrosa, from IDW Games. This is apparently part of a larger, 60-90 minute game trilogy that can be played individually or back-to-back-to-back. As you might imagine, this intrigued me, so here we are.

In Subrosa, you play as feuding nobles hiring mercenaries to complete contracts that are definitely, unequivocally, 100% above-board and are for-sure not murders. Never murders. Along the way, you’ll have to sway factions to join your side and take down your opponents with your superior numbers. Can you trick your friends into conflict? Or will your next subversion be your last?

So, what you’ll probably notice first is that there are a bunch of cards. There are two types — one is Crew Members:

The other is Contracts:

Setup is a bit complicated, as you use preset decks of crew members for certain player counts. In order to save yourself some time, it’s probably easiest if you organize all the cards by color (and name) and then sort them according to this recommended setup:

You can also just make your own sets, if you want. I’m a review, not a cop.

For the contracts, just shuffle them and deal each player 3. Each player must keep at least one, but may discard more. Once you’ve done that, deal all the Crew Member cards equally to each player, and choose a player randomly to go first, giving them the Initiative Token: 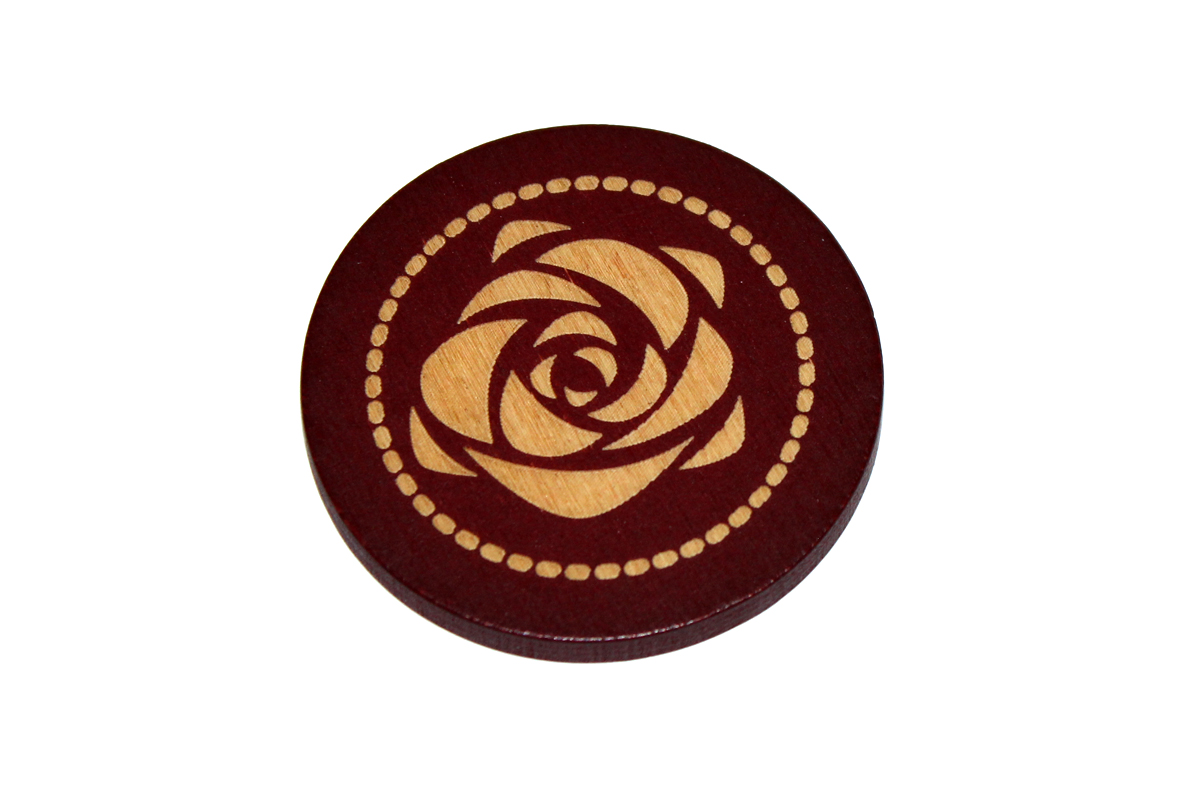 Once you’ve done that, you should be all ready to start! 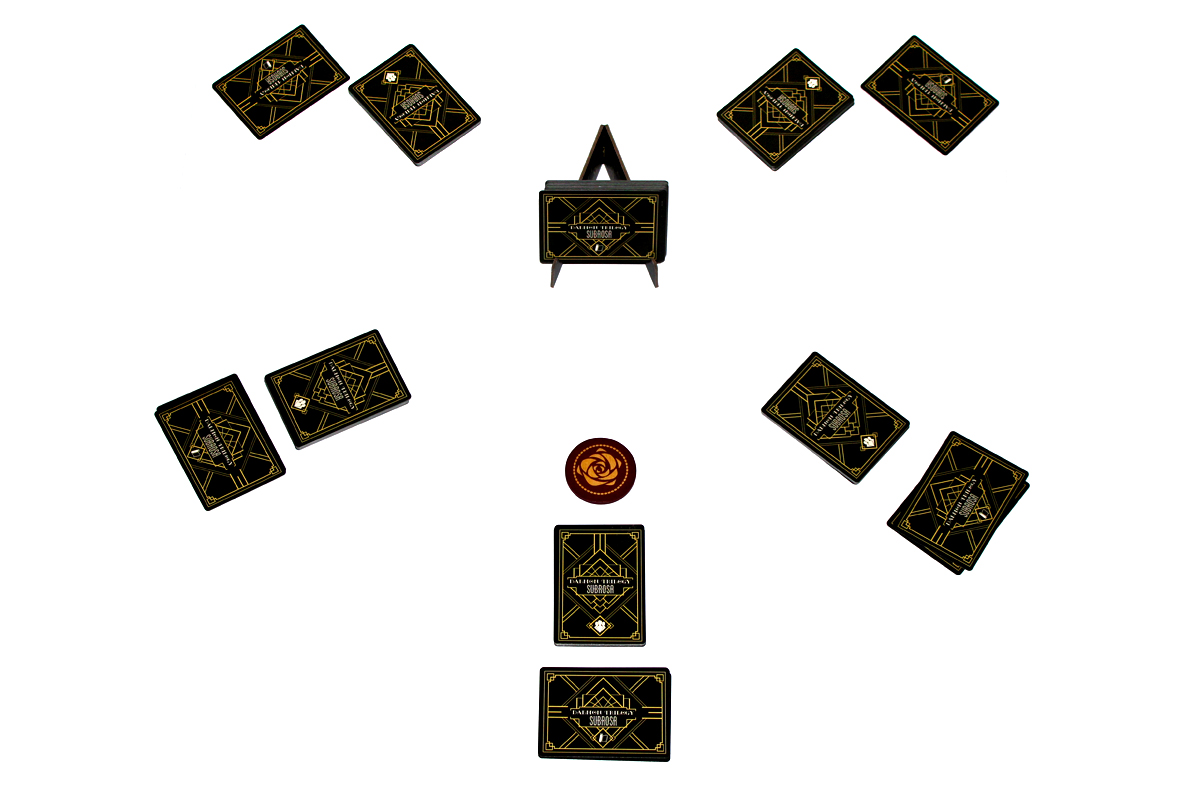 Gameplay is fairly straightforward. Subrosa is played over a series of rounds, with each round having a few phases. I’ll outline those parts as follows:

During the Recruit Step, you’ll pick two cards from your hand and add them to your Crew, which is a row of face-down (sometimes face-up, if revealed via a card effect) cards in front of you. Your Crew is what enables you to complete Contracts, but more on that later. When you do, you may choose one of the following actions:

Once everyone has chosen an action, reveal all face-down Crew Members.

Starting with the player with the Initiative Token, resolve all Crew Member effects in turn order. Some Crew Members may wound a Crew Member of yours or another player’s; if they do, move the wounded Crew Member to a pile in the center. If that was your active Crew Member (the one you chose to do its action this round), you may still resolve the Crew Member’s action. It just means you don’t currently have the ability to use it anymore.

There are 5 Factions, each with their own general set of abilities:

Knights: This Faction is mostly about wounds. They deal wounds to other players (and sometimes you), and they’re generally not nice. Great if you enjoy a more heavy take-that approach to games. 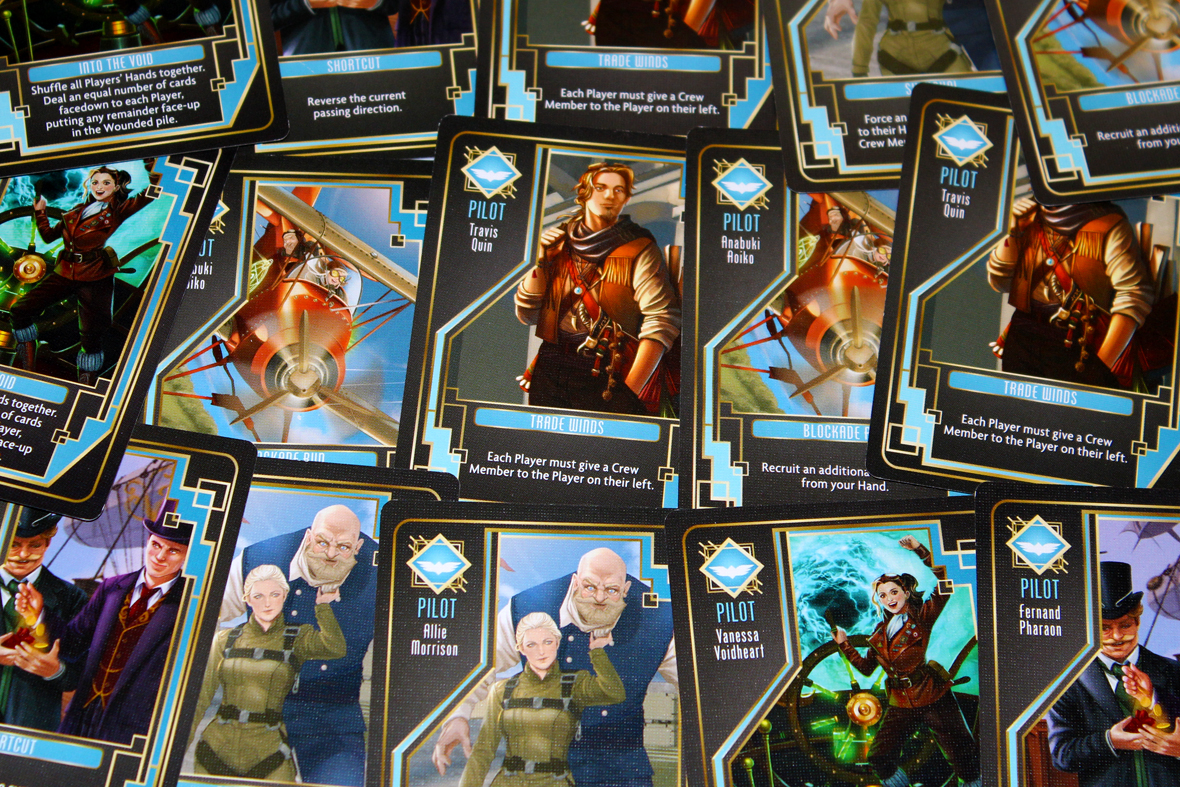 Pilots: They are kind of the “movement” Faction. They let you move things around (passing Crew Members between players, recruiting extra Crew from your hand), but also can occasionally do weird stuff, like shuffling players’ hands together and re-dealing or reversing the passing direction.

Alchemists: They say the best offense is a good defense, and the Alchemists agree. They’re all about protecting your Crew from being wounded or revealed. Some are so good at what they do that they can even get wounded characters back. That’s always helpful.

Spies: The Spies know what’s hidden in the shadows, and they seek to bring secrets into the light. Most of the Spies concern themselves with revealing your opponents’ Crew Members, or limiting their Recruiting ability. Aggressive, but not quite in the same manner as the Knights.

Courtiers: The Courtiers are all about trading, but most importantly, unfair trades. If you play Courtiers you’ll often find yourself able to force opponents to swap Contracts, or if you’re feeling enterprising, you can steal Contracts or Crew Members from opponents. It’s easy to get a good deal if you’re not making fair trades.

Either way, once you’ve resolved all the Crew Member effects, you may hide the character that just acted (turning them face-down, even if they were revealed already). 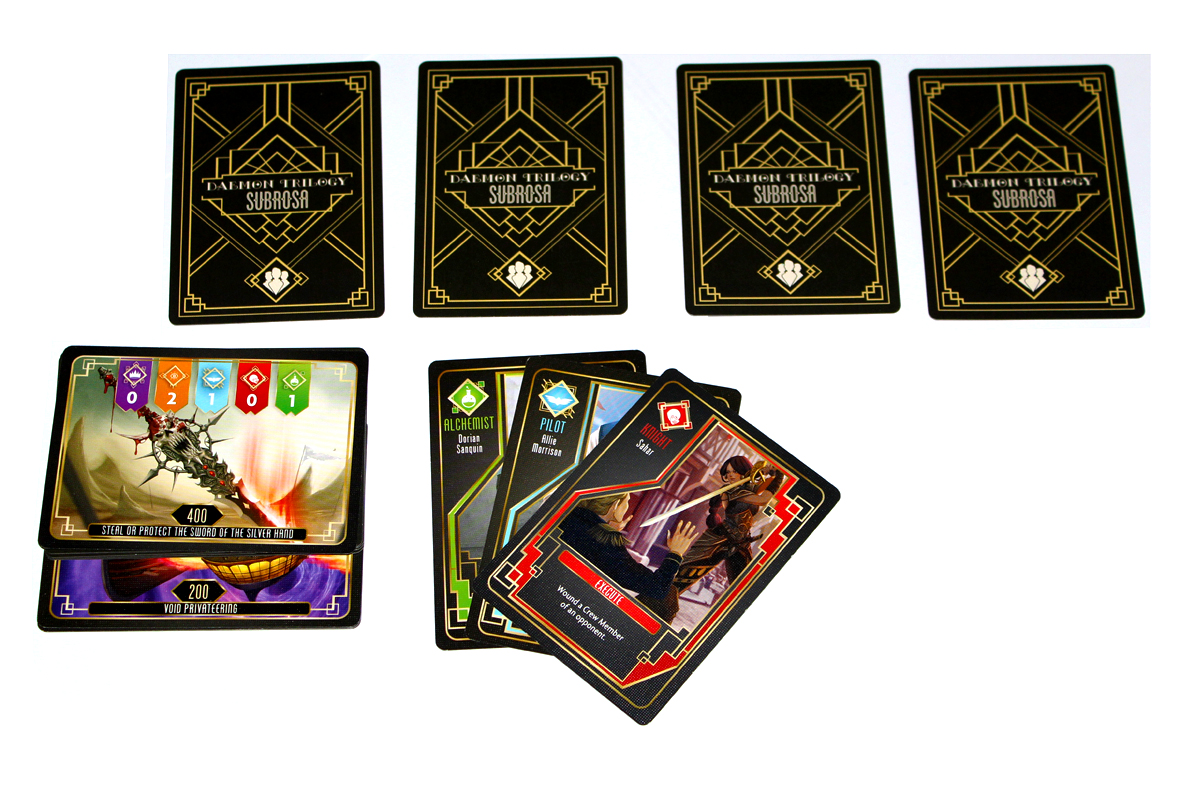 So, now that you’ve seen some Contracts, you can send your Crew Members out to complete them. Each Contract dictates a specific number and type of Crew Members needed to complete it. If you have that type and number of Crew Members in your Crew (face-up or face-down, doesn’t matter), you may reveal them now to score a Contract. Put the Contract and the Crew Members used into a scoring pile. Note that incomplete contracts are worth negative (half) points at the end of the game. That means an incomplete 800-point contract is now worth -400. Be mindful of that. Also, once cards have made it into your score pile, they cannot be messed with, returned, or removed. So that’s nice, at least.

Now, pass your cards (and the Initiative Token, if you have it) to the player on your left, unless the passing direction has been reversed. Continue to the next round.

At the end of a round, if any player has 1 or 0 cards left in their hand, the game ends immediately.

The different player counts change up the game a bit, depending on what kinds of game you’re looking to play. At lower player counts, it can feel less chaotic (as you have fewer people injecting their own special form of entropy), but it’s definitely much more personal, as there’s only so many people you can attack (especially at two).

At higher player counts, you risk being a victim of randomness, or worse — if you take the lead prematurely, you might be the target of everyone’s rage, meaning they’ll pile on you and completely wreck you.

The fighting element is a lot for me, so I probably prefer this at two or three players. If you like high chaos elements, though, you should check it out at five.

Overall, Daemon Trilogy: Subrosa is a fine game! Mechanically, it’s pretty solid and works well in what it’s presented to do. I think that the game is just not my particular cup of tea. That doesn’t mean that it’s bad or that I hate it, just that there are other games I kind of like better, especially at this time length. My major complaints are the sheer number of cards to read being kind of irritating for new players / making the first game kind of difficult to figure out and the type of player interaction, as I more prefer games where players compete for a shared resource (like the food in Evolution: Climate, for instance), both of which are more my personal opinion. If someone at a game night really wanted me to play this with them, I happily would, I think, is my assessment of it. That said, I’m still very much intrigued by the game trilogy and would like to see how the games link together, so I’ll hopefully have an opportunity to look into that in the future. If this sort of game appeals to you, though, it’s a solid production, so I’d recommend checking it out.