Dice games! I got into roll-and-write games a little bit ago, most heavily through Qwinto, a game which I love but have not published the review of as of this post, which is strange. Need to fix that, at some point. But either way, now I keep an eye on fun dice games. Until a few years ago I thought that there was only Yahtzee (and I hate Yahtzee, due to having had to program my own and grade about 40 more instances of other people’s), so I’m pretty glad to be wrong.

Anyways, in Harvest Dice, you’re taking the roll-and-write to the next level and doing a roll-and-draw instead, as you have to make sure that your veggies make it into your field, the market, or the belly of your beloved pig, Pip. Naturally, you want to have the best farm, so you challenge your friends to a farm-off to see who’s further afield than others. Will you be victorious, or will you be put out to pasture?

Setup is pretty trivial. First, decide if you want to play Basic or Advanced mode. (There’s an important difference.) Take the appropriate sheets:

For Basic, note that there are already X’s in the Carrot, Lettuce, and Tomato spaces. That’s an easy way to tell the difference. If you’d prefer Advanced, use the sheets on the right side.

Put the dice somewhere easily accessible. If you’re playing with only 2 players, use 2 dice of each color, not all 3: 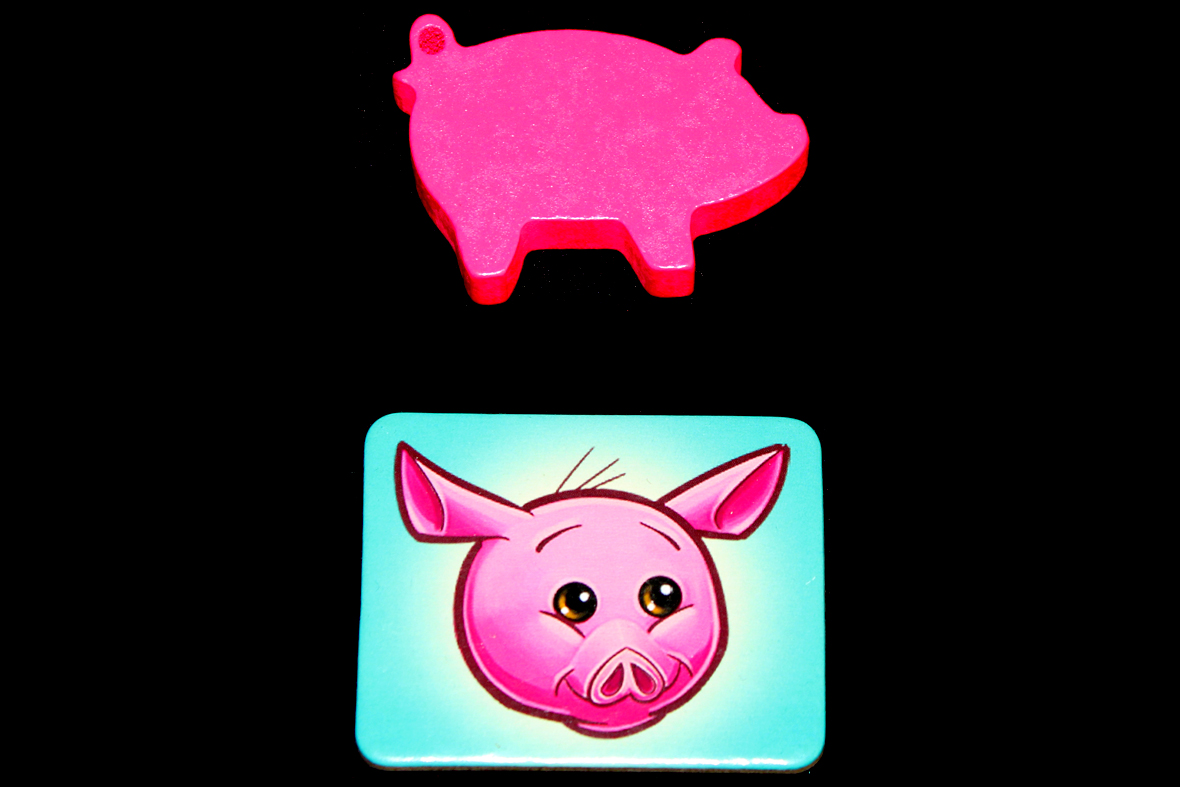 You’ll also note some pencils come with the game, and it’s important for me to show you them, here:

We’re all better off for having seen those. Anyways, give every player one and you’re basically ready to start: 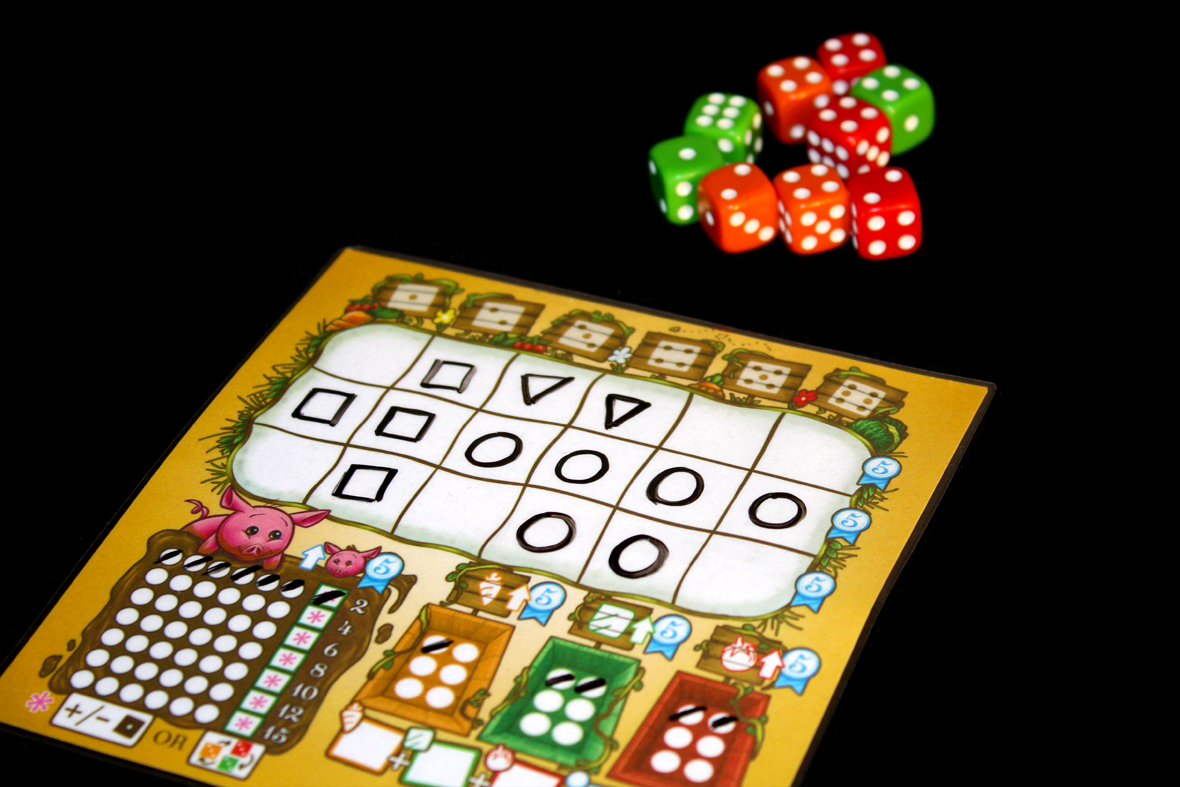 The game has some light similarities to a much lighter version of Sagrada (itself, arguably, a lighter version of Roll Player). In all of those, the start player rolls the dice and then all players draft the dice (each player takes one they want in turn order). When you take a die, you may do one of two things with it:

Pig powers may be stacked, provided you’ve completed enough rows. At the end of the game, you’ll score the number next to your furthest down completed row. Nice work!

Players continue taking dice in turn order until only one die remains (this means in a two-player game that players will take uneven amounts of dice). This die is sent to the market, meaning that all players check off one of the circles of that type in the bottom-center of their player sheet. This is important for scoring!

The game ends if, during a round:

When that happens, tally points:

Well, at four, it’s possible that if you’re going last you won’t even get an option for a veggie of a certain color, since there are only three dice, but either way you should keep an eye on who’s taking what (especially in advanced mode, as it’s pretty much impossible to get the most of everything). If you fight someone for control of a certain veggie, you’ll both lose, since hardly any of those will get to the market. That said, the contention is a really cool part of the game, so I’d probably recommend it (as I do with most drafting games) at three or four, but only slightly. I still think it’s fun at two. 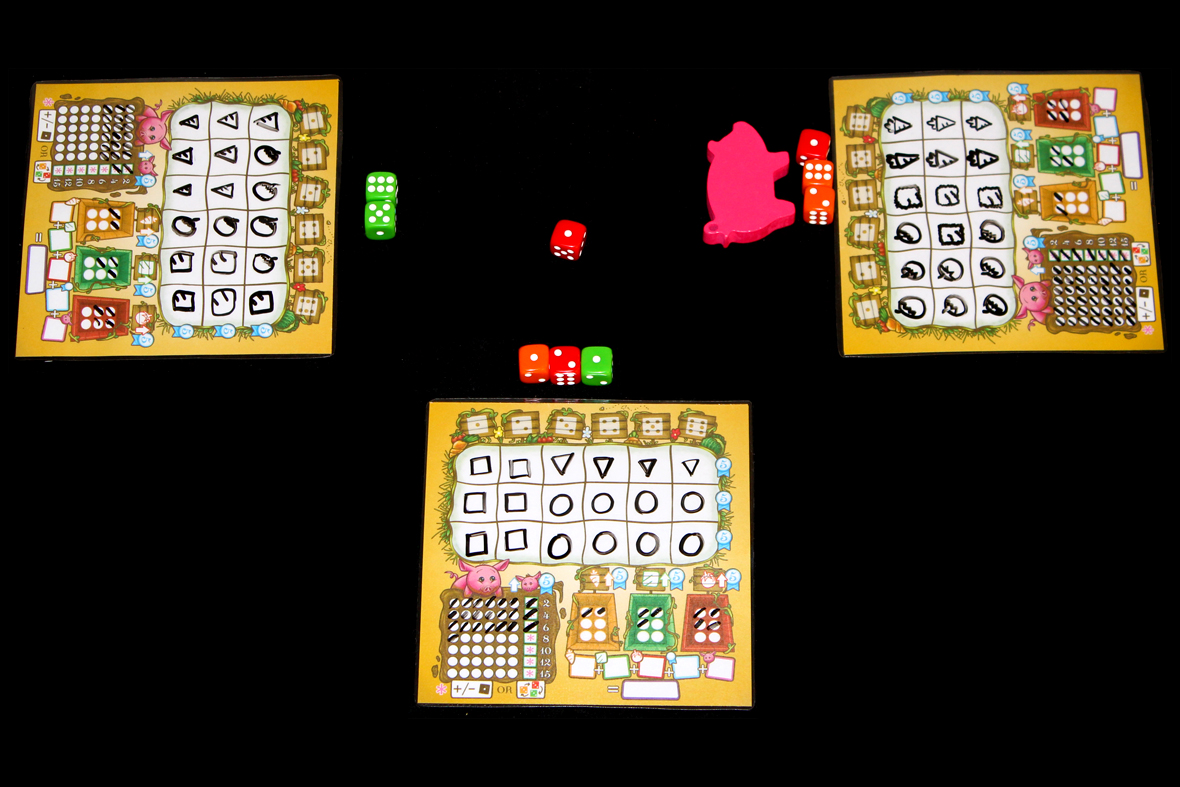 Overall, Harvest Dice is super! It’s, like I said, a cute roll-and-write with great art and a super-slick drawing mechanic that I like a lot, but it’s also got some nice drafting mechanics that are pretty cool. I’m a particularly big fan of the market mechanics and how not paying attention to what gets left behind can leave you with a very worthless board, if you’re not careful. It means that you need to watch what other players are rolling and taking and keep active attention even when it’s not your turn, which is something I’ve always liked about Qwinto, as well. If you’re looking for another solid roll-and-write and you’re not afraid to draw some really ugly veggies, then you should definitely check out Harvest Dice!