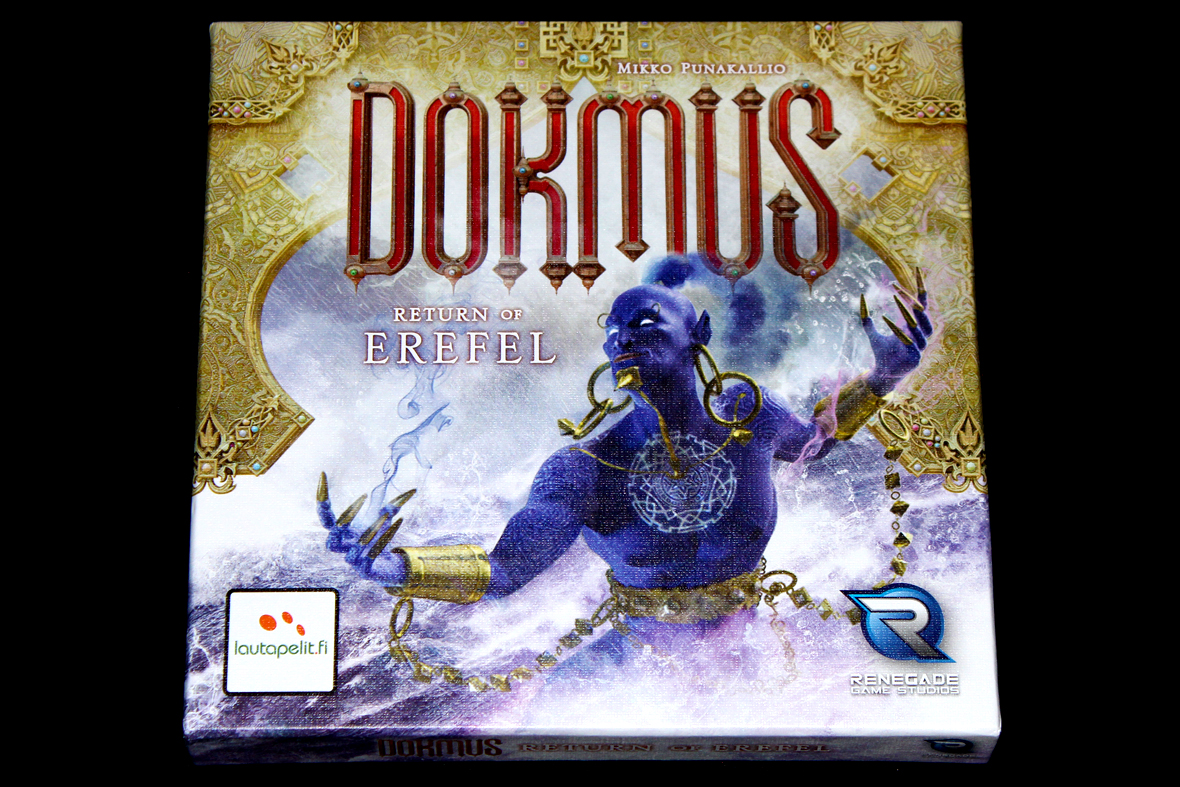 Full disclosure: A review copy of Dokmus: Return of Erefel was provided by Renegade Game Studios.

It’s been a super long time since I’ve reviewed an expansion; I think an entire year, essentially, unless you count One Night Ultimate Alien (which, I do not, since it’s a standalone). I think part of it is that an expansion requires a certain amount of depth in the base game to be able to break it out responsibly, and I haven’t had a consistent enough game group that I’ve played any game with to feel comfortable busting out an expansion unless it significantly alters the base game, like Einstein: The Genius expansion. But I’ll get to that review eventually.

In Dokmus: Return of Erefel, Erefel has … well, returned. After being banished for negligence, he was informed that he could only come back if he found something truly rad. And find something rad he did; something road, to be precise (it’s a pun because it uses all the letters of rad but with one more letter). Having discovered roads, he has brought them to Dokmus (and more) to help explorers of the island. Will these new innovations allow you to explore more than before? Or will the new challenges prove to be your downfall?

Alright, so, most of the setup stays the same as it was in the original Dokmus, so I’d recommend reading that review for that information, and I’ll cover what’s changed, here. There are three new modules you can add in, and any combination of them is valid: Erefel, the new Map Tiles, and Scenarios. I’ll cover each in turn. 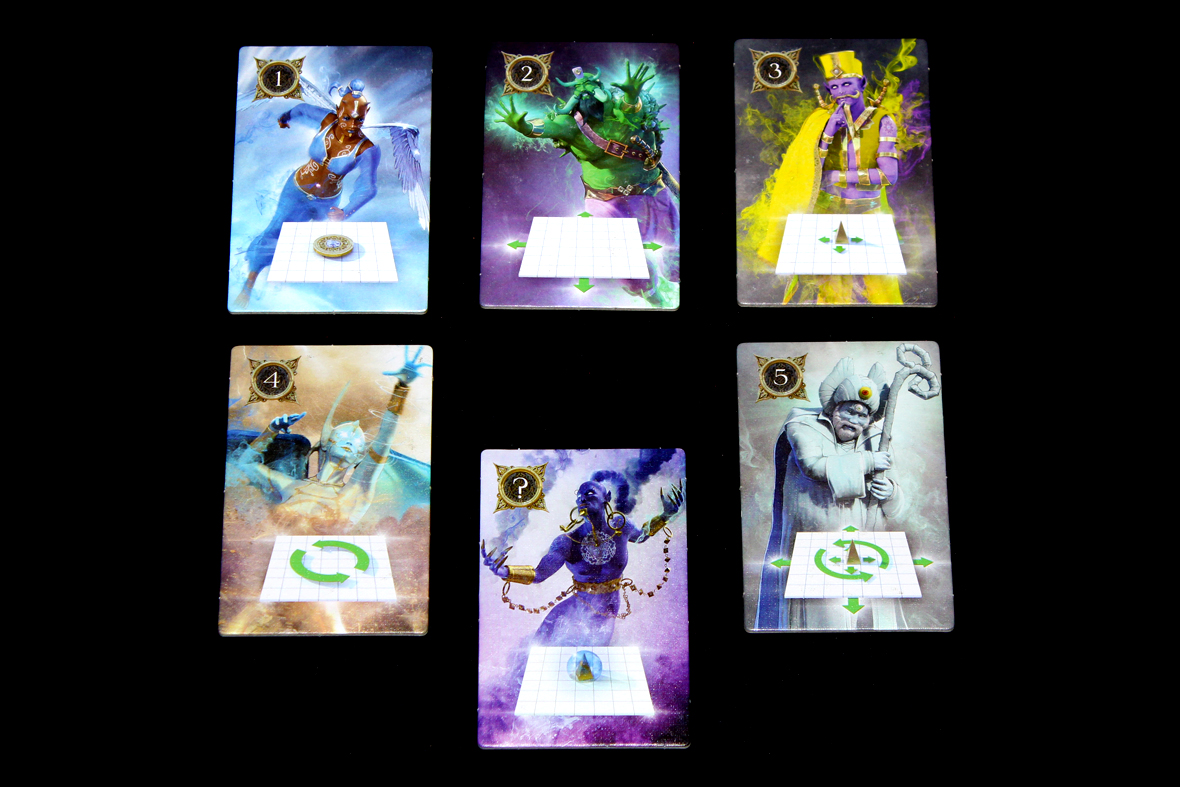 Just sorta put him in with the other guardians. Return of Erefel also adds in four new double-sided map tiles: 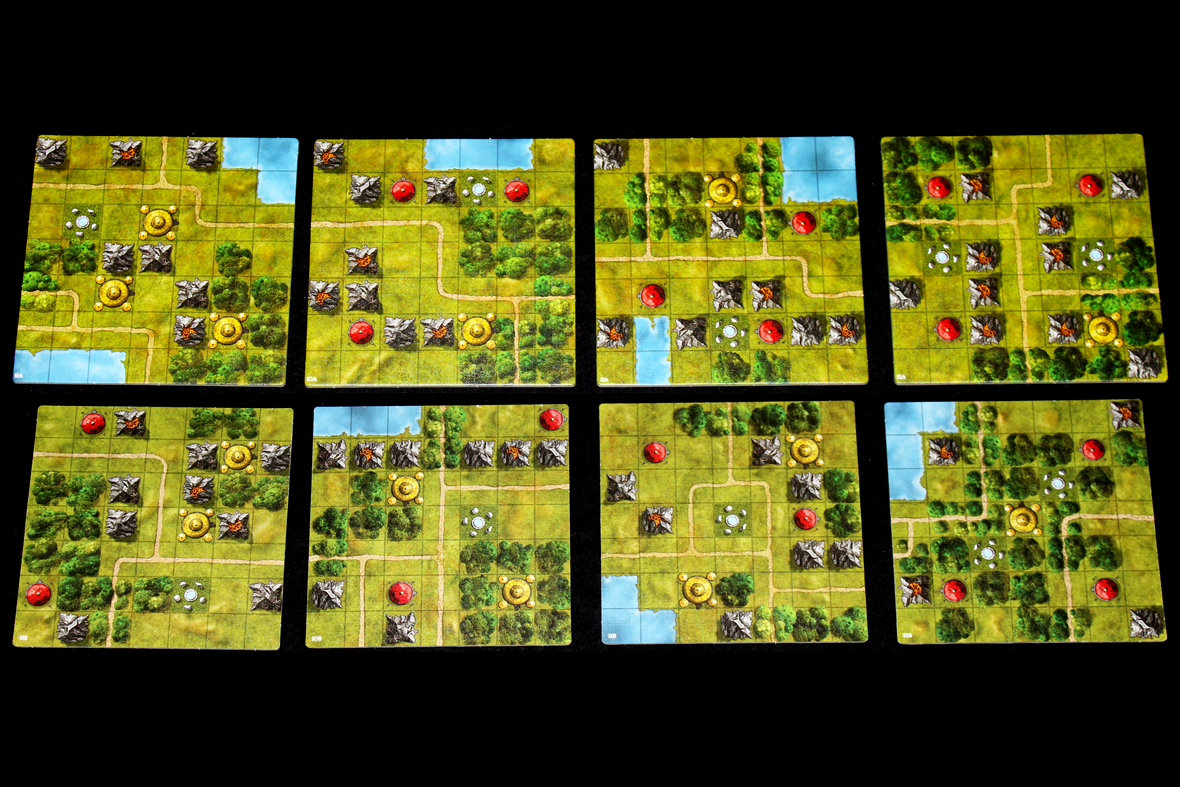 You’ll shuffle those in with the rest of the existing double-sided map tiles and then pick eight (five if you’re playing a two-player game).

Last, choose a scenario tile, if you want: 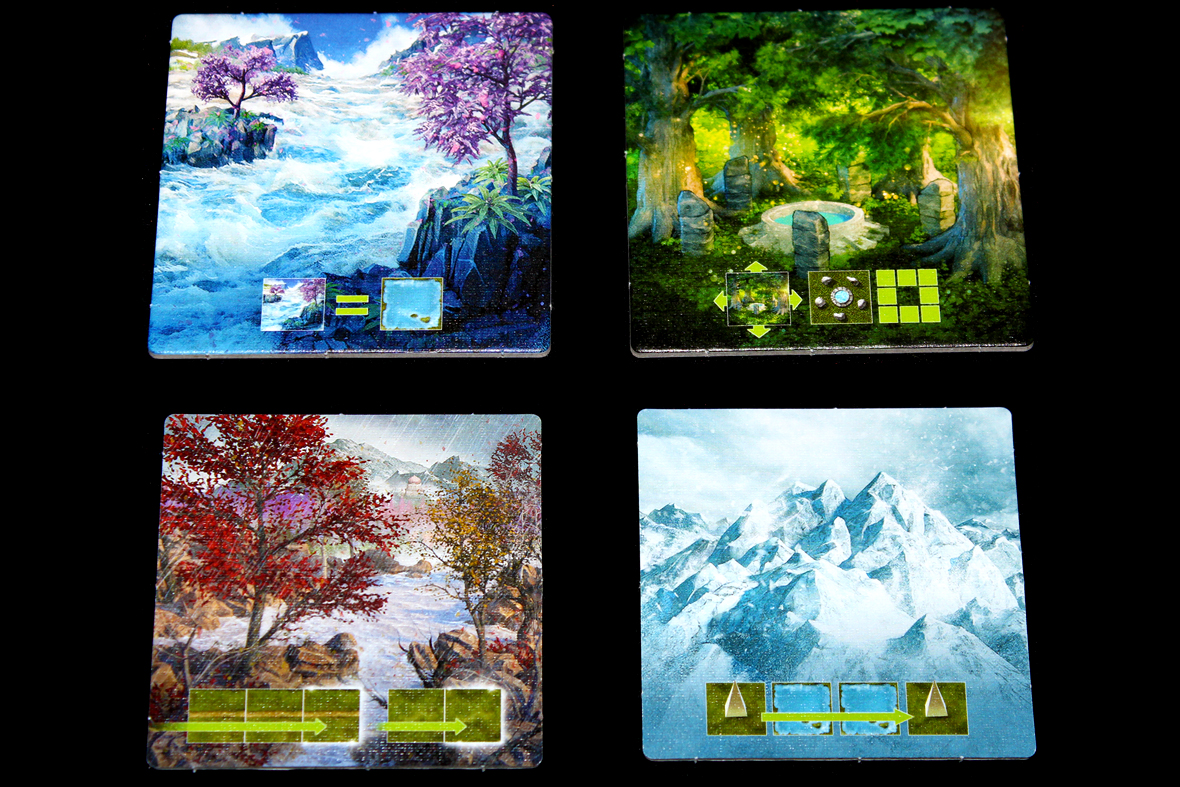 They have a variety of effects, which I will explain here and then probably again, in gameplay:

But yeah, place the Scenario Tile in the center so that everyone can see it. Now that you’ve done that, you’re ready to go! 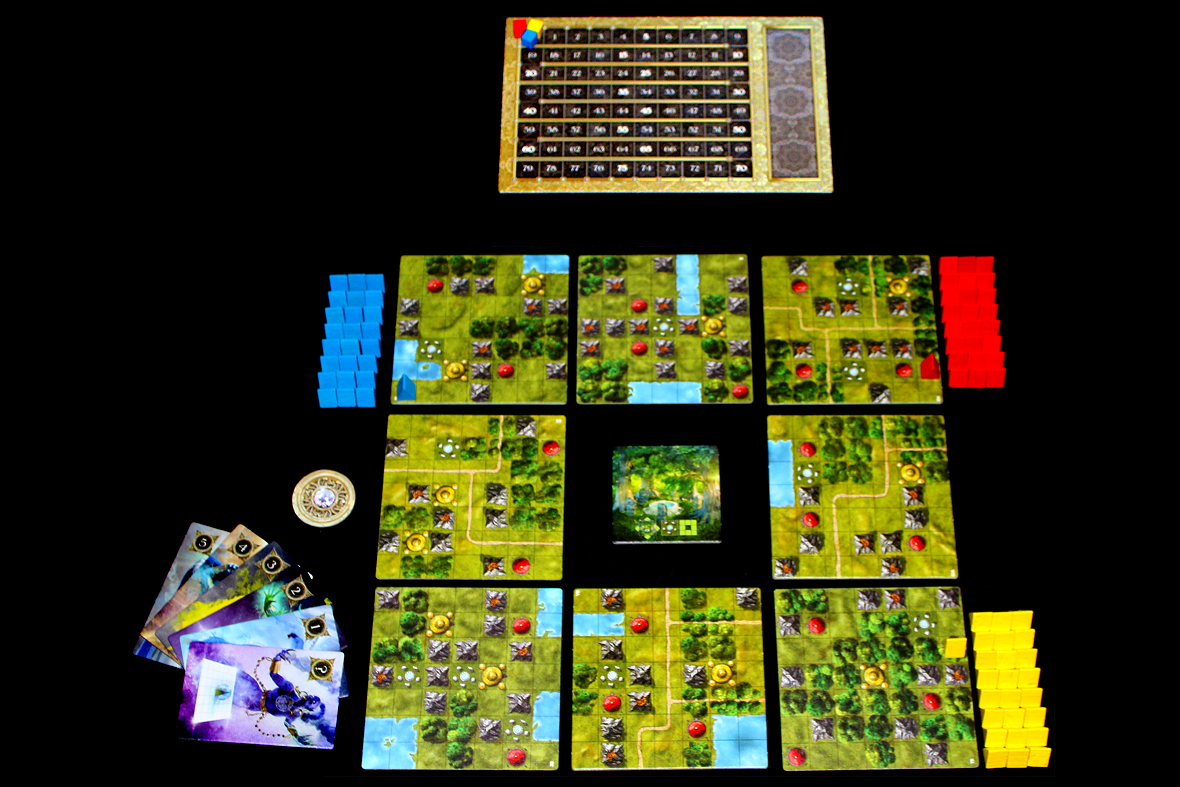 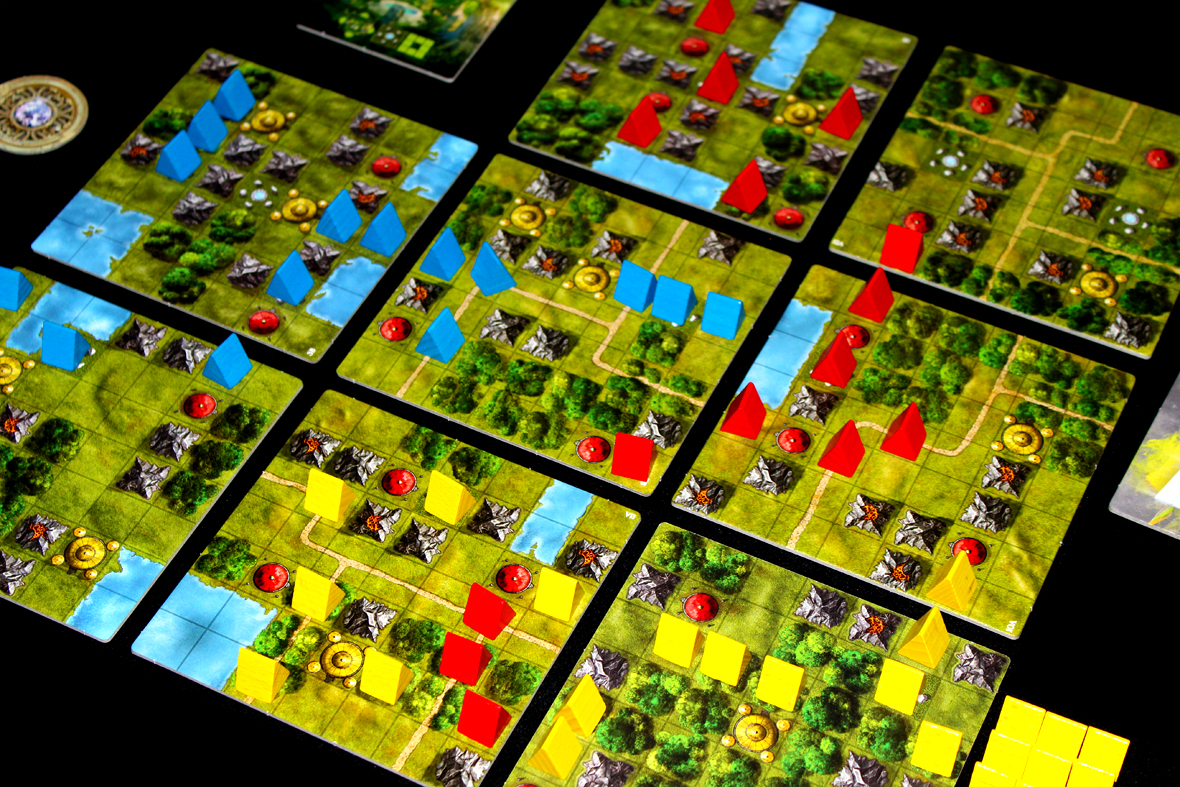 So, the gameplay is about the same as Dokmus, just with the extra bits added from the scenarios. I’ll cover the major differences, but for the core game check out my review of Dokmus.

As mentioned previously, he gets used with the other guardians. However, he doesn’t have a number! This makes things complicated. So, when playing with Erefel, you’ll have some guardians that end up not getting used by any player. Reveal them once everyone’s chosen a guardian — Erefel’s number is the highest of the numbers that have been left out.

Now, the map tiles. You’ll notice the map tiles have roads on them. When placing on a road, you may skip a space and place on an adjacent tile, provided that tile has a road that is connected to the tile you would have originally placed on. That’s handy! Helps you move a bit faster around the board. This applies if you’re placing normally, placing via a temple, or moving onto a road after exiting a waterway. The important caveat is that you cannot use roads to jump over tokens. Only empty spaces. You can start on a road, provided it obeys the normal starting rules, nothing weird about that.

Last up is the Scenario Tiles:

Their effects are, again:

If you would move a tile into the spot occupied by the Scenario Tile, simply swap the Scenario Tile with the tile you’re moving in. This doesn’t matter for Ice or Wind, but it matters a lot for Water and Sun, since adjacency to the tile in question is important. 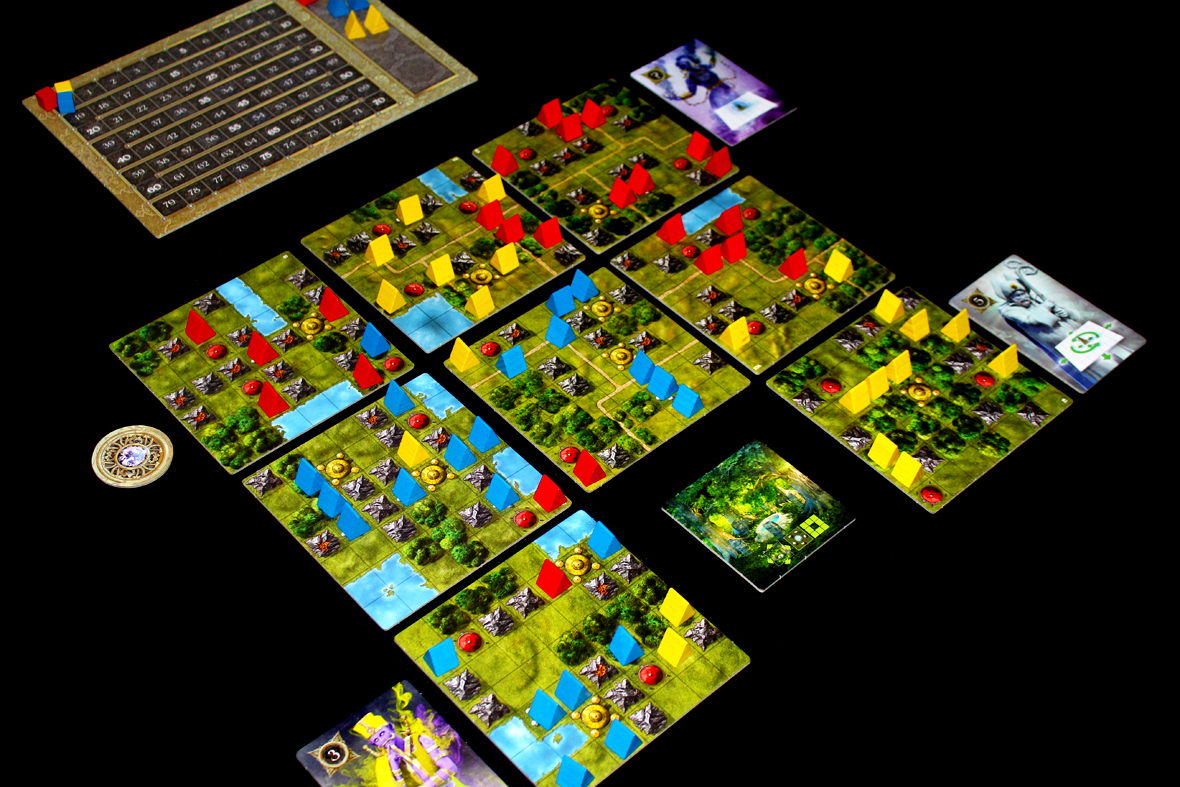 The game continues, as usual, until the end of the eighth round. Helpfully, the expansion doesn’t change scoring rules at all, so the player with the highest score wins!

It’s uh, essentially the same as Dokmus, if I’m being honest. The new expansion bits don’t add much more complexity, just a variety of new modules to try out. You still lose a chunk of the board at 2 and you have a bit more crowd at 4. I’d generally recommend it at 3, personally, or 2, but if you’re playing at 4 (and it’s fun at 4, don’t get me wrong) you should take extra precautions to get the Talisman. Otherwise, you’re going to be stuck going last in the draft every time, which will almost certainly cause you problems when you’re trying to execute your vision.

Overall, Return of Erefel is a solid expansion! As I mentioned, it’s primarily additive, so it’s a great way to refresh yourself on Dokmus or a solid gift for a Dokmus fan, as I find all the things it adds enhance the game. I wouldn’t say any one thing blows me out of the water, but I think everything it adds is thoughtful and well-implemented. I wouldn’t necessarily recommend trying it without an appreciation and some experience with the base game (which is part of why it took me a while to get the review done), but once you do get it to the table it’s a lot of fun. So, yeah, if you’re looking for an interesting way to put some spin on or spice up your Dokmus experience, look no further than the Return of Erefel!