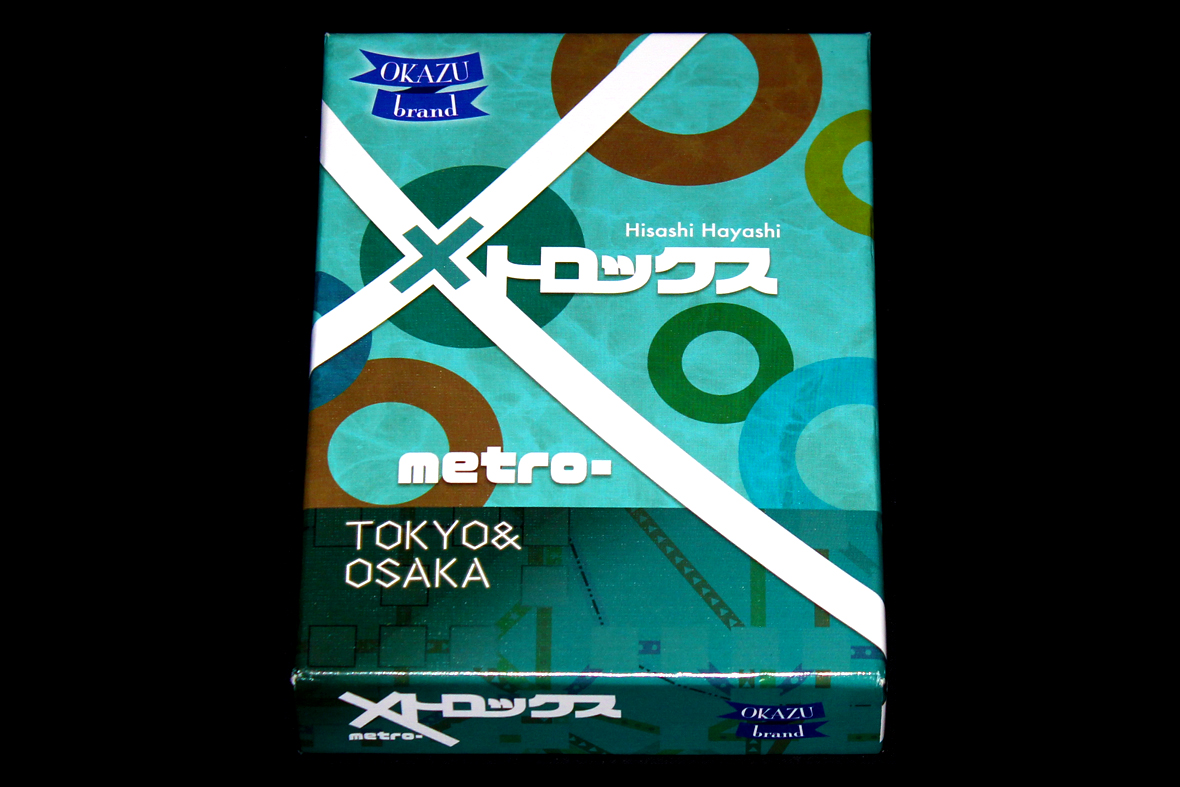 So I’ve been playing a lot of roll-and-write / roll-and-write-adjacent (* and write is what I’m currently using) games, lately, from Qwinto to Qwingo to Boomerang to … well, a lot of things. I got in a few new ones, Let’s Make a Bus Route and MetroX, so let’s tackle them both. Or, at least, at time of writing, I was tackling them both; who knows what the release order will look like. (Editor’s Note: I ended up going with MetroX first because I’m hoping to compare / contrast it with Railroad Ink, when I end up doing that review.)

In MetroX, you are building subway networks underground by filling in stations on your own little maps. You’ll be pitted against other players who have the same map as you, meaning that every choice you make will count (since they’re given the same choices). Will you be able to build the best subway network? Or will you just be taken for a ride?

There’s not really any setup. Choose if you’re playing the Tokyo or Osaka maps:

Give each player one of the chosen side of map and some writing utensil. Shuffle up the cards: 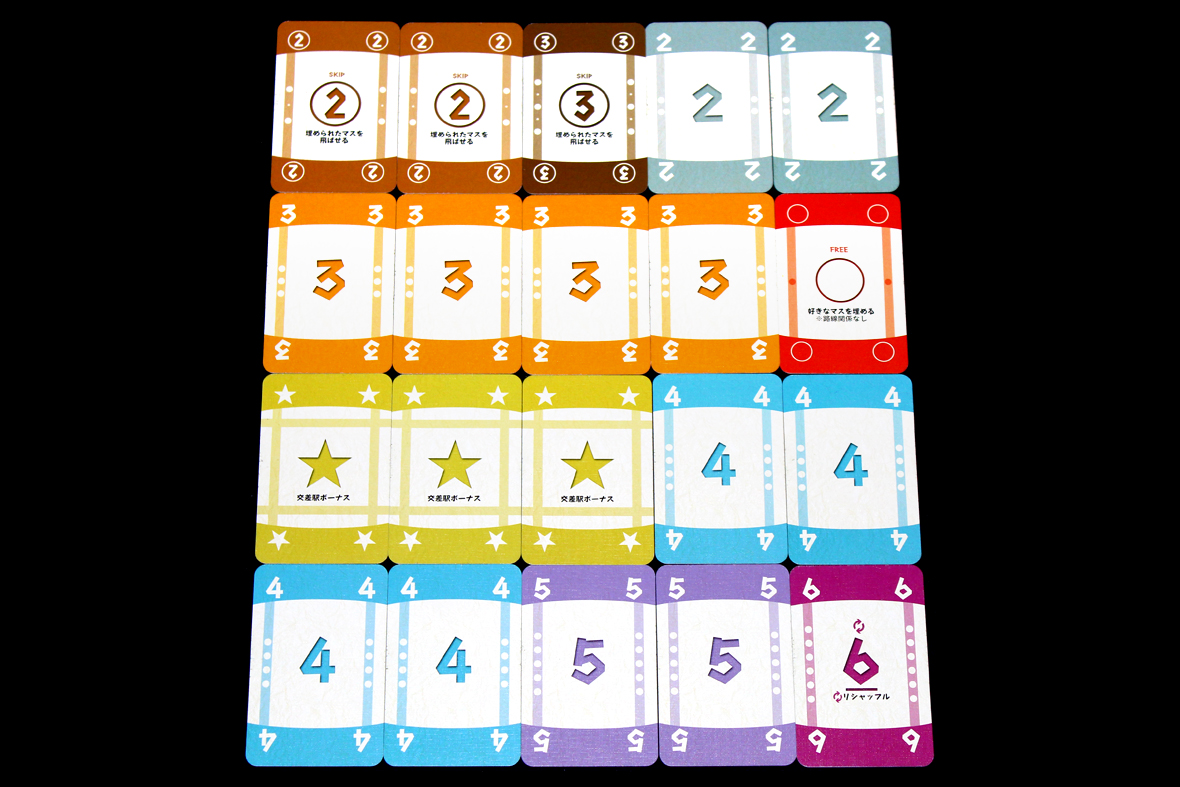 And you’re basically ready to start! 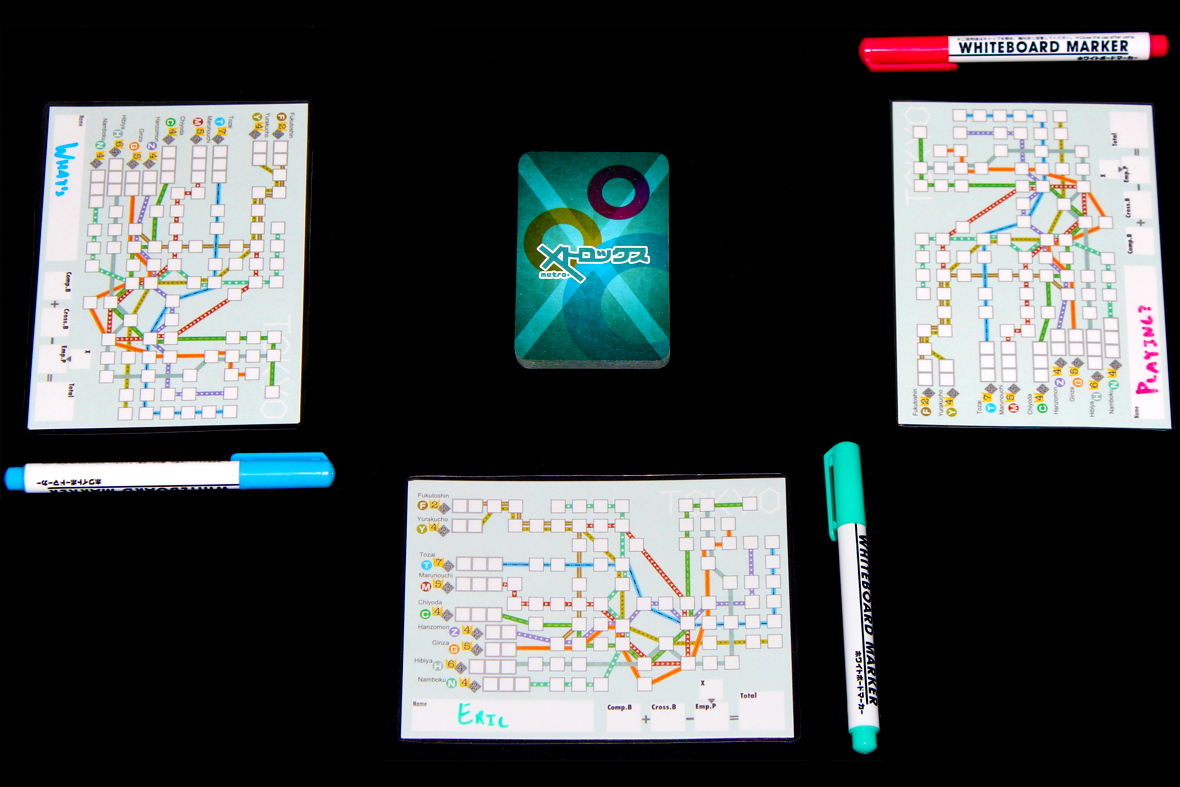 MetroX is straightforward in concept and a bit more difficult to apply in practice, which is always nice. For a round, you’ll reveal a card from the deck and apply its effect to all players, simultaneously. For this, you need to know two terms:

Now that you know what those are, let’s draw some cards:

Number Cards are just straight up numbers. When you draw one, you must add one to an available indicator box. After doing that, starting with the empty Station closest to the indicator boxes on that line, draw empty circles until you:

All circles from a number card must be played on the same line. If you draw a 6, shuffle all played cards back into the deck, including the 6.

Skip Number Cards are a bit more interesting. Like regular number cards, they go in an available indicator box and you start from the empty Station closest to that line’s indicator boxes. However, there is one major difference; you fill in empty boxes until you:

Note that you skip stations that are already filled, hence the Skip Number moniker. To symbolize this, also draw a circle around the number in your indicator box. That should help you keep track. 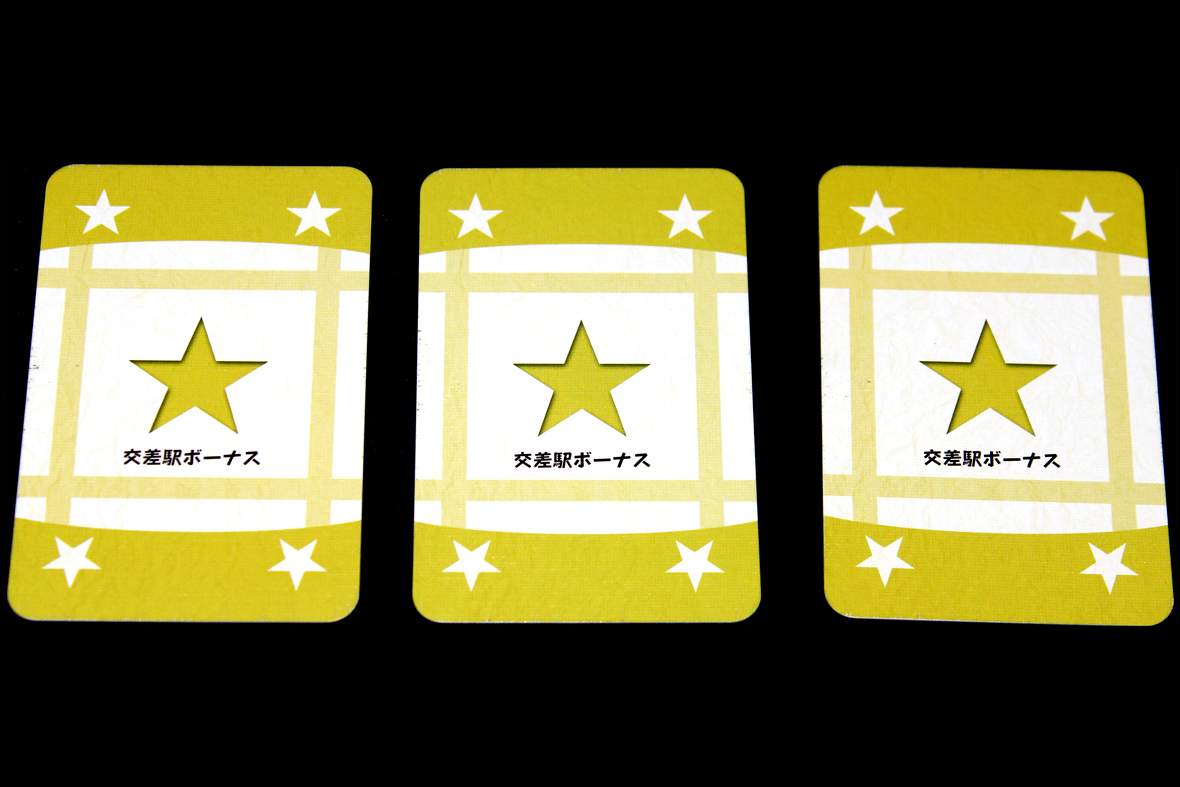 Star Cards are either a blessing or a curse, up to you. When you draw one, add a star to an available indicator box, and go to the closest empty Station on that line. There, rather than a circle, you’ll write a number equal to (2 * number of lines going through that Station). This will be worth points at the end of the game.

The Free Card is a blessing, always. When drawn from the deck, mark nothing in any indicator box, but pick an empty station of your choice, anywhere on any line, and fill it in. It’s just good, basically.

If, for some reason, you cannot add more circles to a route (it’s filled) but you still have empty spaces on your indicator boxes, you may put a number there on any turn to just … do nothing.

Once everyone’s filled in their circles / numbers, check to see if any lines are completed. A player has completed a line if they have filled in every Station on that line from the start (closest to the indicator boxes) to the end. If they have and they are the first to do so, they get the gold crown points. If they are not the first to do so, they get the points in the silver box. It will help players if they circle or cross out route bonuses so that they know what’s available. If multiple players simultaneously complete a line first, they all get the line’s gold points.

The game ends when all players have filled up all of their indicator boxes (this should happen simultaneously, as the cards are only drawn by one player, similar to Avenue). You’ll then tally three points categories:

The player(s) with the most points win! If you’d like, you can also play solo; it works the same way, but you always score the Gold Bonuses for completing a route, which is probably nice.

The only real one that I’ve seen is that it’s more likely that the scores will be slightly lower, as more players will complete more routes (just probabilistically) before you’ll be able to get to them. That’s all well and good, though. It’s also a bit of a problem if you play with people with AP, as one person holding up 3 people isn’t bad, but holding up like, 10 – 15 people might not make for a great party. I don’t have a strong preference, though, beyond teaching it to more than 6 people at once is a pain. If you’re going to go above 4 or 6, maybe run off a few more copies of the rules, first.

Overall, MetroX is superb! Like I said, I’m already a sucker for transit-themed games, but this one in particular hits a lot of sweet spots, for me. It’s thinky without being too intense, short and easy to get through a few games, scales decently to multiple player counts, and is honestly just a lot of fun. The portability is a major value-add for me, as it means I can just take it on the go with me, and it’s simple enough that I can probably play it on an airplane (though I’m much more likely to sleep or play my Switch, all things being equal). If you’re a fan of transit-themed games, love games like Avenue / Kokoro, or are looking for something relatively short but that’ll hurt your brain just a bit, I’d highly recommend checking out MetroX, if you can get your hands on a copy! It rocks.