Full disclosure: A preview copy of Bad Maps was provided by Floodgate Games. Some art, gameplay, or other aspects of the game may change between this preview and the fulfillment of the Kickstarter, should it fund, as this is a preview of a currently unreleased game.

Alright, looks like it’s gonna be a mix of a few things this week, with Kickstarter previews (this and FlickFleet), review of a base game ahead of its expansion (Planetarium, revived from the depths of my Review Buffer), and even, blessedly, two more Gen Con games (for me; I know Fairy Tile‘s been out for a while, but Most Wanted is new!). That makes 5 total; who said Labor Day’s about taking a day off? Let’s check out Bad Maps, from Floodgate!

In Bad Maps, you play as some pretty shoddy pirates. Not only do you have your treasure maps all in the wrong order, but you can’t even afford your own minions! (You’d probably fit in just fine with the divers in Deep Sea Adventure.) Now, it’s time for you to try and hunt down the treasure before the other players can get their hands on it, because, well, pirates aren’t known for their generally positive attitudes towards sharing. Will you be able to get to that coveted hoard? Or will your minions massively miss the mark?

Setup is pretty straightforward, thankfully. Take out the board: 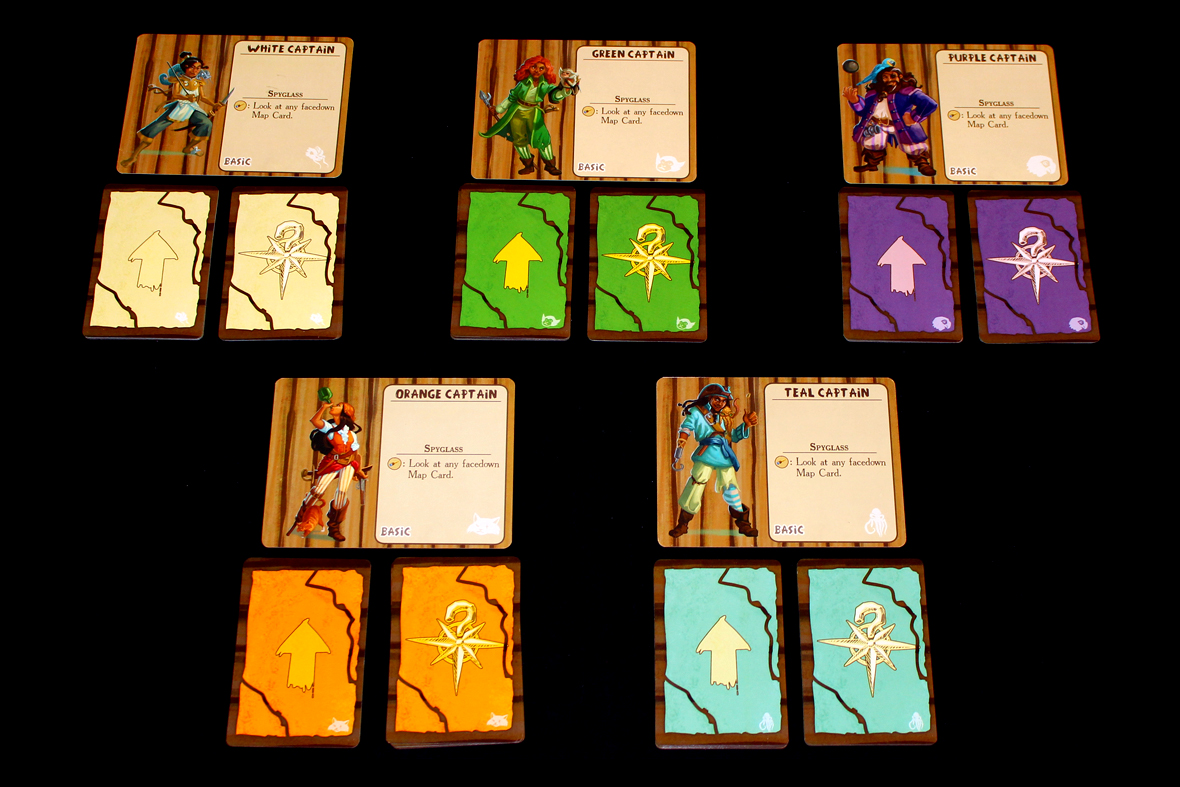 Each of the Pirates has an Advanced Ability (or two) that can be used later in the game to help you out.

Give each Captain a Spyglass token: 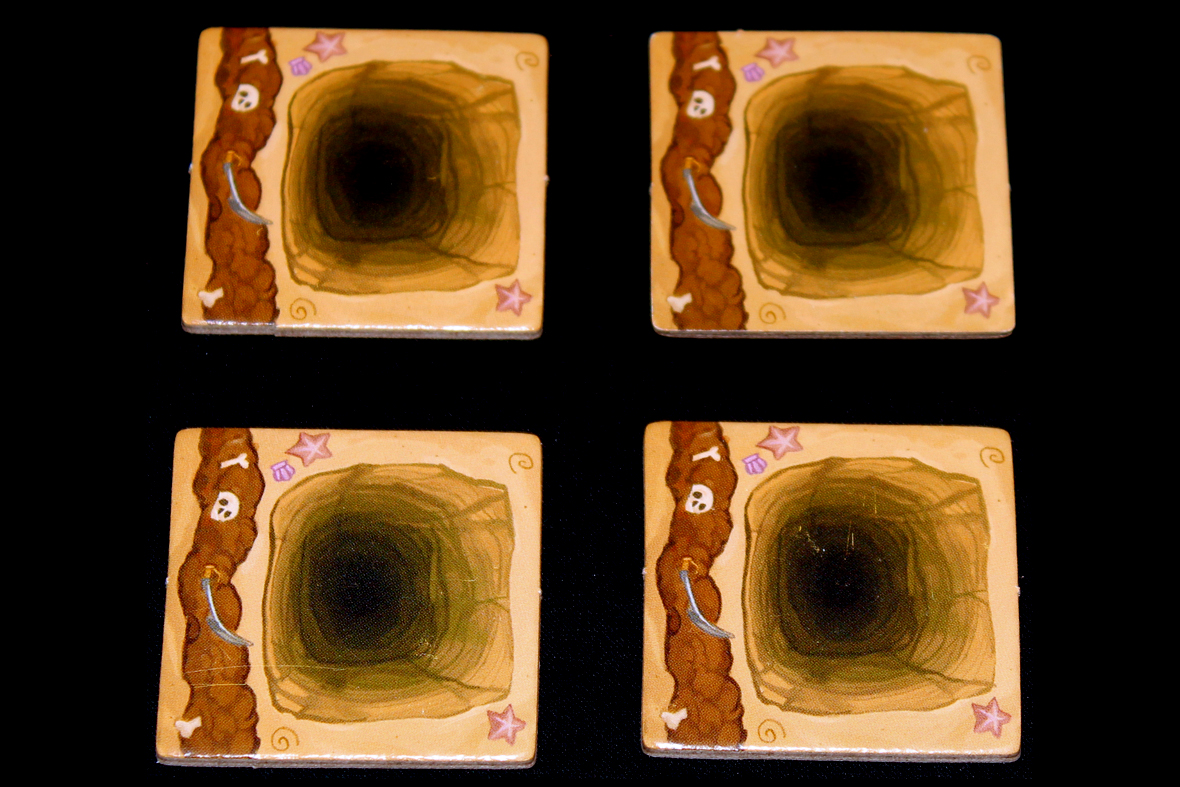 There are two sets of objective cards. Round 1: 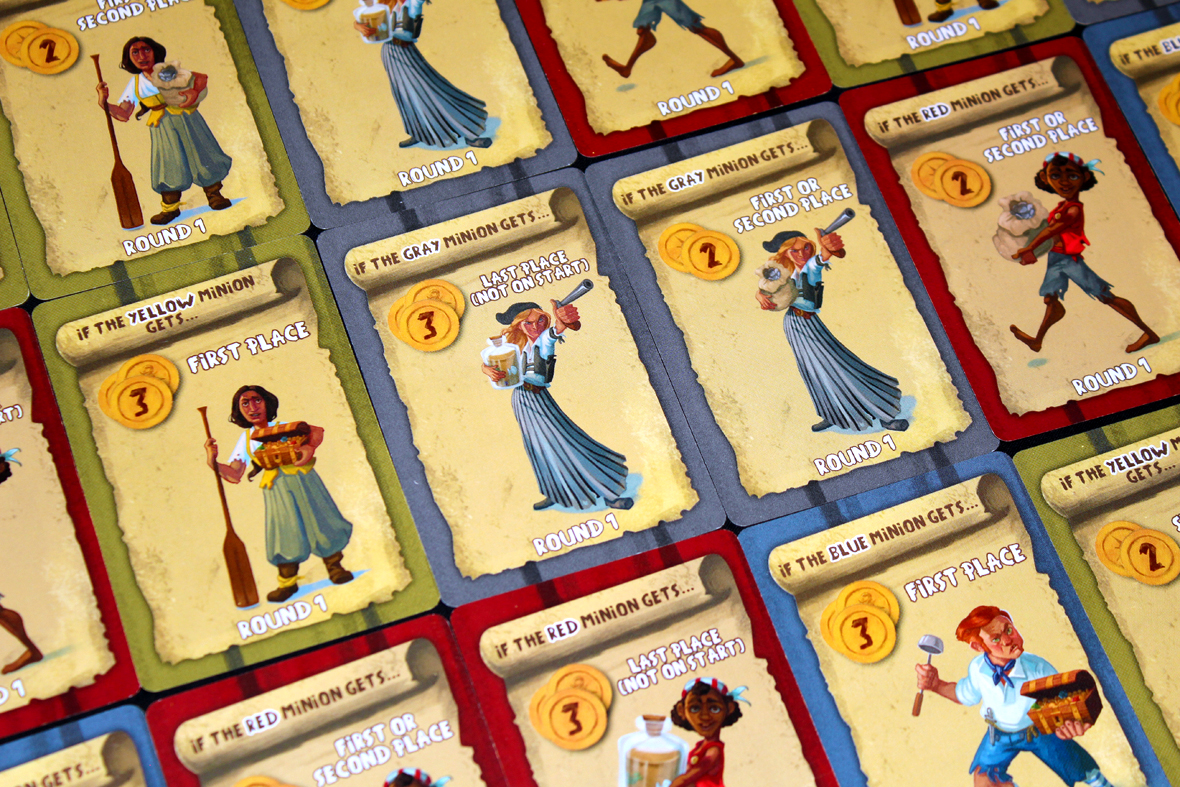 Shuffle the Round 1 and Round 2 Decks. Once you’ve done that, shuffle the Blackout Cards (using the correct number for your player count):

After you’ve done that, you’re ready to start! 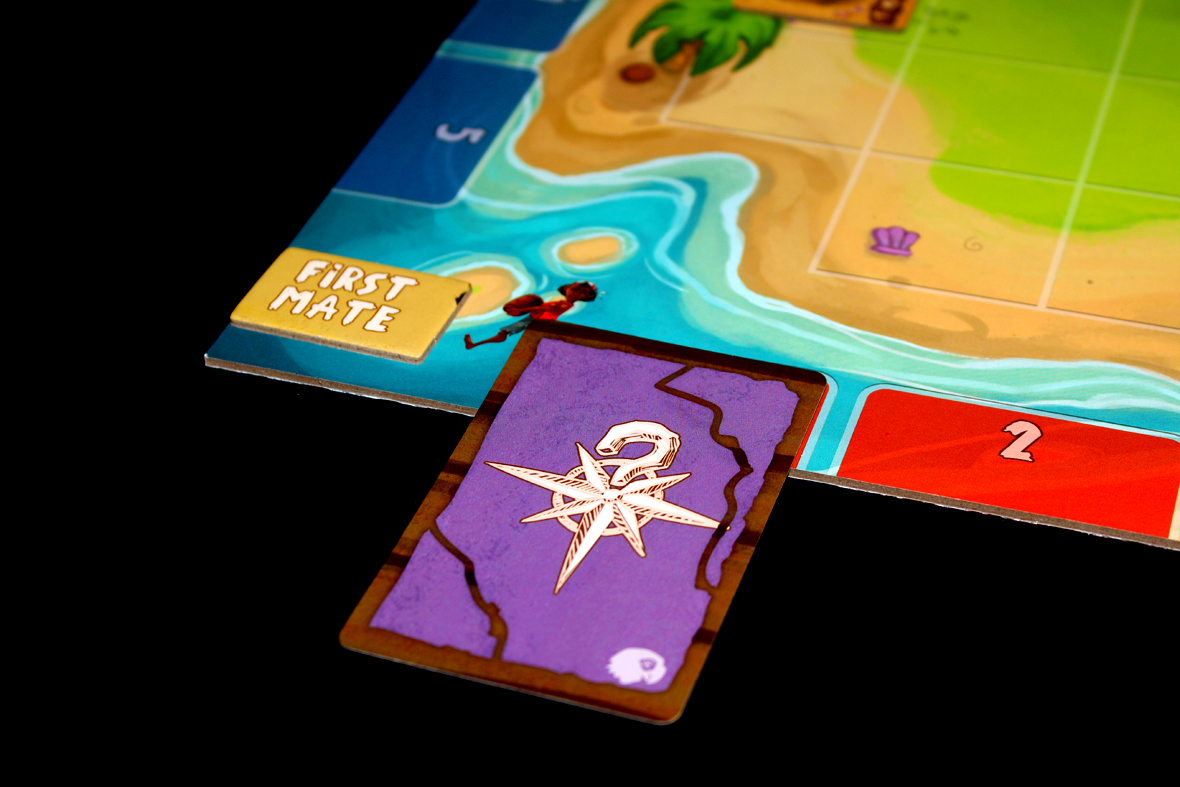 So, Bad Maps, at its core, is an action programming game with a bit of a wagering element. Over the course of the game you’ll attempt to bet on how well the minions will perform and earn points. The player with the most points will win! Unfortunately, the minions are mildly unhelpful and will do whatever anyone tells them to do, meaning you have no idea what they might have been told, usually. How does that work? Let’s find out.

During this Phase, reveal the top card of the Blackout Deck. This will determine which Map cards are played face-down or face-up during the Making Maps Phase, so keep an eye on these.

Now, every player draws 4 Objective Cards. Keep three and discard one; you’ll discard another at the end of the Making Maps Phase. Keep in mind that you can only score one card for a particular minion per round, so if you draw two of the same color, you’re best off discarding one of those.

After you’ve done that, move on to the Making Maps Phase unless you’re playing a two-player game. At two players, take an unused set of Map Cards and shuffle the Movement and Direction cards separately. Then, add those cards (face-up) to the spaces indicated on the two-player Blackout Cards.

During this phase, you’ll take turns placing cards on the leftmost open space for any minion of your choice. Each player in a 3- to 5-player game places one card per turn; in a 2-player game, each player places two cards per turn, but cannot put two cards on the same minion.

When the first card is placed by a player, add the “First Mate” token to that minion. They will move first during the Hunt for Treasure Phase.

Normally, most cards will be face-down. If that doesn’t work for you, you may be able to fix that, a smidge. Most players have the Spyglass ability, and you may use one of your Spyglass tokens to activate it. This lets you (and only you) view a particular face-down card that’s not yours. Treasure that information. Once all minions have all of their spots filled, it’s time to discard another Objective card.

Once you’ve discarded that objective card, move on to the Hunt for Treasure phase.

This phase is mostly about execution. Starting with the First Mate, perform each minion’s next available action, flipping them face up and doing it in minion order. This means that each minion will do Action 1, then 2, then 3, and so on. This might lead to … interactions.

Once all Minions have resolved all of their Map cards, the round ends.

During this phase, you score the current round and prepare for the next one. At the end of either Round 1 or Round 2, check each minion’s orthogonal distance from the X:

It is possible for all Minions to be first and last, or some Minions to be second and last. Ties are friendly. Minions on their Start Spaces are disqualified. They do not place at all and you cannot score Objective Cards with their image on them. Sorry; that’s what happens when you accomplish nothing.

Now, reveal your Objective Cards and score them. Remember, you can only score points for each Minion once, so having “Red Minion – First Place” and “Red Minion – First or Second Place” is actually not that useful, unless you were hedging your bets, I suppose.

At the end of Round 1, give the Start Player token and an extra Spyglass to the player with the fewest points, and each Minion immediately digs a pit on their current space, with two exceptions:

Additionally, every player gets their initial Spyglass token reactivated.

After Round 2, do not dig more pits; just end the game.

The game ends after Round 2, and the player with the most points wins!

So I’ve mostly played at 2 and 3, and I think that’s the sweet spot for me. Those are the lowest player counts, so they maximize control without sacrificing too much and I like the control aspect. At 4 and 5 I worry that I’m essentially just playing a randomized party game with some betting elements. I don’t think that’s always a bad thing; that’s just not what I’m personally looking for. If you’d like to have less control, push up that player count; for more control, lower it.

Also don’t forget that at two you have a dummy player that randomly adds cards face-up after the initial drawing / discarding of Objective Cards, and you must play two cards during the Map Making Phase (one each to two different minions, if possible).

Overall, I think Bad Maps is alright. I’ll mostly bemoan the lack of agency I feel when I play and how long it takes relative to that lack of agency, but I’m also not the biggest action programming fan in town. I think for fans of Robo Rally and similar games, this adds in an amusing betting component that may not be in every game you’ve played before, and it forces you to try and guard your favorite Minion from your opponents (and the fact that you’re all communally programming a Minion is interesting). The problem I have is that there’s no real way to guard your favorite Minion, and at higher player counts you’re basically just throwing yourself to the wind and hoping that you land on your feet. That said, I think a speedy variant of it would bring me right back in, because I already enjoy the art, theme, and ease of setup; I just wish I was doing more as a pirate than realizing that maybe the real treasure was just the friends we made along the way (usually because I end up with none).