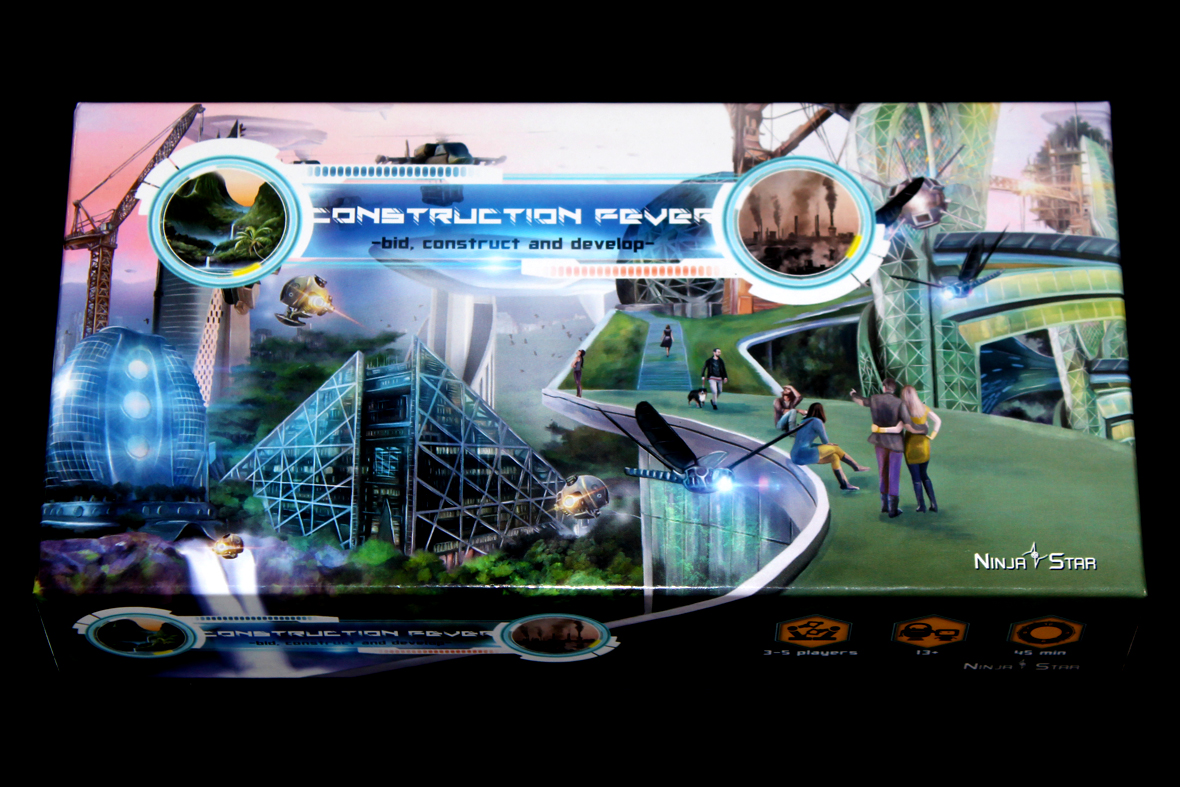 Full disclosure: A preview copy of Construction Fever was provided by Ninja Star Games. Some art, gameplay, or other aspects of the game may change between this preview and the fulfillment of the Kickstarter, should it fund, as this is a preview of a currently unreleased game.

Another busy week! For some reason, it feels like May is a stronger Kickstarter month than other months? Or I just got a lot of requests for Kickstarters before I got Too Busy, maybe? Who knows. Either way, there’s always more games, so let’s dig right into Construction Fever.

In Construction Fever, you play as CEOs of construction giants. Your goal is to impress your shareholders by building increasingly profitable projects, but you also (correctly) assume that they’ll fire you if you sink the corporate image (though it’s hard to imagine you doing so more explicitly than, say, Papa John). The only two things that matter to you are profit and reputation, so, how will you balance them? Can you lead your company into a profitable new future?

Almost none. Take the cards: 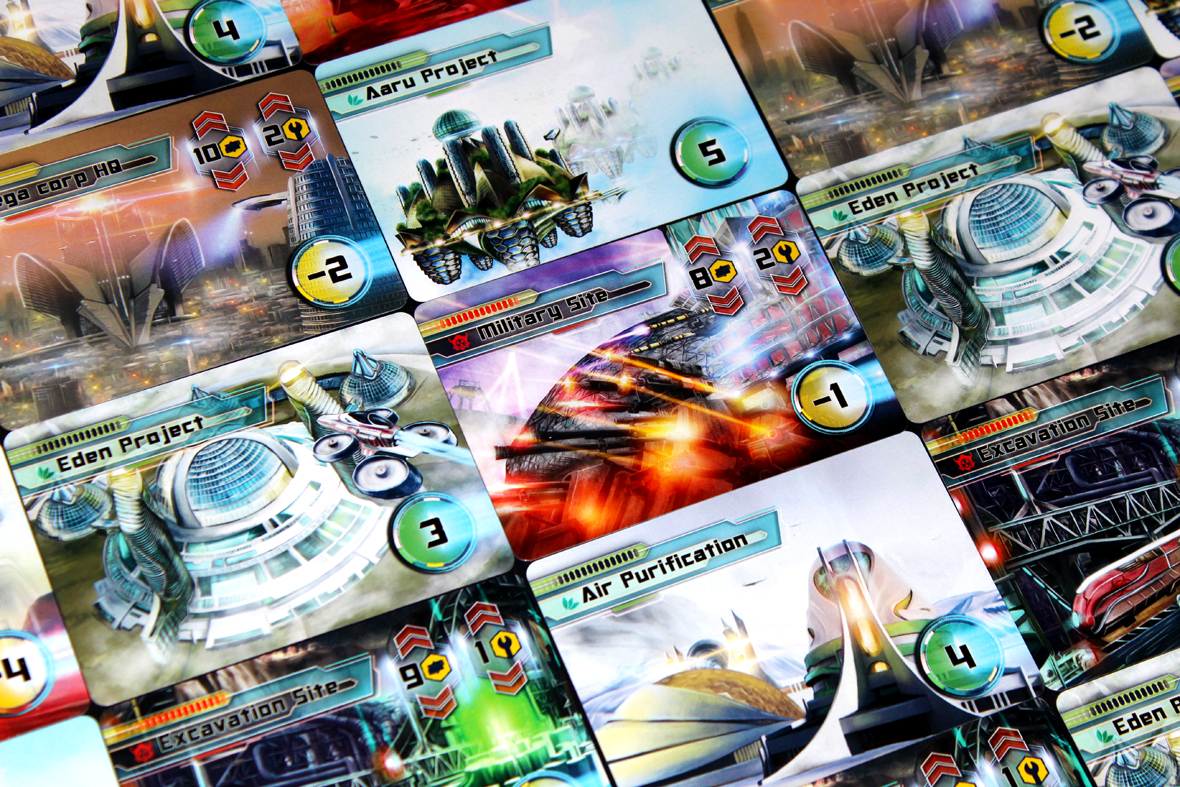 Put the blackish cards in one pile and the whiteish in another. Shuffle the piles, remove two from each, and place them in the center of the play area. Put the Green and Black Project Markers below them; they’re the white circles. Set the Credits in the center, too: 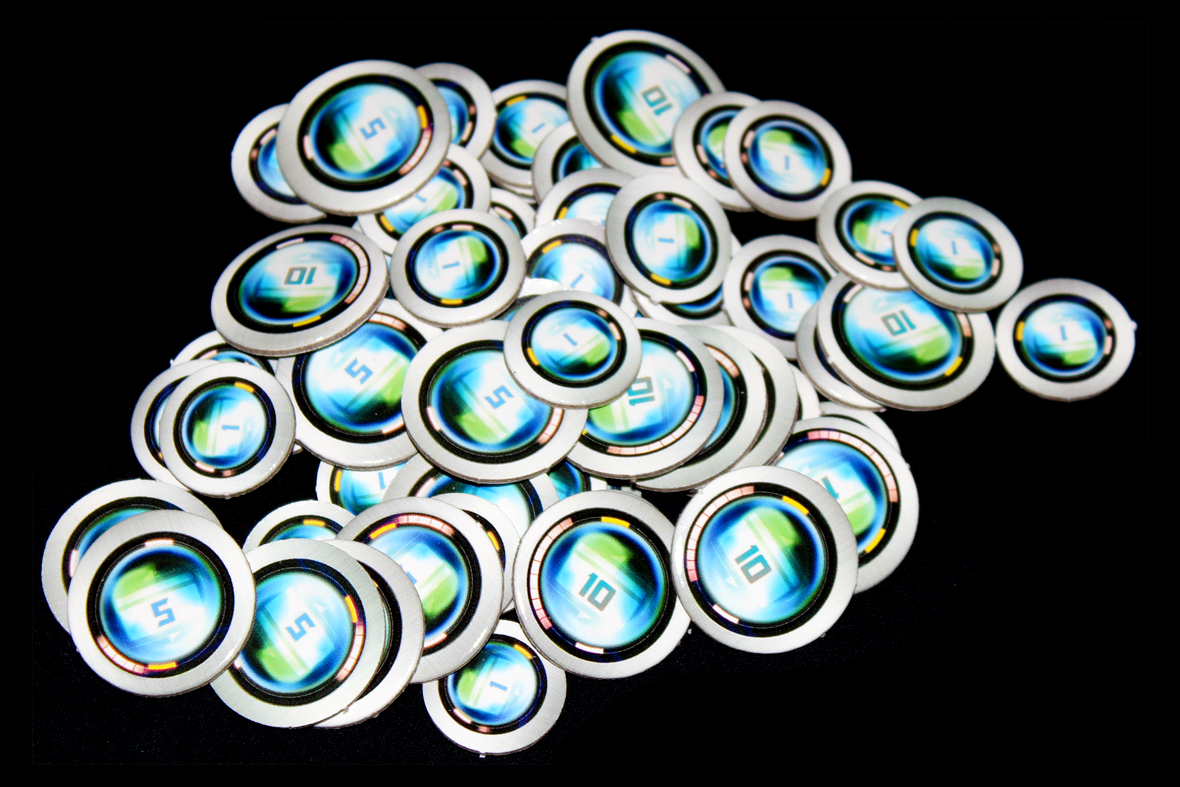 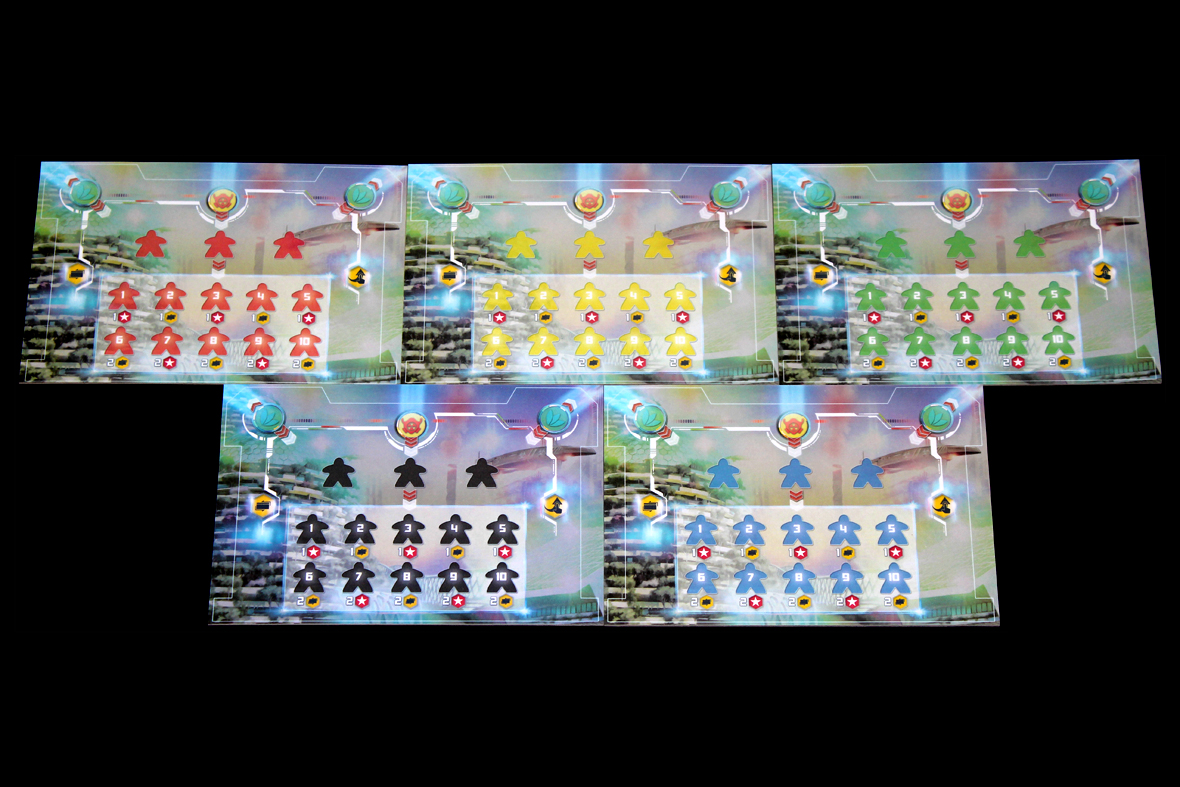 Give them meeples to match: 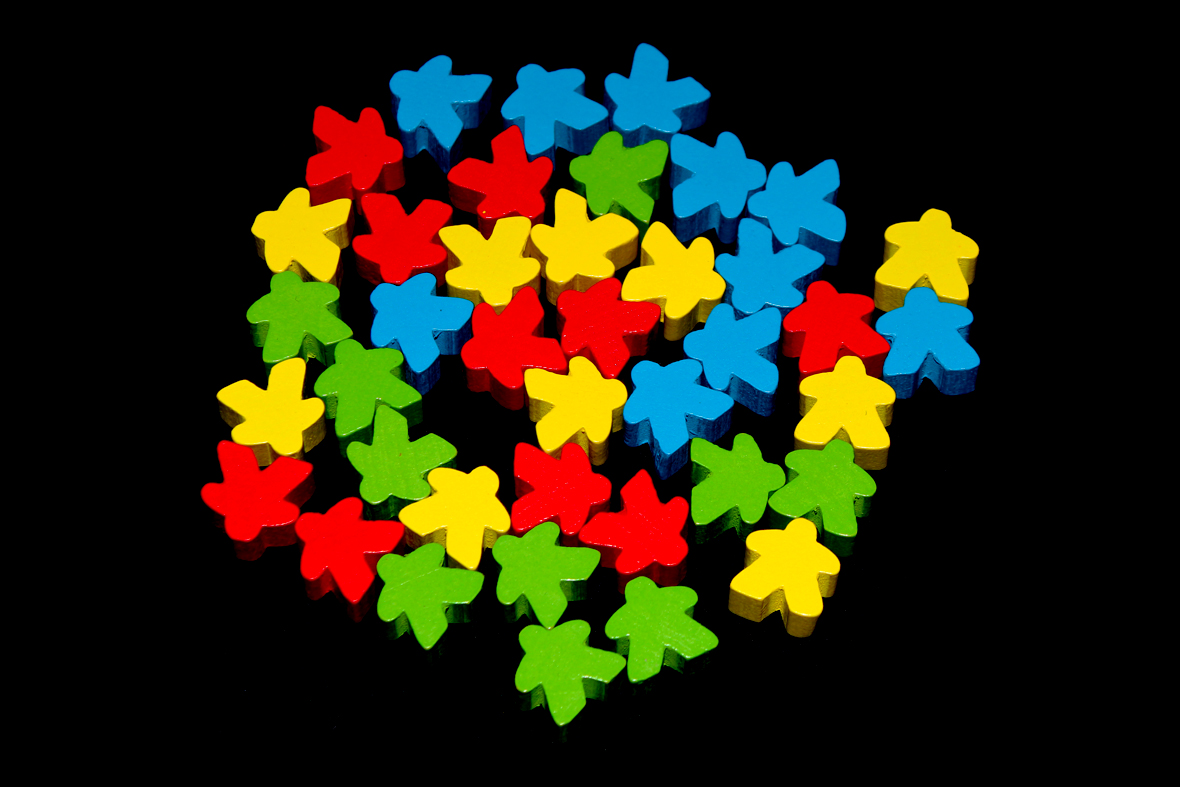 Once you’ve done that, you should be ready to start! 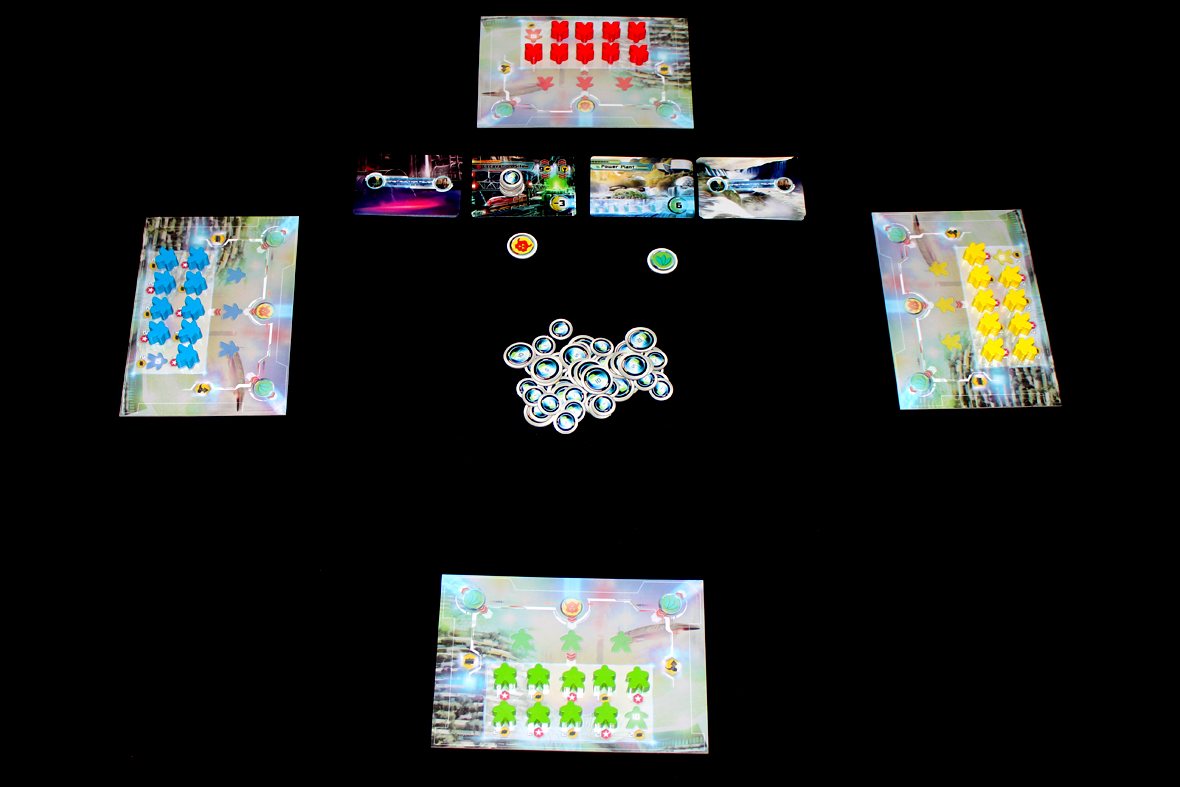 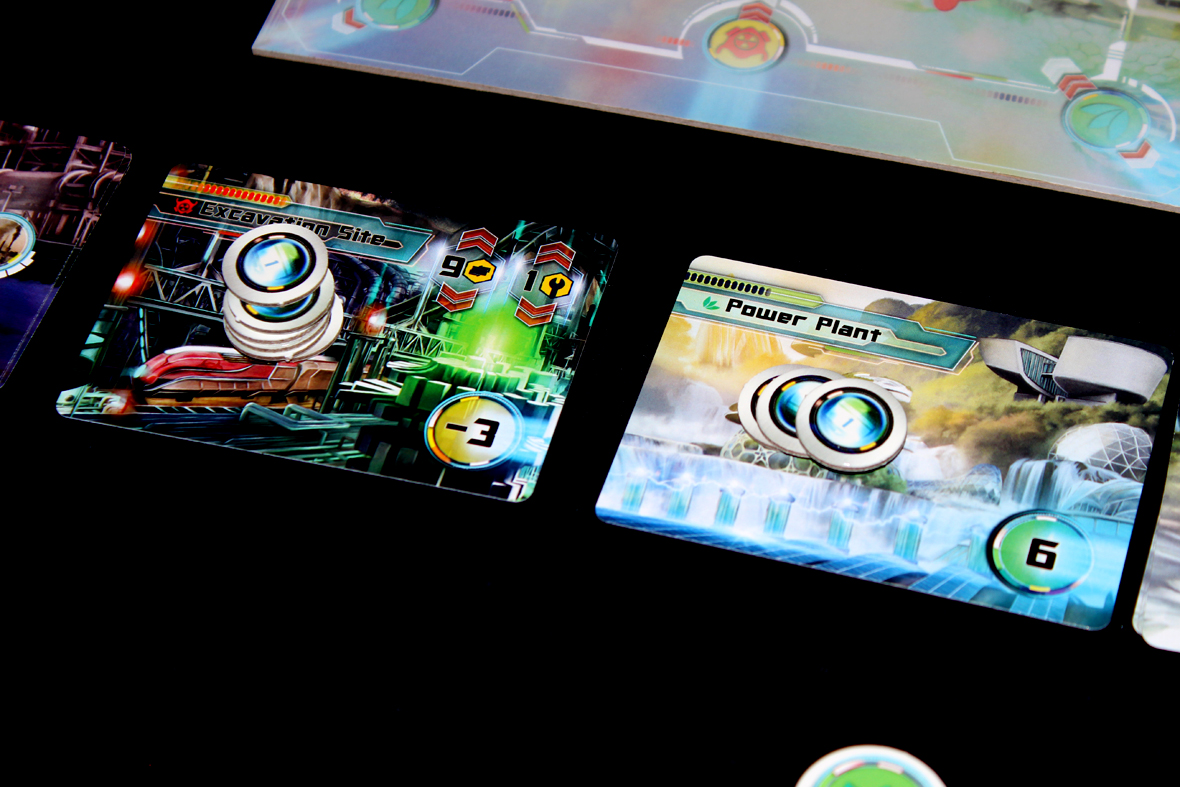 A game of Construction Fever is played over 10 rounds. During each, players will bid on highly-profitable but suspect black projects, and less profitable but better-for-your-image green projects. Balancing both is important, but at the end of the day the player with the most money (usually) wins.

Now, the start player reveals a black project and a green project, placing the project markers below them. Put credits equal to the black project’s value (top right; not the meeple counter) on the project. Then, each player takes turns until the round ends.

On a turn, a player will either bid or pass. If you pass, you’re still allowed to bid on your next turn. A round ends if all players consecutively pass. If you currently hold a Project Marker of any color, you must pass, on your turn. 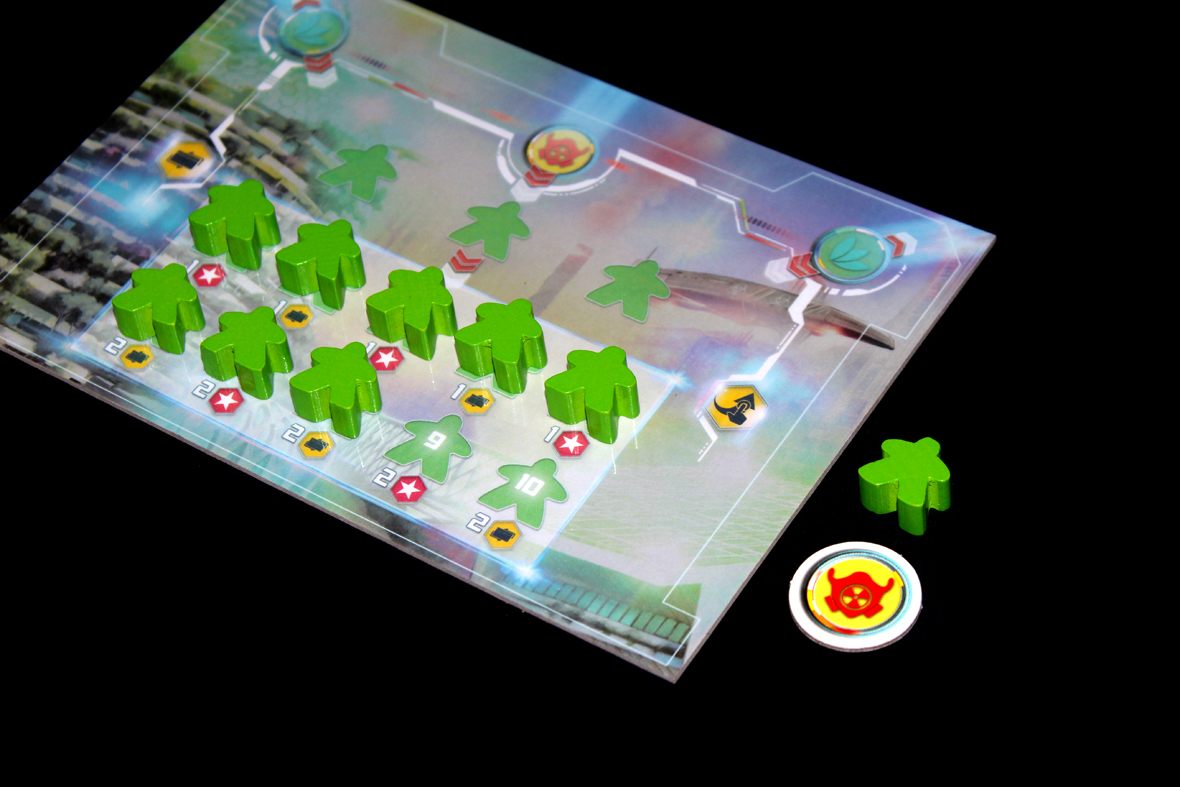 If you choose to bid, you may bid one of two ways:

Once every player passes, the bids are won by the players currently holding the Project Markers. If a project has no bids, it’s discarded to the box along with any credits currently on it. 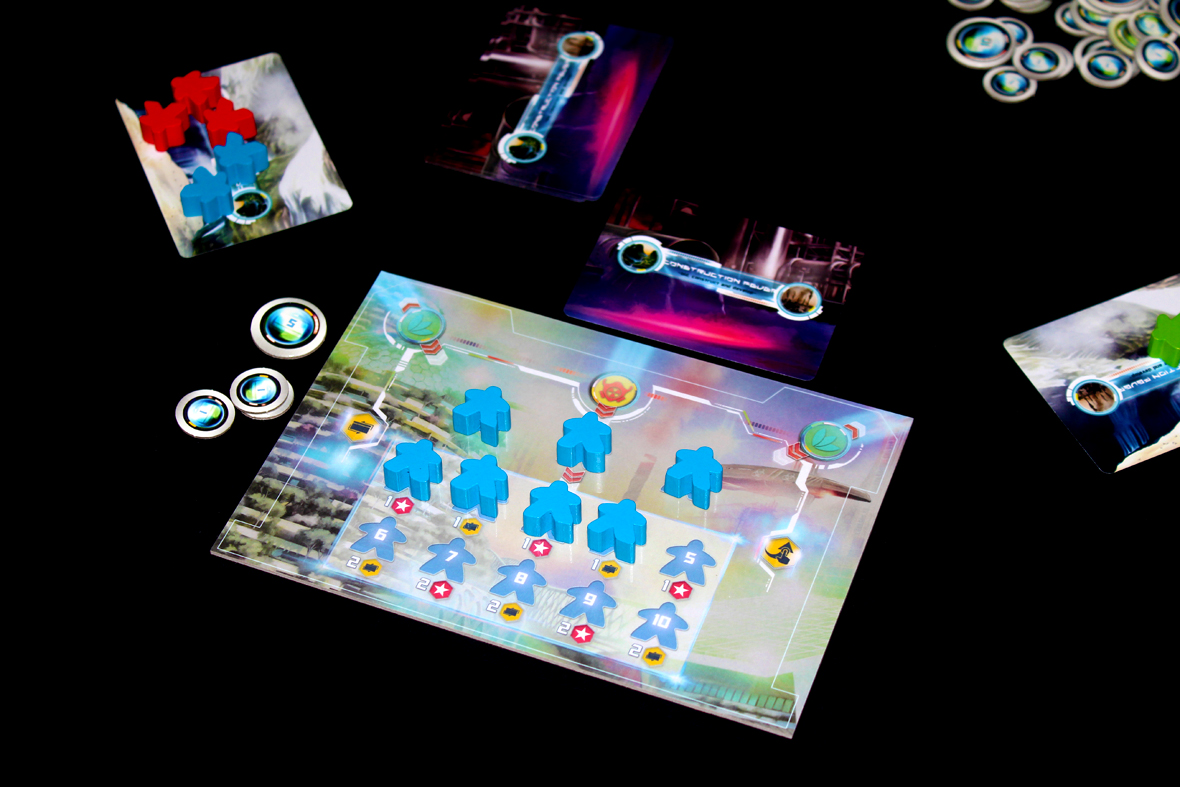 For a black project, flip the card over, add the credits to your supply, and place the meeples you bid on top of the black project card and place it in front of your player board. 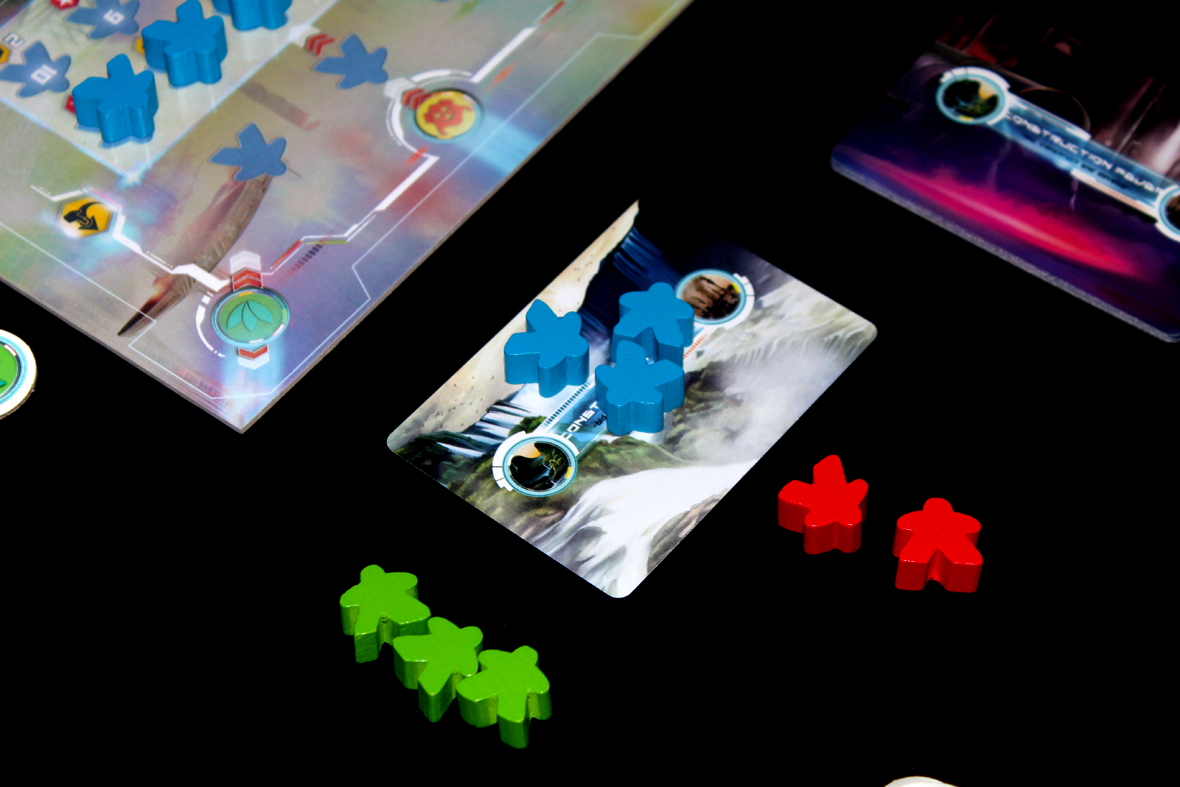 For a green project, you will enlist help from other players. Do the same thing (flip the card over, place your meeples on top of it, and add the credits to your supply), but now the players to your left and right will take their meeples from their board and secretly place a number in their hand. Once both players are ready, reveal. The player who bid more meeples will help you on this project. If there’s a tie, the player on the left wins the bid. Slide your green project so it sits between you two, and they place their bid meeples onto the project card along with yours. Now you share the reputation bonus from the card (it’s not divided).

Finally, for each project (left green, black, right green) that has your meeples on it, you may move one to the resting zone on your player board.

Play continues with the player on the left of the player that started this round. 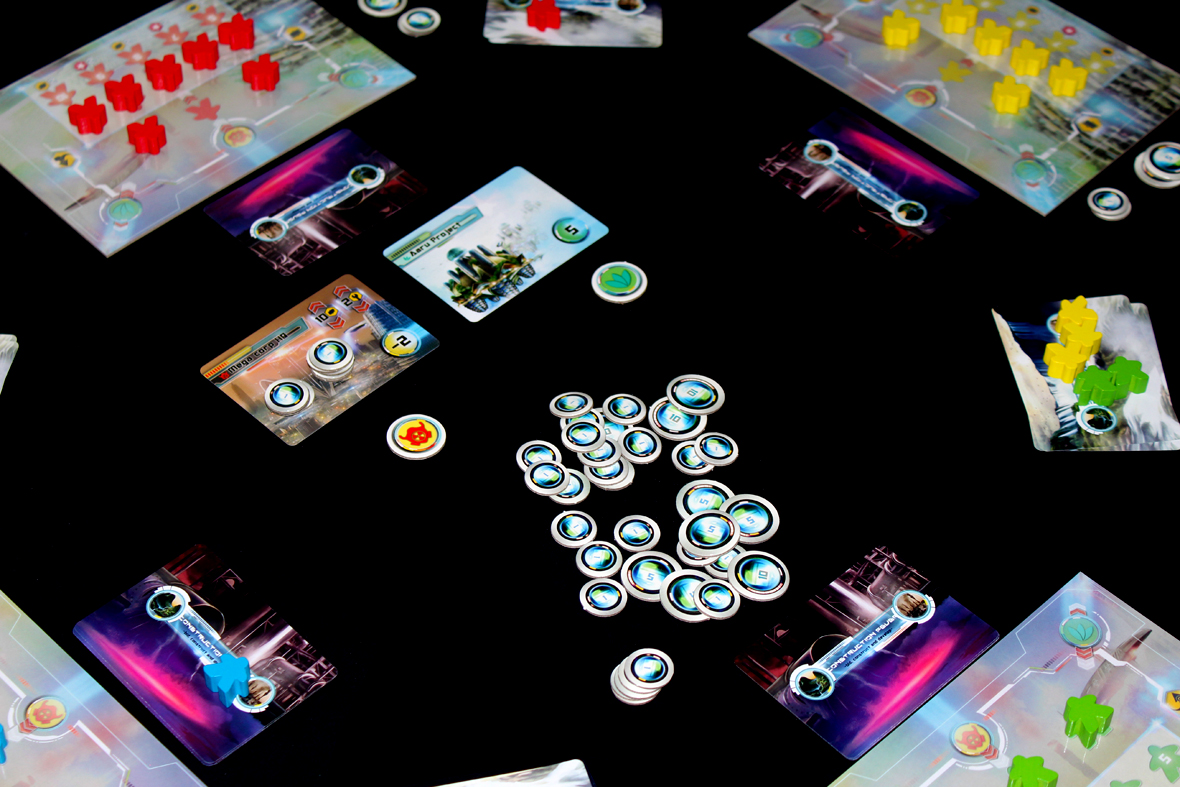 The player with the lowest reputation is eliminated. At five players, the bottom two are eliminated. If multiple players are tied for the lowest, eliminate none of them. That’s nice, at least.

All remaining players should add up their total credits (again, including bonus credits for meeples on their player board). The player with the most credits wins!

Weirdly, I actually prefer it at higher player counts than 3 — at three, there’s too much balancing happening for me, essentially. You’re either getting the green project or everyone else is, essentially, since it’s always split between two players. That makes the reputation thing a bit less interesting; you basically never want to take the high-reputation-penalty cards. At higher player counts, it’s a bit harder to track who has what, since at four there’s always someone left out of the entire conversation around green projects, and at five it’s just a bit more chaotic. I think I’d recommend keeping the game to those player counts, personally. 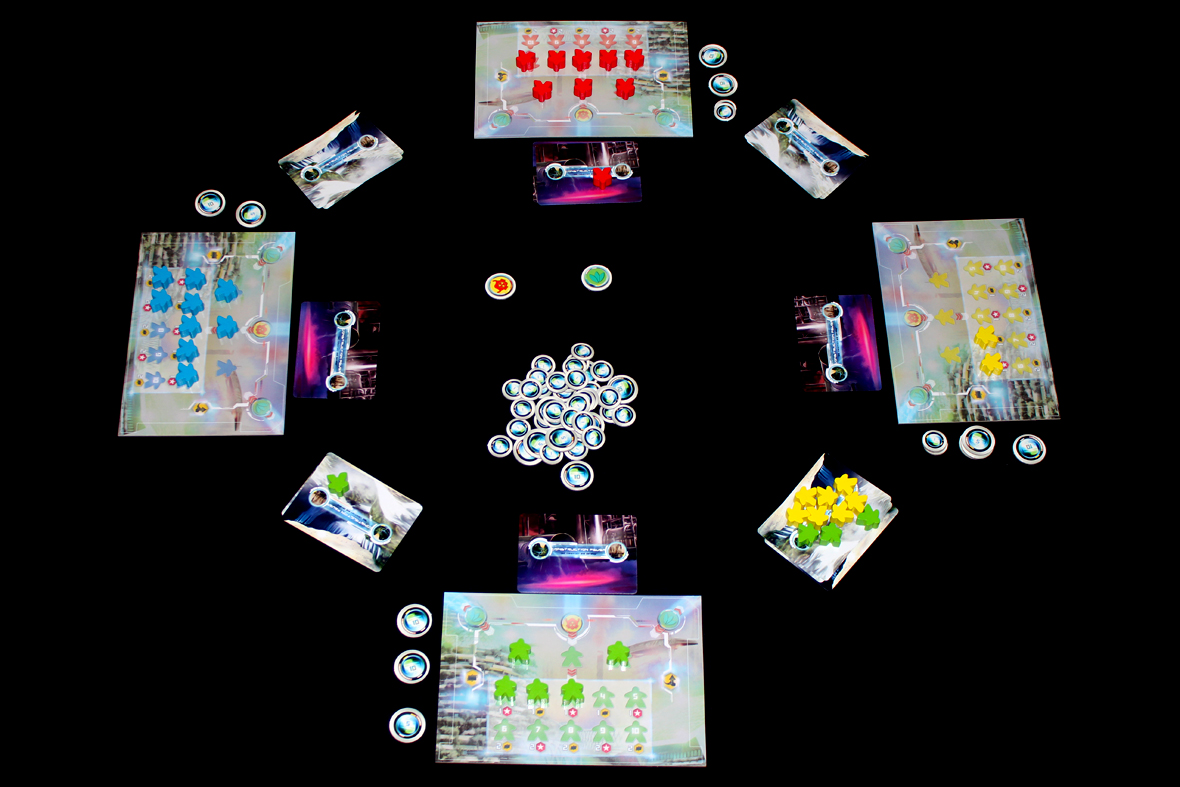 Overall, I’ve enjoyed Construction Fever! Like I said, I generally am not a huge fan of auction games, so it’s nice to see one that I like well enough pop up on my radar. To be fair, Ninja Star has made / published a bunch of games that I’ve enjoyed — Yokai Septet was a ton of fun, Sweets Stack is solid (and I still need to review it!), and, I mean, Wolf & Hound is delightful. It’s good that they’re changing it up with mechanics every time; all of those games are wildly different from both each other and Construction Fever. What I like about it is the multilayer auction system that goes with managing your reputation and how you work somewhat cooperatively with other players so that they can work on projects that you can also hop onto. The whole thing is very nice. Add in a nice ramp for potential expansion content and you’ve got yourself a solid Kickstarter title. I’m interested to see what else gets added as the campaign progresses (although it’s getting tougher out there for Kickstarters). Either way, if you’ve wanted to live out your CEO dreams and occasionally develop some potentially shady projects, Construction Fever might just be the game for you!