Full disclosure: A review copy of Roll for the Galaxy: Rivalry was provided by Rio Grande Games.

And here’s why I dusted off the previous expansion for Roll for the Galaxy. Rivalry, an all-new fairly-big-box expansion from Rio Grande Games that adds a lot of new content. I’m always excited to check out Roll for the Galaxy content (it was one of my favorite games when I first got into board gaming), so let’s dig into it a bit more and see what’s going on?

In Rivalry, you’ve discovered something you didn’t even imagine possible: new orbs with intense upgrades. Now you can leverage this new technology to help expand your galactic empire even more quickly, provided you find the right people to explore it. Additionally, you’ve been invited to more and more summits on galaxy-wide trade, where people will look for new jobs, new opportunities, and new lands. Finally, Pioneers have made their way to your empire, and with them even more opportunities (even if they’re mostly novelties upon close inspection). How will these new changes affect your vision for the galaxy?

Setup remains somewhat similar to Ambition, but is split based on Orb Game or Deal Game (or both!). Regardless, you’ll have new tiles: 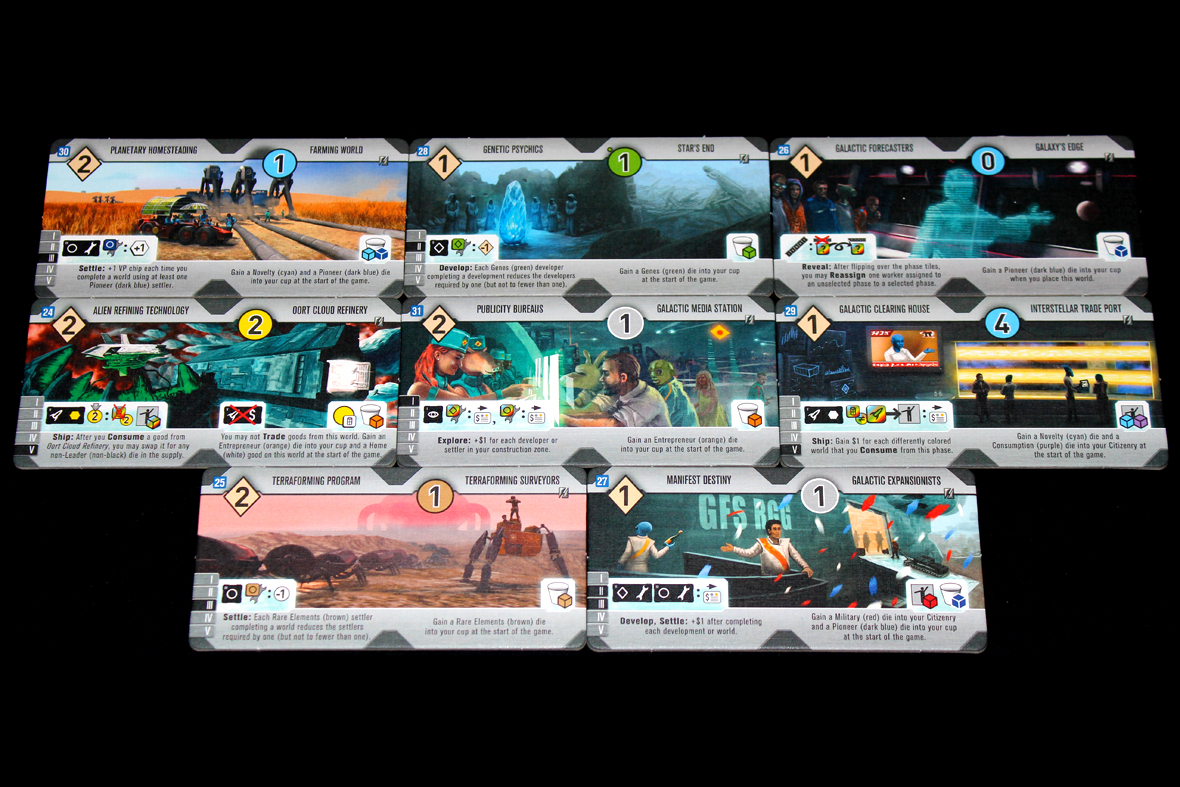 Shuffle those in with the rest of their stuff. Then, check out the new Pioneer Dice:

Rad. To compensate for all the new changes, everyone is getting new Player Screens:

Even larger! Along with new Phase Strips: 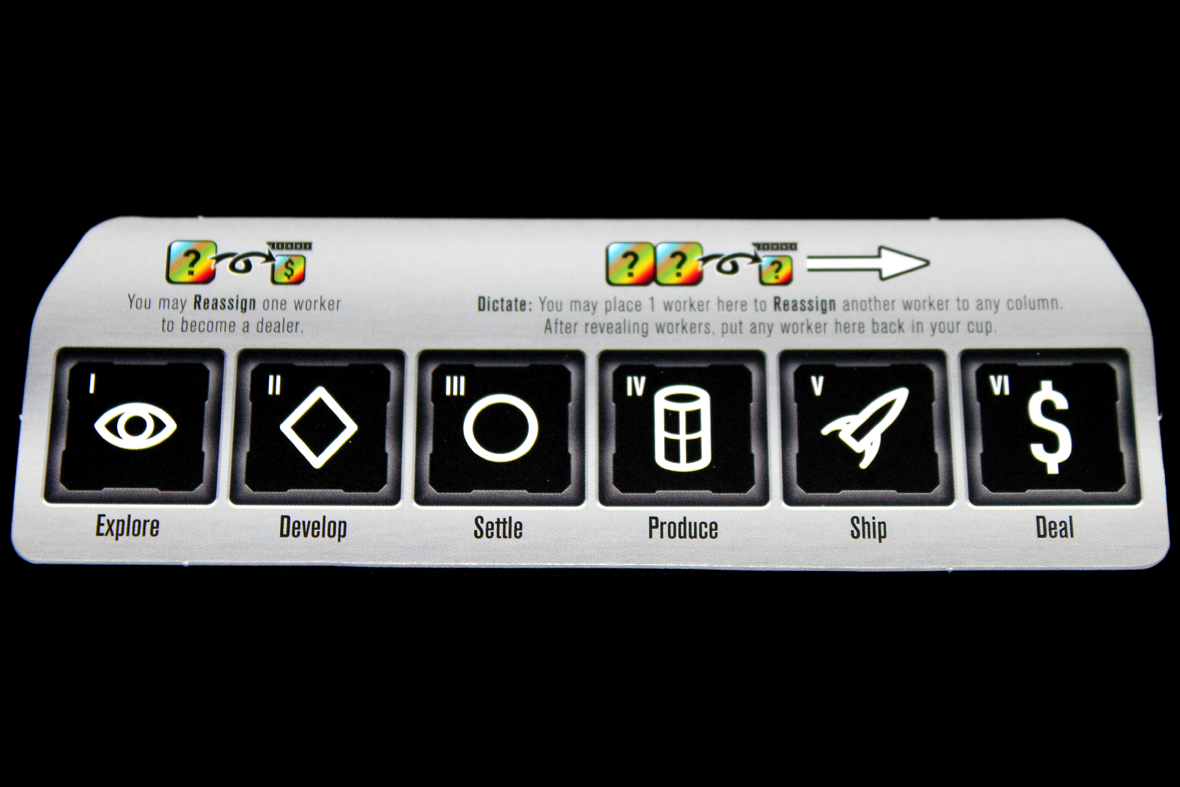 And a new Phase Tile, making for six total Phases: 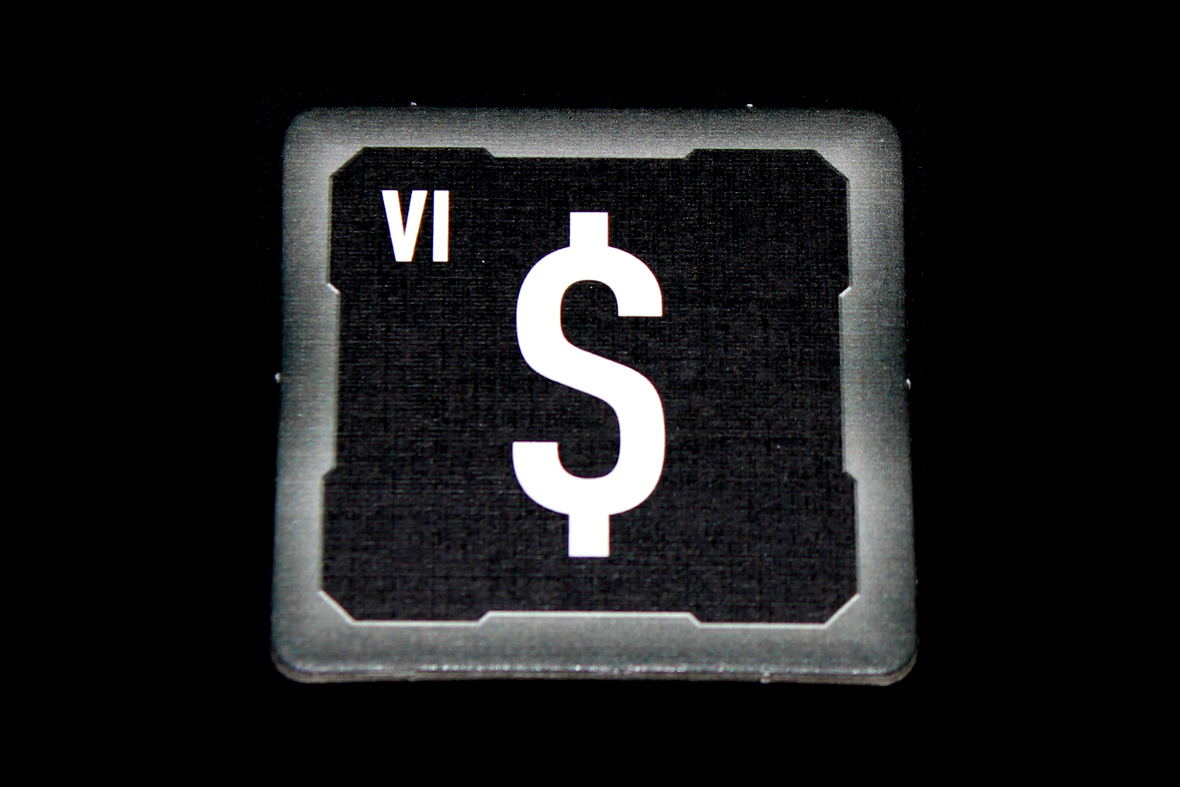 You’ll only use those in the new Games. So let’s talk about those:

For this one, you’ll want to use the yellow Orb Dice: 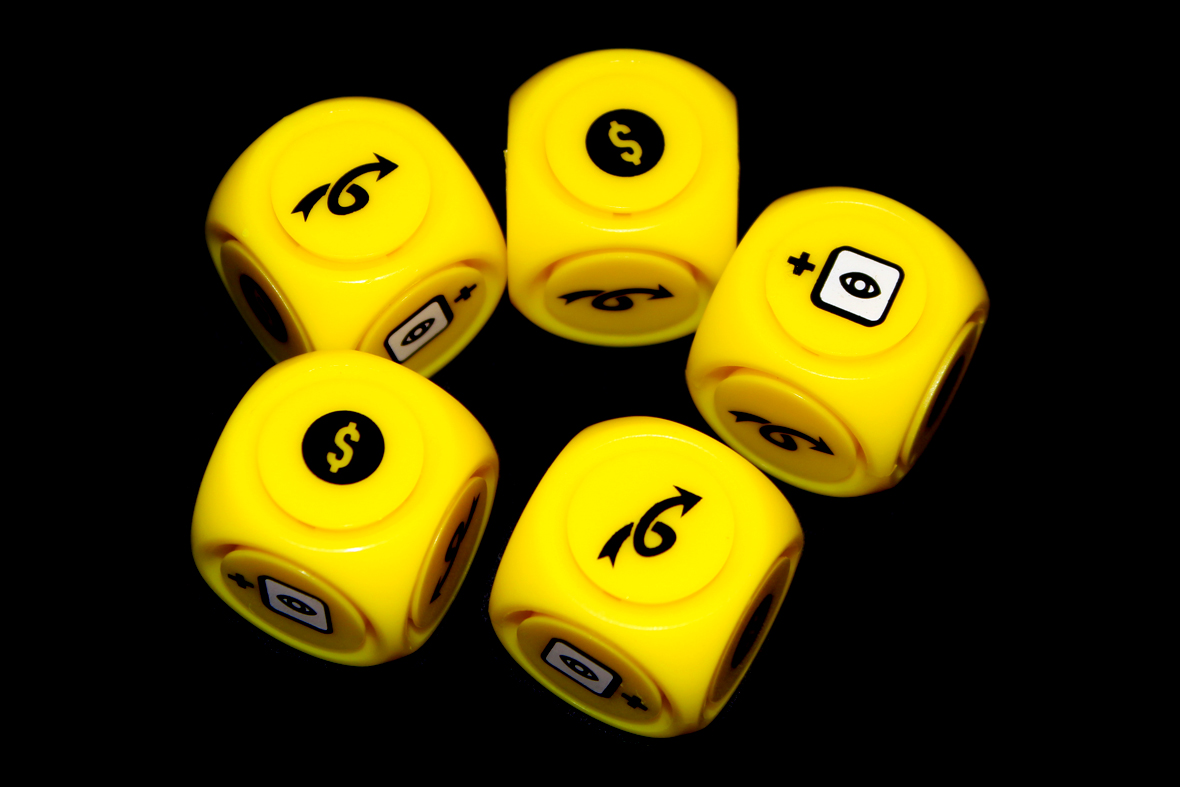 The picture above should show you which faces start where. They should all be yellow, though. Give each player a guide to what the faces do:

And you should be all ready to go! The only other change is put 15 VP per player in the Supply, rather than 12.

For this one, you’re going to want to get out the Deal Mat: 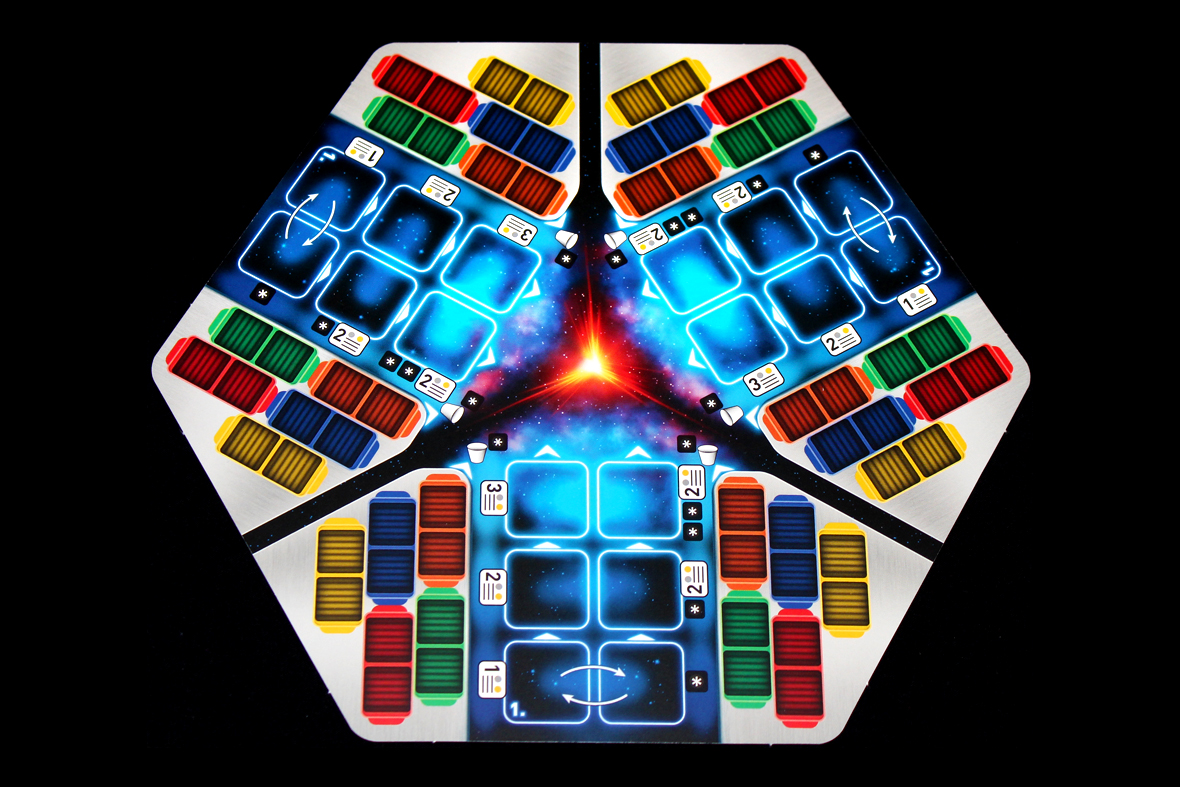 Put it in the center of the table along with the Deal Dice:

The black one is the Prestige Die. It’s a bit more special. You’ll also want to break out the priority track and player tokens:

Also set out the possible Deal Results, like the Treasury extension strips:

Also the Generic Worlds and Developments! 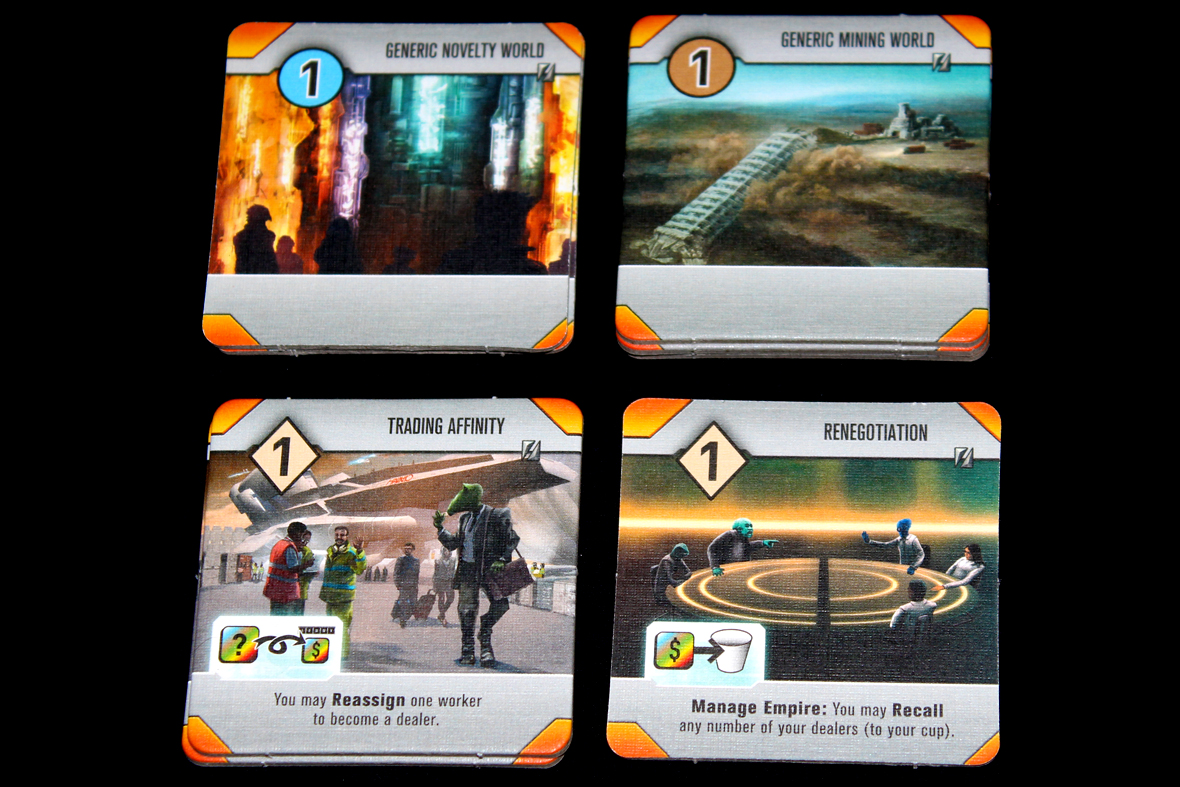 There are some extra tokens if you run out, as well. 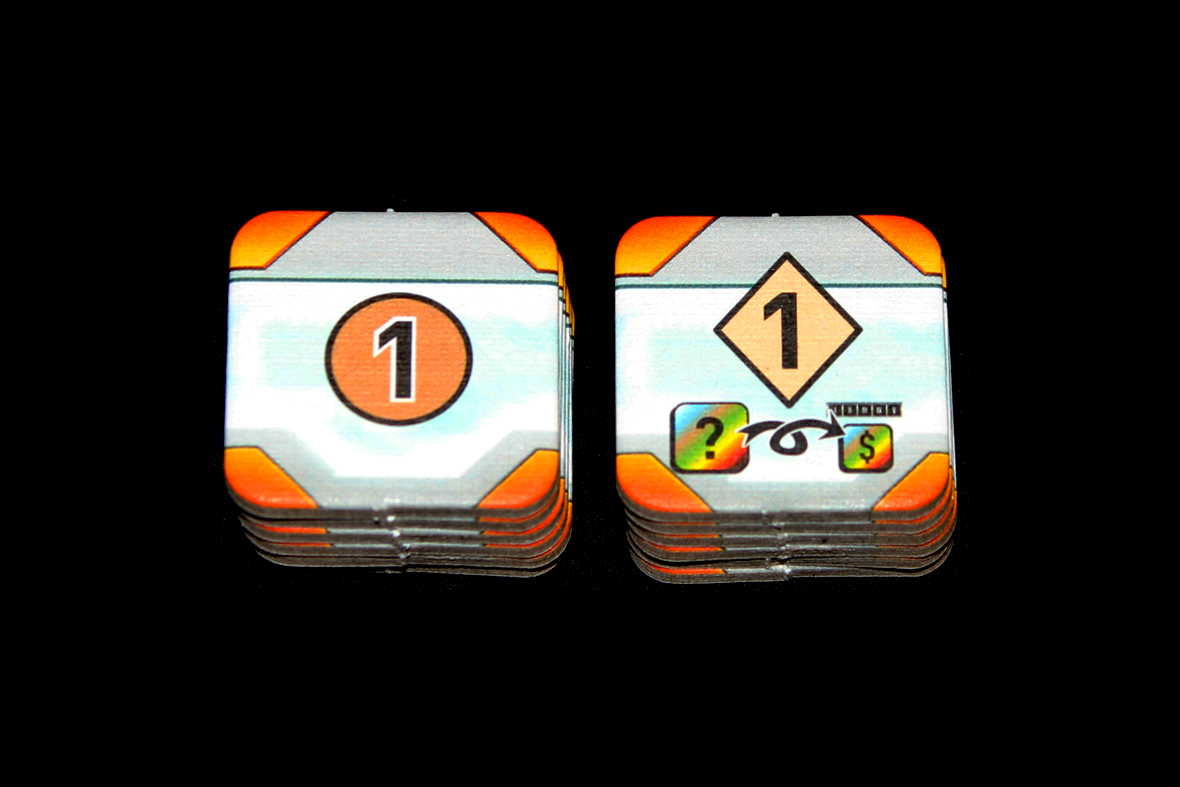 Once you’ve done that you’re ready to go! Give every player an Exchange Asset Guide, as well: 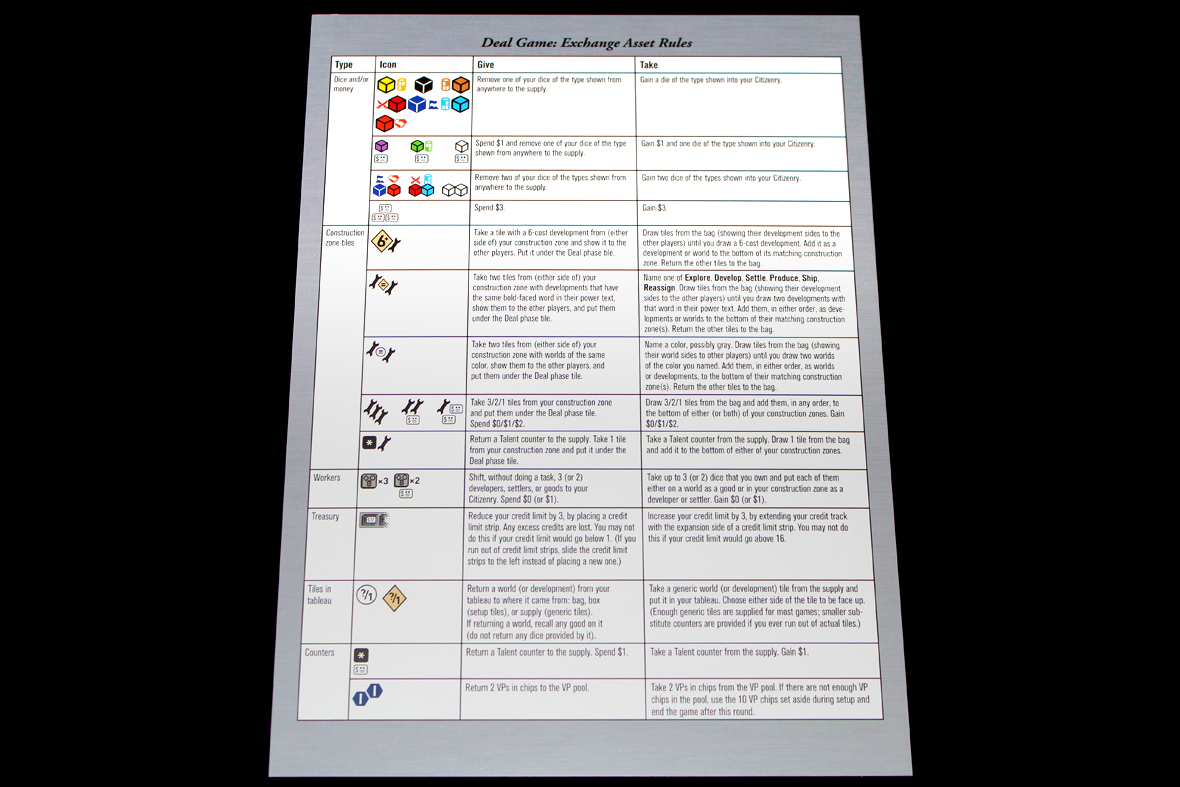 You can do both! Just do everything from both sections: 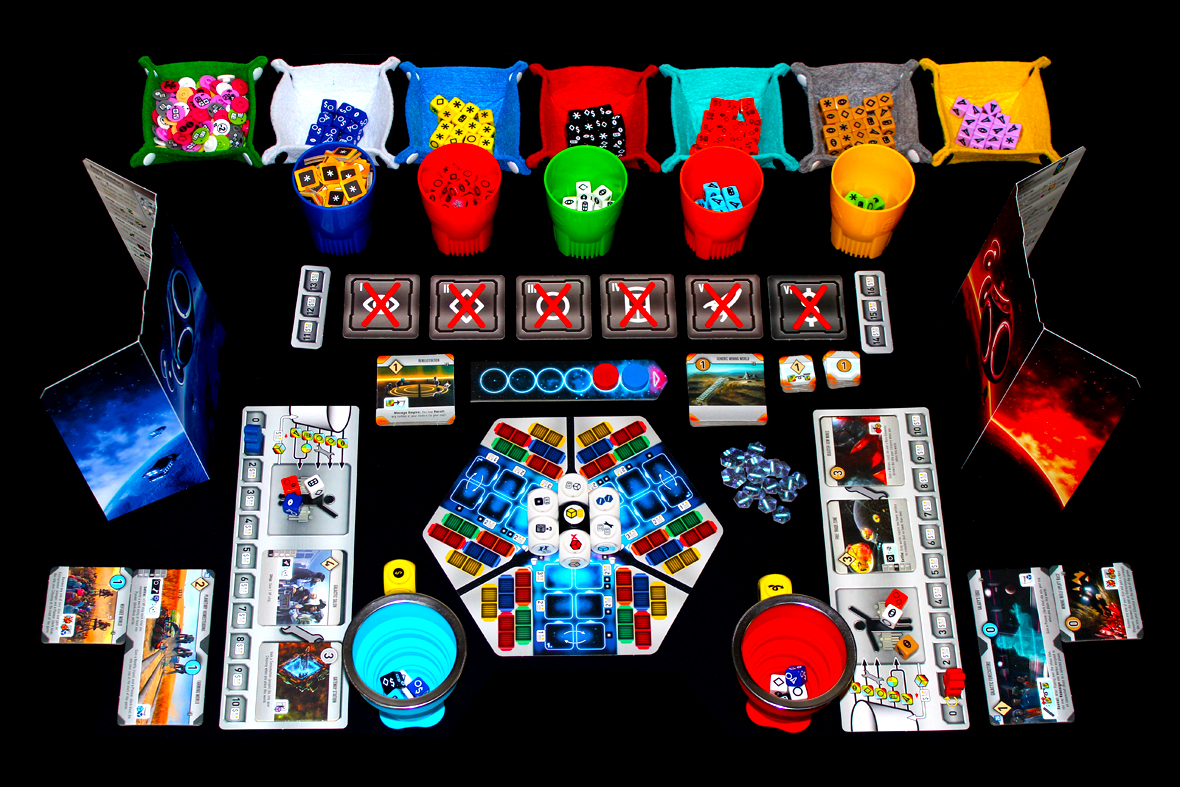 Alright, so, here’s how the games change. The basic game pretty much doesn’t, though there are a few alterations if you’re playing Deal or Orb:

Let’s dig into each mode.

During the Orb Game, in addition to the normal Roll for the Galaxy experience, you now roll the Orb die at the beginning of each round in front of your screen. This can give you a variety of effects, with some even allowing you to automatically upgrade your Orb.

To help balance the game length, there are now 15VPs per player in the Supply and a player needs 15 tiles in their tableau to end the game.

The sixth phase is now known as the Research Phase, and dice assigned to this phase become Researchers. Researchers give you upgrade points that you can use on your Orb Die.

As you play through the game, you’ll upgrade your Orb Die; should you run out of faces, they’ve added a Clone Face that you can place to clone another face’s effect, which is nice.

The Deal Game is pretty neat, honestly. In this, players can propose bounded trades that mature in value and ultimately expire. However, the trades only close if you can find someone to meet you halfway.

Every round, before you assign dice to phases, roll the unused Deal Dice and place them in the center of the board.

Workers assigned to this phase are Dealers. When you use one, you may join a deal or create a new deal. You may also refuse to participate in the deal, which just has you return the dealer to your Citizenry and gain 1 money.

Join a deal by putting your dealers on either the left or right side of a deal. If you have deal dice showing X and Y, and you join on the left, you return X to the supply to gain Y, generally speaking, and vice-versa if you join on the right. If one of the dice is the Prestige Die, this changes: if you’re gaining from the Prestige Die, you must spend one money; if you’re spending the value on the Prestige Die, you gain one money. So that’s fun. Note that you do this every time you assign a Dealer to the left or right sides; you do not need another die on the other side to make this work.

If you’re creating a deal, you must follow player order. Move your token on the priority track to the back of the track and slide all the tokens up to fill the space. Now, create a deal by selecting two of the Deal Dice and placing them on one set of the empty column spaces. You may then participate in either side of the deal. If no sets of spaces are open, you cannot create a deal; you must join an existing deal or refuse to deal.

Note that if you go down to 0 money after using a die in this phase, you immediately go back up to 1 money, just like during the Manage Empire step.

After the deals have taken place, you may close any completed deals. A deal is considered complete if there are equal numbers of dice on both sides of the deal. When a deal is closed, dealers are returned to the Citizenry and players gain rewards on their side of the column for every dealer on that side of the column. If the deal is not closed, they advance one space towards the center after the Manage Empire Step. If the deal dice are already on the third space, they are returned to the center and players gain one Talent Counter for each die they had on either side of the deal. The dealers are then, unlike after a successful close, returned to the cups of their respective players; the deal was not closed successfully. This doesn’t mean you have to exchange assets back, though.

Once the game ends, return dealers on unexpired deals to your cup, for tie-breaker reasons, if you do that sort of thing.

The only real change here is that dice assigned to the $ phase can be Dealers or Researchers; your call. There are some ordering things that need to be noted:

Lots! One thing you’ll notice is that the Home Die from the two-player game has been upgraded to a Leader Die if you’re playing with any of the expansion content games, so you’ll see the Deal and Research Phases activate a fair bit. Note that you probably won’t see that happen in a three-player game, at least not initially; players, as far as I can tell, are somewhat reluctant to forego strategies that they already know well, so unless someone can prove to them that aggressively pushing the $ Phase will work in their favor, they won’t really use it that much. At higher player counts, you may see people start trying to use the $ Phase to benefit themselves, relying on other players to force phases that they specifically need. That’s to be expected, but it means right around 3P is where you’re going to see that $ used the least, in my opinion, until every player gets a fair bit of experience with it (which doesn’t happen a lot with the expansions I tend to play with). I’d say start at higher or lower player counts until you’re comfortable with the new additions, and then bring it back around to three players if that’s your preferred number. That’s been what we’ve been noticing with my play groups, at least. It’s not bad at three; you’re just much less likely to see the full spectrum of expansion content until all three players really intuitively understand how to play the game, which can be a while.

So here’s the thing. I like Rivalry a lot, and I’m probably going to start using it from now on. The reason it’s not surging up my list of expansions really comes down to its weight for new players. It’s kind of heavier Roll for the Galaxy; it can extend the game, it adds extra phases, the phases are a lot to learn, and even then the game can be (and until this point was) pretty effectively played without them. Some of the disappointment you get with new players is that the phases feel a bit inessential. That said, that’s a problem that gets solved after multiple plays, as players figure out how to leverage those new phases to create new strategies and they figure out what to do with the new tiles and the new dice and the new interactions. The problem is, a lot of expansions have to start strong out of the gate, whereas I think this one needs a bit more time to heat up before you start seeing its true nature. Whether or not you’ll wait that long is up to you, but I’ll say I certainly enjoyed Roll for the Galaxy: Rivalry, and I’d definitely recommend it if you’re a big Roll for the Galaxy fan!