Full disclosure: A preview copy of Fickle was provided by BARD Games. Some art, gameplay, or other aspects of the game may change between this preview and the fulfillment of the Kickstarter, should it fund, as this is a preview of a currently unreleased game.

To celebrate hitting a million words on my site last week, I’ve teamed up with KOSMOS to give away some games from the EXIT series! Check out the giveaway for more details.

More Kickstarters, this week! I’m excited to see what’s coming down the pipeline from Ninja Star, and I hear next week we’ve got the new Button Shy and a new game from the designers of Assembly. Lots to do! Lots going on. Right now, we have Fickle to talk about, a game from a local designer (always exciting). Let’s dive right into that and see what’s up.

In Fickle, you are forming a fairy alliance! It’s fairly difficult, as you might imagine, because the fairies are so … capricious? Mercurial? One of those words. Even the fairy families you’re considering inviting to your alliance can change game-to-game; it’s a lot. Will you be able to unite these fairies under your wise leadership? Or will these friendly fairies frustrate you?

Not a ton, here, which I appreciate. You can turn the board to the learning side or the Moon Crown side:

The Moon Crown doesn’t explain the rounds. Useful for experienced players. If you’re using the learning side, you can also use these tokens to track the phases:

Pick five sets of fairy families to use in this game:

They’re modular, so, there are some recommended sets, but kinda knock yourself out. Go wild. I like Pariah a lot, but it keeps the scores pretty low. Shuffle the round tokens and place five face-down on the board:

Shuffle the 45 cards you chose and deal each player three.

Of those three, each player keeps two and places the other face-down in a discard pile. Reveal the ones you kept; those will form your starting alliance. Flip the first round token and you’re ready to start!

Gameplay’s not too bad! The game takes place over five rounds, each with their own phases.

To start a round, flip the topmost unflipped Round Token face-up. That tells you what direction cards are passed this round. Flip the Start Player token to match it. Also, if any cards have Delayed Effects (there don’t seem to be any in my version, though; stretch goals?), they’ll resolve now.

Now, the lineup begins, and this is half the crux of the game. Every player draws three cards, and stacks them in any order they’d like (after looking at them, of course). Pass the stack of three cards in the direction indicated by the round token. Your left or right opponent will get your stack.

When you receive a stack, you may Keep or Dismiss (Discard) one card at a time. You cannot look at all the cards; you flip the top one, and keep it or throw it away, face-down. If you keep a card, discard the other cards you didn’t look at yet face-down. Sorry, you don’t get to know. This can happen simultaneously and asynchronously, so players shouldn’t have to wait much.

Once every player has a fairy that they’ve kept, reveal and resolve. When you resolve, start with the highest-value fairy (typically 5) and go down to 1 (or -5, Pariah). If there are ties, resolve them via the player who has the Start Player token and go in the direction of the round. The kicker, here, is that certain cards can take or pass cards, and the card you played is eligible for that. Once a card has been used, it becomes inactive and gets added to your alliance (typically turn the card sideways until the end of the round). If it hasn’t been used, however, and someone steals it, they get to use the card when its number comes up. Rough.

After the last player resolves their card, give them the Start Player token. If it’s the fifth round, move on to scoring; otherwise, play continues with the next round! 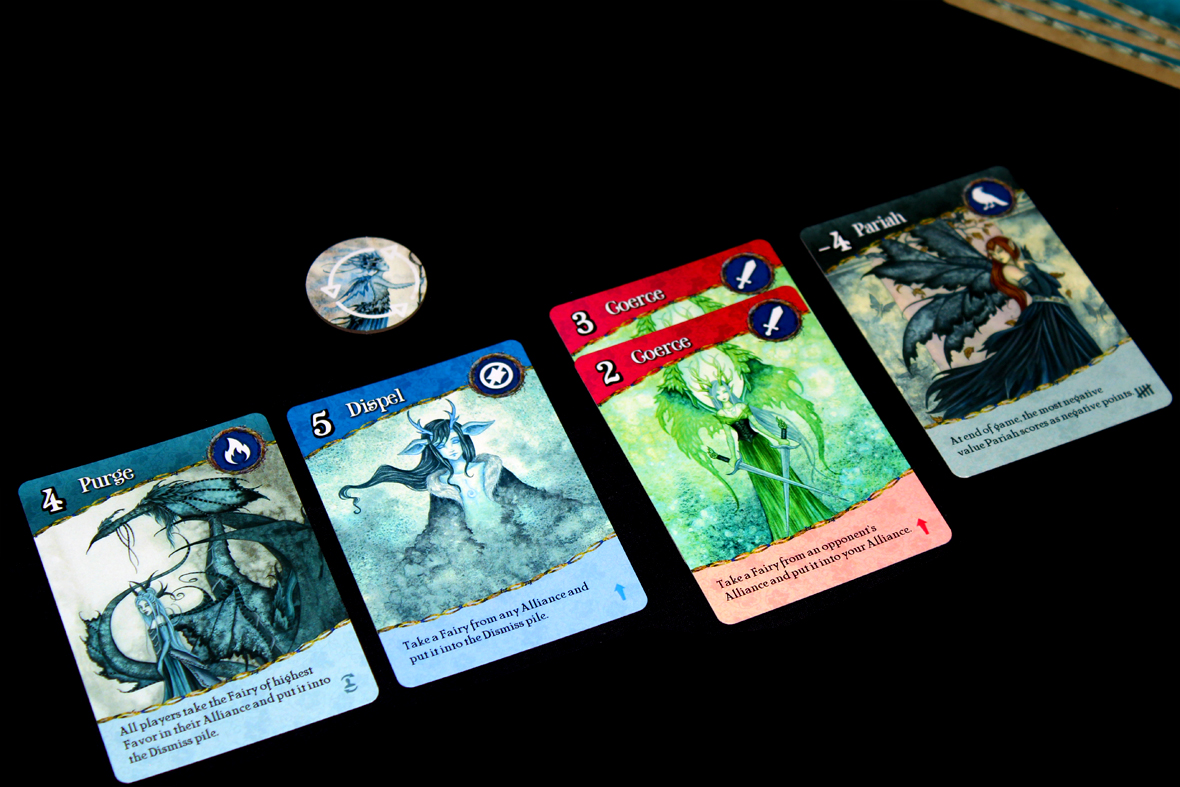 Scoring is a bit interesting, so let’s dig into that a bit more. At the end of the game, you’ll have a tableau (your alliance) of fairies. Depending on how many cards you have of each family, they score points:

Count scores and the player with the most points wins!

At higher player counts there’s a bit less control and it becomes almost a bit more party-game-esque. One benefit is that there are more fairies in more alliances, so cards that can target other players will help you (and you may want to use them to target players you can’t influence). One drawback is, yeah, you have influence over two players regardless of the player count (so you can’t influence one or two people at higher player counts), and it’s decently likely those players will all team up against you, so, be careful. The nice thing is that the playtime doesn’t really increase that much (most play is simultaneous; not all), so it can scale pretty easily. You just need to pick the right modules for higher player counts, I think. To that end, I don’t really have a strong player count preference. 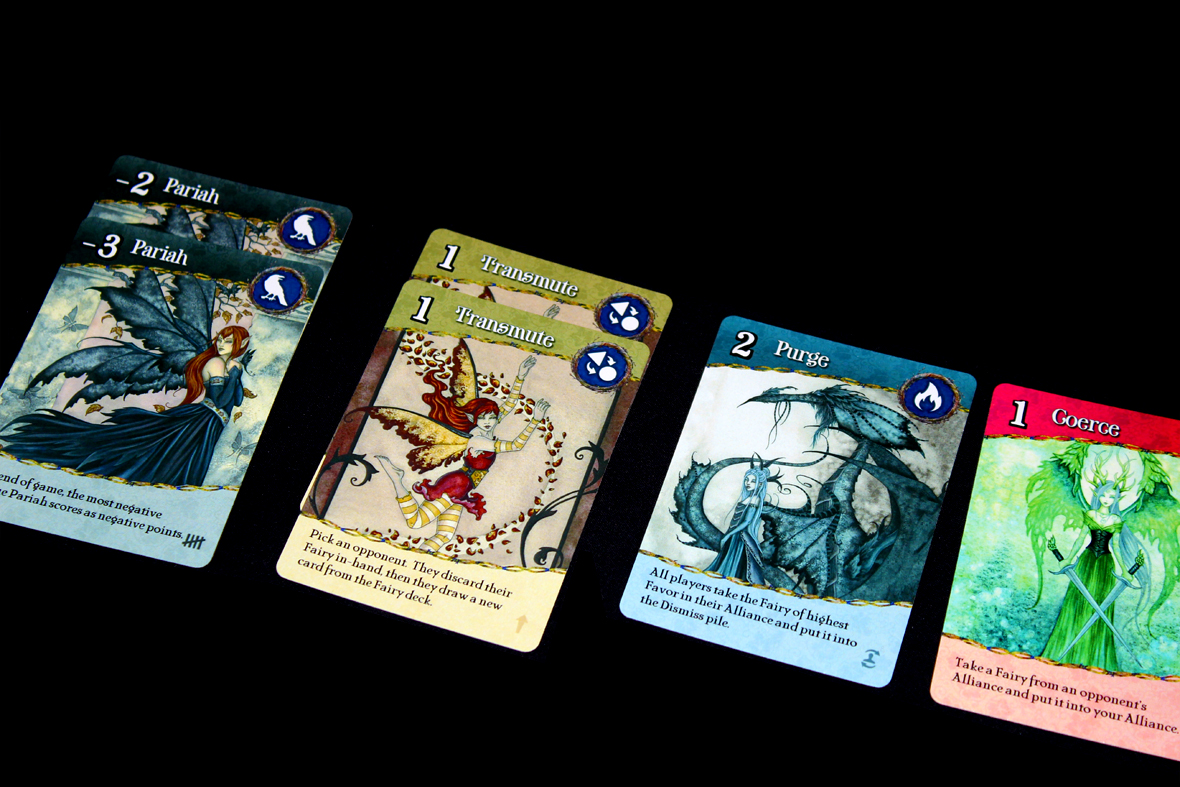 Overall, yeah, I was really pleasantly surprised by Fickle! When I first played it, I was like “oh, this is pleasantly novel”, but digging more into the different modules, well, there’s quite a neat little game, here! I’m always a big fan of modular games, so that helps. I love the subterfuge element of getting to choose the order of the cards your opponent gets to see and then the suspicion that follows; it’s a blast! I definitely yelled “oh no, you goofed me” at a player because they buried the worst card on the bottom and I skipped the second card, which was decently good, so I got … well, I got goofed. Add in some nice art and you’d have a pretty good game, but any game that can be played this fast is automatically going to get some points from me; I love fast games. It’s also super easy to teach, making it a really interesting modular filler, sort of similar to what Trickster does for trick-taking games, this does for light set collection (I mean, it’s almost a spin on Sushi Go Party! with more take-that and an I-cut-you-choose element in lieu of drafting, if you wanted to be particularly reductive about it). Anyways, I definitely underestimated Fickle and was surprised; I really enjoyed playing it, so hopefully if you give it a shot, you will too?