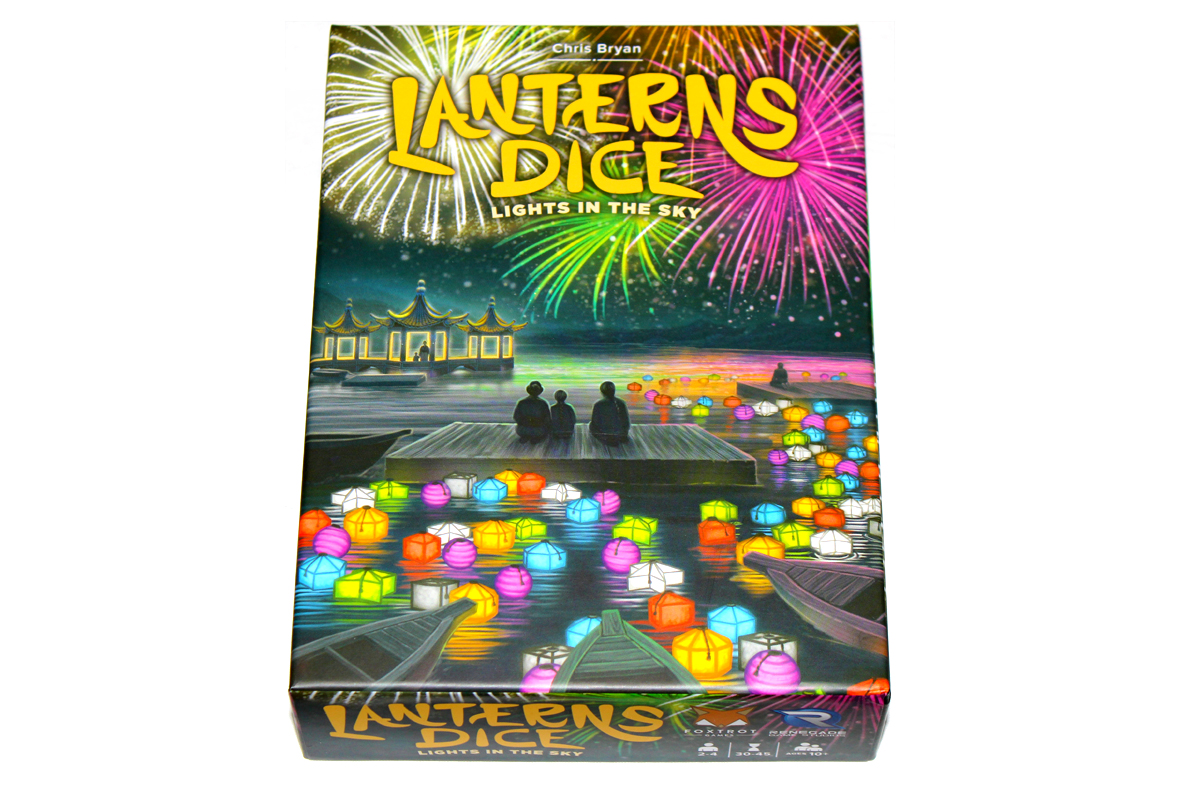 Full disclosure: A review copy of Lanterns Dice: Lights in the Sky was provided by Renegade Game Studios.

Alright, I’ve been really into these “themed” months that I keep accidentally doing when I’m trying to organize up my review queue for any given period of time, so, I figure, why not just lean into it? As you (hopefully?) noticed, I pushed Tussie Mussie’s review Monday ahead of its Kickstarter, so we’re rolling through Button Shy month (very exciting), but also, to my great delight, I’ve got enough roll and write games handy that we can power through a few weeks of those reviews, too! I mean, Hex Roller deserved to be on the list as well, but it came out last month so I wanted to make sure I got that review out the door. Or at the very least dicey games. Let’s do that. Anyways, Renegade is coming up with another one, Lanterns Dice: Lights in the Sky, so let’s check it out, shall we?

Setup isn’t too bad. You’re going to want to set out the Emperor Cards: 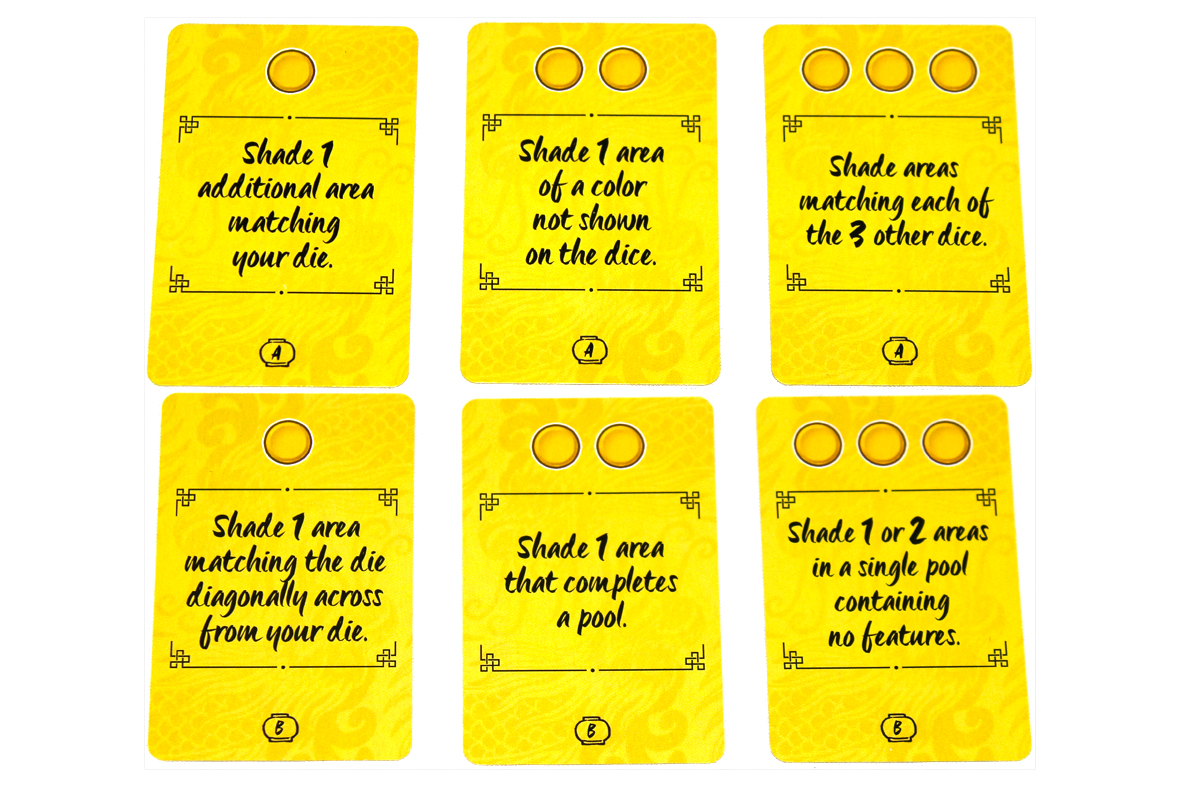 Use the A side for your first game, and then mix it up. Also set out four sets of tiles: 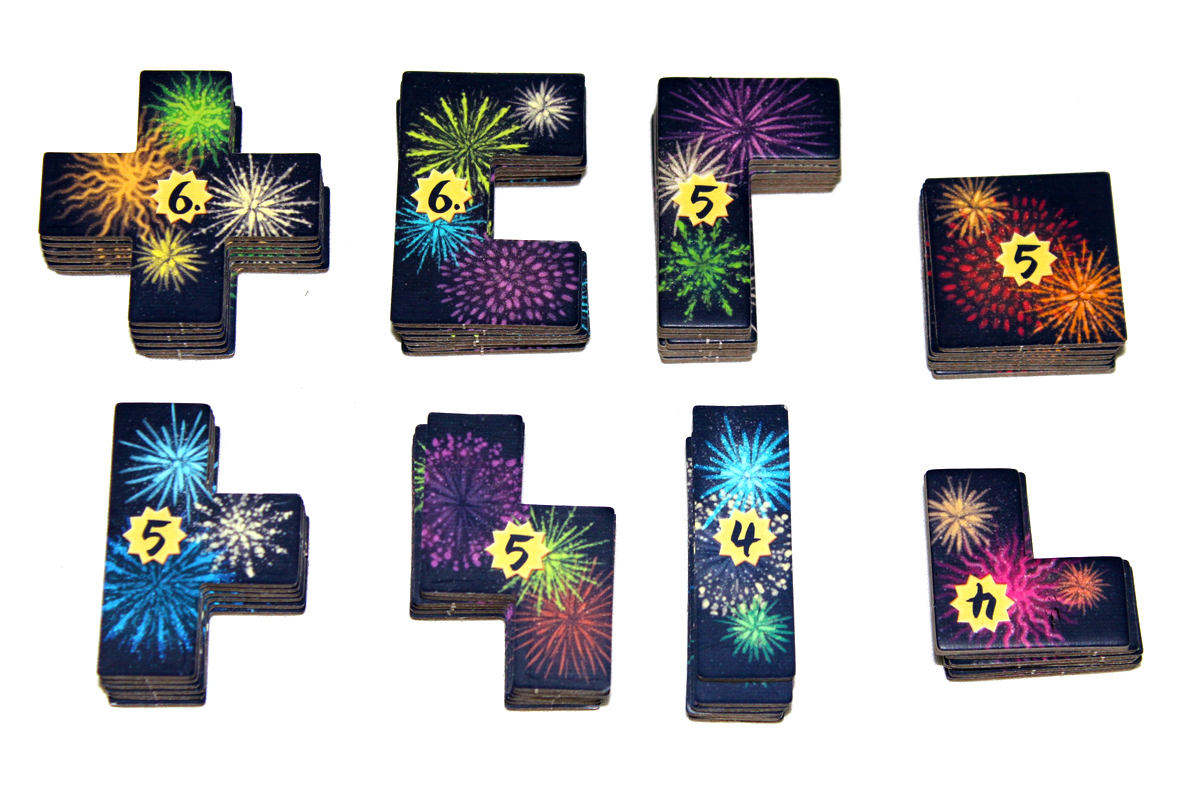 Use the 3-square angle, the 4-square, the 4-t, and the 5-u for your first game; again, mix it up on subsequent games, but they recommend 1 3-square shape, 2 4-square shapes, and 1 5-square shape. Place the tiles chosen into stacks based on their shapes, and then sort them from largest to smallest (largest number on top).

Give each player a different scoresheet: 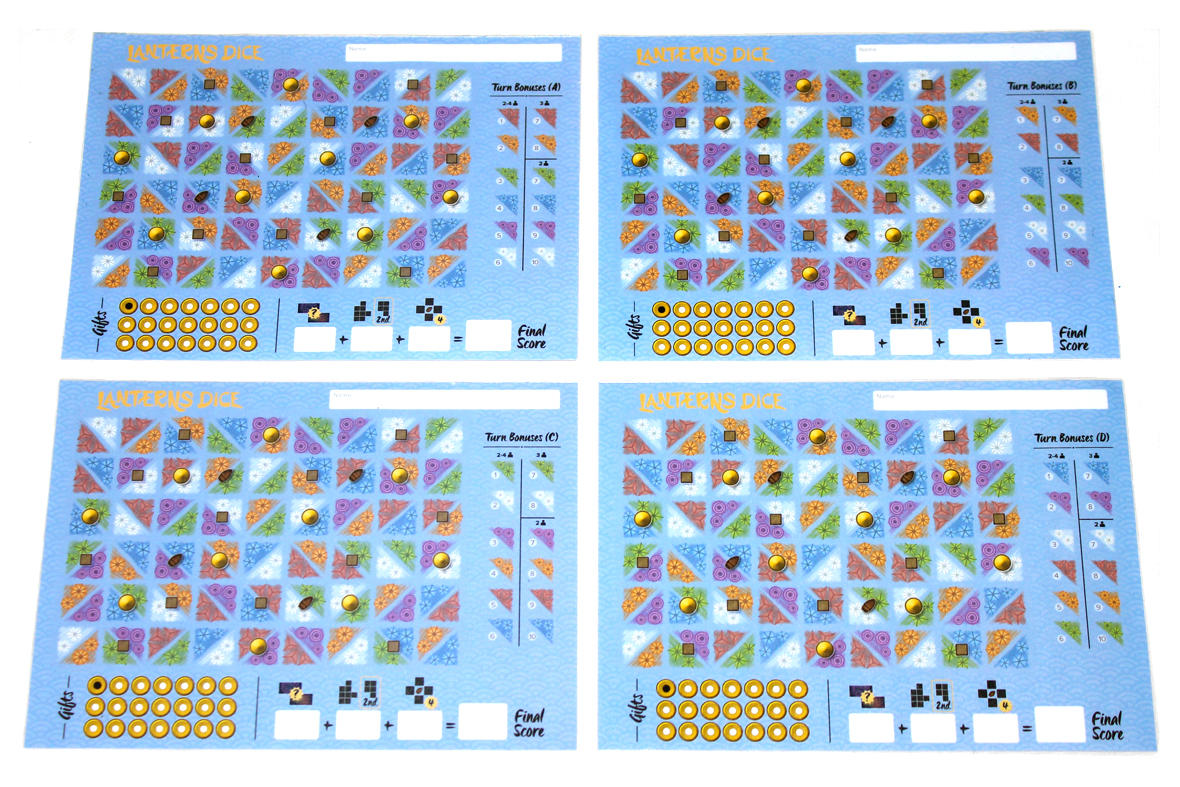 It doesn’t matter if they get A / B / C / D; they just can’t have the same one. The player counts determine how many turns there are; cross out the bonuses under the player counts that you’re not using.

Take the dice tray and the dice: 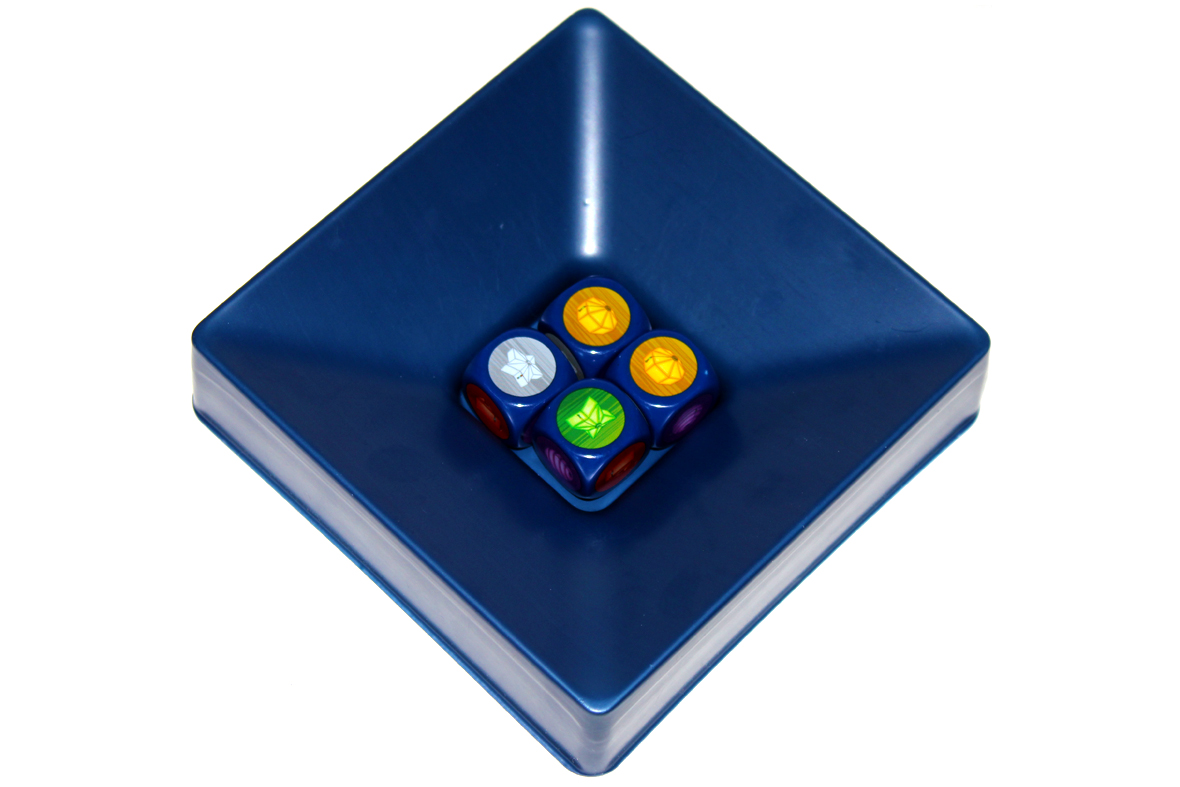 Give them to the first player (the player with the alphabetically earliest sheet). You’re ready to start! 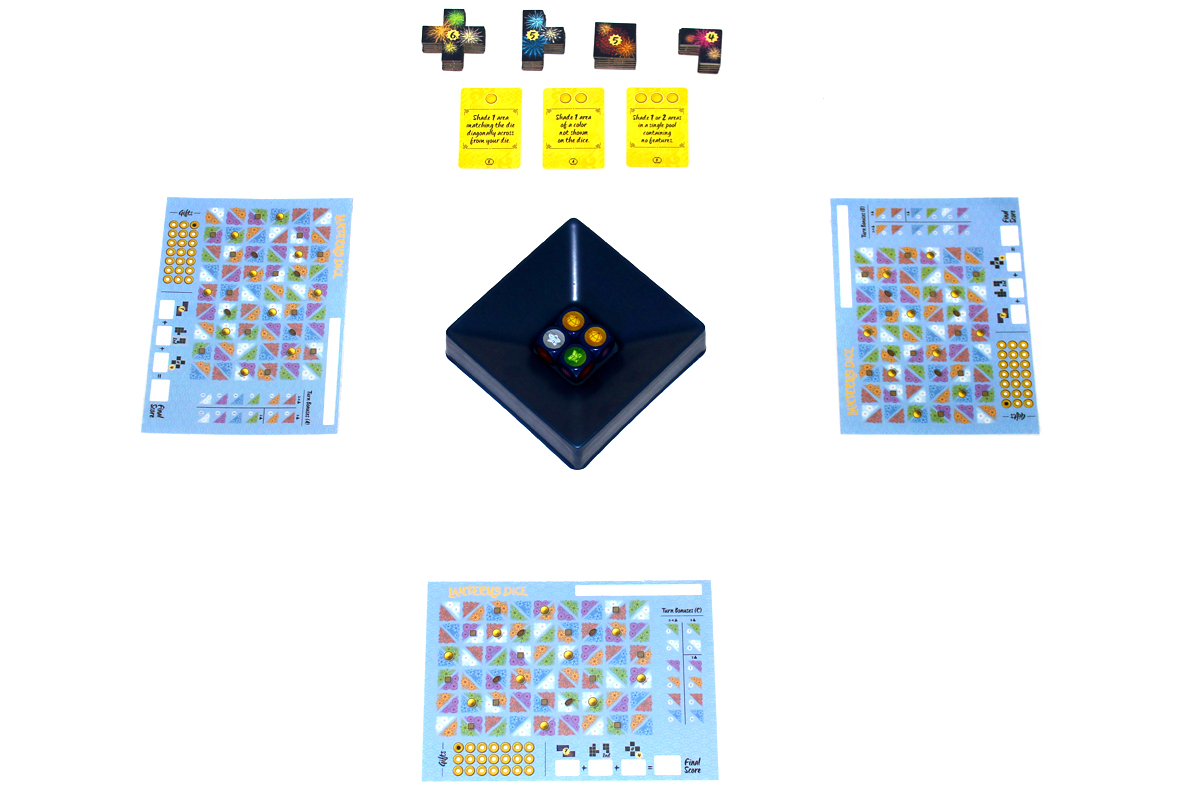 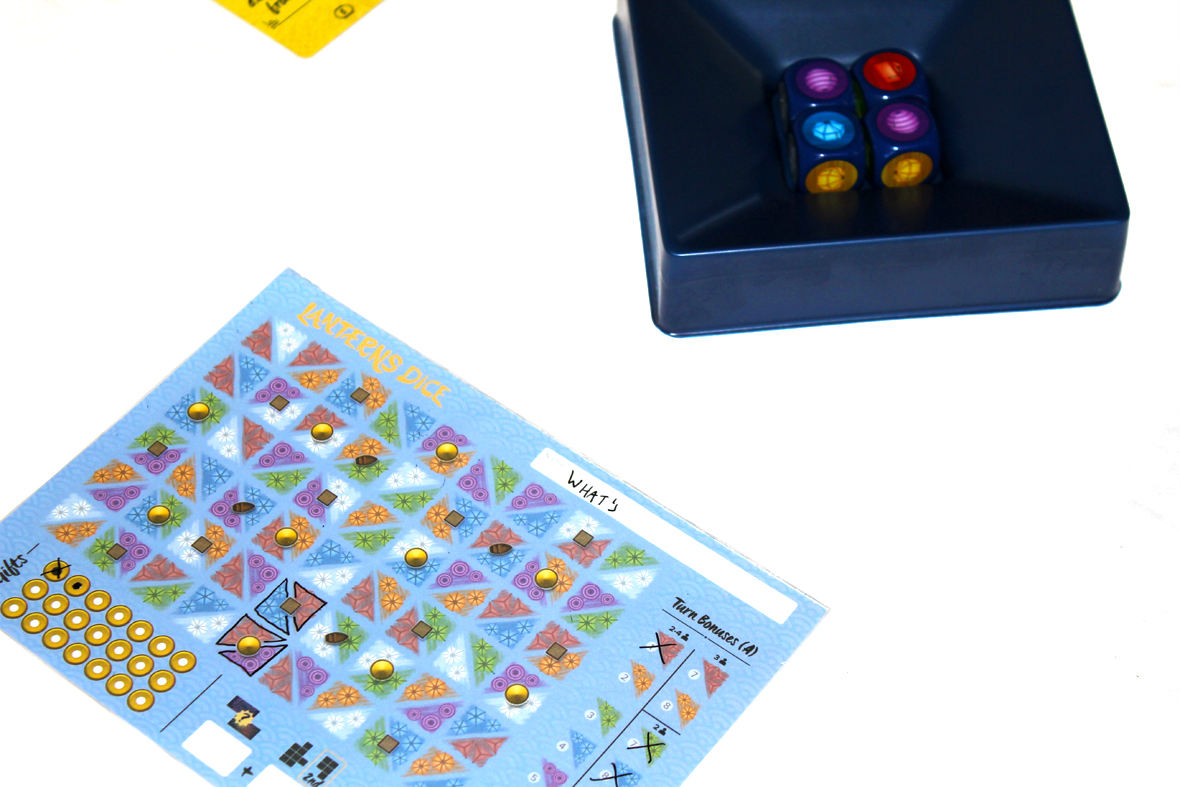 So, a game of Lanterns is played over a set number of rounds. Each round, each player gets a turn being the first player to roll the dice. Similar to Lanterns: The Harvest Festival (its original game), all players benefit when it’s your turn, so that’s nice; always something to do. Instead of placing tiles, however, you’ll be filling in spots on the lake. Do so to earn points, bonuses, and Fireworks Tiles. At the end of the game, the player with the most points wins! 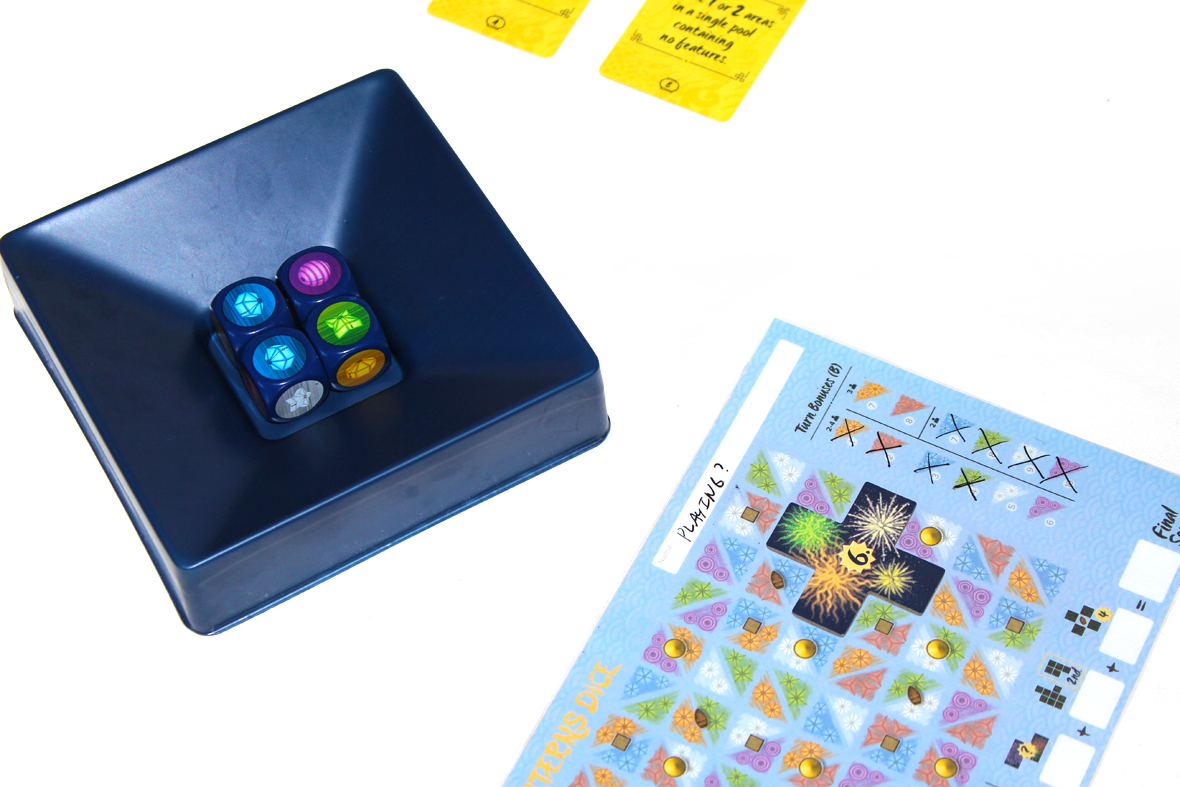 On your turn, roll the dice into the dice tray. Turn the tray so that every player has a die pointing towards them. If you don’t like the dice, you may spend one gift to reroll them (you may do this as many times as you have gifts to waste).

Now, every player shades one area on their scoresheet matching the die that faces them’s color. Certain areas are worth bonuses: 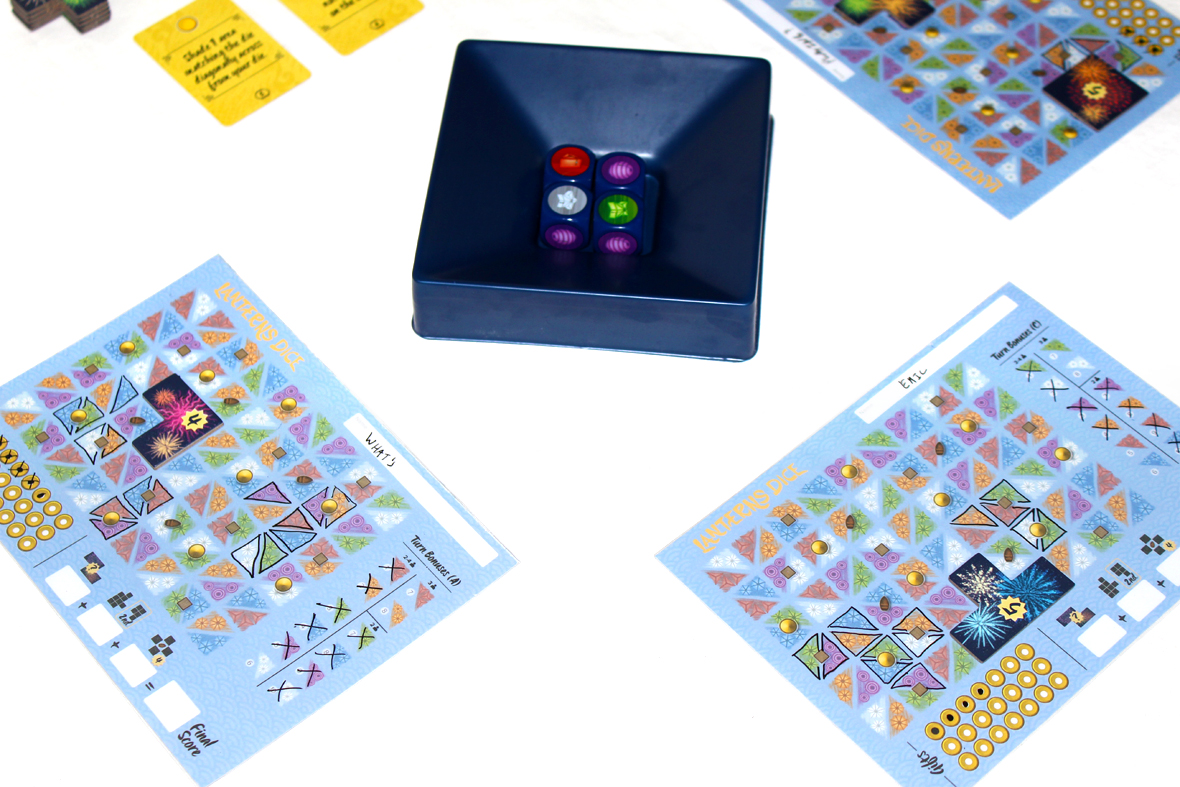 After this, the start player alone gets the bonus on their score sheet’s bonus area. Cross it out and shade one area matching that color. The same effects still occur as though you had shaded this area as part of the previous step.

All players may now spend gifts to perform one of the three face-up Emperor Actions. They usually let you shade additional spots on your board, but you must spend gifts to do them. You may only take one Emperor Action per turn, though. As with a Bonus Action, the effects of Pavilions and Platforms still apply if they’re shaded as the result of an Emperor Action. 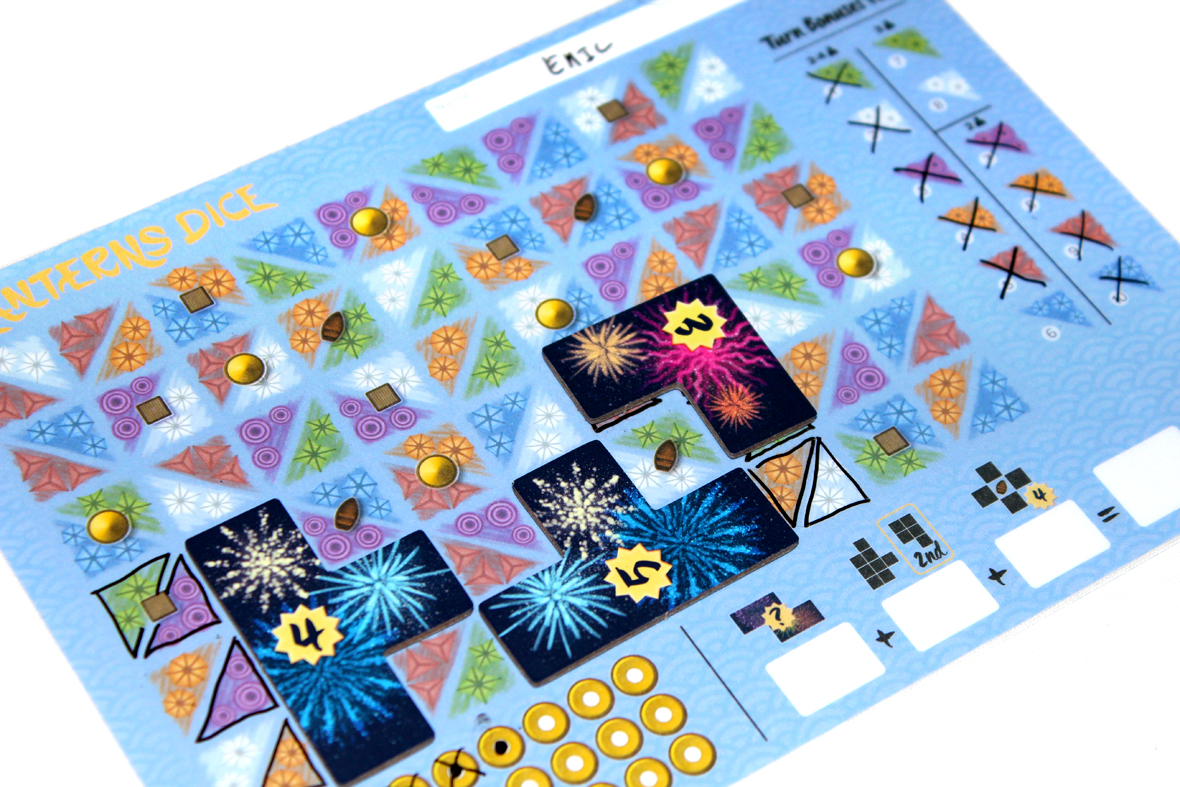 And back to the Start Player again, who may now launch a Fireworks Display, if they can. If you have a set of shaded pools that match the size and shape of one of the tiles, you may take the topmost available tile of that type and place it on your scoresheet, on top of the shaded pools. Note that you may only take this action if it’s currently your turn (as in, you rolled the dice this time).

Once you’ve done that, pass the dice to the player on your left. 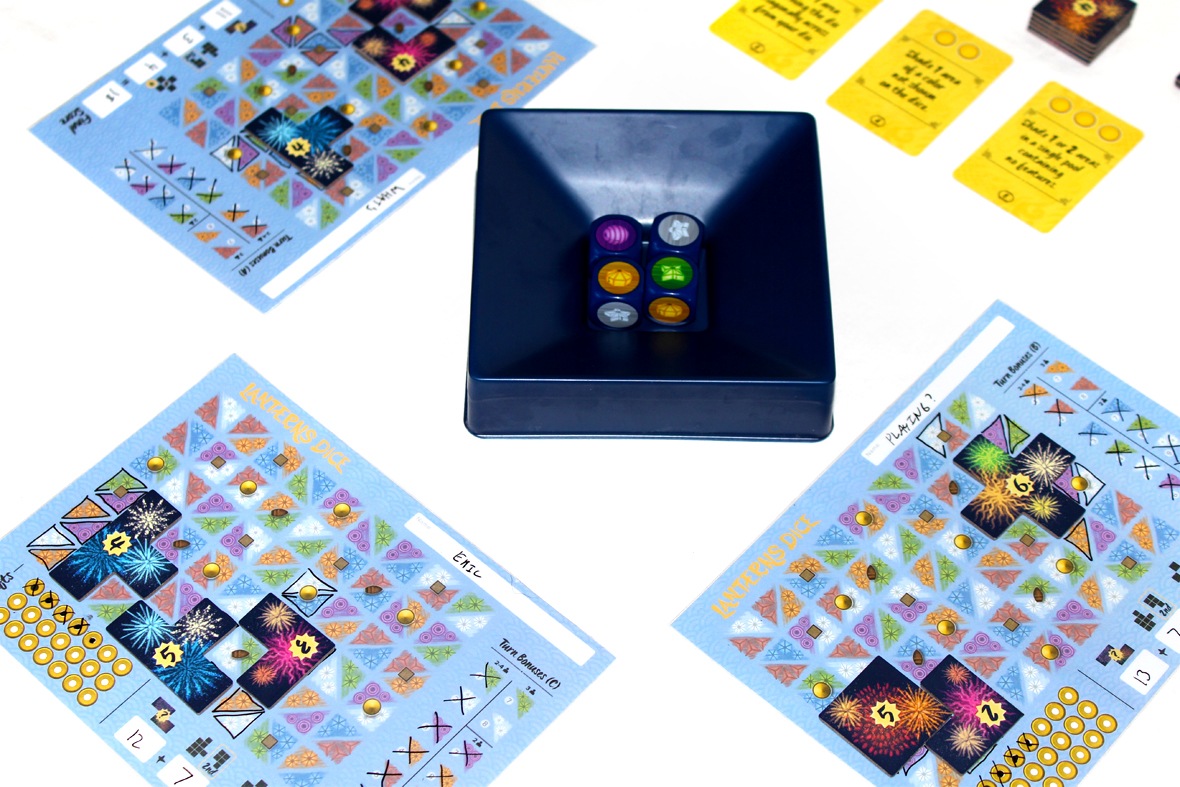 Once the last player has taken their final turn, the game ends. Each player may then, in turn order, launch one last Fireworks Display, if they can fit it on their board. Once you’ve done that, move on to scoring.

Total your score; the player with the most points wins!

Not a whole lot, though you’ll probably see players going through the Fireworks Tiles at a greater clip. You’ll get the same number (roughly) of tiles at every player count, but you won’t get as many predictable ones (since they’ll be coming from other players, rather than being generated by the game). That said, I still think that this game, like Lanterns, is most exciting at high player counts (more dynamic), so I tend to recommend it at 3 – 4 players. 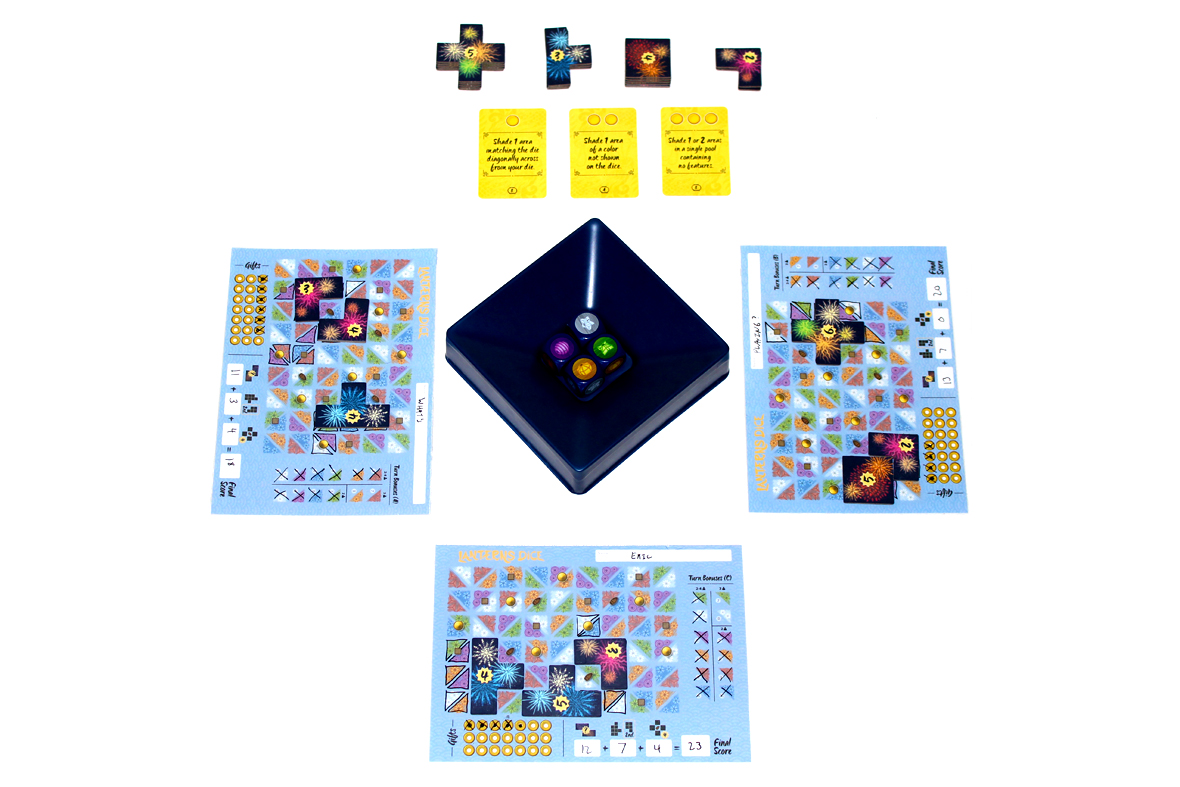 Overall, I enjoyed Lanterns Dice: Lights in the Sky! Like I said previously, I think it’s a surprisingly on-point adaptation of Lanterns: The Harvest Festival. That has pros and cons to it, of course; ironically, one thing I don’t like about it is that it feels so similar to Lanterns that I’m not sure I really need to own both of them. That’s kind of funny, in a way, but I think the positive way to interpret that is that they did a really good job capturing the important parts of The Harvest Festival and adapting them to this new format for Lights in the Sky, and I respect that. Personally, it makes me excited to see how they’re going to further develop this concept, and if it’s going to start diverging from The Harvest Festival any. If it does, that’s going to be really neat. Of the two recent roll and write games from Renegade, I think I have a slight preference for Hex Roller because it has a bit less overhead to getting started, but I’ve solidly enjoyed Lights in the Sky, as well. If you’re a big fan of Lanterns, you’re looking for a roll and write with great art, or you want a game with some dice drafting and interaction, Lanterns; Lights in the Sky might be a great fit for you!