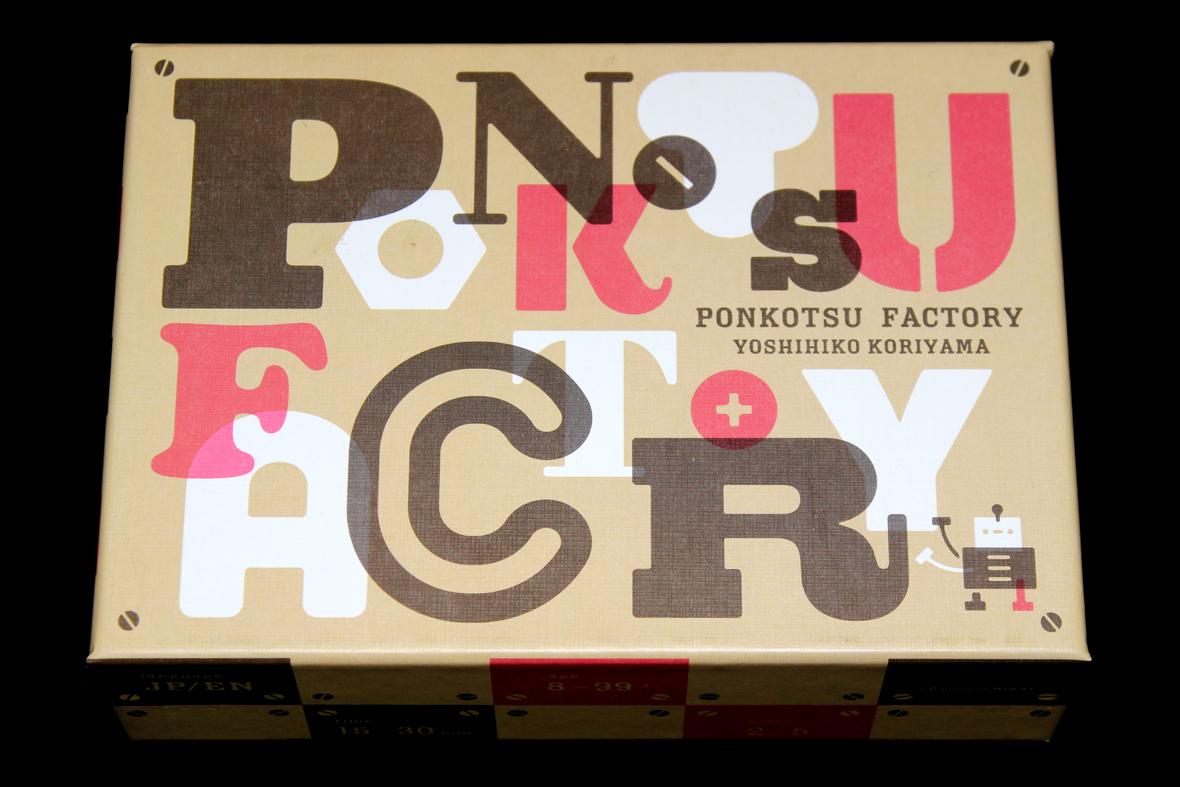 Full disclosure: A review copy of Ponkotsu Factory was provided by itten.

So, along with the doujin games, the games from Korea, Mandoo’s box of games, and a box from IDW, I also got a box of games to check out from itten! That’s all very exciting, but it is also a lot, which is why I’m writing this review at the very beginning of May and I have no idea when I’m going to publish it. It’s going to be an adventure! Either way, itten is making its US presence known at conventions this year, so I’d like to talk about their titles in case you see them there. Let’s start with Ponkotsu Factory, but I have much more to say in the future.

In Ponkotsu Factory, you play as robots, trying to reassemble the words you’ve been given. That’s the problem with letters, though; they don’t just only fit in one particular configuration. Keep trying, though, and maybe you’ll figure out just what you were originally given. Will you be able to finish your reassembly and match up? Or will you just end up scrambled?

Not much to do. Give every player a player screen:

And give them each a set of vowels in the matching color:

There are five gears; pull them out and set as many in the center as there are players. The game recommends leaving the larger gears in the box if you have fewer than five players, but we like big gears so we usually use those first:

Set aside the point tokens, as well: 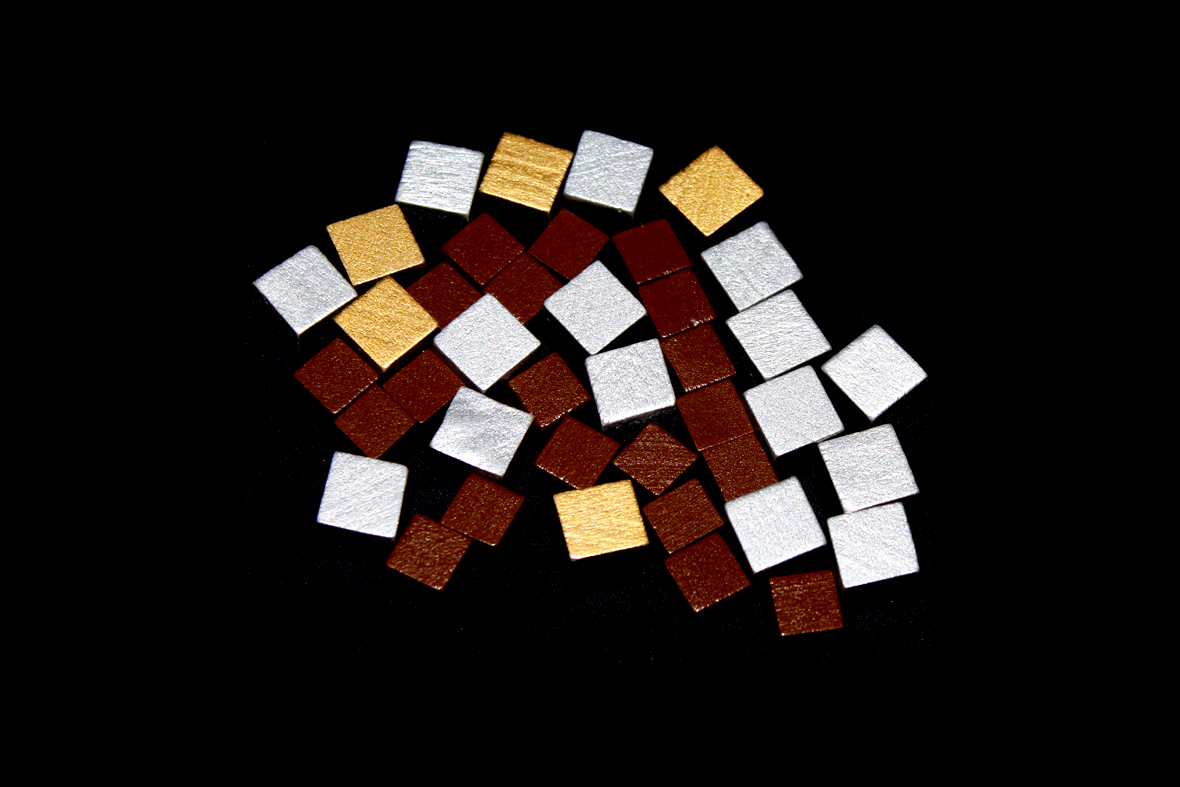 There’s also a sand timer, but I told y’all I wasn’t going to take pictures of that anymore.

Gameplay is surprisingly not too challenging. The game is played in two phases, essentially, where you try to confuse your opponents to score points. After four rounds, the player with the most points wins!

To begin a round, you take 15 letters and combine them with your vowels for 20 letters total. Use those letters to make 3 four-letter words, following these rules:

Once you’re done, write them down, so that you don’t cheat later. Put the vowels of yours you didn’t use aside, and return the other letters you didn’t use to the supply. Every player should shuffle up the 12 letters that comprise their three words, and then pass them to another player (this should be a different player every time, if you can do that). Once everyone has a set, count down from three and then start the second phase!

During the second phase, you’re going to rapidly try to assemble 3 four-letter words from the letters you were given. As soon as you’ve done so, take the largest remaining gear. If you are the first player to take a gear, flip the sand timer, as well. This gives the other players one minute to finish their words. Once everyone’s finished or time runs out, you’ll move on to scoring.

To score, you award points for quickness and correctness. For quickness, give points based on the size of the gear you got, starting at 5 for the first gear and 1 for the last gear. At lower player counts, you’ll start with smaller gears, so scale down appropriately (4 – 1 at 4 players, 2 / 1 at two players, etc.). Note that if time ran out and you didn’t assemble three words and take a gear, you get 0 points in this phase.

For correctness, go around the table and have each player read off the words that they wrote down. If they gave you their letters, you score 1 bonus point for every word of theirs that you created during your reassembly. You can still score these points even if you didn’t assemble three words. Also, if your opponent reads off a word that’s fake or misspelled, they must give you one of their points.

Give players their vowels back and go again! After four rounds, the player with the most points wins!

Not many, honestly. With more players, there’s more of an opportunity to distinguish yourself by being the fastest, but someone‘s still getting 4 points. Your goal basically becomes making sure it’s a different person every time so that you can start breaking away from the points pack. Beyond that, someone’s giving you somewhat random letters every round; it shouldn’t matter how many people there are. I was actually pleasantly surprised with this at two players; I thought I was not going to enjoy it, but I ended up liking it quite a bit! So, to that end, I have no strong feelings about player count for this one.

Overall, I really enjoy Ponktosu Factory! Naturally, it’s already got a lot going for it, because it combines two of my favorite game types: real-time games and word games, but I think it’s also got a cute theme, and I’m all about that. I could see a version of this maybe being a bit more mass-market successful if it were just bigger, across the board; larger tiles, larger screens, larger box, but I don’t think that’s generally itten’s style, and I can appreciate that. As it stands, it’s a compact, real-time, wordy party-esque game, and that suits me just fine. I do really appreciate that it works so well at two players, too; I can see myself playing this against one of my coworkers a lot in the future. It’s a great length for a lunch game. Anyways, if you’re a fan of offbeat little word games, real-time games, or you’re looking for a new way to burn a small part of your brain out with anagrams, I’d definitely recommend trying out Ponkotsu Factory! I think it’s a bunch of fun.