Full disclosure: A review copy of Zenteeko was provided by, uh, Zenteeko.

Another week, another game. This is one of the rare ones that I haven’t scheduled yet so, I’m kind of excited to see where it ends up in the publishing order.

Zenteeko hearkens back to a bygone day of abstracts in the vein of checkers, Reversi, and a game called Windmill, apparently, is what I’ve been told. Unlike those other games, though, it does come in a roll-up tube, so that’s exciting. Put your pieces down and try to line them up before your opponent can do the same. Who will end up making that final connection?

No setup. Just unroll the board:

Set out the pieces: 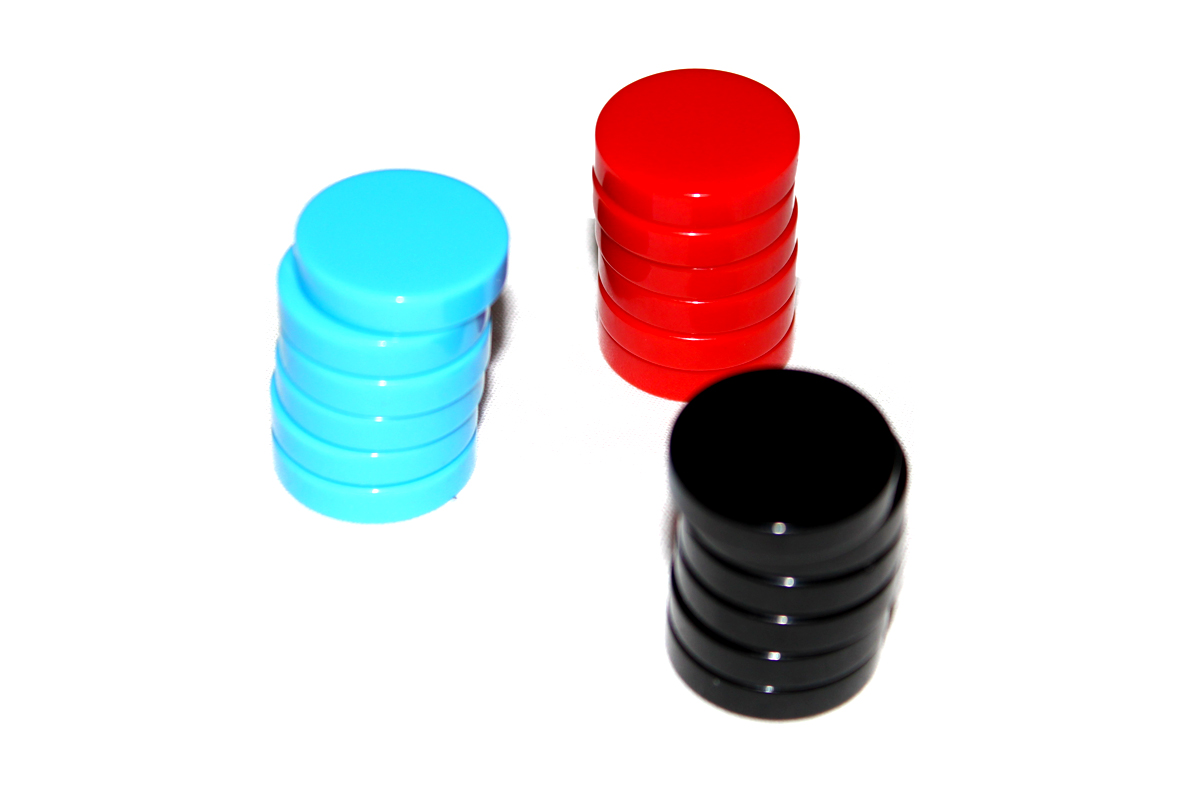 Bless them, they included extras. Give each player 4 in the color of their choice, and you’re ready to begin! 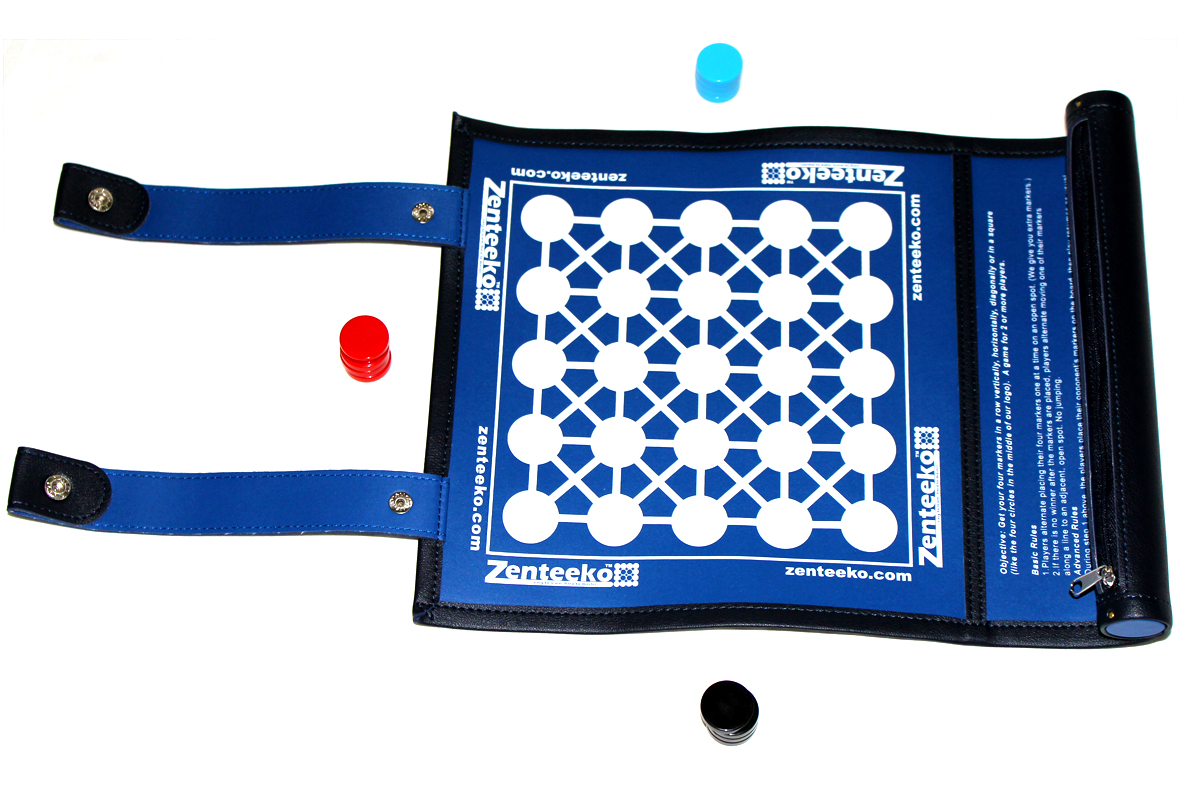 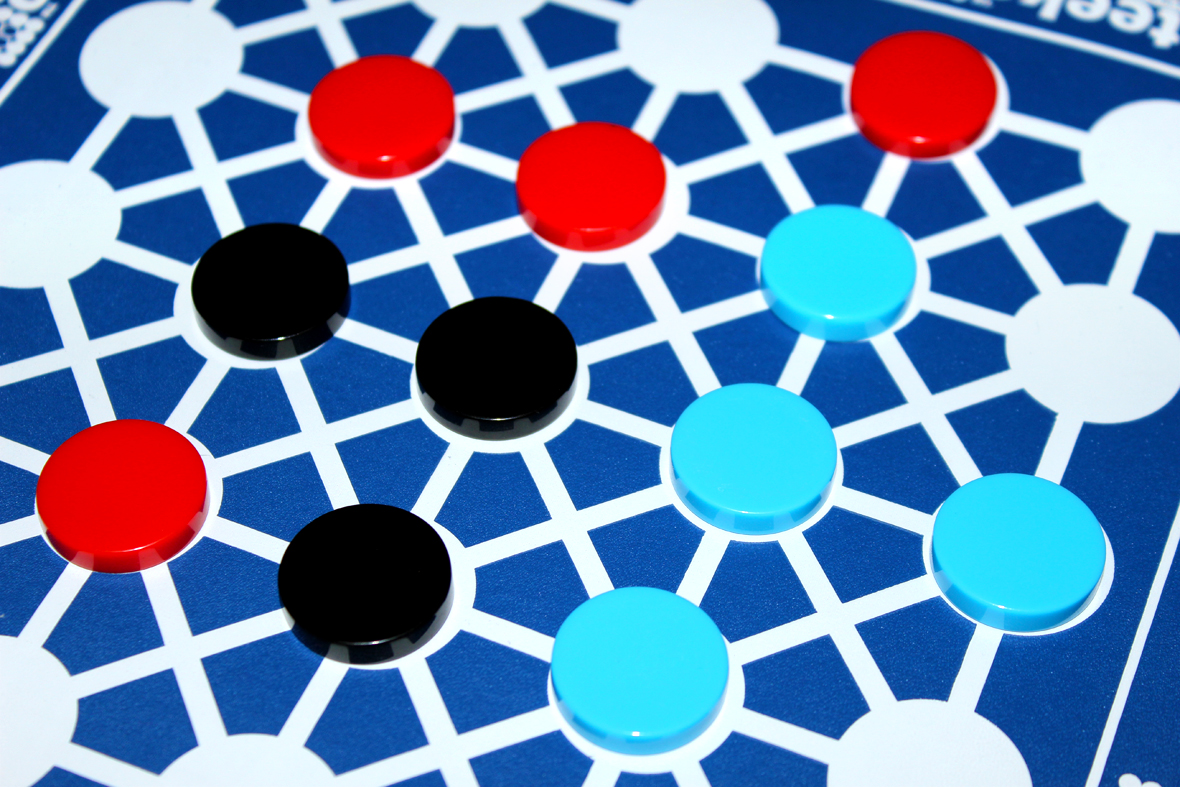 Pretty straightforward concept, honestly. To begin the game, players may place their pieces, in turn order, anywhere on the board. Once you’ve gotten your pieces onto the board, the game begins. Your goal is to get your four pieces in some configuration:

If you can do that at any point (even during setup!) you win immediately. Same goes for your opponent(s). 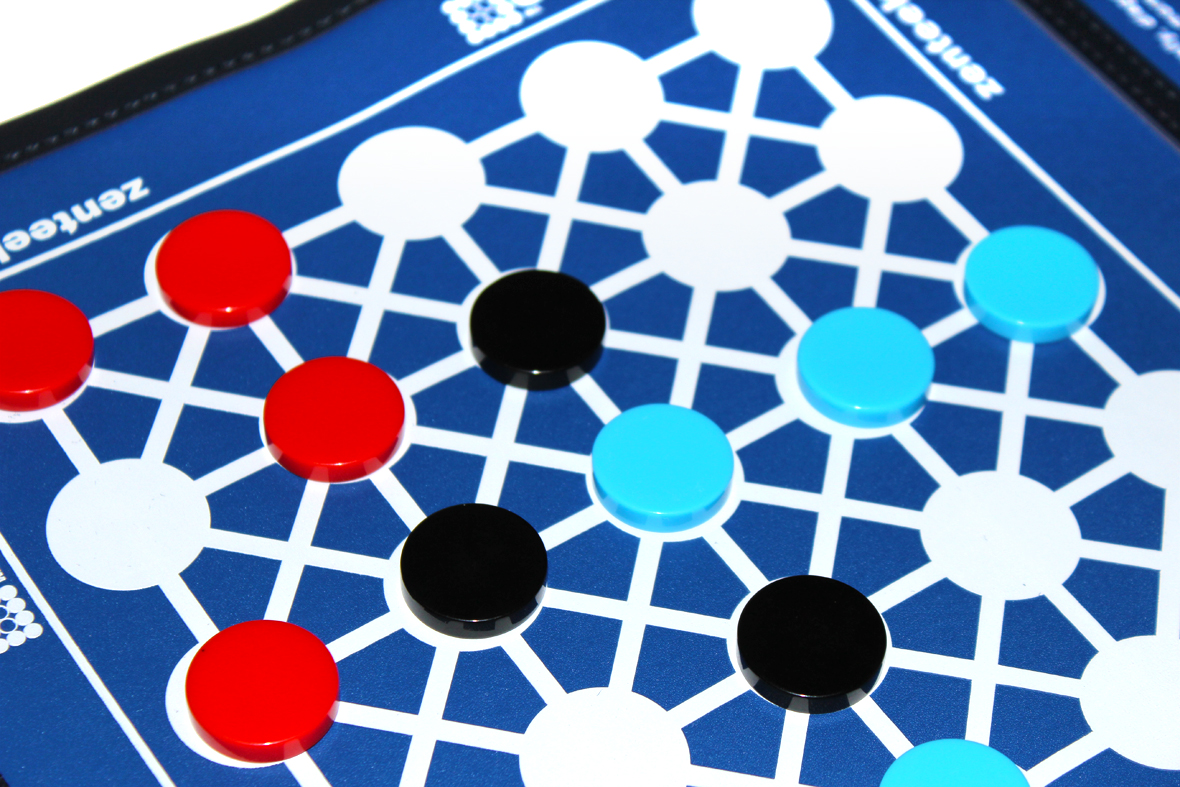 Once all your pieces are placed, you may move any of your pieces to an adjacent (empty) space via one of the lines emanating from the space you’re currently on. Take turns until one player wins! 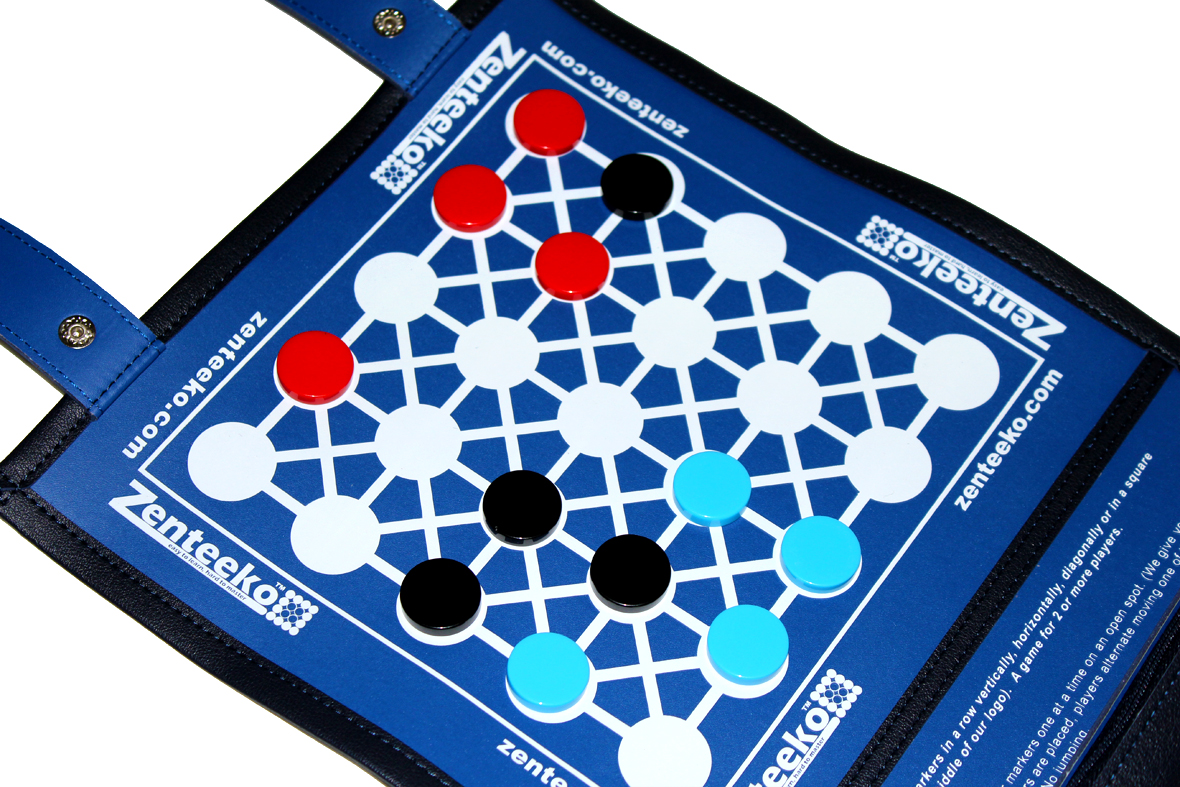 For the advanced mode, the only thing that changes are the first four turns. Instead of playing your own pieces, play your opponent’s pieces to the board in turn order. I usually just pass my stack to the left. Once that’s happened, you resume playing as normal.

There’s not much of one, honestly, other than the board is a bit tighter and you have to deal with more player pieces around. One nice thing is that you can force players to block each other since there’s an extra player around, but that may backfire on you if your opponent decides not to block the other opponent or misses that they’ll win if they’re not blocked. Or, naturally, if they decide to make you do the work of blocking, that’s not fun either. Personally, my impression of the game is that it’s a two-player game through and through with a bonus three-player variant, kind of like Santorini, but with the same inherited flaw; at three, the board is more crowded (and more interesting), but some inadvertent kingmaking can happen, which is never particularly fun to see. It’s really your call if that’s something that bothers you, but generally I’ll probably stick with this at two players unless I need something quick for three. 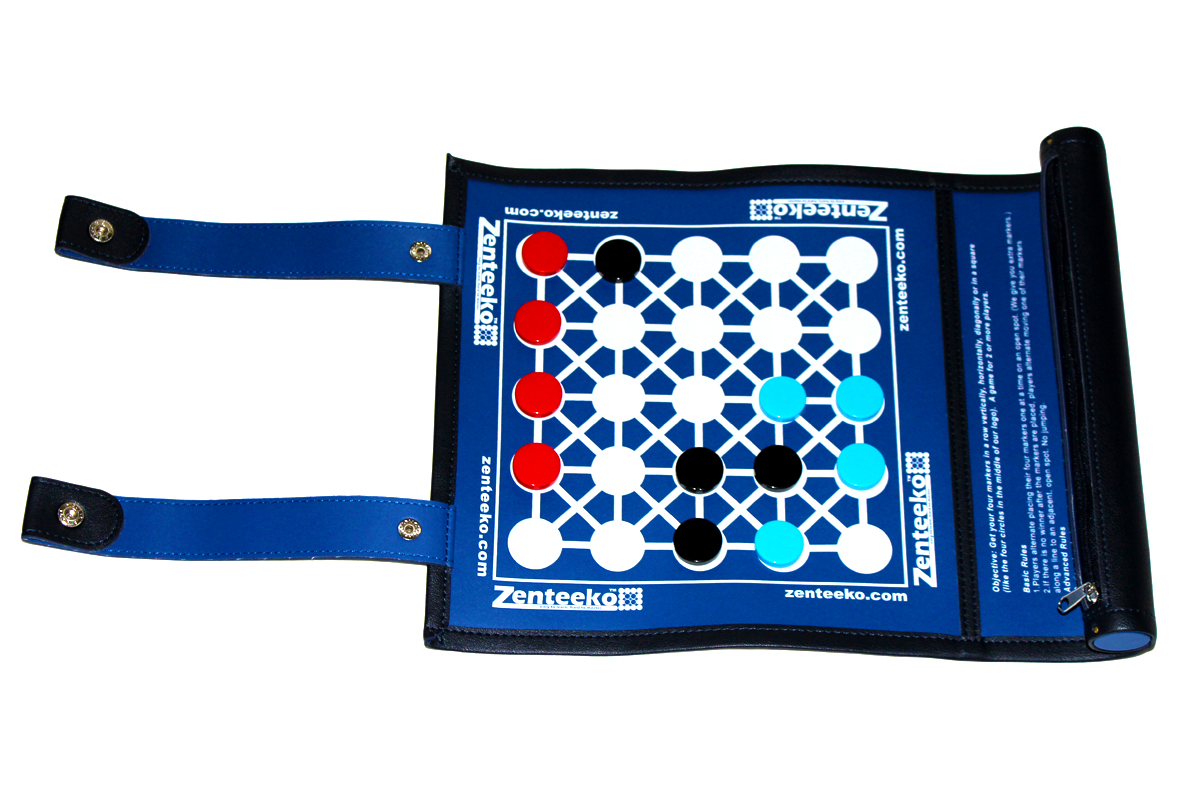 Overall, Zenteeko is a cute little quick game! At two, it’s very easy to play a game in 2 – 3 minutes, if you’re anything like me and you consistently clown yourself into a loss. At three, you’re likely to see a thinkier game as players need to figure out how to block another person without ceding enough territory that they lose the game. It’s a delicate balance, but isn’t annoying like many three player games are where once the balance shifts at all, the game is lost. I think you can recover ground (unless you lose, as you might guess) in subsequent turns, and I appreciate and respect that in the game. Plus, it’s very portable, comes with its own storage, and is reminiscent of the classic games of old, which I definitely appreciate. I think the best audience for this game is going to be those sorts of folks; it’s a great size for a school’s game cafe or a lobby or some place where space is coming at a premium, for sure, and the game’s simple enough that you could see it pretty easily being played by curious players without much trouble. If that sounds like the kind of thing you’re looking for, then I’d recommend checking out Zenteeko! I’ve found it to be pretty fun.