Full disclosure: A preview copy of Animalchemists was provided by CardLords. Some art, gameplay, or other aspects of the game may change between this preview and the fulfillment of the Kickstarter, should it fund, as this is a preview of a currently unreleased game.

So soon after Gen Con, I know, but there are Kickstarters to launch. Two, this week, which is kind of interesting; I’m surprised they’re launching so close to Gen Con, personally; I feel like I’d almost wait until September to launch something. But also I know literally nothing about Kickstarter marketing, so I’m just kind of rambling to fill space. None of that has anything to do with Animalchemists, so let’s try to stay on task and dig into that.

In Animalchemists, you are, well … those. Masters of your craft, you seek to gather ingredients, brew potions, and combine them to perform fantastic spells and cement your place as the greatest of all. Naturally, your opponents want to do the same, so be careful; as you’d imagine, the potion labeled “Poison” isn’t exactly safe. Will you be able to create your perfect concoction? Or will it all end up blowing up in your (being honest, cute, since, animals) face?

Not much to do here. Give everyone a Character or let them choose one:

Shuffle the Ingredients and make a row of five:

Set out the stacks of Potions in a row below the Ingredients:

Shuffle the Spells, but place the Time Stop spell on the bottom of the deck. Then, reveal five, forming another row below the Potions:

Once you’ve done that, you’re basically done! Look at the bottom card of the Ingredient deck; the player whose Character card favors that resource goes first.

The core game is pretty similar to games we’ve covered in the past like Splendor or Triumphus, which is that kinda-cyclical market game. Your goal is to craft and cast valuable spells while preventing your opponents from doing the same in order to prove your worth as a powerful wizard. You also want to do that in the game. Unlike many games, this game does end immediately when Time Stop is crafted, and the player with the most points wins!

On your turn, you may do one of the following actions:

Brewing Potions is much simpler than some other games makes it look; discard the two required ingredients and take the potion from the stack. Potions are single-use and finite, so if you run out of potions in a stack nobody else can get potions of that type. Unused potions are also worth points at the end of the game, though.

You may also do a bonus action on your turn, Cast a Spell, as many times as you’d like. Your Character’s ability counts as a spell, for gameplay purposes, so you may use that exactly once, as well. When you cast a spell, flip it over and resolve its effect. Its point value doesn’t change; it just can only be used once.

The game ends immediately after a player prepares the Time Stop spell. No other effects, the game’s just over. Calculate your score: 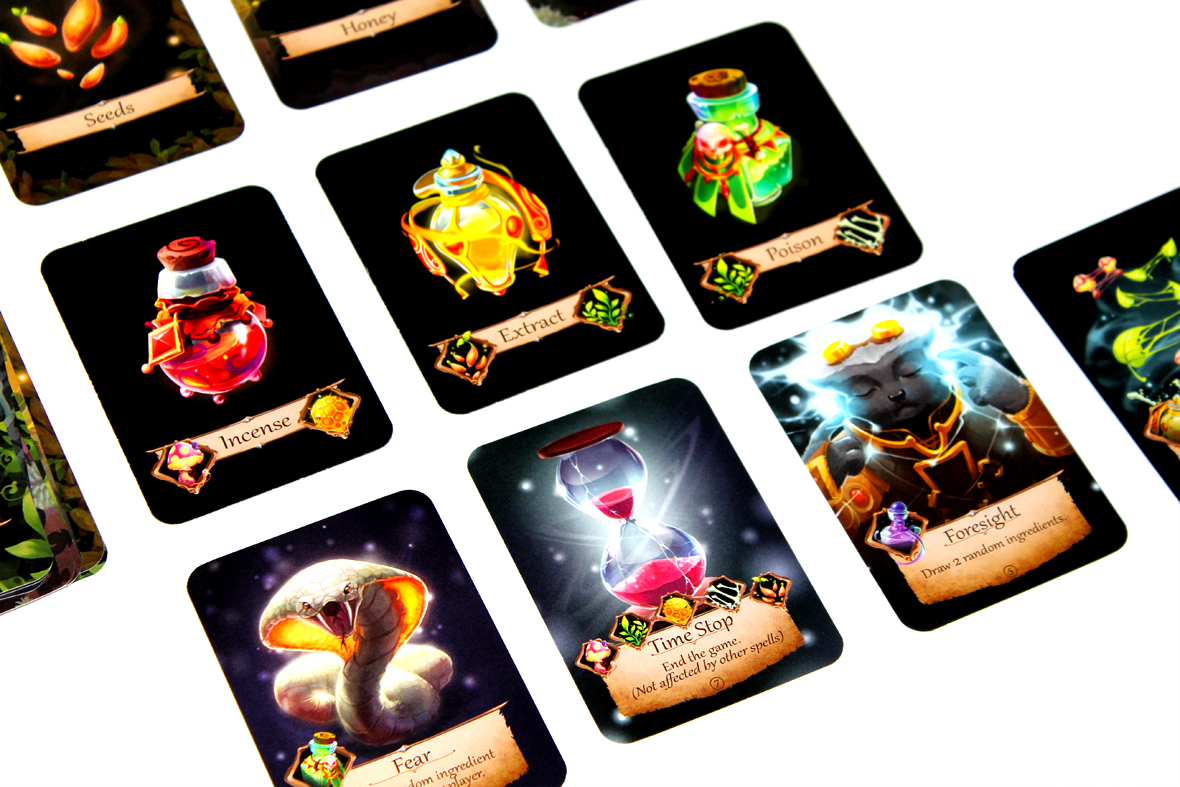 Not really anything particularly measurable, in my opinion. The thing you’ll most likely notice is that Spells and Potions tend to go faster since there are more players grabbing them. That’s generally bad for Potions (might burn through the whole supply) but good for Spells (gives you more opportunities to gain higher-value spells). Personally, I haven’t found the game to have much of a catch-up mechanic, so I have a slight preference for it at two players since it’s a bit harder to spread points around as aggressively. It’s a very minor preference, though. 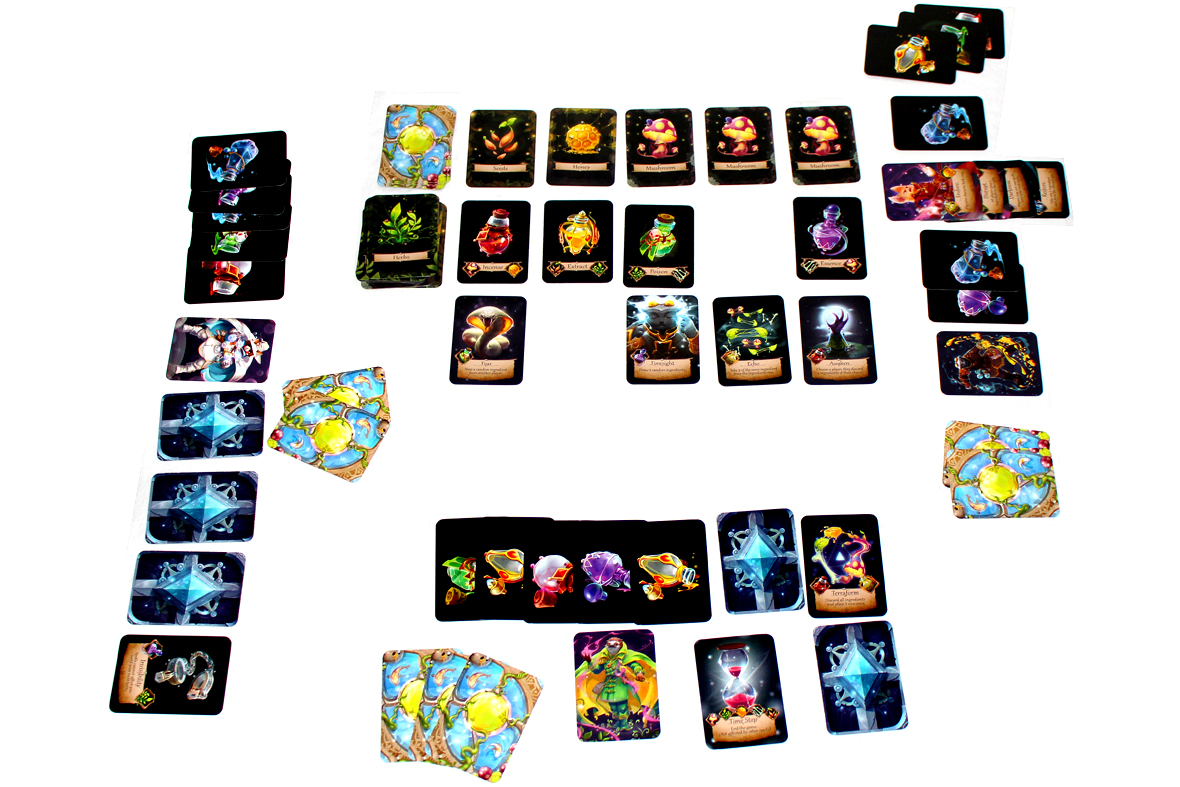 Overall, I think Animalchemists is fun! There are a few things that give me pause, sure, but I think it’s just a bit simpler of a game than what I’m looking for, right now. There’s nothing particularly wrong with that, but I think for my personal taste it seems to be caught between a light game and a filler game without a real desire to commit to either. This means you’re getting some filler game elements, like portability, quick gameplay, and low complexity, but you’re also getting a game that lasts a bit longer than you’d expect from its weight and cognitive overhead. There are some people who will like that, and that’s totally fine; I think that the art will also help smooth that over a bit, because it’s an absolutely beautiful game. Just, for me, I’d like it to either run faster or have a bit more engine-building or something going on to keep me engaged for longer. It might be that the potions cause the game to run a bit longer, and that’s about where it starts to slow down, for me? Unclear. I made a similar comparison to Triumphus, which has a two-stage market rather than a three-stage market. Its cycle is simpler, but it also moves a bit faster as a result. I didn’t care much for it either, but I think a simpler cycle may help Animalchemists target that filler-level game, if that’s what they’re going for. If not, some extra variability, maybe by way of events or challenges or non-single-use player powers might be things to help bolster the gameplay up to a light strategy level. I’d just like to see it commit one way or another. That said, I have enjoyed playing it, so if you’re looking for a quick game with fantastic art and magical animals, Animalchemists might be up your alley, too!