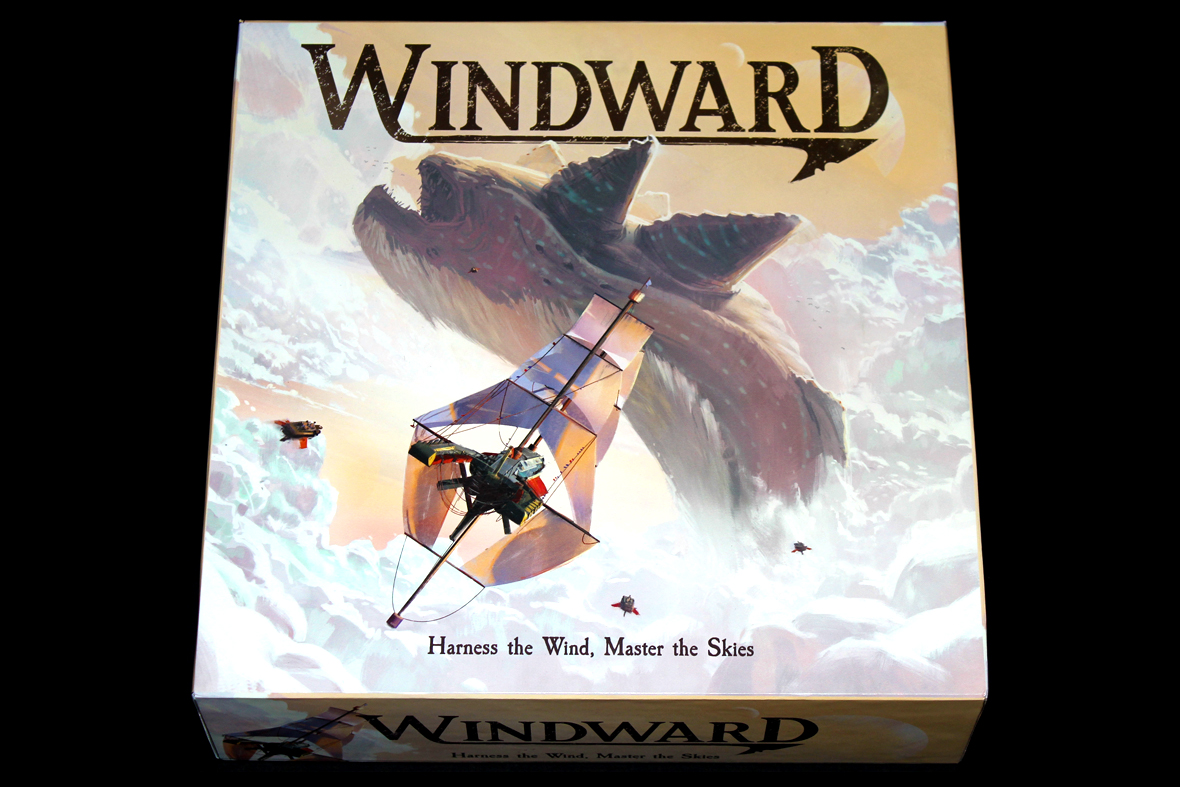 Full disclosure: A preview copy of Windward was provided by El Dorado Games. Some art, gameplay, or other aspects of the game may change between this preview and the fulfillment of the Kickstarter, should it fund, as this is a preview of a currently unreleased game. Also, while I don’t charge for Kickstarter previews, the publisher was charged a rush fee due to the tight timeline they needed the review completed in.

This is roughly what me slowing down on Kickstarters looks like. I think I have a two-week break from Kickstarters in September. Maybe. Anyways, our next game up is Windward, from El Dorado Games. They published The Legend of El Dorado a while back (not to be confused with The Quest for El Dorado, one of my favorite racing deckbuilders). With a penchant for art, interesting minis, and familiarish themes, I was intrigued, so, figured I’d check it out.

In Windward, you are a ship captain on the planet Celus. It’s a gaseous planet, so, no ground, but what you lack in ground you make up for in pretty much endless open sky. There’s just the Crester problem. Gray Cresters? No problem whatsoever. They’re beautiful, peaceful creatures that you kill in droves for fuel and teeth and you’ve mostly closed off your feelings on that particular subject, which is a thing you’re totally capable of doing. Red Cresters, though; they’re mean. I mean, wonder why, given how many Gray Cresters you’ve killed. But who can say? You mean to strike a name for yourself on this world, and you’re going to do that by getting a ship, getting a crew, and doing some Space Whaling. Will you be able to become the most notorious sky ship captain Celus has ever seen?

Setup is interesting, albeit a bit convoluted. Assemble the world by shuffling the six Territory Boards: 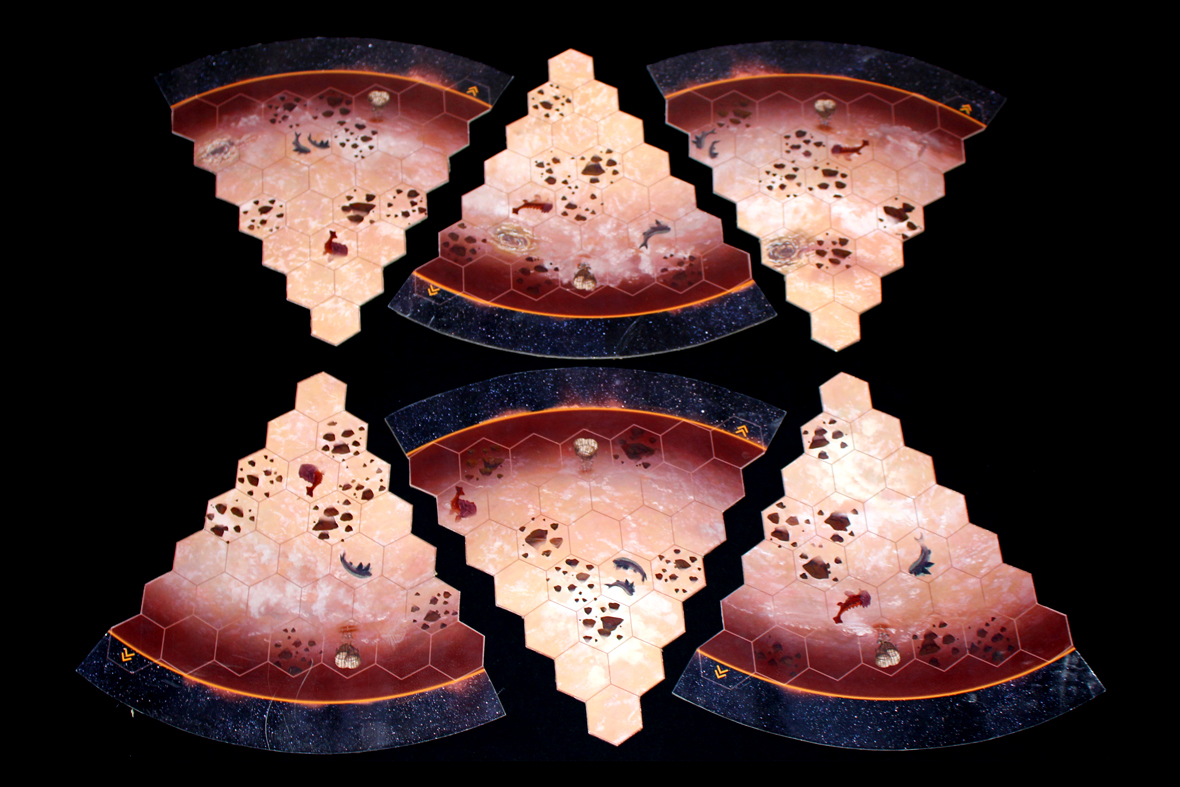 Place the Trading Post in the middle, floating high above the ground: 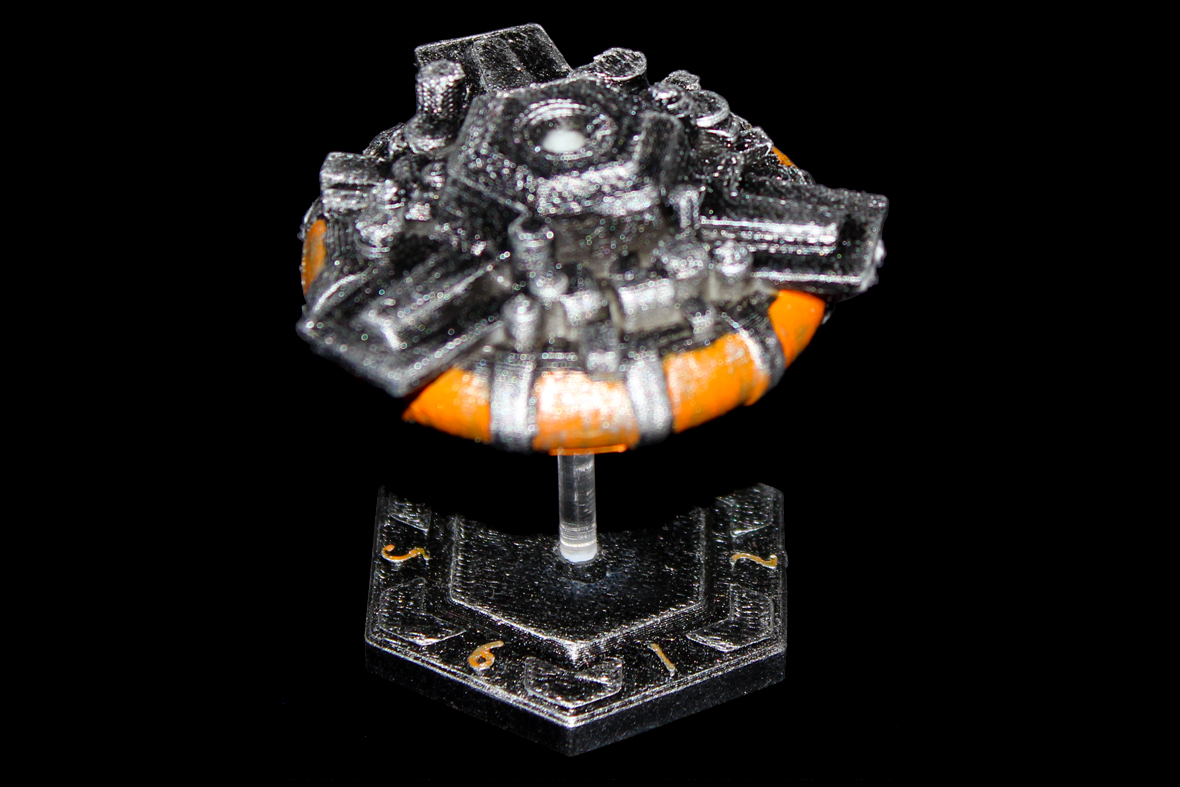 Put two of the Gas Tokens on every Gas Pocket space: 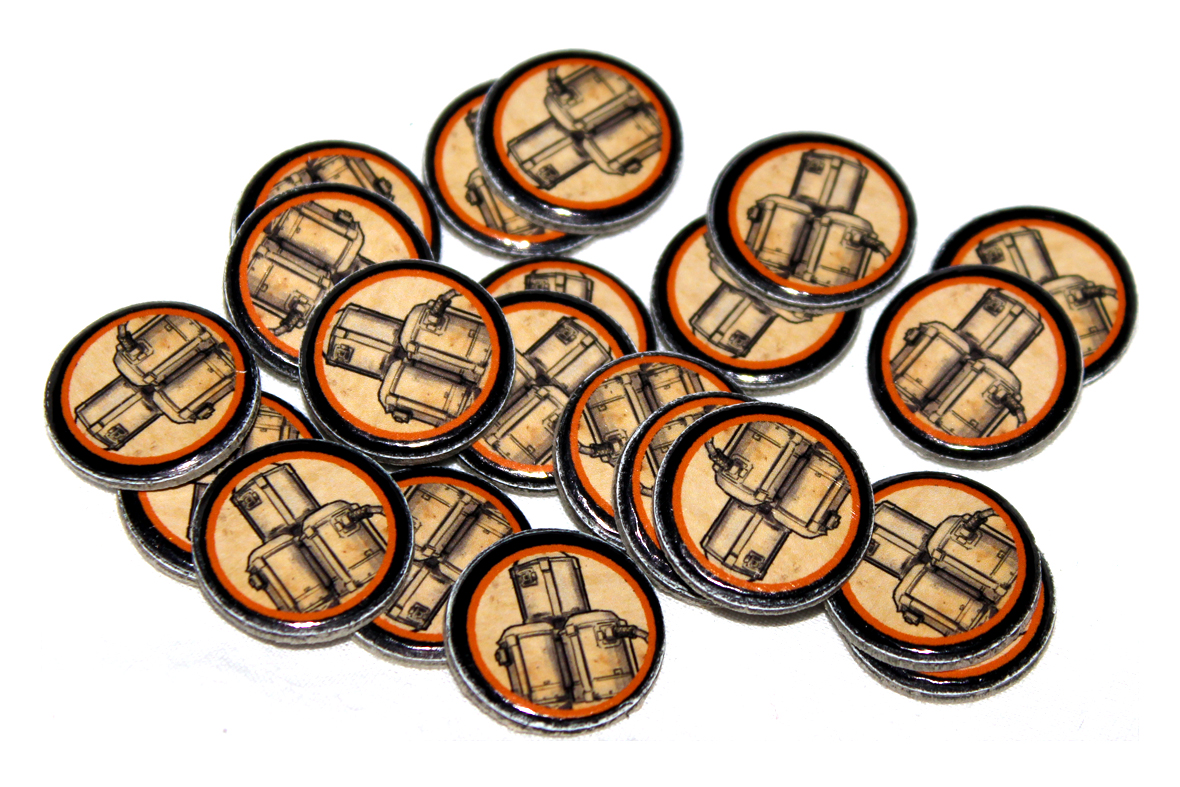 Set the other tokens (+2, Cannon) aside for now:

Give each player a ship board, ships, boats, and mates:

The mates are just … meeples in every player color. BGG gets mad enough at me for photographing generic items. Place a color token on the Morale 1 (you start a 1 Crew Morale). Your ship starts at Port, so place it on the Port space on your board. Now, choose a player to go first, and they roll the D6: 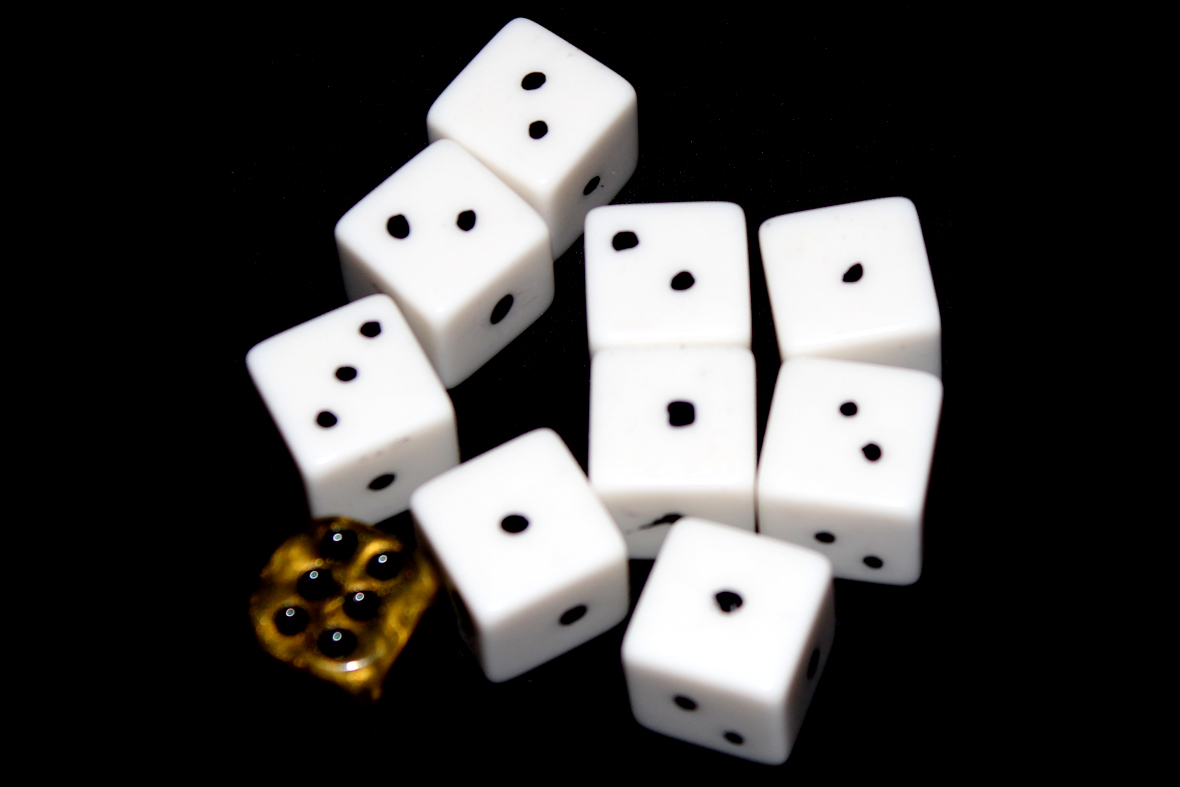 50% sure they’ll be less hand-drawn in the final version.

The other dice, you can set aside. Put the wind indicator flag into the trading post and turn it such that the wind is blowing towards the Territory indicated by the number on the D6. Now, shuffle the Supply Cards: 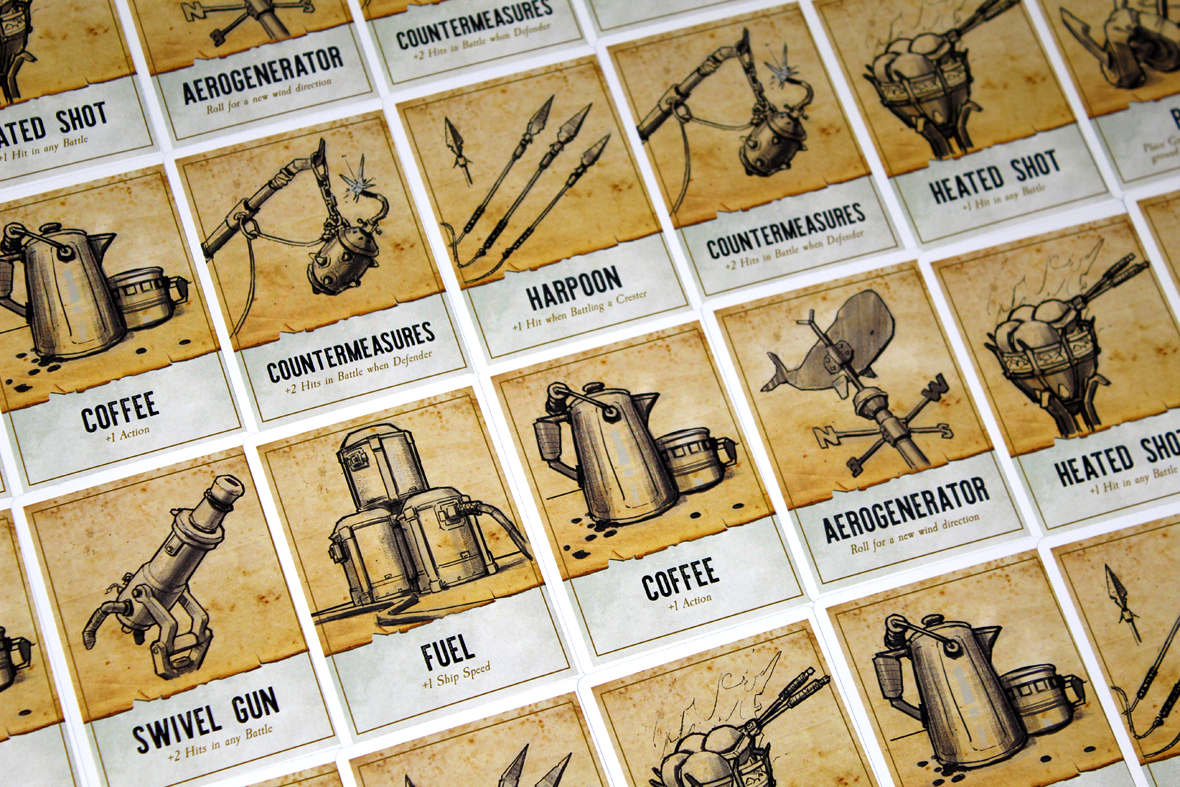 Deal each player one more than the previous player:

Split the remaining cards into three equal piles and place them face-up on the Port Board: 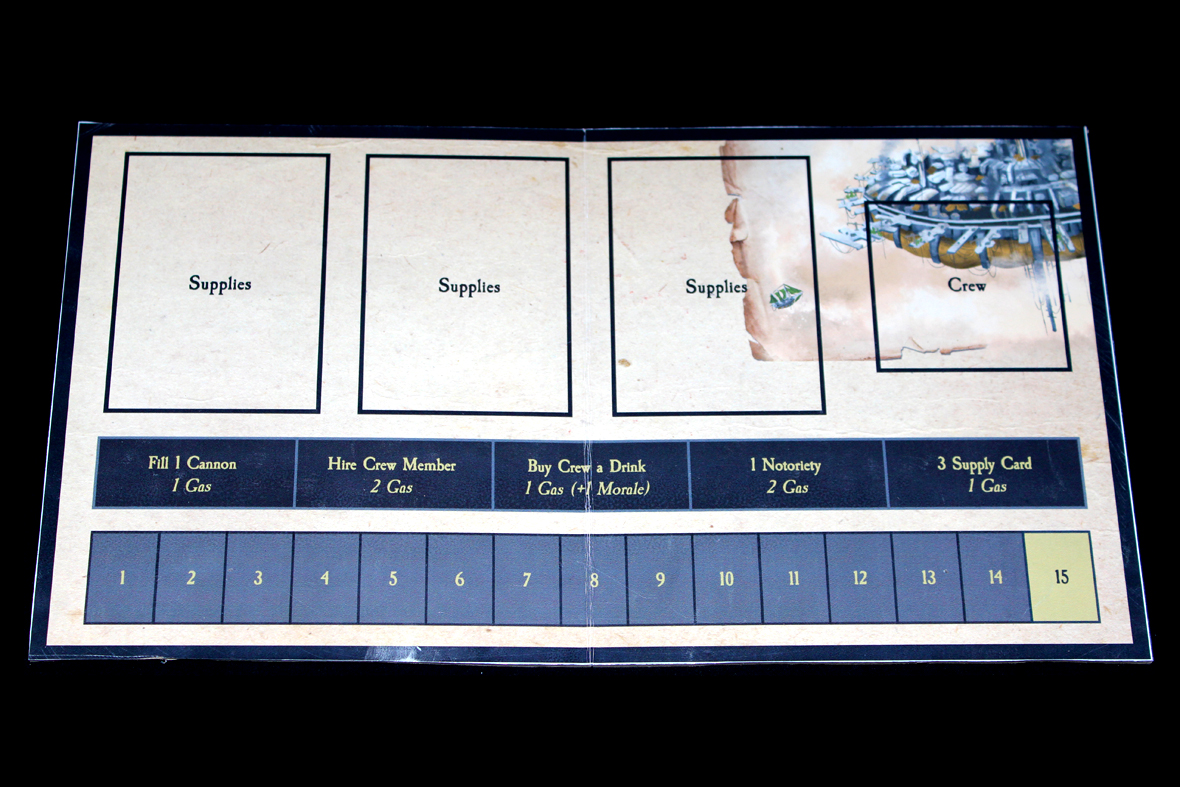 Now, roll the D6 again and place a Gray Crester on one of the Feeding Grounds spaces: 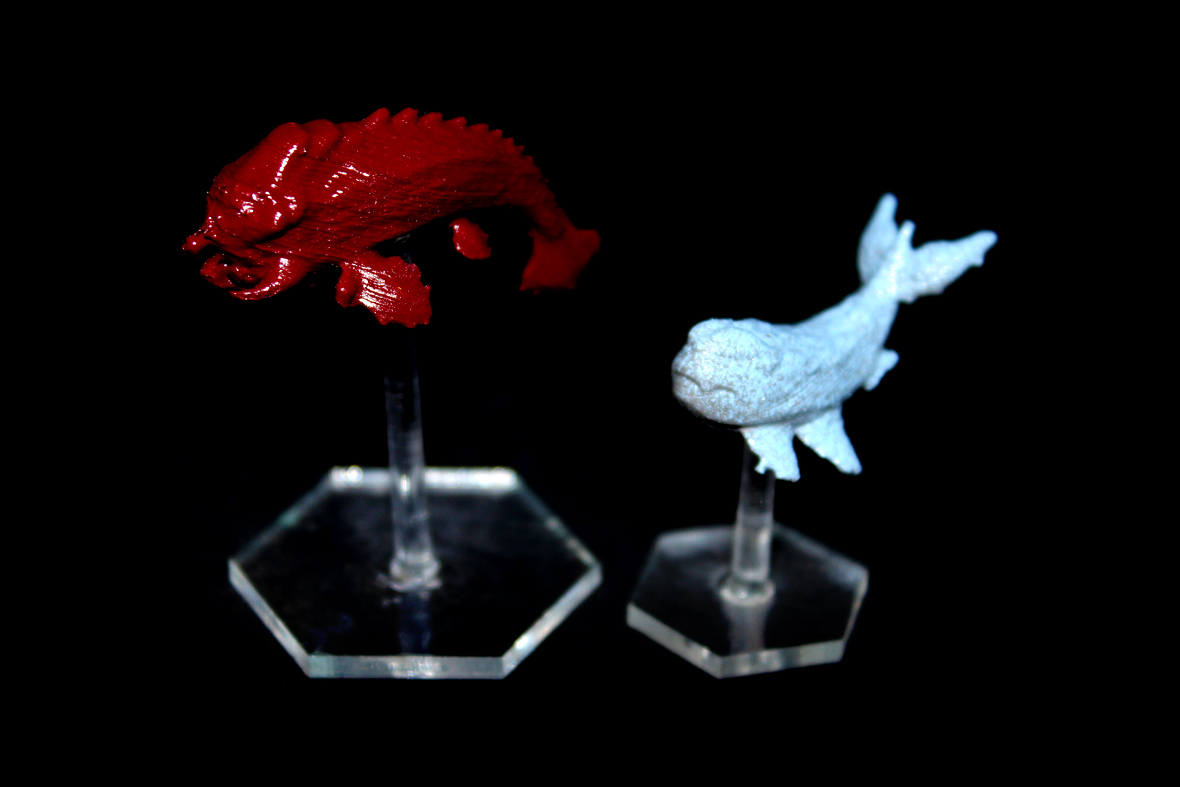 Do this until there’s 1 fewer Gray Crester than the number of players. Every Red Crester space gets a Red Crester, though. Place the teeth nearby, too: 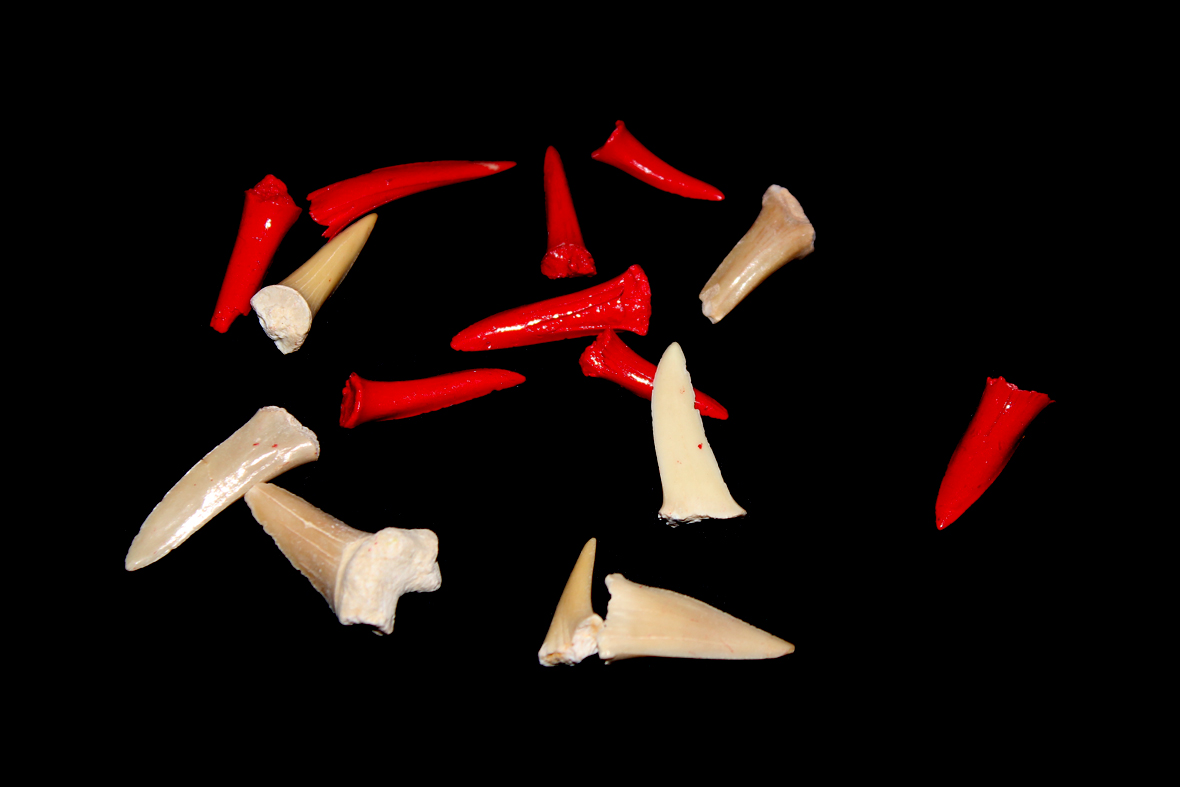 If you’re playing with Achievements, place two, face-up, so all players can see: 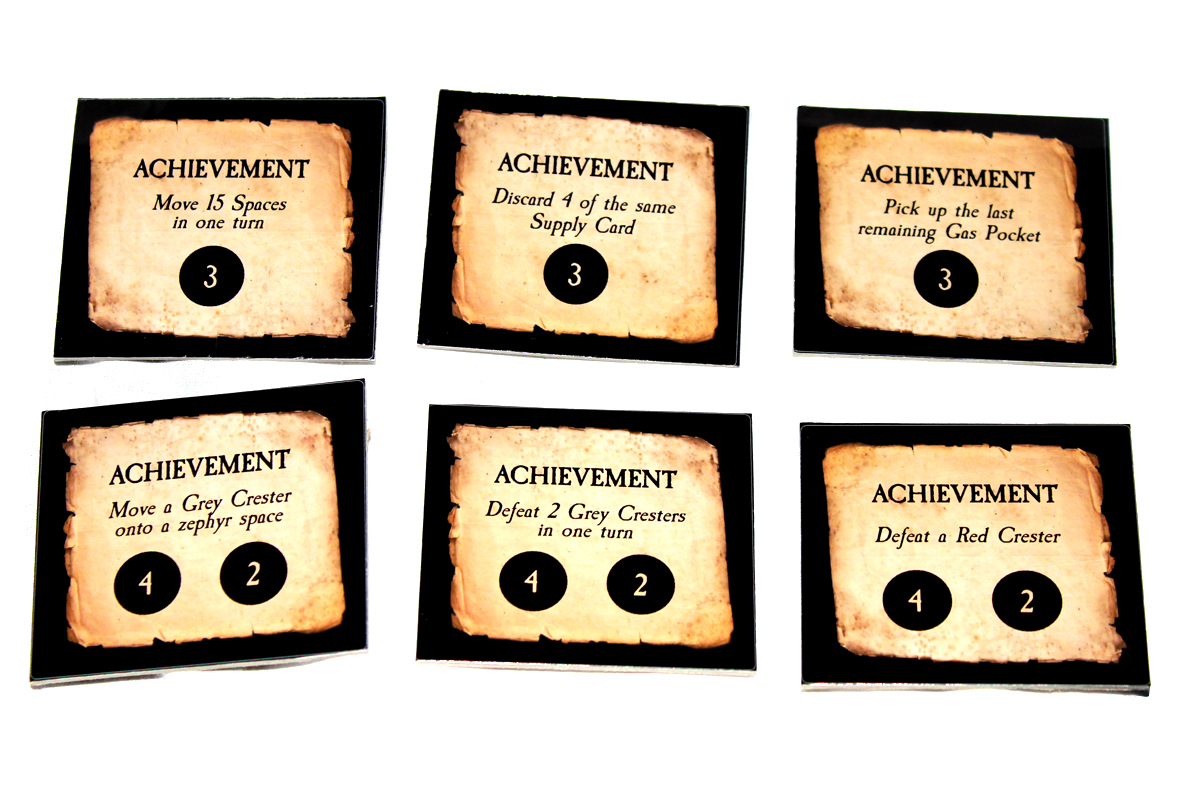 You’re all ready to start! 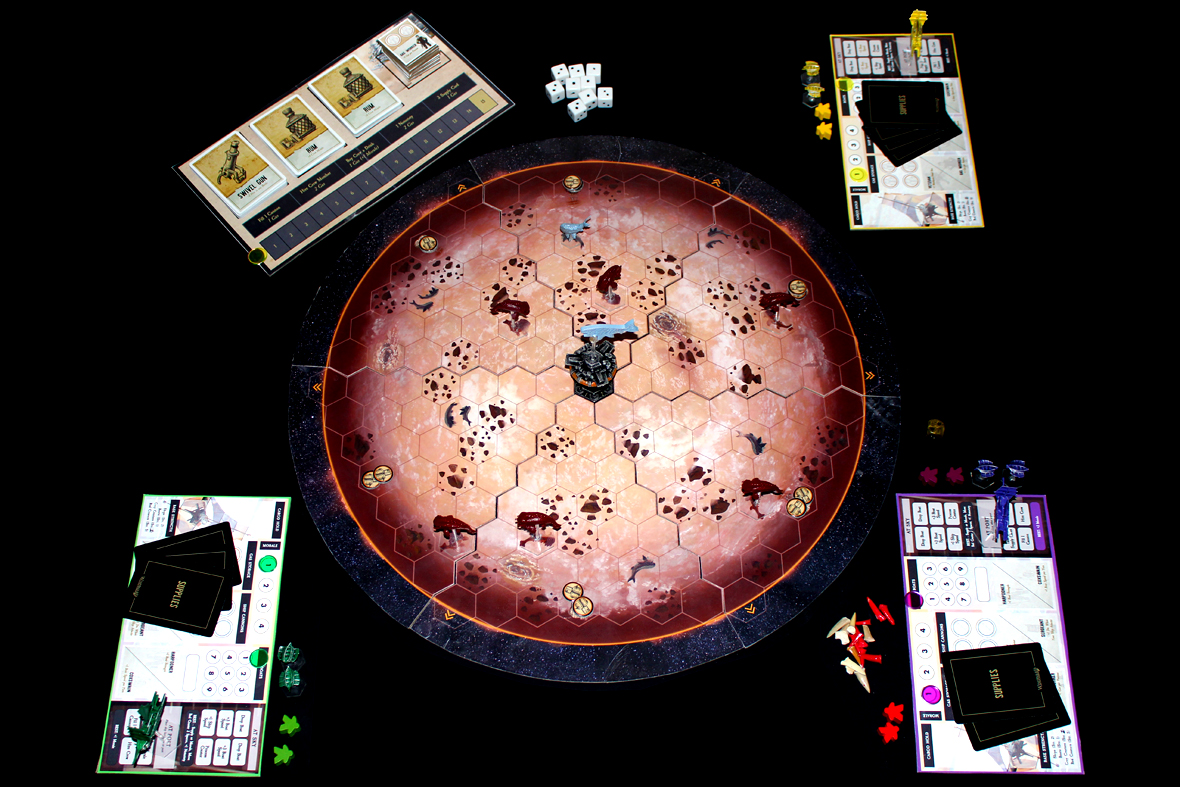 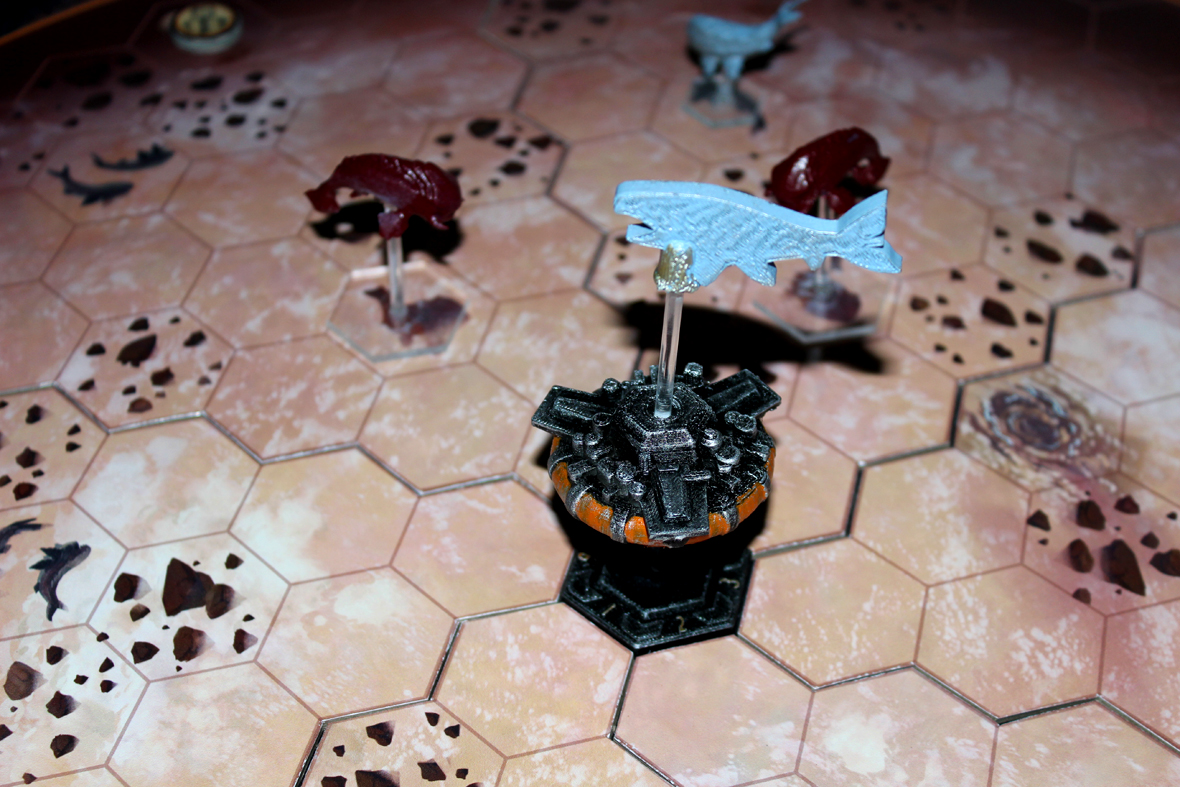 Over the course of a game of Windward, you seek to make a name for yourself as a great ship captain of Celus. You do so by accruing notoriety through doing impressive deeds and also mildly unscrupulous things via the practice of Space Whaling, or hunting Cresters. You can also fight other people, if that’s what you wanna do.

One thing worth noting is that there are two heights — Ships and Red Cresters are above Boats and Gray Cresters, so they will move freely through each other’s spaces since they’re not on the same level. 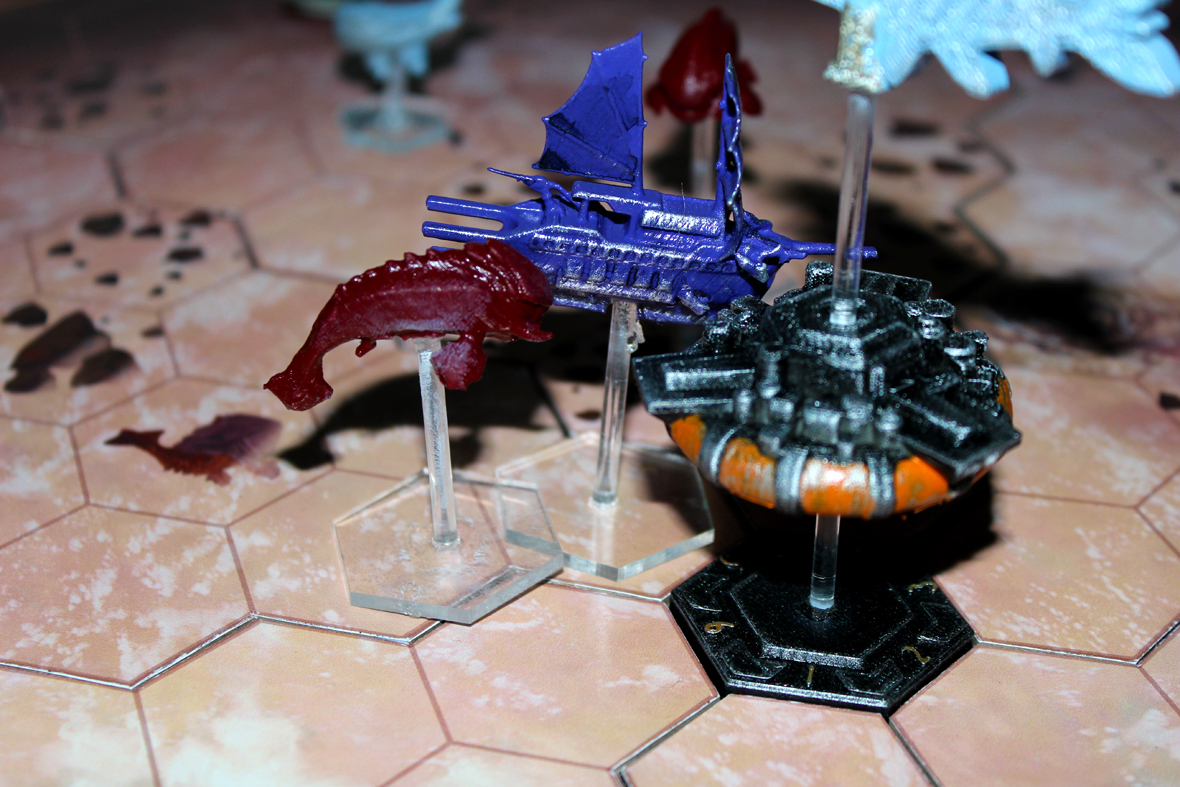 On your turn, generally, you may use two of your Mate tokens (they’re meeples in this preview; delightful) to take two basic actions. If you’re in the Sky, you may also move your boat up to your Boat Speed. More on that in a bit. The actions depend on whether or not you’re At Port or in the Sky, though.

When at Port, you may spend gas tokens to hire crew, increase your Notoriety, gain supplies, or other actions. Their costs are indicated on the Port Board.

While in the Sky, moving can be done a number of spaces up to your ship speed. If you’re moving in the direction the wind is blowing (since it always points towards the edge of a hex) movement is free. If you want to move against the wind, you cannot. Wait until the winds change.

There are also vortexes! If you go into one, you can emerge out of one of the others. Like the classic Burgle Bros. Secret Duct, our first game had two of the vortexes almost adjacent to each other. Very exciting.

You may discard any Supply Card any number of times during your turn to execute its effect. 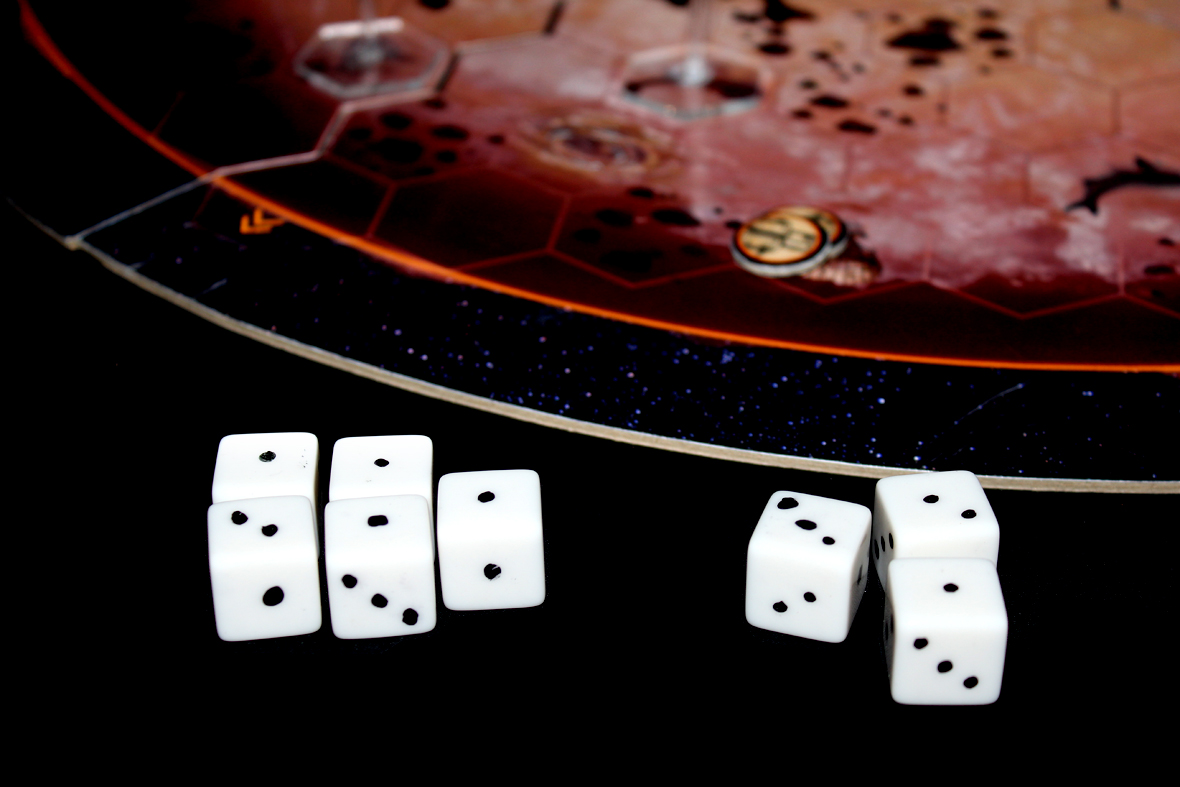 If you want, you can fight just about anything that moves. Use your starting strength, and take some of the battle dice and roll that many. Before you roll, you may spend cannon tokens to take an extra die. After the attacker rolls, the defender may do the same (remove cannon tokens, if applicable, and then roll that many dice).

The attacking player may now play cards and markers to increase their total attack value. Note that +2 Markers give you +2 to total attack value; they don’t grant you two additional dice. Then the defender, again, does the same thing.

Whoever has the higher result wins! If there’s a tie, the attacker returns to their space and takes a +2 Marker without further consequences, but they cannot make the same attack again this turn. Red Cresters in a tie will not move at the end of the turn. 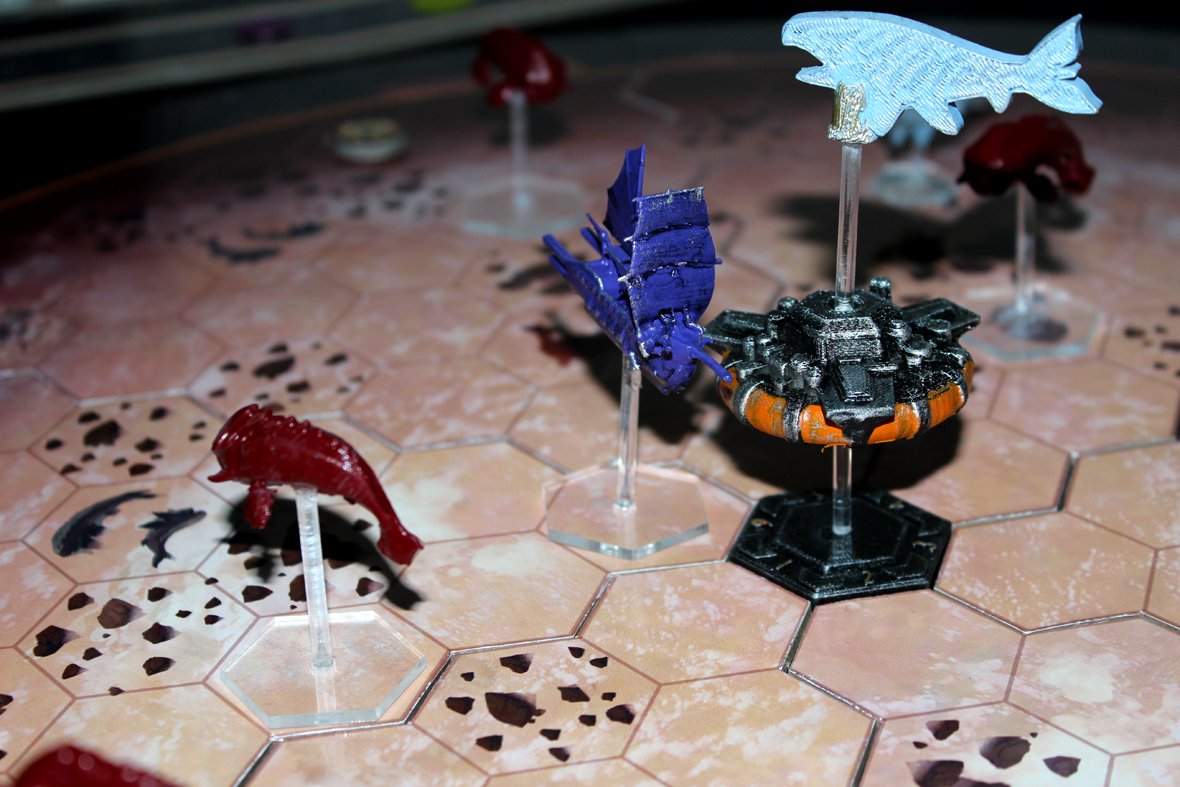 The end of your turn changes depending on whether or not you’re in the Sky or at Port. 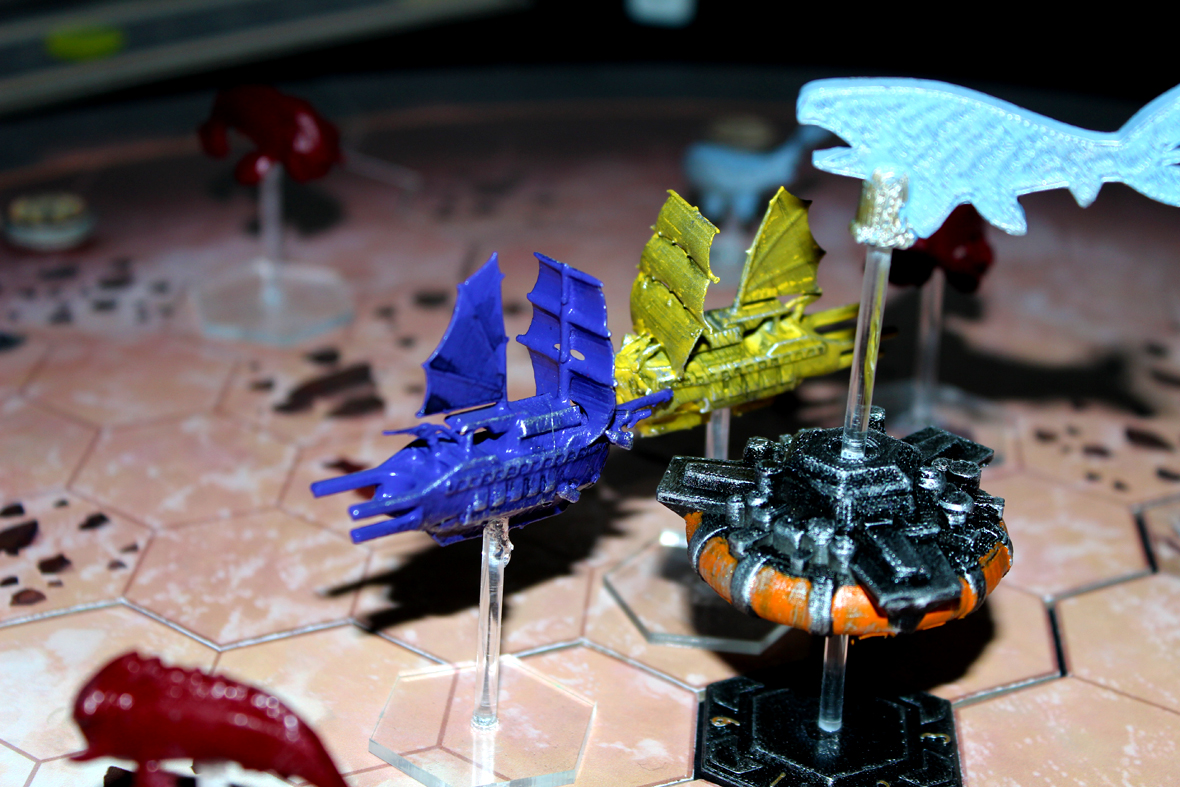 Once a player has hit or passed the final space on the Notoriety Track, the game will enter its final phase. Every player after that player gets one additional turn, and the player with the most Notoriety wins! If there’s a tie, play another round.

I think my major concern about Windward at higher player counts is the heighted level of inter-player conflict. I generally don’t like games with a lot of that between players, as it can get dogpiley in bad scenarios but will also generally slow the game down if you have to fight through a horde of angry opponents to deliver anything. At two, I don’t think there’s as much of an incentive to do that; you can, if you think they’re about to win, but generally it makes more sense to just chase down Red and Gray Cresters as quickly as you can to build up your point-scoring engine. I think at four, the game trends too long for me, but I’ve enjoyed two and three players. It really depends on how much you enjoy the inter-player battling portion of it. It reminds me a bit too much of Betrayal at House on the Hill, but with pretty severe penalties if you lose (if you are Defeated, you drop your inventory, which is well within the variance of 3+ dice). Your mileage may vary, though. 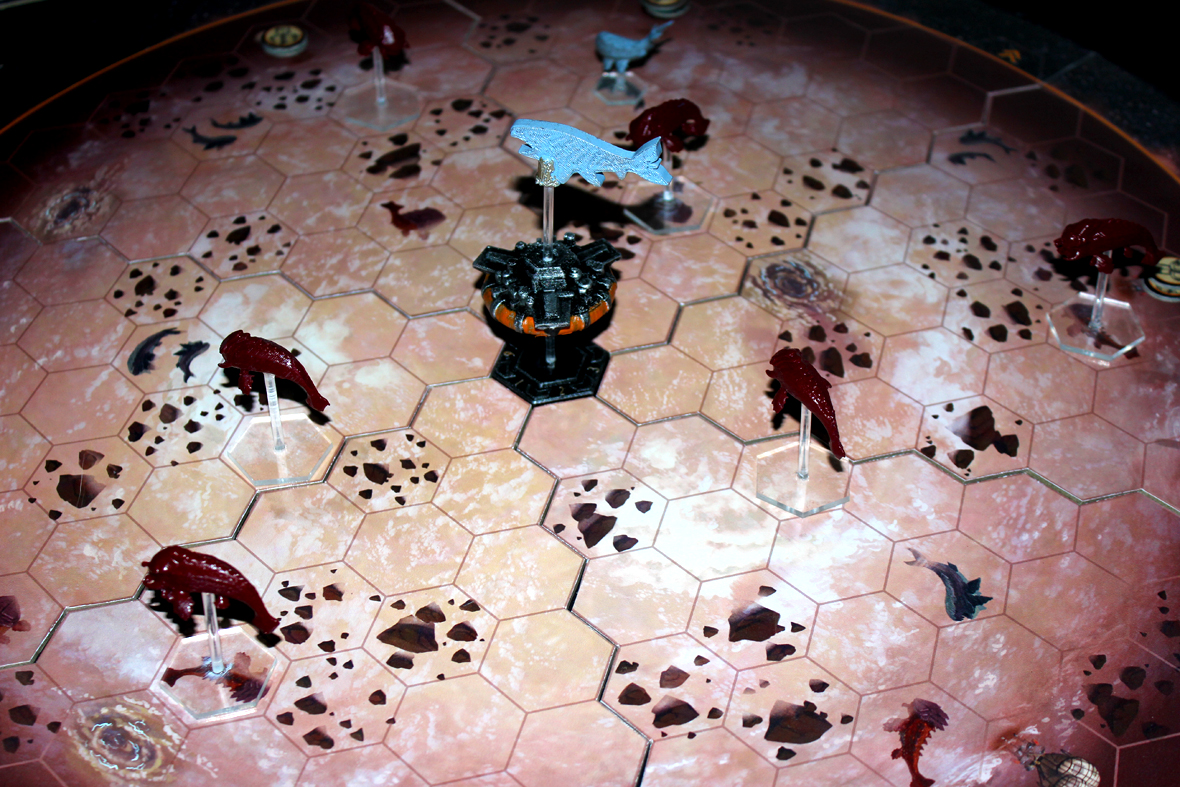 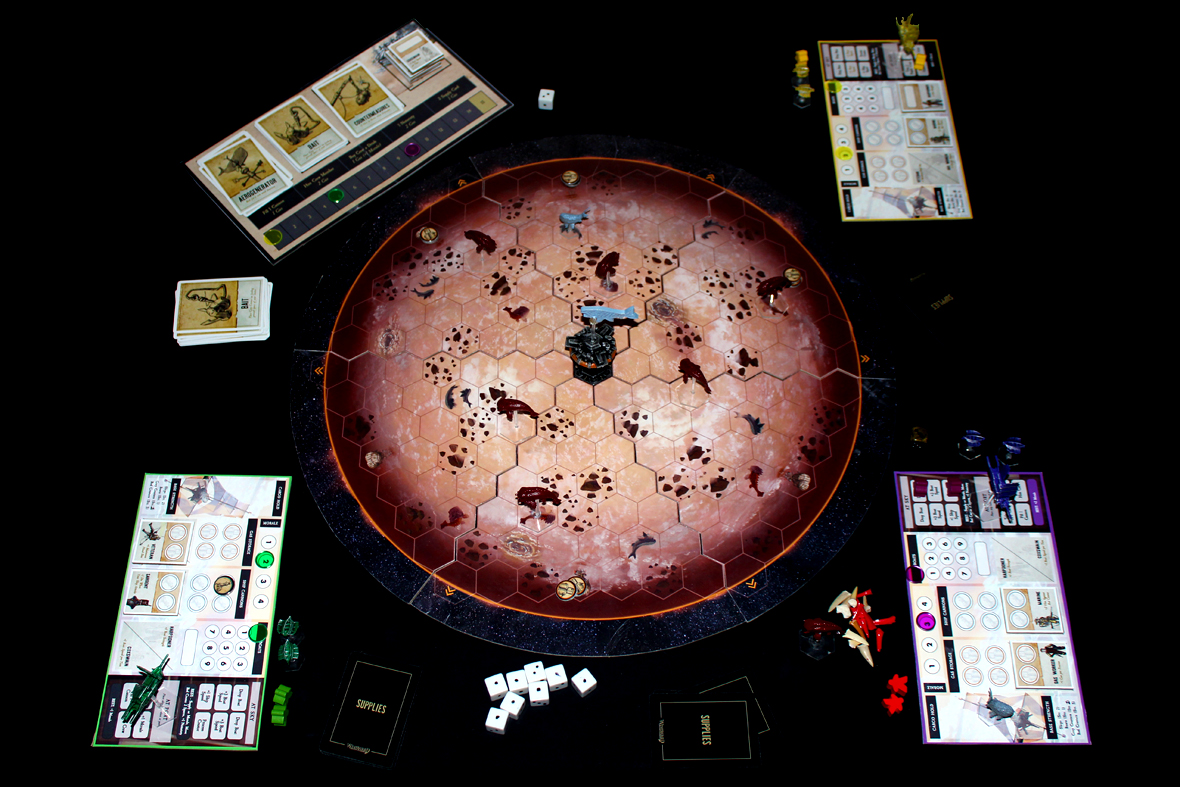 Windward is certainly an interesting game, and I’ve enjoyed my plays of it! I think, if I’m being honest, I think it’s a solid game, but it’s definitely not the genre I typically enjoy playing. The emphasis on interpersonal combat is usually pretty exhausting, and with too many players the game can devolve into a slapfight while players try to rush a full cargo hold back to a Trading Post to score. That can feel a little irritating, especially if you’ve got a player circling the Trading Post like an obnoxious vulture. That said, there are things I definitely like about Windward, too! I think the elevation system is pretty inspired, and it looks great on the table during play. Thematically, I think moving it off-planet to stay away from real-world issues about whaling is enough for my brain, but I wonder if people more sensitive to the topic than I am (which, admittedly, I’m not very sensitive to it beyond “I like whales”) will find there’s enough distance between the themes to not bother them. The wind movement system and being able to loop the entire planet is pretty cool, not to mention that a modular board always wins some points from me for variability (plus, it looks cool). Anyways, I’ve enjoyed my plays of Windward, and if you’re looking for an interesting game that combines pick-up-and-deliver, combat, minis, and planetary resource management, you might enjoy Windward as well! I’d at least check it out for the minis.