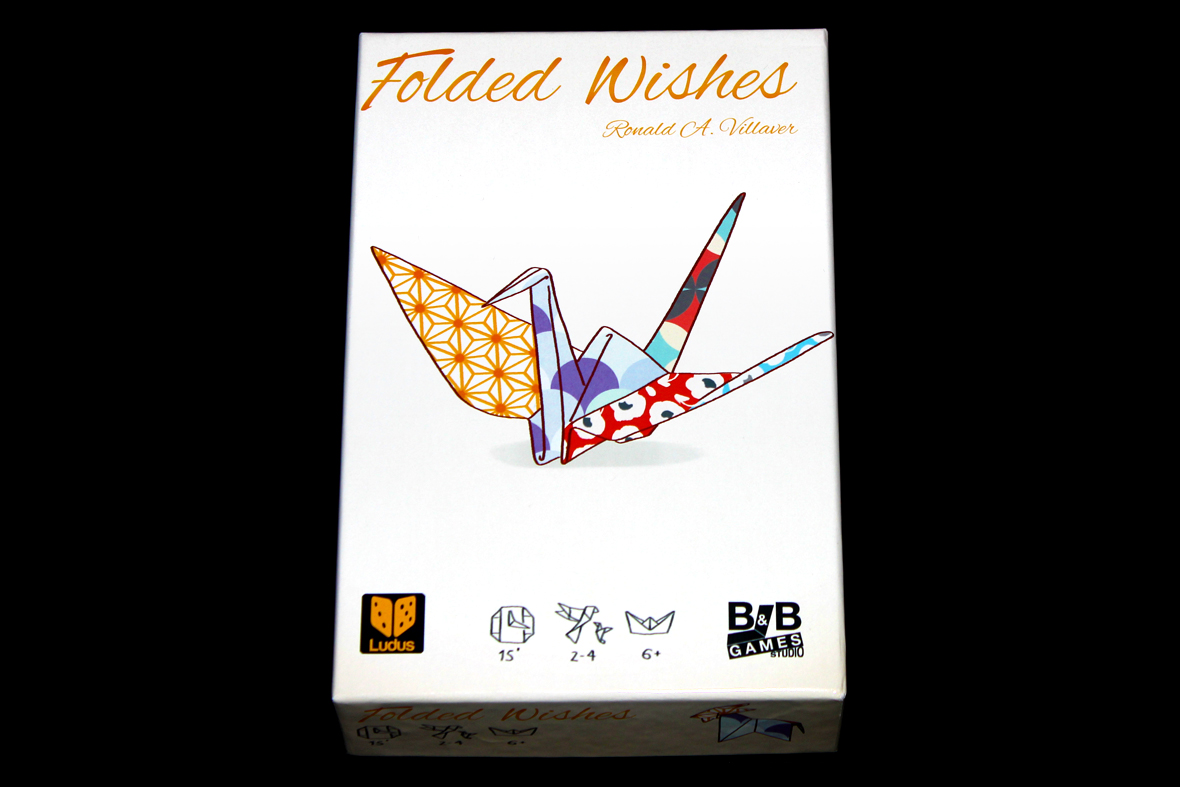 Full disclosure: A review copy of Folded Wishes was provided by B&B Games Studio. It’s not a release copy, so there may be some inconsistencies between my copy of the game and the final version; I’m told they’re mostly aesthetic.

Alright, we’re in the thick of it now! Gen Con releases! What an exciting time. Or, rather, games that are coming out around Gen Con time and I got review copies of at Gen Con! That takes longer to say, but, you know, for y’all, I’ll put in the extra effort. Also to just arbitrarily pad the length of these reviews. Got to get to two million words somehow, right? Right. Anyways, Folded Wishes is one such game, so let’s get right down to the review!

In Folded Wishes, you play as origami crafters attempting to earn the favor of the Emperor, who is super impressed by origami. To be fair, I’m the same way with both origami and balloon animals, so, I don’t really have a joke; it’s just a statement that that is reasonable. Fold, crease, crumple, and swap your way to victory and become a Master of Origami!

First, determine your player order, and give each player the appropriate starting tiles: 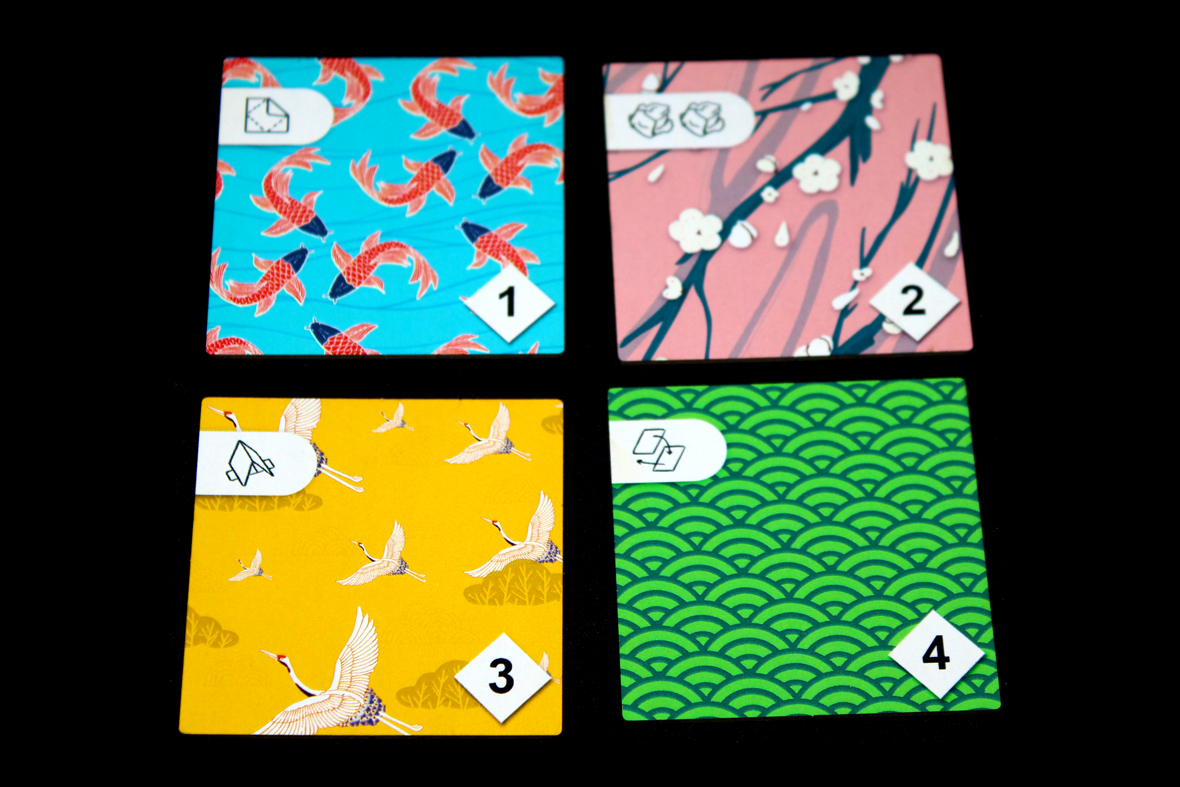 They come with their own corresponding Skill Cards: 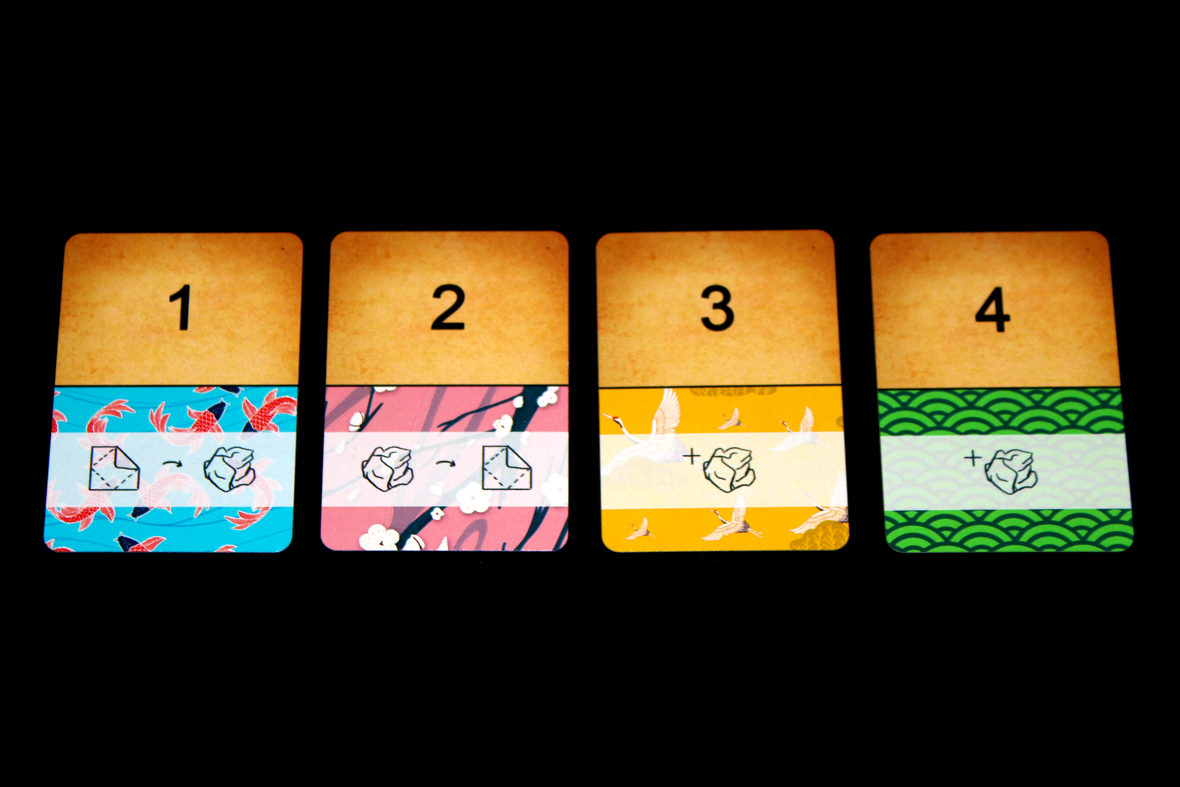 Shuffle the other ones: 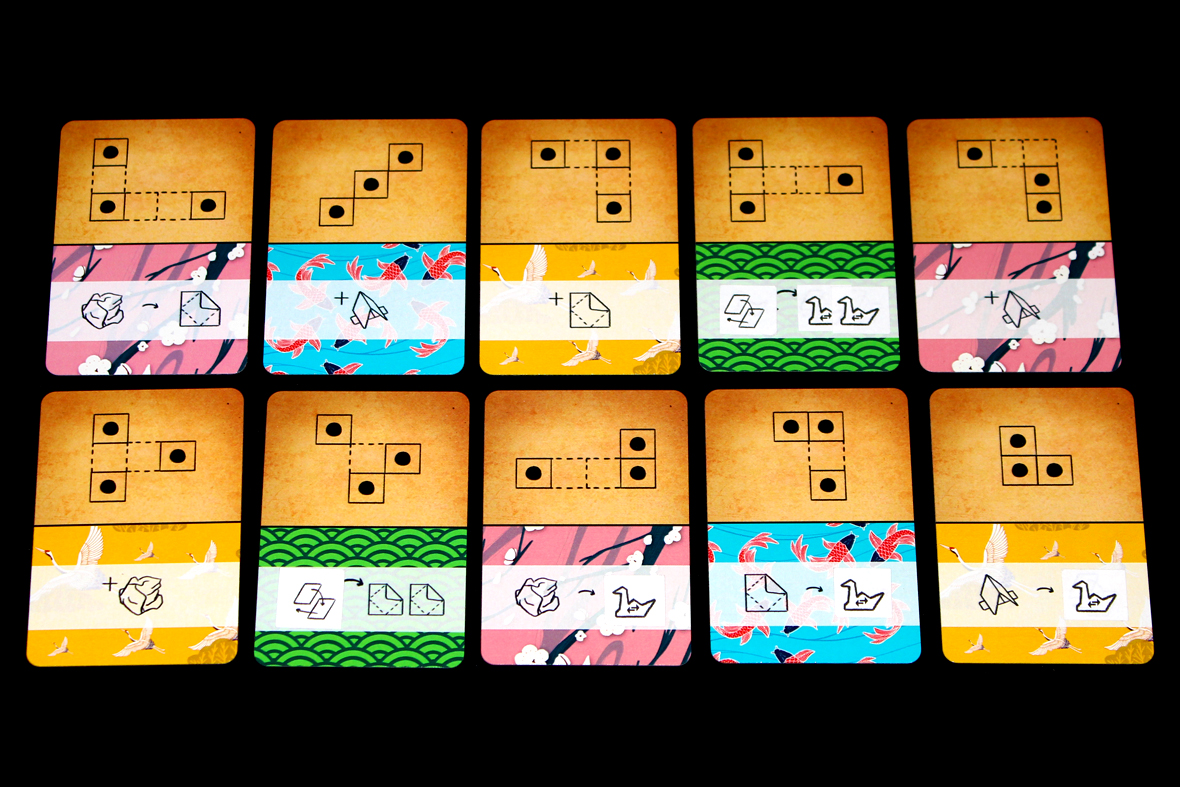 Put 8 on top of the Master Skill Cards: 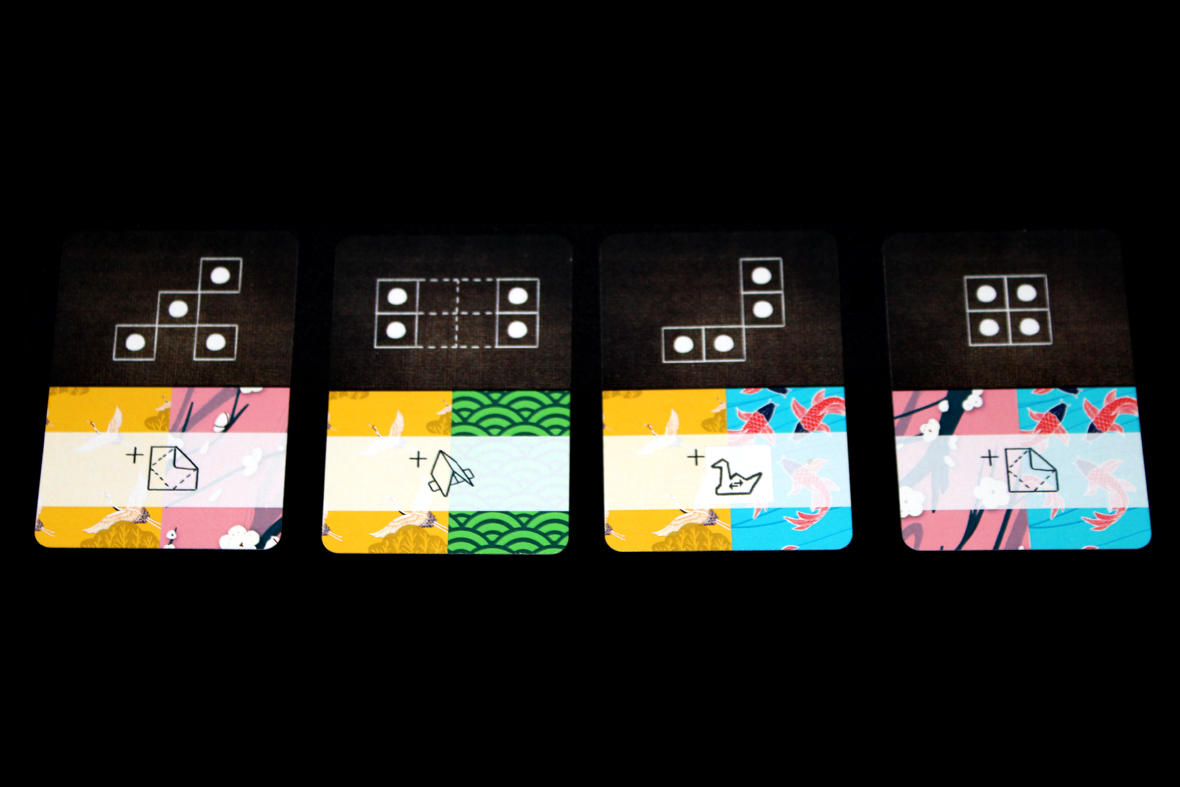 Give each player a character card and then four character meeples in their color. Note that, again, this is a pre-release copy, so the meeples I have here are not the ones in the final version:

Shuffle the tiles up and make an arrangement: 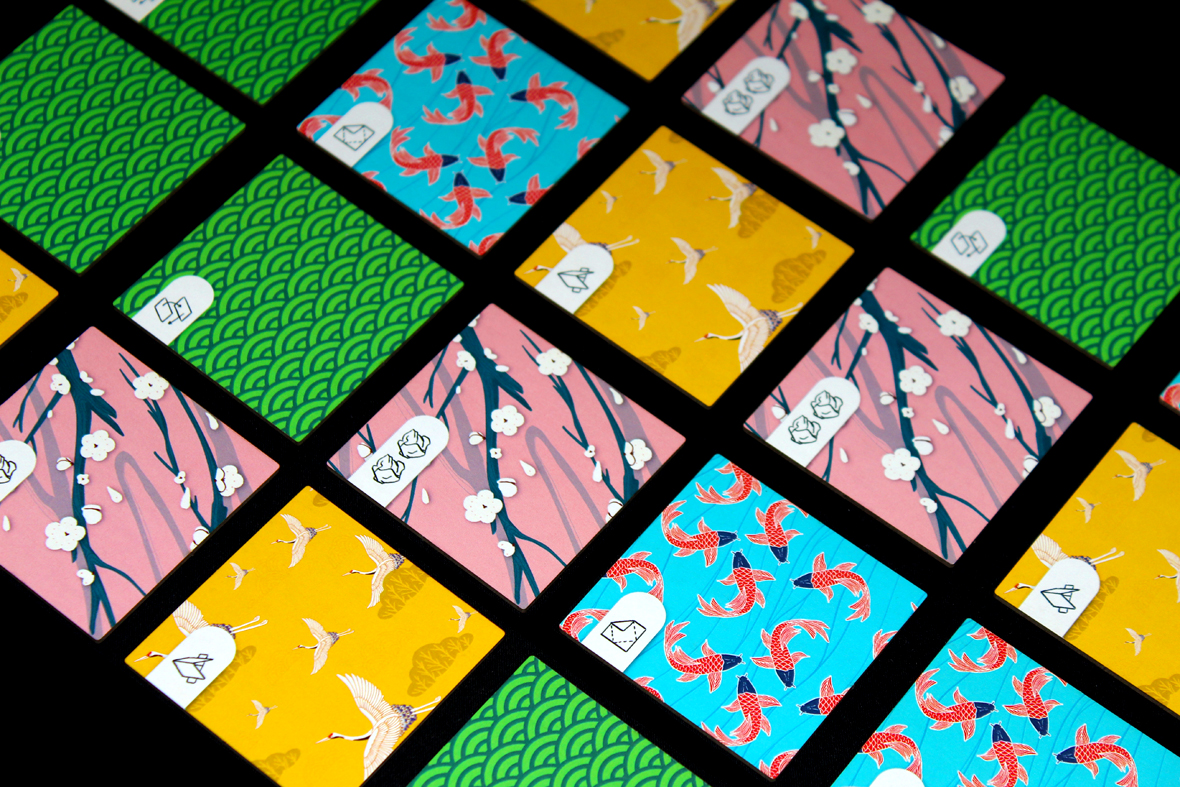 Now, have each player place an animal on a spot on the grid, and you’re ready to start! 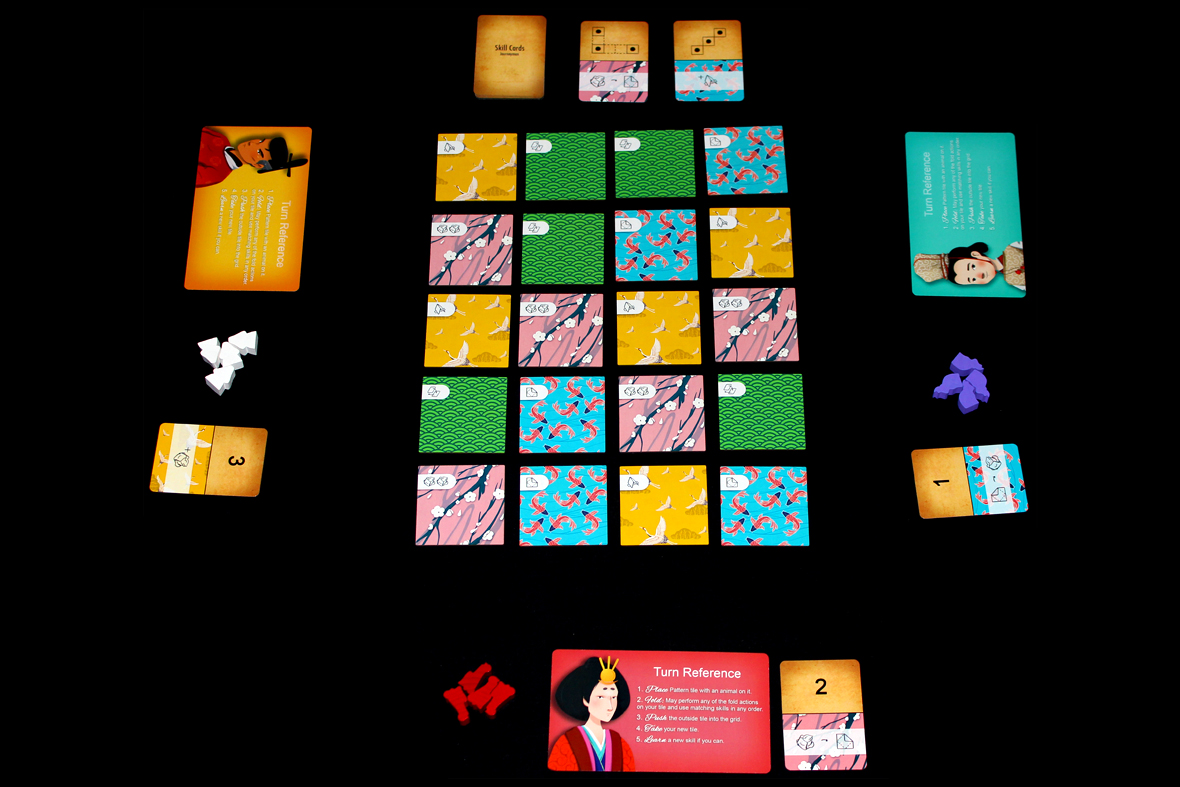 Don’t forget to have each player add a meeple! 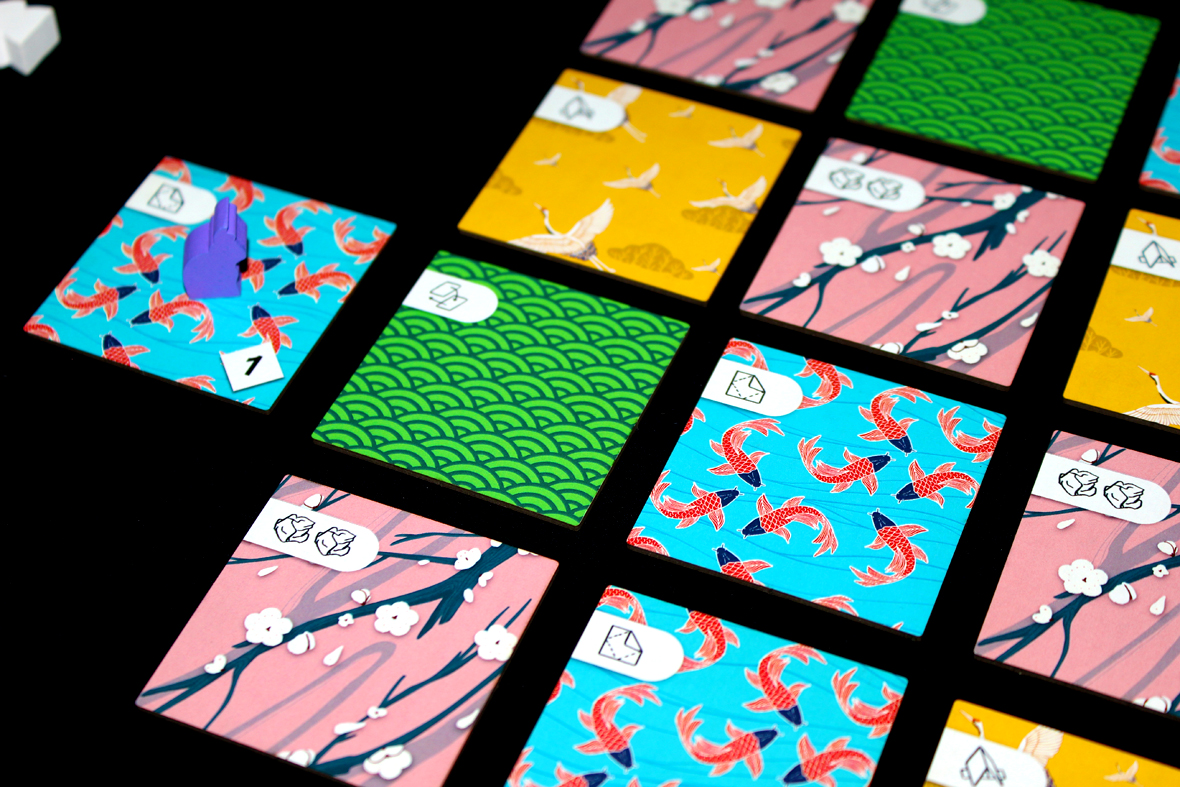 So, Folded Wishes is primarily an abstract strategy game. That means you should expect some sliding, some tile movement, and some piece placement and movement in this game. Your goal is to get your four pieces in a straight line by any means necessary. Horizontal, vertical, diagonal; any line is a good line, and you’re going for it. First player to do so wins! 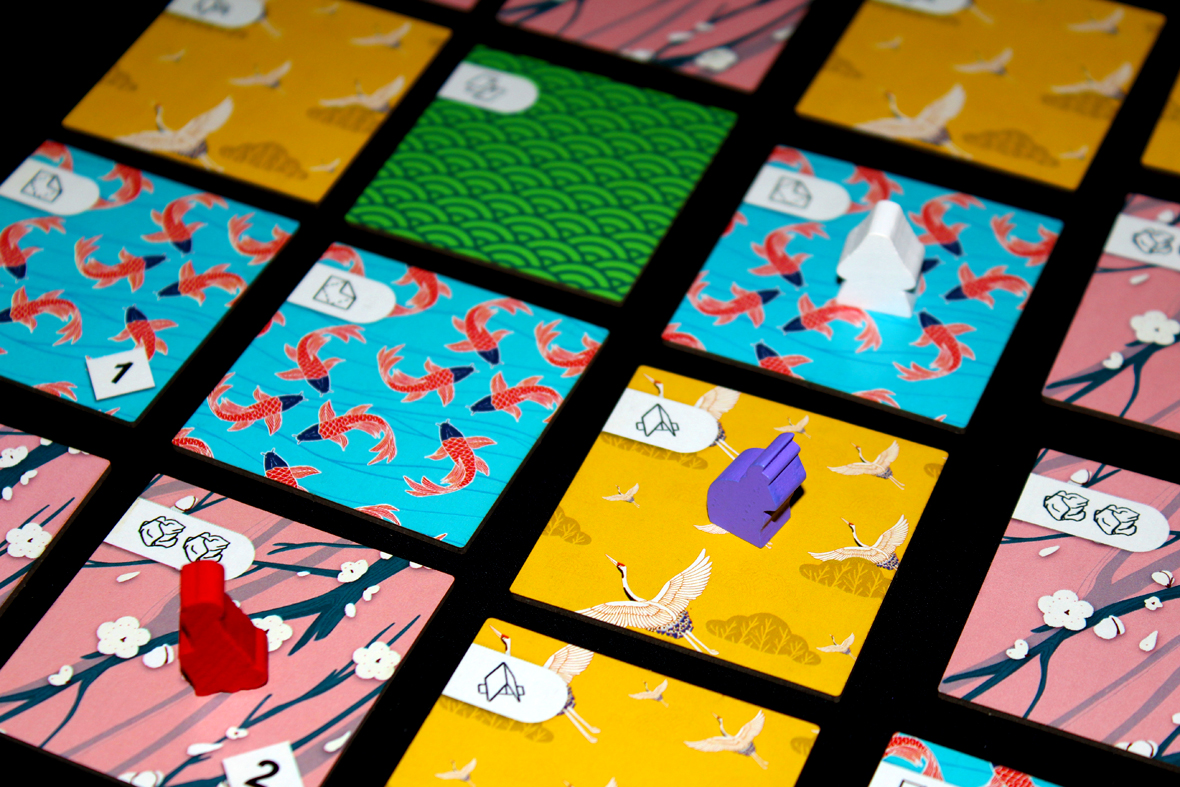 You play the game over a series of turns, and your turns go like this: 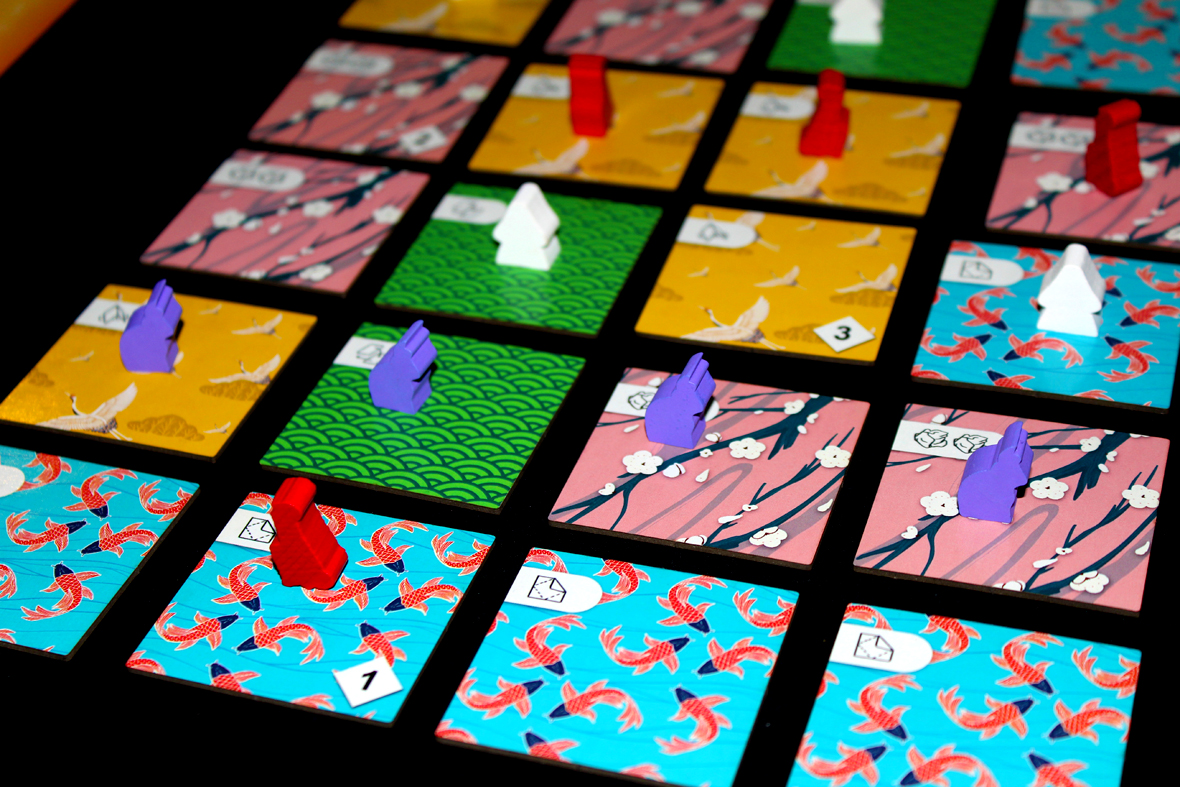 You may continue that until one player wins!

Play normally, but each team gets only one set of colors, you use a 4×4 grid instead (as you would in a two-player game) and players 3 and 4 each place an animal on an unoccupied tile during setup. It plays the same as normal, but you don’t share skills with your teammate. 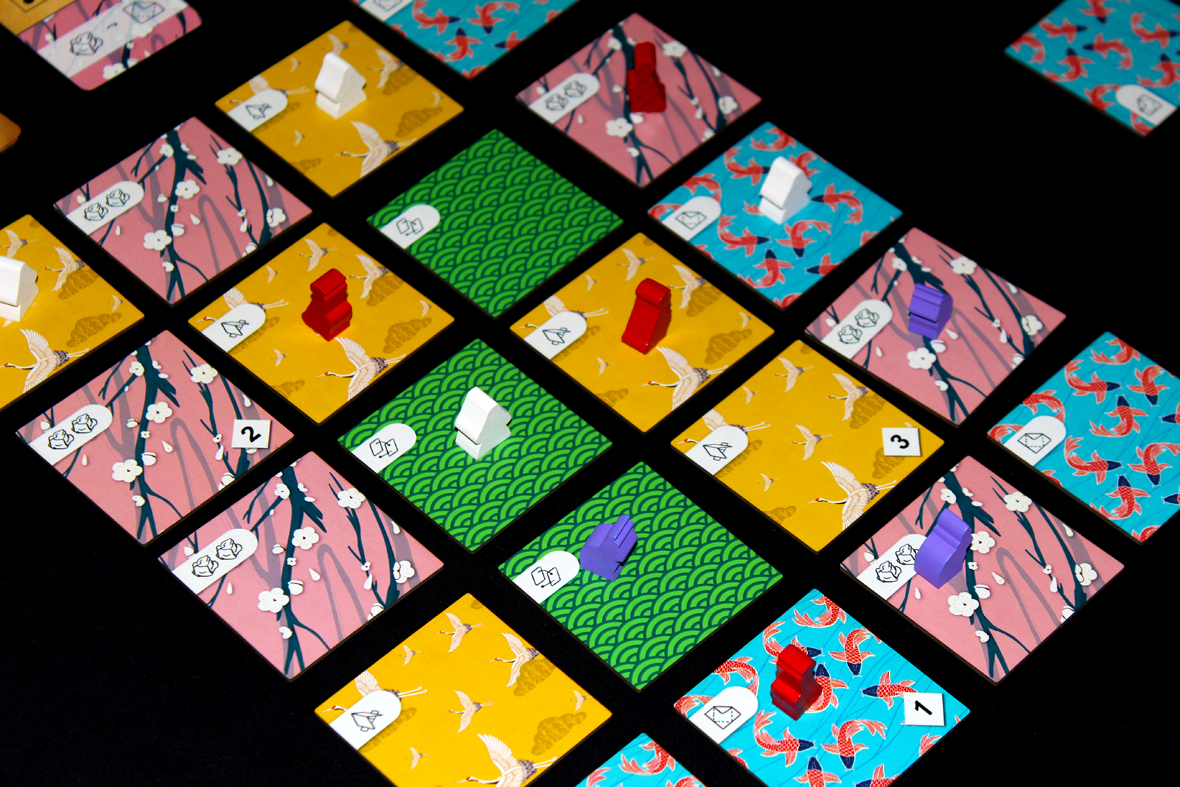 I mean, the major difference is that the board is smaller at lower player counts. As with most abstracts that require a specific setup, it’s harder to win at higher player counts since there are more players that can gang up on you between your turn. Something that this game does that I appreciate it make it easy for players to accidentally set you up, though; it’s very easy to get into a position where you might be able to win on your next turn, since the board real estate is fairly limited (as only one animal can be on a spot). If you have the right skills, your opponent may very well give the game away unintentionally. That doesn’t happen as much at two players; you really need to make it hard for them to block you since you’re the only thing that they have to focus on. Either way, I wouldn’t say it takes much longer as you increase the player count due to that, so no real preference on player count for this one. I will say that I prefer other two-player abstracts, personally, so I probably wouldn’t play this one at two. 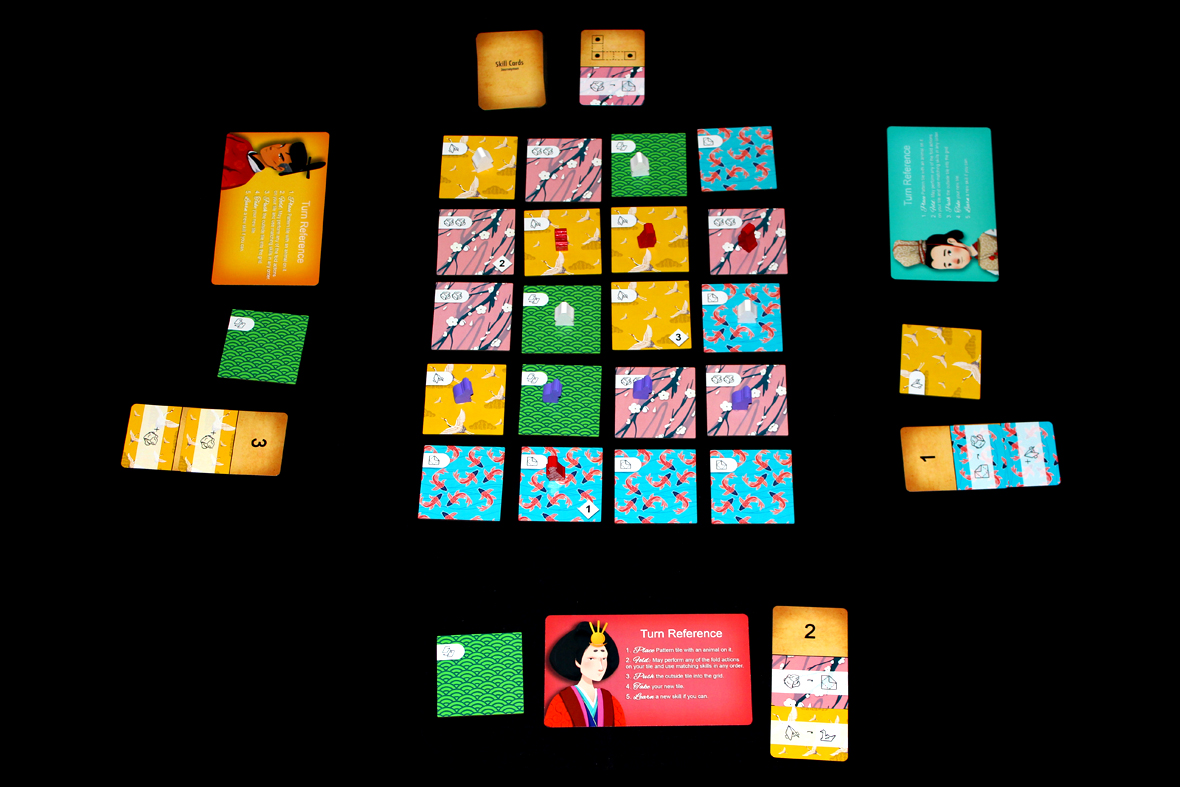 Overall, I think Folded Wishes is pretty fun! It’s a very quick abstract, which occasionally will throw some players off. I try to remind people that, at the end of the day, it’s a 15-minute game where you’re trying to get four pieces in a row, and once you do that you win. What ends up happening more commonly is players try to go after skills and build up that engine, and before they can even get the engine built the game has ended. To that end, I think a minor complaint of mine is that the game seems to benefit experienced players to the detriment of novices, since they have a better sense of when and how to value skills that I haven’t always seen from newer players. I do like how Skills are organized, though; it’s reminiscent of Roam in a way that I like (and, as I’ve mentioned a dozen times, I’m all about those types of games). Beyond that, it’s a pretty game, but I can’t help but feel like the theme doesn’t really shine through in the gameplay. I get that folding is a fairly abstract concept to represent on a 2D level, but it doesn’t feel like it’s really coming through when I play. It feels more like a 2D abstract game, and that’s fine, but I would have liked to have seen more from it in that regard. It may also not be helping that my pieces are sort of random tokens with the correct color, but that’s the nature of the beast with these sorts of things. Either way, if you’re looking for a quick abstract or you love colorful games, you might like Folded Wishes! I’ve enjoyed my plays of it.