Full disclosure: A review copy of Monochrome, Inc. was provided by KOSMOS.

No more EXIT games for a bit. Yes, to my great disappointment, they actually have to keep making them since we’ve kind of hit the tail end of the English-language versions. Alas. In the meantime, though, the fun doesn’t stop with KOSMOS; we have Adventure Games, now, too! They’re meant to hearken back to a bygone era of computer-based narrative-driven adventurey games, like King’s Quest or Monkey Island or something. I was a bit too young for all of these. Either way, let’s see how things are with the first one, Monochrome, Inc.!

In Monochrome, Inc., you play as recent recruits asked to do a bit of, you know, the usual industrial espionage (and some sabotage, if you’re lucky). There have been mysterious goings on at Monochrome and the team sent in before you hasn’t come out. Just like Luigi’s Mansion, you say, fully aware that a lot of people won’t get that reference. Either way, the task now falls to you. Can you figure out what Monochrome is up to and put a stop to it?

Don’t look at the fronts of any cards. That may cause you to get story spoilers.

Set up your Characters, first:

Each player should choose one, along with their associated card. For a solo game, play with two characters and take both of their cards. Now take the A / B / C / D Level Cards and make a vertical stack of them (with A on the bottom, and B above it):

Place alarm level cards A1 and A2 on top of each other: 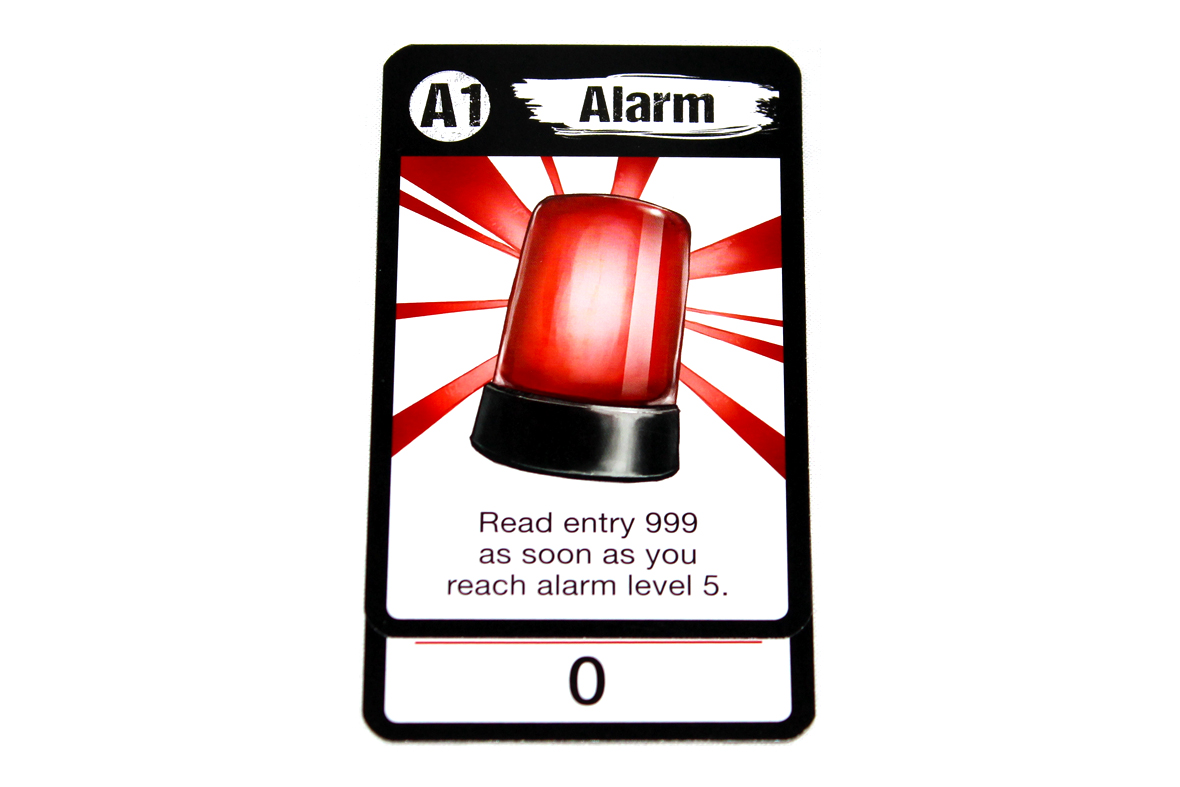 Set the cards nearby:

Once you’ve done that, you’re basically ready to start!

So, remember old computer-driven adventure games? No? Neither do I. But that’s okay; that’s what this game is all about. We’ll talk you through it. You’ve been sent to Monochrome, Inc. to get more information about their newest drug and do some industrial espionage. Get in, get the information, and get out with your lives, preferably. That would be nice.

What happens is a series of turns, each with five steps:

Let’s go through each (except for the last one; I hate redundancy):

Now, move your character to a new location. You may either use the elevator(s) to move freely between levels depicted on their cards, or you may move to another location on the level you’re already on. Just be careful; as mentioned, the elevator is considered part of the level it’s currently on, so make sure you don’t drag unwilling participants somewhere dangerous.

You do have to move somewhere, either onto or off of the elevator or somewhere else in the level.

If you move to a level that is not revealed yet, flip it over and reveal it. Also, read the text for that level card from the Adventure Book.

Now, take one action. You must do any of these:

There are technically three chapters per game. At any point, you can end the game and come back to it by just taking a picture of your state and putting everything together in the box, which is nice.

Either way, the game ends once you’ve completed Chapter 3! Tally your score and see how you did!

The major difference is that at higher player counts, you need the extra levels of structure provided by the game to be functional. At two, you might as well play it as though you’re one congealed mass of players that kind of go everywhere and do everything together. At four, you can divide and conquer in a more useful way (and split up the reading, I say hoarsely). That said, there’s a lot more downtime since you’re not actually in control of the other three characters. I tend to prefer this game when it’s more active, so I’ll likely stick to two, personally, but if you’re looking for a strong narrative-driven experience for four this is certainly not a bad option.

Overall, I thought Monochrome, Inc. was pretty fun! I think that it’s not a bad first foray into narrative games, though I’d still recommend taking some pointers from other narrative games with regard to how they handle possible spoilers and the ability to accidentally read ahead; I ended up with a lot of information I didn’t want about the game just from trying to find my entry, not to mention that for a given item if you look it up it basically shows you everything that it can possibly combine with, which isn’t awesome. That and a slightly disjointed narrative feel like growing pains to me more than Actual Problems, though; I’ll be interested to see what the general take on these is and how KOSMOS incorporates that feedback into future iterations of the games, since I doubt that these are the only Adventure Games to come out. It’ll be nice if they start inching just a bit closer to the EXIT games, though; most of my favorite EXIT games have some sort of overarching narrative, but they’re more puzzly than the Adventure Games. A happy medium between the two would be a really fun experience, for me. That said, there’s a lot to like about this. I love the ability to combine items and use them with locations, and I felt like that was solidly implemented. Additionally, boxes this size used to stress me out a bit because these were always EXIT games and I’d have to destroy them, but not this time. This game’s got the ability to both save its state and replay it! And it actually makes sense to do so, as your character choices influence a few different things about the game. If you’re excited about spending a big chunk of your day on a narrative adventure, I’d recommend checking out these Adventure Games! I’ve liked what I’ve seen of them so far.