We’re back with more games from Blue Orange! I’ve got two right now (maybe a third; we’ll see if I can borrow it from my coworker): Kingdomino Duel and Slide Quest! I’ll be covering them both in the next couple weeks; very excited to see what’s going on with them. Kingdomino Duel is Blue Orange’s 2p response to the now-classic Kingdomino, which took the Spiel des Jahres a few years back (really competitive year, since it edged out Magic Maze and The Quest for El Dorado; all excellent). Let’s see how it’s different than the base game.

In Kingdomino Duel, you need to amass territory for your realm! Naturally, you have to share the land somewhat, so you’ll split it with another up-and-coming noble. Don’t worry too much about disputes; the local wizard has agreed to serve as an intermediary, and should you impress him, he may give you a bit of a boon with some of his magic. Seems like cheating, but magic usually does. Will you be able to build the greatest kingdom of all?

Not a ton to do on the setup side. Both players are going to need a sheet:

Place a third in the middle of the table with the spellbook side up:

Set out the dice:

Choose a player to go first! 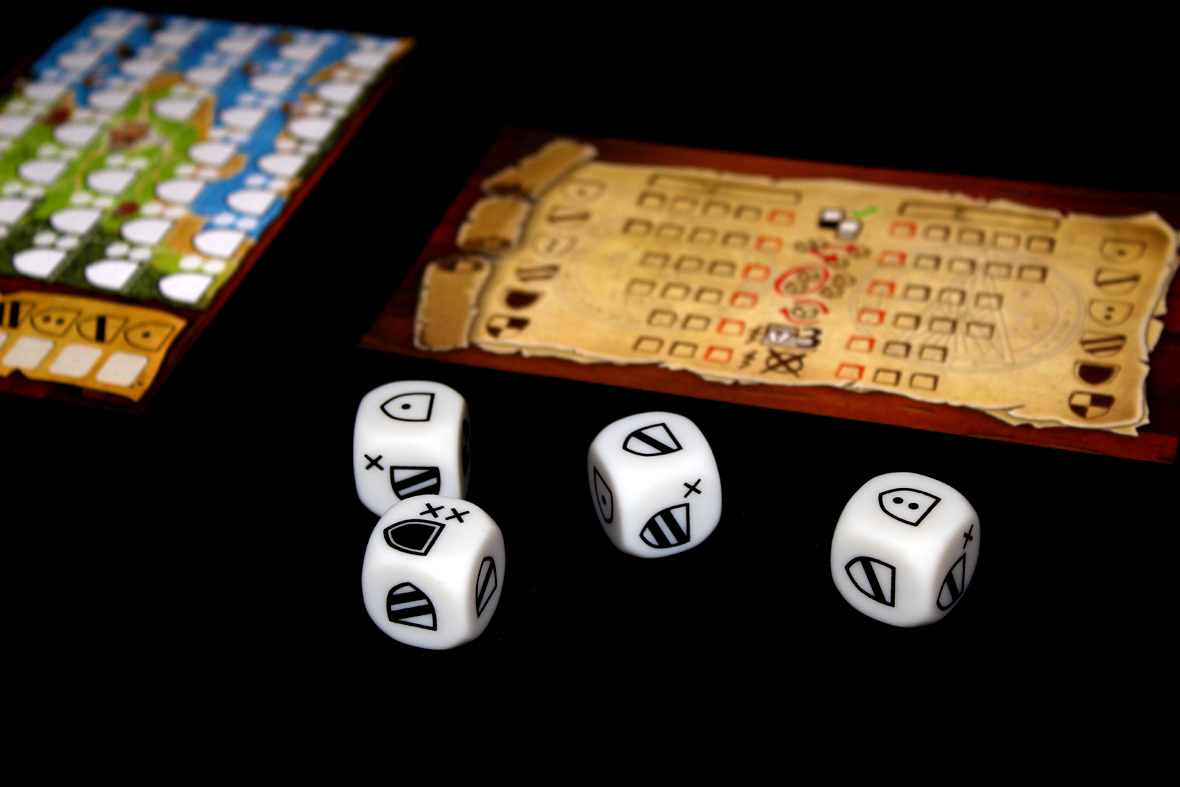 So the game’s got a lot of similarities to Kingdomino, but it’s a roll-and-write, so that’s going to introduce some new mechanics. The game’s played over a series of rounds until either one player fills out their board or both players cannot place a domino. Either way, you’ll alternate being first player and doing some phases. I’ll cover each in turn.

The first player rolls the four dice. There’s not much more to it than that and I regret making this a whole section on its own.

Next, add your diemino to the map by drawing the symbols on each die on two empty and adjacent spaces (not diagonally) on the map, following at least one of these rules:

Beyond that, go wild. Drop it, flip it, reverse it; whatever you want. If there are crosses on the die, fill in the circles on the space with the appropriate number of crosses. If you can’t add your diemino to the map; do nothing. 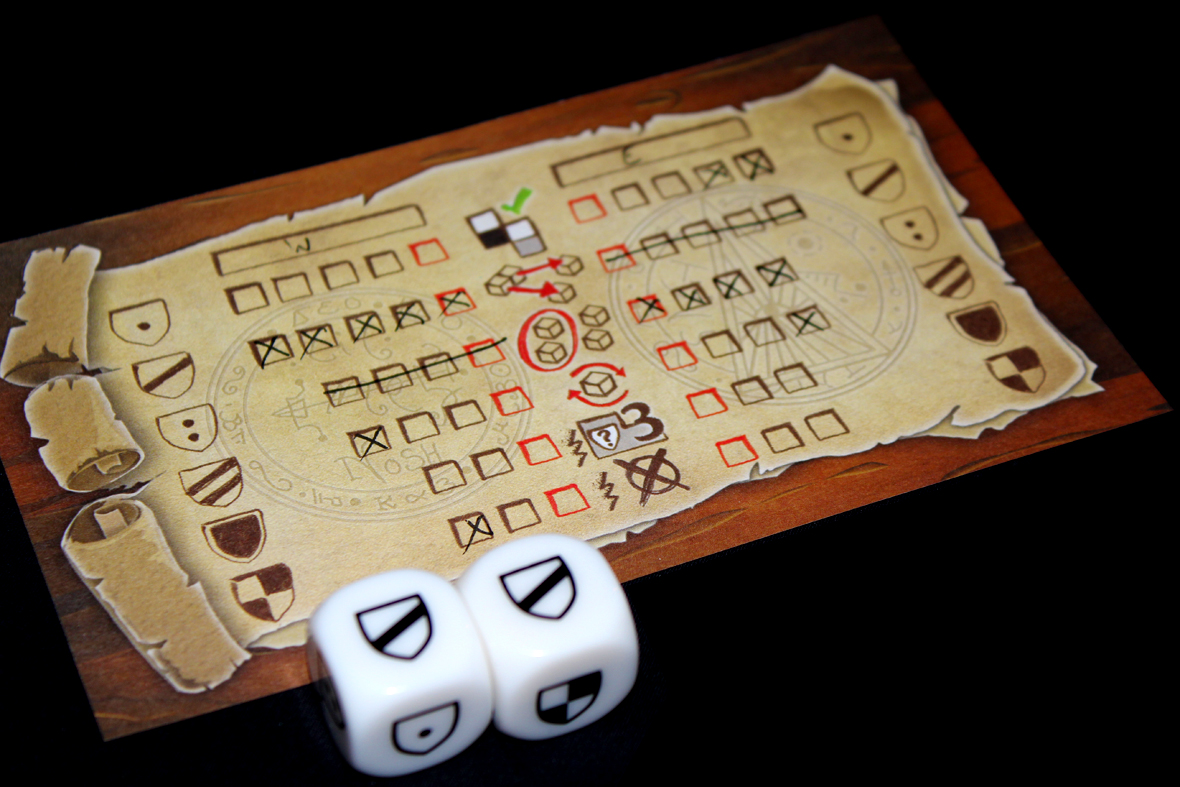 After filling out the map, you need to go to the wizard. Every time you add a coat of arms without a cross to the map, fill in the corresponding square in the spellbook. If you are the first to completely fill in the line (in the event of a tie, the first player this round wins), you gain the wizard’s power! It’s a one-time use, and your opponent cannot gain it for the game. These abilities allow you to do various things like split up your dice, go first even if it’s not your turn, ignore Connection Rules, change one of the dice you took, things like that.

As a bonus free action, you may color in the roof of your castle to add a cross to one of the dice you just took this turn. You may only do this once per game. 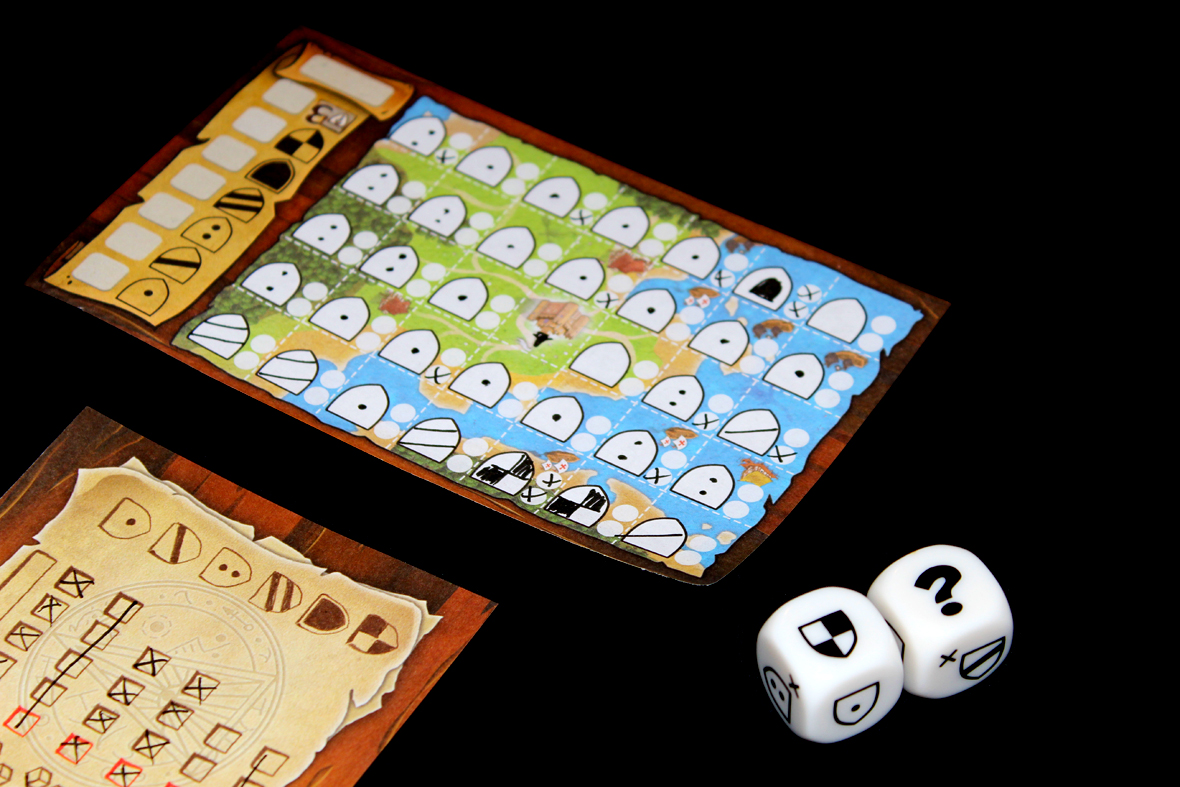 Like I mentioned earlier, when one player fills out their map or both players can’t play their diemino, the game ends. Calculate your score by doing a similar thing to Kingdomino — essentially, count each contiguous group of tiles (a “territory”), and then multiply its size by the number of crosses it has to get its value. The castle does not count as a tile of any type. Add in any bonus points, and the player with the most points wins!

Overall, though, I think Kingdomino Duel is fine. Its main issue is that it comes at the approaching end of two curves: the “duel games” craze and the “roll-and-write version” craze that’s been hitting a lot of games lately. Don’t get me wrong; that’s not always bad. Imhotep: The Duel is quite fun, in my opinion, and Lanterns Dice is every bit a worthy adaptation of the classic game. Something about this one just doesn’t quite work as well as those two, though. It ends up feeling a bit hollow, being honest, as though something was supposed to be in the game and got overlooked? The games can swing wildly based on what dice get rolled when, and even with a good plan you’d need some prescience to get the necessary information to do well with some of them. This leads to a spot where you can tell halfway through the game whether or not it’s going to go your way, at times, which never feels great. Don’t get me wrong, there are plenty of places where you can intervene to make your situation less bad, but there’s not always a “good” decision, and that’s disappointing. Kingdomino’s base game feels like it allows for more interesting choices because you’re guaranteed that those choices eventually exist (assuming you’re playing with all the tiles; if not, you’re at least guaranteed that some interesting choices exist). With dice, there’s no guarantee. You may just end up falling victim to variance and the cold hand of an cruel and uncaring universe. The game might also not go well. Either way, it’s got enough going for it that I think it’s a fine adaptation of the base game, but I don’t think that it manages to distinguish itself sufficiently from its predecessor to justify me playing it rather than Kingdomino’s awesome two-player mode. Personally, I usually just end up doing that. If you hate tiles, though, or you love roll-and-write games the most, Kingdomino Duel might be exactly what you’re looking for! It just wasn’t quite that for me.