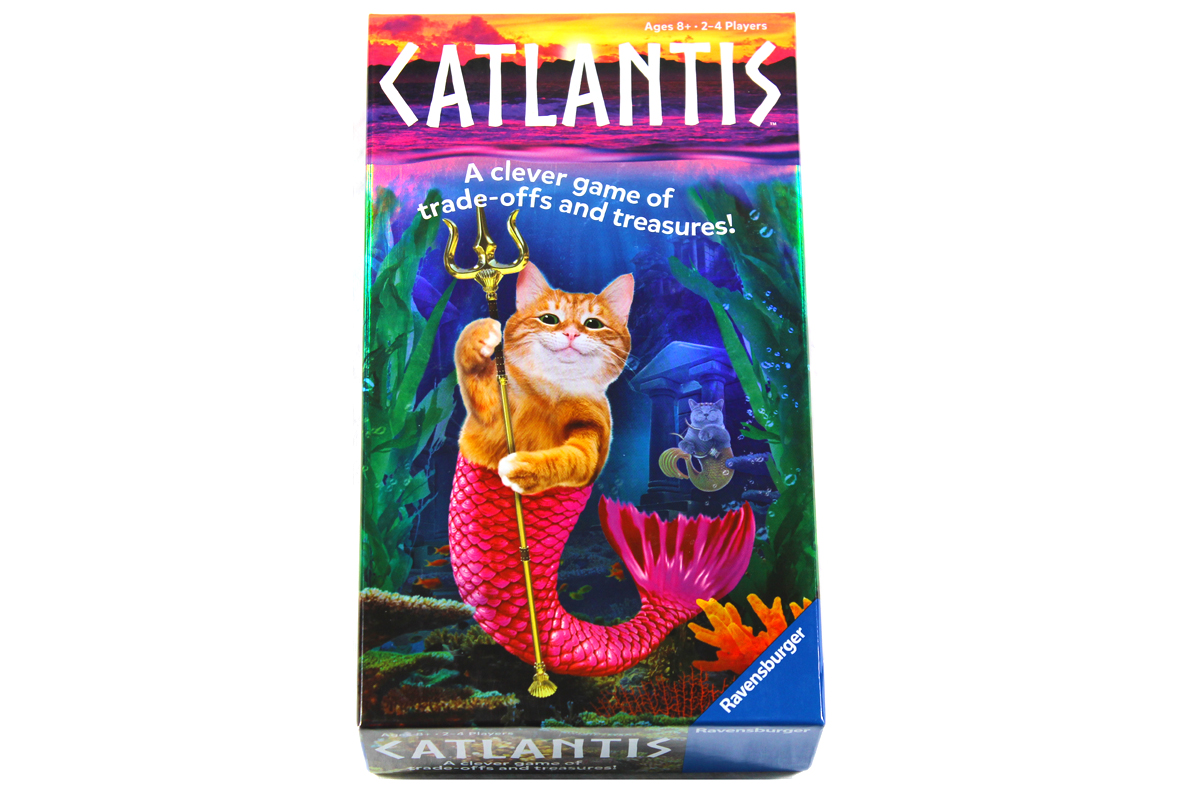 Full disclosure: A review copy of Catlantis was provided by Ravensburger.

Honestly, I’m not even sure where this one came from. I was in a mood the other night and felt like writing, so I just pumped out this review in about an hour or so. It was great! Really powered through it. Anyways, this is another one of the many, many Gen Con titles I got, the adorable Catlantis, from Ravensburger! They’ve been putting out a lot of titles this year, and have been especially busy with Villainous and their Universal series of games. Let’s dive right into Catlantis and see how it compares to the other games we’re covering this week.

In Catlantis, you represent one of the many mercat houses vying to be the leader of this (now sunken) empire. In order to win the favor of the other houses, you must make offerings of your treasure and influence to impress them with your generosity, but be careful; they’re doing the same to your house as well. Who among you will be able to unite the mercats and rule Catlantis?

Pretty much none. You’re going to shuffle the big deck of cards:

There are a few different types; more on that later. Give each player a Fur Order card: 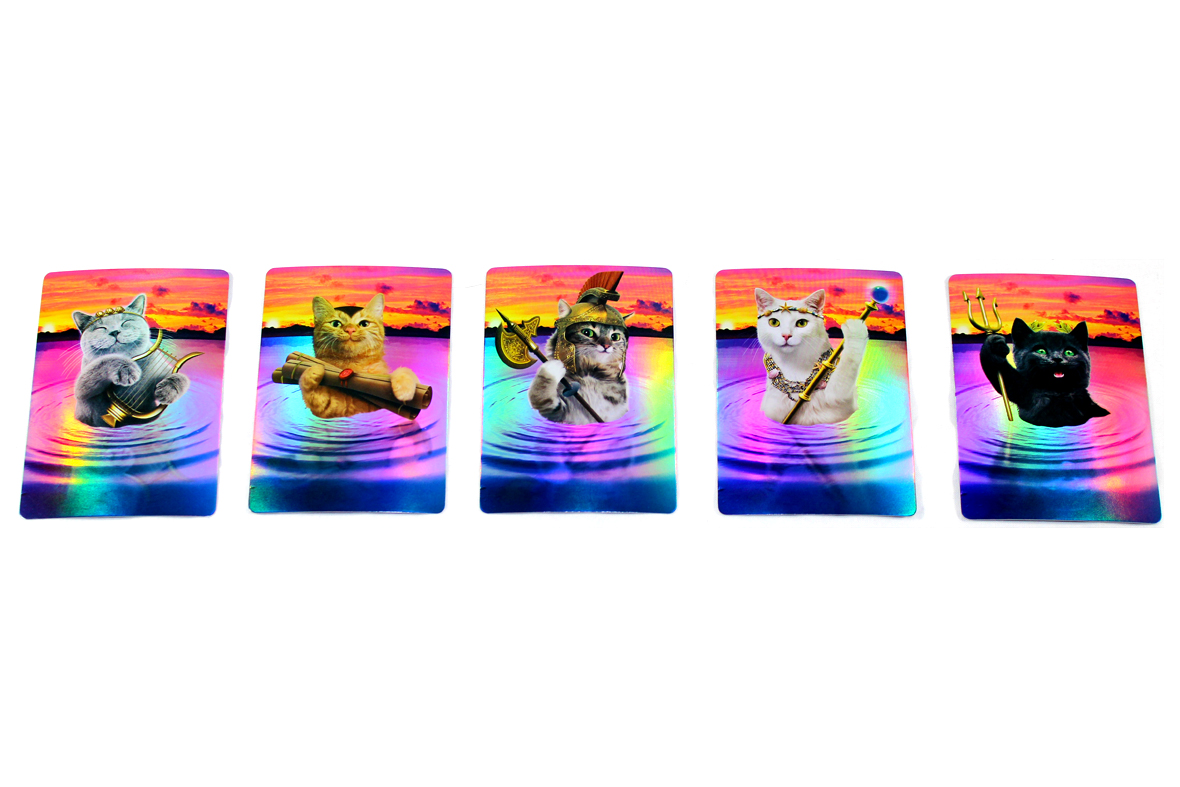 Keep those secret. Also give each player a Fin Type card: 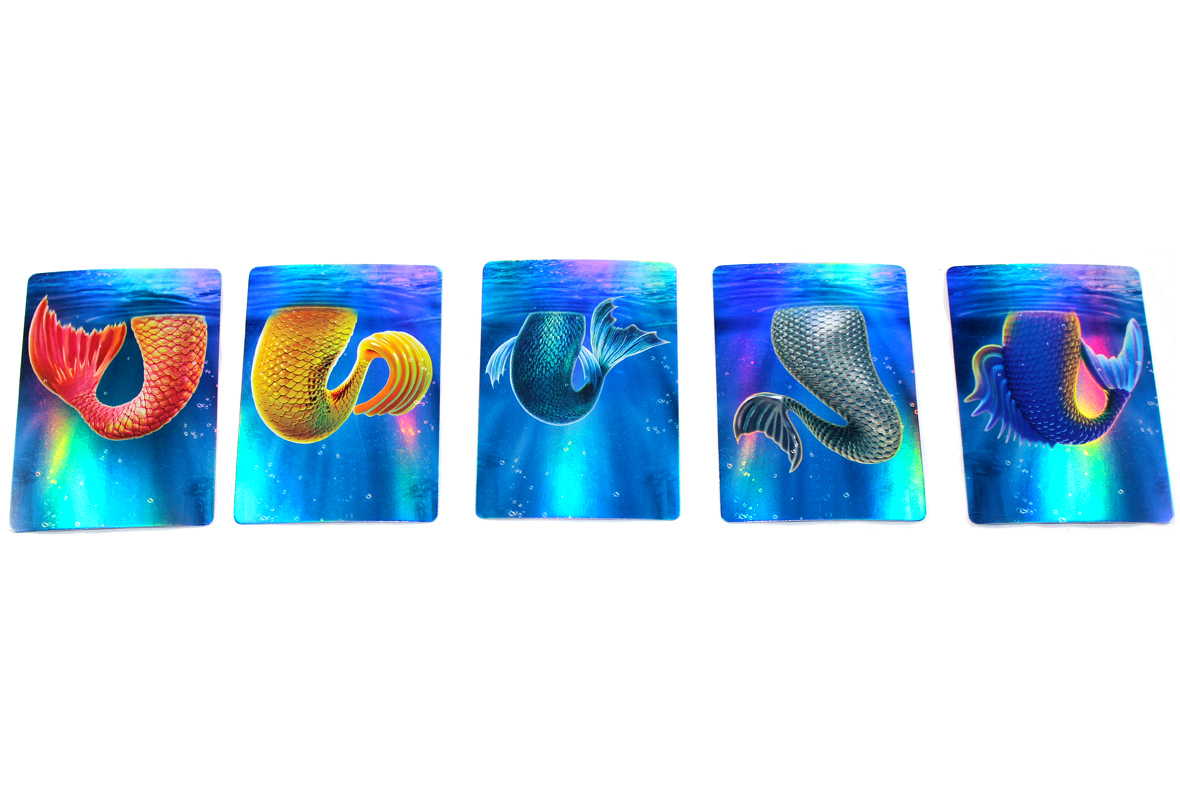 Keep those secret also. Assign each player a mercat meeple: 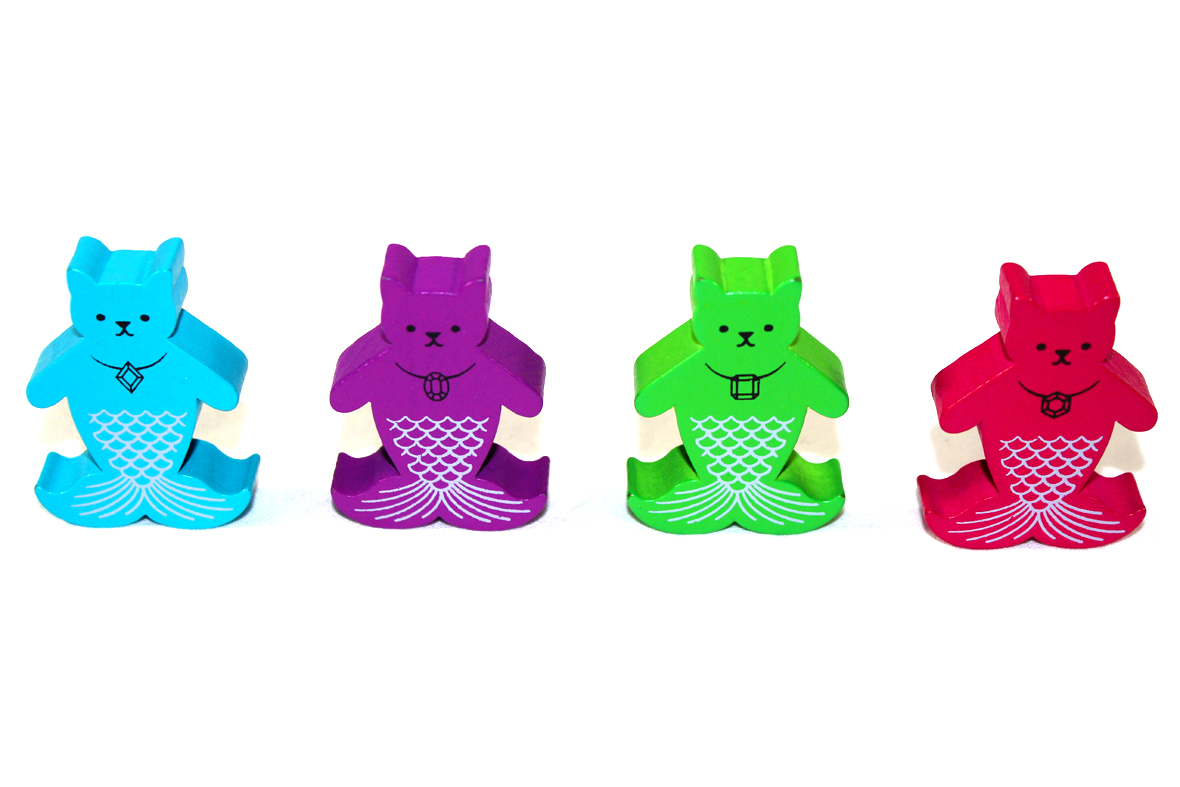 And give each player one Offering Stone in every other player’s color: 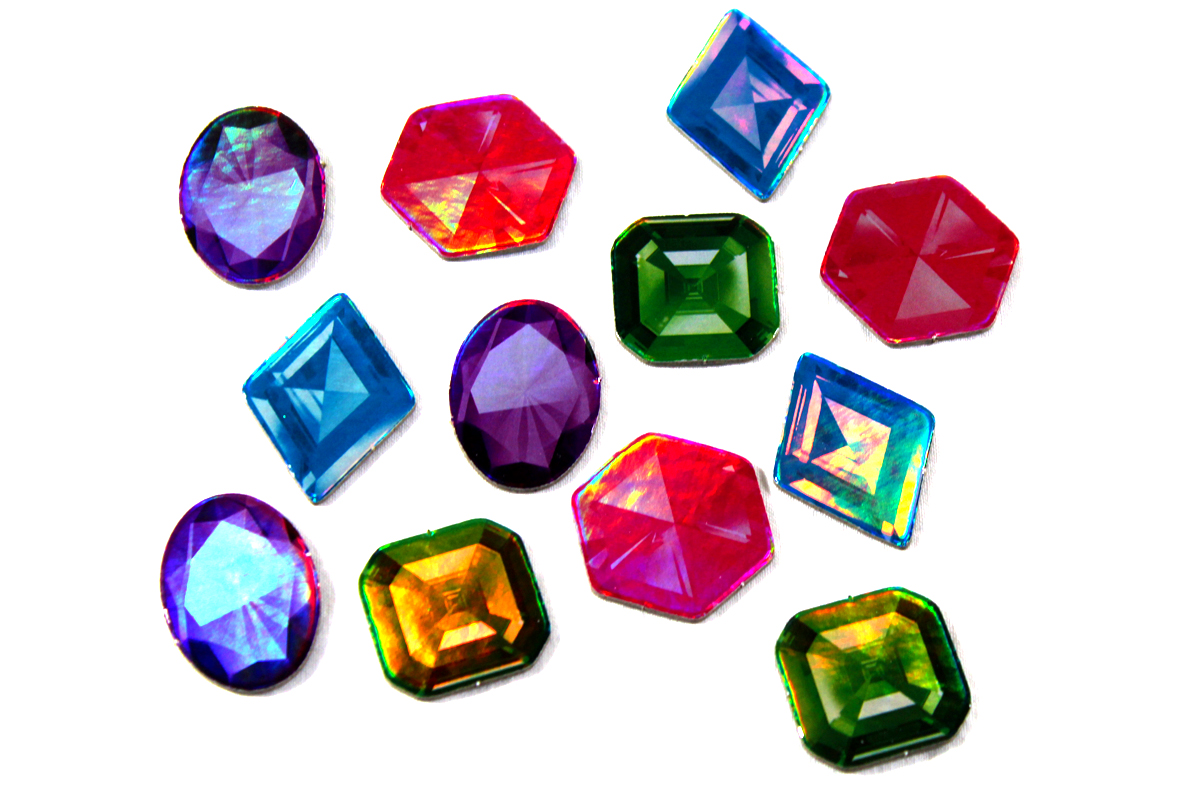 Once you’ve done that, flip four cards face-up into the center of the play area and choose a player to start! 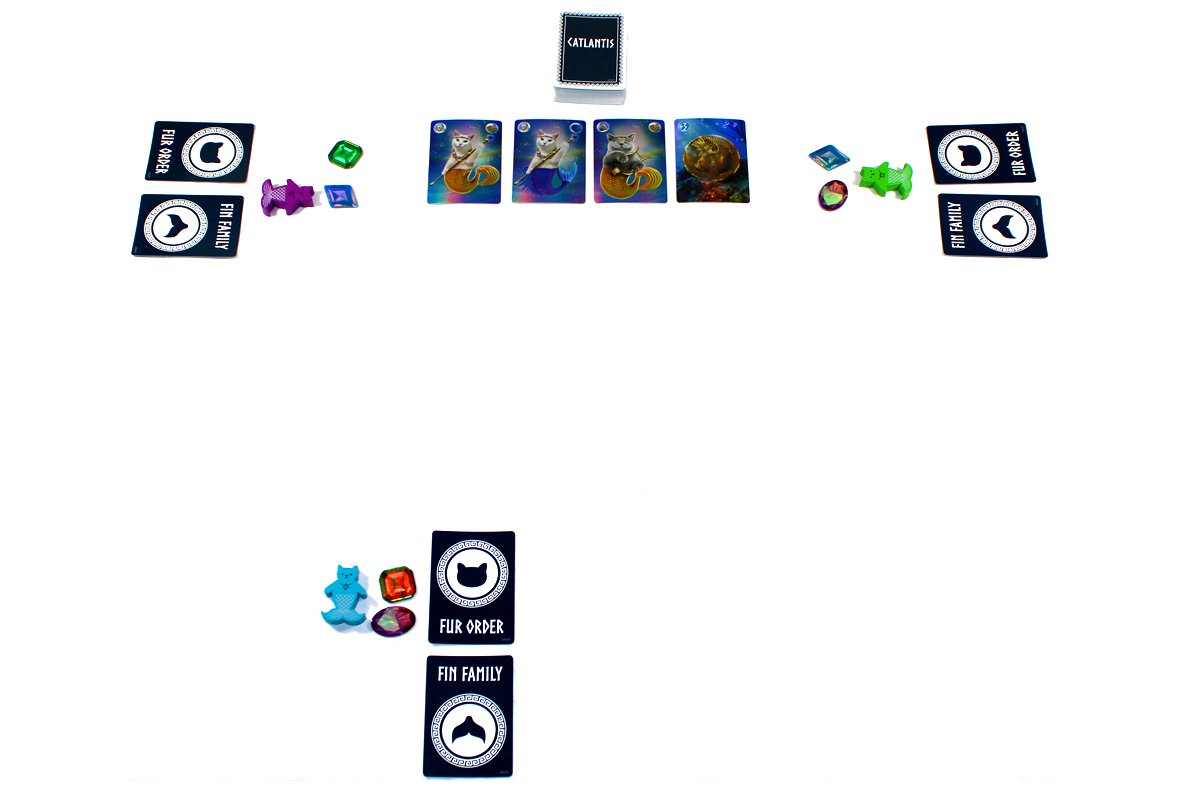 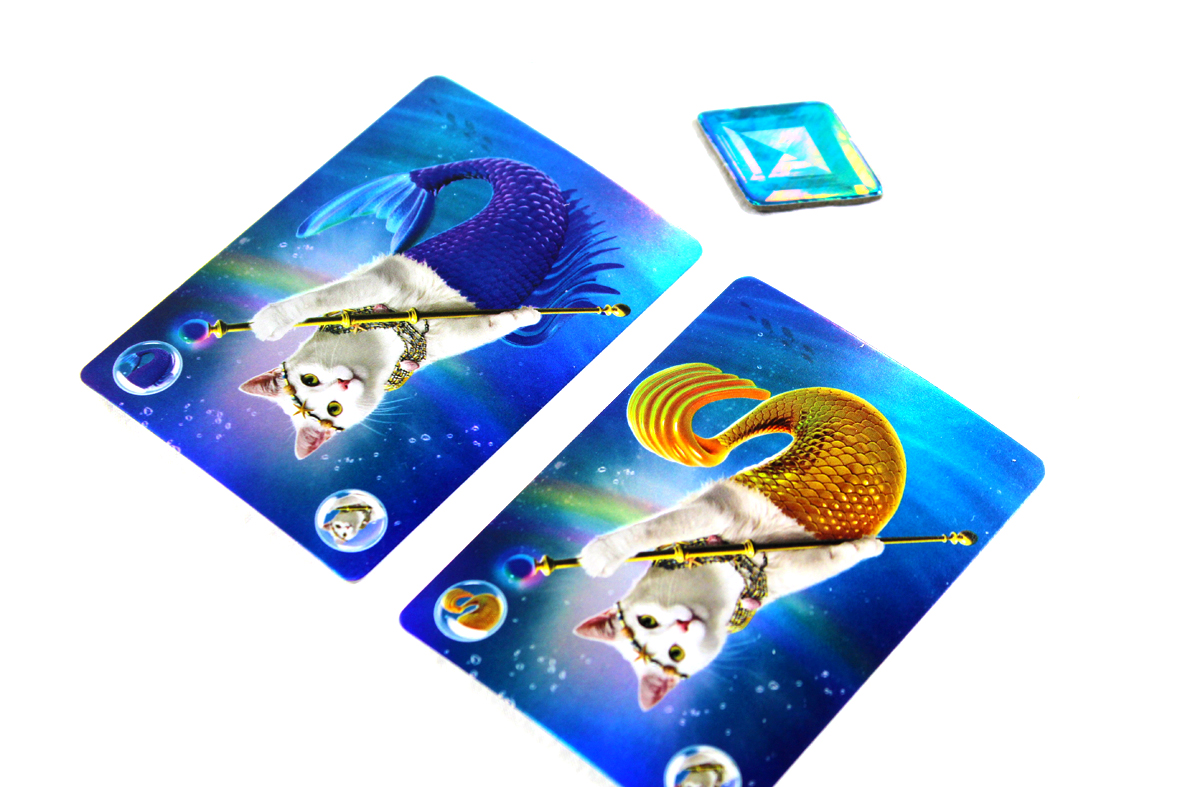 In Catlantis, you want to collect furs and fins matching your secret cards. Naturally, along the way, if you can get some Treasures and such, that would also be nice. Coins, too (I hear they’re using drachma, though ducats are still accepted), would be nice. Anyways, you can’t just take for yourself; that would be greedy! It’s a conundrum. 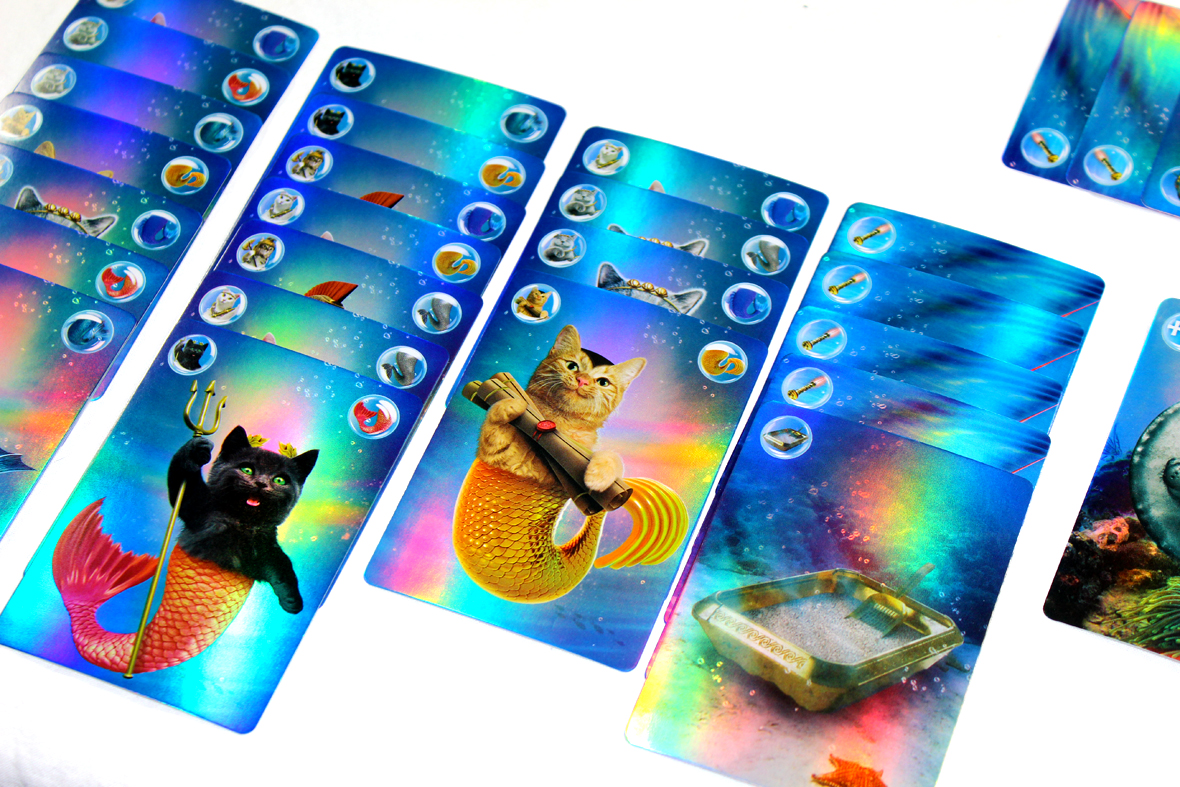 On your turn, you may flip over one of your Offering Stones to make an offer to another player. Choose any two face-up cards in the center and offer them to your opponent. They must choose one to keep, and you keep the other one! A purrfect compromise. This is pretty much the entire game. Once every player has turned over all of their Offering Stones, flip them all face-up.

Continue until the deck is out of cards, and that’s the end of the game. You then score as follows: 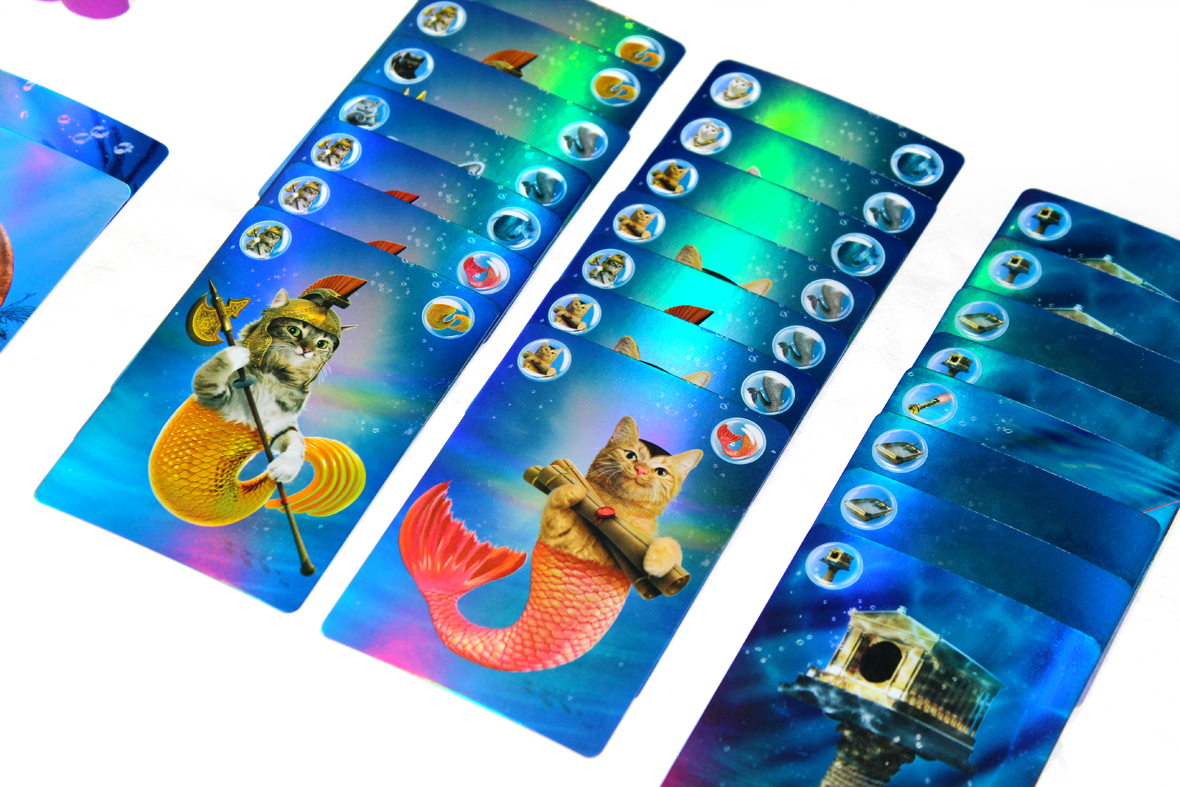 I think, for me, this game becomes the most interesting at lower player counts. At low player counts, you have a lot of control over the game’s outcome, since you get to take more turns. At higher player counts, I can’t necessarily stop another player from giving all my necessary cards to my opponent or taking all the cards I need, since I can only influence the game’s outcome on my turn or when I’m offered something. This makes the game feel a bit less deterministic, since any card that isn’t yours isn’t great for you to take. The difference between taking something of mine and something that isn’t mine and isn’t yours is pretty much trivial, as far as your score is concerned. Plus, once your opponent offers you something, there’s not much you can do beyond taking it or not. This means that more cards will be circulated out. Best case, they’re all cards you don’t want and so you have multiple opponents all offering you useful cards. Worst case, it’s possible for you to have very little ability to even get the cards you need, because your opponents offer them to each other or take them when you offer them. It’s not the most satisfying outcome, and that’s part of why I tend to prefer the game at two players. I just prefer more control.

Overall, Catlantis is fine, I think. Where it earns major points from me is that it’s reasonably easy to play and the art and theme are particularly excellent. It’s a super weird theme, yes, especially with the almost-terrifyingly realistic art, but hey, someone’s gotta get themselves out there and get a bit strange. I kind of wish more games just … went for it, thematically, to be honest. It’s much more refreshing to see a collectible mercat game than another fantasy game where Everyone’s White For Some Reason. Anyways, I’m getting off track. That’s what I think it does well; it packages the I-cut-you-choose genre with a delightful theme and a friendly-enough conceit that it truly is a game almost anyone could play. Very little language requirement, I presume different enough cats and tails that it’s decently accessible, and a cat-chy theme that will draw people in. And that’s good! Where it kind of lets me down is that it doesn’t feel like I can particularly influence the game’s outcome at any time, which would be fine if the game were short (I occasionally feel this way about Tussie Mussie), but it tends to last a surprisingly long time due to just the sheer number of cards. To that end, I’d usually just prefer to play Tussie Mussie, or if I want a long I-cut-you-choose game I’d probably turn to Trial of the Temples, if I’m just limiting myself to games that came out this year. That said, huge cat fans will almost certainly want to check out this game if for no other reason than the cards; they’re literally adorable. For other folks, it may be hit or miss, unless you’re a huge fan of the theme (and I am, to be clear).