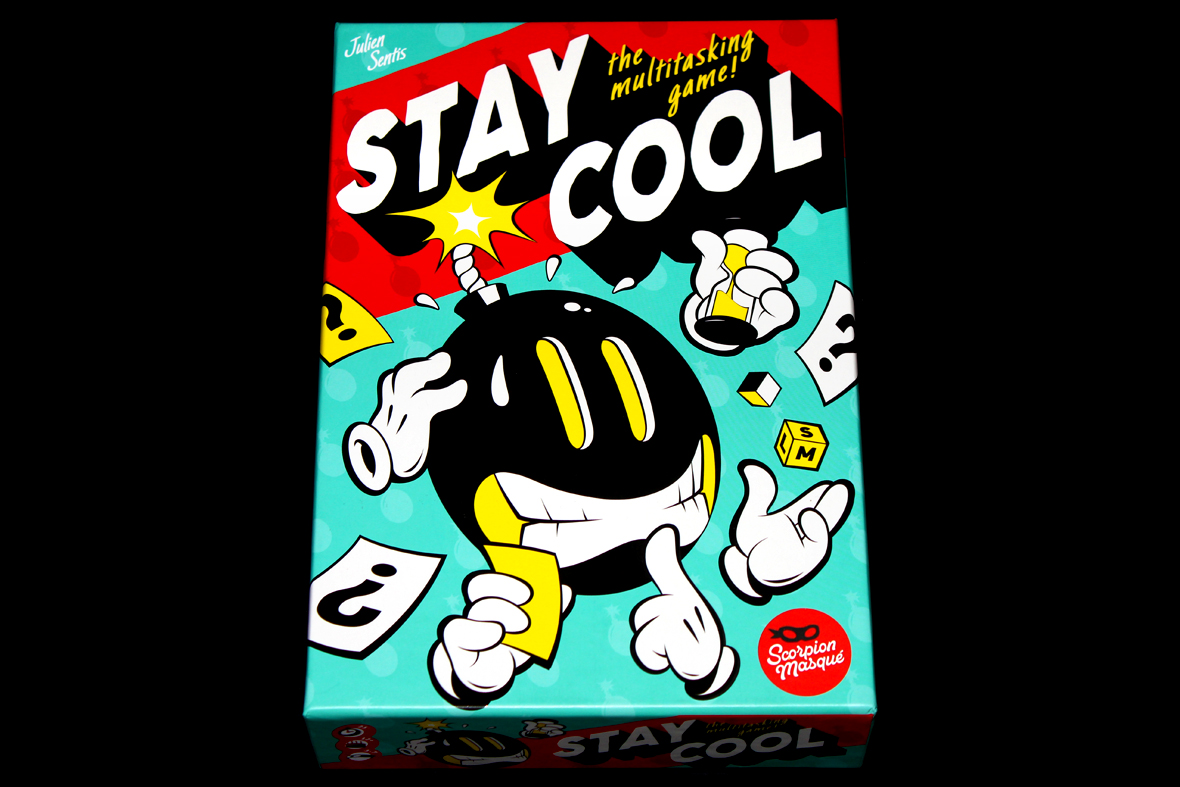 Full disclosure: A review copy of Stay Cool was provided by Scorpion Masqué.

I skipped ahead for no reason and decided to bust out this review a bit early. I do that sometimes; I’m my own worst enemy when it comes to scheduling, editing, and basically every other “-ing” that matters for consistency when running a site. It’s … definitely something. Either way, that’s not really relevant to y’all since I’m still releasing this review on the launch day I planned like, a month and a half ago. Hooray, scheduling! Let’s talk about Stay Cool, though! It’s the latest from Scorpion Masqué, publishers of the fantastic Decrypto (among other titles). Will this game become the party game to beat, this year?

In Stay Cool, you have a simple goal. Answer some questions. Sure, there’s a timer, but there’s nothing to worry about, right? The questions are straightforward, you know what you’re getting into, you have to answer some with dice, normal stuff. Except for that last thing. Wait, two people are asking you questions simultaneously? And you have to balance that? Well, thankfully that’s all there is. Though you probably forgot about the timer, right? You’re about to be under a lot of pressure; will you be able to rise to the challenge? Or will you crack?

Pretty much none. Have the players sit in a circle, and choose a player to go first. That player gets the dice:

The player to their right gets the Blue (Verbal) Question Cards:

The player to that player’s right gets the Red (Written) Question Cards: 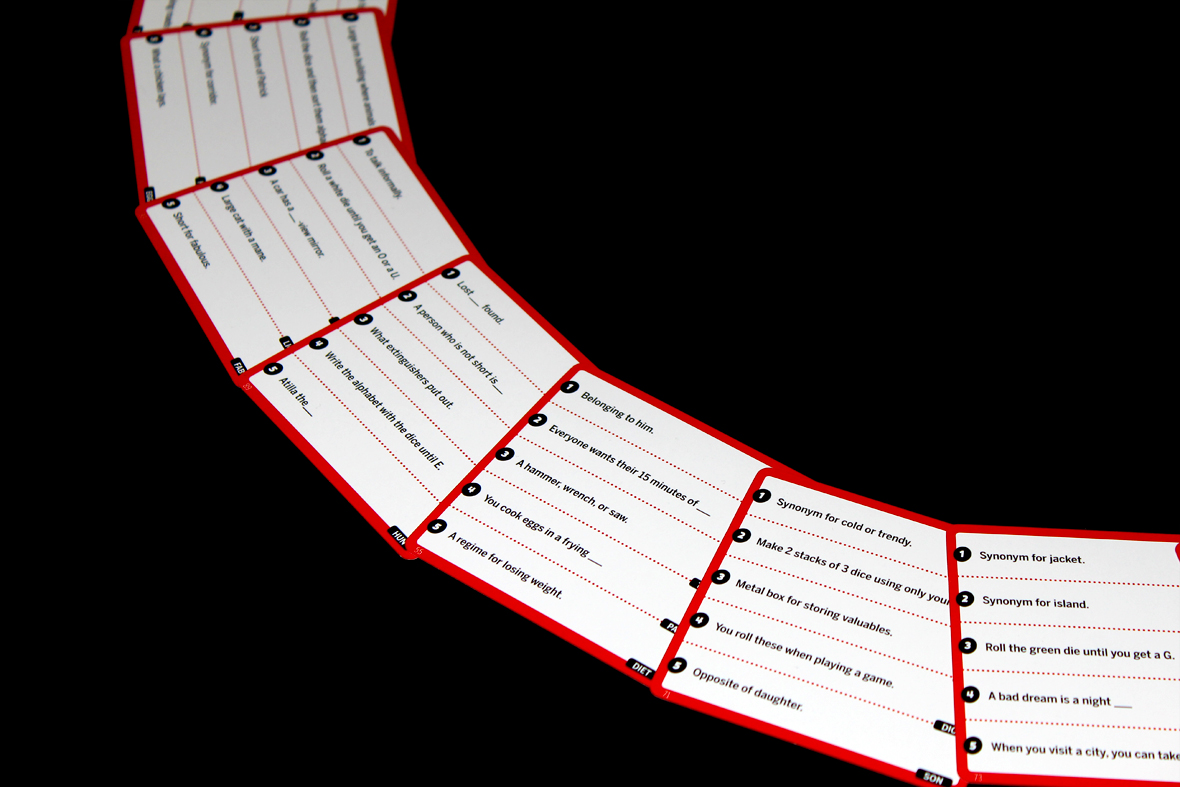 And the player to that player’s right (or the Blue Question Card player, if playing with only 3) gets the sand timer and the sand timer card. You may need the box lid; keep that nearby, but you’re ready to start! 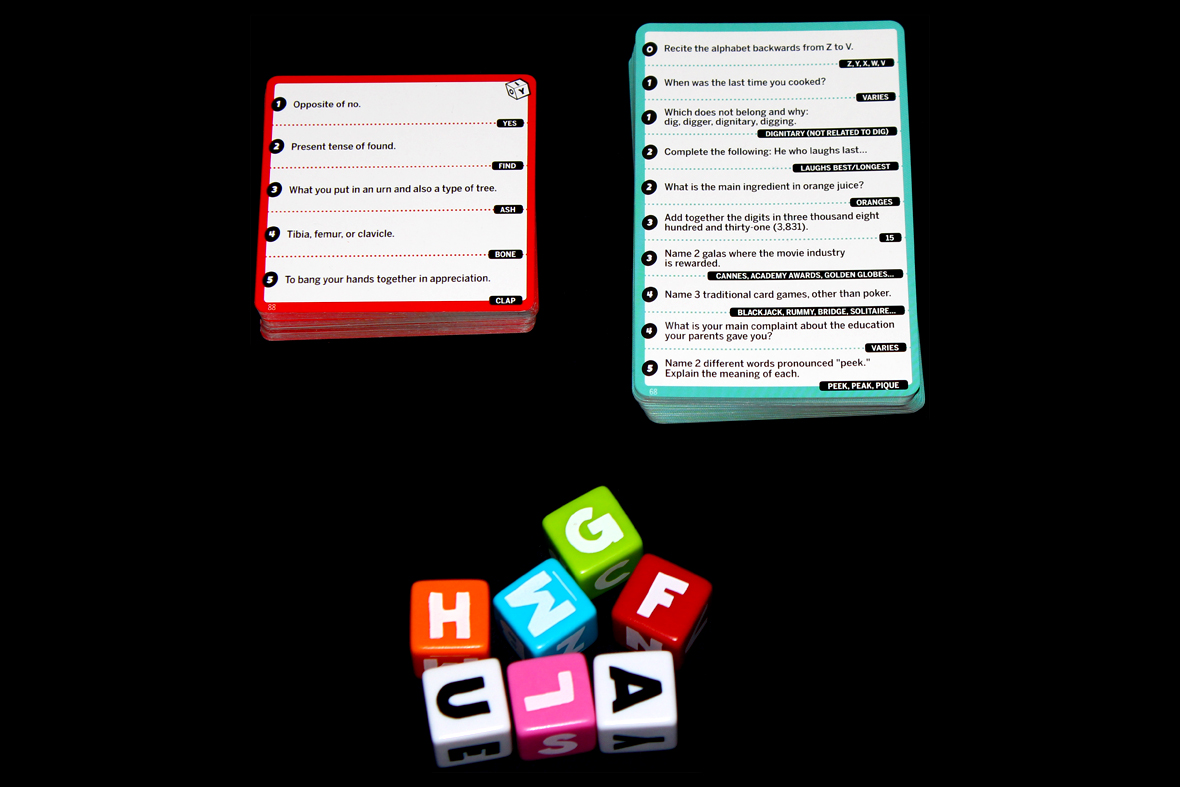 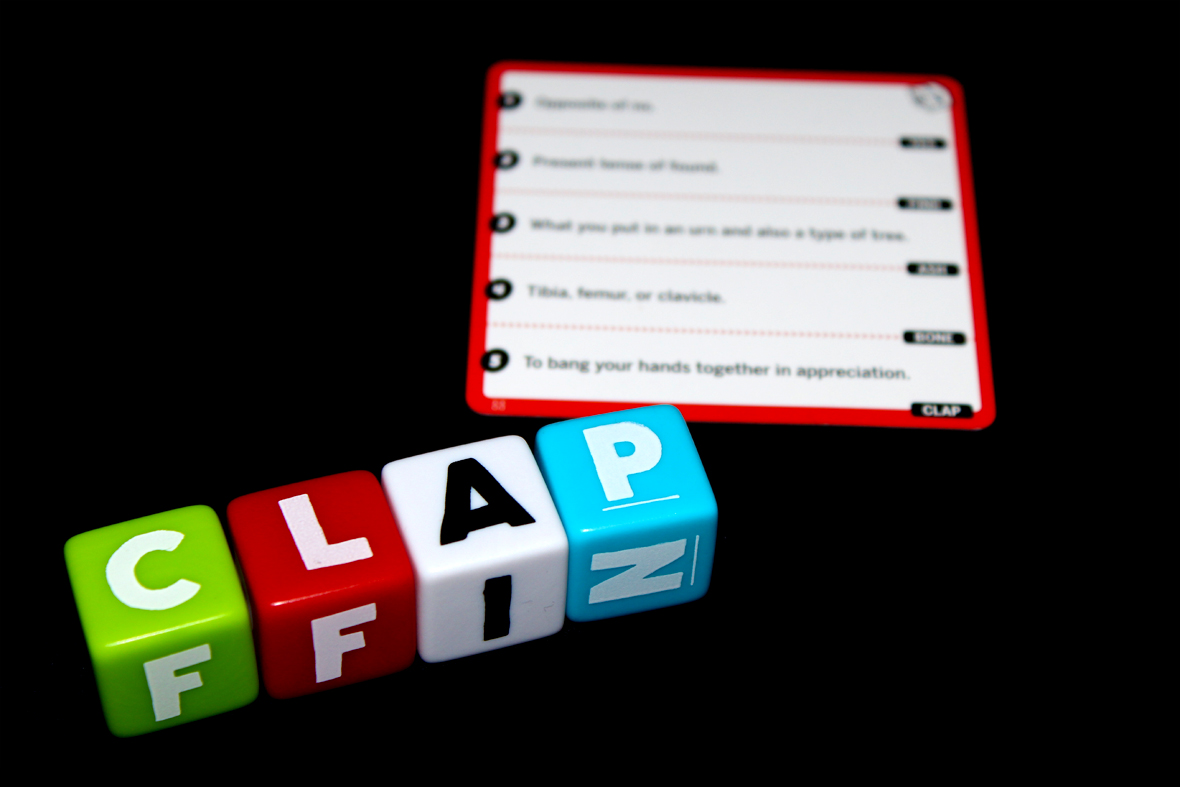 The game is played over three rounds. As the game itself claims, it’s dead simple. You just answer some questions while being timed. The Blue questions are always answered verbally, and the Red questions usually involve the dice or some manual dexterity element. Blue asks first, then Red. You may answer either question in any order you choose, and questions are asked from top to bottom. Few caveats:

Well, you have to consider the timer. You have two minutes. Every 30 seconds, the Timekeeper will flip the timer onto the next number. If they forget, that’s their bad, not yours! When time runs out on the 4, you’re done. Once that happens, score! Check the number next to the bottom-most question you got right on each card. Multiply those numbers (4 x 3 = 12, for instance), and that’s your score for the round.

Play continues until every player has taken a turn answering questions, and then you move on to Round 2! Round 2 is much the same as Round 1, but this time, the player answering questions must keep track of their time and flip the timer as needed. The Timekeeper’s job is now to make sure the timer doesn’t run out. If it runs out at any point, they may call time, and that player’s turn ends prematurely. Be careful! 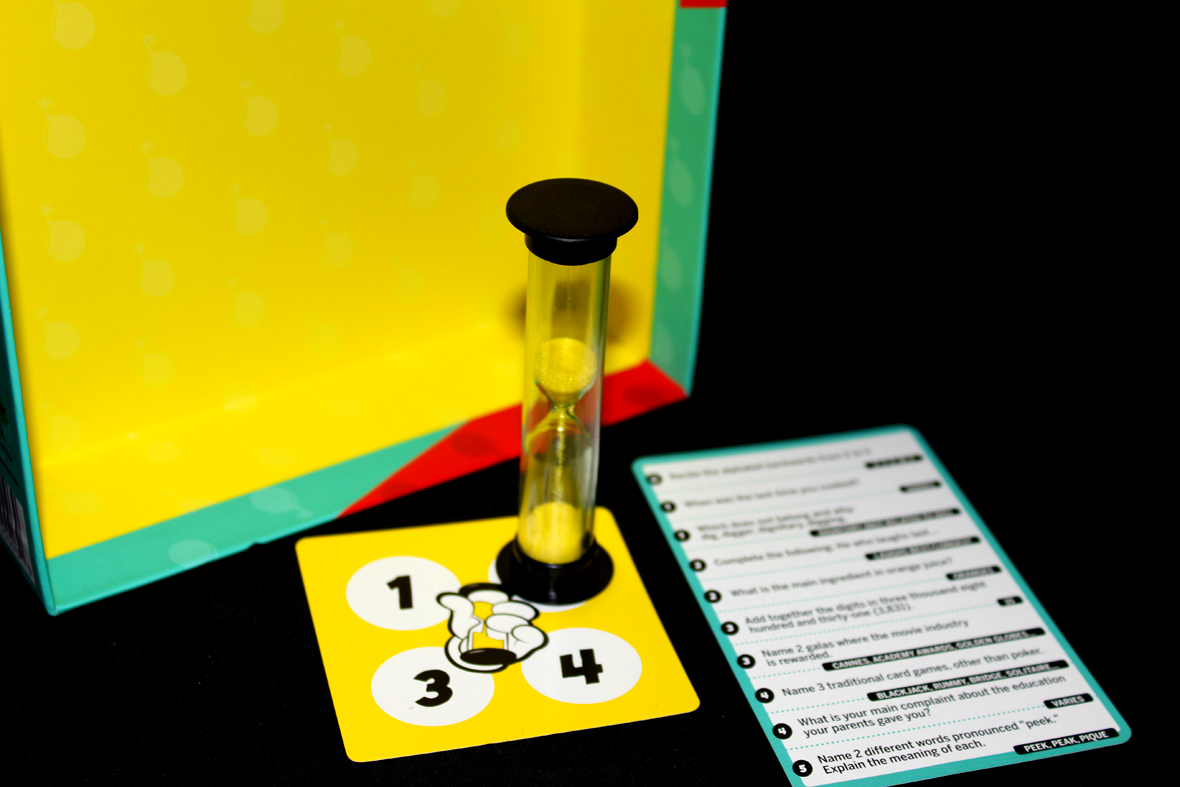 If that were as bad as it got, you’d probably be okay. But Round 3 is the most challenging of all! Players no longer keep track of their own time; the Timekeeper gets it back. But now, the Timekeeper keeps the timer obscured, so that the player can’t see it. At any point, the player may say, “Flip!” to flip the timer over onto the next number. Like Round 2, if the timer runs out, though, their turn is over!

Add your score from all three rounds, and the player with the most points wins!

So this is a game that has basically zero differences in gameplay as player counts increase; the game just takes progressively longer because each round has more turns with more players. The game itself doesn’t play differently, though. I may recommend the game at 3 – 4, since that means there’s no downtime for players where they’re not doing something, but honestly, it can be kind of nice after a stressful round to get a break of some kind. Up to you. I just like always kind of being in the experience of playing the game, and at 5+ you’re going to have a few rounds where you’re just watching. Thankfully, watching someone else have a Very Stressful Time is still pretty funny, so it works out. That said, still preferred at 3 – 4 players.

Overall, I think Stay Cool is a blast! I just … really enjoy it. Do I want to play it all the time? No. It’s stressful. But I usually have a good sense of the right groups for it, and whenever we play it, I have a blast. The other players? Who knows; I’m not as concerned about them. I kid; they’re usually laughing at the end of the round. I wouldn’t recommend this game for your extremely anxious friends, but if your friends are fine with some self-inflicted, low-stakes, and ephemeral stress, this will definitely cause that. And it’s fun! It’s a smart little game, in that way. It relies very heavily on the good science that people can’t multitask well, and gradually builds up and then devastates your confidence. That’s my favorite part about multitasking research (yes, I have a “favorite part” of media multitasking research, thank you): everyone thinks they’re much better at multitasking than they are. This game’s a really good way to learn that cruel truth. I wouldn’t call it a puzzle game in the same way that Anomia really isn’t a puzzle game; they’re party games through and through. They’re just party games that will cause you some mild consternation because they’re hard. And that’s good! I had a blast learning this at PAXU and instantly thought of a friend I wanted to teach this to. And I think that’s what’s nice about Stay Cool; it makes you think of a person you want to play it with. You want to see how they’ll be able to do! I haven’t had many gaming experiences that have been that specific, but I found it really valuable. And if you like party games, multitasking challenges, or taking a couple years off your life due to stress, you may like Stay Cool, as well!