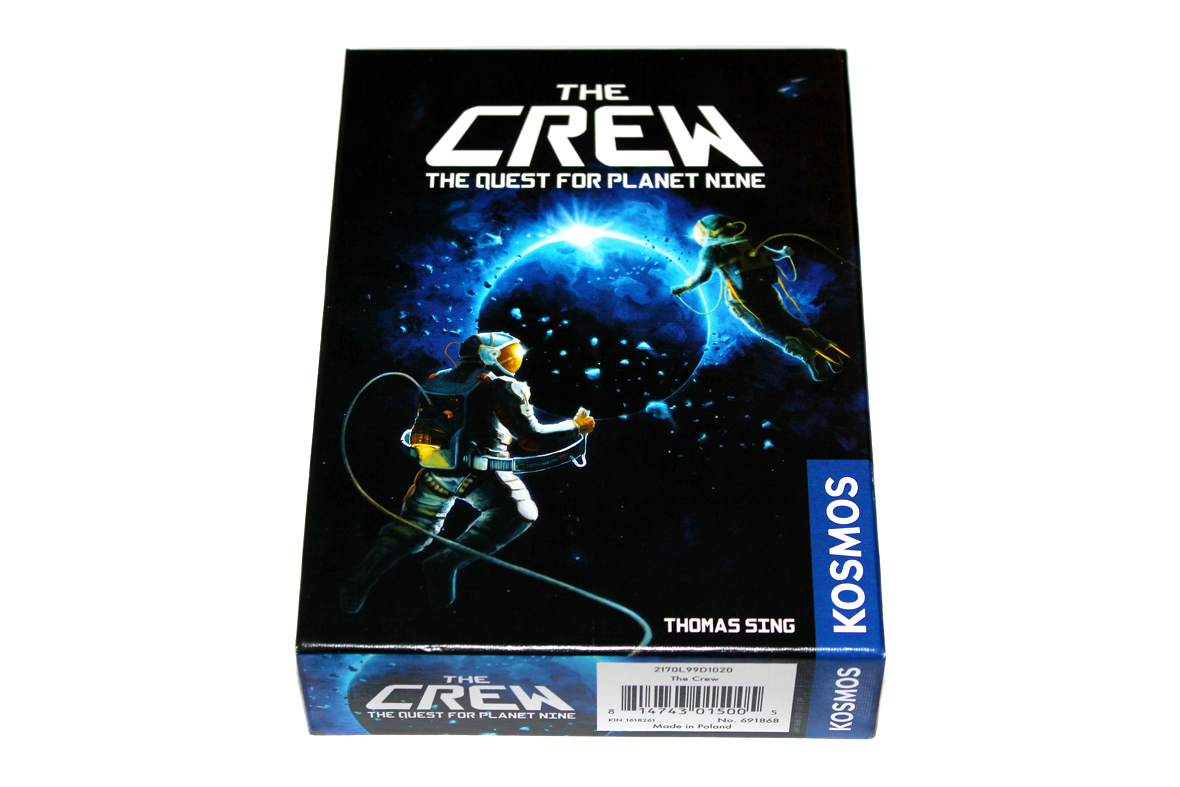 Full disclosure: A review copy of The Crew was provided by KOSMOS.

So, I wrote this in a hurry, but … I mean, I’ve been waiting for this game for months and it formally releases next week. I wasn’t going to just sit on my hands and do nothing. And so here I am, moving around my release schedule with the limited number of reviews I have left. I may move down to like, two a week or one a week if I start struggling so that I can still have a consistent stream of content. Being real, a lot’s happening right now, so, I’m not saying this because I want you to go help me out, but if you have a favorite content creator, a lot of folks are struggling due to con cancellations, theater shows stopping, and a generally large amount of enforced isolation. Reach out to them, show your support, etc; a few people have done that for me already and it really means a lot. Somber business aside, let’s talk about The Crew. It’s the latest game from KOSMOS, who also publishes the EXIT games I love so much, so, there’s always something exciting to talk about from their part of town, and I love it. Let’s dive right in and see what’s going on with this one.

In The Crew: The Quest for Planet Nine, you play an intrepid explorer who seeks to discover something far beyond the stars; a large exoplanet rumored to exist at the boundary of the solar system. You can’t do this alone, though. You’ll need all the help you can get, and you’ve got some of the best astronauts that you can find on your team. Space is going to throw everything it has at you, and even its best tricks can’t phase you if you’re going to really take this adventure to the next level. Be careful, though; not every mission is going to be a cakewalk (some will be a spacewalk). Will you be able to discover this mythical planet? Or will you just end up lost in space?

Not much to do. Shuffle the large cards:

Deal them out as evenly as possible; at three players one player will have one more card than other players. There’s a deck of smaller cards, as well; you’ll want to shuffle those, too:

Those will be relevant to the various Missions you’re going to go on. There are also a variety of tokens: 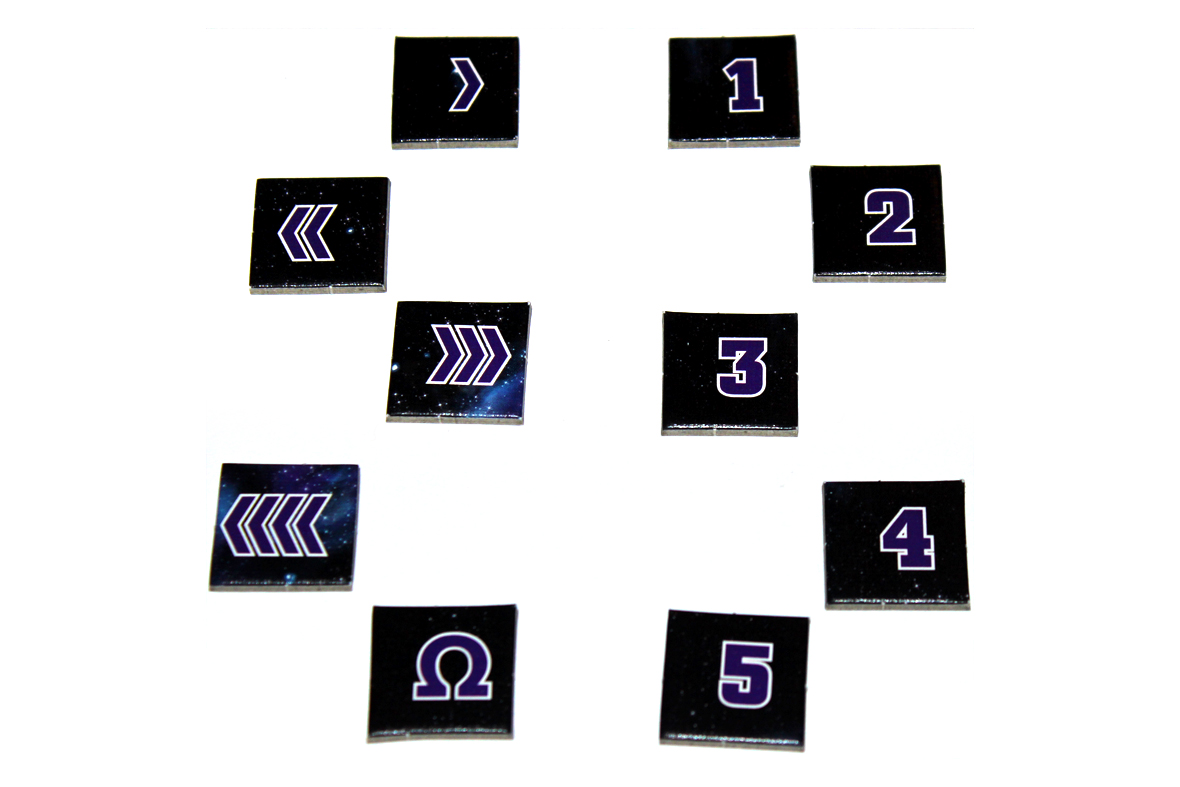 You might need some of those. Give each player a Moon card as a reminder; set that in front of you:

Give each player a Comm Token, as well, green side up: 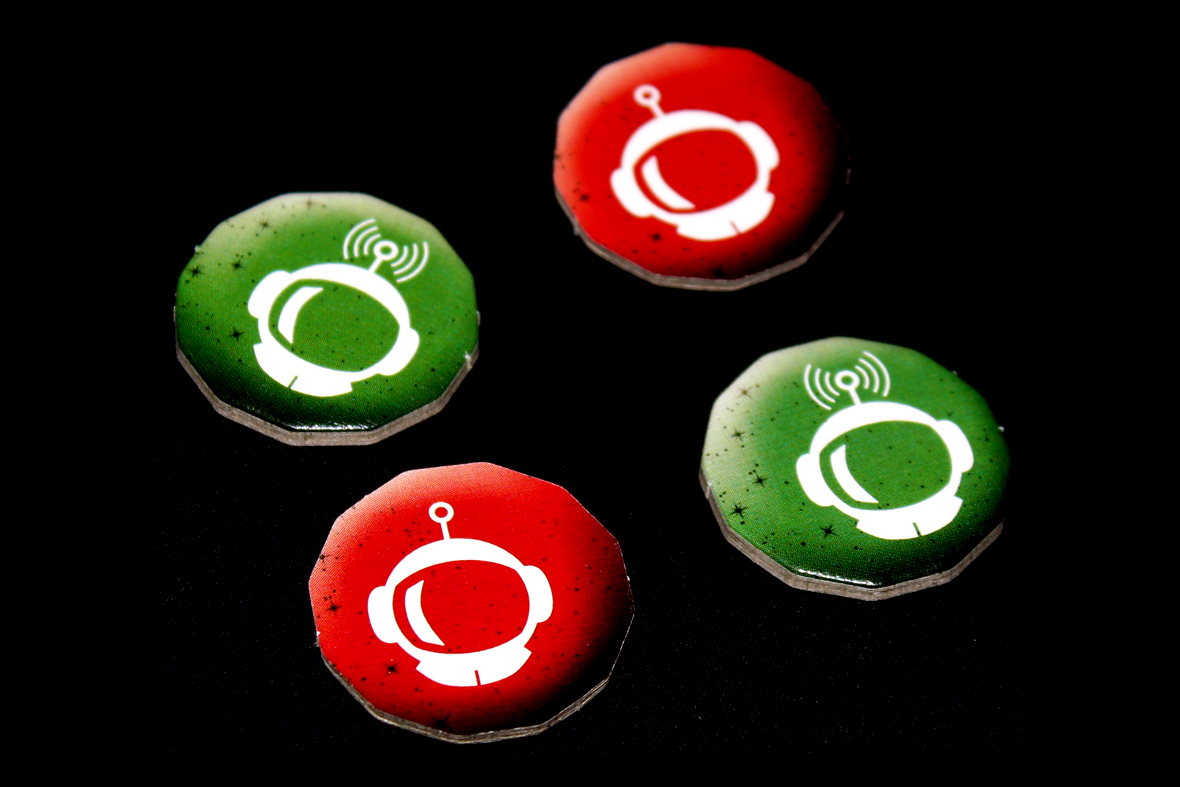 You’re basically ready to start! For this review, I’ll be showing the first Mission, which just involves completing one task card. Let’s dive in! 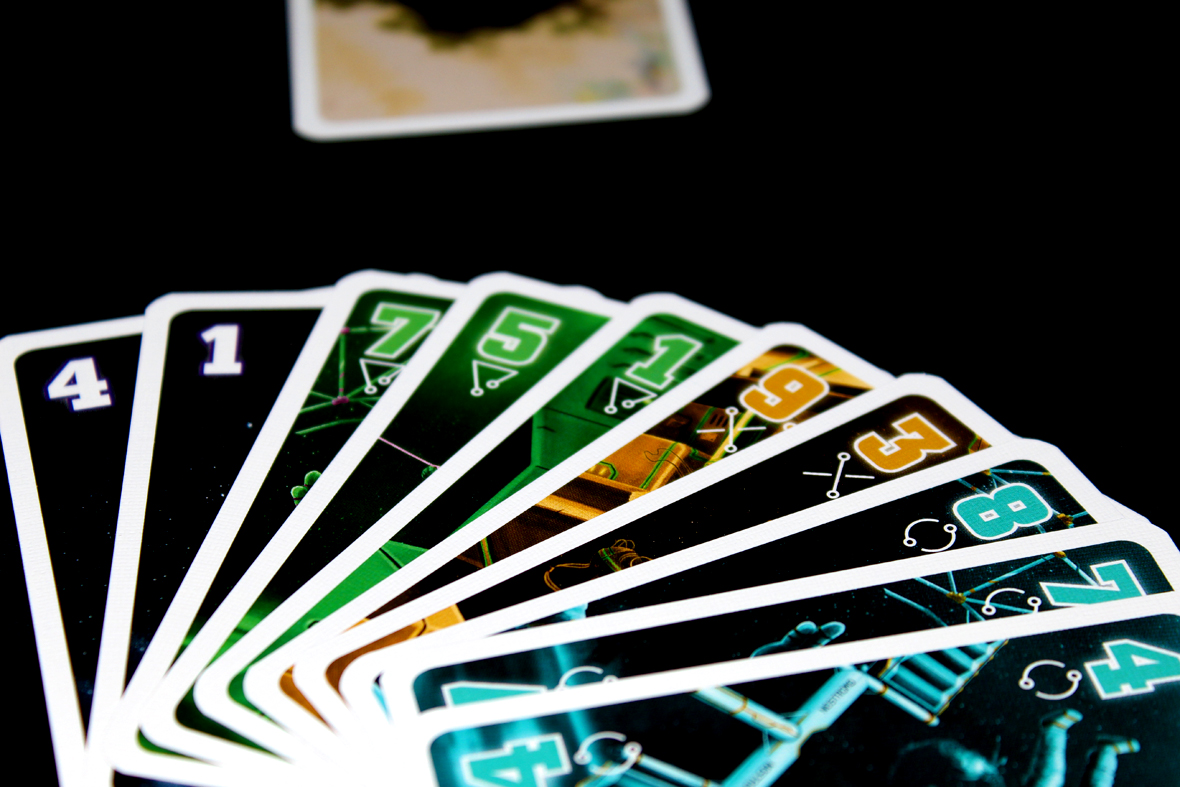 At its core, The Crew is a cooperative trick-taking game.

If you’ve never played a trick-taking game, essentially, it’s played over a series of rounds, called “tricks”. In each trick, a player will play just one card. The first player to play is chosen by a variety of criteria, but they are the “lead” for the trick, and the suit of the card they play is called the “led suit”. If you have that suit in your hand, you must play a card of that suit; that’s known as “following suit”. If you do not have a card of that suit in your hand, you can play whatever card you want. I typically call that “throwing off”; I’m not sure if that’s a standard term. In The Crew, there are four cards of a special suit, called Rockets:

If a Rocket is played in a suit, the highest Rocket played wins the trick, but a Rocket can only be played if a Rocket was led or if the player has no cards of the led suit. Otherwise, the highest card played of the led suit wins the trick. When a trick is won, the player who played the winning card takes the cards played and leads the next trick. In The Crew, only the most-recently played trick may be viewed; the other tricks are kept face-down.

In each Mission (a full hand of cards), you’ll have tasks. Some of these tasks are “take a trick containing the specified card”. Others are “the designated player may not take any tricks” or “at least one trick must be taken with a 1” or something similar. The nice thing about The Crew is that as soon as all Missions are completed or any Mission fails, the game immediately ends.

Play until you’ve completed or failed your Mission, and then go again! There are 50 Missions in total; can you complete them all?

The game changes a surprising amount as player counts shift. At two, you have to play a variant that involves JARVIS, an AI player, showing half of their hand until you play cards and reveal the other ones. It’s … well, they noted on the box it plays 3 – 5. Take what you will from that. Having tried it, I feel like it’s a bit more of a puzzle game than a cooperative game, at that point, but it can be frustrating if the cards you need are buried under JARVIS’s hand. At the standard player counts, the game changes a lot, since the cards are more distributed at higher player counts. At 5, it’s a very challenging game. So much so, in fact, that after Mission 24 you can start passing a card at the start of the round to help your co-players. That’s saying something. 3 is probably the easiest player count since players have so many cards; it’s unlikely that they’re going to be strong-armed into playing something that they really don’t want to play unless it’s nearing the end of the mission. Be mindful of that, though; it’s still very possible to lose at three. As a result, though, I generally prefer playing at four. It’s a nice balance of challenge and player count. Three is also totally fine, though! 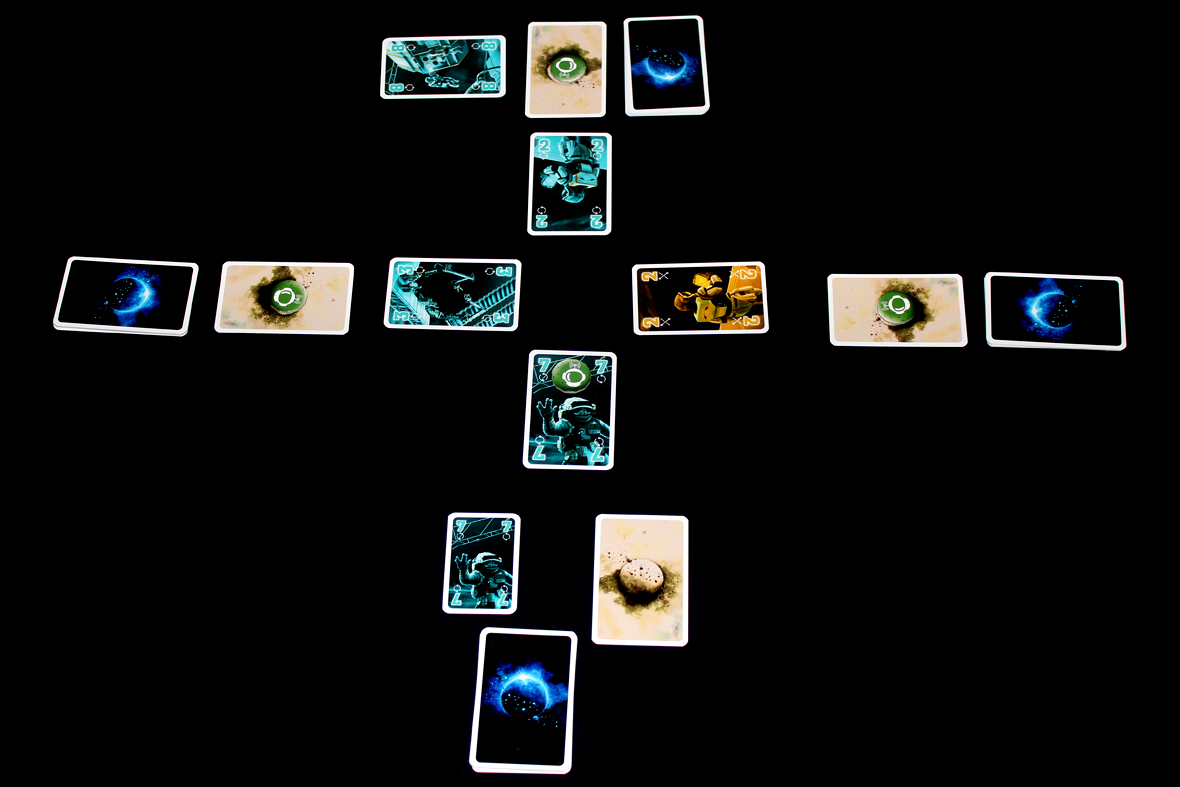 It kind of speaks for itself. I think The Crew: The Quest for Planet Nine is, bar none, the best trick-taking game I’ve ever played. It’s likely one of the best cooperative games I’ve ever played, as well. There’s always room to improve, but, I mean, I’ve gotta give credit where credit is due. This game consistently blows me away. It’s been top of my mind for months as I’ve been trying to get a copy. I almost made my own, but I’m powerfully lazy. It’s quick, simple, and extremely difficult to put down. I had to end a session I played with my housemates because one was nodding off mid-game but still wanted to keep playing. You don’t get that kind of energy in board games, usually. There’s some interesting musings about giving a “10” rating, since I’ve only given it twice before: Millennium Blades, my favorite game, and Carcassonne: Inns & Cathedrals, an expansion that I believe to be perfect. I think that a 10 means that, to me, a game is unbelievably good. Flawless? Of course not; every game can improve. The best game in every genre it sits in? Probably not; I mean, thematically, I do love space games, but I think there are cooperative games with themes I like more, like Spirit Island. But the places where it shines are extremely bright spots, and I think that they cement The Crew as the game I’m going to recommend all year. It’s truly an excellent experience. Is every mission going to blow you away? No, the cards are randomized, so bad stuff can still happen. But it’s a fantastic little title and I don’t think I can recommend it enough. If you like trick-taking at all, if you’re looking for the next great cooperative game, or you just want a game that’s going to give you a little randomness, a little challenge, and a lot of mileage, I think The Crew: The Quest for Planet Nine is far and away one of the best games I’ve played in years. I’d overwhelmingly recommend checking it out! Hell, just ask me if you see me at a convention; I’ll likely have it with me and play it with you. I just, I think it’s just that good.