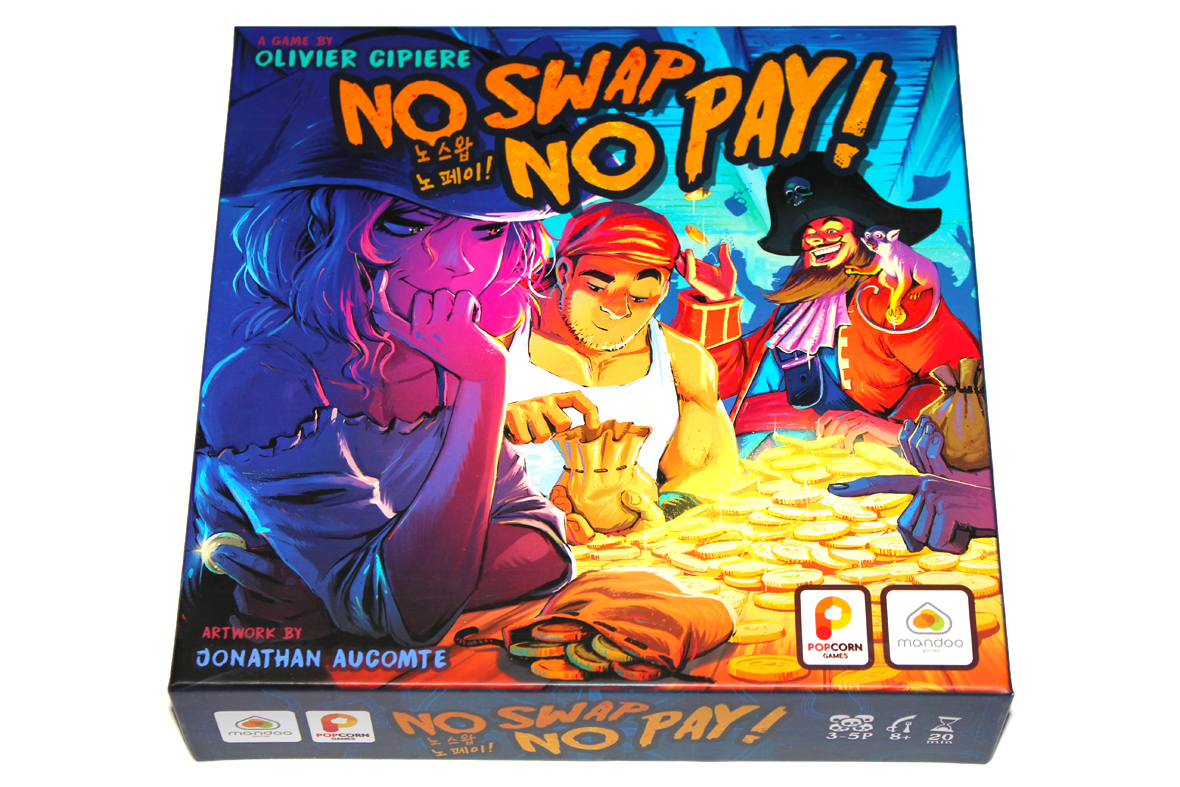 Full disclosure: A review copy of No Swap No Pay! was provided by Mandoo Games.

Another title from Mandoo Games! I still need to review Castello Methoni, now that I think about it. That was a strange one. Maybe I’ll do that one in a few weeks. We’ll see. Either way, Mandoo had an incredible 2019. Kushi Express and Queenz were both just, really solid titles. That wasn’t all they released, though, so that’s why we’re here, talking about No Swap No Pay! now. Let’s dig into this latest title!

In No Swap No Pay!, you play as pirates coming back with the latest haul. It’s time to share the treasure, but you figure you’ll make it a bit more interesting. Everyone knows what coins are available in this haul, and everyone starts with the same amount of treasure. You’ll take coins each round, but then you have to try and swap with other players. If you do this right, you’ll end up with far more treasure than if you had split it equally. The problem is, someone won’t. You’d prefer that someone not be you. You’ll have to keep an eye on the prize if you want to take all that gold home; will you end up with treasure? Or just plundered?

Give each player a Player Aid card with the pirate of their choice: 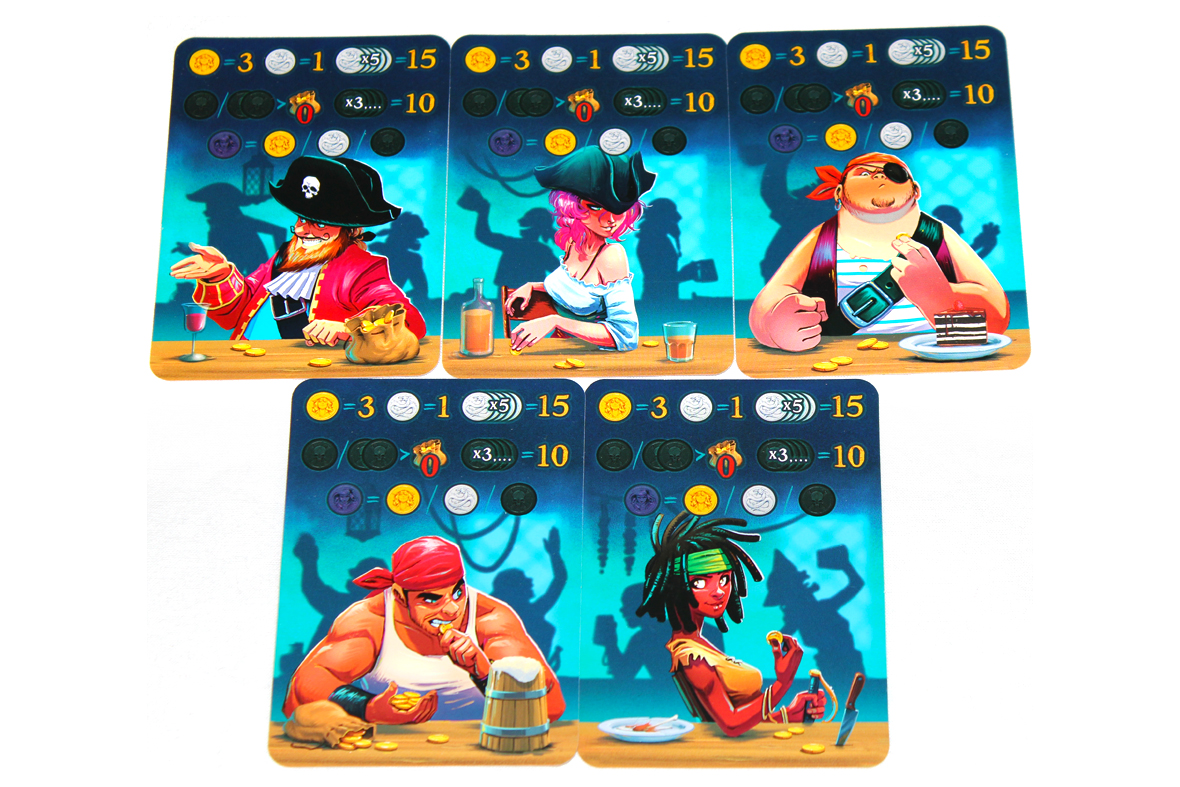 Now, give each player a bag: 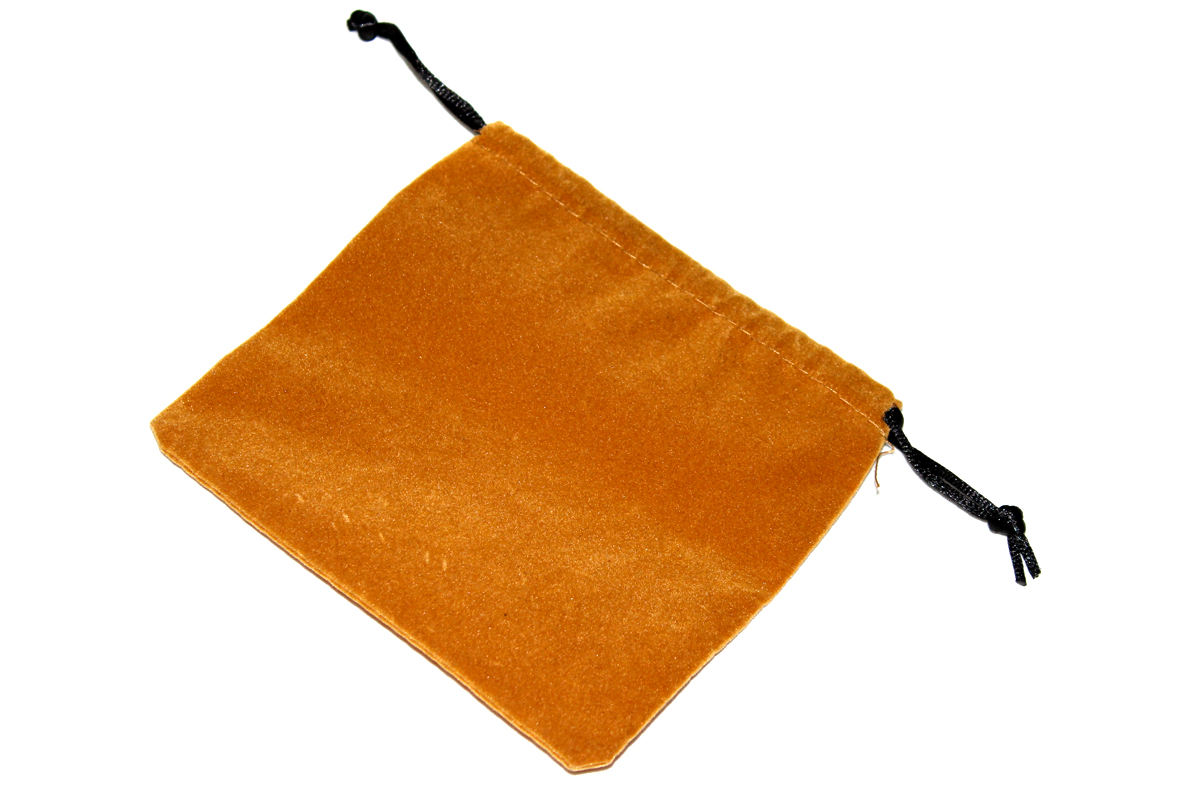 Also, set some coins aside: 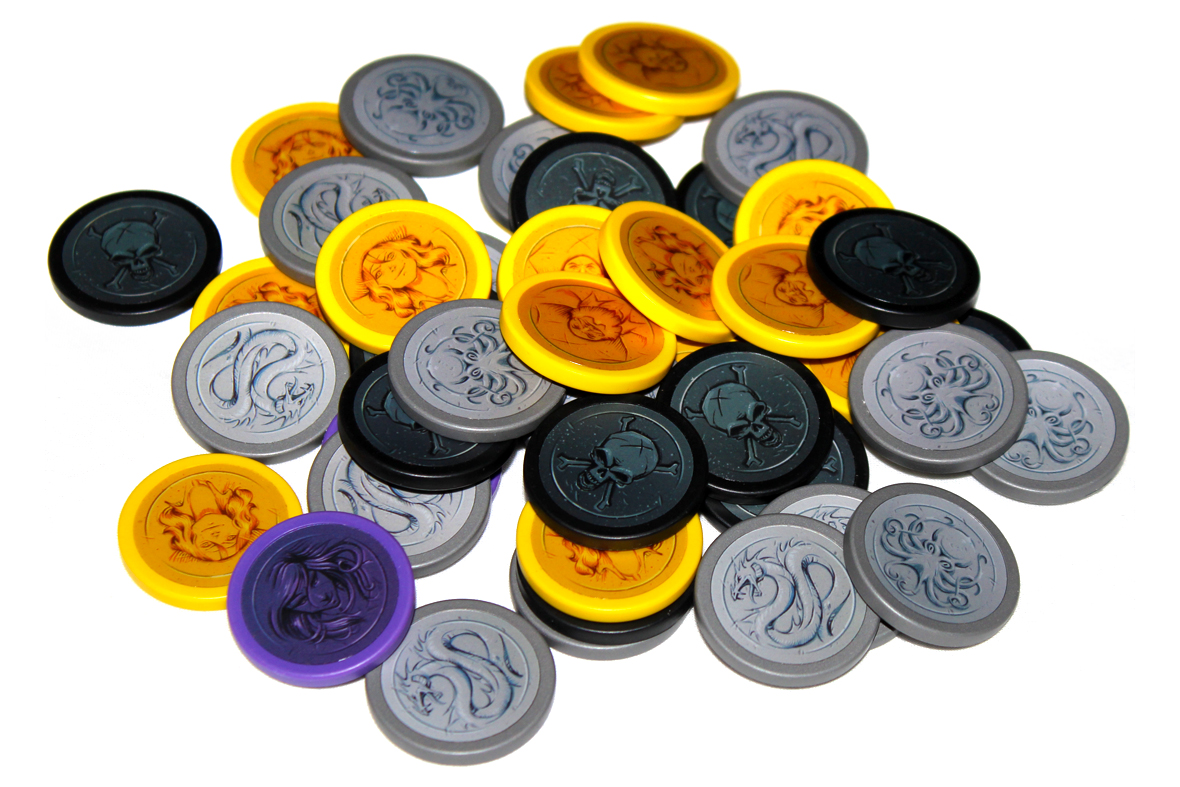 Give each player one Gold and one Silver to put in their bag, to start, and then prepare the remaining coins by player count:

Put those coins in the Treasure Bag: 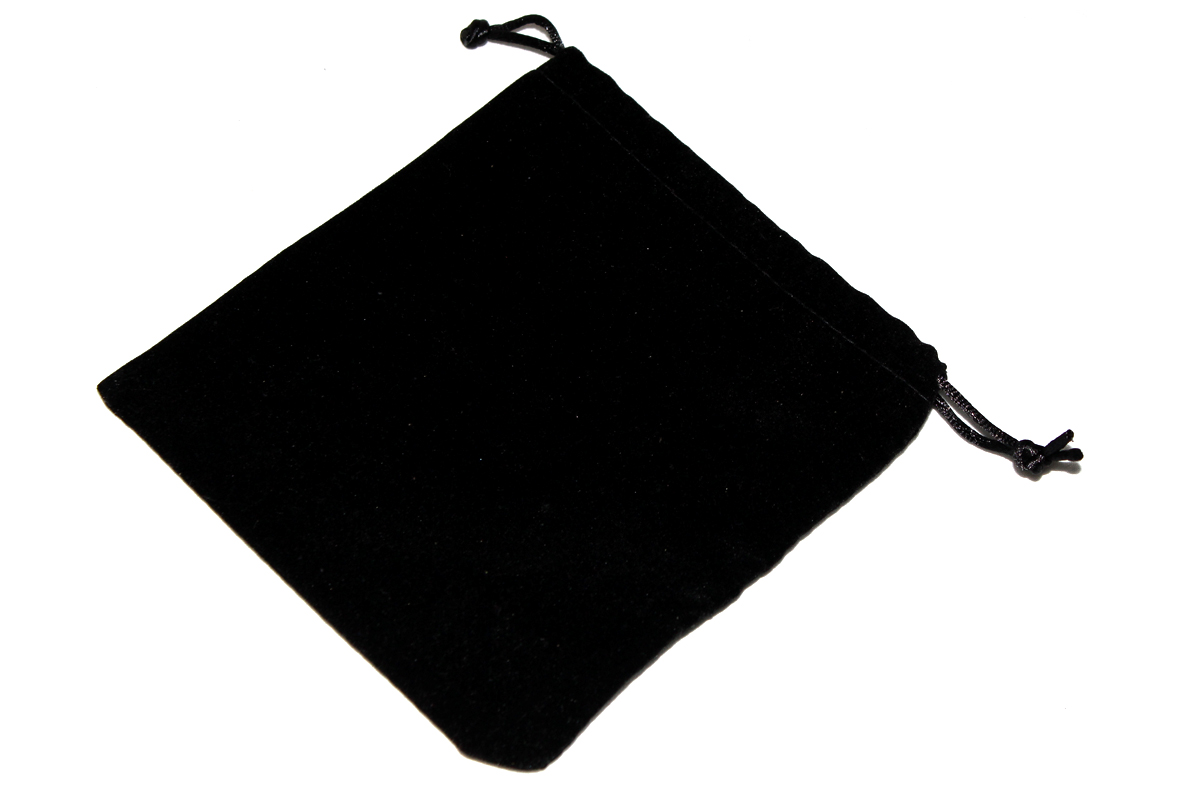 Have each player draw two coins randomly without showing other players and place the coins in their bag. You should be ready to start! 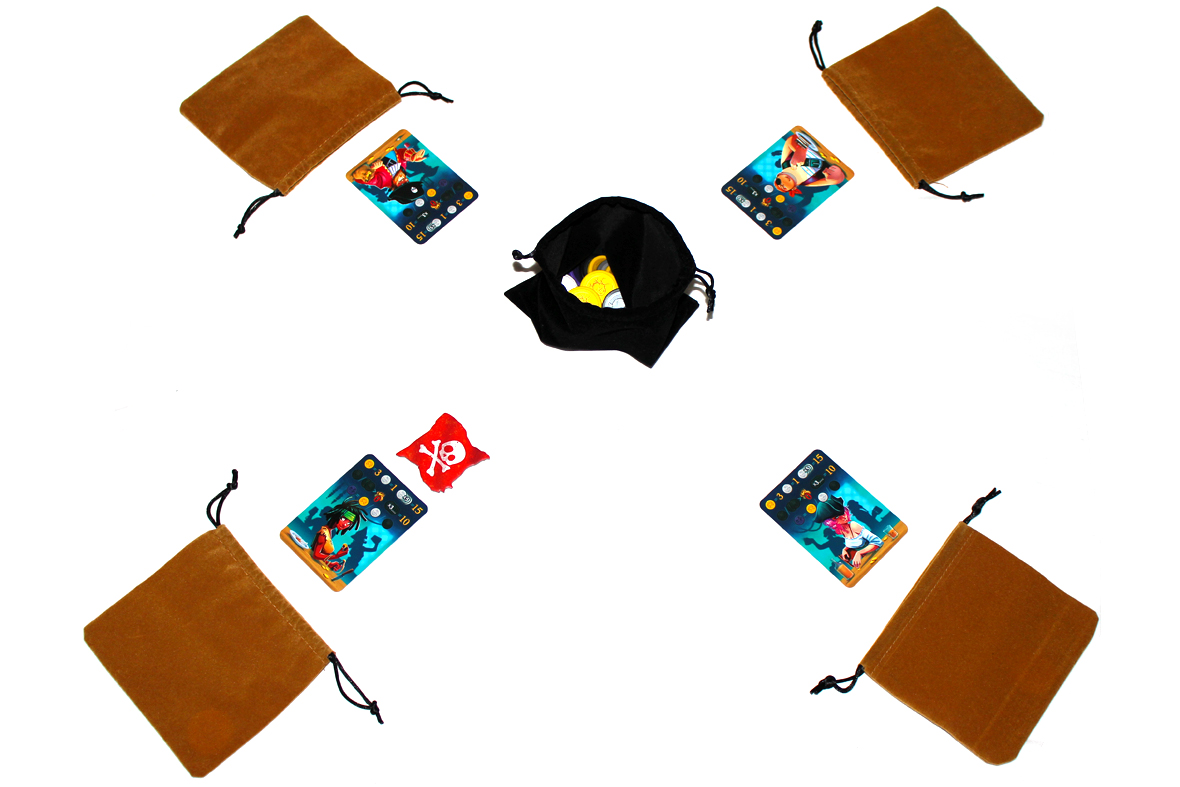 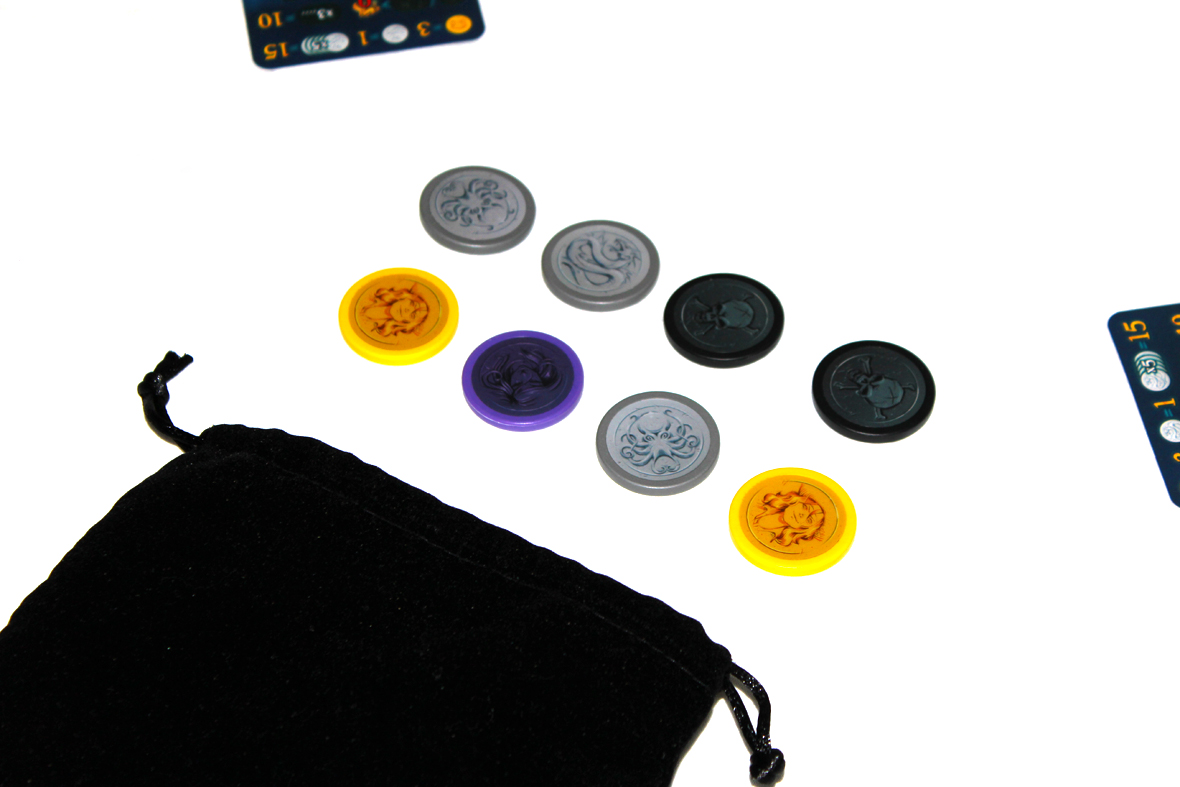 This one’s surprisingly straightforward. Basically, you’re pirates, trading coins and trying to keep the biggest bag of loot for yourself under the pretense of “fair trades”. No fair trades with a pirate, of course. Have the most money at the game’s end, and you win!

The game takes place over a number of rounds (one per player), and each player will go first once. Once every player has been the start player for a round, the game will end. During a round, however, there are three phases worth noting.

The Draft Phase is pretty simple. Draw two coins from the Treasure Bag per player, and lay them on the table. Each player takes one coin, starting with the start player and going clockwise. Then, starting with the player to the start player’s right and going counterclockwise, each player takes one additional coin. It’s a snake draft, if you’re familiar with that term. Place the drafted coins into your bag. 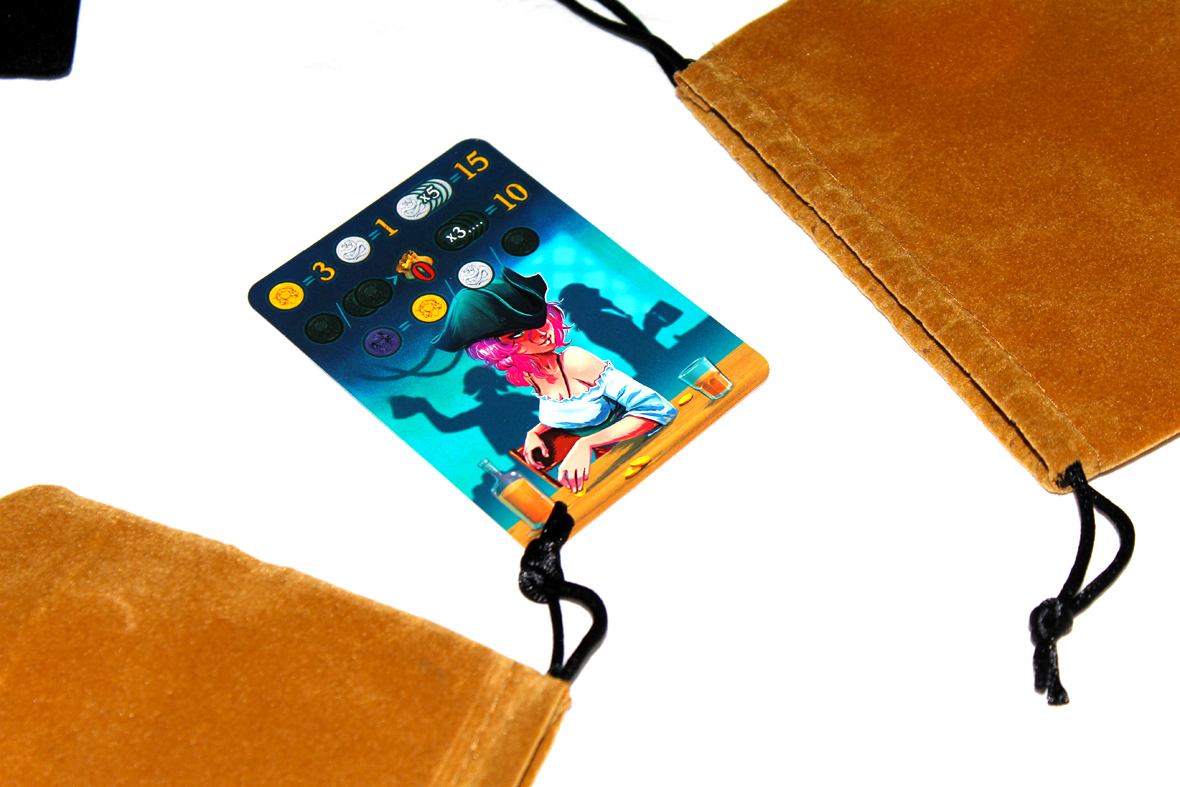 Here’s the interesting part of the game. Now, starting with the Start Player, each player must choose another player and demand that they swap loot bags. The other player may respond one of two ways:

Each player does this until all players have had a chance to pick a player to potentially swap with. Then, move on to the next phase.

During the Donate Phase, players must contribute back to the Treasure Bag for, uh, everyone’s welfare? Pirates are confusing. Every player must take one coin of their choice from their bag and return it to the Treasure Bag in the center without showing the other players. Once everyone has done this, the round ends. Pass the Start Player token to the next player on the left. 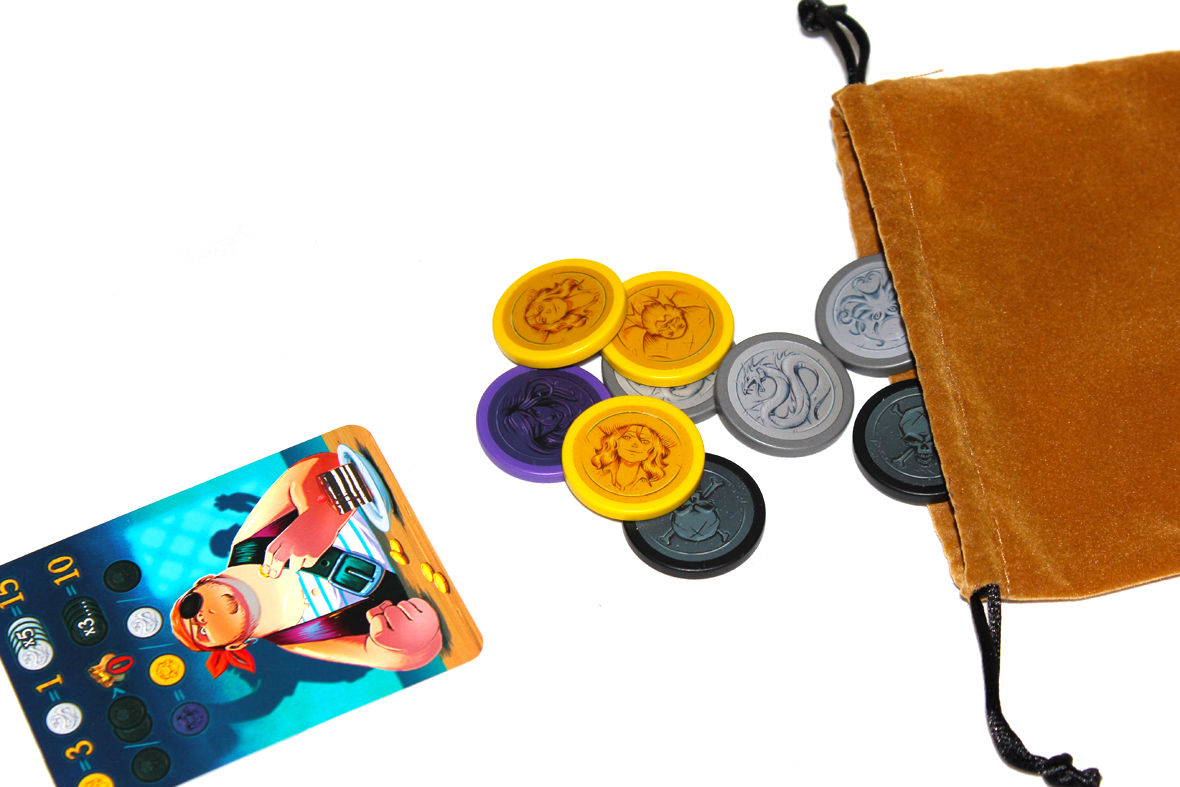 After the Start Player token is returned to the first player to be Start Player, the game ends. Empty your bags and tally up your scores:

The player with the most points wins! Any player who scored 0 points just earns the “oof, that’s unfortunate” prize.

Not much of one, honestly. There are just a few additional coins added to the game to accommodate the increase in players from four to five. I might recommend being a small bit sneakier, given that there’s now an extra player who potentially has their eyes on your bag. I haven’t noticed many problems changing between the player counts.

For interested parties, there’s also a three-player variant where you play against a secret fourth player, the Ghost of Davy Jones! Why he needs money is unclear, but, hey, he wants your treasure, so you’ll have to play him for it. The game scales appropriately, but the big difference is that Davy Jones always swaps. He also gets coins randomly from the bag instead of drafting / donating, so, gotta watch out for that. And, my favorite dummy player rule is in effect: Davy Jones can still win! If you’re looking to bring this game down to three players, it does work. I will say I prefer the chaos of higher-player count games to three, but, it’s still pretty fun no matter how many players you’ve got at the table.

Overall, I think No Swap, No Pay is a great game for opening a game night! I’m not sure I’d play it all night long, but it’s a great game to get players talking and lying and ribbing each other as they pass bags around. You learn names that way, you get surprises and betrayals, and it’s all pretty low-key, which I appreciate. The nice thing about these kinds of games is that while it can feel a bit luck-dependent (especially if you’re not engaging in the whole bluffing aspect), it runs quickly enough that half of the time it’s fun just to see who won. I’ve been trying to come up with a variant that includes a person’s name inside of their starter bag, just to see which player ended up with the “best” overall bag (more out of curiosity than anything else). But this has that same sort of whimsy that I expect from a good pirate-themed game. Jamaica, Extraordinary Adventures: Pirates!, Skull King, and Libertalia all do a good job of embodying the “anything can happen” sort of mood, and I think it works well for games where loot and plunder are your primary objectives. Like I said, this is probably the one I’d use to open up a game night; it would be even better if players got really into it (sort of like Dinosaur Tea Party where it’s better if everyone plays with Very Posh Accents, though I’d probably recommend against Posh for this particular gameplay experience). That’s a bit more group-dependent, though. Either way, if you’re looking for a fun and whimsical title for game night, don’t mind a bit of luck, and are willing to risk it all to score big, I’d definitely recommend No Swap, No Pay! I’ve had fun with it.